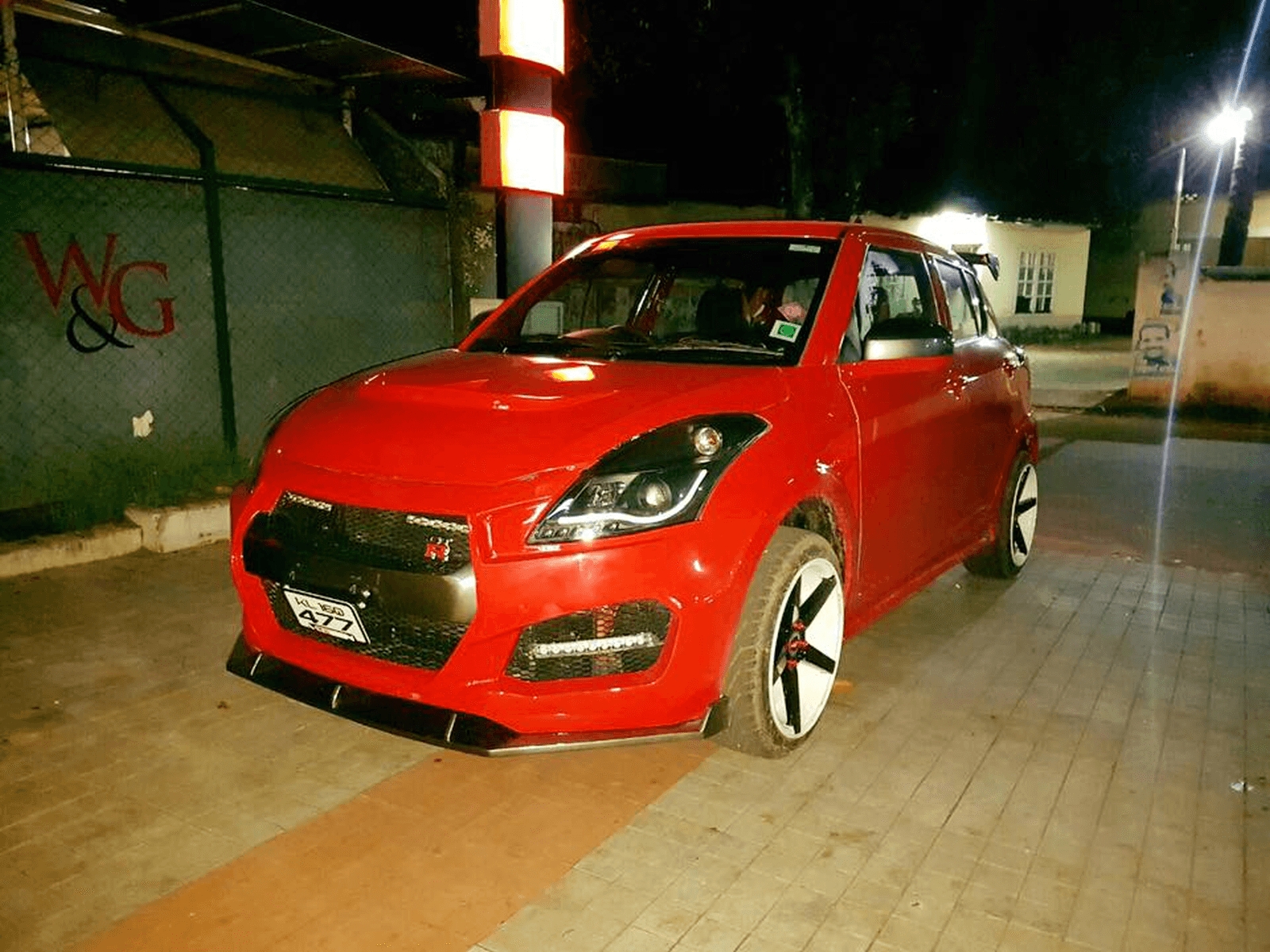 The 2016 Nissan GT-R was brought on to the Indian soil by the Japanese car-maker at this year’s Auto Expo that took place in the month of February. The mega event was just an introduction of the sensational machine in India and not a formal launch; well that’s a bummer! Speaking of another highly anticipated vehicle, the darling Swift is due for an major upgrade and test mules of the same have been spotted doing rounds in some European nations. While the Godzilla will likely be up for sale in India by September this year, the new-generation Swift is expected to be unveiled at the Paris Motor Show in October. Now, the reason we are talking about two world-apart machines is this OTT creation from the Kerala based Caddy Crewz team. 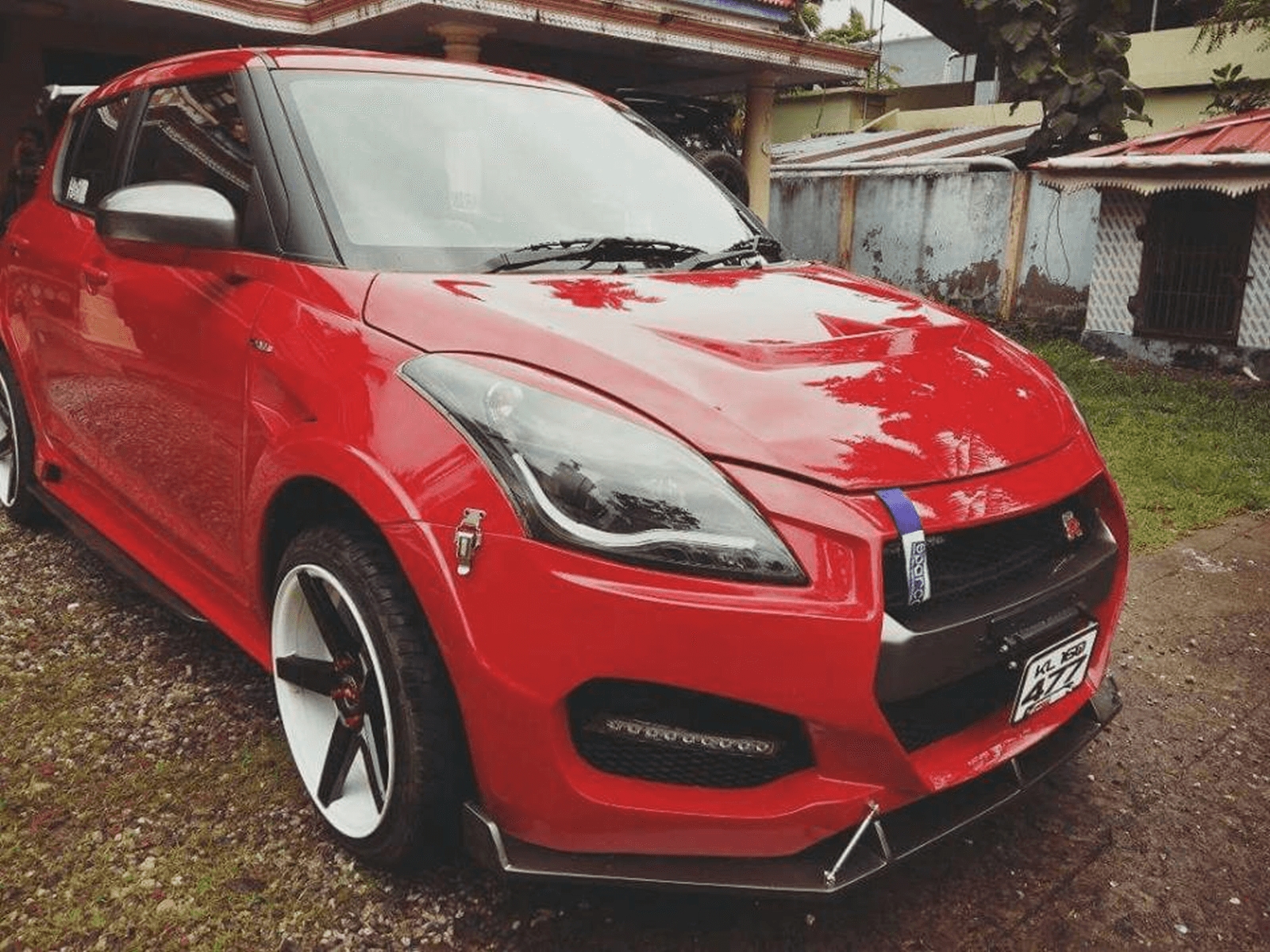 It seems that the team was too excited to wait till both the cars received their respective updates and fused bits of both the worlds to make the Maruti Suzuki Swift GT-R. For this creation the folks have used the Maruti Suzuki Swift as a mule and have tried built a GT-R around it for an enthusiast customer. It’s not a complete GT-R treatment top to bottom, but a few design bits and the bloody red body colour convey the efforts. 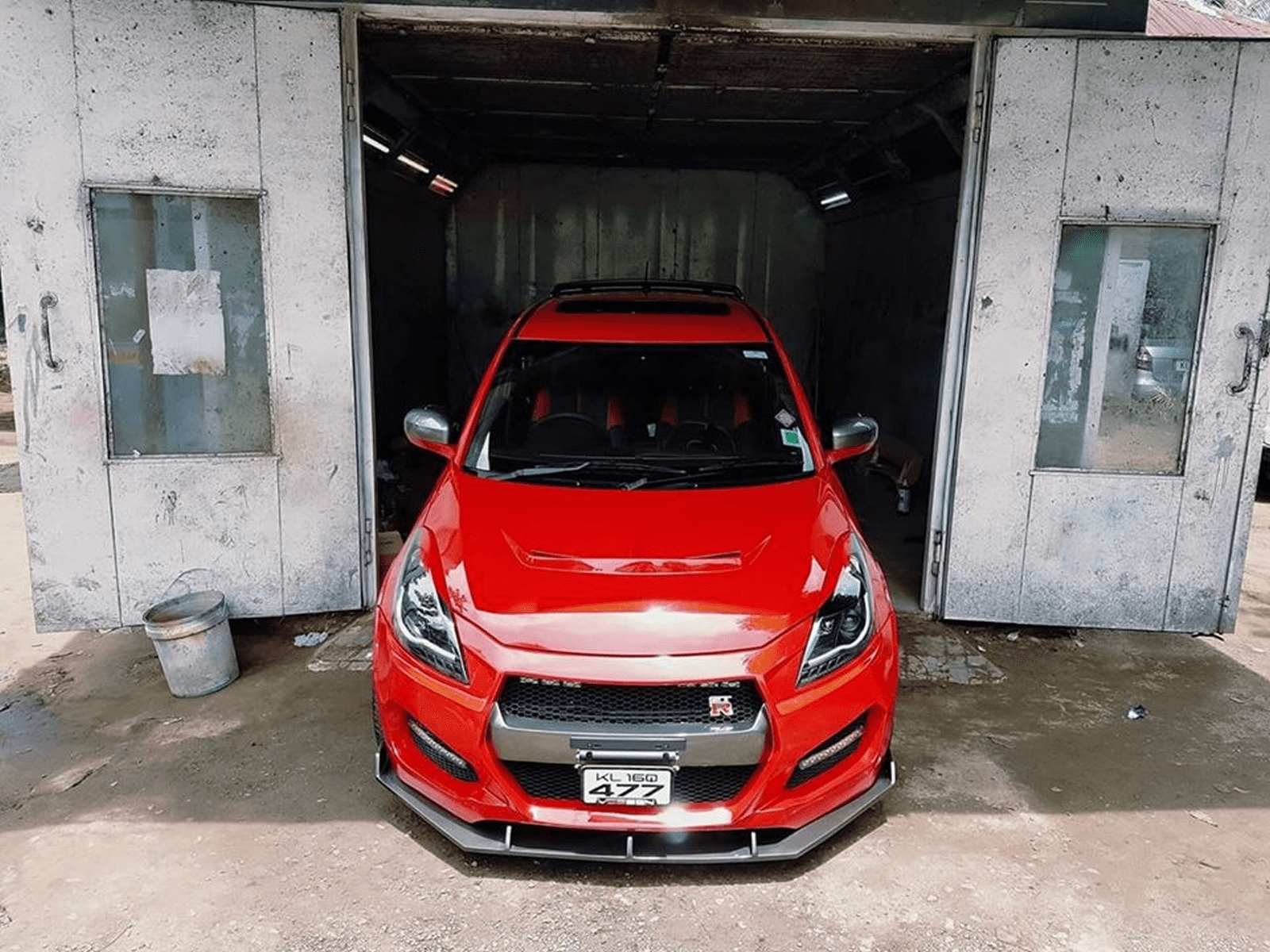 Starting off from the front fascia, the stock bumper has been replaced with a chunkier one with features lager air scoops on either side and is underlined with a one piece under lip. The front radiator grille and the airdam is merged and tries to imitate the signature Nissan GT-R snout. The new dark shaded headlight units house projector lights and DRLs. The custom made bonnet over the stock engine received an oddly placed hood scoop. Interestingly, the modifier’s team has actually put up the ‘GT-R’ badge on the front grille. 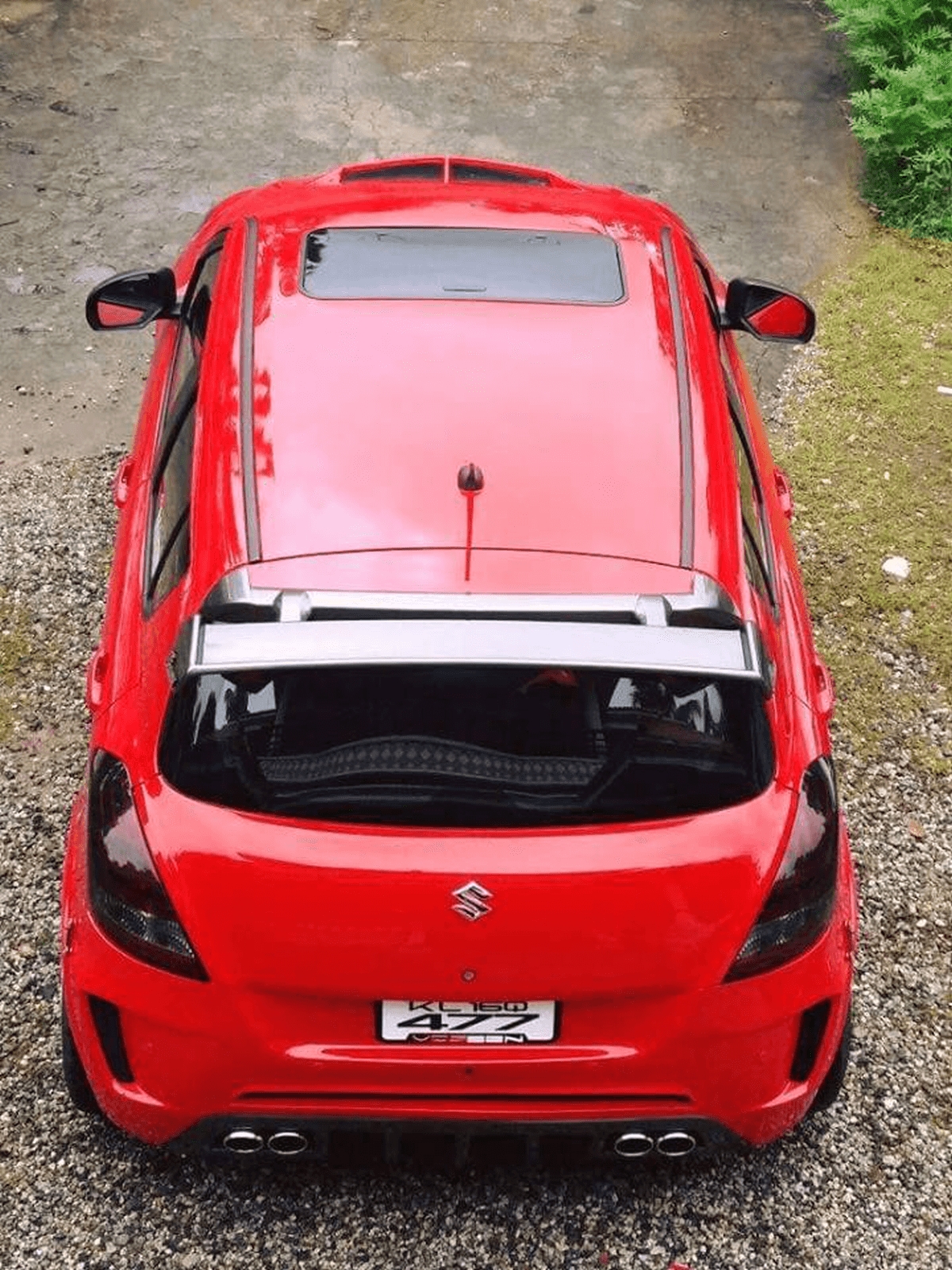 The doors are underlined with minimal side skirts and sills, while the ORVMs get a dual tone paint job. The modifiers have also added a sunroof on top. The GT-R Swift rides on wide tyres and 5-spoke wheel alloys that are fitted under wider wheel arches. The extended wheel arches also get air-vents on each side. The rear does not show any Nissan GT-R features but exhibits a bit of drama with a huge spoiler fitted on the boot-lid. Once again, there are air vents on either side of the rear bumper which is reworked with fake twin exhaust pipes on either side and a faux diffuser in between. 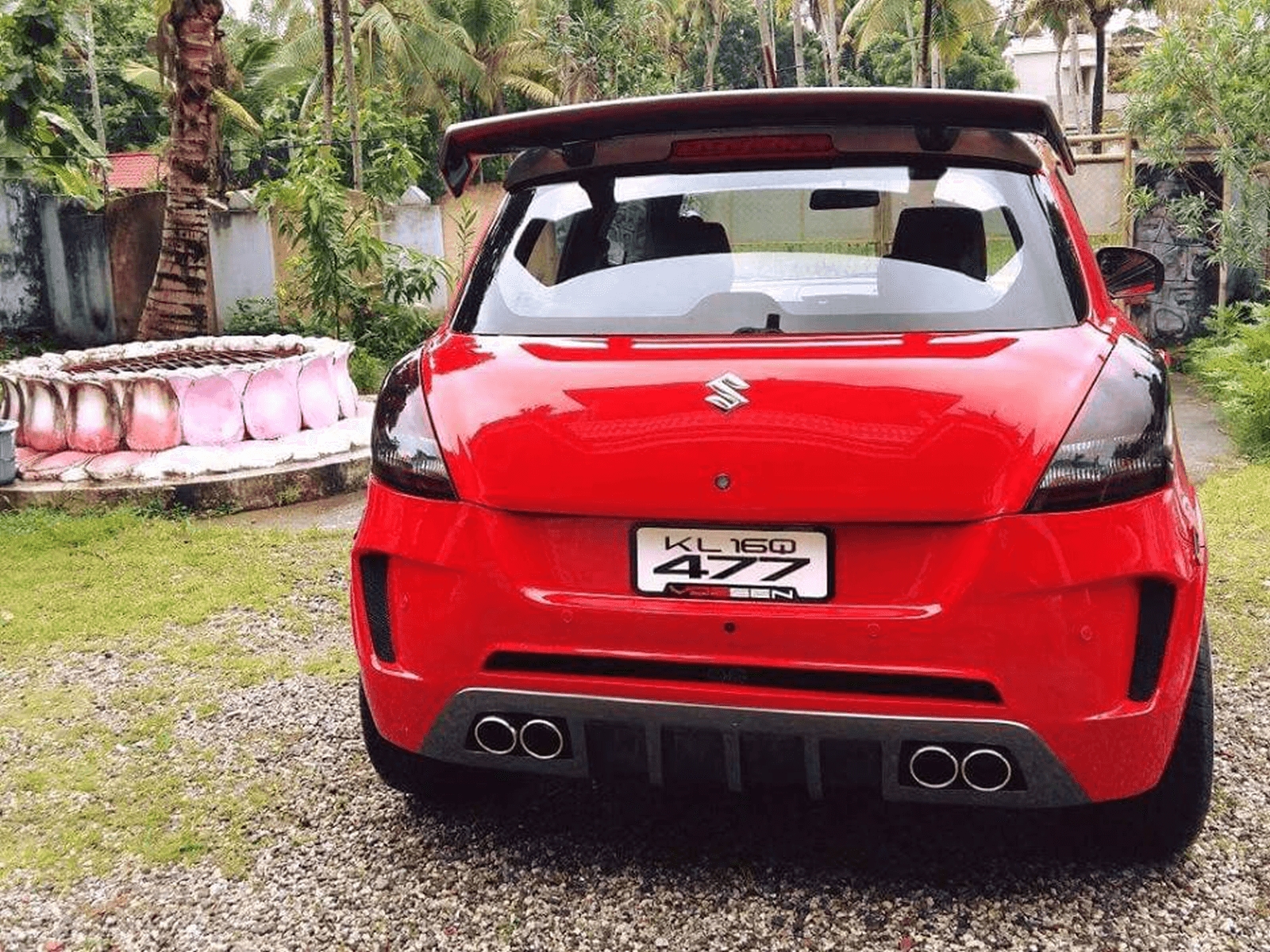 The interiors are also redone with components from Sparco, as we can also see a tag hanging out of the bonnet with the brand name on it.The engine details are not known, but we can assume that the stock setup remains unchanged. From the modifiers social channel page we have learnt that the whole mod-job costed around INR 3 Lakhs. In other news the 2017 Nissan GT-R debuted at the New York International Auto Show in March this year.

Here are a whole bunch of images of the Maruti Suzuki Swift GT-R below. Let us know what you think about this whacky creation!