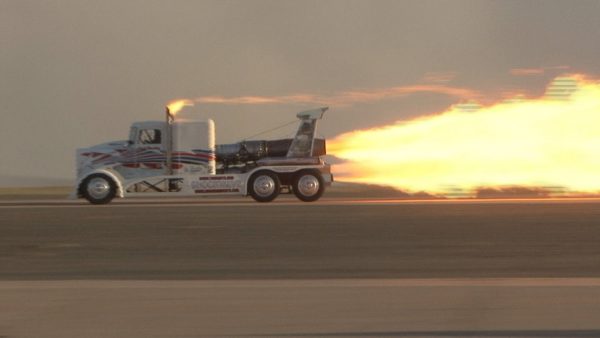 How many trucks do you know that can go any faster than a breeze of wind? Well, don’t fret, because the jet-powered Shockwave is here to change your opinion on trucks, forever. As you might have picked up from the name, this is no ordinary truck. The only two normal truck-like parts on the Shockwave, are the front section (which is from a 1985 Peterbilt cab) and the tyres. However, these ‘normal’ truck tyres have been on a diet and hence, have lost nearly 40 kg in weight from the treads. The reason for that? The Shockwave can reach speeds of over 500 km/h (312 mph) and heavy tyres can literally shred themselves at those colossal speeds.

The Shockwave has 3 Pratt & Whitney J34-48 turbojet engines. Together, these engines develop 19,000 lbs of thrust and in horsepower terms, that’s 36,000 fiery horses. The truck weighs just over 3-tonnes, which is feather weight for a truck. Add those massive jet engines into the mix and what you get, is a truck that bludgeons the laws of aerodynamics, almost spits on its face. The jet-powered Shockwave, holds the Guinness Book of World Records for the fastest jet-powered truck on the planet! Its top speed? A scarcely believable 601.6 km/h (376 mph)! That means this beast of a thing, covers the quarter-mile run in just over 6 seconds and at over 409 km/h (256 mph). And you thought that the Bugatti Veyron was fast. 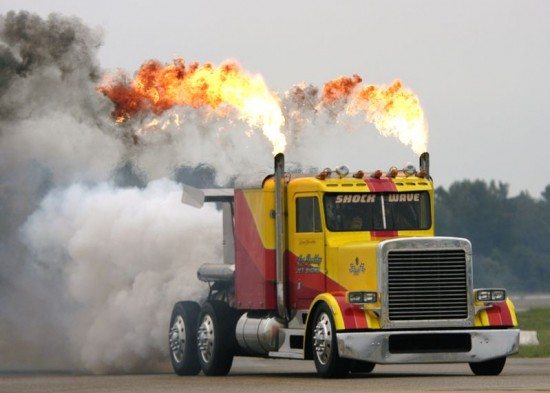 What a beast of a machine, this!

For those who ask, “lekin average kitna deti he?” Well, this thing is propelled by three jet engines, not a 1-litre turbo diesel motor. During its high speed run, the Shockwave can consume over 1500 litres of fuel in under 2 km. However, it can only hold 720 litres, out of which it burns 0ver 680 litres in each of its performance. Do we care about that? No. Is it interesting? Hell, yeah! Another interesting fact for you guys; The driver experiences positive 6Gs of punishment at launch, and negative 9Gs of crushing deceleration force when the parachutes are deployed! So this truck, is not for the faint of heart. Anyway, watch the video and make sure your parents are not in the room, because this is gonna be LOUD!

P. S. Forward to 1:47 for the drag, or you could just watch the whole thing and enjoy.