An individual group of 15 bikers from Hohenhaslach, Germany, embarked upon Royal Enfield Classics to ride across the Himalayas, in a bid to discover the ‘Incredible India’. 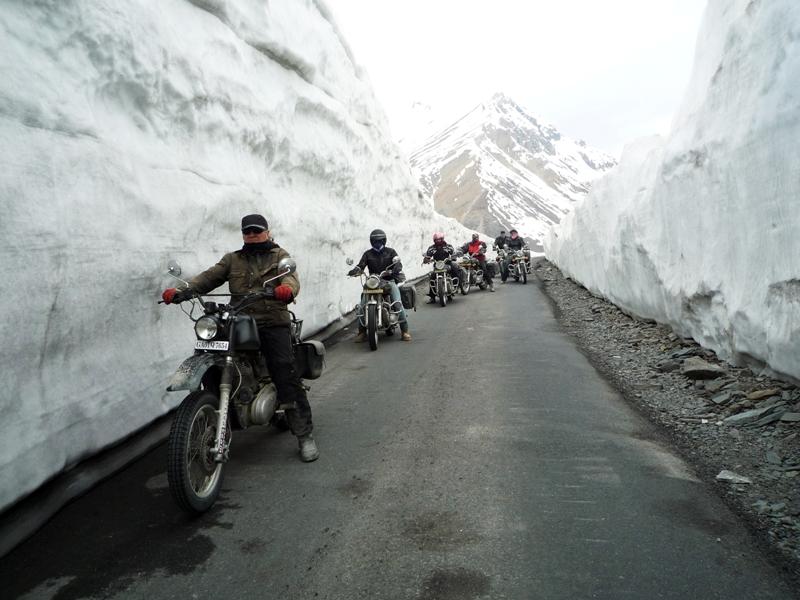 Back in 2001, few of my friends and I embarked upon a bike tour to Leh-Ladakh and Spiti valley, and explored some of the most enchanted territories. The memories and experience of that year compelled me to once again aboard a bike tour and conquer some of the highest passes for automobiles. Its just took a moment to find a group of ten bikers from the biker club, in my home town Hohenhaslach (close to Stuttgart-Germany) who were keen to participate. From there on, we started planning this great adventure trip. Once back in India, I approached Peter dos Santos from Classic Bike Organisation who helped in chalking out the itinerary besides providing us with 15 Royal Enfield Bullets. He was also the official tour guide along with Tiziana, a charming Dutch lady. We were also accompanied by Pappu and Ramesh, the back up team, who took great care of our bikes and fixed minor faults in minutes.The trip kick started on the 26th of June, 2009 at the Delhi airport where Peter welcomed the group of 15 bikers. We were briefed about the tour, the road conditions and traffic rules in India enroute our journey by a bus from Delhi to Nagar, close to Manali. To get acquainted with the machines, we rode down the Kullu valley along the Beas River. After a quick visit to the famous 17th century Nagar castle where we were welcomed with a splendid view, we retired for the day. Next day we started our tour with a short ride to Manali. Here, we got a chance to pick up all the necessities we would require on the trip until we reached Leh.

The next day, had us all excited and eager to cross our first pass, the Rohtang, at an altitude of 4000m. Having climbed, half way we came to a stop due to poor road condition and road repair work which reduced the traffic to only one lane. We had to overtake a string of vehicles. It seemed terrible initially, with broken roads and steep slopes on the valley side but it got easier once we got the hang of the machines. Soon we reached the top, and stopped for a cuppa chai. The traffic, hereafter eased out, as we descended Rohtang and the first sight of the mighty Himalayas greeted us. Amidst, concentrating on riding our bikes on broken roads and being welcomed by amazing landscapes at every corner, we finally reached our pit stop in Keylong. Next morning, we started our day at 9 am, and rode along the Bhaga River, Suraj Tal and scaled Baralach La, at 4,892 mm altitude. This was the first time on the trip we experienced freezing climatic conditions and were relieved upon reaching the camp close to Sarchu. After a long session of story telling and sharing biking experiences with the warm sun setting upon us, it was time for dinner. The temperatures during the night time dropped even further making it impossible for anyone of us to sleep peacefully. Even mineral water we had with us in the tent was partly frozen until the next morning. 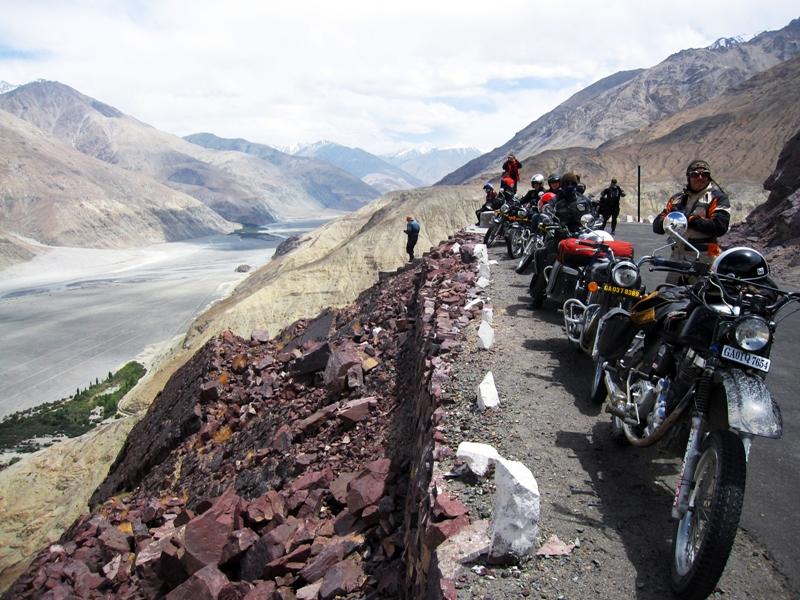 Riders, taking a moment to capture the scenic landscapes, which changes at every corner 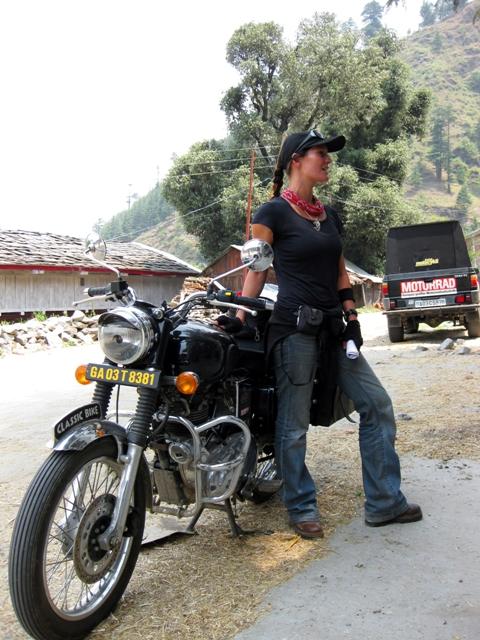 Acclaiming the highest motorable road in the world at an alttitude of 5359 meters, is always going to be something to remember

The next day, we conquered the Lachung La, at 5,065 m and the Tanglang La, at 5.360 m. The road was nothing else, but gravel and loose soil. The NH1 was a mere combination of rocks, holes, sand,and water crossings. Upon reaching the camp site, Rumtse, most of us were complaining of body pain and exhaustion. Acute Mountain Sickness (AMS) got the better of two riders and they had to continue the rest of the journey in the back-up vehicle. Next day, we reached our awaited destination- Leh. It was time for a much needed warm shower, a few drinks and plenty of rest to beat the exhaustion of riding over a week. Leh, the capital of Ladakh (La stands for pass and dak for many) is situated between the two highest mountain ranges in the world, the Himalayan range in the south and the Karakoram Range in the north. One of the remote places in the world, but never isolated, this trans-Himalayan land is a repository of Buddhist culture and is enriched with beautiful monasteries and holds immemorial treasures like frescoes, images and rare manuscripts.

The first trip form Leh led us to the Thiksey monastery, situated on the banks of the Indus River. With ten temples and a nunney within it, this picturesque Gompa is a twelve storeyed building, built in the 15th century. The Lamayuru and the Hemis are other two popular monasteries around this region. The following day we were all charged to acclaim the highest memorable road in the world, the Khardung La. The route is demanding, especially the last few kilometers to the top. A marvelous view from the pass surveys an entire length of the Indus Valley in the south and a magnificent panorama of snow clad peaks. From there on, we started descending into the Nubra valley. Passing the night partly in a deluxe tent camp we made our way back to Khardung-La the next day. Once back to Leh we left to enter the Zanskar valley, known as a land of religion where amazing old gompas were set in huge caves high up on a mountainside, approachable only by foot. After visiting many more such monasteries, we headed to explore the famous Ladakh markets and enjoyed some of the authentic local food preparations. We eventually left Leh by flight on 10th of July to Delhi, taking back with us some thrilling experiences, new stories to share with loved ones and a new found perspective towards life and the sport of motorcycling. I would like to take a moment here and thank all the members of the crew for being there with us in our endeavor of discovering the ‘Incredible India.’ 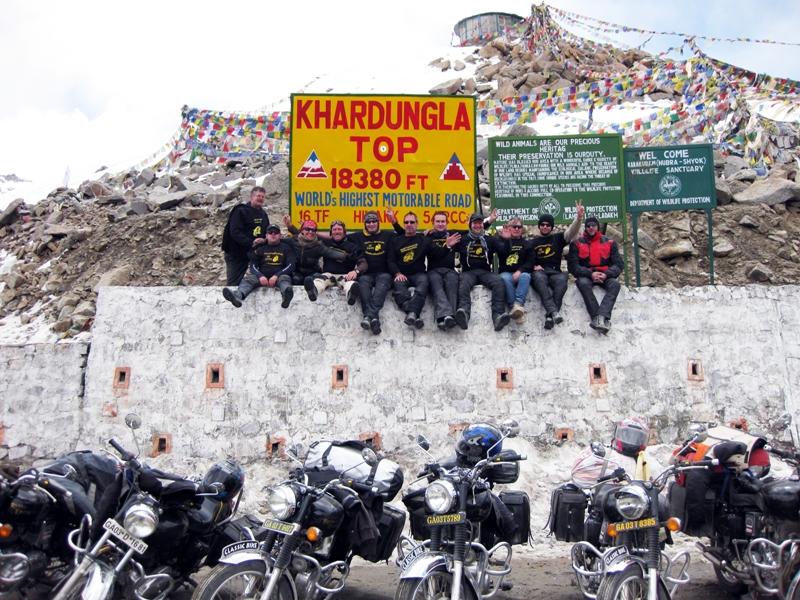