Having swapped with my teammate who had entered into the pits after his 15+-minute-long stint, it was my first lap out of the pits. On the uphill exit out of the second corner at the Kari Motor Speedway, the brand new, race-spec Suzuki Gixxer SF 250 would dart out with its front wheel above the ground, hit its limiter, and the clip ons would do a little jiggle once the front Metzeler M7 landed back on upshift. It happened every single time for 10 laps as I asked my desk job body to suddenly transform and act athletic throughout the course. Fueled by adrenaline and the light breakfast I fed it with in the morning, it obliged, but then, for the next four laps until the end of the session, it jumped off a cliff. 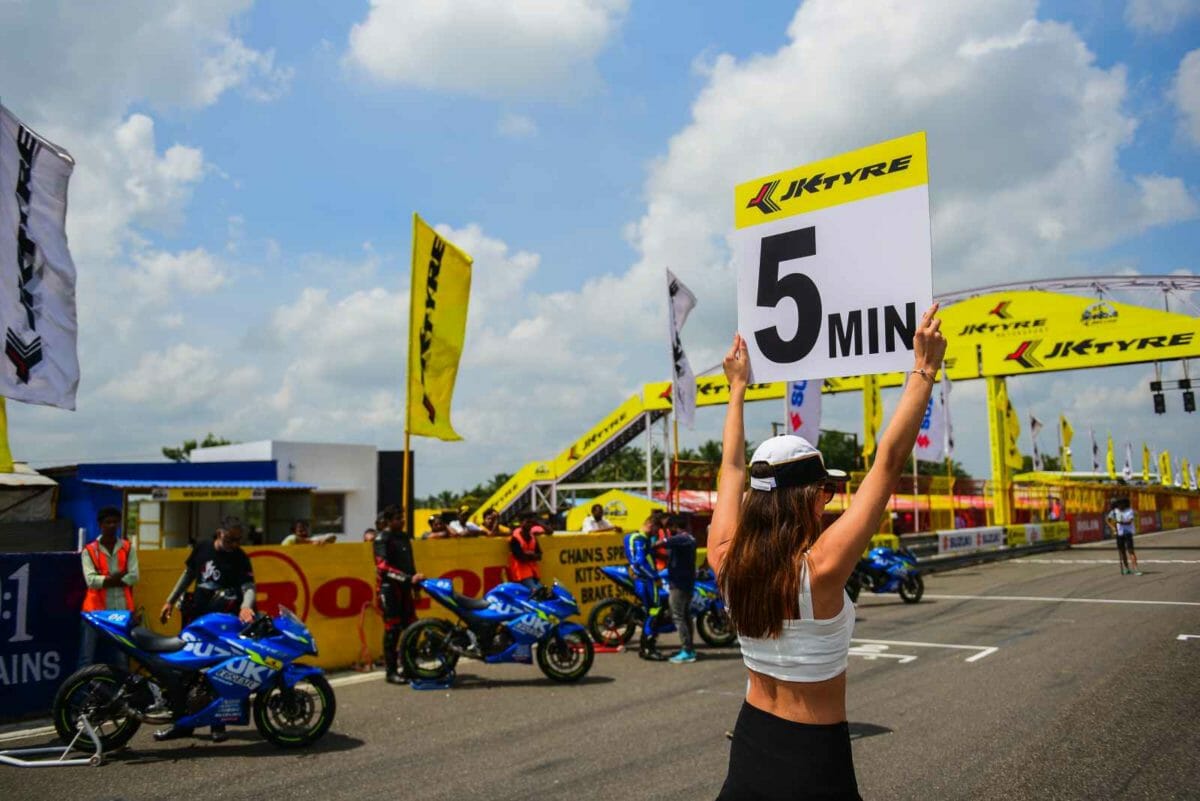 The front-wheel no longer did its thing as I took it easy, my body shifted its position like a sloth during corner-to-corner transitions, and the hot day and my lower than average levels of fitness had turned my jelly-like thigh muscles into solid rock, within minutes. My boiling head inside the helmet almost wanted to blow the helmet off to release some steam and then all of a sudden, red flags were waved as the 40-minute-long race had come to an end. 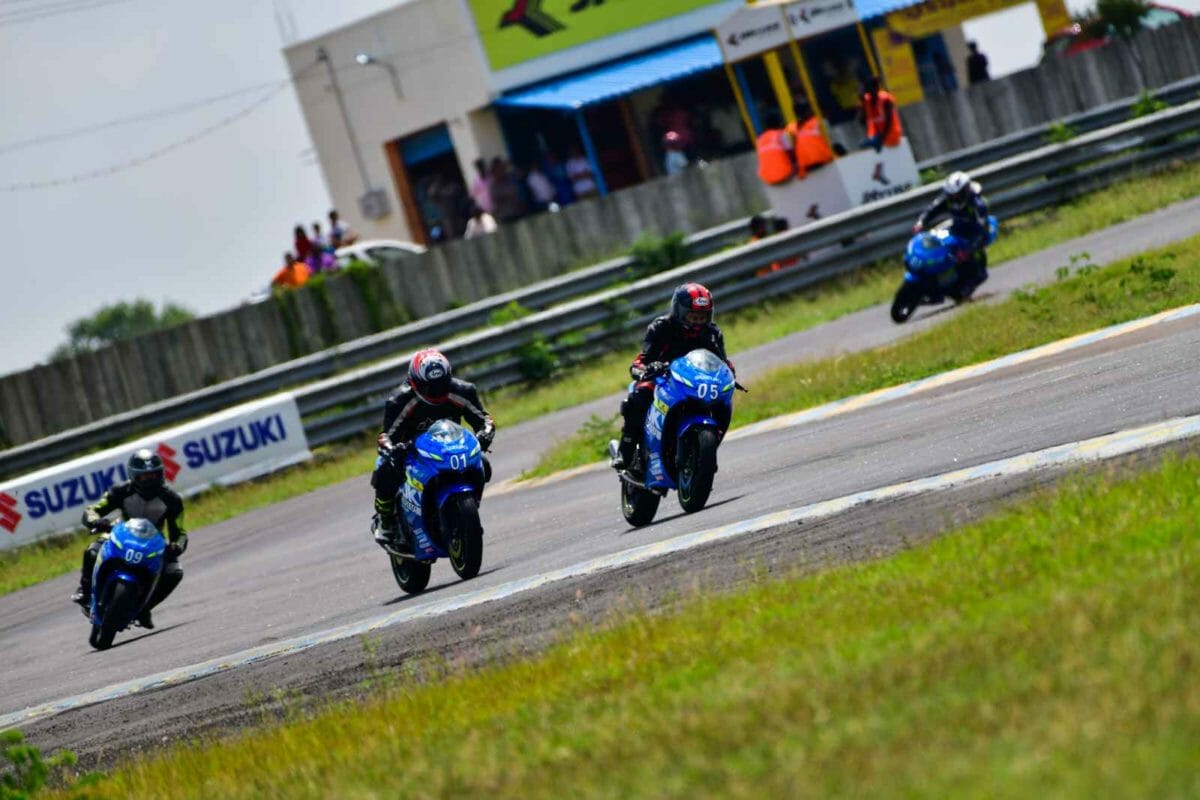 The Suzuki Gixxer Endurance race for the Media fraternity this year was originally supposed to be a 75-minute-long affair, where a two-rider team would share one motorcycle and go around the track to cover maximum distance. During this, each rider from the squad was required to complete a stint with a pre-set minimum duration, before he could come into the pits and swap. If the rider who was out, came in before dialling the minimum time or exceeded the maximum time allowed for one member of the team, the squad would be disqualified. Considering the hot conditions and how participants had fared during the previous year’s event, the organisers thought it would be best to curtail the session from 75 to 40 minutes. 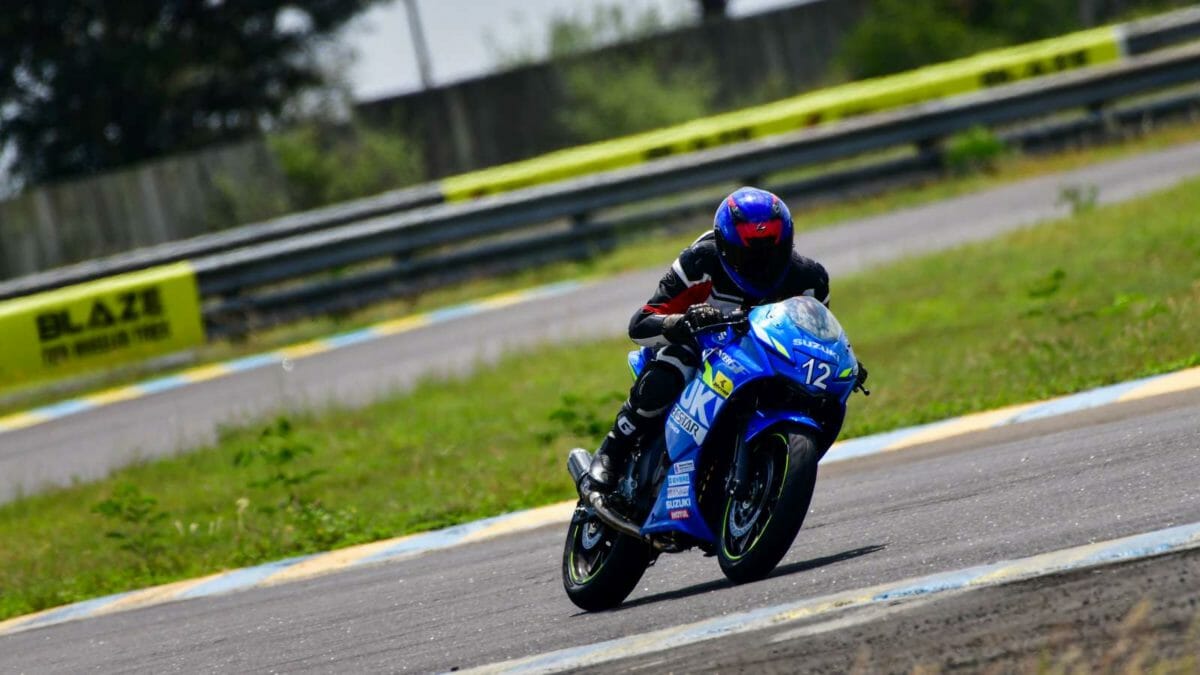 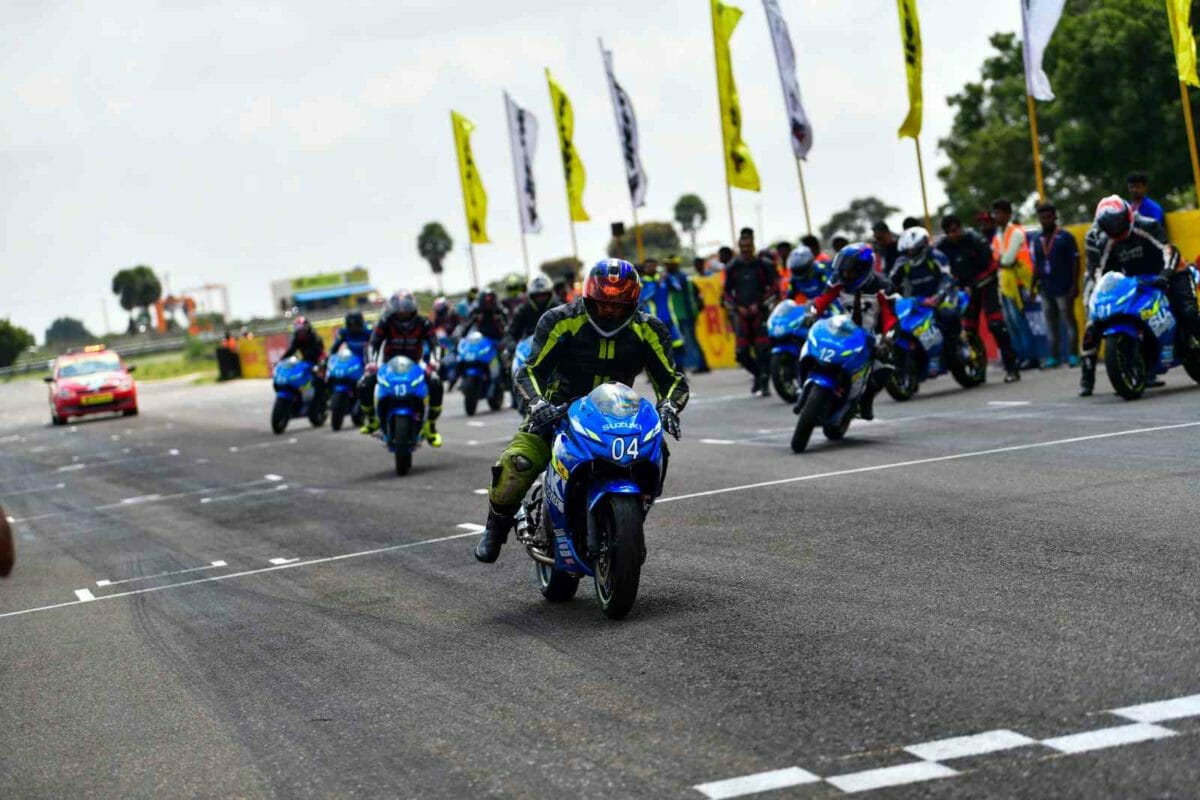 A chit system decided who got paired with whom and the combined fastest lap time of those two riders decided the two-member squad’s grid position for the race on Sunday. My teammate and I would start 4th for the race, where, in typical Endurance Race style, bikes were lined up perpendicular to the circuit before the start-finish line, according to qualifying time. The rider heading out for the first stint would run from the other side, while his teammate would hold the bike, for him to come running, hop on, push the starter and set off. 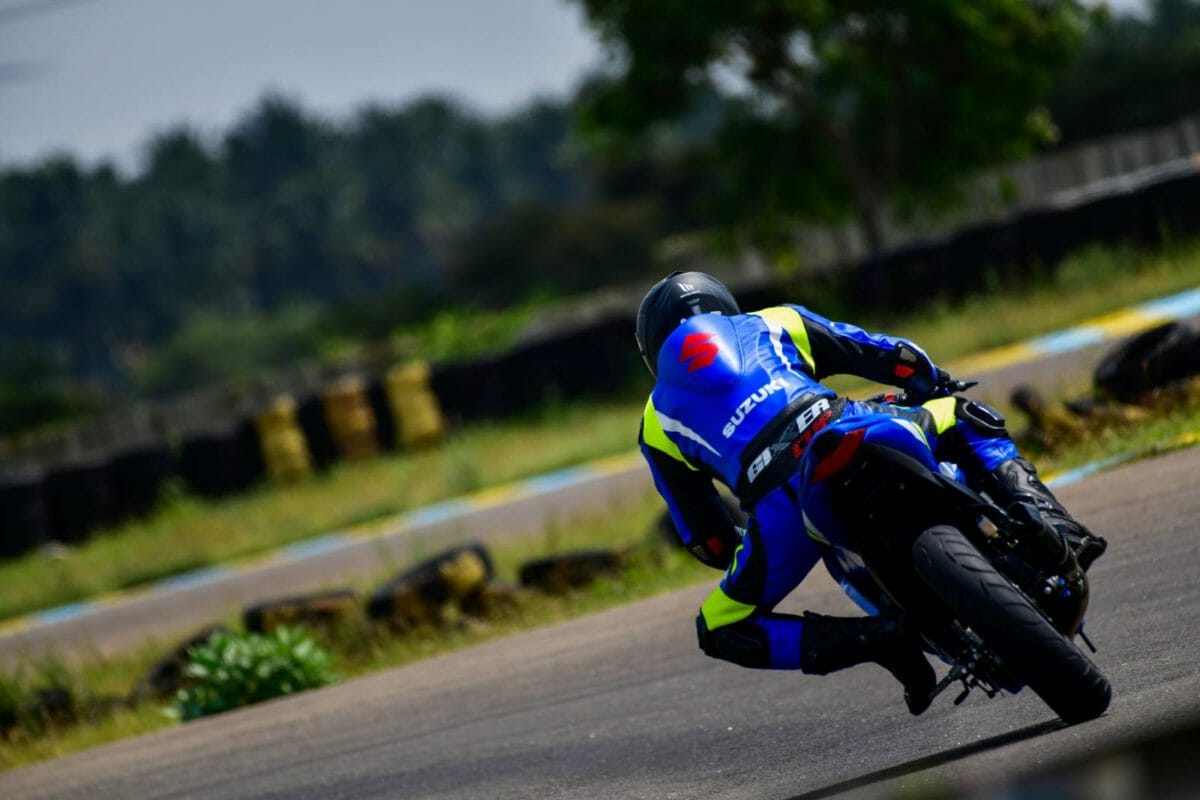 With the first 13 riders now out on the circuit, each one of them had to clock a minimum of 14 minutes for the session or a maximum of 26, before a swap could happen. Failing to adhere to these rules would mean disqualification. In the meanwhile, the second set of riders had to wait at the end of pit lane where the swap would happen and had to check the clock to time the rider change according to individual strategies. 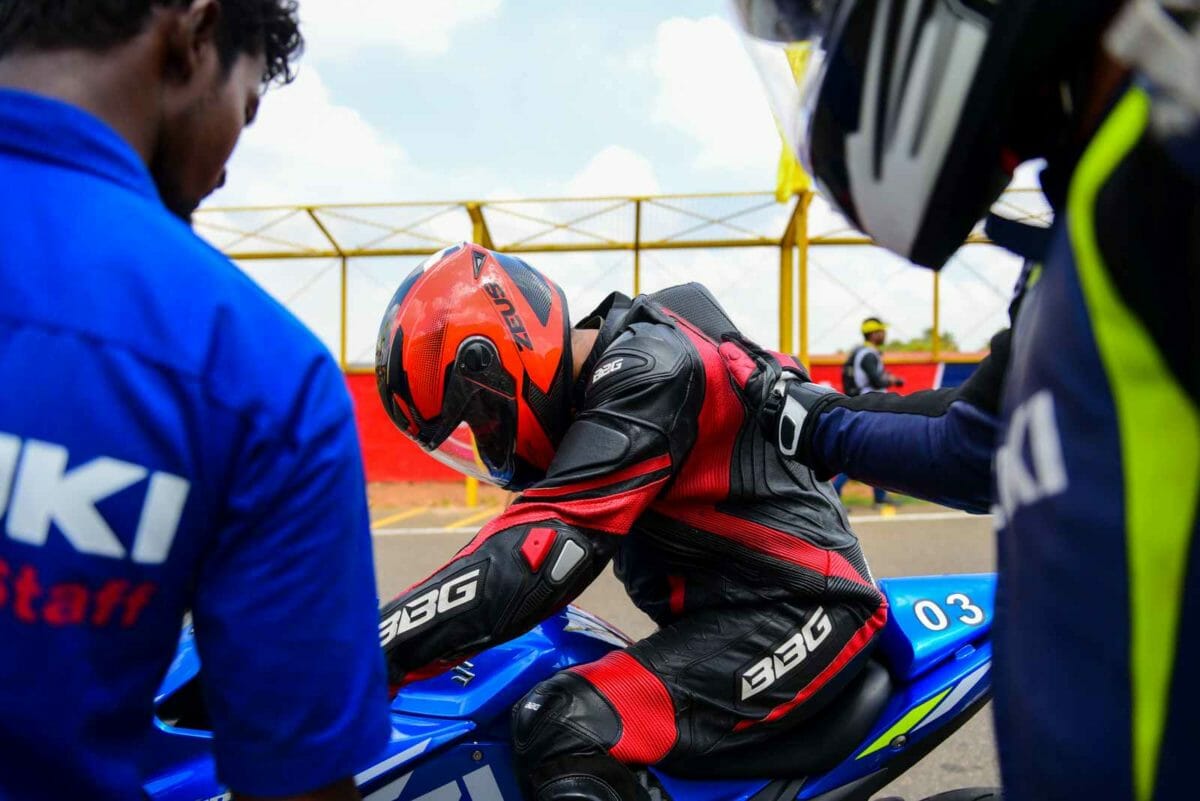 Once the first 16 minutes were up, I asked the marshal standing with boards for each bike number to ask my teammate to enter the pits. Having clocked 12 laps, my partner ensured he respected the pit lane speed limit as he rolled in, he hopped off, and I hopped on to take it till the end of the race. 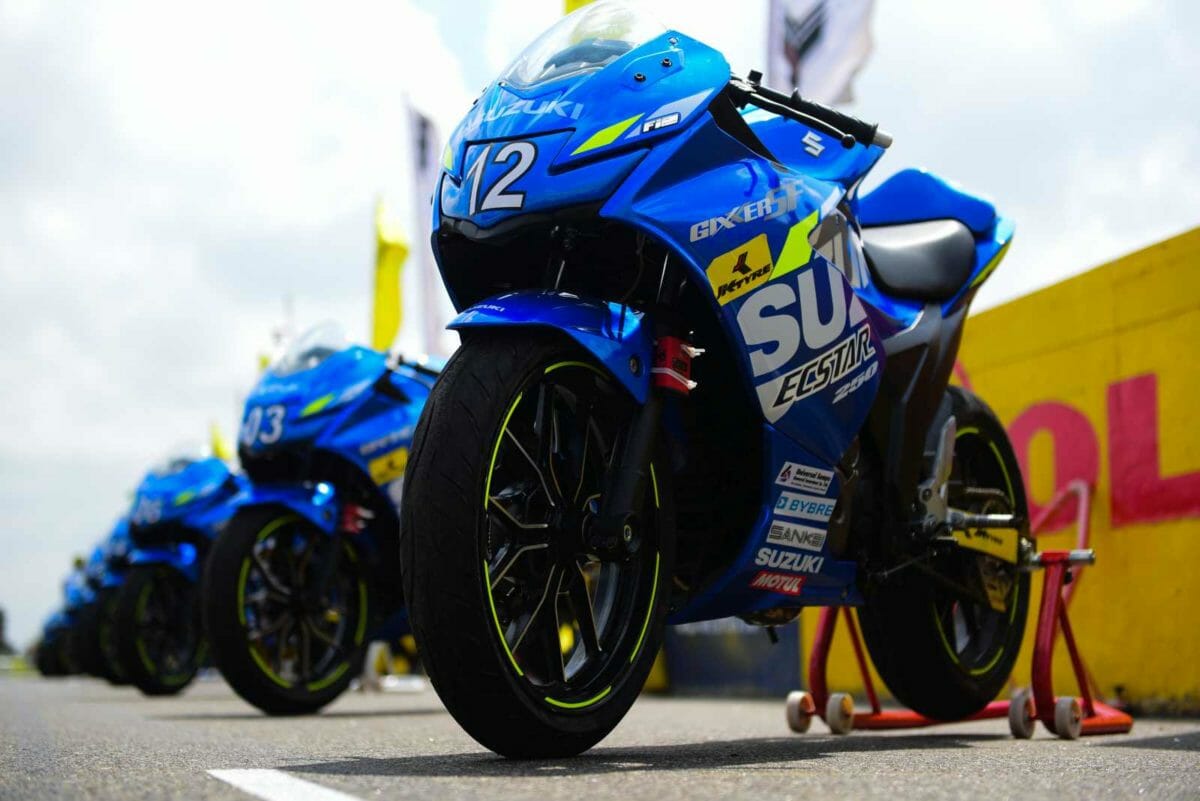 With its dropped clip ons set to be low and the race-spec pegs set ideally, the track-only Gixxer 250 SF felt like a natural racer. There was ample space in the saddle for even a 6 footer like me to move around and the bike provided a natural position to go racing. Fitted with a factory-built custom exhaust, adjustable front forks, Metzeler M7 tyres and a rear cowl which replaced the pillion seat, a considerable amount of weight was shaved as even the headlights were deleted. The motor was left to its stock tune although it was made to breathe more freely, which resulted in a power gain of about 2 – 3 PS. The engineers at Suzuki were given just 45 days prior to this event to build the bike, and we were the first ones to take it out on the track. 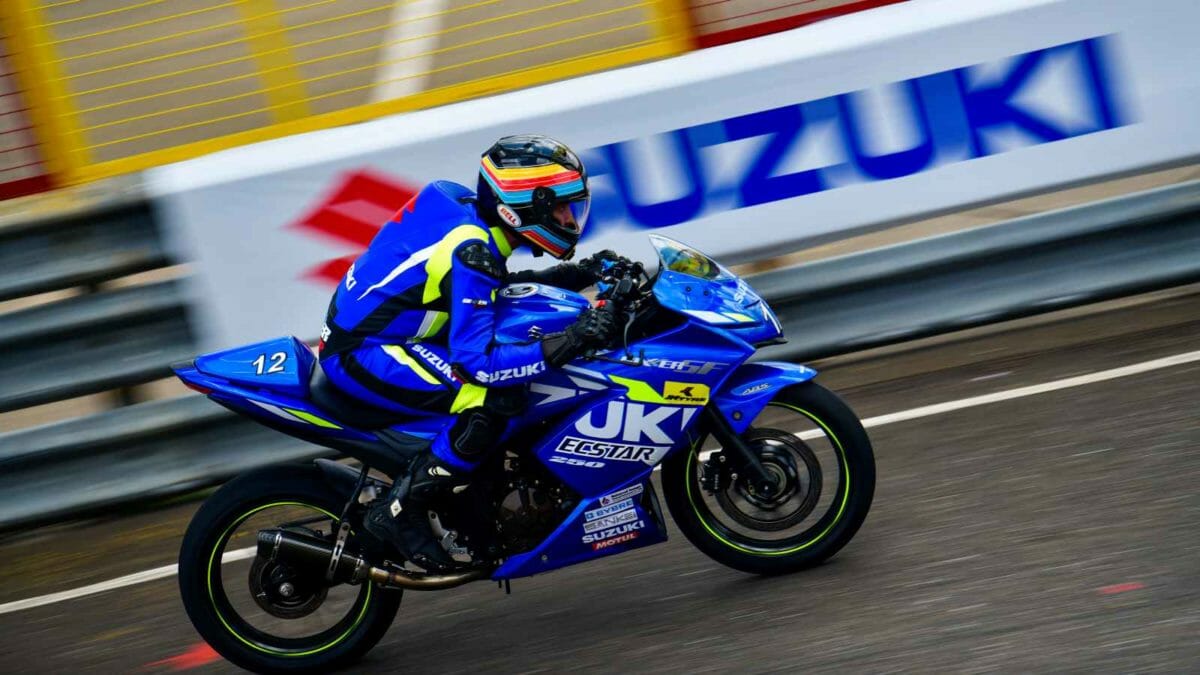 On Kari’s main straight, upshifting through the sweet and smooth gearbox without rolling off the throttle, made the quarter-litre machine hit an indicated 155 km/h on the speedometer, where for the last 50 metres or so before the braking point, the bike would hit its limiter in 6th. In-gear acceleration was really strong too, where the motor eagerly ran towards its limiter in every gear. The brand new bike’s front brakes felt suddenly too sharp once the lever had travelled a particular distance, which made me take some time to find my braking points. Even without a complex chassis, the Gixxer 250 SF felt brilliantly composed through sweeping corners and was pretty quick to change directions too when the turn-in had to be quick and in succession. It was a forgiving bike, where the Metzelers’ profile and grip, the predictable and smooth, yet, quick and crisp power delivery and the roomy saddle played a big part in bestowing confidence even in a rider like me, who had gotten onto a motorcycle after a long time and straightaway went racing. 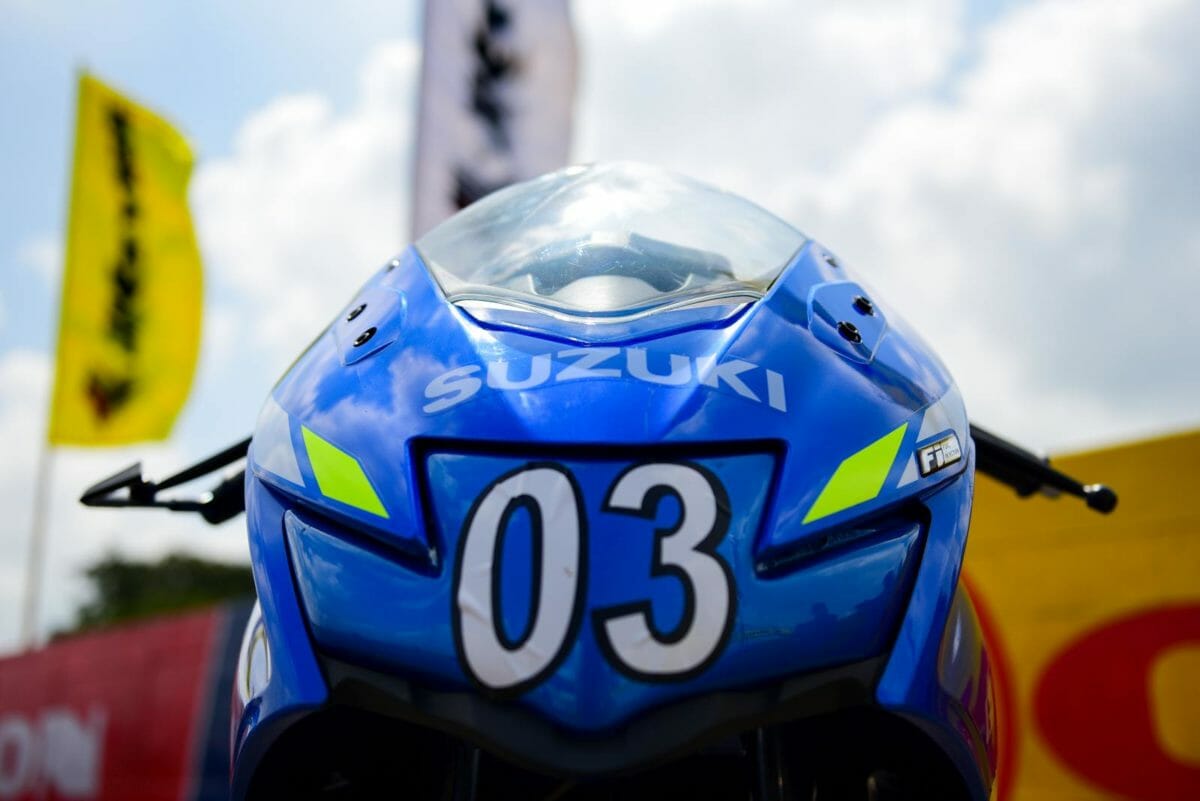 After the first few laps, since my physical state was still strong, I was getting a hang of things and was turning up the wick, lap after lap. Having set a personal fastest time of 1:30 during qualifying, I knew I was going considerably faster during the race and the bike’s steady nature was playing a big part in turning up my level of confidence. But the entire effort peaked out after 10 laps and then it was just a physical freefall. Which was a shame really because had I been fitter, the fun had just begun. At the end of it all, the winning duo had lapped the circuit 27 times, while we managed to do one lap less and finished 5th among 13 teams. 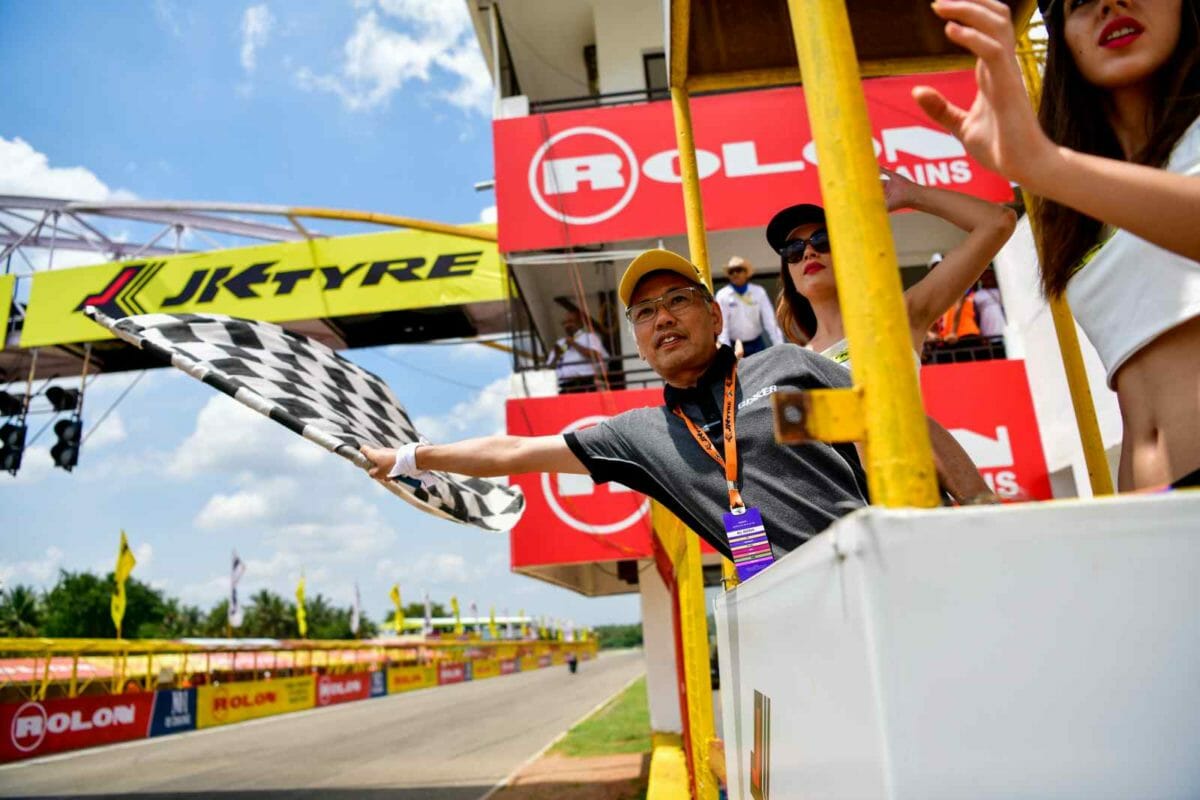 Back in the pits, the Suzuki engineers and mechanics earned a lot of praise from all the riders for what they had managed to achieve in a short time. For the final round of the Suzuki Gixxer Cup 2019 at the BIC, which is a part of the JK Tyre National Racing Championship, they will be altering the final ratio and fit a bigger front screen for the rider to tuck behind and go faster. Such events bring to the fore the true capabilities of a machine and although modified slightly, exploiting what the Gixxer 250 SF is all about during this endurance race only elevated its status in our books as a truly brilliant, refined and sorted Sports tourer in its category, if fast endurance riding in the real world is the order of the day. 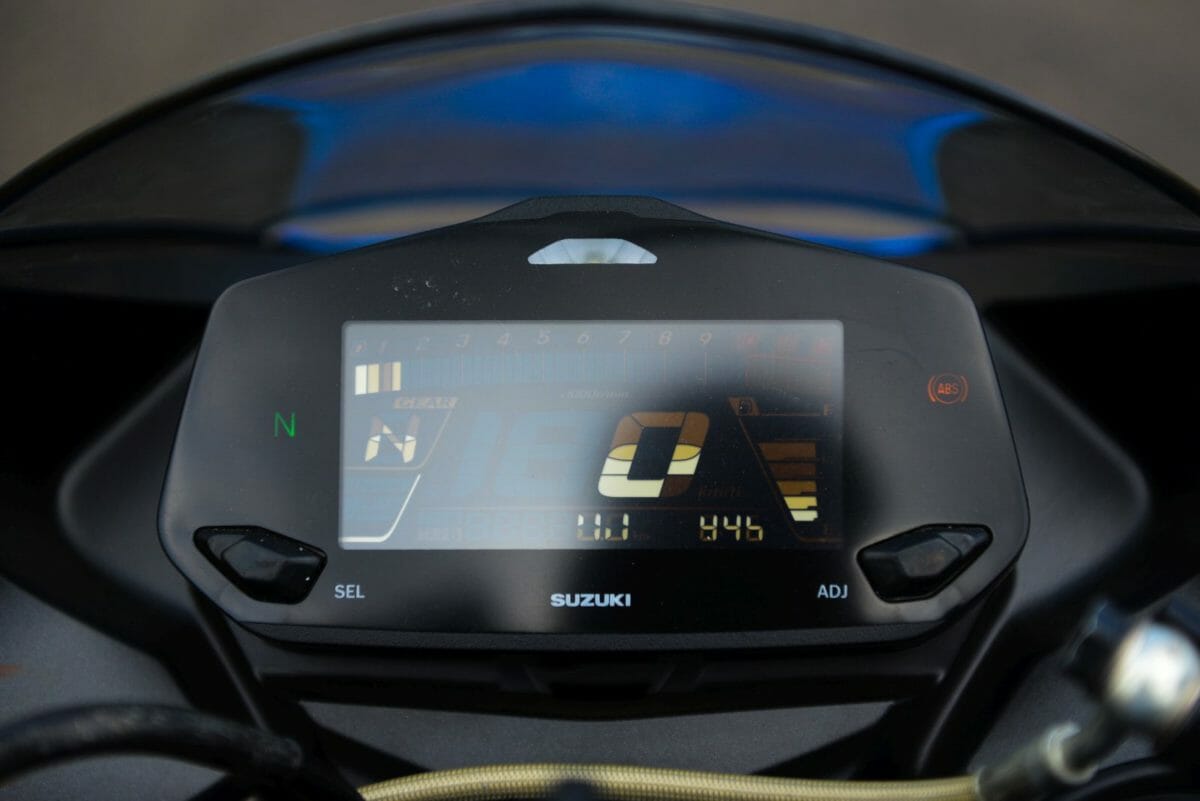 For those looking forward to riding on the track and if it’s your first time, remember to spend ample time in the saddle before you get there. Ensure your muscles, especially those in your legs, thighs, your core and your neck are strong and since ours is a hot country, make sure you stay hydrated at all times. Going faster on the track is a gradual process and as you spend time learning to get better, your body will need to last. A big shout out to all the gracious folks at Team Suzuki for inviting us to this event so that we could tap in another episode of thrill into our little piggybank of unique experiences.