Home Features VW Think Blue Philosophy: Does it work? We test it on the Vento 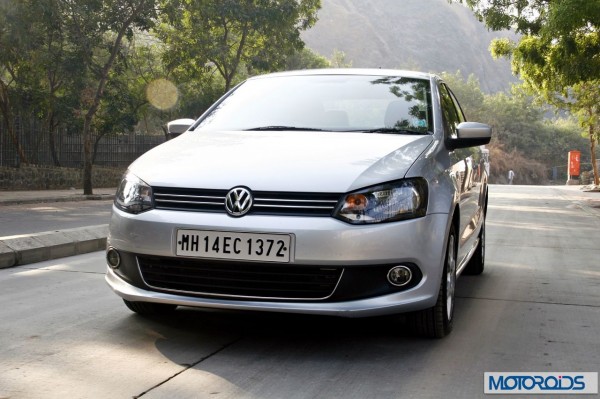 The VW Vento, though not branded a Bluemotion machine, unlike the Passat in India – does have some of the ‘Think Blue’ elements embedded in it. While the more extreme brake energy recuperation and stop/start systems are not provided on this mainstream car – it does feature some of VW’s efficiency enhancing technologies. Equipped with the compact, powerful, efficient and award winning 1.2 liter TSI engine and the terrific DSG twin-clutch auto transmission, the Vento 1.2 TSI does have the VW Think Blue imprint – leaning towards efficiency.

So does the new VW Vento with its alleged ‘modern’ tech offer any advantages to the everyday user in the real world? Does one the most accessible exponent of the Think Blue philosophy have any benefits in the grueling road and traffic conditions in India? 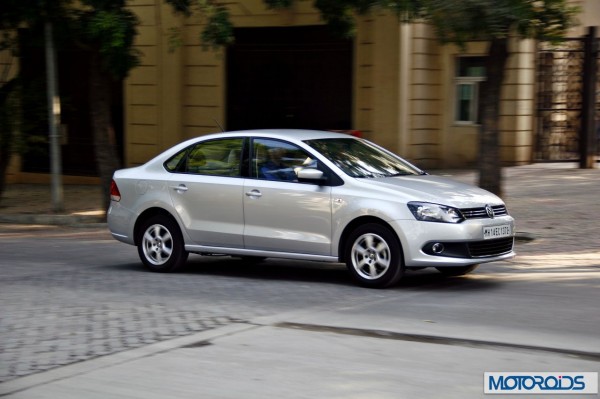 We strongly believe that any new technology should serve a purpose in everyday practice; otherwise it isn’t of much value – except probably to help the marketing honchos sell their products in larger numbers.  We wanted to see whether the much drummed up TSI engine, in conjunction with the DSG transmission tech offered any tangible advantages over its more conventional rivals. So we kept the new VW Vento with us for a few days, and used it, just like any other car, to figure whether the claims on the paper really translated into any advantage on the pothole ridden roads, found in abundance in Mumbai. 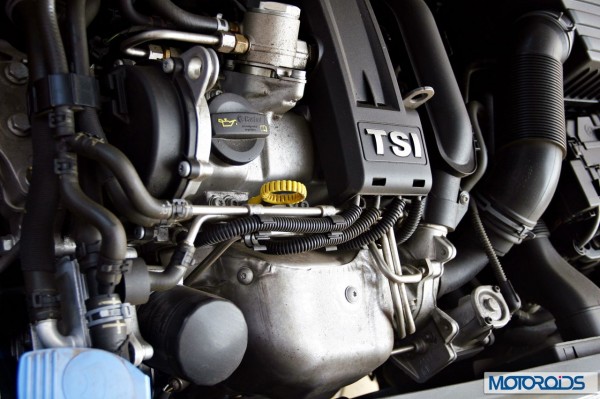 Let’s talk numbers first, which of course are quite impressive. The Vento 1.2 TSI is propelled by a pint-sized performer. The 1.2 liter engine on the car, though small, dishes out a very healthy 107 bhp of power at 5000 rpm. This makes the Vento take the accolades for having highest specific output of 89.17 PS/liter in its class (petrol powered cars). What’s more impressive is the class leading torque of 175PS produced between a low and incredibly wide band of 1500-4100 rpm – endowing the Vento with great pulling capability in any gear even at low engine speeds. The Vento may not be the outright winner as regards power output figures, but the massive torque equips it with fabulous pulling capability, which is what really matters for overtaking acceleration and efficiency. 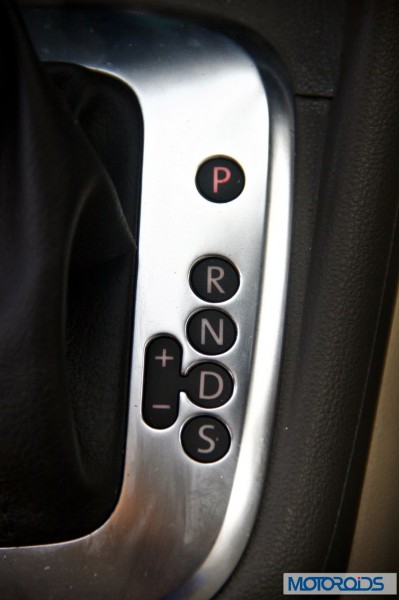 Aiding the Vento in its Think Blue cause is the DSG twin clutch 7-speed automatic transmission. Now, manual gearboxes are known have a good degree of efficiency. Conventional torque converter based automatic transmissions don’t quite match up in that department, but do offer great convenience and a hassle free driving experience.

DSG gearbox is a breakthrough technology in that sense – its dual clutch system fuses the best of both the worlds. It uses two dry clutches and a mechatronics controller which changes gears at a blazing fast speed, with minimal transmission losses. While some of the recent CVT transmissions do offer good efficiency, they lack the quickness and alacrity to allow for a fun drive. The DSG covers all the bases, providing a performance oriented, quick, and fuel efficient transmission system which doesn’t have any drawbacks. In terms of its resourcefulness, the DSG is quite unmatched by any of its competitors, at least for the mainstream segment the Vento represents. 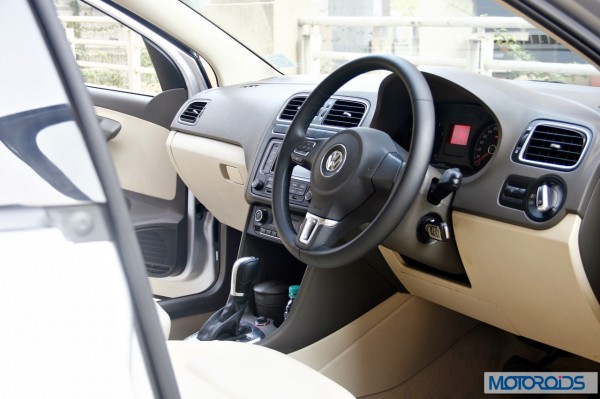 Now, petrol automatics are quite notorious for being sluggish and deliver horrendous fuel economy. It’s common for everyday cars even with small engines to return numbers substantially below 10kmpl, especially in the city. To equal or better a manual system in terms of efficiency is the toughest litmus test for a car that claims to be substantially superior to its contemporaries.

We drove the VW Vento car for close to 700 km, in and around Mumbai – in all sorts of traffic conditions. From the blazing fast expressway runs to the crawling traffic-ridden lanes under the lofty skyscrapers of Power Parel, we ensured that the Vento TSI saw it all. 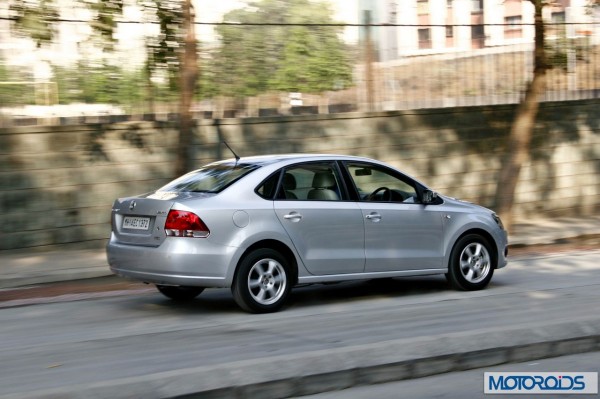 Now, we have seen several iterations of the DSG in VW group cars, including machines bearing the Skoda and Audi badges, and have invariably been delighted with the performance of the clever system. The 7 speed DSG on the VW is a relatively basic unit, but delivers equally well in terms of performance. You can choose from the regular Drive, or the enthusiast oriented Sport mode. You also have the option to shift gears manually. Gearshifts are intelligent, quick, and incredibly smooth. Under moderate acceleration or deceleration, the shifts are hardly perceptible. It’s only under hard acceleration or braking with the transmission going down several notches that you can feel the engine braking coming into play.

Overtaking is a breeze, and the transmission responds to throttle inputs with great promptness. Unlike conventional automatics or CVTs, the DSG does not pause and think before selecting a gear ratio. A push on the right pedal is met instantly with an optimal downshift, equipping you with enough power instantly to make the overtaking maneuver confidently. The alacrity of the transmission adds tremendously to the fun to the drive aspect of the car. The manual mode is the icing on the cake- giving you total control of the gearshifts. 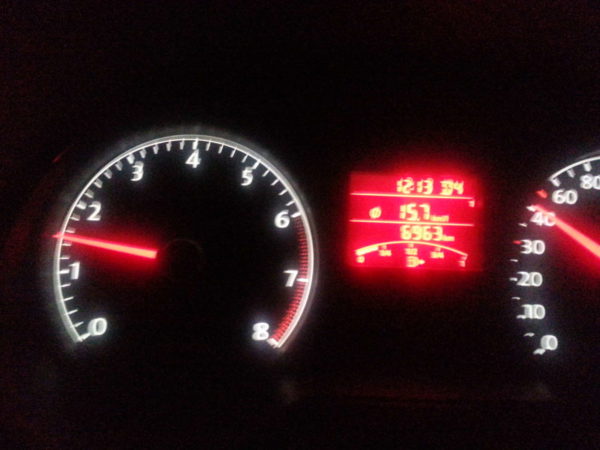 So, after spending a week with the car, and having been delighted with its performance we decided to have a look at the fuel efficiency figure. The overall efficiency of the car as shown by the MID was 15.7 kmpl, which matched our estimates. Now that sort of fuel efficiency for a big family sedan, powered by a petrol engine, and featuring an auto transmission is hitherto unheard of in the Indian market.

So does the VW Vento offer any tangible benefits from the brand’s Think Blue ideology? Well, our test suggests it does, and it leads its rivals by a fair margin. The transmission’s performance is unmatched, and along with the Vento’s German engineered underpinnings and 1.2 TSI’s generous torque, it offers a drive experience, which is unparalleled in the segment. The Think Blue philosophy, then, isn’t just a marketing gimmick – it does work outstandingly well. VW India needs to be congratulated for bringing the contemporary tech to everyday cars in India, and raising the bar for all the other manufacturers.