Home BMW A Visit to The BMW Museum in Munich: Key Exhibits, Details and Image Gallery 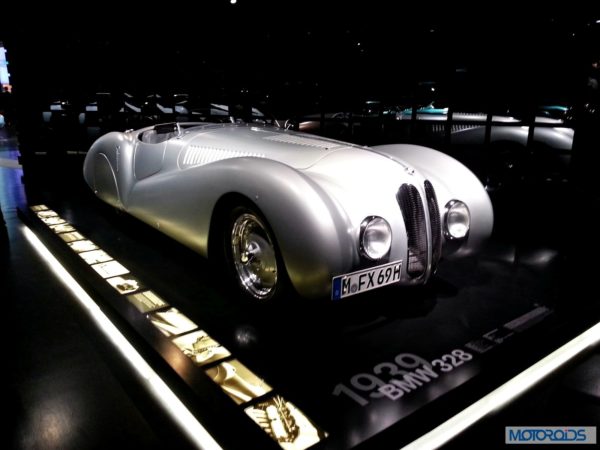 The BMW Museum in Munich, situated right below the BMW ‘Four Piston’ headquarters is home to BMW’s rich heritage in aircraft engines, motorcycles, automobile racing, and of course, cars. The museum also showcases the technologies of future which may be employed in BMW’s upcoming machines. We had the opportunity of visiting the museum, whose building is also known as ‘the Bowl’ owing to its unique shape. The ‘Four Pistons’ building and BMW Museum were designed by the Viennese architect, professor Karl Schwanzer. 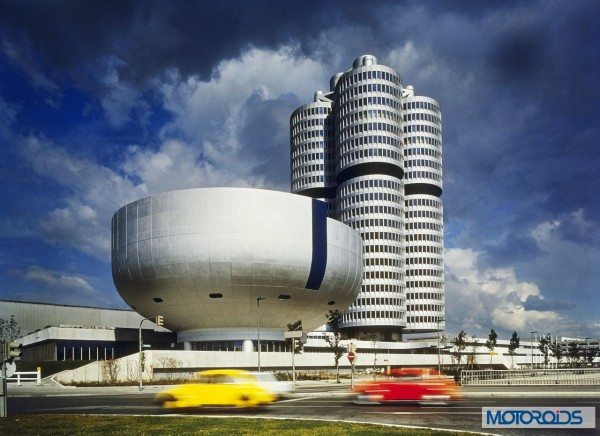 Opened in 1973, the BMW Museum is one of the oldest automobile museums in Germany. It features over 120 original exhibits from the brand’s more than 90-year history, arranged into 25 focus topics in separate exhibition areas. The museum witnesses up to 500,000 visitors a year – making it one of the most popular museums in all of Munich. 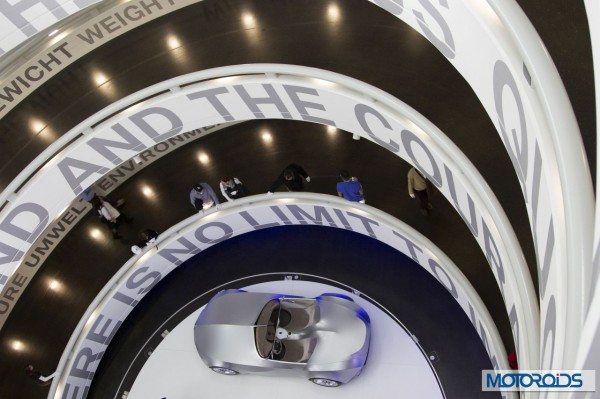 In addition to watching and getting awed by the exhibits, visitors to the BMW Museum have the opportunity to buy merchandise, postcards, rare items, books and models in the adjacent museum store. The BMW Museum also dishes out exquisitely prepared culinary delights in its M1 Café.

Here we have some images of the key exhibits at the iconic museum, which is considered to be a ‘national monument’ by the government of Germany. We hope you enjoy the images of the exhibits as much as we enjoyed the tour. The article has an exhaustive image gallery from the museum at the end. Don’t forget to have a look at the gallery, and do let us know how you liked the article. 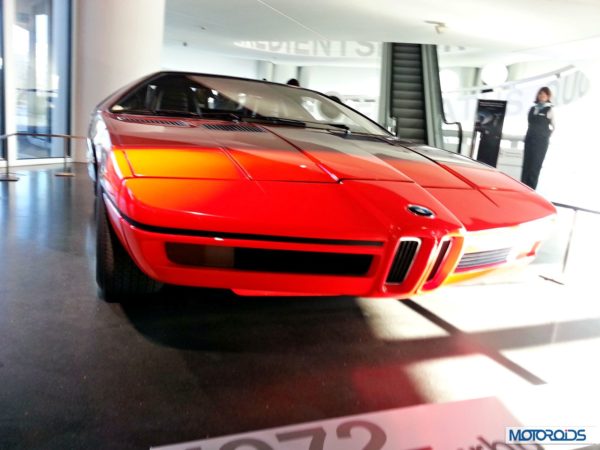 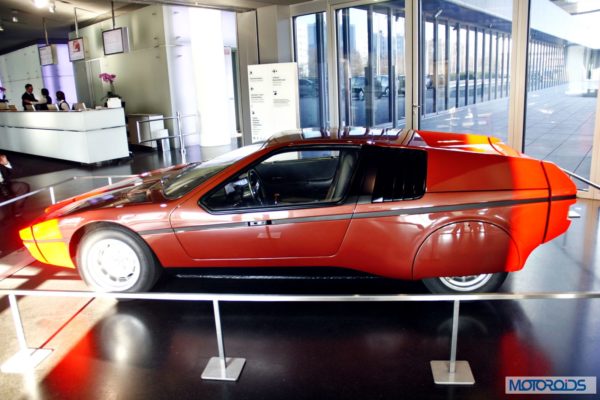 You are welcomed by the 1972 BMW Turbo, the first ever turbocharged BMW car ever. It laid the foundation to the M1 supercar, the only BMW supercar ever 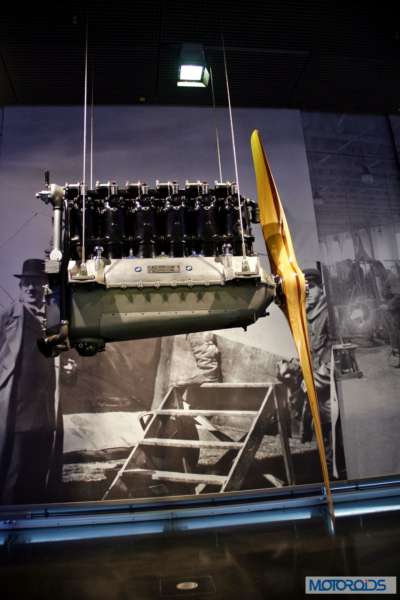 BMW was initially a maker of aircraft engines. This engine created the record for attaining the highest altitude in its time. BMWs engines were known to be much more powerful, efficient and reliable than its competition 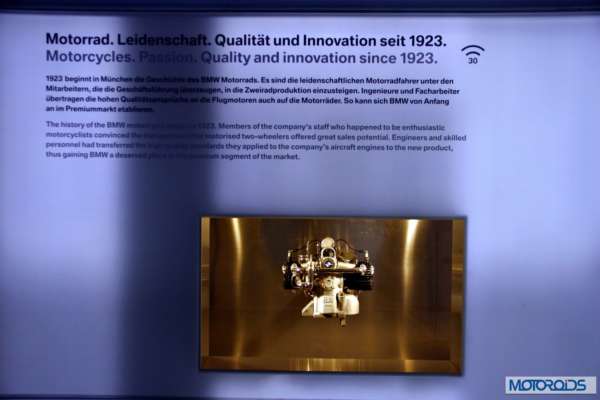 And then, a bunch of motorcycle enthusiast engineers decided they wanted to create motorcycle engines as well. They proposed the idea to the top honchos, which was approved, and the result was this. The first ever BMW engine for motorcycles – as you’d imagine, a boxer! 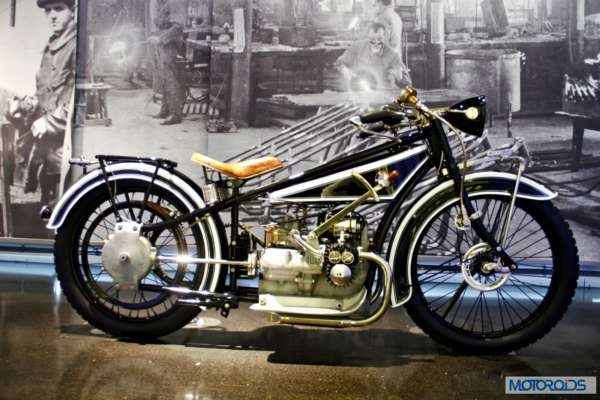 And this is where it was put – in the BMW R32 motorcycle, the first ever tw0-wheeler from the company 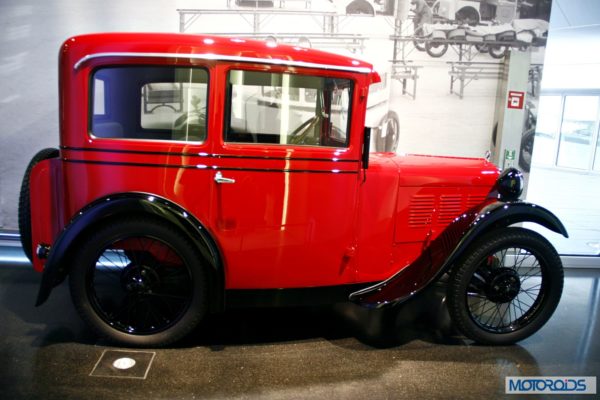 It didn’t take long before BMW decided that it was capable enough to create four-wheelers as well. And this is what the effort resulted in – the Dixi 3/15 PS with 750cc and about 15 bhp. A humble beginning for a company which would dominate the world of car engines for a very long time to come.

Next page for even more exciting exhibits from the BMW Museum>>> 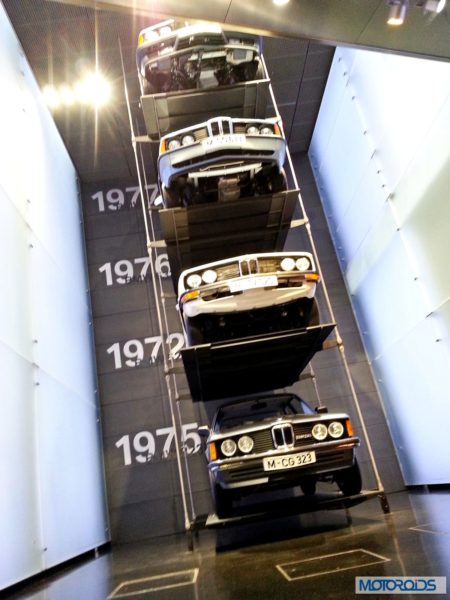 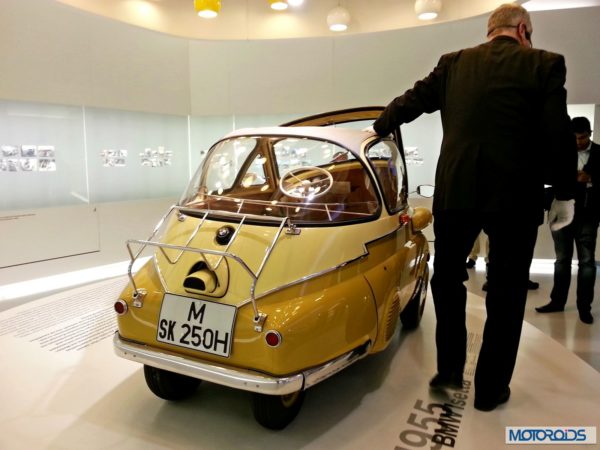 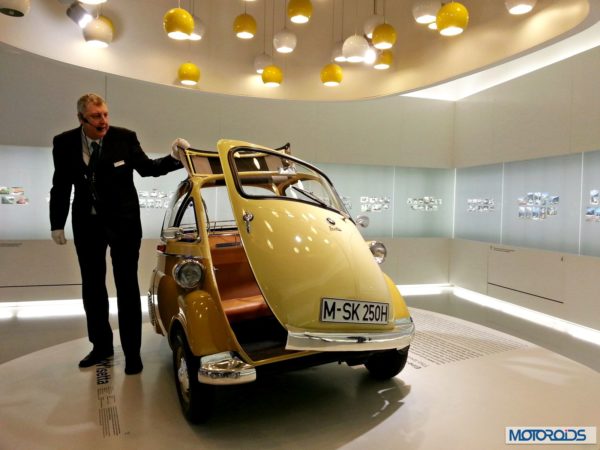 Could you ever have imagined that BMW would produce something like that? Yes, it’s a three-wheeler and its a BMW – the Isetta. the 247cc 12 bhp Isetts was an Italian design, but completely re-engineered by BMW. The first BMW Isetta appeared in April 1955 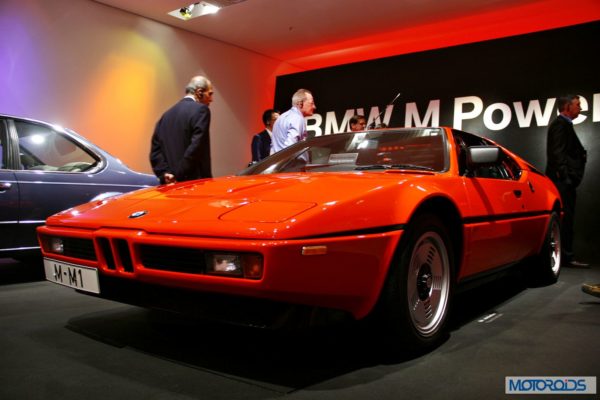 The Legendary BMW M1, the first and only mid-engined car manufactured by BMW. 3.5 L 6-cylinder petrol engine produced 277 PS in the street version, with a top speed of 260 km/h. Turbocharged racing versions were capable of producing around 850 hp. 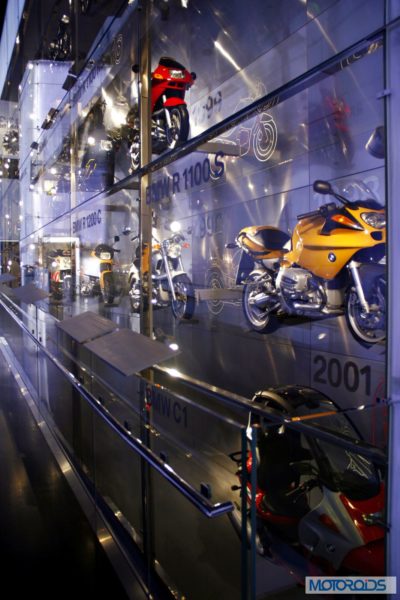 A vertically stacked glass showcase of BMW’s journey as a motorcycle manufacturer. 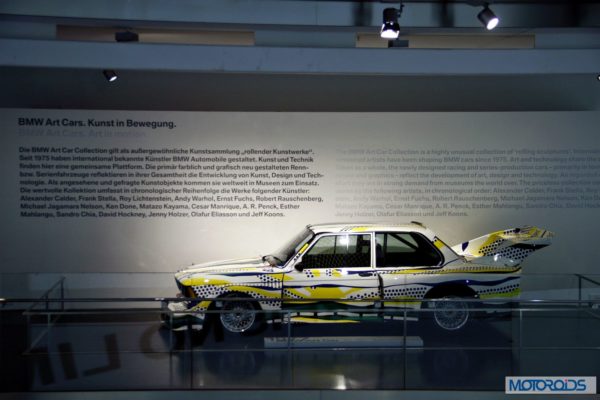 BMW Art Cars are famous the world over for fusing automotive engineering excellence with the creativity of artists. 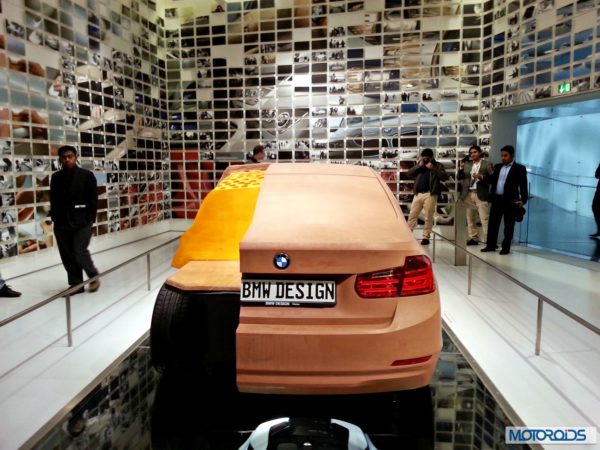 An exponent of a half-finished clay model with styrofoam inside. 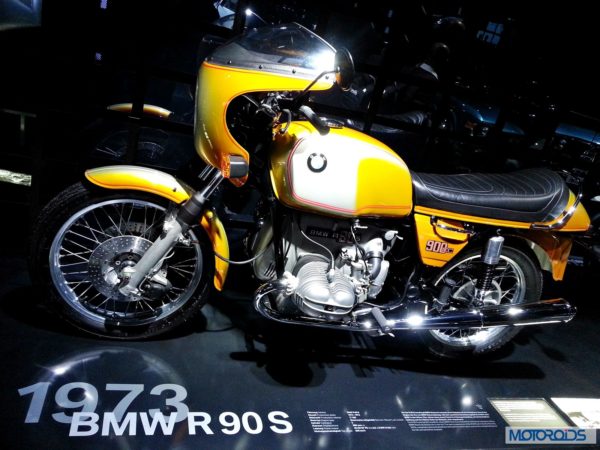 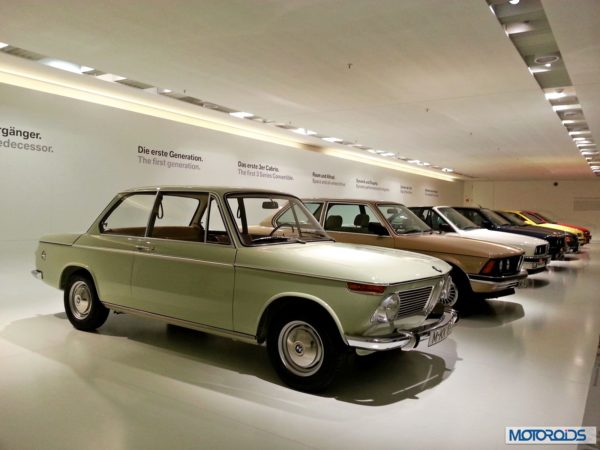 The evolution of the 3 series cars over the years. Check out the gallery after the article to see all the 3-series cars individually. 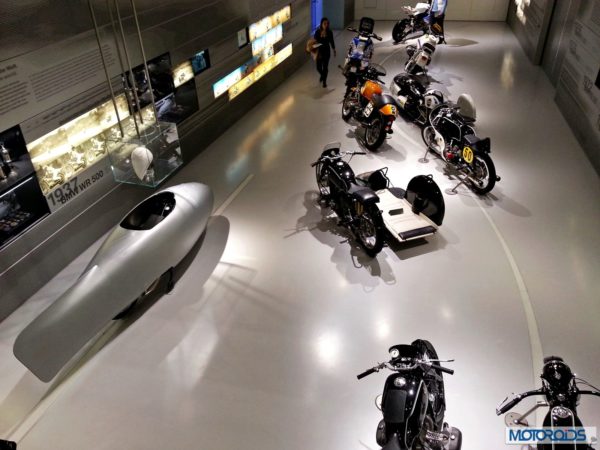 A representative collection of the some of the best BMW motorcycles. The S 1000 RR lead the pack at the top. 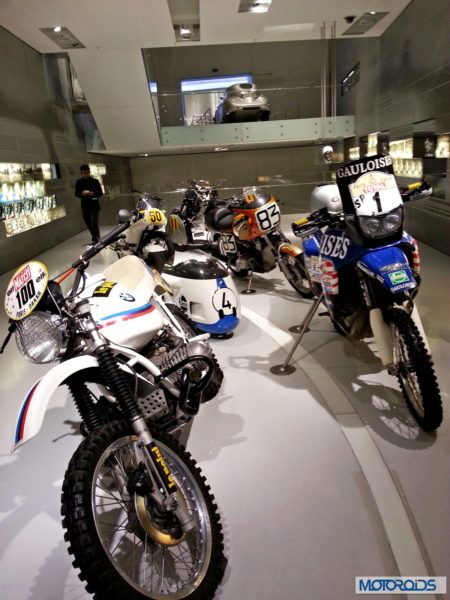 Another angle of the same exhibit. We see the Paris Dakar participating motorcycles in the lead here, followed by the sidecar racing car and others in the back. 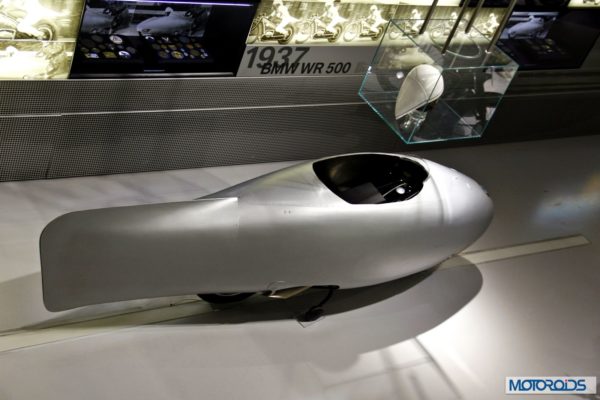 BMW Wr 500 from 1937 was meant for speed racing and was streamlined to attain maximum possible speed. Ernst Henne’s modified supercharged BMW WR 500 (500cc), on 28 November 1937 achieved a land speed of 279.5km/h at an enclosed section of Autobahn. Such was the phenomenal speed for the time, it took another fourteen years before the record was officially beaten. 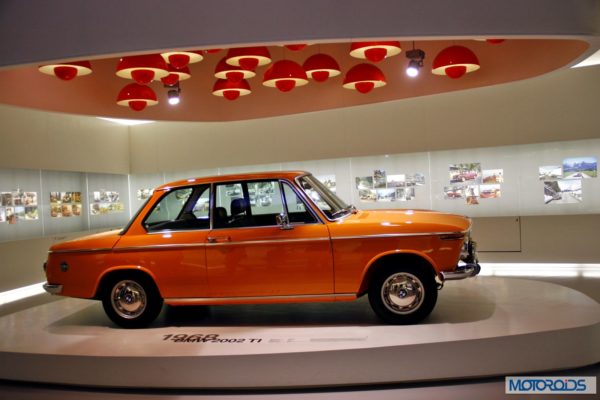 The 2002ti was very successful in racing and Hans Stuck won the Nurburgring 24-hour race in 1970. The car also won many hill-climbs and rallies 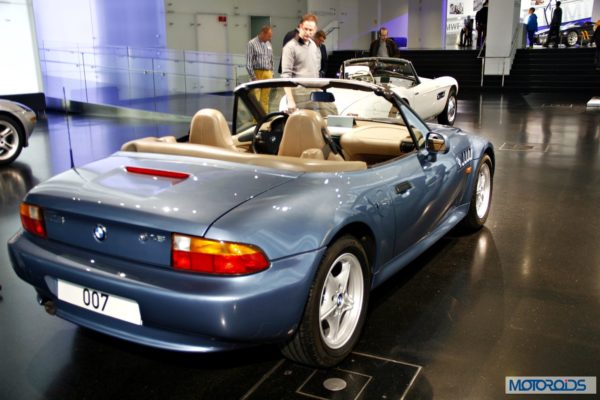 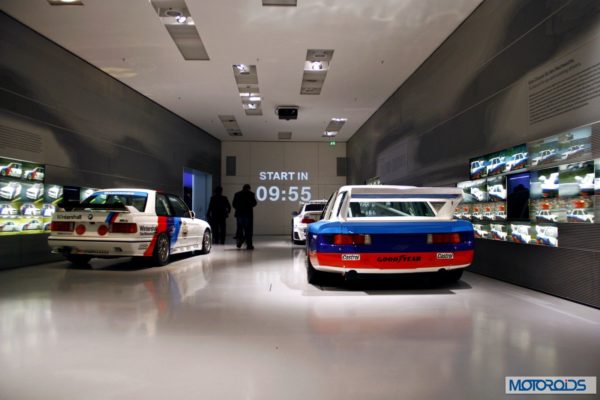 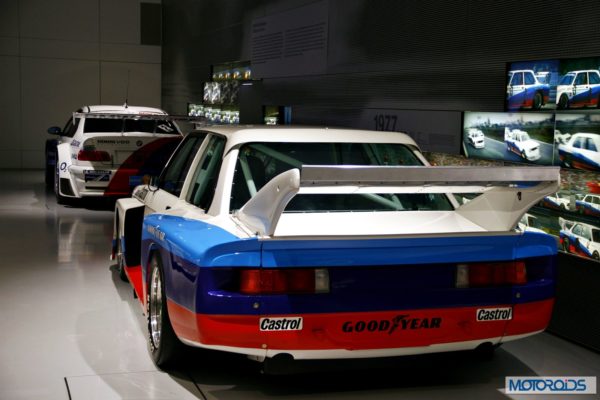 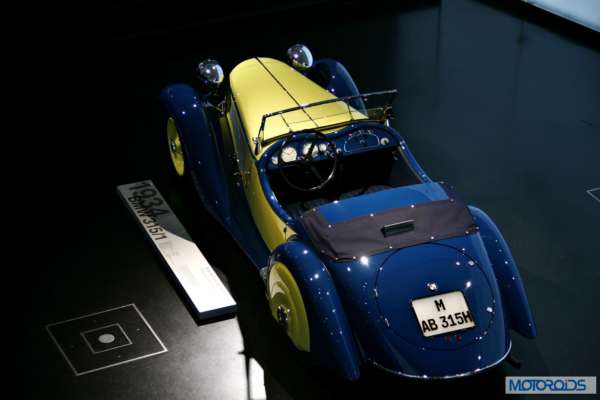 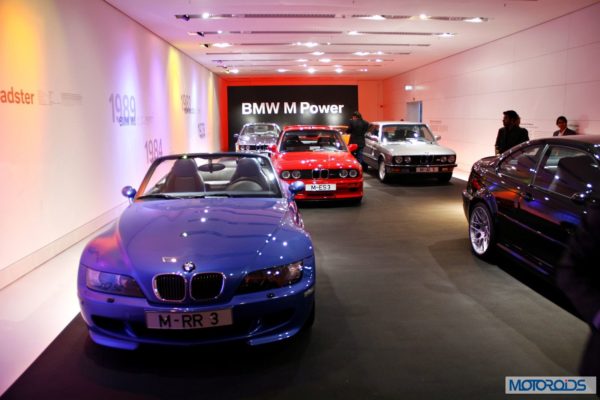