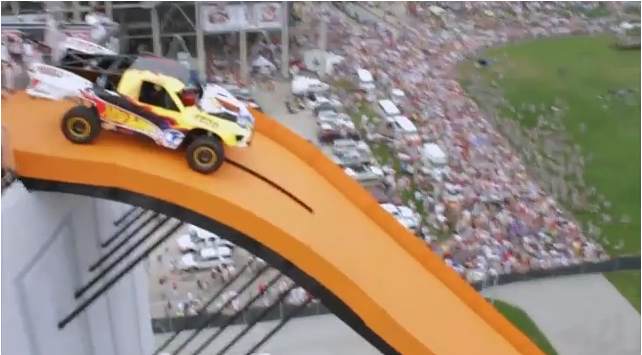 If you are a fan of daredevil jumps by car stunters, here is news for you. The record for the longest ram-to-ramp distance jump in a car has just been smashed. The feat was achieved by Tanner Foust (yeah, he’s the same guy who defeated Ken Block in Gymkhana Grid) of Team Hot Wheels. Foust kept his car in the air for a crazy 332 feet. The three-time X Games gold medalist and professional stunt driver smashed the previous world record by an impressive 31 feet at the 100th anniversary of the Indianapolis 500.

The driver sped down a 90 ft. ramp, suspended on a 100 feet tall door. The identity of Foust was kept secret by the team before he performed the stunt, and he was referred to as the Yellow Drive.

“As a kid playing with Hot Wheels I could only dream of experiencing something as outrageous as a life-sized V-Drop track set, and today it became reality,” said Tanner Foust, Team Hot Wheels Yellow Driver. “There’s a lot that goes into being on Team Hot Wheels and the training and testing leading up to the jump gave me the confidence needed to push the mechanical and mental limits of the challenge and land the world-record title.”