Home Features The Hymn of the Holy Hulk 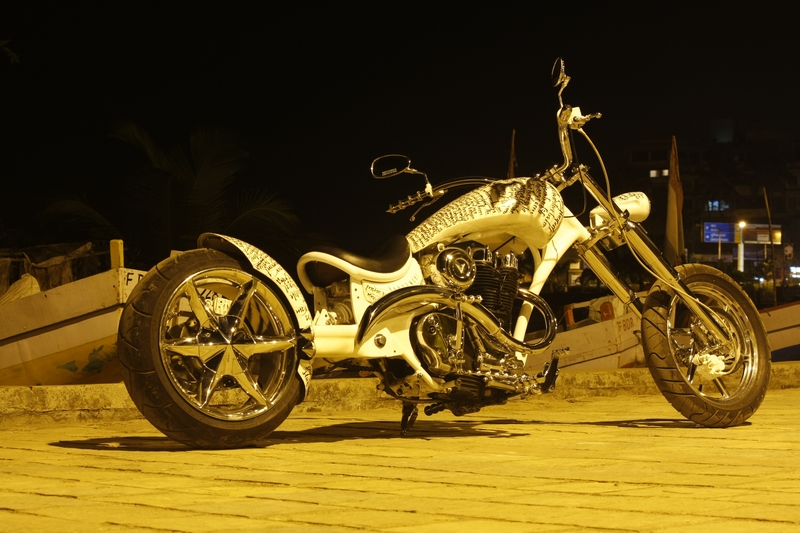 Akshai Varde is one of the best custom bike builders I have met till date. This evening he was to amaze our team with an unusual creation of his. I drove past the marine lines to meet this guy. But it was all looking different today. It wasn’t a regular Mumbai evening. There wasn’t a single couple sitting along the sea face, nor a soul briskly walking around. The sound of the waves was loud and distinct even with Mumbai’s traffic very much trying to overshadow it. The stars twinkled no more as the rain gods clouded the sky. The scene looked set for yet another torrential rainfall coming down on the metro. We continued to the rendezvous point, unsure about Akshai’s presence. 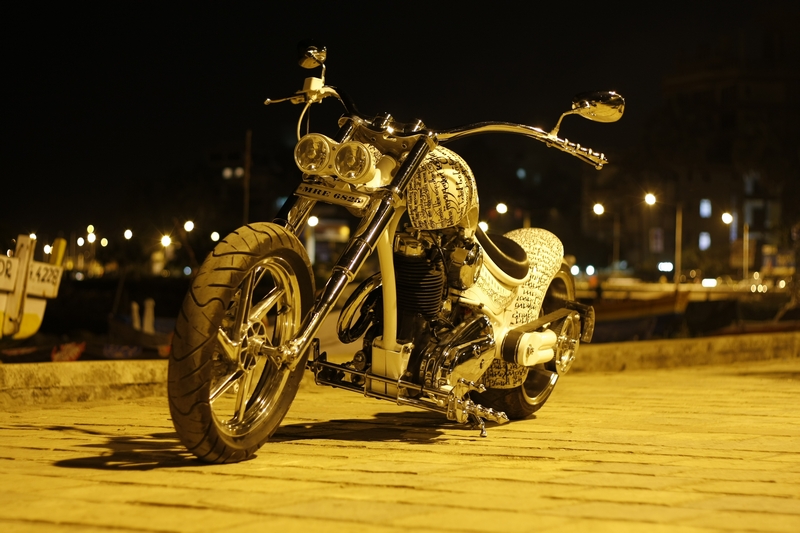 But as we waited, the scenario started to change. Coincidence as we would call it, the dark clouds were slowly disappearing; the night life at Bandra was coming alive again; and then suddenly our ears started concentrating. It was the familiar thump. Vardenchi’s latest creation was making arrival onto the scene. The pedestrians paused, the cars made way and a white hulk with a wheelbase longer than an ape’s leap rode into the crossroad. There it was, a new chopper, a new design and the usual theme. What stood in front of us was truly amazing – and as you would expect, better than Vardenchi’s past creations. 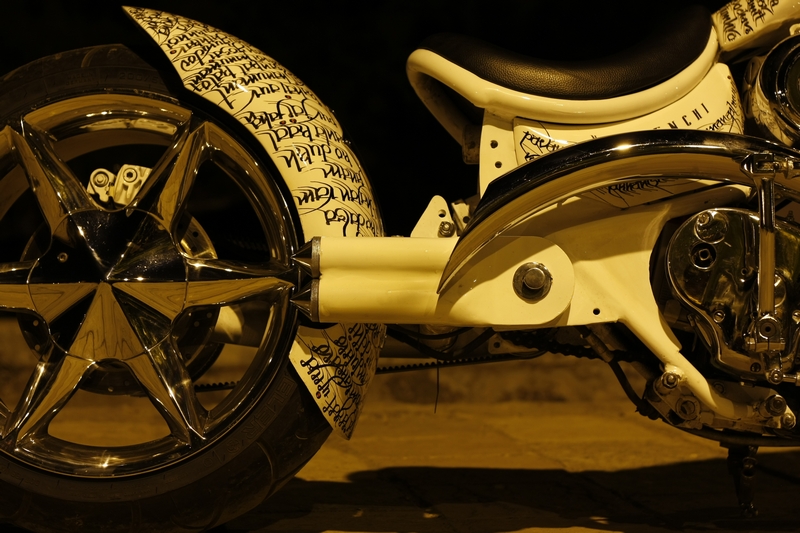 I walked around the metal sculpture repeatedly to absorb its stunning design. This chopper is probably one of the longest that Akshai’s team has ever built.  The entire body work looked similar to the Vardenchi choppers that I have ridden earlier, but this one stood out. It’s finished in bright pearl white, but what sets it apart is the beautiful inscription of the entire ‘Hanuman Chalisa’ which runs right from the headlights to the rear fender. We have seen skulls, flames, tribal art and even air-brush artwork on choppers, but something like this is a completely novel idea. Akshai told us that the enthusiast who summoned this bike is a devotee of Lord Hanuman, so he wanted a chopper that could in some way signify his devotion towards the deity – and hence the inscription. To maintain its originality, the Avadhi poem isn’t translated, but instead inscribed using English alphabets. No stencils were used either, rather an ethnic font depicting those of the ancient Vedas was used by  Akshai’s mom to inscribe the poem on to the bike. The whole idea has been executed very well. Believe me when I tell you, this chopper looks far more breathtaking the in flesh than in any of the photos. 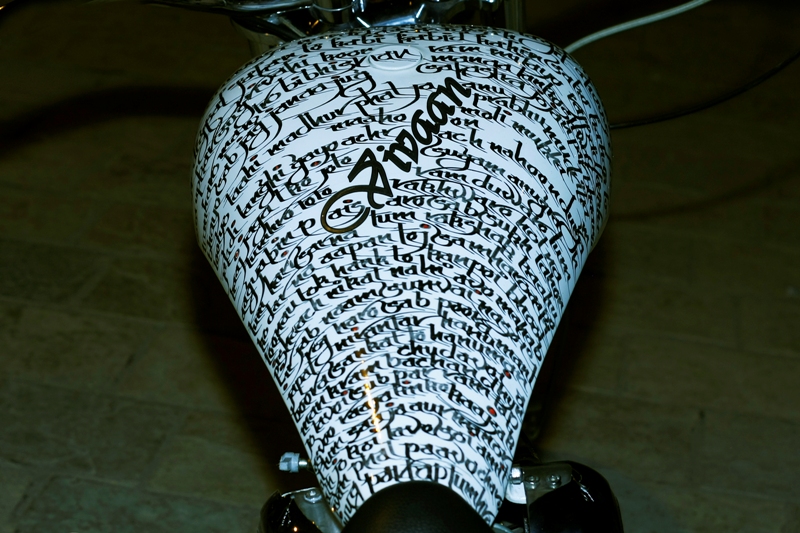 As crowd started gathering around the chopper, I asked Akshai for the keys. With a smile on his face he replied ‘There are no keys for this bike. Its so holy, no one would attempt to steal it…’. I smiled back, got onto its saddle and rode away. The bike is loud with its straight through exhaust pipes, but the thump is pure, for it comes from an old 1980s Bullet 500 powerplant. It has the ability to shake the ground that it’s riding on and make an announcement of its arrival while still being a mile away! Surprisingly, it’s very convenient to ride too. The revised suspension elements are sufficiently comfortable, while a recalculated steering geometry makes it easy to maneuver this lengthy motorcycle. The donor bike being almost three decades old, has the least clutter of cables you can come across making the finished product appear very clean. The whole customization has cost the owner much more than the price of a brand new hatchback, but it’s worth every penny, for every inch of this bke puts you in the spotlight. Be it the 200-section tyre; the large 17” chrome draped rim; the single sided swing arm or the sheer wheelbase of this steed – it all gives this chopper its unique character. 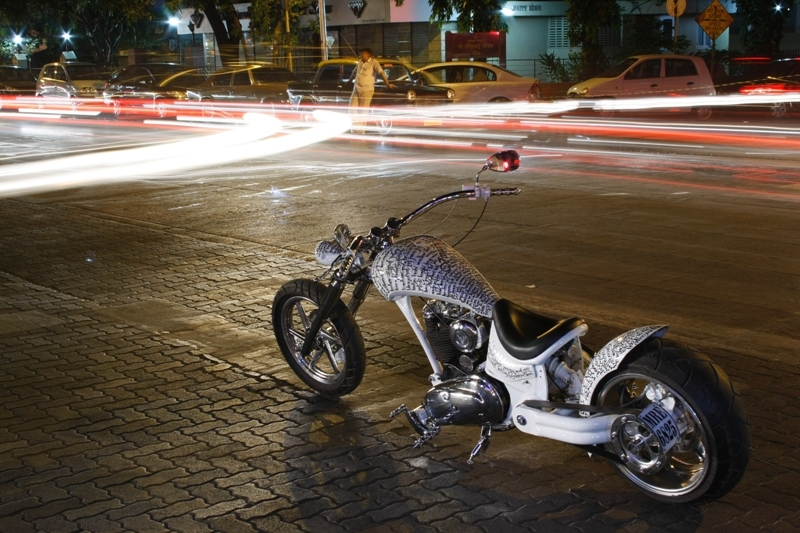 Its not that Akshai hasn’t used these components earlier, but on this particular model, they look special. The quality, the fit and finish and the execution is all perfect. It’s so exquisite, it can make the pedestrians on a Mumbai street freeze in awe. And that’s saying something. Be it anyone on the road, from the taxi-wala waiting for his fare to the odd aunty in her saree, they all take a pause to have an eyeful. I have ridden a lot of motorcycles that wet dreams are made of. But the feeling that I had while riding this machine was out of this world. I knew that I was the only person on the whole planet who was riding this piece of art at that moment – for there wasn’t another one like it anywhere! Such is the aura of Vardenchi’s divine creation, that it can even make an atheist start worshipping the pagan god. A verse from the Chalisa that befits this chopper as aptly as it does to the deity himself, reads, ‘Aapan tej samharo aapai, Teenhon lok hank te kanpai’. (You alone are befitted to carry your own splendid valor. All the three worlds (entire universe) tremor at your thunderous call). I couldn’t agree more!