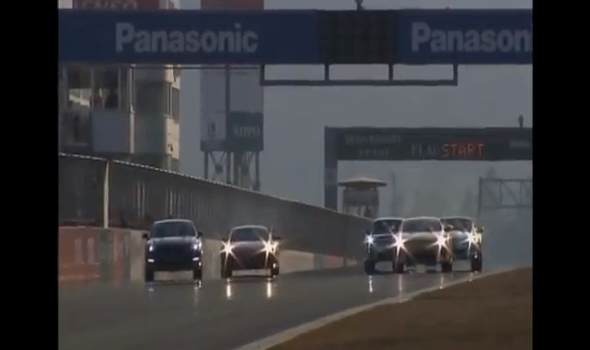 You won’t be a motorhead if you miss this. Some of the best racing cars slugging it out in a three lap battle, including the rarely seen and scarcely reviewed LF-A. The contenders include the King of the ‘Ring Nissan GT-R, the epitome of American muscle Chevrolet Corvette ZR1, Toyota’s exorbitantly expensive supercar Lexus LF-A, Porsche GT2 RS and the Italian Stallion Ferrari F430 GT3 (sorry, all you Rocky Balboa fans).

Best Motoring magazine has just wrapped up business, but just before they bid adieu, they made sure that they went out in terrific style. The mag put the aforementioned exotics in a three-lap battle on a racetrack.

Sure enough, the Porsche and the Ferrari featured in the race are not street cars, and have special equipment for the track, but the street legal contenders are no slouches either. The technical credibility of this test can easily be questioned, but at the end of it, we’d love the five exotics racing for supremacy anyway. Even with commentary and reviews in Japanese this contest becomes a must watch for a motoring enthusiasts by virtue of the list of the cars itself.  Have a look, and do take a moment to have a guess on which of the five cars wins the race, before you begin watching. Don’t forget to put your guesses as comments…and no cheating!