Snehal Chavan follows a simple philosophy. He slogs at work six days a week, practises Motocross riding on Sundays and ends the year by winning a national championship! 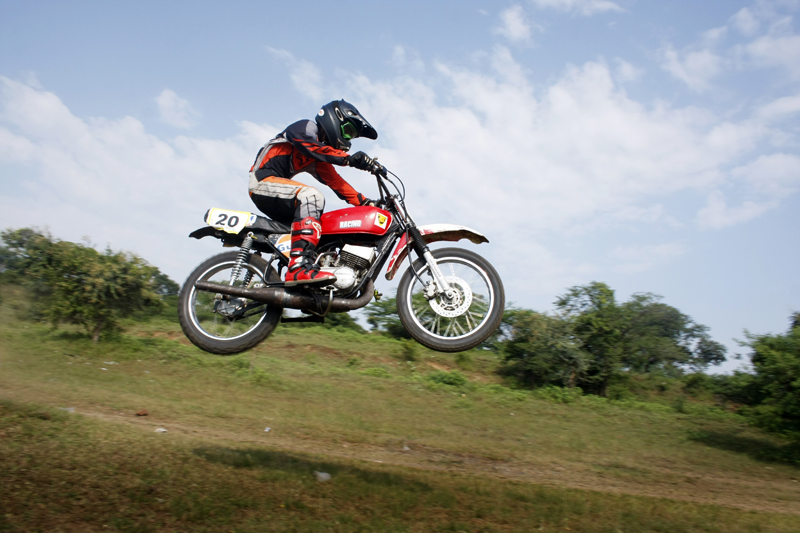 A majority of professional racers have a mentor to seek guidance from and learn the finer nuances of the sport. Snehal Chavan didn’t have that privilege from day one.  By his own admission, he has achieved motocross success by observing the techniques of other racers and emulating it. Since 2005, he has been practicing religiously every Sunday at an open ground near his house which has a few table-tops that were constructed a decade back. The effort taken by him has been worth it. He has humbled professional motocross racers who comprise the cream at national level. 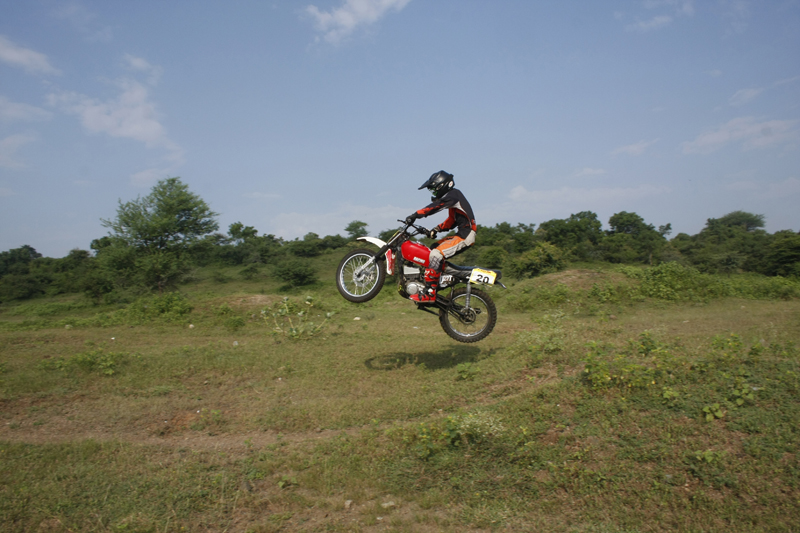 This picture should give you an idea of how high Snehal can make his motorcycle jump. BTW it was clicked just moments before his landing on terra firma.

Snehal first expressed his desire to pursue a career in racing to his elder brother Shrikant.  His brother had taken part in a few races but had to quit the sport untimely owing to financial issues. Shrikant undertook all possible measures to ensure that Snehal’s motorsport dreams didn’t end on the same note as his. He bought a second-hand Sunny Zip and modified it so that Snehal could start practicing and get familiar with the techniques of motocross racing.  Shrikant even approached a professional racer whom he knew with a request to teach his younger brother the basics. The racer declined to guide Snehal in treading the motocross path saying that he rode only in the foreign class on imported motorcycles. 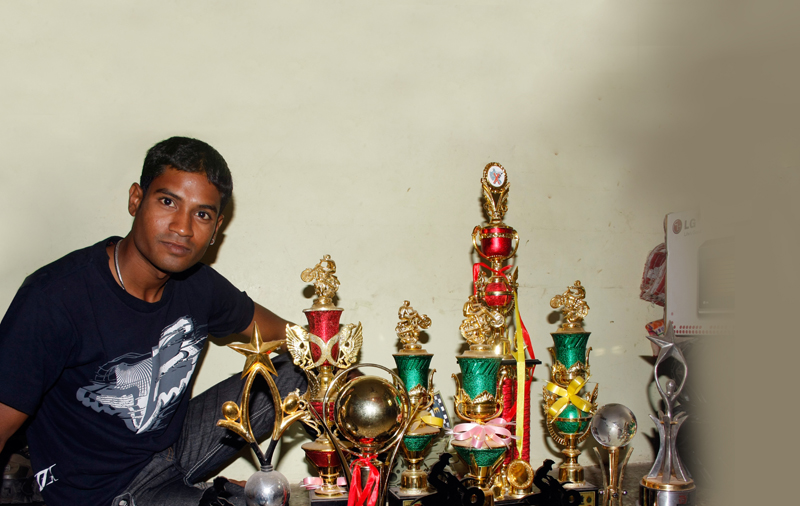 We were unable to accommodate all the trophies he has won till date in a single photograph! There are around 15 trophies which are which are not a part of this picture.

The indifferent attitude and ego shown by the racer angered Snehal. He reined his anger constructively by practicing on weekends and learning from every crash. With no one available for guidance he wasn’t aware about riding gear and ended up learning the hard way. His face lights up while recalling that he first bought chest pads after bruising his chest region owing to a fall, gloves after the skin on his knuckles got peeled off and boots after spraining an ankle! Snehal admits he was lucky that his helmet flew off due to the impact after he successfully landed his first jump on the Sunny Zip.  It scared him into researching on good helmets and he bought one before the next practice session.

The first motocross race that Snehal took part was in 2005 at Goa. It was a forgettable debut as he didn’t even qualify for the race. He saw that the entire race revolved around five Yamaha and TVS factory riders battling for top honors.  He utilized the opportunity of viewing a live race by observing the riding techniques and body positioning adopted by the professional motocross racers. He started practicing hard every Sunday while applying the techniques and analyzing them.In 2006, TVS factory team sent out a word that they were looking for motocross enthusiasts with no previous racing experience to represent them in the Novice class at the National Championship. Snehal approached the team and got selected. 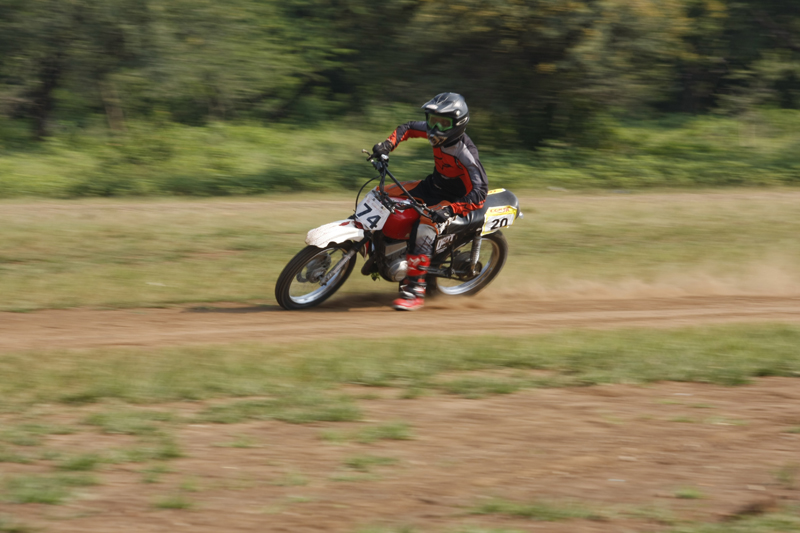 Taking a turn on a dirt spec RX135 at high velocity is not as easy as this picture suggests. Please do not attempt this without wearing full riding gear.

Under the guidance of a factory racing team he got to learn and practice everything related to motocross. In short, his career took off with a 2nd place finish in 2stroke Novice class at the 2005/06 Gulf Dirt Track National Championship. In 2006/07 he graduated to the foreign motorcycle class and claimed 3rd   position while he ended the 2007/08 season by finishing 3rd in the Indian expert class at the National Dirt Track Championship. In the 2008/09 season he finished 1st in the Indian expert class at the Gulf Autocross National Championship. In his motocross/autocross racing career till date he has occupied the top spot on the podium 23 times. While he has bagged a second place finish 25 times and managed to round off the podium 22 times. 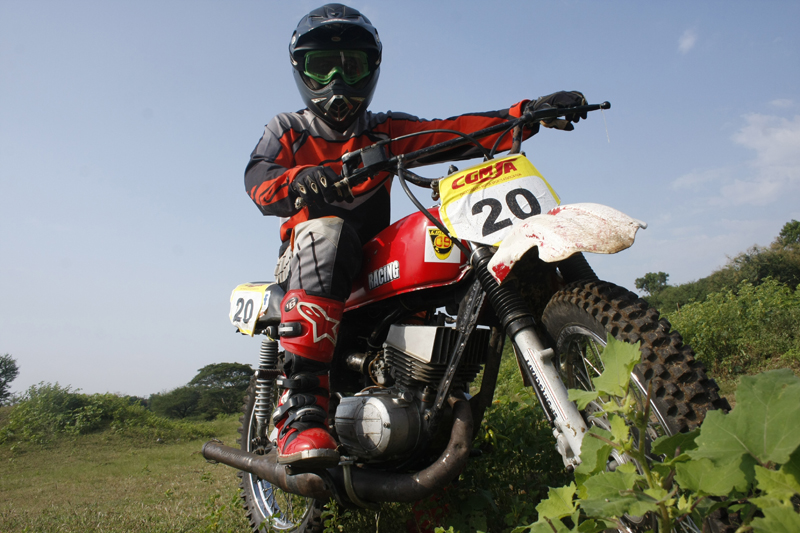 Snehal strikes a one-off pose for the camera

Inspite of having won national championship titles he still has his feet on the ground. At every motocross event, regular followers walk up to Snehal and tell him that he is talented. It does not bloat up his ego for he is generally busy with the thought of how he will meet the monetary requirements for the next race. Since 2008 he has receiving part sponsorship from Pashankar racing and is grateful to them. Snehal frankly admits that the only factor limiting his motocross exploits is the lack of training facilities and riding schools in India. Irrespective of all the hardships, he religiously practices all by himself every Sunday and yearns to claim more motocross victories. It was his dream to become a motocross racer which he has realized with the support of his brother, family and uncle Raju Yende. One does not need to be a genius to understand that Snehal won’t let his dream wither away easily.