It’s hard to tame insanity, and after the Chevrolet V8 powered Boss Hoss motorcycle, it was only a matter of time before somebody put a V12 engine into a bike. At a recent event called Caffeine and Octane, which takes place once a month in Alpharetta, Georgia, this monstrous, V12 Lamborghini  powered bike was seen. More details are scarce, but we do know how it sounds. It’s also fully-functional, besides having a really tough time justifying its existence. 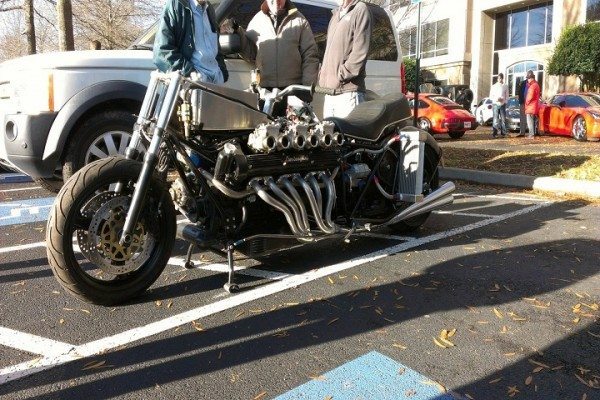 The cynosure of all eyes at the event, the bike looks massive, and unusually long, because of its preposterous V12 heart- which meant that the handlebars and the minimalist instrument console had to be shifted aft, almost in the center of the behemoth. The owner (apparently) took a moment and cranked it up, and rest assured, it sounds unmistakably exotic and so V12.

Hear it for yourself below: