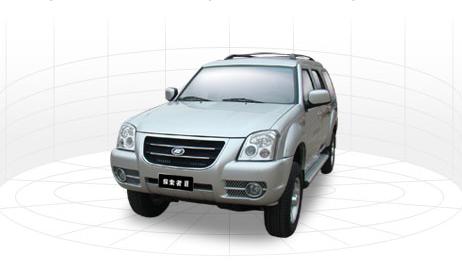 A few days ago we had showed you the spy pictures of the big SUV Force Motors is readying for India. The test mule was caught on test by our friends at Velocitimag. As we had mentioned in the post, ever since we saw the car, we were wondering how Force Motors managed to develop such a huge SUV in such a short span of time. It was almost like springing a surprise on an industry where development of even the smallest car takes years of planning, research and development – and the news and rumors about these cars clutter the webspace much before the real thing emerges on a road.

We put on our thinking cap and tried to find out if there was a foreign connection to this new machine, as it was really difficult for us to believe that Force Motors had developed this huge SUV indigenously all by their own. After groping in the dark for a while, we stumbled upon a little known Chinese car maker known as Guangdong Foday.

There is an SUV called Explorer in the carmaker’s model list whose dimensions and shape match exactly with the SUV that was caught on test. Quite clearly, this means that Force Motors are developing their new SUV for India in collaboration with Guangdong Foday, and the vehicle caught on test was none other than the Explorer.

Page 1 of 4. Go to the next page for a comparative image and similarities between the two SUVs>>>

2. The bonnet height, the position of the headlamps and the way the area around the front fender sweeps backwards towards the A pillar is striking similar on the two cars. The wheel arches also seems to be flaring out exactly to the same extent.

3. The shape of the front window – the angles and the size is exactly the same as the Chinese machine.

4. The roof of the test mule has a pair of rails shrouded under camouflage – its shape is exactly the same as the said vehicle. Also, the overall length and the tail area of the test SUV is same as stock Guangdong Foday Explorer.

Page 2 of 4. Go to the next page for details and pictures of the interiors and the engine bay>>>


We had a look at the interior images of the car as well, but as expected there wasn’t anything spectacular about the interiors. Equipment level in the car selling in China is basic. The interiors are done in a shade of beige with aluminium finish surrounds for AC vents, power window buttons and door handles.

In China, this SUV comes with three engine options – two diesels and one petrol. We are more than sure that the engine that would make it to India would be the 2.8-litre common rail diesel producing 95 PS of power at 3600 rpm and 225Nm of peak torque at 1600-2600 rpm. The engine is mated with a 5-speed manual transmission. Front has got independent suspension, while rear has leaf springs by the look of it. (Click on the specifications image).

Page 3 of 4. Head over to the next page for the Specifications, Features list and expected price of the Force Motors SUV>>>

We think this SUV should reside in the Tata Safari region and should sell for anything from 11 to 14 lakh rupees in India. Expect an introduction on the India roads by early-mid 2011. Stay tuned to Motoroids for more info on this vehicle…