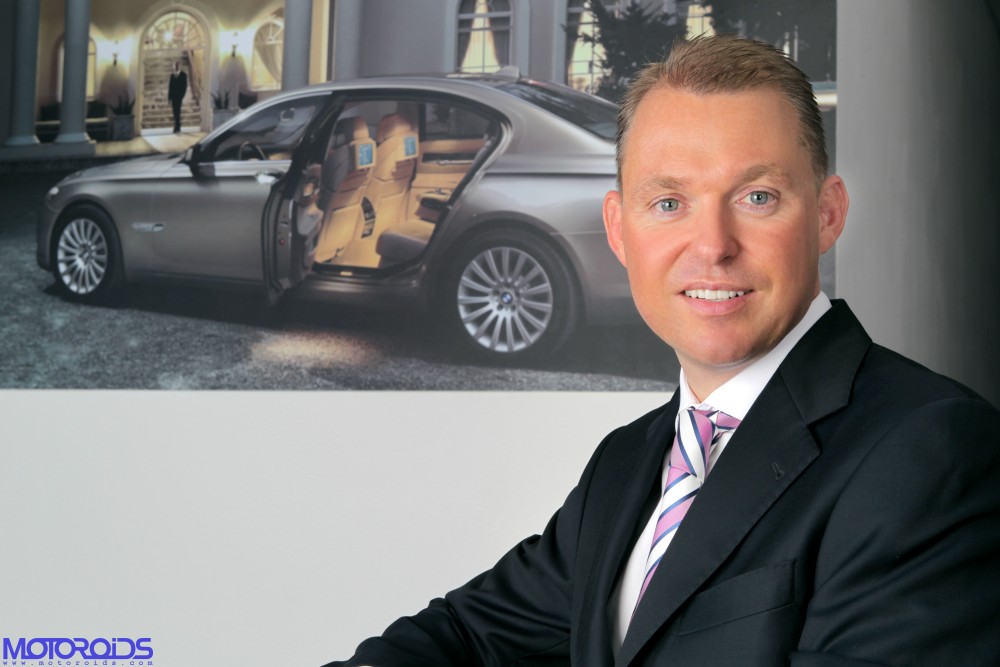 Dr Andreas Schaaf, President BMW India answered a variety of questions during the Q and A session at the BMW X3 launch. Here’s a compilation of all the questions and their answers as provided by Dr. Schaaf

There has been news of financial instability in Europe and America. What’s BMW’s outlook for the Indian market? Can the premium segment in India be affected?

Well, are concentrating on India, and the premium segment in India is very stable. If we talk about the current situation, it has indeed been the best period for us since our start. We have been witnessing best sales month. We are still very optimistic and don’t have any major concerms. We want to achieve the goal of selling 10,000 units in India this year. As of now we don’t have any indications that the business in the premium segment is on a decline.

X1 has done brilliantly for you, accounting for half your sales. It’s clearly one of the biggest reasons why you are number one today.  How are your non-X1 products faring against the competition?

We have always made it very clear that the X1 is the most important model for us this year. We are well on track with X1. In fact we have a supply shortage else our numbers would have been higher. We are looking at getting it better. We have been doing more than 400 numbers for the past few months.

As for the non-X1 products, we are dominating the segment with the 5-series. Even with the X1 eating into the 3-series’ sales, which was expected, the model is growing at 30%. We never had the leadership in 7series’ segment, but we are closest to achieve the target and we are just 20 units behind the segment leader. I think it’s quite a good performance. In a nutshell I can’t complain about anything. We have been doing very well.

Any plans to bring the 1-Series to India

We had recently invited all the BMW India dealers to Frankfurt for the 1-series and Mini Cooper drive. We got some feedback from their end as well about the suitability of products to the Indian market. However, there is no decision taken yet on the launch, and there’s nothing concrete to be discussed about the subject. Still I personally believe that hopefully the 1 series will make to India, but I don’t and can’t say when.  I think it is a concept which makes sense for India. I believe in the concept, but I will have to convince others. So far nothing has been decided. I am known to be a Mini enthusiast. It is my ultimate target to get Mini launched here during my tenure. However, nothing has been confirmed yet.

Audi India recently launches the Q5 at a price of Rs 35 lakh. Its price is about Rs 6 lakh less than the X3. How do you intend to tackle it?

Well, their decisions wil be taken by them. I cannot decide for them, nor can comment on their decisions. But I think that the X3 is a fantastic product. It’s a great car because of its size, the space inside, its driving dynamics and the generous equipment level. It’s only because of all these factors that we are confident about the product. The X3 boasts of great equipment level which makes it truly a luxury car and a great VFM proposition. We are not going to take it out to reduce price.

Mercedes is targeting youth in India. Is that affecting your market?

Well we don’t believe in selling to only a specific segment. BMWs are drien by youngsters as much as it is driven by uncles and females. We don’t have any problem with their positioning. We sell to everyone.

Why has the X3 been introduced only with diesel engines, and no petrol

Diesel engines fit perfectly with the SUV character. India is a diesel market, and people perefer diesel to petrol here, especially in this segment. I am not saying a petrol variant will not come in the future, but at this point we think the diesel will address the demand pretty well.

What sales numbers do you expect with the X3

We don’t know the natural volume in this segment, so we will have to see. We are looking at last year’s numbers from our competitors but we have a better product and expect stronger sales. We roughly expect sales in the region of 100 units per month. The X3 will most definitely be a volume product. We think that the size of the car is just perfect. Its interior is very spacious, but it is not a huge car from the outside, so it is at home even in congested area. We think it will appeal a lot to the Indian customers

Any plans to produce BMW cars in India locally?

No we don’t have any indigenization plans as of now. The reason for that at current volumes it doesn’t make sense for us. As for having Indian suppliers, let me tell you that we already have 20 Indian suppliers who are already supplying into BMW network. However, we can look at local production only if we manage to reach sales close to 100,000 units per year. The impact of local production for a smaller business will be relatively small.

BMW has been rumored to be developing FWD cars. Is there a chance the company will break from tradition to FWD cars

I cannot comment on it. A variety of products are being tested, and the information on those will be revealed only as those products are ready.

A brief overview of Dr Andreas Schaaf’s life and career