7/06/2010 5:10 pm Motoroids NS Blitzkrieg rider Dr Arnob Gupta is all set to leave from Mumbai. He will be doing a route recce and will reach Delhi on the 10th of June.

We are glad to have MapMyIndia as our Navigation Partners for the trip. The company will provide us a tracking equipment, through which we’ll be able to trace the progress of the Doc LIVE. The tracking tool will be installed in his bike on the 10th. In a day or two after that, we will have a web page where his position will be shown Live. Stay tuned for more updates, and read the entire post to know more about Motoroids-MapMyIndia NS Blitzkrieg.

What is the North South Blitzkrieg?

Riding is a passion and a pleasurable activity. But riding continuously covering thousands of kilometers at one go is not everyone’s cup of tea. However, some endurance riders prefer riding long distance at some really serious speeds and create records which are extremely tough to be broken. When a rider decides to test his limits in this manner, he subjects himself to massive physical and mental strain and fatigue. However, such an act is not for the faint hearted as there is a considerable risk to life and limb.

The Motoroids North South Blitzkrieg attempts at covering the stretch from the Northern K to the Southern K of India i.e. Kashmir to Kaniyakumari in the minimum possible time. The current K-K record according to the 2010 Limca book of World record is held by “Shailendra Bharadwaj” and “Abhishek Beniwal”. They completed it in 4 days and 6 hours. Their journey started at 6 am on June 24 2009 and finished at 12 noon June 28 2009.  Motoroids along with our very own Dr. Arnob Gupta a.k.a. The Highway Man will make an attempt to break the current record and cover the stretch in a little less than four days. This attempt to break the current record will prove to be a source of inspiration to the young bikers of the country to test their riding skills at the limit. We are thankful to MapMyIndia for associating with us in the event. MapMyIndia will provide Motoroids the equipment to track Dr. Arnob LIVE on a map as he makes his attempt to break the record. 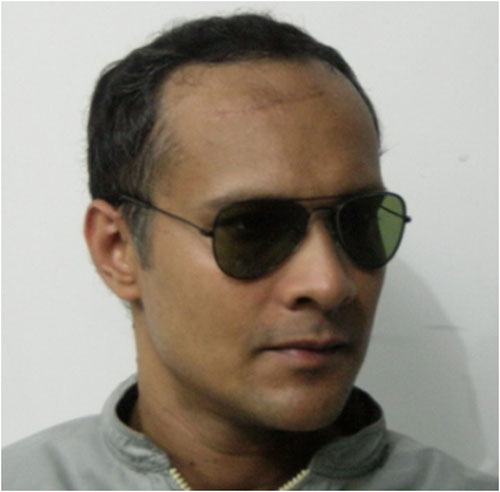 As mentioned above, Dr. Arnob Gupta will be attempting to break the current record in close to four days. This hasn’t been the first ‘long ride’ for Arnob popularly known as Doc. He has done more than 1600 km in 24 hours (IBA Saddlesore Certification), more than 2500km in 36 hours at one go (IBA Bunburner) and nearly 6000km in less than 5 days. Doc is one of India’s most experienced long distance rider/tourer.

Achievements of Dr. Arnob Gupta in chronological order, with some perspective:

May 2004: Fastest crossing of India EW on a CBZ. Limca record, still valid

Till then, nobody had even done the full distance – the record was from WB to Gujarat, not from Arunachal. The time Arnob took from Arunachal Pradesh to Gujarat was less than the time taken by the previous record holder traveling more than 1000 km less.

Sep 2004: maximum distance in one day on a Bike, 1340 km from Mumbai to Gurgaon, Limca record category since abolished.

At that point of time, nobody had done even 1000 km in a single day in India. The previous record had been set in Europe on a 600 cc bike. That distance has since been eclipsed by several people including Arnob himself by a wide margin, but at that point of time, it was a lot lot better than the next best.

May 2005: First Indian certified to complete 1000 miles in 24 hrs by the Ironbutt Assn USA, the world’s premier SAFE long distance riding body. 1751 km were covered between Mumbai and Ludhiana

There have been other attempts, but the second certified ride was in Oct 2008. That’s a 3 year gap. Doctor Arnob has since done this distance in 24 hrs on at least 4 occasions, but having been the first, did not apply for certification again.

Till date (3 years later) one other attempt has been made, not yet certified

Fastest time by far, and solo, the next fastest time has been 6 ½ days, that is more than 30% off Arnob’s pace.

Dr. Arnob will be joined by our Motorep for Hyderabad Prabhakar Rao for this record run. Prabhakar too will be starting off with Arnob, and try his best in matching or bettering the Doc’s time.

Prabhakar is a mechanical Engineer with Specialisation in Automobiles. He worked with a few MNCs for seven and half years before starting his dream project – Riding & Tuning of Bikes. Currently Prabhakar owns an online bike modification & accessory shop called www.probiker.in.

Prabhakar has  completed many long rides including a Leh(Ladakh) ride with a team of 15 members. The 20 day ride was 4000+ kms long. Apart from this Prabhakar has also done long rides like – Hyderabad to Goa, Mumbai, Chennai, Araku(Vishakapatnam), Banglore, Delhi, Munnar to name a few. Riding has always been Prabhakar’s passion  and his all time favourite sport. His previous bikes are RX-100( 37000km), Pulsar 150 ( 41000km), Pulsar 180 ( 8000km). Prabhakar currently rides a 0Pulsar 220 DTS-FI (28000km). Prabhakar claims that 75% of his usage of 2 and four wheelers is on the highways with majority of riding done in the nights. Prabhakar too, just like Dr. Arnob had a crack at the IBA Saddle Sore 1600. He is awaiting certification now. We wish Prabhakar all the very best for his mission. 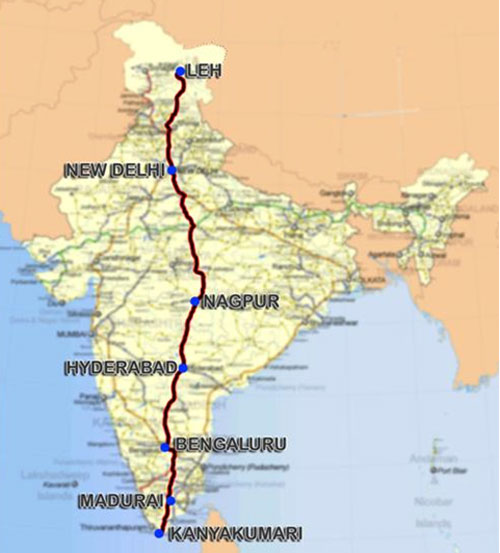 Benefits for sponsors who associate with the event

The ride is an ultimate torture test for an individual and it is our duty to get this attempt publicized throughout the globe across the biking fraternity of the world. We intend to spread the awareness about this attempt to break the existing record through our homepage as well as various social networking sites. There will be a live tracking page which will display the position of the rider LIVE on the map, along with other interesting facts such as average speed, current speed, and many more! NS Blitzkrieg will be a topic of great interest to all the national auto forum boards and other auto enthusiast communities. With so many opinion leaders talking about the event, the capabilities of the associated products will be appreciated by the audience.

The event is very unique and aims to create a record. There is a huge opportunity to tap national and local media on successful completion. We will provide a showcase of your product’s unique capabilities to a discerning audience which is looking forward to buy products such as yours. We can run a contest related to your product alongside the event, which will create additional interest and awareness about your products. The bike will have the decals of your brand prominently stickered onto it. This will ensure brand visibility in any coverage related to the event.