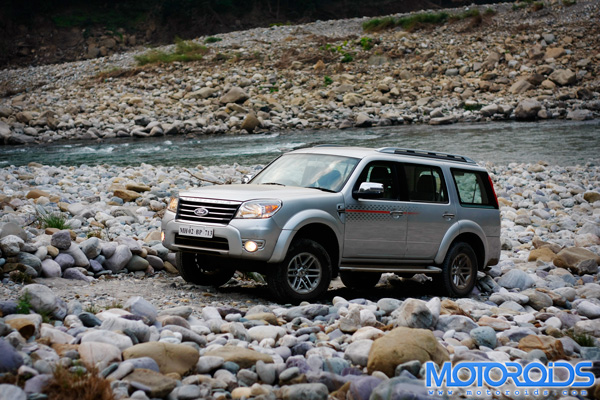 A picture gallery of the roadtrip can be seen at the end of the writeup, on the last page

Our journey to Corbett National Park started yesterday at approximately 2 AM. I even posted a few updates early on regarding the trip, but given the nature in which GSM providers operate in India, it was getting difficult finding a stable GPRS connection. But what was even more difficult was the on road traffic. We had planned our route and the timings for over two weeks now, but guess what it all went down the drain! ‘Traffic jams and eighteen-wheelers’ seemed to be the flavour of the day. From the tolls on the Pune-Mumbai Expressway to the entrance of Gujarat all we could see were endless rows of trucks piling up behind each other. The whole traffic jam debacle cost us a good four hours right at the start of our journey! 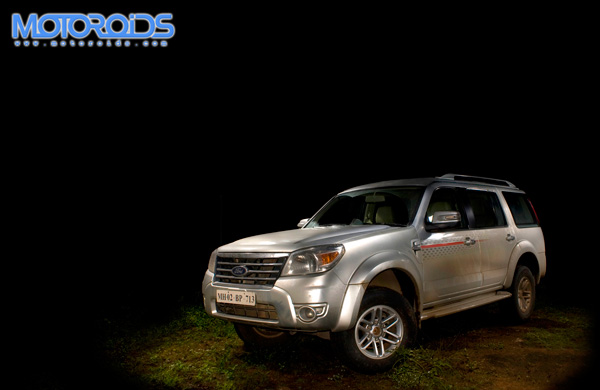 Like I updated last morning, we took a break at Kamat’s. Since the cops took quite some time to clear the tanker that had collapsed (and which we never saw), we decided to gulp down a heavy breakfast and not stop for lunch later to save time. Like I said, after a four hour burden added to our schedule, we ended up getting back on an open highway by as late as 10 AM. Once there, the Gujarat highway seemed like bliss. But as we moved on, tons of diversions were waiting for us, thanks to under-construction highway stretches, fly-overs etc. Manoeuvring a large SUV like the Ford Endeavour through traffic around the tight bottlenecks of the diversions, is a real pain in the you-know-what, especially when the truckers want to act bullish.
Speaking of which, we were comfortably cruising and gobbling up kilometers on the rest of the highway stretches, trying to make up for the time we had lost early on. But as we approached the Vadodara exit, (which we had to evade by the way, and head straight for Ahmedabad) a group of truckers pushed us from the right most lane to the left most one. What mixed a hint of confusion to this situation was a board that asked us to take a diversion for Ahmedabad, to which we fell for. Within a kilometre we understood that this new road we got onto was in fact the National Highway (No. 8), which was a puny two-laner and the faster and bigger E-way was running parallel to us. But there was no scope to make a U-turn again since the flavour of the day I mentioned earlier was spread far and wide across the other side of the road and we had had enough of it already! We continued down NH8, evading oncoming trucks & tractors and pesky Zen Estilos in a manner similar to the good ol’ Road Racer video game on an Atari. But believe me, it wasn’t one bit exciting. We finally did manage to get back on to the Expressway and were up to god speed again! But alas, the stretch lasted for a few tens of kilometres and got us back on to the National Highway soon enough. 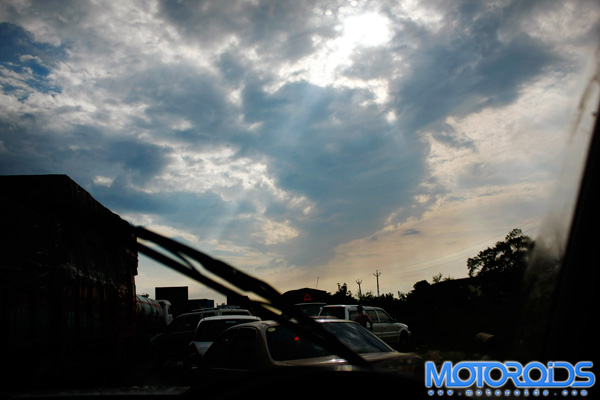 The Ford Endeavour needed a third tank up here, which we filled up at a Reliance fuel pump, a little short of Gandhinagar. Back to Road Racer mode again for the next 50-odd kilomters! By now, it was 7:30 PM and the idli – wadas from Kamat were completely absorbed into our blood streams by now. A re-fill was desperately needed. But we had this urge for some authentic non-commercialised dhaba food and so the search for such a place began. We did find a couple of them early on, but we were still in Gujrat. What that means is, it is hard to find anything other than Dal-Bhati. We wanted more options, preferably the ones that could silence the ‘devil’ in us. We cruised on, and the search added a few more valuable minutes to our already off-schedule journey.
About 100 kilometers short of Udaipur, we finally found a place that met our expectations. There were a dozen trucks parked out there, a few khatias lined up below dim blubs and smoke rising out from the small kitchen’s burning choolha. There were only a few dishes to choose from, but they were exactly what we would have ordered even if they had a menu card. Dal Makahani, Rajma, Chicken Fry, Chicken Masala, Makke-di-roti and Chaas – sounds tempting doesn’t it? Believe me, it tasted way better than what it sounds! I’m typing these words approximately 9 hours after we had that food, and I do not have any sort of upset organs yet, so I guess the food was safe too for all those who care… 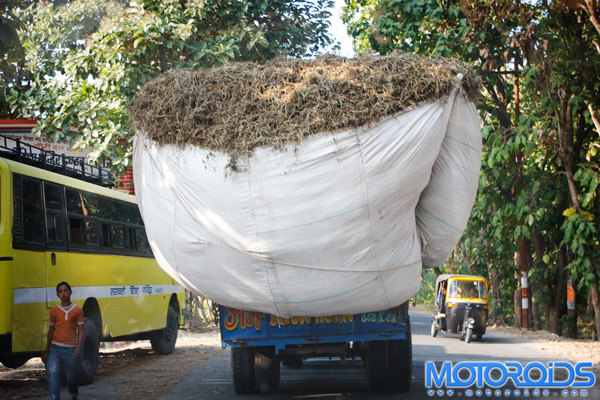 After downing the food and gulping endless amount of chass, we got back on to the highway. Within 10 kilometres of driving, I understood the reason behind truckers acting so groggy all the time. After such tasty food and the addition of alcohol in the equation for some of them, the poor truckers are bound to feel sleepy, especially on the monotonous highway stretches. The same happened to us – the food had us wanting for more but the greed had led to heavy bellies that needed the body to rest. Sleep was slowly creeping onto our eyes, and believe me, such a situation is more dangerous than drunk driving itself! Udaipur was still quite a distance away. We decided to take a break, a power nap in fact, before continuing further. And so we did, a 30 minute nap should have ideally done the trick. But it did not. Even after the power nap sleep started coming back soon enough. The glaring lights of the on-coming traffic made things worse. Thankfully though, Udaipur was just a few kilometres away. Tiptoeing safely on the left most lane, we somehow passed the Udaipur border. 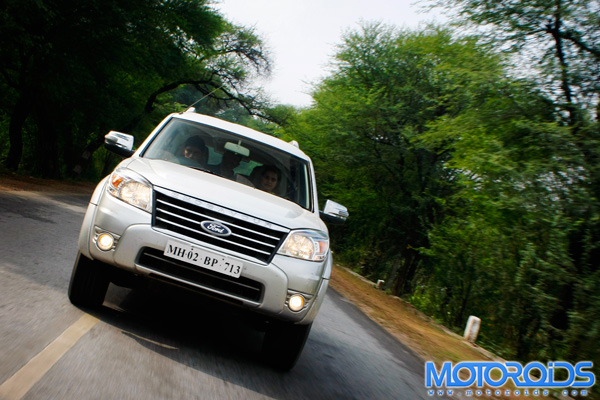 A noble friend had advised us about some hotels managed by the Rajasthan Tourism, were supposedly cheap, clean and decent places to spend the night at. But they were as hard to find as they sound. But within a couple of kilometres of crossing the Udaipur border, we found this oddly lit place on the other side of the road. With red, green and blue lights illuminating a fort-like structure, this hotel looked more like a brothel than a lodge. But since we had limited choices and sleep was catching up faster than the trucks around, we thought of checking out the place from inside before jumping on to conclusions. The entrance opened into a restaurant with one corner acting as the billing counter as well as the reception. A well built Rajasthani by the name of, Jawahar, stood there to welcome us. We told him what the situation was and he smiled and said, “Aap jaise bahut saare tourist rukte hain yahan. Aap don’t worry karo, will help you.” The two bracelets in his wrists banged repeatedly against the table as he uttered his words. He led us through a narrow corridor and showed us the rooms. While the rest of the setting did look like a brothel early on, the rooms were actually decent sized and clean! And at Rs. 600 for a day’s stay, they sounded like a steal! We booked them, got our stuff into our respective rooms and dropped onto the beds like lifeless rag-dolls. After a sound sleep, that hardly had any dreams in it, I’m back up now, writing this piece as I wait for the bucket of hot water to come. Yes, we are in Rajasthan, here water in itself is a luxury, so hot water is a precious item that is served to the room only against order. We’ll resume journey in a bit now and I shall try once again to bring you the updates. 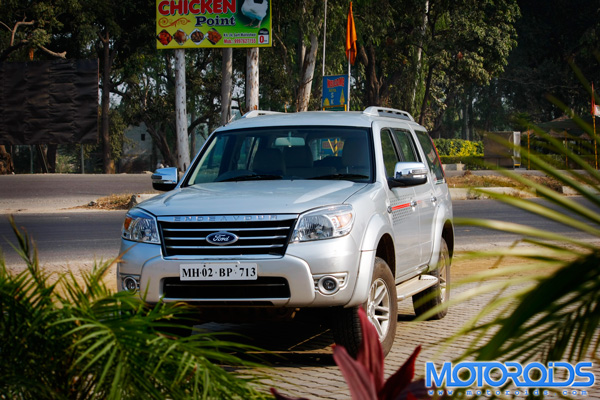