Home Features Mahindra XUV500: All the features explained through pics 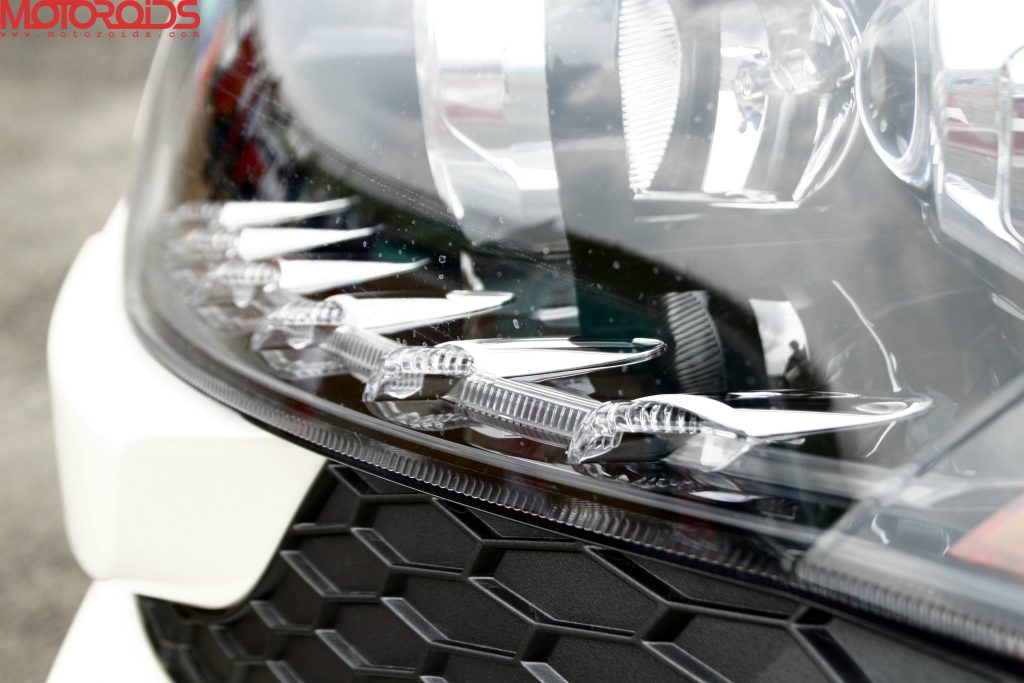 The LED parking lights look nice both during the day, and in the night when lit. They are not daytime running units.

The XUV500 features glass mountd antenna. The first two lines on the rear windscreen receive radio signals, which are further amplified before being delivered to the 6-speaker audio system. Rear wiper and washer is a standard fitment on both W8 and W6 variants

Black plastic cladding on the lower portions of the entire SUV. Adds to the tough look, and is pretty well finished too.

There is a s business cards holder in the glove compartment, something you would rarely come across in a car.

Parking sensors work in tandem with the Parking camera. The display would ask you to stop if you are any closer than 50mm to an obstruction. The camera is not available as a standard fitment. These is a proper arranagement for it though. You will have to buy the camera separately as an accessory.

Automatic light sensing headlamps feature needs to be activated with a button on the stalk behind the steering wheel.

The rear wiper washer refiller cap is positioned behind the final row of seats.

The screw to lower the spare wheel located below the car. Tyre monitoring system on the XUV500 keeps a check on spare tyre’s pressure as well. Amazing, isn’t it?

Provision for a parcel tray as well. The tray is not available as a standard equipment though. You can buy it as an accessory.

Storage net, A/C flow controller knob and a bottle holder for the third row of seats.

Hardly any storage space behind the third row of seats. Innova is better in this regard. You can hardly put a suitcase here. Flip the floor panel up and you’ll see the wheel replacement kit.

Why, Mahindra? Why would they have that weird looking shape on the tail-lamps? Why? Looks cheap. Would have understood had it read XUV500, but what on earth does that image signify?

The dashboard on the left is home to an extra storage compartment just above the glovebox. Notice the new design air vents and the textured finish on the dashboard plastic’s surface.

Upholstery and seats look plush and comfortable from outside.

Center console overall layout is good, but doesn’t make you go wow with its finish. Thoughtfully laid out buttons make usage a breeze while on the go.

The graphic says it all. The XUV500 is indeed the most fuel efficient SUV around!

Mahindra have used a new kind of material for the roof. Soft to touch and texturized for visual appeal, the material is a refreshing change from the usual fabrics used to cover the roof. The material on the dashboard is different from the one used on the roof, but matches it exactly in terms of texture.

Vanity mirrors for both driver and front passenger

As we told you earlier, the rear view camera doesn’t come as a standard fitment. You will have to buy it and get fitted as a Mahindra accessory

Door pockets have ample space. There is a slot for a 1-liter water bottle and enough room for plenty of other knick-knacks.

Lumbar support adjustment knowb for the driver and the central front armrest.

Civic inspired handbrake is one of the tacky bits within the cabin. Doesn’t feel very nice to operate and the lever rubs with the walls. See the scratches on the base of the lever as proof.

Central armrest houses a chilled space for as many as four soft drink cans.

Instrument cluster is one of the highlights of the XUV500’s cabin. Looks simply fantastic with its unique design and the generous amount of info it provides.

Somehow, the cabin of the XUV500 looks more upmarket in the premium in the night than during the day. Plenty of lamps inside the cabin, tastefully chosen materials and ambient lighting goes a long way in elevating the premium feel inside

ORVMs are quite curvaceous when compared to the rest of the body and feature mounted blinkers. Could have been more angular and sharp in our opinion

The unique design of the A/C vents doesn’t impress us much. Would have preferred a simpler, more elegant design.

The XUV500 wafts past you. Sounds very smooth and silent from the outside. Truly looks like premium vehicle as it moves past you.

Unlike the third row of seats, the second row is 60:40 split foldable.

Second row doors have space for a bottle and then some.

Head and legroom in the second row of seats is very generous.

The overall finish of the interiors is fab. No inconsistent panels gaps, no edges and the materials used for various handles and locks are of a high quality too.

A/C vent for the second row of seats.

Brake pedal feels soggy. Doesn’t have the bite and feel and requires some getting used to. Overall experience for the legs in the footwell isn’t too great. The pedals don’t feel to that of a premium car.

Bamboozled, why that design was used on the tail-lamps. Looks cheap.

Additional storage compartment above the glove box. Seems like Mahindra have tried hard to compensate for the lack of space after the third row.

The Gearshifter stick. Pull up the ring below the main knob and move it to top left for engaging reverse.

Buttons and knobs look nice but lack the finesse and feel that you get in a true premium car. It’s all good though, much more than that you’d expect for the price.

Audio commands, reset, Cruise control. Press the + button for more than 3 seconds to engage cruise control. Use + or – again to increase decrease speed. Use Cruise Off button to disengage.

The engine is silent outside, but there is quite of bit of engine sound coming in. It increases as you press on the pedal. It doesn’t however translate into vibrations or reluctance to rev up. The engine feels smooth and eager to rev up.

There are 2- tell-tale lights in all between the two dials. They indicate Hill hold control, Hill descent control, ESP and cruise control among others.

Just look at the area above the number plate. The black plate with the Mahindra emblem. Now look at the creases emanating from it from both ends. Together, doesn’t it look like a moustache? A hybrid of those of Hitler’s and the Air India’s Maharaja. Doesn’t look very convincing to me.

The tyre pressure monitoring system screen. Notice that it displays the status of the spare tyre as well.

Twin black inserts on the front bumper on both the flanks. Makes the front look too loud. Mahindra designers could have done with only the lower strip, or none. Would have looked more sophisticated

The honeycomb mesh behind the front grille feels plasticky and flimsy. See how it goes in without having to apply much force.

Tail-lamps not very aesthetic. A letdown when compared with the sexy lamps upfront.

Storage net behind the front seats

Door handles a new design, but dont look very sturdy. There is a plasticky, weak feel about them.

An adult can hardly fit into the third row. Innova has more space.

Entry for the third row of passengers

Spare wheel under the car’s body.

Lever to collapse the third row of seats accessible from the boot.

Looks nice on the move, doesn’t it?