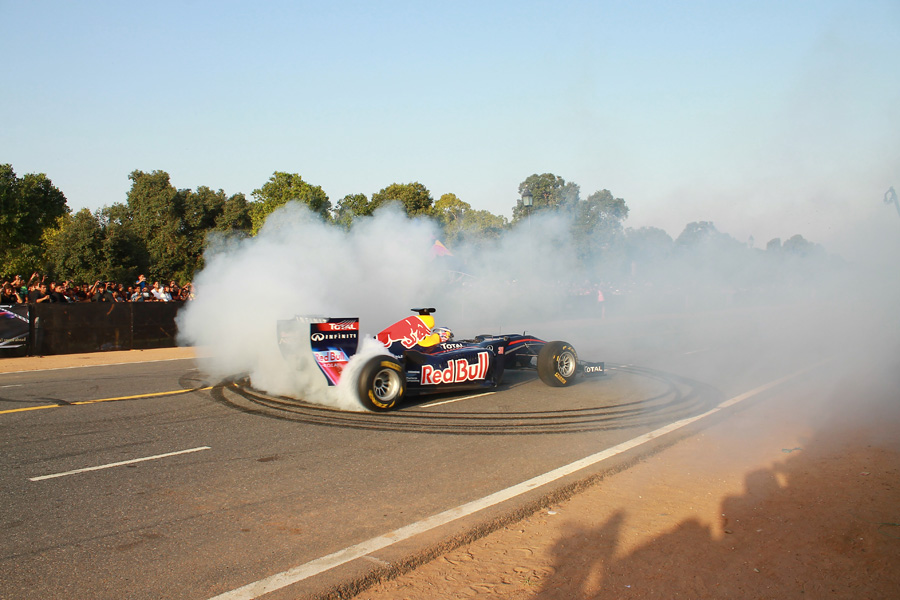 The event signaled the last lap of Red Bull’s activities in the lead up to the 2011 Formula One Grand Prix of India. Red Bull Racing fans, Formula One enthusiasts and other onlookers thronged the streets to catch a glimpse of the Red Bull Racing Formula One car which fired down the stretch, clocking speeds of over 300kph.

Keeping up with the Formula One car were the Ghost Ryderz – one of India’s top professional stunt bike group. Impressing crowds with a mix of jaw dropping wheelies and stoppies, the Ghost Ryderz set Rajpath on fire, defining precision on two wheels. Not to be left out, some of the best drivers in India took to the tarmac in Renault Koleos’ balancing acceleration and braking to the tee. That resulted in perfect synchronized formations with of course, screeching tyres and the smell of burnt rubber.

“It was a proud moment for me to be the first Formula 1 driver to race down the iconic Rajpath. Today’s drive was truly exhilarating especially with the legions of cheering fans who lined up the road. I’ve never seen anything like this before but I’m sure that Red Bull has set millions of pulses racing as India waits for the lights to turn green at the Grand Prix later this month,” said Daniel Riccardio

Here we have a whole bunch of pictures from the event. Enjoy!