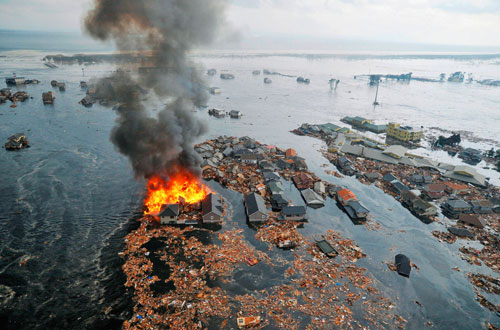 The triple whammy of earthquake, tsunami and a nuclear meltdown has thrown life and industry in Japan totally out of gear. Our condolences to those who lost their loved ones in the disaster and to those who got injured. It’s a tragedy of the highest order, and we hope and wish that this great oriental country emerges stronger from the disaster as it always has in the past.

Unlike what some of the newspapers are reporting, the auto industry in Japan is hit badly with the disaster. The disruption caused by the tsunami waves and the earthquakes will be more intense than initially thought.
Reports emerging from the Land of the Rising Sun suggest that several car makers including Toyota, Honda and Nissan have stopped production and won’t resume for at least a week. While these companies may not have experienced any substantial first-hand damage, some of their suppliers have been badly hit, and it’ll take them some time to recover. Apart from this, logistics have suffered a hit with rail networks and roads being submerged, only adding to the problem.

Power supply has taken a hit, ports, from where the cars are shipped have been shut and labor is on a leave. There is no production happening at most Japanese car making plants, and the situation is expected to remain that way for more than a week.

While tier1 supplier are always located in the vicinity of big car plants, especially of those companies which follow just-in-time inventory systems. However, there are smaller suppliers which are located in areas which have been severely damaged. It’ll be long before these suppliers could resume production, and there don’t seem to be many alternatives in sight.

The tragedy is bound to affect the Japanese carmakers. Talking about bigger markets like the US, some of the popular cars like the Accord and Camry are manufactured locally. However, some other important models like the Toyota Yaris, Honda Insight and the Honda Fit / Jazz are made in Japan and won’t be available readily in the coming months. This will in all probability give the European and American carmakers to extend their market share, by a wee bit.

US and European car makers depending on Japanese suppliers will also be affected, although not as much as their Japanese counterparts. No matter how much the impact of the tsunami is played down by the media, it is going to affect the Japanese car industry negatively. We hope the country manages to get back on its feet firmly as soon as possible.