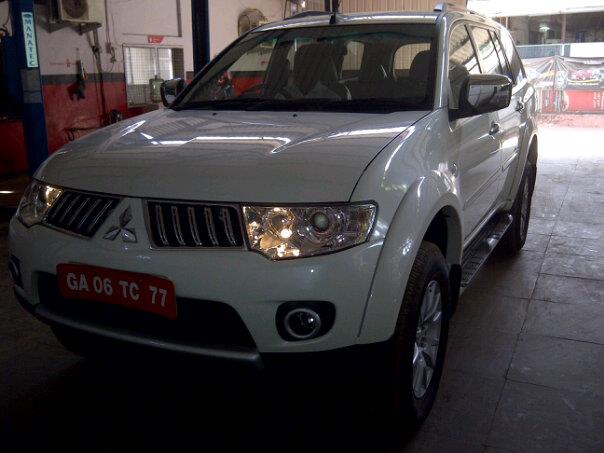 We recently posted that Mitsubishi Challenger will be launched in India on 12th this month, albeit, as the Pajero Sport. Now, we are posting exclusive pics of the Challenger, nay, the Pajero Sport on Indian soil. The Challenger started its life in 2008 and it took a fair time to come to India. The Pajero Sport gets the same 2.5 litre diesel engine that is internationally available in the Challenger. This oil burner pumps out a healthy 140 Ps of power and it is said that the engine is fine tuned for fuel efficiency.It may be noted that we had been hoping to have a rendezvous with this vehicle back at the recently held Delhi Auto Expo. However, Mitsubishi had to opt out of it as it ended up having to delay the launch owing to the devastating floods which gave a blow to its production facility in Thailand.The Pajero Sport comes with an All Wheel Control Super Select 4WD mechanism which makes the vehicle quite a capable soft roader. The Pajero Sport will come to India in a 7 seater avatar with 3 rows of seats. It will also come loaded with active safety features life ABS and EBD and dual front airbags.The Pajero Sport will be launched in India initially as a CBU import. However, if the vehicle gets a good response, safely expect Mitsubishi to start with assembling the car in India. It may be noted that the very capable and our favorite Mitsubishi Outlander could never really do well in the market. Primarily, the lack of a diesel engine proved to be quite lethal to the handsome SUV.

Mitsubishi is surely getting aggressive in India. The manufacturer recently offered a huge price cut on the capable yet underrated Cedia sedan and is also planning to launch a 7 seater version of the Outlander. Now, with the Challenger diesel coming to us, Mitsubishi might ultimately end up getting the better of Toyota, provided, it puts a competitive price tag on the Pajero Sport. Stay tuned folks!