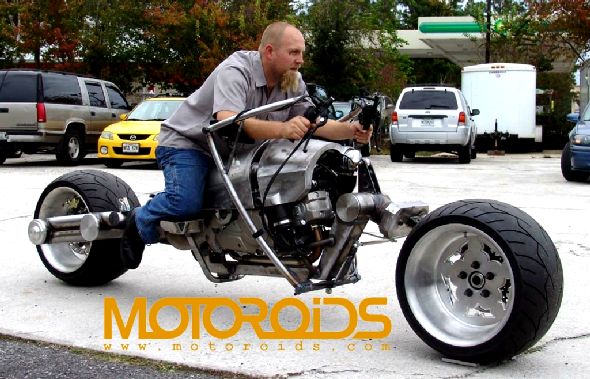 (Noon time, the house owner is departing for work, his butler stops him for a query..) Butler: Would you be wanting the Honda sir? Master: In the middle of the day James, not very subtle. Butler: The PS-Pod then….much more subtle!!

Wasn’t the Batman ejecting out of his mangled Batmobile in an utterly different & never seen before type of contraption, an electrifying sight?? Heck yeah! It really was. And ever since The Dark Knight debuted in ’08, fans and bikers all over the world have gone gaga over what they say is the coolest motorcycle on the planet, the Batpod. But, could it be built to suit a more street oriented style of riding? Oh yes and it was about time someone pulled this feat off. Enter, master custom builder Dave Welch of Choppercity based in Florida USA.

Taking inspiration from the movie, Dave set his sights on making a real world/ practical Pod which was rideable. Since the bikes drive train was completely different, was based on the front axles of the Tumbler and it had no handle bar for steering, it really was a tough job in hand. So, to begin with, in came a seat instead of the aggressive crouched riding position, an Aprillia 850cc A/T engine along with those humongous set of 18” chopper wheels sized 360/13 each. Chris Corbould(special effects co-ordinator best known for his work on TDK and other major blockbusters) had plonked a 250cc Honda 2 stroke engine in the original Pod & it weighed around 300 kgs. Getting rid of the weight was a key issue. Also, the original  chassis was  the exhaust itself, so making a real world replica was tricky since weight issues had to be kept in mind. Dave used metal fabrication for the entire chassis and once done in came the engine. In fact he was able to create space for a proper gas tank and a speedometer as well which gets nicely tucked under the frame, with the help of clever pneumatics! Once put together everything was powder coated in black and in order to keep the immaculate attention to detail, guns, a grappling hook & lights were fitted at the front.

And, after a considerable amount of testing, the Caped crusaders bike was on the street replete with mirrors, indicators and lights in perfect working condition. In fact there’s space for a mobile holder as well! A similar model resembling the movie Pod went up for sale on eBay last month which had the original humongous Hoosier tires. In fact the ‘Pod has already been bought, by an Indian, Mr. Pankaj Shah( hence the bikes name PS-Pod bearing owners initials). But nothing to worry Bat-fans. Mr. Welch is undertaking orders, contact him at: www.choppercityusa.com

Till then, drool on these hi-res pix and videos. It makes superbikes look like toys and has sheer street presence. With the amazing riding position & steering free style of riding, this baby makes for one hell of a fun ride. Don’t be surprised if you find one besides you at the lights!

And as the Joker says,’ ooh, I like that!’ We couldn’t agree more.

Oh, and if you think this can be done only by someone sitting in the US of A, wait till we bring to you India’s very own version of the Bat Pod – crafted by the very best in the business – stay tuned!

More hi-res pictures of the DAVE WELCH, along with the fabrication process images can be found on Motoroids Forums. Join in the discussion here!

More hi-res pictures of the DAVE WELCH, along with the fabrication process images can be found on Motoroids Forums. Join in the discussion here!