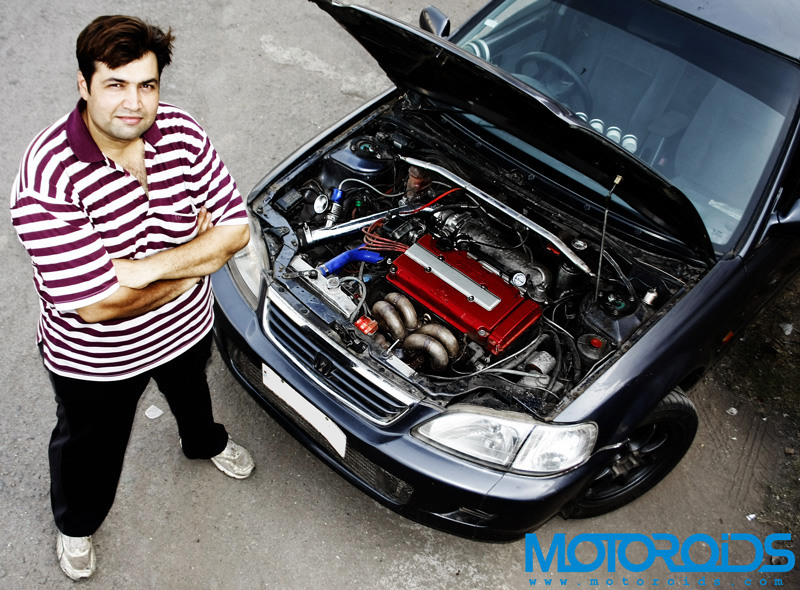 A ride in Jitendra Suri AKA Jeetu‘s monster City VTEC – an insane experience!

I almost bought a pair of diapers on my way to see and experience this car. “Frail hearted wet their pants as the turbo of that monster spools up” announced my friend Venkat who had sampled the car earlier, as a description. The things he told me about this contraption comprised of stuff legends are made of. He was talking about a setup potent enough to put out more than 400 horses at the crank, housed within the humble bonnet of the first generation Honda City. I wouldn’t be a motoring journo if I didn’t do all I could to experience this lunacy.

The most astounding aspect about this baby is that it’s the epitome of a sleeper car. Apart from the huge end can hinting at something fishy under the bonnet, there isn’t a way to tell this ballistic missile from a regulation City car. Even the humble Exi badge has been kept in place to make sure that no-one could ever suspect the mayhem this beguiling warhead encapsulates. It’s a highly concentrated dosage of Ecstasy in a ubiquitous aluminium foil packaging labelled ‘Crocin’. To a more trained eye, some big radiator bits trying to peep out of the grille should send out a hint, but there aren’t many mortals to have that sharp an eye for detail.

Enough blabber. After being thoroughly impressed by the deceptive cladding, it was time to experience the shock and awe. I strapped myself in a cabin which would give a light aircraft a good run for its money for the most no. of readouts accolade. There is an array of analogue clocks on the dashboard, and towards the right of the instrument cluster there is the big daddy of all the meters, depicting rpm. Each one of these readouts is utterly functional and is monitored by Jeetu regularly to keep things in order. There is nothing else that marks an aberration from the stock cabin. 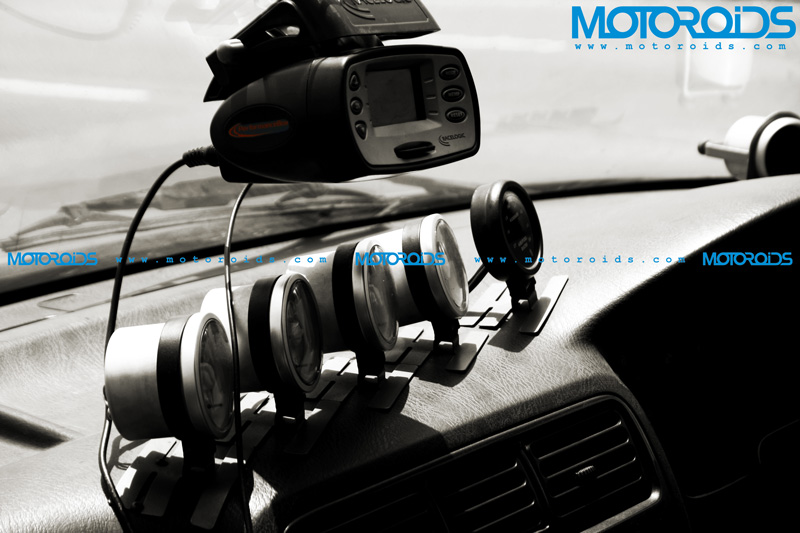 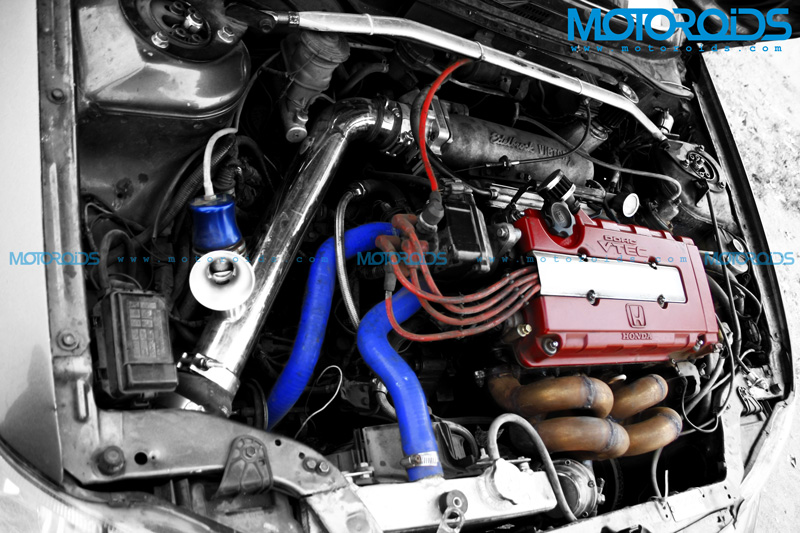 I have installed the VBOX data acquisition gear, as Jeetu, having turned the ignition on is waiting for the traffic to clear up for a quick 0-100 sprint. On our way to the expressway, he overtook our Figo while wheelspinning in third gear, leaving us in awe. This test is going to be an occasion – no two ways about it. The engine is humming pleasantly and everything seems and feels usual, except for a profound feeling of anticipation that sends pulsations from head to toe every 2 seconds.

Launch time. Jeetu builds the revs and I suddenly witness a cute kitten transforming into a man-eating monster – showing its line of bloodied canine teeth and sharp claws, emanating a crazy roar through its engine and exhaust that’d make the frail hearted prepare to put the diapers on. It’s not the time yet, for me at least. He revs the engine up to 5000rpm. I would bet both my arms on a massive wheelspin and a serious loss of time owing to more power than the tyres could handle. I am right, the wheels start spinning violently in their place, and the car starts off with a judder – there is no way this guy can let the turbo kick in, in the first gear at least. 400 horses would just shred those tyres apart in a jiffy without letting the car move a foot – so he shifts into second, just before the turbo kicks in. Unfortunately he cannot wait for the turbo to spool up in the second gear either – the power is so overwhelming that it makes the wheels spin in place even in the second gear – and so he shifts into third, unable to tap even 60 percent of the powerplant’s potential and wasting a lot of time making another shift. 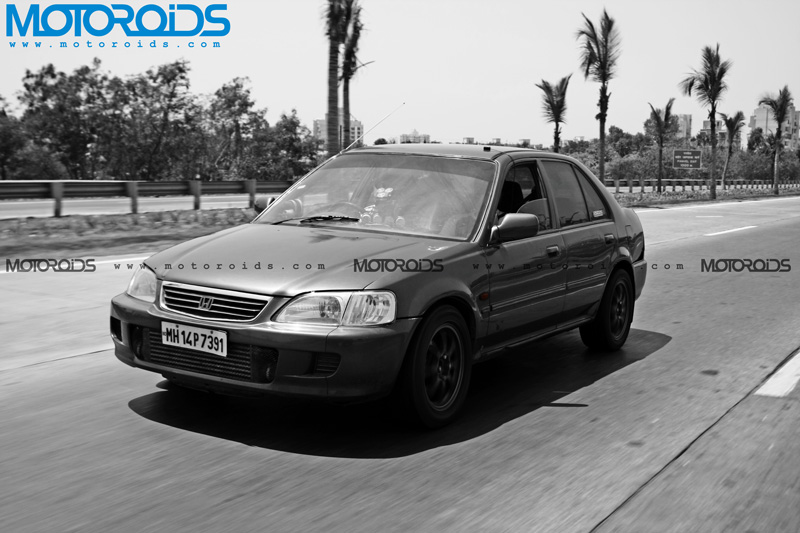 HOWEVER, after registering a 0-100km/h sprint time of 6.0 secs (which is way, way less than what it should be, under 5.0s is what Jeetu expects) on the VBOX, Jeetu decides to show me the real talent of his baby. He takes the rev needle past 5500 rpm in the third gear, where the engine is still seriously threatening to overpower the traction of the wide 205/50/15 Advan Neovas tyres and succeeding reasonably at its attempt, making the rubber emanate loud squeals as Jeetu keeps the throttle floored.

At this juncture, with the turbo properly spooled up, the car running third gear at 6000rpm and the footwear on the wheels, after the initial struggle finally managing to gather some traction – this car finally shows me what it’s truly capable of. At this point the lunatic acceleration pins me back into the backrest of the seat in a properly undignified and disrespectful manner. What I see at the edges of the front windscreen looks like the smudged version of a real life picture taken from the passenger’s seat – everything seems blurred. The world around me has transformed, what looked like a spot on the windscreen a second ago keeps getting transformed into a Totoya Qualis or a truck or another sedan. Vehicles doing respectable speeds appear like projectiles shot at us from the horizon as we overtake them – we are going past them faster than you go past stationary objects in an ordinary car. And all this happens in a matter of a few seconds after the turbo kicks in, 6 seconds, if I may be allowed to extend the period a bit. By this
time, we are already nudging 200kays and going by the sadistic manner this car is still lunging forward in, it won’t take more than a few more seconds before we get airborne. So I put on the diapers finally and tell Jeetu to slow down. 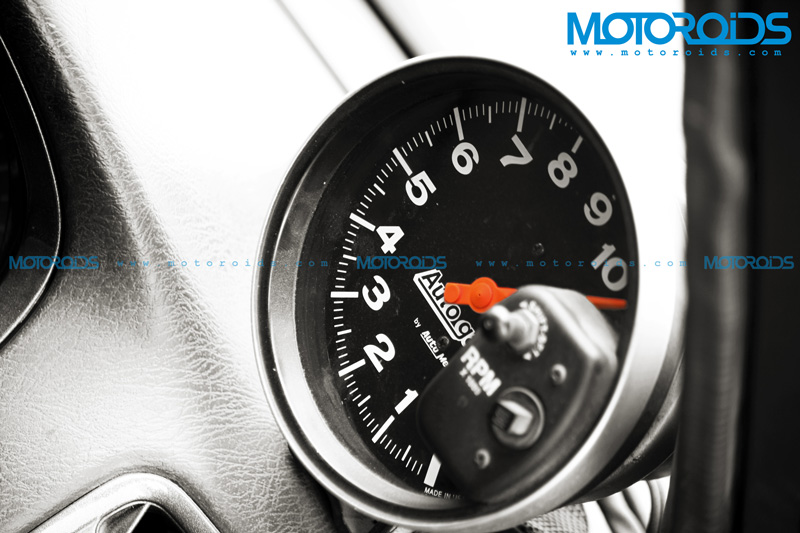 It’s not that I haven’t driven fast cars. From the AMGs to the big-ass Beemers, I have been behind the wheel of most of the exotics, but this one here is a different beast altogether. The noise of the engine and the exhaust in the cabin, the violence exhibited by that turbocharged B16 engine (sourced from an earlier Civic Type R), good for 160 horses in NA version, the two and a half years of crude sweat and hard work that have gone into the engine bay, the shakes, the rattles, the vibes, the drama – all of it make this machine one hell of a hairy, scary and utterly exciting animal. This one is a far cry from the sophisticated thrust of the German exotics – this is well and truly a supercar made in India, by an Indian, with all the characteristics of the mayhem that we represent as a nation. This is an experience that’s unmatched by any, I repeat, any other car that I have ever driven, by virtue of the perspiration that has gone into it, and the drama that it so violently unleashes after so deceptively making you reach a point where most other cars are redlined at!

It’s not that Jeetu hasn’t done his bit to enhance the predictability and sturdiness of the car at high speeds. The entire chassis and the suspension system have been reinforced with an array of modifications going in to stabilize the body behaviour. However, as I see the car from behind, accelerating away into the horizon, it’s not tough to notice its bouncy ride owing to the stiff suspension setup and the apparent struggle of the tyres and their failure to stay at ease as the resident power demon tries to skin them. The car slides and slithers every time there is an enthusiastic dab of the rightmost pedal in the driver’s foot-well. This car demands respect, and calls for an utterly responsible pair of hands at its wheels, and it’s nice to know that Jeetu fits the bill perfectly. Humble to the core and impossible to be prodded into doing something stupid on the streets, Jeetu is just the right driver to handle such brute force. It requires a certain degree of humility, intelligence, wisdom and temperament to build something like this, and Jeetu has all these qualities. There is a reason why he has managed the impossible – he talks less and does more, has the perseverance and patience to accept failures, he looks forward and goes about his job in a silent, dignified and undeterred manner. 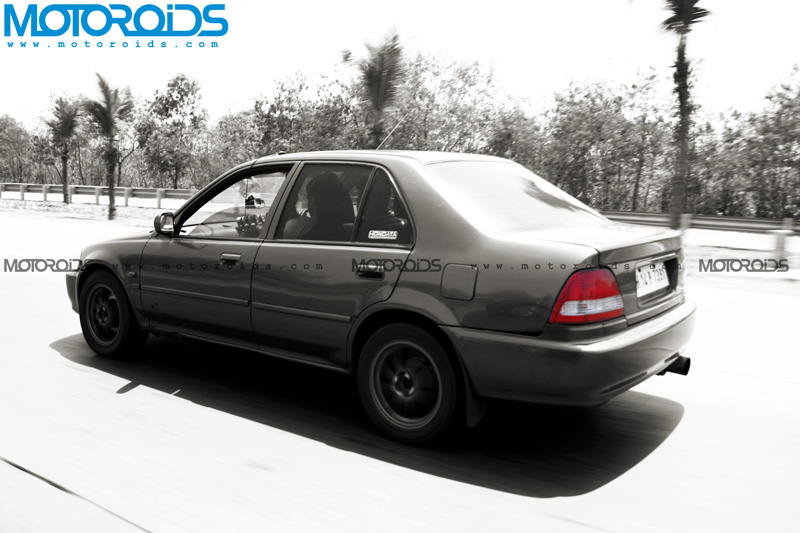 The amount of effort and hard work that Jeetu has put in his car is incredible. That ordinary looking masterpiece is nothing less an offspring to him, a possession that people would murder for if someone tried to inflict any damage on it. Any misbehaviour to such emotionally dear objects causes a very violent reaction in some of their owners. As I met Jeetu for the first time, he offered to clean the car to make it look better in the pictures, and won’t let anyone else touch the wiping cloth – he believes in the dignity of labour. As he goes about his task of cleaning the dust from the car’s surface, a boor in a WagonR, while reversing the car backwards slams its rear into Jeetu’s stationary City’s rear fender and bumper. It’s easy to lose temper at such occasions, especially when the victim is a prized possession as his car. But Jeetu isn’t among the ones who lose it so easily. He inspects the damage, turns towards the driver, politely tells him to be careful in such situations, and lets him pass.

With no airs about his knowledge and achievement and no false pretensions, Jeetu is a man with a heart of gold – humble and genuine to the core, he is a gentleman tuner personified. The man now awaits a set of slicks to be able to convert those crazy horses into some insane timings. Much respect! 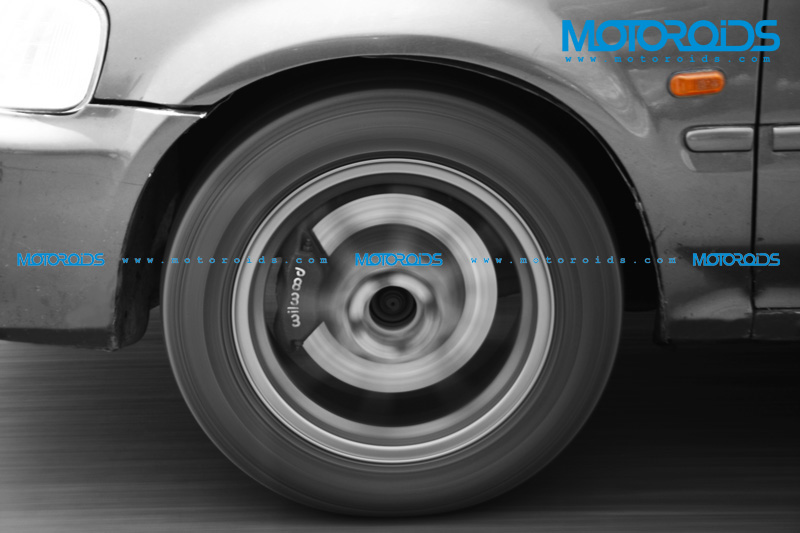