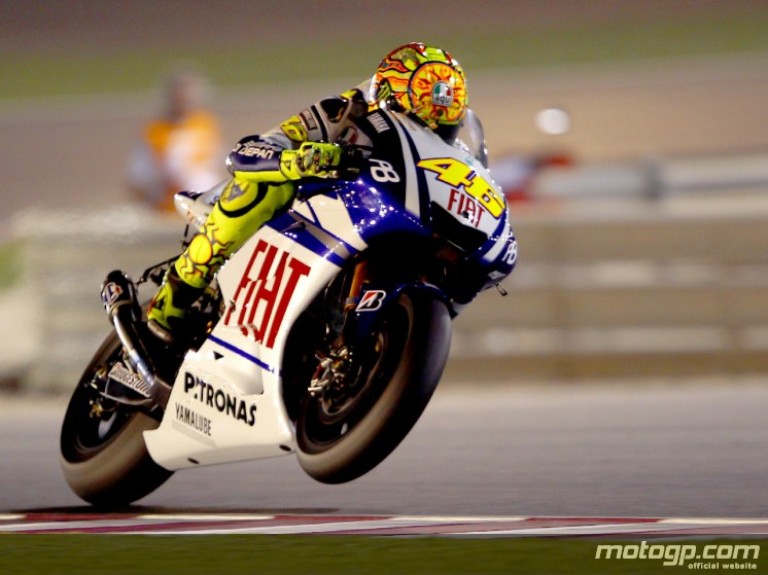 The 2010 season Motogp season started under the spectacular floodlights of the Losail circuit in Qatar. This year the conditions were more than perfect for the race. As many as 6 rookies made their debut in premier class of racing. As usual it was a routine practice and qualifying performance from Casey Stoner at this circuit as he dominated all the sessions. Alongside him were Yamaha riders, Valentino Rossi and Jorge Lorenzo who qualified 2nd and 3rd respectively.

It was a perfect start for Rossi and Pedrosa. But it wasn’t too difficult for stoner to catch them as he made his move soon and was leading the race in third lap of the race. At this stage Rossi and Dani were battling hard with each other which was all going in favour of Casey as just after 4 laps he managed to create a gap of 2 sec over Rossi. Just as it was all looking great for stoner, he suddenly crashed at fourth corner and couldn’t manage to get back on bike. The surprise of this season was Nicky Hayden who was up into 3rd spot and was able to tame that new 2010 Ducati Desmosedici. The hard work done by Ducati was clearly visible  as he was riding the new big bang Ducati like he always wanted to. After few laps Dani wasn’t able to keep up the pace with the leaders as he fell back due to suspension problems. Now the race belonged to Rossi, Dovisiozo and Hayden. They kept fighting hard with each other for few laps. Rossi was playing his all tactics to keep both of them behind him. By this time front leading group was also joined by Lorenzo and Ben Spies who wasn’t performing like a new entrant at all. He was quite comfortable and fast on a Moto GP bike. Towards the end of the race Dovisiozo was trying every possible move on Rossi but it was quite hard to outbrake the champ.  The Honda was looking strong on the straight, pulling ahead of the Ducati and seeming to gain on the Yamaha.  Dovi made the move on the straight at more than 200 mph, with Rossi forced to overtake on the brakes in Turn 1. Later  Rossi was able to keep the gap more than a second.

Gaining significant ground in the closing laps, Lorenzo first took aim at Hayden and then Dovizioso, passing both challengers on the penultimate lap. Hayden then made a play for the podium on the final lap. The Kentucky Kid got around Dovizioso, but the Honda rider caught the Ducati at the line by a scant 0.011 – the two side-by-sides at the checkered flag. 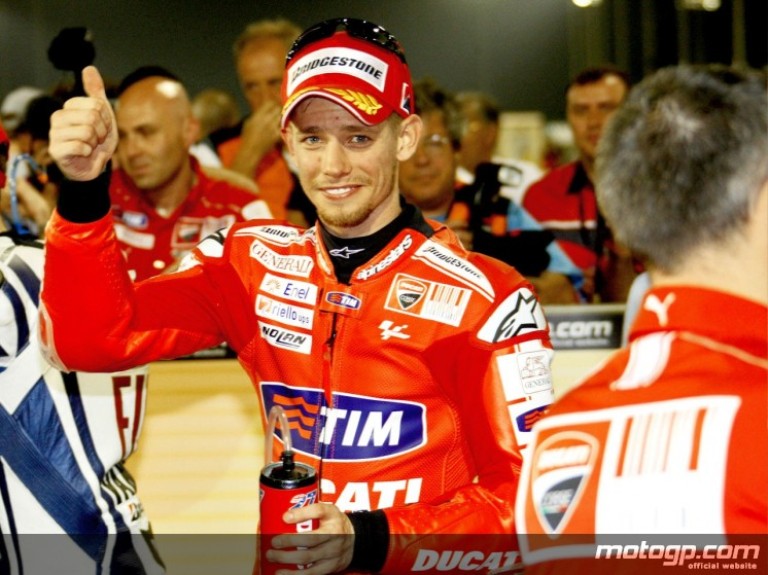 The two Fiat Yamahas celebrated the first of what is certain to not be last 1-2 result for the Factory Yamaha squad. After the race Rossi was delighted with the win,“I haven’t won at the first race since 2005 and these 25 points at this stage are like gold dust, it’s a fantastic result for the team to make a one-two at race one,” said  Rossi. “It’s especially good to win here because it doesn’t suit our bike, we worked very cleverly throughout the practices and this is the reward, so thanks to all my guys. We definitely have some work to do but this is a good base to start from.” Dovizioso’s third-place finish spoiled a confidence-boosting podium for Hayden, who finished fourth. Spies completed the top five just two seconds adrift of Hayden, an encouraging start to his GP career and the highest-finishing rookie.

It wasn’t a good day for Pramac Ducati as both of their riders were crashed and out of  race. De Puniet held sixth, ahead of Pedrosa, who sunk back to more than 16 seconds off the leader’s pace. Edwards took eighth, leading a group that included Loris Capirossi, the Rizla Suzuki rider celebrating his 300th GP with a ninth-place finish. Interwetten Honda rider Hiroshi Aoyama rounded out the top ten, the second-highest finishing rookie. 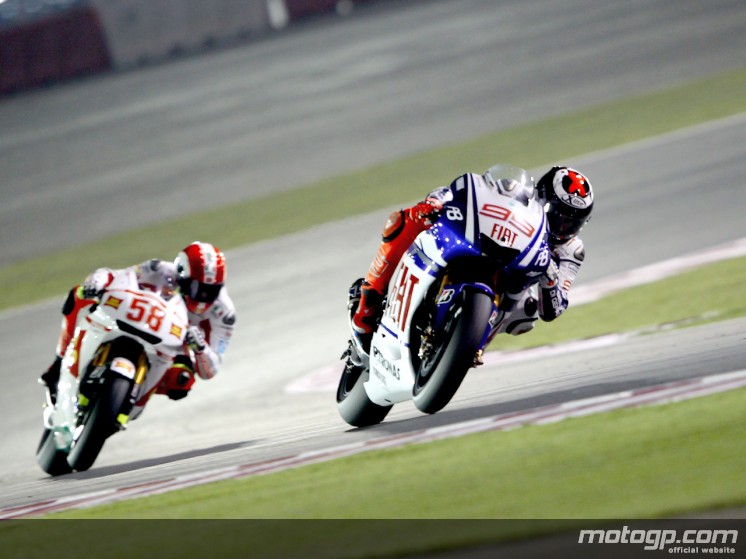