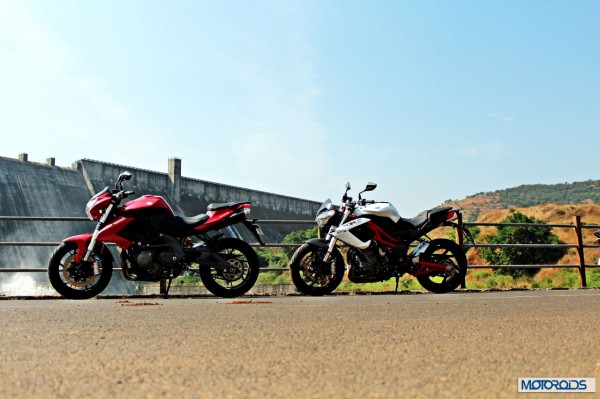 Spring in my feet, as I walked into the DSK showroom in Pune, what caught my immediate attention were the two Italian machines that were to be my date for the day. As my vision adjusted itself and I focused to admire the Benelli TNT 600 i and the TNT 899, something inside melted and I knew, today will be a good day. After 23 hard minutes of veiling my excitement and trying to look as professional as I could, Saeed (my colleague) and I were ready to take off from the showroom. Similar to the experience when you are about to utter those first words to a magnificent woman you’ve just come across, my palms were sweaty, my heart was pounding and my throat almost parched. However, a man’s got to do what a man’s got to do. So as I pushed the ignition button, what happened next, filled the atmosphere with glorious, eargasmic sounds, grabbing the attention of every living soul around us. The Italian Stallions managed to drown out all other noises around us, as my colleague and me were grinning at each other. 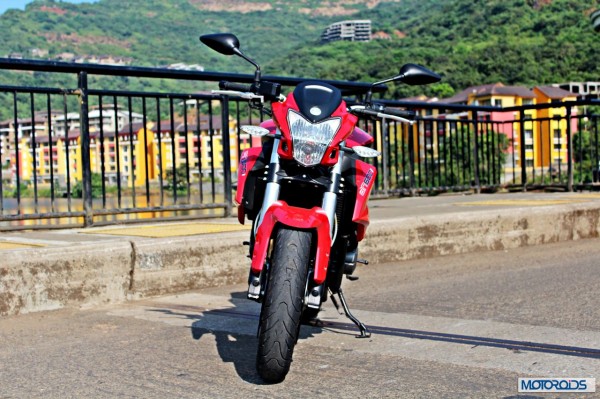 We puttered out of the showroom, realizing that it will be a long wait before we could test the real potential of these machines, thanks to the crawling Pune traffic, degraded further by a bottleneck created by some civil construction activities on the road. But that was particularly a good thing to happen as we could experience the motorcycles in clogged city environs which is bound to happen every now and then with a potential owner. While I was having an easy time on the TNT 600 i, I could see my colleague struggling a tad bit controlling the slightly more powerful TNT 899 and that is the major difference between these two motorcycles. The TNT 600 i is a versatile motorcycle which is at home in traffic and open roads alike, akin to an Italian supermodel, who is equally an alpha woman when it comes to handling mundane duties. Whereas, like a typical supermodel with a monumental body, the TNT 899 has a more edgy character and is only happy when the rev counter crosses 5000 rpm. 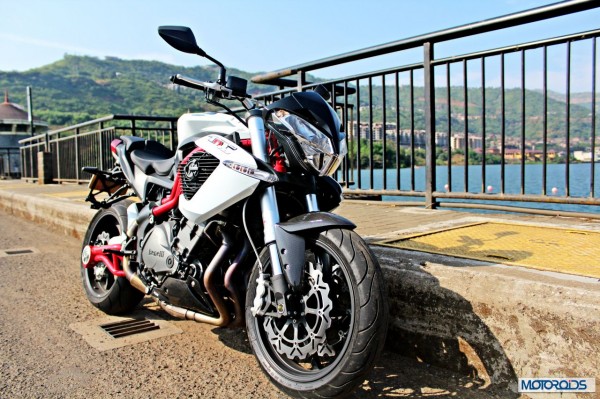 Luckily though, things started to fall in place. After spending nearly an hour in city traffic, open roads started to embrace the Benelli duo and this is where we could feel the sheer performance both the motorcycles had to offer. As the rpm needle of the TNT 600 i climbed up the rev range, the scenery began to blur and we started experiencing time warp. A glimpse at the speedometer made me realise that I was already propelling my body at three digit speeds, before better sense prevailed and I tapped the brakes before slapping myself flat into the boot of a slow moving car, or a railing, or a stray animal! The brutal manner in which the TNT 600 i accelerated made the so called “performance motorcycles” made in India (One of which I own) seem like a coal-powered locomotive in comparison to these Bullet trains. This on and off volatile rush continued for a little while before we had make a pit stop, this time to capture the Benellis through our lenses for the review. So after a brief break of about an hour for photography, we continued on our joyride to Lavasa to test the handling prowess of these motorcycles, but not before switching rides.

After spending time aboard the TNT 600 i for a good 25-30 kilometers, I got a chance to swing my leg over the more powerful yet surprisingly lightweight TNT 899 and take my word for it – the character was worlds apart from the TNT 600 i. I finally understood what my colleague was going through. The motorcycle craves for continuous revving, challenging you every moment to work up to its limits. And boy, what a feeling that was! One thing’s for sure, the TNT 899 is not for the faint hearted. It will either bring out the best in you or show you where you belong, as when the needle passes the 5000 rpm mark the motorcycle starts to get into its true character. It pulls like a missile while you hang on for dear life, trying to scare yourself. But hey, it’s a compliment! 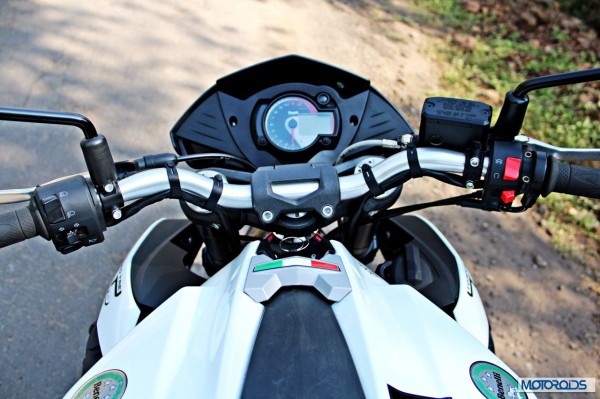 The enjoyment amplified several notches higher once the going got twisty. The thunderous sound of the Benelli duo resurrected everything it passed by, as people waved their hands towards the motorcycles. Mobile phones cameras started focusing on the red and white Italians, and even livestock, which generally wouldn’t give a damn even if a nuke was dropped next to them, raised their heads and gave us an approving look, maybe they even winked at us. The roads placed another challenge, especially for me on the TNT 899 as I had to make sure that I don’t exceed the required throttle input and get into a high side only to find myself at the bottom of the valley. But my fears were far left behind as I confidently leaned into every corner that I came across. Mind you, while my colleague was enjoying a solo ride on the TNT 600 i, I had to be more cautious as I had to take care of our young photographer on the pillion seat who, by the way, wasn’t much happy on the TNT 899 and complained about a sore back every once in a while. Yet, backed with exemplary Italian engineering, the extra weight did not bother the TNT 899 and I zoomed past the TNT 600 i only to see my colleague catching up in the rear view mirror till we reached the gates of Lavasa. 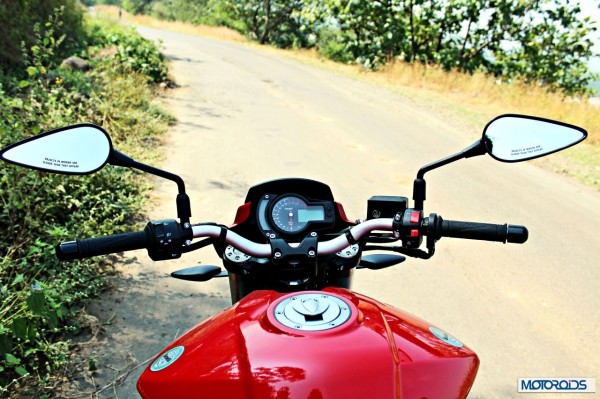 Once we got into the township, the more, let’s say, well-behaved audience tried breaking into a conversation with us, curious to know more about our Italian friends. And we happily explained some of the details while we sipped on some energy drinks by the lake.

Sadly though, the day was coming to an end and we had to begin our journey back to the city. But not before we could play erase and rewind. This time I again took over the more subtle TNT 600 i and although I enjoyed the power that the TNT 899 had to offer, I was happy to switch the motorcycles. Why? Well, the suspension on the TNT 899 was setup on the stiffer side to keep up with its hooligan nature, yet endow it with appreciable handling capabilities. The BN600i, on the other hand, had a better setting and the motorcycle took the bumpy sections of the roads with ease, not to mention the comfort it offers even at the bottom end of the rev range. 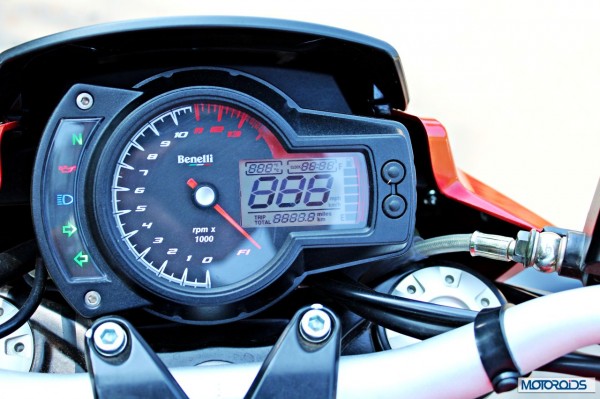 Both the motorcycles are equally fun while leaning into the corners. But where the TNT 899 feels more confident going into a corner, thanks to its wider rear tyre and lighter weight, it’s the TNT 600 i’s torque distribution that comes handy while getting out of one. Even the gear ratios on the TNT 600 i were more friendly, especially in the city. The TNT 899 is happy and singing when the revs are on the boil and unless that happens, you will end up down-shifting frequently.

As we entered the city, the traffic began to pile up again and I was glad to be riding the TNT 600 i. Amongst the two, the TNT 600 i was the machine which pulled the strings of my heart more as due to an inline four setup which emanates an aural symphony that is music to the ears against the TNT 899’s grunt and raw feel. My liking for even numbers further cementing the bias. I also enjoyed the attention that day, particular from PYTs, who would drop their earplugs and lower their sunglasses in admiration. 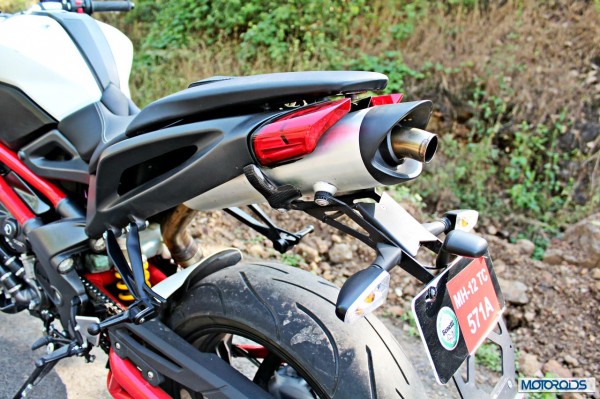 So here are the set of different characteristics and similarities that I observed after a long day of riding. Ergonomics on both the motorcycles are more or less similar, where the riding stance is neither too aggressive nor too straight forward. The rider’s triangle is a near perfect setup for everyday riding and long weekend hauls but it’s the seats that makes a difference. The TNT 899 comes with a stiffer and compact seating setup for rider and pillion both, which gets a little uncomfortable after a while, the stiffer suspension setup adding to the woes. The TNT 600 i on the other hand is a more comfortable ride, even for the pillion, as it receives a pair of grab bars and with a relatively softer suspension setup, the joy of riding is extended to the person accompanying you on the ride. 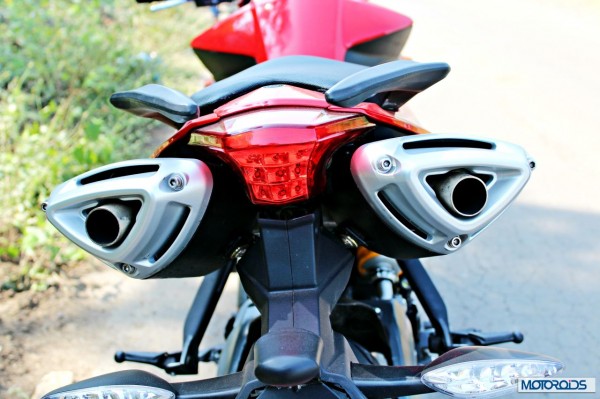 Summing it up. both the motorcycles are designed for a specific task and do a relatively good job in their respective roles. The Benelli TNT 600 i is assigned for city commutes with an occasional weekend trip. The TNT 899 is mainly built for adrenaline filled weekends rather than city hauls. Collectively, both these machines gave me a hands on experience of old school, hairy chested motorcycling where your instincts were smarter than the electronics found in the current crop of motorcycles, when skills mattered. Yes, the motorcycles do not receive ABS or other riding assistance even as an option. What it dose give you as an option is an opportunity to become a better rider, a raw motorcycling experience that not many machines can offer today.

We also had an friendly chat with DSK Benelli India’s Service Head Joseph Augustus who gave us a gist of what this oldest Italian motorcycle brand has in mind for the Indian audience. Click here to know the exclusive details that we found out from him.