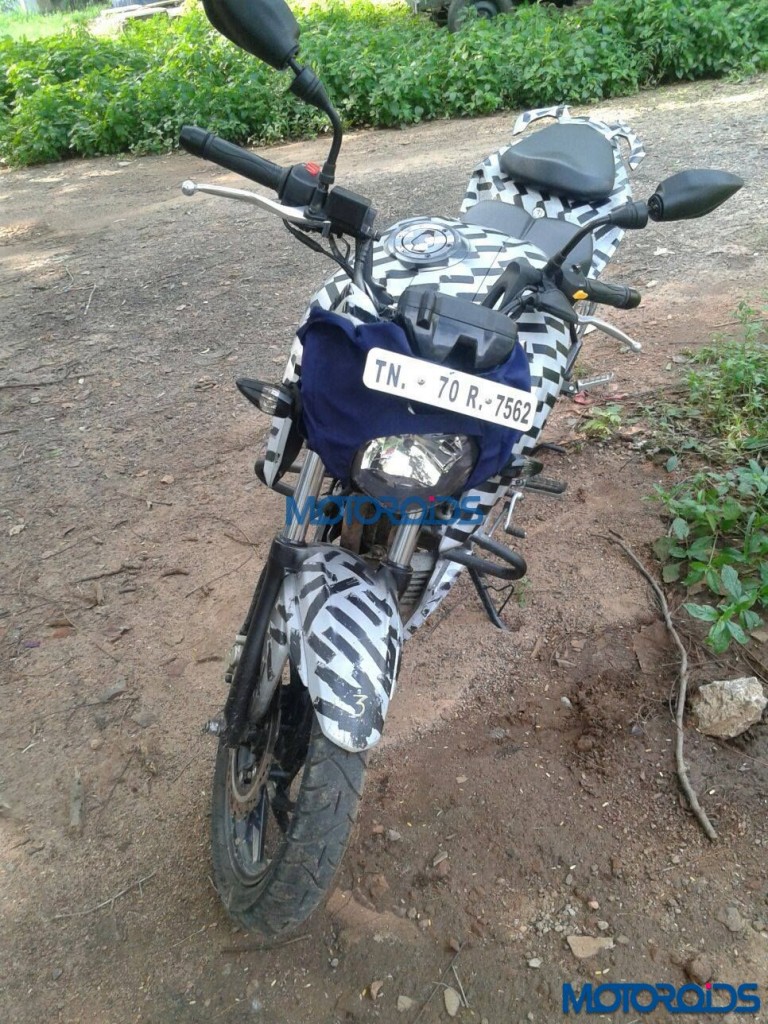 While not exactly a ground breaking offering in the current context, the new TVS Apache is a highly anticipated product for those looking to buy a sporty motorcycle in the Rs 1-lakh segment. With a 200cc single cylinder engine, the Apache might not be the most enticing thing on wheels out there, but it sure has a great chance of selling in good numbers. Read our opinion on why the new 200cc Apache may make a lot of sense (if executed and priced well) here.

While we have brought to you images and details of this motyorcycle in the past, our reader, who wishes to remain anonymous, has shared with us these images which reveal the bike’s instrument cluster for the first time ever.

Back in August 2015, Venu Srinivasan, chairman, TVS Motors hinted the arrival of the new, updated Apache, along with two more products, in a matter of six months. Inching closer to its launch date, the new Apache has been caught several times performing its test runs. But this new set of spy images reveal finer details about this upcoming TVS rumoured to carry a 200cc power plant, including a clear view of the instrument cluster.

OpEd: Here’s why the TVS Apache 200 can be a real winner 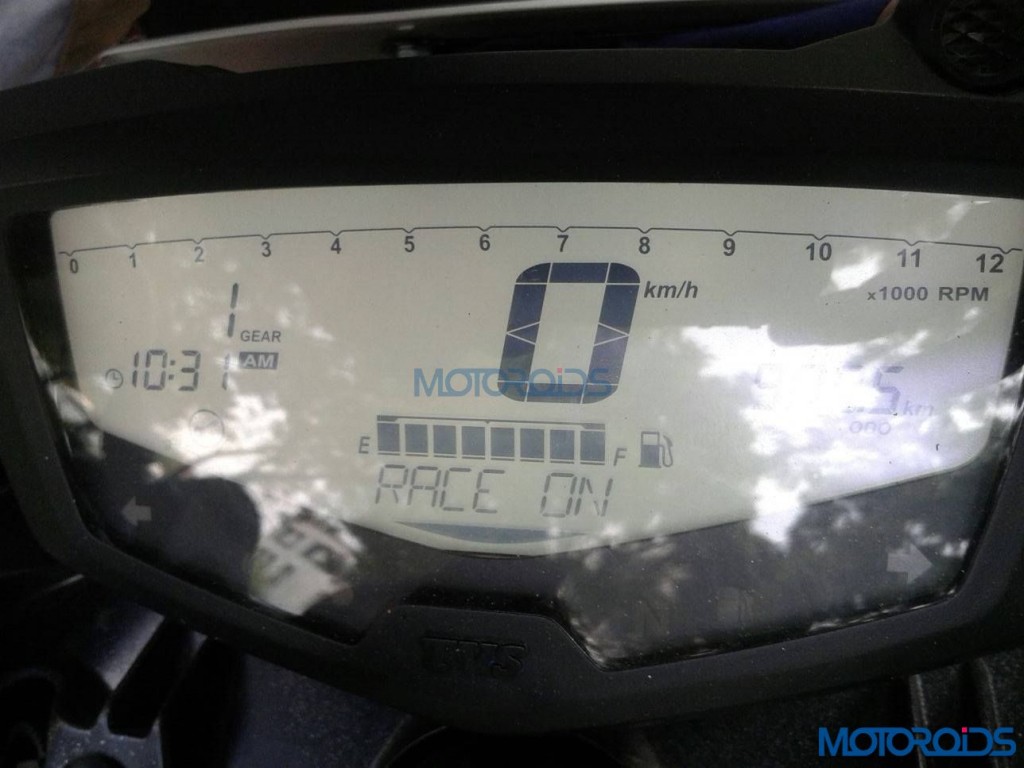 The compact and completely digital instrument cluster will hold a tachometer on the topmost position of the panel. There doesn’t seem to any markings for redline here, though there is  a good possibility that the motorcycle may rev till 10,500 RPM. A digital clock occupies the leftmost corner of the instrument cluster, accompanied by a gear position indicator above and an service reminder icon below. The speedometer sits at the centre of display with a fuel indicator below it. A “Race On” message was seen below the fuel gauge but we really cannot figure out what function would bring that notification on the digital console. The “Race On” text might just be a message to indicate the sporty character of the motorcycle or it might be an inbuilt function, similar to what we saw on the Mahindra Mojo, which records the 0-60 (or possibly 0-100 km/h in this case) sprint timing.

Odometer (with a little over 900 km of reading) and trip meters dwell in the extreme right corner of the digital display. The tell-tale indicators are assembled right below the digital console and we could spot the ABS icon on the left part of the instrument panel, right next to the high beam indicator. The test mule in these spy images did not have the ABS ring on the disc brake which indicates that the safety net will be optional, not to mention, at a slightly higher price.

The Instrument cluster is bordered by black plastic cladding with a TVS logo while a gear-shift light, with a BMW G 310 R style pattern, occupies the right top of the panel. 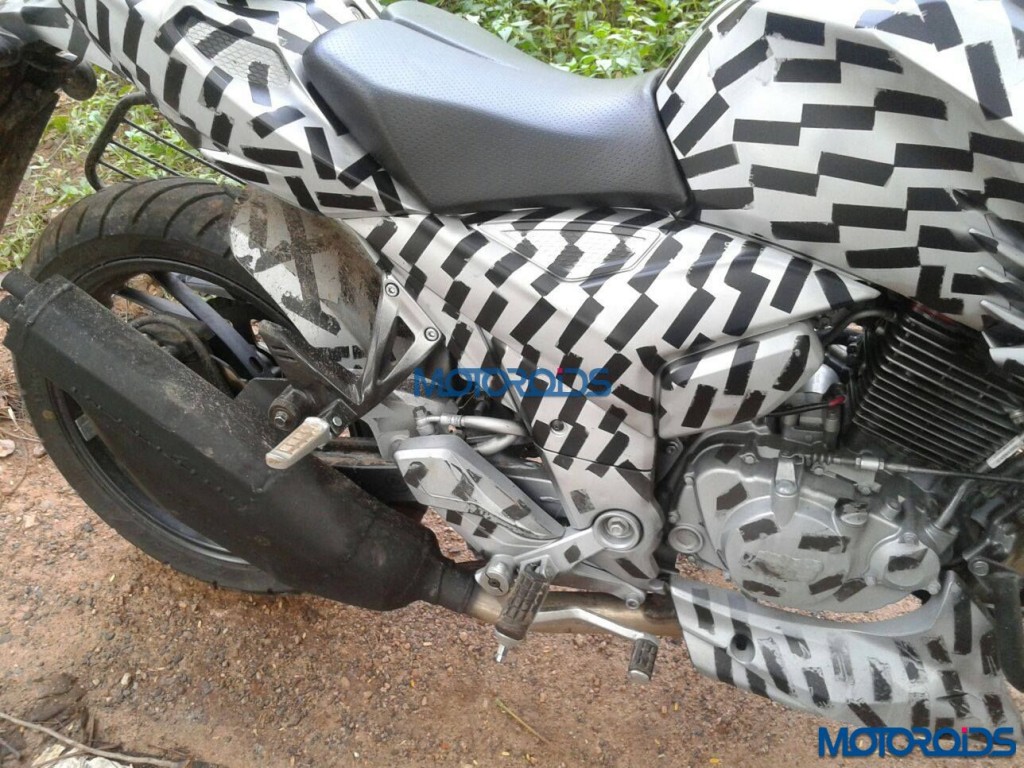 In terms of design, the TVS Apache will carry forward some of the trademark bits that were seen on the current model along with some additions from the TVS Draken concept. A petal disc brake setup can be seen at the front wheel suspended on a conventional telescopic setup, unlike an up-side down unit on the Draken concept. One thing that we would have liked to see is an off-set monoshock rear suspension like the Draken concept but it seems like TVS plans to keep the production costs low by employing a conventional unit.

The front fairing, similar to the previously spied test mules, was practically non-existent, and the new motorcycle will be a true-blue streetfighter in terms of appearance. Moreover, the motorcycle will get conventional brake lines instead of steel braided units but that should not be a major concern, especially for the ABS equipped model. Finally, we could see the trademark TVS handlebar grips on the test mule, which are also equipped on our TVS Star City Plus long termer. The clip-on handlebar itself is high raised which is likely to lend a comfortable and city commuting friendly ergonomics to the new Apache. 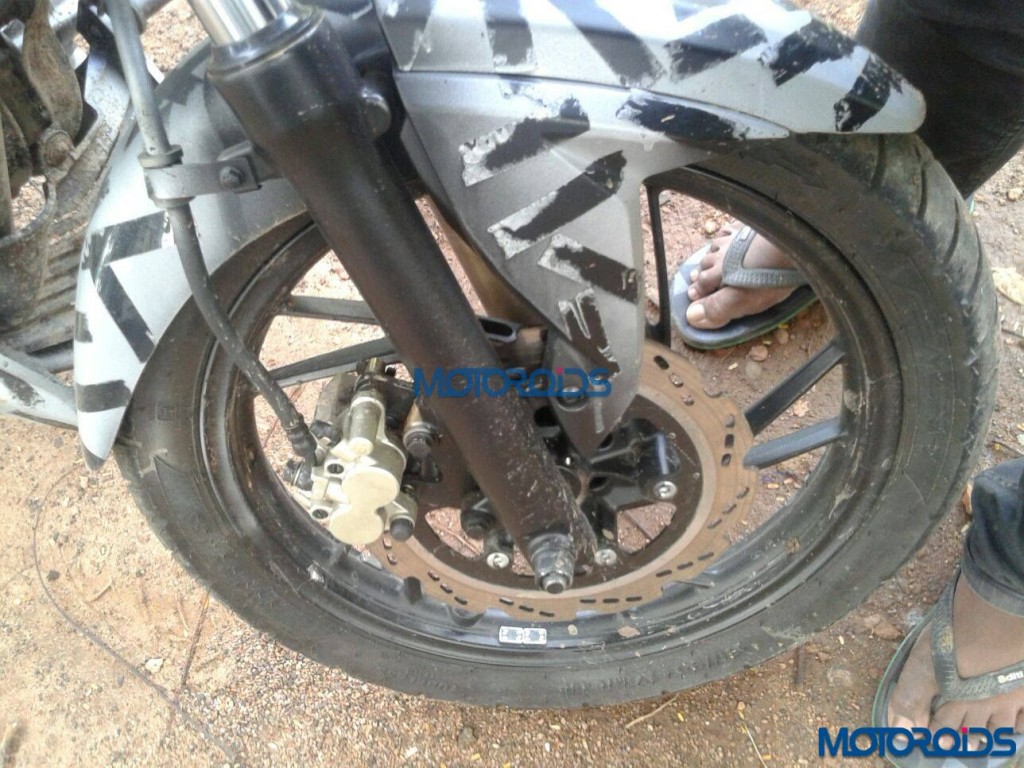 The tank design reminds us of the Draken concept with extended shrouds giving a muscular look to the overall appearance. Another noticeable element is the offset, flush-type fuel filler cap, a design aspect that was seen on the Draken concept. The rider seat too is identical to the Draken with its split rear end and comes with a dotted pattern for grip. Right behind the rider seat is the keyhole to open and access the under seat storage. The pillion seat will be taller than any other TVS product and will somewhat resemble the Yamaha YZF-R15 format. The W (err… or M) shaped pillion grab bar is itself an all new design element and looks pretty cool.

Here are the key details of the new TVS Apache 200 at a glance:

That’s a lot of detail for just a few spy shots. But we’re sure there’s a lot more to the new motorcycle than a new shape. Expect a power output in the region of 22 bhp from the new engine, though we cannot be sure about this.

Enticing enough for you to procrastinate your buy? Do share your thoughts about the design and other features with us.