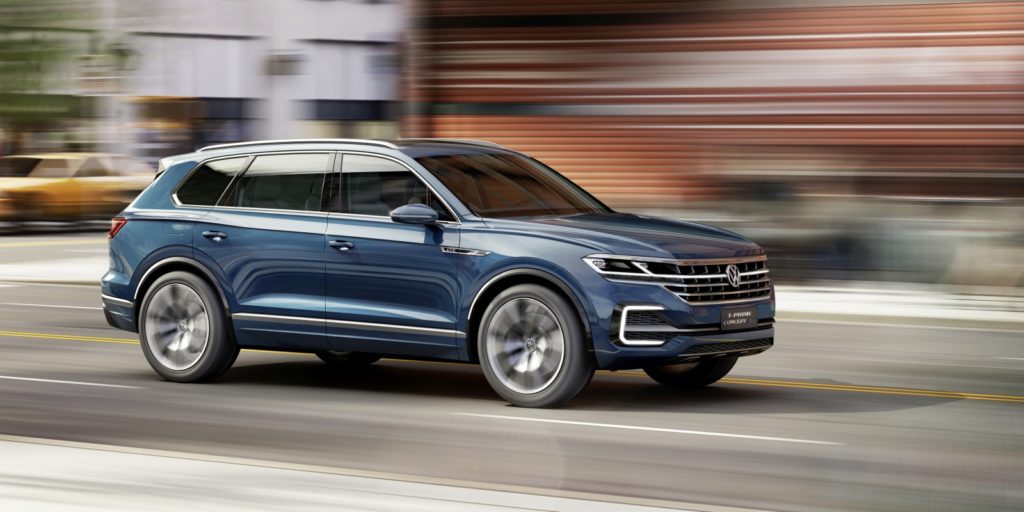 The 2016 Beijing Motor Show has started off with a bang with new cars and bikes coming out of the wraps. One of the first concepts that have debuted at the event is the Volkswagen T-Prime Concept GTE. We brought you a detailed story about the concept when it was teased a few days back. The concept previews Volkswagen’s futuristic approach towards their upcoming premium SUV segment. The high-tech full size SUV concept packs a plug-in hybrid powertrain and all-wheel drive. The concept is claimed to have combined the best of many segments – the comfort and space of a saloon, the traction of an off-road vehicle, the agility of a sport sedan and the efficiency of a compact car. 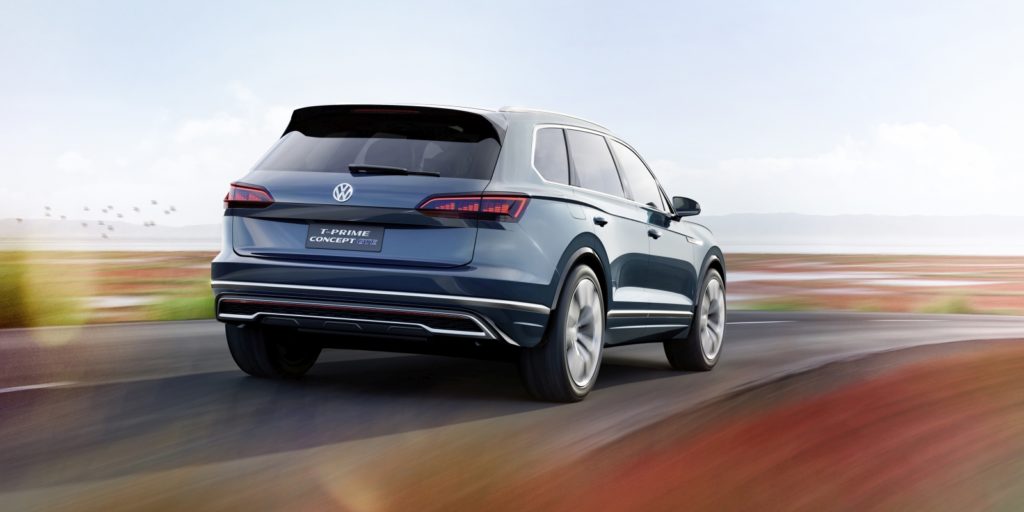 On the visual front the Volkswagen T-Prime Concept GTE follows the maker’s SUV design philosophy that has been added with futuristic touches. The front fascia comprises of the a large chrome radiator grille that extends across the entire width of the front end including the LED headlight units. The front bumper gets an split air dam that connects the large air scoops featuring ‘C’ shape LED DRLs that are typical of all Volkswagen plug-in hybrid and electric models. The concept is based on the Volkswagen’s modular longitudinal platform (MLB). The wheel arches are outlined by a strip in a darker shade. 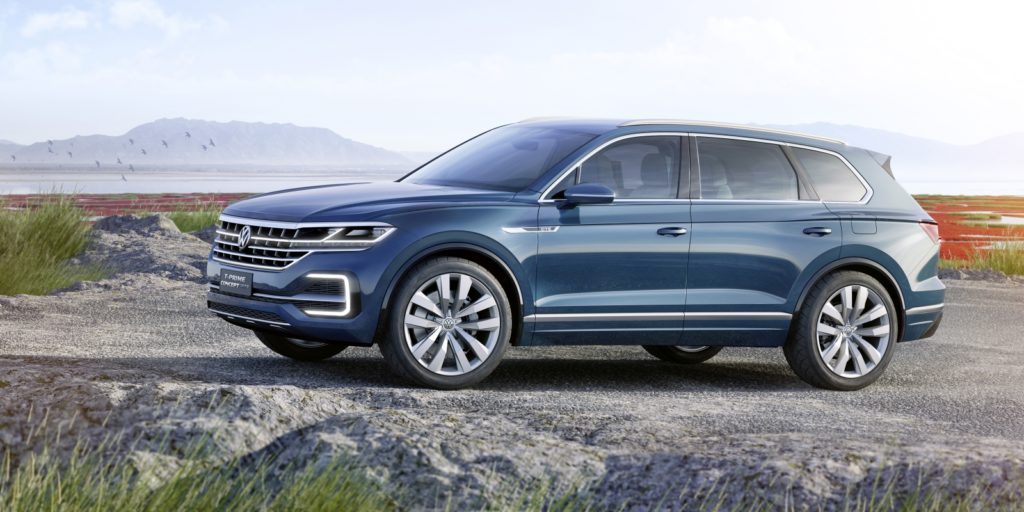 The full size SUV features character lines with one of the top creases emanating from the hood and ending after the C pillar. Another character line begins just above the front wheel arch and extends through the doors and merges in the taillight cluster. The doors and rear bumper are underlined by a chrome strip. The sloping roof descends towards the rear and protrudes as a spoiler. The T-Prime concept drives on large 22-inch alloy wheels and size 285/40 tires. The rear section comprises of minimalistic drama with small tailgate sharing illumination units with the corner section. Interestingly the tail lamp units feature equalizer style lighting. 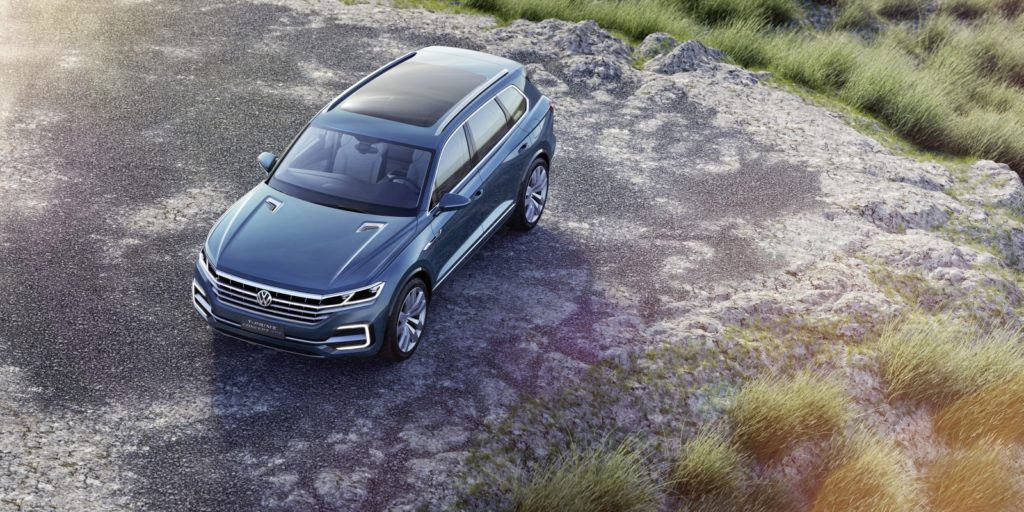 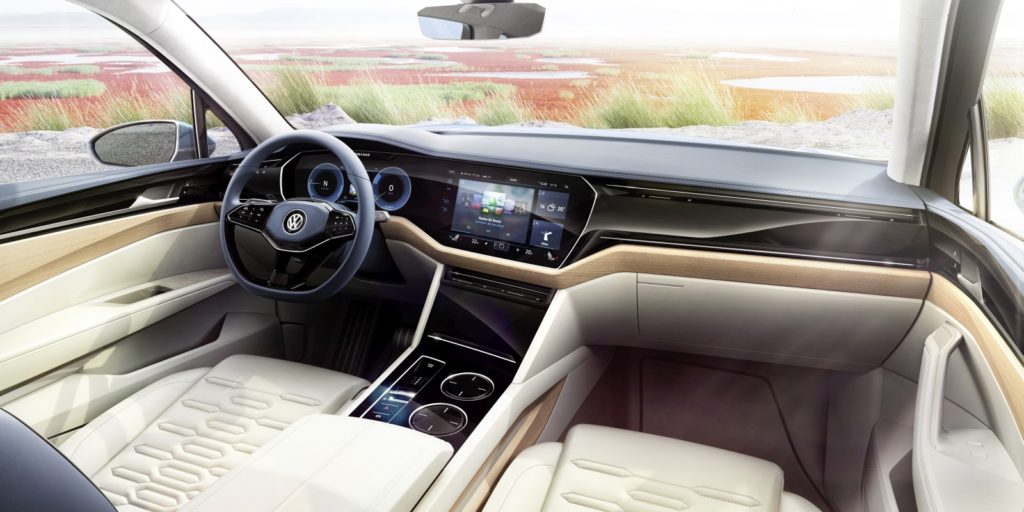 The contrast is provided by the warm color hues of the wood accents that are present under the dashboard and doors, prop shaft tunnel trim and other leather surfaces like seats, trims beneath wood accents. The interior not only features a clean and elegant design but also provides digitally assisted convenience. With the exception of the steering wheel stalks, all controls are implemented as touch-sensitive surfaces with white backlighting. The new Active Info Display and the infotainment display located under a continuous glass surface, are aligned towards the driver. The new curve glass treatment in the cockpit reflects Volkswagen’s design approach for the cockpit design of their future models. 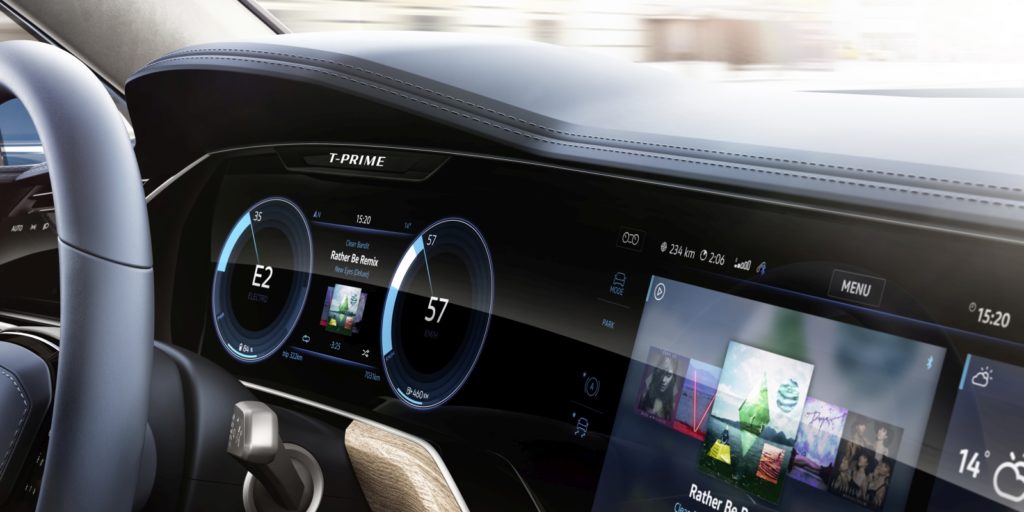 The colour and materials of the Volkswagen T-Prime Concept GTE pays tribute to Chinese lifestyle and are based on water, earth, wood, metal, and fire. The designers say that water, the all-dissolving and flowing element is reflected in the petrol-blue body paint color ‘Beihai Blue’ (inspired by a beach on the South China Sea). Xirallic—a cyan-colored substance with crystal effect pigments—makes the paint sparkle when viewed from above; meanwhile, a deep sea blue is seen on the edges. The instrument panel and the back sides of the seats carry the exterior color scheme over into the interior with the turquoise blue leather color ‘Ipanema Blue’. 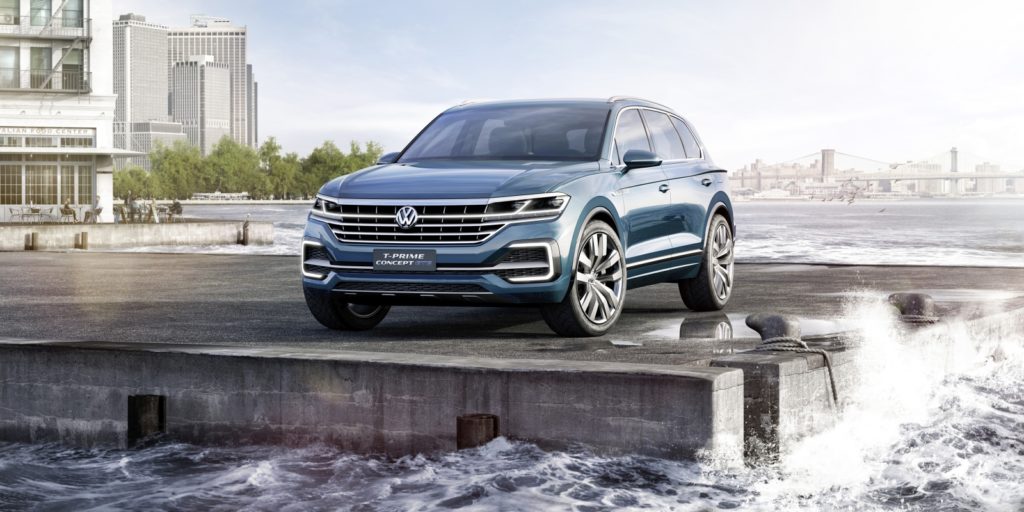 The concept draws power from a combination of an electric motor, turbocharged gas engine, and battery; this battery can be charged externally or during the drive as well. The 2.0-liter four-cylinder TSI engine can make 244 Bhp of power and 370Nm of torque while the electric motor develops a power of 132 Bhp and a peak torque of 349Nm. In boosted GTE mode the combined torque goes up to 699Nm. The T-Prime Concept GTE is equipped with 4Motion permanent all-wheel drive, which distributes power to the front and rear wheels via 8-speed automatic gearbox. The transmission has a new ‘by wire’ gear shift control on the console. This is implemented as a glass scroll wheel with a chrome surround that is fitted with sensors which enable intuitive operation of functions. 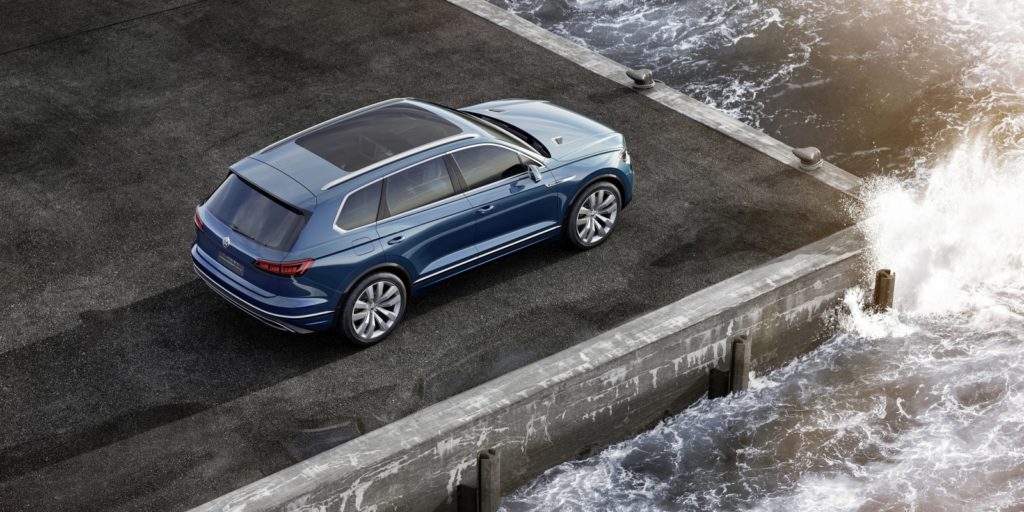 The T-Prime can be driven in three different drive modes: E-Mode, Hybrid, and GTE. The system is designed so that the drive utilizes battery energy first, and so it starts off in E-Mode. While driving in E-Mode, the driver can intentionally activate the TSI and therefore the Hybrid mode by pressing the accelerator pedal beyond a defined pressure point. The driver can return to the zero-emission E-Mode via touchscreen at any time (provided that the battery still has sufficient charge); in this case, the all-wheel drive is also active. The GTE mode can also be activated via touchscreen.

The concept has been revealed at the ongoing auto event in China and we await to see what premium SUVs are created out of it. It sure promises to introduce a new futuristic approach towards the design language of Volkswagen’s future SUV models. Following are the host of images of the Volkswagen T-Prime Concept GTE.