Home Features RE Himalayan : CEO Siddharth Lal shares his thoughts on the concept, development and testing of the motorcycle 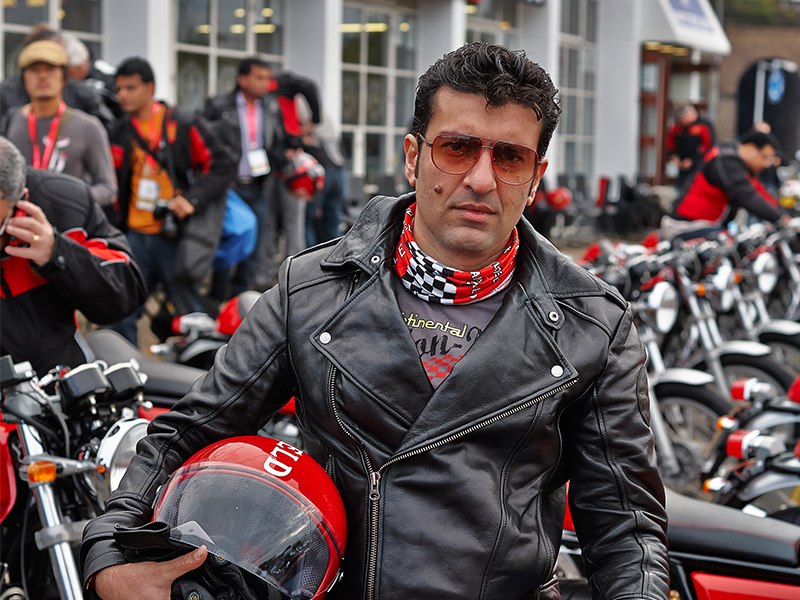 The launch of the RE Himalayan is just around the corner. The latest addition to the Royal Enfield family has sent the brand’s fans in a tizzy owing to the new model’s unique positioning and character. The world’s oldest surviving motorcycle maker has been feeding us in slowly with increasingly revealing information about the motorcycle to build up the excitement.

After revealing the testing videos with CS Santosh, and a few other juicy bits about the promising new machine, the bike maker is underlining the passion that has gone behind the making of the new motorcycle by sharing a personal log of the motorcycle’s development by the company CEO Siddharth Lal. In an emotional write up, the man at the helm talks about what makes the Himalayan so special, the philosophy behind and the journey embarked for the execution of the concept. He shares his experiences while riding with the motorcycle and chronicles the development of the machine in a very personal way. It’s a great read, and we’ll encourage our readers to go through the text. It really makes you understand the new adventure motorcycle better and leaves you with a warm, mellow feeling. Enjoy!

The idea of the Royal Enfield Himalayan has been 60 years in the making. With an unbroken heritage of 115 years, Royal Enfield has been in India since 1955. The Bullet was first brought to India to be used by the Indian Army in the Himalayas, and its success in these tough terrains is the foundation of Royal Enfield’s enduring relationship with adventurers in India. 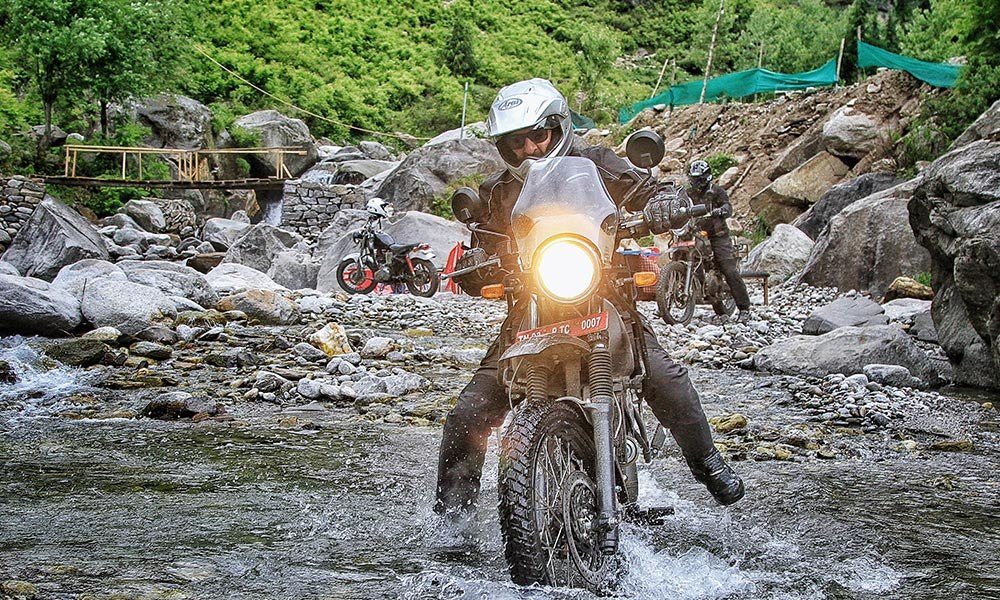 I have been riding in the Himalayas for over twenty years now. It is the most gorgeous landscape – with miles of barren stretches of land, snow, daunting mountains and passes. The light air and the densely bejeweled night sky connects me to the universe like nothing else does. My first long ride in the Himalayas was in 2010 when I was riding with my friends, and we got stuck in a small village for many days due to the flash floods that wrecked the Leh region. While we could not complete the trip, our single biggest insight was that the best motorcycle for the Himalayas is not one that tries to dominate its landscape, but one that is able to go with its flow.

Large adventure tourers that currently define this category, do not fare well in the Himalayas as they are very heavy, extremely complicated, and not really designed for this environment. They guzzle high octane fuel in a region where there are few petrol stations and the fuel is often adulterated; they come to a stop if there is an issue with their electronics – and unlike the European conditions that they are built for – there is no RAC or AA breakdown service in sight; if the motorcycle falls in deep slush, it takes three people to lift it. And anyways, most people who aren’t 6 feet tall find these motorcycles very intimidating – so that rules out 99% of Indians! 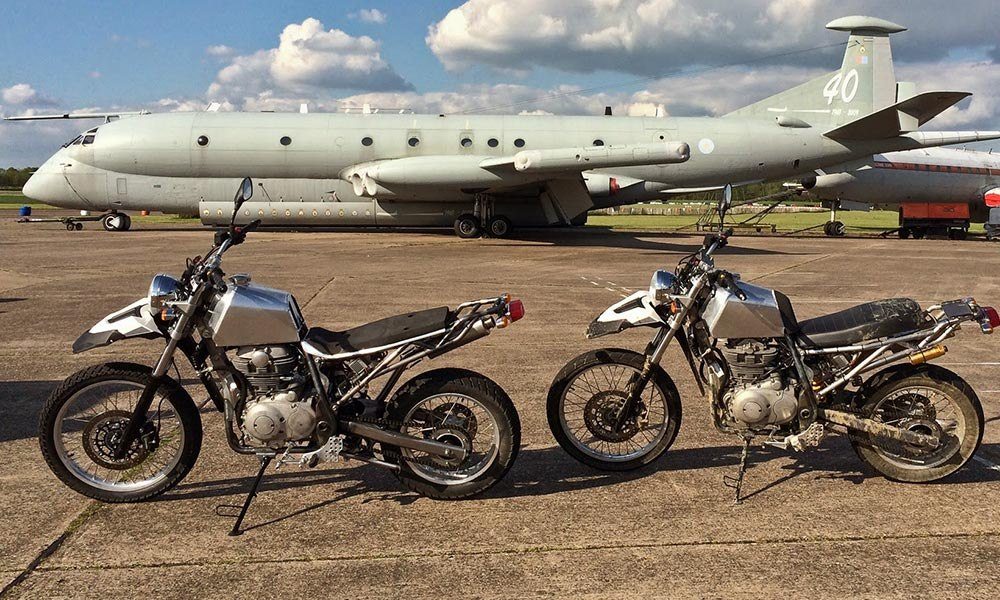 Given our collective learning and experiences of riding in the Himalayas, the idea of a purpose-built Royal Enfield for the region has been brewing in our heads for years. We started with a clean sheet of paper to build a motorcycle that was as comfortable fording a rocky river as it was to crunch hundreds of highway miles; substantial enough to hold its line in high cross winds, and to carry a pillion and lots of luggage, but light enough to pick it up when it falls; simple enough to mend a broken part yourself (as a result of that previous fall!) or to start even if the battery is dead (seriously, you can push start it and put on your headlamp even if the battery is missing!). It should be accessible for an average Indian to ride, yet have enough room for excellent ground clearance and long suspension travel; it should have good range, lots of available torque, be economical to run and own, and lots of fun to ride and to live with! Easy, isn’t it? 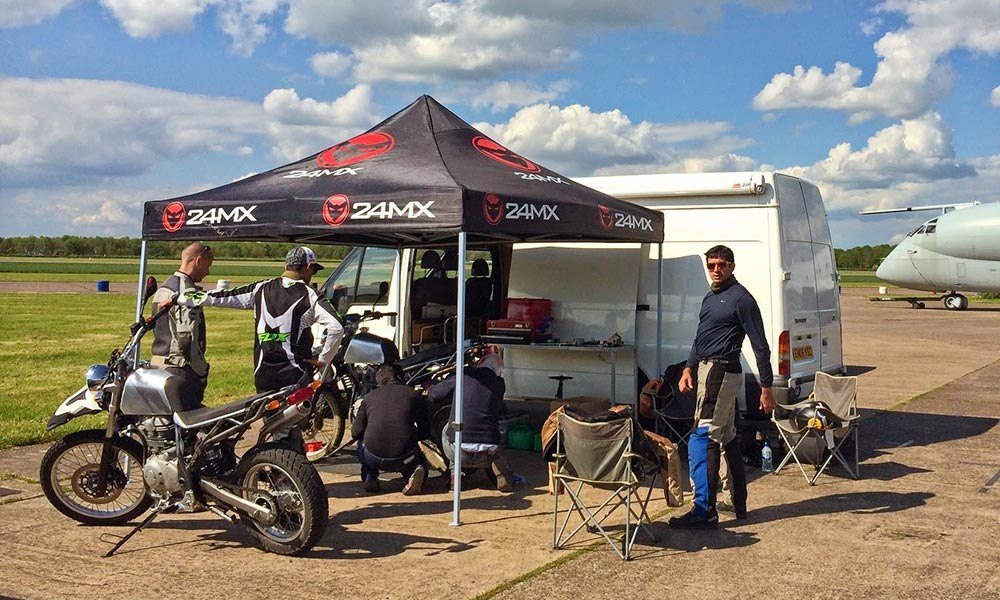 During the exciting and agonizing years of designing the Himalayan, I have had the opportunity to test the motorcycle at various points in its development. While the testing team included our in-house experts and professional motorcyclists such as CS Santosh, I wanted to be able to add value as an advanced customer and custodian of the Royal Enfield brand.

I rode the prototype extensively in the summer of 2014 at the Bruntingthorpe airfield and surrounding off-road tracks in the UK. While riding onto a steep muddy hill and going down its slope, the motorcycle gave me tremendous confidence with its gradability, high ground clearance and beefy suspension.

In line with Royal Enfield’s traditional long stroke engine characteristics, the all new engine delivers high torque and usable power at lower RPMs. This makes for smooth riding in higher gears at lower speeds, making it easy to climb hills, or to maneuver through traffic. Fewer moving parts with modern materials and aggregates means that the engine is low maintenance and very efficient, and can go 10,000 kilometers between oil change. 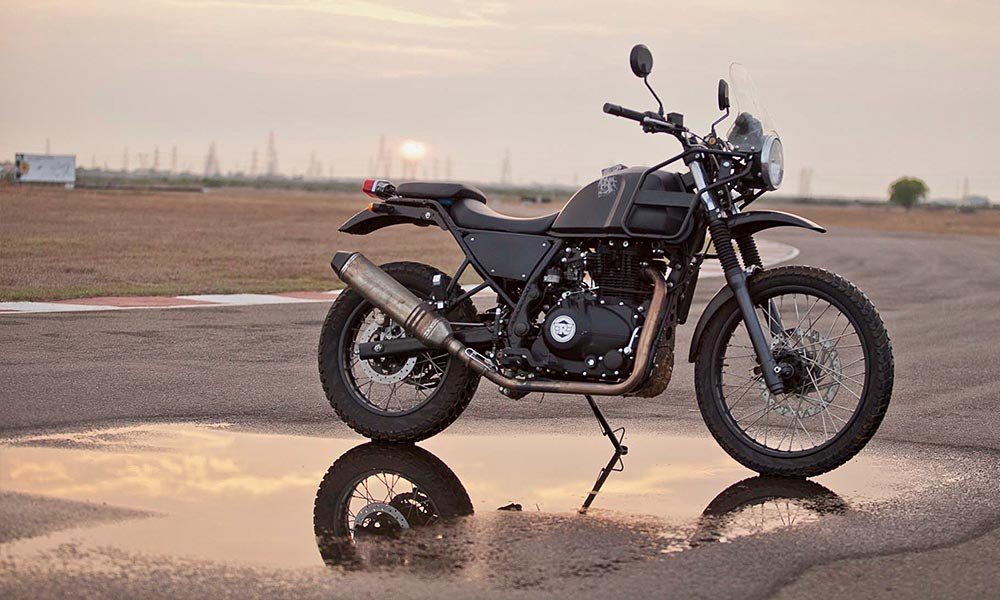 In addition to great off-road abilities, we have designed the Himalayan to have impeccable on-road manners as well. As I was banking on the wet corners on the Chennai race track in early 2015, the Himalayan stuck to the ground and responded exactly as I expected it to, giving me the confidence to push the motorcycle even harder while the rain was coming down relentlessly.

Stripped of all non essential parts to keep it light and agile, the Himalayan is handsome in a naked and spartan way, as it exudes its purpose of adventure and exploration via every part and as a whole.

To truly test the Himalayan in its natural habitat, we took a few prototype motorcycles with some of my friends, family and colleagues for a week in the Himalayas in the summer of 2015.

Equipped with suitable tyres for off-road and on-road performance, the Himalayan has a 21-inch front wheel, high ground clearance and long suspension travel that helped us tremendously in traversing rocky river beds and craters on the road. 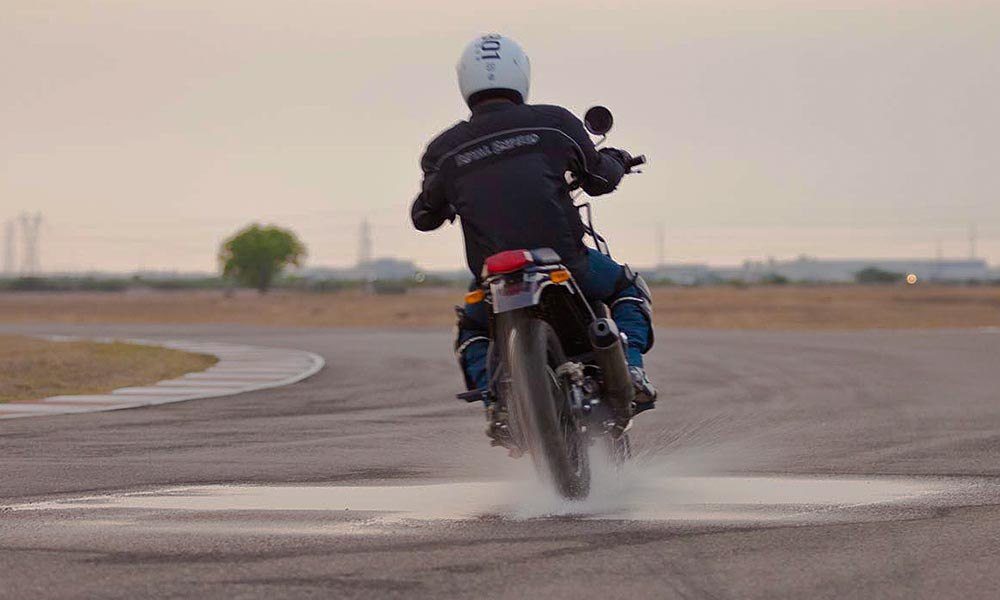 Luggage has been designed integrally into the Himalayan, with hard and soft side pannier options, a rear carrier and innovative front jerry can mounts for extra fuel and water – which can be a life-saver in remote areas.

An optimal seat height combined with ergonomic handlebar and footpegs position make for a comfortable upright riding posture, while the windscreen protects the rider from the elements. The low centralised mass of the engine and a slim long range petrol tank (15 litres) sculpted with knee recesses, allow for better stability and handling even while standing on the foot pegs while riding demanding mountain trails.

Most recently, in January this year I took out the production ready Himalayan for a long 800 kilometers ride from Goa to Hampi and then to Bangalore. I rode largely on smaller back roads, and took the motorcycle on forest and off-road trails as well. I was riding 12 hours a day for two days and I realized that (despite my age!) I did not feel tired on the Himalayan. 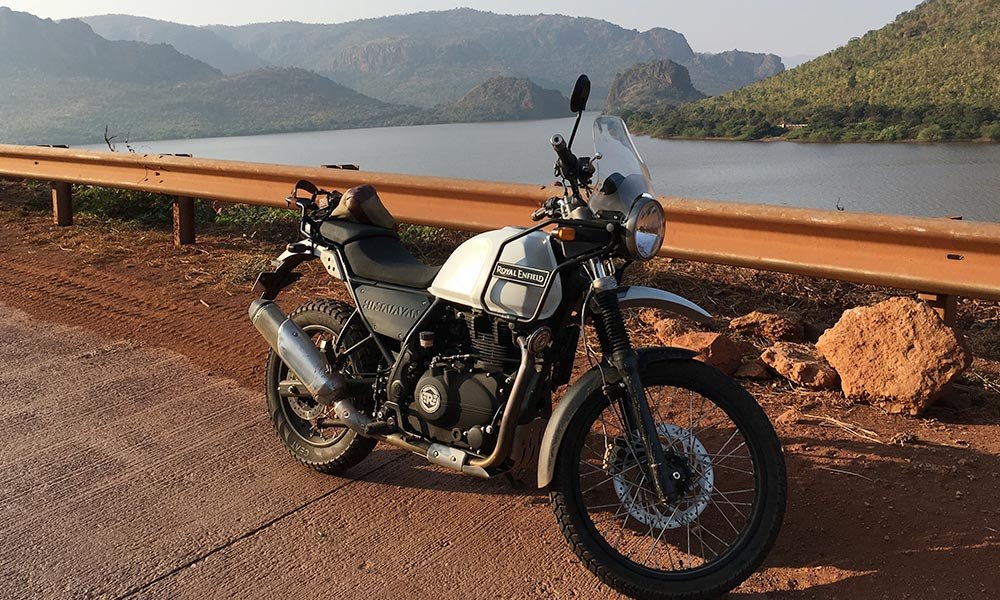 On the highways, I felt like I could ride forever at the sweet-spot of 80-110 kilometers an hour; however, it wasn’t a placid ride and made me feel alive.

While the Himalayan is purpose built, it isn’t extreme, and it has been designed to be your only motorcycle. You can go cross-country on any type of terrain for weeks on end, and you can carry a pillion and ample luggage as well as spare fuel and water. Its flat torque curve and accessible seat height and long suspension travel mean that it’s a wonderful machine for potholed urban jungles as well!

But more than just a sum of its parts, for me the many times that I rode the Himalayan, I got into a rhythm and zone where I forget about the motorcycle itself as it became an extension of me. And reaching that point of harmony between man, machine and terrain is what gets us onto the saddle in the first place, doesn’t it? 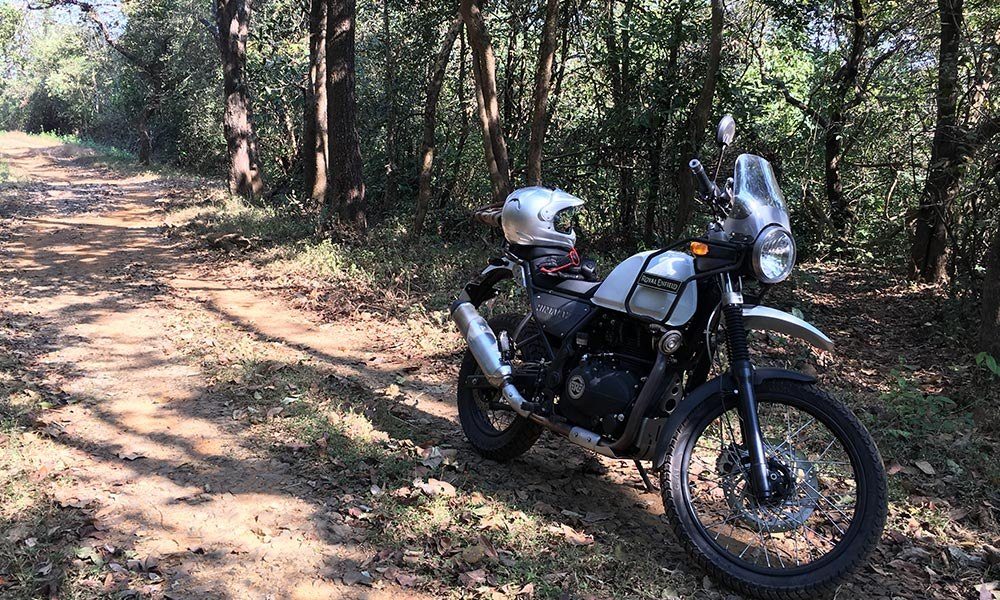 The Himalayan is the start of a new and very important chapter for Royal Enfield, and I believe for all those who long for a simple and capable go-anywhere motorcycle that enjoys adventure as much as you.