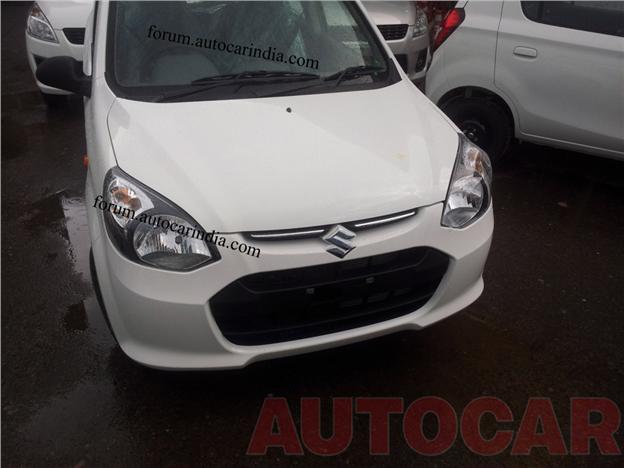 The new car, which has been codenamed as YE3 by the manufacturer, will be called as Alto 800. The car is slated for a pre-diwali season launch. The company’s bread and butter model Alto has been gradually seeing a depriciation in demand and the manufacturer sold only 308,288 units during the past financial year, a dip of 11% as compared to sales in the year before. Maruti will position this car at a price that will  be slightly below the Alto and rumours are doing rounds that the Alto 800 will come with a price tag of INR 2 lakhs! Expect stellar fuel efficiencey among easy maintenance.

One look at the car and you are going to have a tough time deciding the ‘inspiration’ for the exterior styling. The car carries a fair bit of details from the i10, A-Star, Alto, Figo and this list threatens to become longer everytime we look at the car.

Starting with the front, we were quick to notice the ‘Figo-ish’ front grill with a huge air dam at the bottom. The resemblance to Figo gets further amplified due to the large-ish front bumper. The similarity is so strong, that we were almost fooled for a second into believing this car to be an evolution of the high selling Ford hatchback. Moving further, the windscreen and the angle at which the A pillars are situated, bring the memories of the Alto. The strong creases on the hood bring some visual relief and help the car not look bland.

In side profile, the wide B pillar is fast to catch attention. Again, the pillar seems to be carried from the AStar. The rear door is very much like that on the i20 and the door handles have been taken from the vast Maruti parts bin. Again, a strong crease just below the beltline and bold wheel arches prevent the car from looking too bland and ordinary.

The rear is where similarity to existing cars can be traced the least. Do not get me wrong, the rear surely has hints of the Korean cars but manages to have quite an air of being genuine to it. The number plate housing is in the rear bumper and it will be interesting to see how well the guys at MSIL manage to deal with the space left on the hatch.

Will this car replace Alto?

Word is that the YE3 will not replace the Alto in totality and both F8 and the K10 will continue to sell. There are good chances that the will be a replacement for the 800 ONLY and the Alto F8 shall continue being in production.

Not much is known about the technical specifications of this car but the YE3 should be powered by a reworked F8D motor that does duty on the Alto F8. However, we wish that Maruti downsizes the K10 to 800cc and employs it in this car. But then, we know not if MSIL has thought about it.