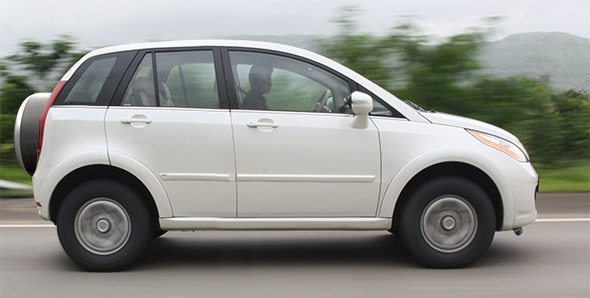 It’s raining Compact UVs !! Almost every major car maker is coming up with its version of Compact MPV/Crossover. The latest to join this band is the very popular Indian manufacturer Tata Motors. Tata is developing two compact UVs to take on the likes of Maruti Suzuki and Mahindra.

Now, the Tata Aria has to be one of the most modern and well sorted cars to have ever come from the Indian auto giant’s stable. The fact that it could not really capture the imagination of the car buying lot is a different story.

Unfazed by the Aria’s poor showing at the sales charts, Tata Motors has started working on a ‘minimized Aria’ to take on the likes of hot selling Maruti Suzuki Ertiga and Mahindra Quanto. It has also emerged that the current Aria’s hydro-formed chassis might be ditched in favour of the old Safari’s platform. This is due to the fact that modifying the Aria’s platform to underpin the Mini Aria would translate to huge development costs and hence, higher selling price.

Powering the Tata mini Aria might be either a Fiat’s 1.3 MultiJet VGT or a downsized version of the 2.2 litre oil burner that powers the Aria and Safari. It may be noted that Mahindra has used a twin turbo set up from the Quanto’s motor and we won’t be too surprised if Tata Motors comes up with an apt answer to Mahindra’s new modus operandi.

Overdrive further says that a sub-four metre Sumo is also in pipeline. The design of the mini Sumo is a joint work of Tata European and Indian technical centres.

What we really wish for is to see the Mini Aria with the hydro-formed chassis of its bigger brother.