Has Yamaha has gotten the Fazer right on the second attempt? Mihir Gadre ponders over the answer… 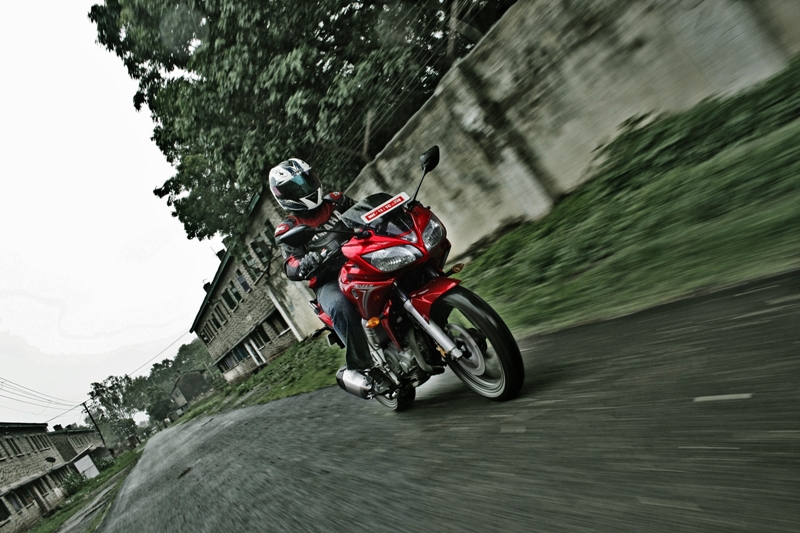 It is a proven fact that Indian bikers are extremely fond of fairings. From ancient bullets to humble HH CD100s there has never been a bike on which people haven’t tried to slap on a home made fairing. Maybe it has something to do with the fact that for decades, the Indian buyer was deprived of this simple piece of plastic and now they just can’t do without one. Today, the fairing fetish has gone so far there is hardly any bike left in the market which is available exclusively in a non-faired version!

Personally, I am not a big fan of fairings, firstly because at speeds that our bikes are capable of, the fairing mostly serves only cosmetic purposes rather than aerodynamic ones. Secondly, even the smallest of the fairings hamper visibility and compromise my pothole dodging capabilities. Thirdly, they increase the weight (6kgs in case of the Fazer) and also the girth of the bike requiring you to be extra cautious while parking into that tiny slot, which was just vacated by a Splendor. But Yamaha has learned its lesson the hard way.  In India you have to give the buyer what he wants and not what you think is good for him. I am sure that by now every Yamaha showroom in the country must be irritated out of their minds answering enquiries from FZ and FZ-S owners whether the Fazer’s fairing can be bolted on to their bike. 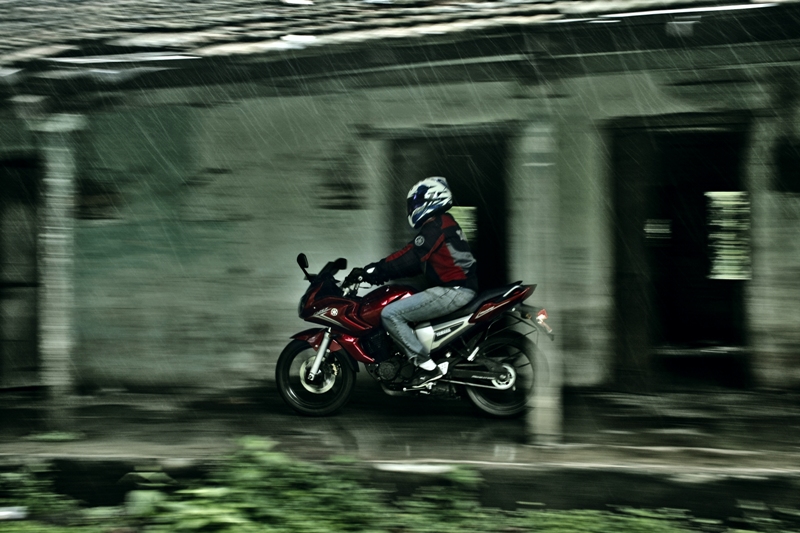 Looks are totally a personal thing, so for me the new fairing works wonders front-on but loses the plot when viewed side-on. That’s probably because it has wavy, organic lines while the rest of the bike has a lithe muscular look. The quality of the fairing job is top notch with no excessive flex in any of its panels and why not? Nothing less is expected of Yamaha. Yamaha engineers have played around with the Fazer’s ergonomics making slight changes to the seating position and have succeeded in taking some of the weight off the rider’s palms compared to the FZ; however, the problem hasn’t been remedied completely hampering its much advertised touring credentials. It has a plastic panels over the tank, which means that magnetic tank bags are out of the question and doesn’t have any bungee hooks, either.The new fairing mounted mirrors have a huge wingspan of close to 3 feet from one pointed edge to another and have a tendency to poke adjoining riders (specially at traffic lights) in the wrong places, which can be a bit of an issue.

The engine is lifted straight out of the FZ. The bike pulls like a dream from low revs accompanied by a satisfying growl from the mid-ship exhaust. And the gearbox is as good as they come from the land of the rising sun. The gearing is super-short giving excellent pace off-the-line; ideal for all the traffic light GPs, however it does take its toll on the bike’s cruising abilities. The engine feels laborious and runs out-of-breath past its midrange and doesn’t rev as freely as mills from any of its rivals be it Honda, Suzuki, TVS or even Bajaj. The lack of tall fifth gear and a weak top-end mean that the Fazer isn’t really ‘ready for touring’. Whatever the promos may say, the bike remains a city slicker and the whole touring hoopla is just a different theme the advertising agencies were told to come up with. 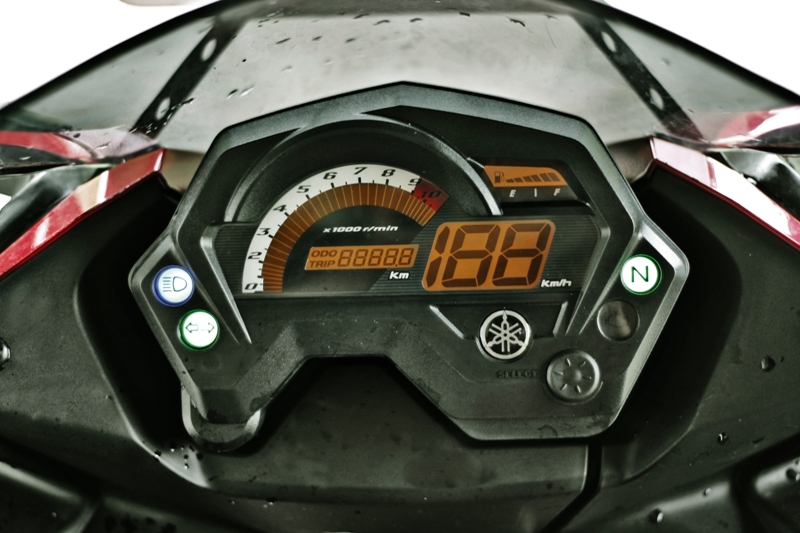 The Fazer has first-rate cycle-parts with those ridiculously fat tires, front and rear, suspended from equally fat front forks and a mono-shock at the rear. Its handling capabilities far outweigh those of the engine. And it is this excessive over-engineering that makes the FZ line of models so likeable. I think that it bears an uncanny resemblance of character to the sporty SUVs or SAVs like say a Porsche Cayenne a BMW X6. It has ultra-wide low profile tyres and a stiff suspension but, it won’t really break lap records at the track, just like an X6. It has enough grip and confidence to blast through potholes, gravel and muck without worries, but the fat rubber hampers its feedback, which is evident on stretches of smooth tarmac, just like an X6. One more thing that it shares with the SUVs is the fuel efficiency or the lack of it, again, just like an X6! 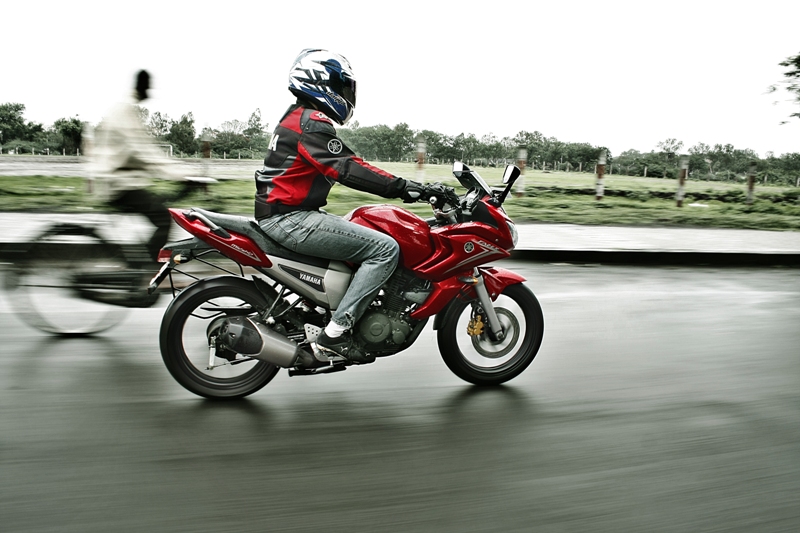 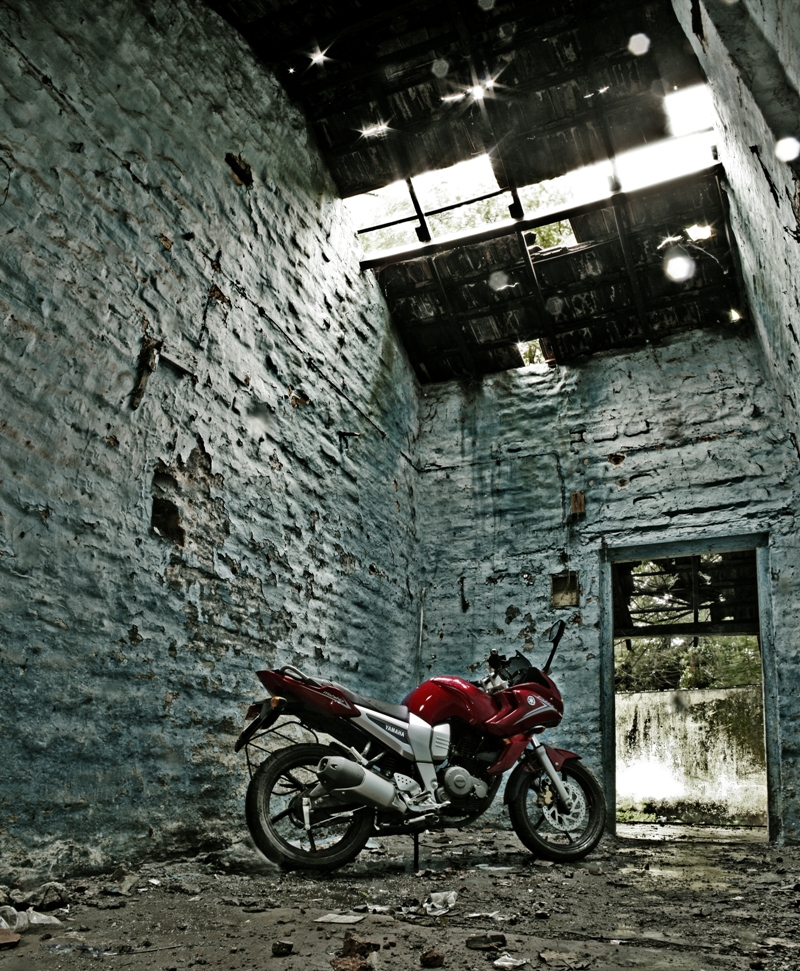 When I saw the FZ-16 I instantly thought that this is what the Pulsar should’ve become. The first generation Pulsar started off as a naked street-fighter but gradually lost the plot with each upgrade. Bolting on a fairing to an already successful model is easy money, but the Pulsar brand lost its identity. Is the FZ treading the same path? Maybe, this is what happens when manufacturer delivers far too much to customer demands. Then there is the matter of price. At Rs. 80,799 (On-Road, Pune), it is around 15 grand more expensive than its 150cc rivals. Agreed that the FZ is dynamically far more accomplished than any of its 150 cc rivals but engine could’ve been better.  Instead of adding increasingly bigger fairings to the FZ, Yamaha should’ve kept the FZ a street-fighter and should have opted for a different, bigger platform for a touring bike.

Overall the Fazer along with the FZ16 and the FZ-S can lay claim on the top-spot in the 150 cc segment (not considering the R15 that is), but only by a whisker and certainly not enough to ask for such a hefty premium over its rivals. Its price-tag does put it bang into the new Pulsar 220 and Karizma territory, both of which are potent machines in their own right, especially the new 220 with a lot of standard kit, good-performance, and fantastic value-for-money. The actual Fazer (the 1000cc one) is based on the ‘06-07 R1 and gets all the hi-tech stuff from the superbike, why can’t our Fazer be based on the R15 platform tweaked suitably for torque and touring? Or do we have to wait till the third attempt?