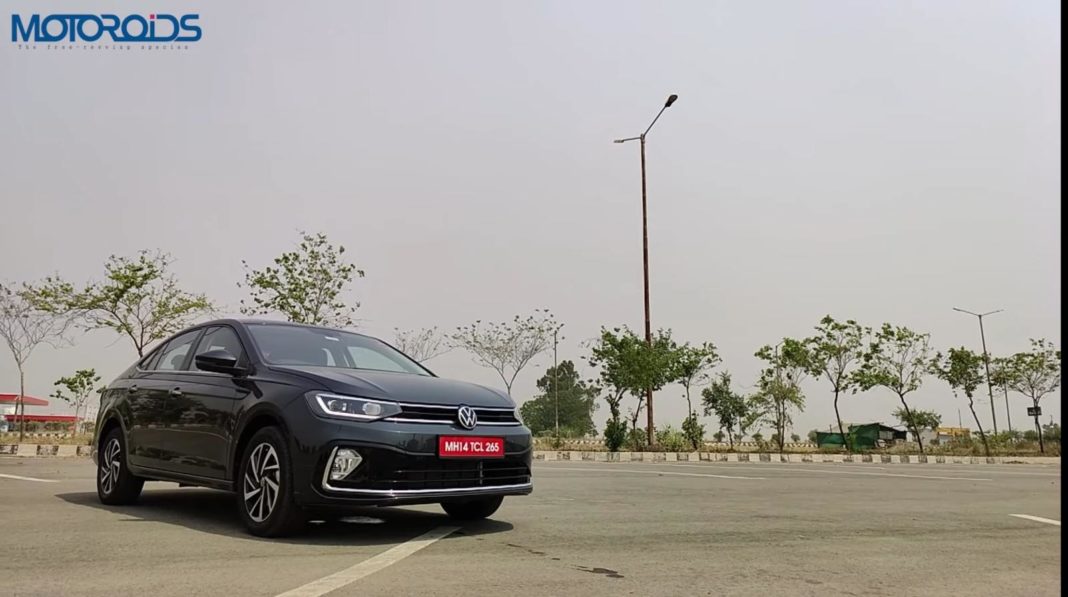 The Volkswagen Polo and Vento created a new breed of enthusiasts in India with their excellent handling and powerful powertrains. However, Volkswagen recently pulled the plug on them due to their age. Now, Volkswagen is all set to launch the all new Virtus which has surely got a lot riding on its shoulders. Can this sedan fulfill the need of enthusiasts? Let’s find out!

The Virtus claims to be the biggest mid-size sedan that you can buy today. It measures  4,651 mm in length, 1,507 mm in height, and 1,752mm in width. The wheelbase is 2651 mm which is the best-in-class and similar to the Skoda Slavia. The Virtus features a clean and understated design that we have come to see in other Volkswagen cars.

The front features a thin grille with chrome outlines on the top and bottom. The chrome lines merge into the LED DRLs of the LED headlights which form a C-shape. The lower half of the bumper features a large black air dam with vertically placed LED foglamps on each side. This makes the Virtus remind you of the erstwhile Jetta. The side features 16-inch alloy wheels.

The rear gets blacked-out LED taillamps and a chrome element on the lower half of the bumper. To add excitement, the GT variant gets a GT badge on the grille and front fenders, blacked-out alloy wheels, a dual-tone roof, black ORVMs, and red brake calipers. The overall design has a mix of sportiness and timelessness to it which is a common trait in Volkswagen cars. 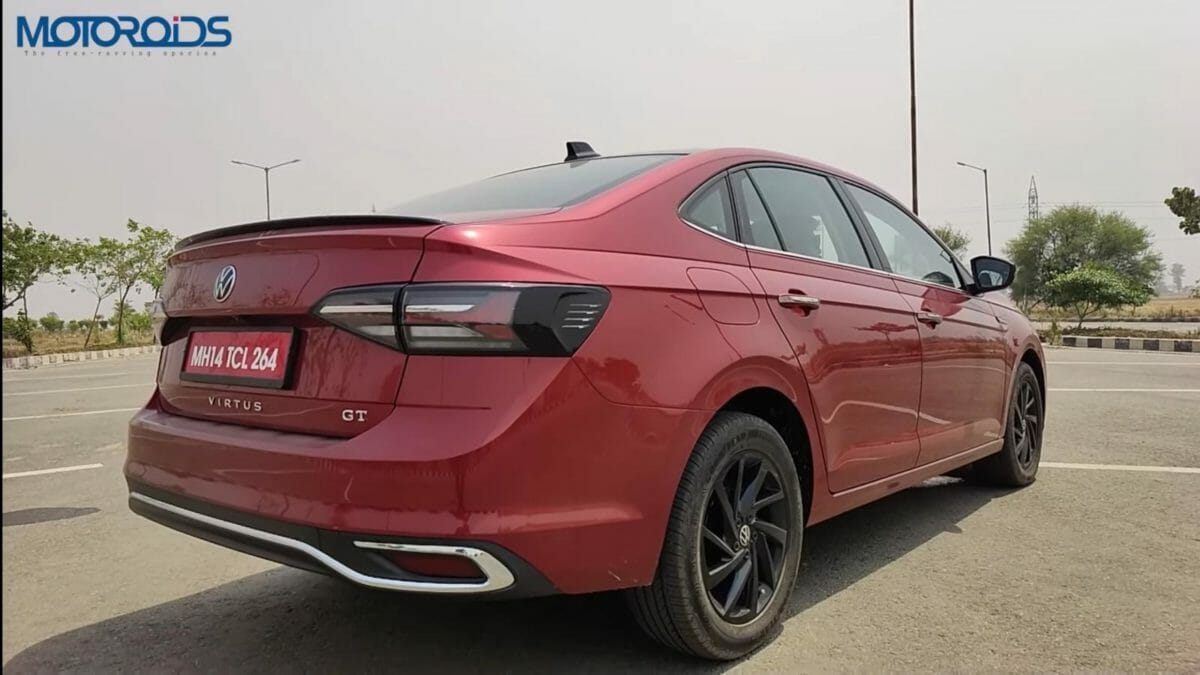 The Virtus gets dual-tone black and beige interiors. The overall layout is typically Volkswagen with clean lines. You will notice a lot of parts shared with the Taigun SUV such as the multifunction steering wheel, the door handles, the touch-sensitive climate control unit, and the gear knob. The GT variant adds a red panel on the dash and door panels just like the Taigun. Other additions in the GT variant include aluminum pedals, red ambient lighting, and red stitching on the seats.

The leather seats are very well bolstered and they are comfortable enough for long journeys. Though the interior may not get any soft touch materials, the overall quality is good and built to last in typical VW fashion. The center stage is taken up by a 10-inch touchscreen infotainment system which comes with wireless Android Auto and Apple Carplay. It also comes with 8 speakers as standard.

In terms of features, it gets automatic climate control, a reverse parking camera, an 8-inch virtual cockpit display, auto headlamps, auto wipers, auto-dimming inside rearview mirror, auto-folding mirrors, wireless charging, ventilated seats, electric sunroof, cruise control, and keyless entry with push-button start. The rear seats are comfortable and well contoured. The under thigh support and legroom are sufficient for people with large build and even the headroom is something that you won’t complain about.

The seat width however, is suited for two people rather than three. Even the seats feel a little firm when compared to the Slavia. In terms of features at the back, you get 60:40 folding seats, rear A/C vents, 3-point seat belt for the middle passenger, three adjustable headrests and a centre armrest. The boot space is rated at 521 liters which is among the best in its class.

The Virtus comes with a host of safety features such as brake disc wiping, ASR, MSR, Electronic differential lock with XDS and XDS+, three-point seatbelts for all the rear passengers, multi-collision braking, 6 airbags, TPMS, HHC, ABS, and EBD, and TCS.

The Virtus comes with two petrol engines which come with idle start/stop technology. The turbocharged 1.0-liter 3 cylinder TSI engine produces 115hp and 178 Nm of torque mated to a 6-speed manual and 6-speed torque converter automatic transmission. This engine will see a lot of takers considering that it will be priced lower than the GT variants. Though it is a 3-cylinder unit, it is very well refined and you won’t complain.

The engine has a good mid-range and the performance is par for the course as well with 0-100 km/h coming in around 11 seconds. The 6-speed torque converter automatic deserves a special mention since it masks the intial lag of the 1.0 TSI very well. The shifts are quick and smooth whether its in the city or the highway. Coming to the more powerful GT variant, it gets a  turbocharged 1.5-liter 4-cylinder TSI engine which produces 150hp and 250 Nm of torque mated to a 6-speed manual or 7 speed DSG dual-clutch automatic transmission.

This engine also comes with cylinder deactivation technology. This engine makes the Virtus an enthusiast’s choice. If budget is not a constraint, buyers should definitely consider this powertrain because it is F-A-S-T! The DSG gearbox is lighting quick with the shifts and using the paddle shifters is a joy. The Virtus GT can achieve a top speed of 190km/h and 0-100 km/h can be easily achieved around the 9 second mark. 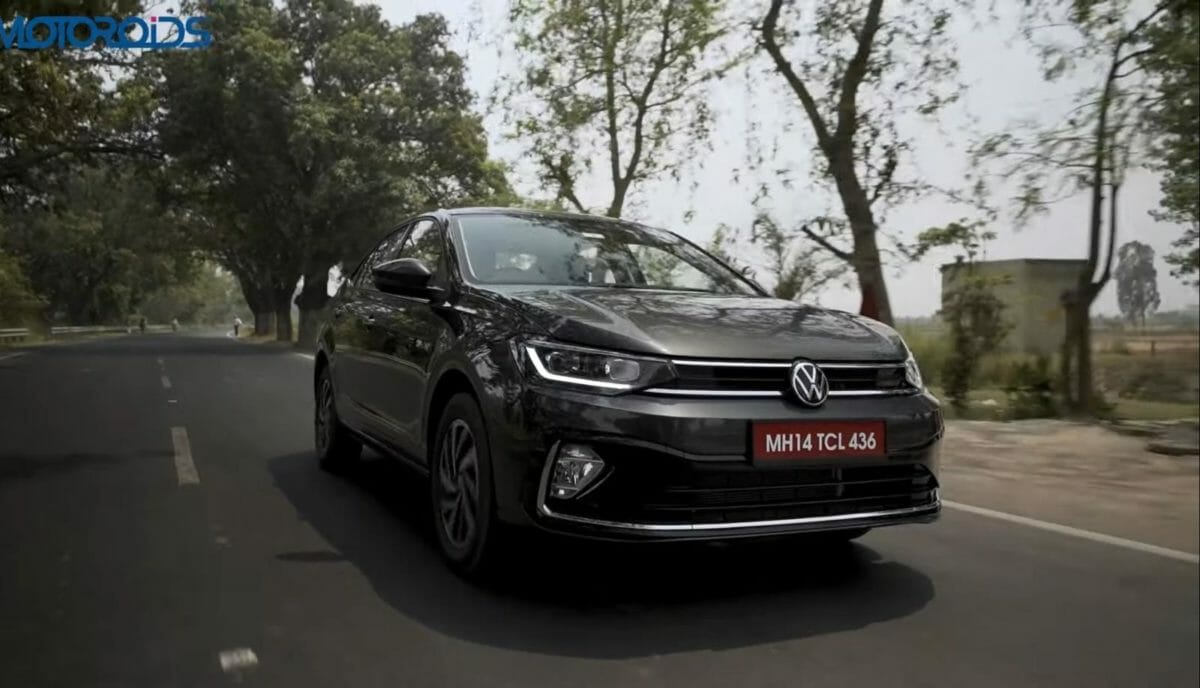 Volskwagens are known to be great handling cars and the Virtus is no different. Though the suspension has been tuned to provide a fine balance between ride and handling, it is clearly more biased towards the fun side. It responds well to steering inputs and takes the corners with great poise. The suspension is definitely stiffer than the Slavia and the same can be felt on rough roads. The GT variant feels more stiffer at the front thanks to the heavier 1.5 TSI engine. The steering is among the best in its class and one can easily chuck the car into corners with confidence. Braking inspires confidence too and you have a suite of electronic aids to make sure that you are safe.

The Volskwagen Virtus is one of the best all rounders in its segment. It looks great, its packed with features, its spacious enough, its well built and lastly, it will put a smile across your face no matter which powertrain you choose. Though the GT variant may not be accessible to everyone, the 1.0 TSI makes a strong case for itself. We expect the Virtus to be priced at a premium starting around ₹11 lakh considering the brand value Volkswagen carries and the amount of standard equipment that it gets.