A potent diesel with a quick DSG is a combination which has almost invariably managed to put a big smile on our faces. The fact that all the cars donning the combo emerge from the VW Group brands also means that their dynamic ability is also quite distinguished. So while the dual clutch delight made it to the Polo in its petrol engine variant sometime back, it still eluded diesel lovers who wanted to own this piece of kit on a tight budget. 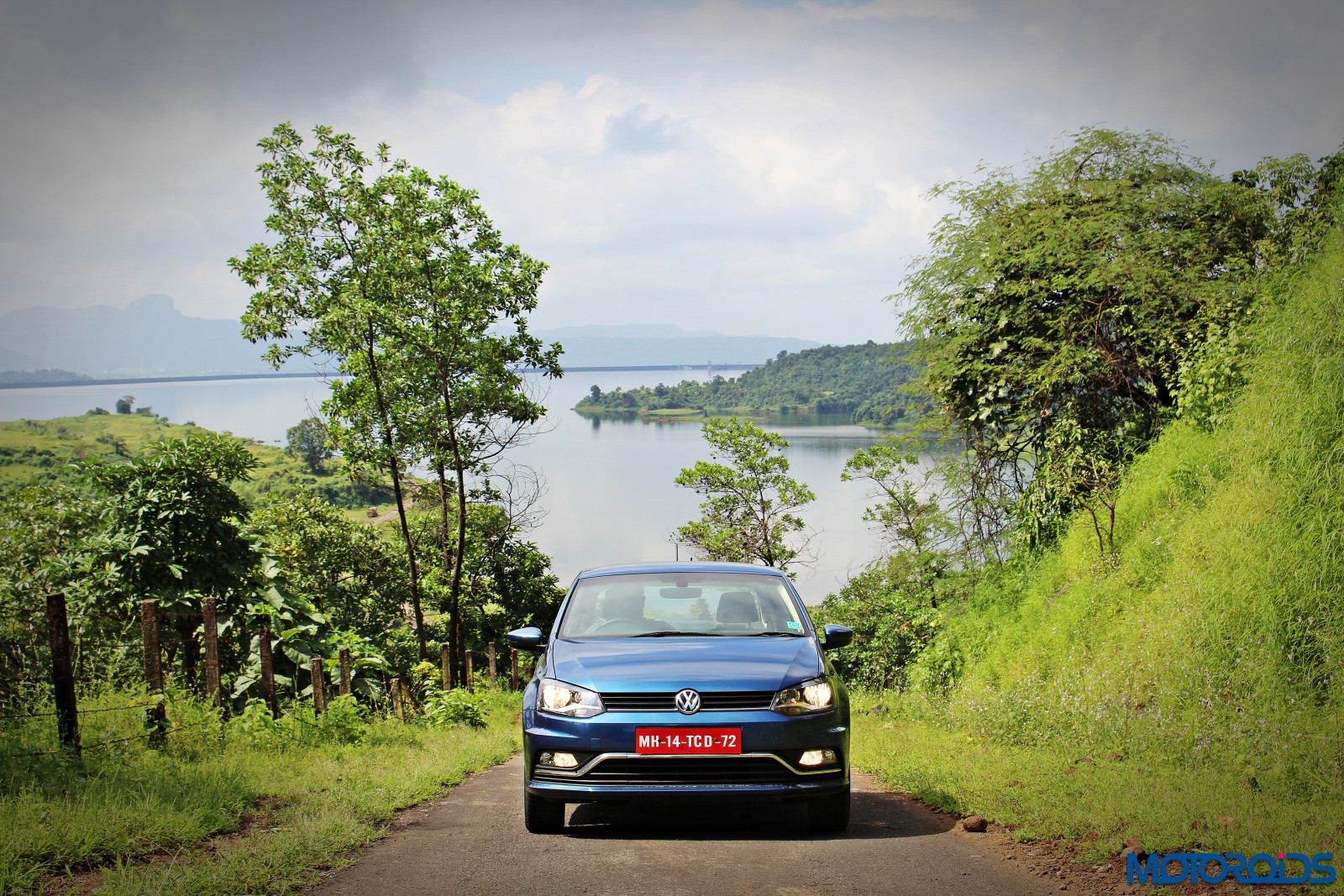 That changes with the new Volkswagen Ameo, though, and we cannot stress enough on how much this new VW model will change the dynamics its own segment. We drove the new car through some interesting country roads, and the new compact sedan endeared itself to us. Sure a beautiful post monsoon day with tufts of cottony clouds patching the blue sky had its part to play to add to the delight, the Ameo diesel DSG too, turned the perfect partner.

To start off, the 1.5-litre 4-cylinder diesel on the car is not exactly the same as the one seen on the bigger Vento. This one here gets 5hp more power and is now rated at 110PS, though the torque rating remains unchanged at 250Nm, produced between a pleasantly low and wide rev band of 1500-3000 rpm. 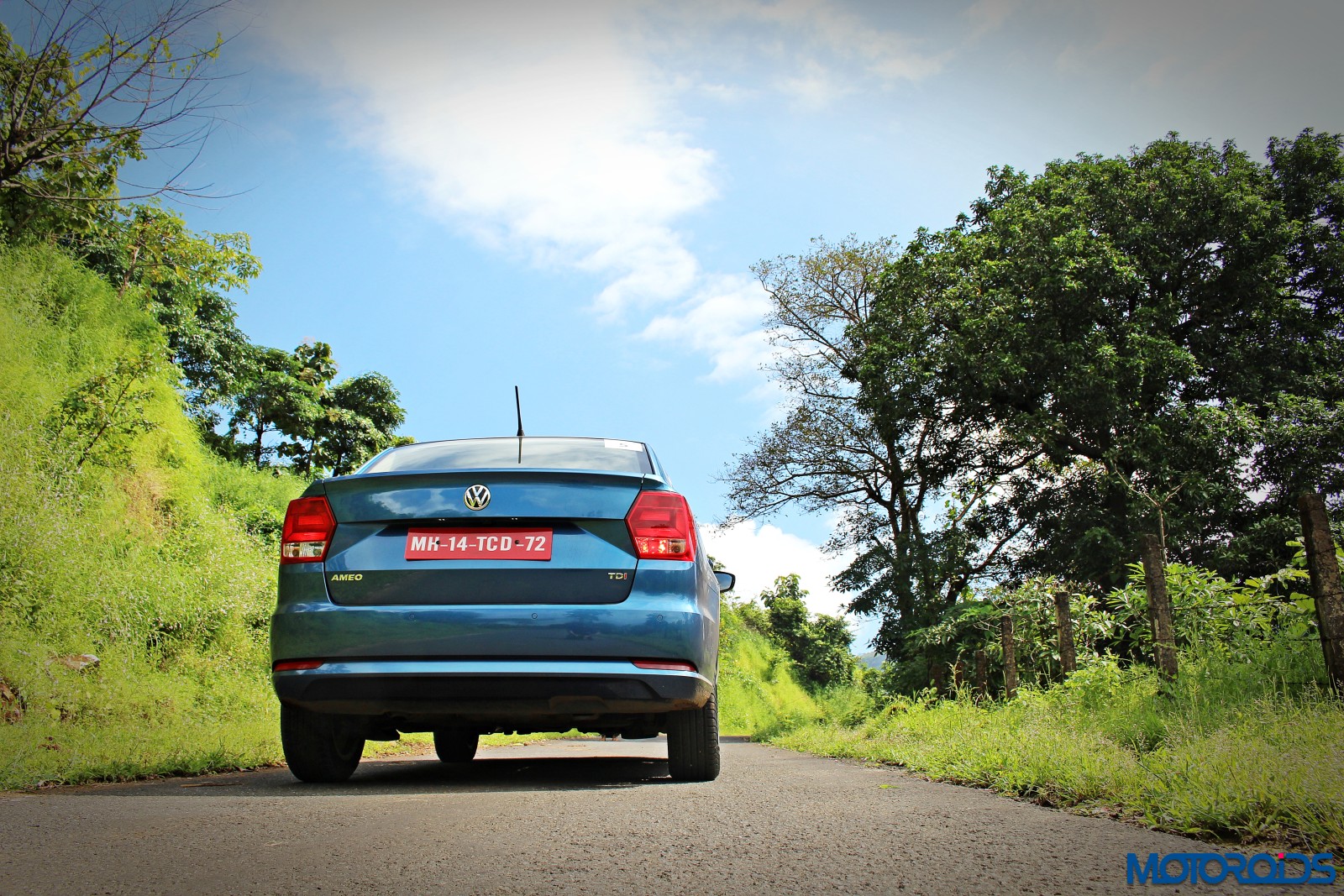 There’s no fancy push button start here, so twist the key and the engine comes to life with a rather familiar diesel clatter. This noise is more pronounced when you hear the motor running from the outside. On the inside, the heavy insulation keeps the unwelcome sounds out rather well.

Nothing has changed inside the cabin as compared to the petrol powered Ameo which was launched a couple of months back. The interior, though understated, is immaculately built and very feature rich. You can read all about the in-cabin comfort, features and aspects other than the powertrain and dynamics in our exhaustive review of the petrol version of the car here. 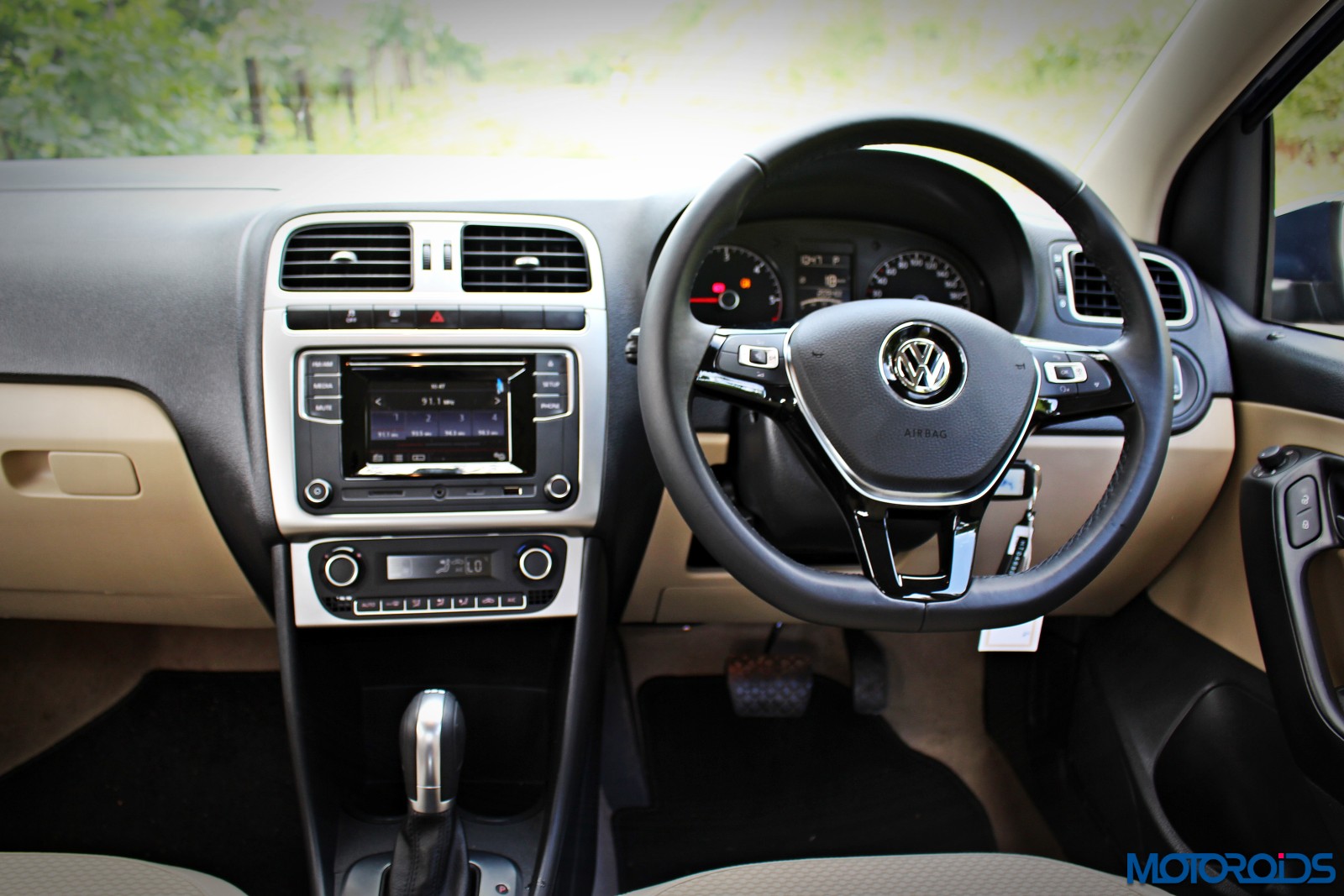 What has changed, as expected are the markings on the rev counter, which is now redlined at 5000 rpm. You also get the aluminium finish drive selector for DSG with its PRNDS markings along with the option to slide it to its left and then move it fore and aft for manual shifts.

The 1.5 diesel unit on the Ameo is rather linear inits power delivery and exhibits Volkswagen’s mastery of diesel powerplants with its responsiveness and rev-happy nature for an oil burner. Power starts building from as low as 1200-1300revs, though you’d get a hint of the kick you’ve become used to with your diesel engines once the rev needle swings past the 2K mark. This engine feels very petrol-like in the way it revs, especially through the practical rev band of 1300 – 3000 rpm. It’s pretty smooth too, devoid of any unwanted roughness. Post 3000 revs, some noise starts filtering through though it’s nothing bothersome. What would delight you, though, is the propensity of that tacho needle to dance all the way to the 5K redline, kiss it, and come back to a lower point, eager to repeat the drill all over again. 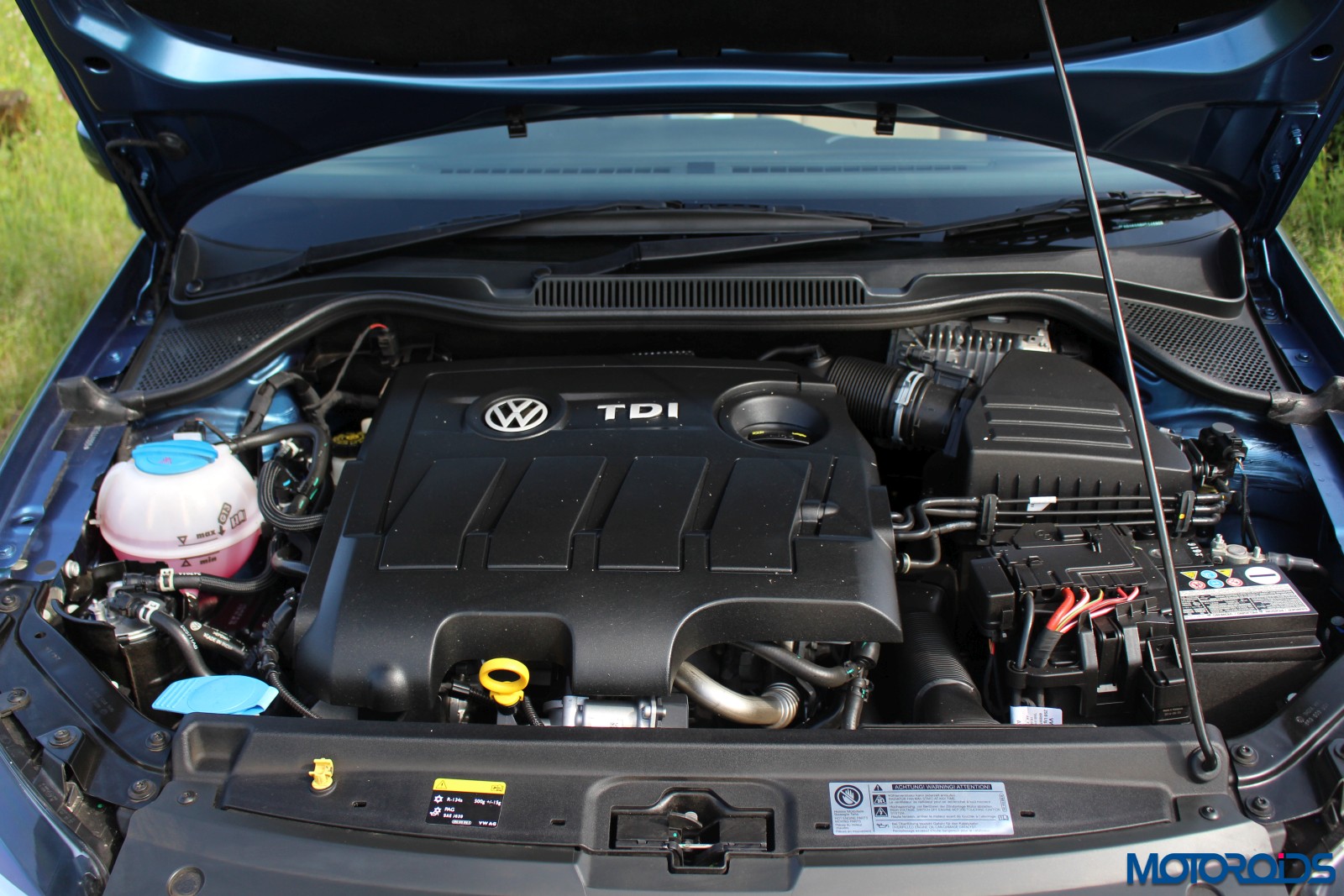 It’s heartening to see a diesel engine not resisting being revved, and the Ameo makes itself a very likeable machine for this reason alone. A light 1170 kg (average among variants) weight (with 90% fuel) helps matters and the Ameo feels pretty spry and ready to accelerate in any gear.

This is where the mid-range torque of a diesel powerplants feels so nice in the real world for a driving enthusiast. Even with three or four passengers aboard, or widely varying driving styles, the fuel efficiency or performance of a diesel unit doesn’t fluctuate by much. A small-engined petrol car, when loaded up or driven with a heavy foot can deliver wildly different results though. And much as we love the Polo GTI 1.2 TSI, the Ameo 1.5 DSG feels all that more practical and is all that more efficient through a wide range of passenger loads and driving styles. 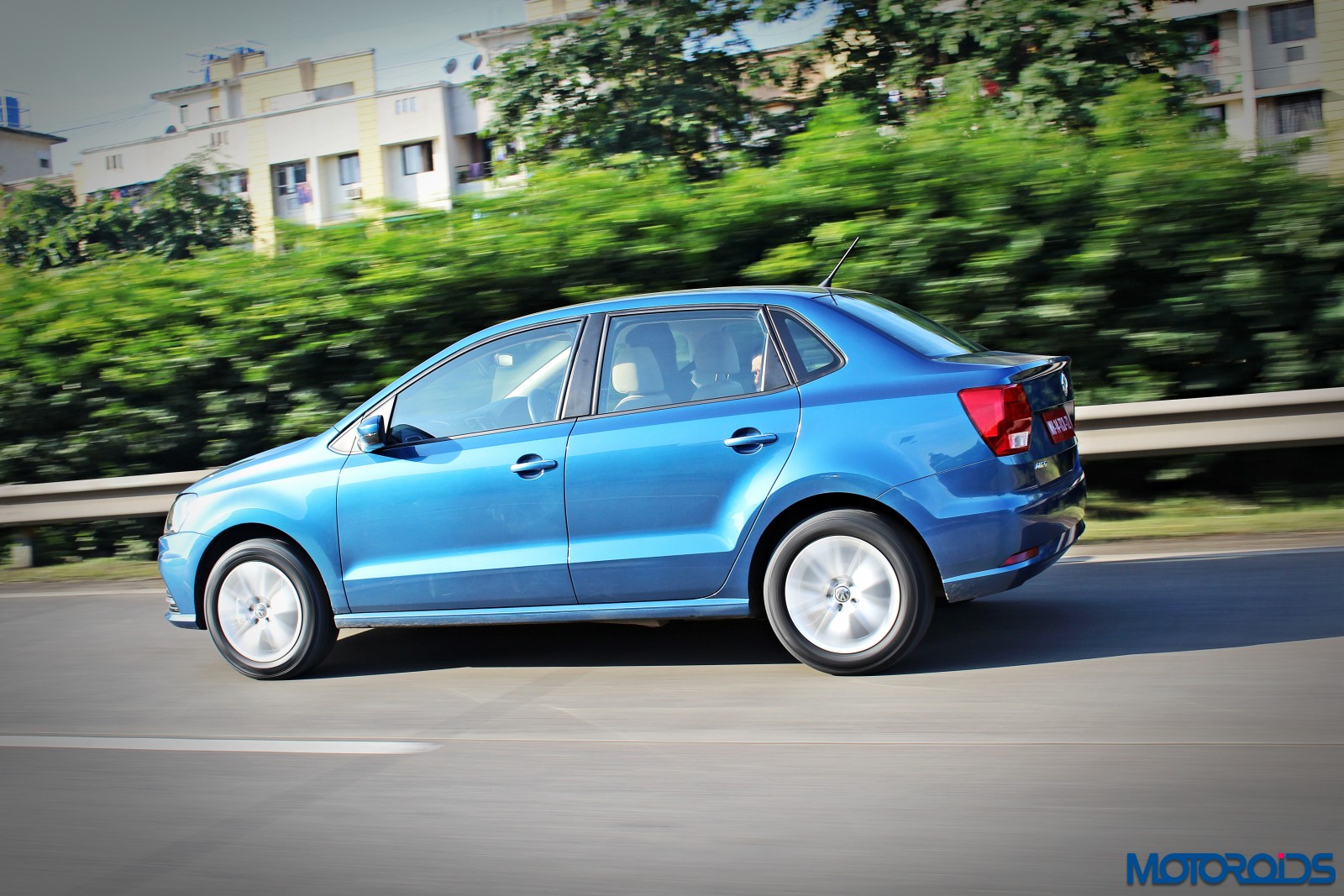 In normal D mode, the shifts come early, or relatively late, depending on how heavy a right foot you have. The DSG has been around for some time, and although it leads any other automatic offering above and beyond its price range by a big margin, after having driven some quicker boxes, we do feel a hint of lag, evident to the seasoned senses primarily in the normal mode. As mentioned before, though, it’s still incomparably quicker than any of the hardware the Japanese or the Koreans have on offer.

In Sport mode, the transmission tightens up its act, gets perceptibly quicker and does away with any leanings to save precious fuel in favour of hurling this Made for India car horizonwards at a faster rate. Shift points are moved further up, and the tacho needle would now kiss 4700 revs before letting the next gear engage. During the course of all this, the Ameo feels very likeably alive and urges you to drive it fast. In-gear acceleration is strong and part throttle is responded to by clean, doubtless acceleration for effortless overtaking. 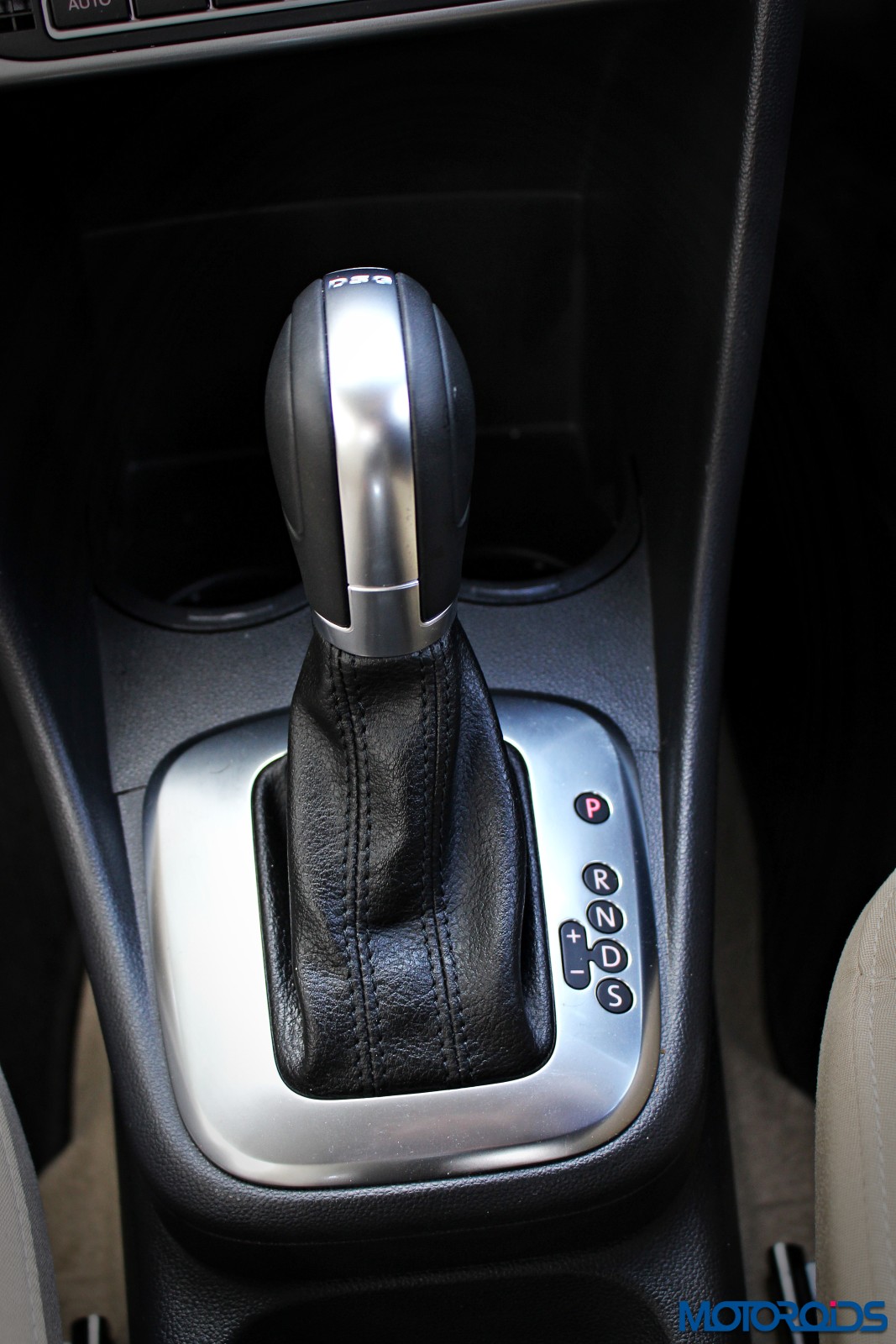 Manual mode lets the tacho needle go a notch higher, all the way up to 5,000 revs though it doesn’t hold onto a gear and engages the next cog immediately after hitting the redline.

Fuel efficiency for the 7-speed DSG variant is rated at 21.66kmpl by ARAI, which is fantastic for an automatic. Depending on the conditions you’re driving in and your own driving style, you can expect a real world efficiency ranging from 14-18 kmpl.

The steering on the car is light and precise. Without the artificially induced weight we often lament in some other cars, it lets you position the car accurately on the road and allows for great handling without compromising  the ease of maneuverability. 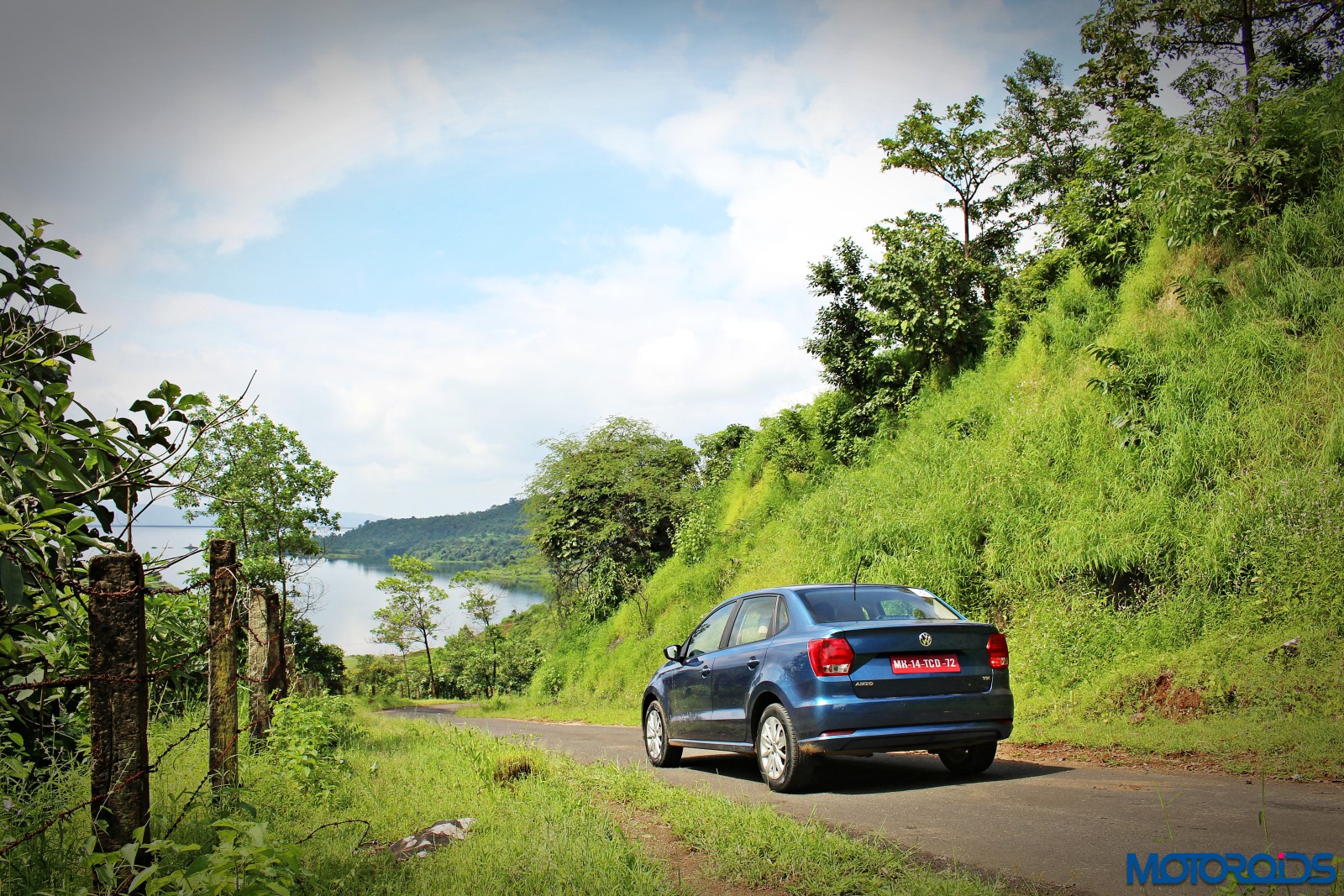 The ride quality on the Ameo diesel is slightly stiffer as compared to its petrol sibling, and honestly, we prefer it this way. With the more powerful, torquier and heavier diesel engine under the bonnet, the Ameo’s suspension had to be tuned to handle more speed and weight, and the boffins at Volkswagen have pulled off a stellar job of it. The Ameo is arguably the best handling car in its segment, and by a fair margin, while still offering an absorbent ride. It has shed the relative softness of the petrol Ameo and now feels tauter, more ready for action, more enthralling to drive without making the back benchers bounce around.

In terms of features and amenities, the Ameo gets a whole bunch of first in class equipment. The list is led by the fabulous 7-speed dual clutch auto transmission and includes cruise control, rain sensing wipers, anti-pinch power windows (front and rear), front central armrest and static cornering lights. Dual front airbags along with ABS are standard across all variants, which is commendable. The DSG variant we drove also comes with an Electronic Stability Program and Hill Hold Control. 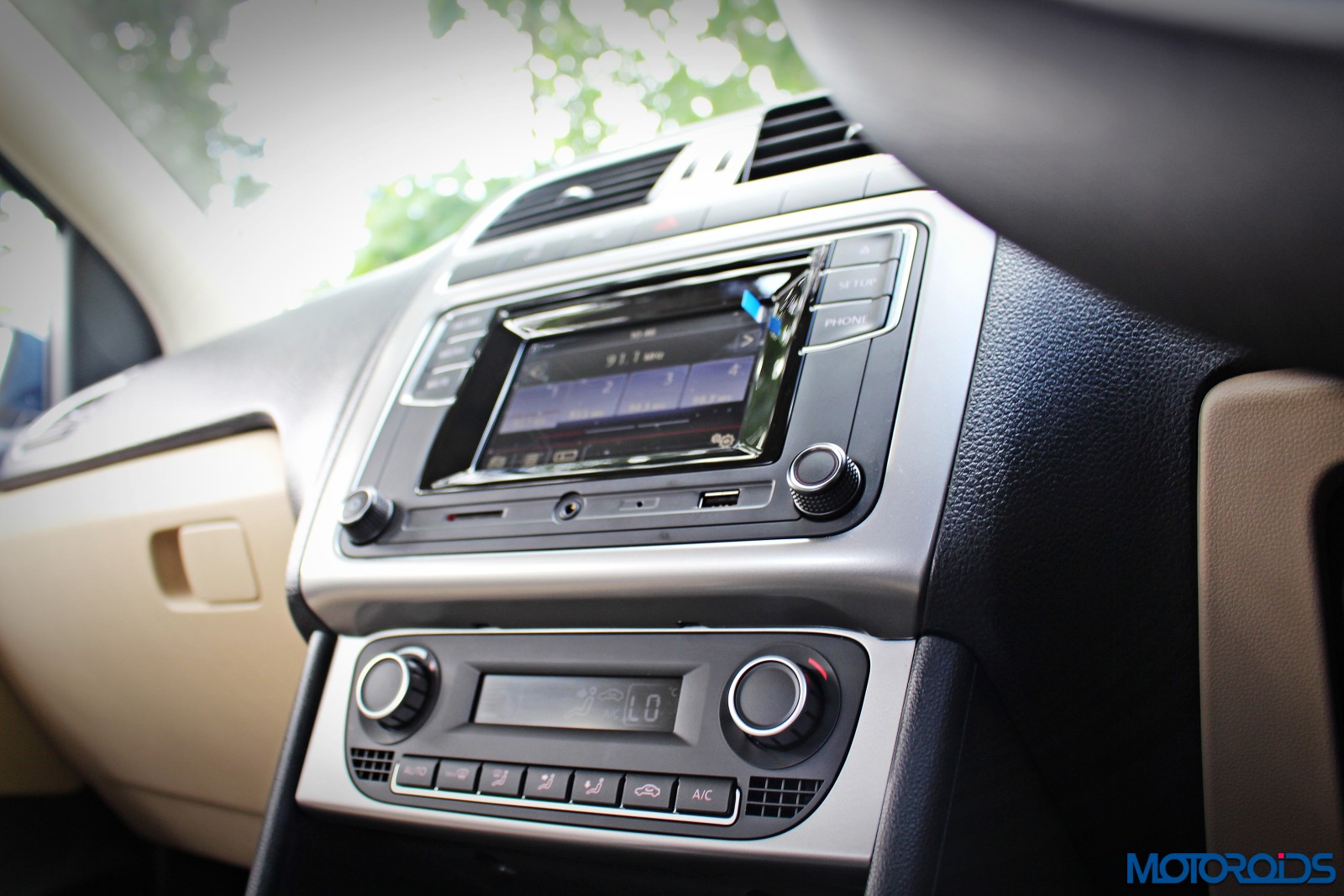 The Ameo also gets a bunch of cool features such as a rear view camera with parking sensors, Climatronic auto A/C with a dust and pollen filter, electric foldable ORVMs with turn indicators, a cooled glove box, an auto dimming inner RVM, and a tilt/telescopic adjustable steering wheel. A for infotainment a touchscreen multimedia music system with USB/Aux-in/SD Card/ CD compatibility, Mirror Link, phonebook and SMS viewer  and four speaker is pretty much the best you can get for the class. You also get rear A/C vents, which is a great feature to have in our conditions. Fog lamps, both front and rear, defogger, electronic immobilizer and an info-rich multi function display are some other goodies.

Space at the rear seat isn’t the best, though the Ameo would seat four in good comfort. Fifth passenger would be a squeeze though. The Ameo also isn’t the ‘biggest’ looking car for the price – something a lot of Indian buyers attach a lot of value to. This one, however, is one of the most accomplished cars from an engineering and technological perspective. 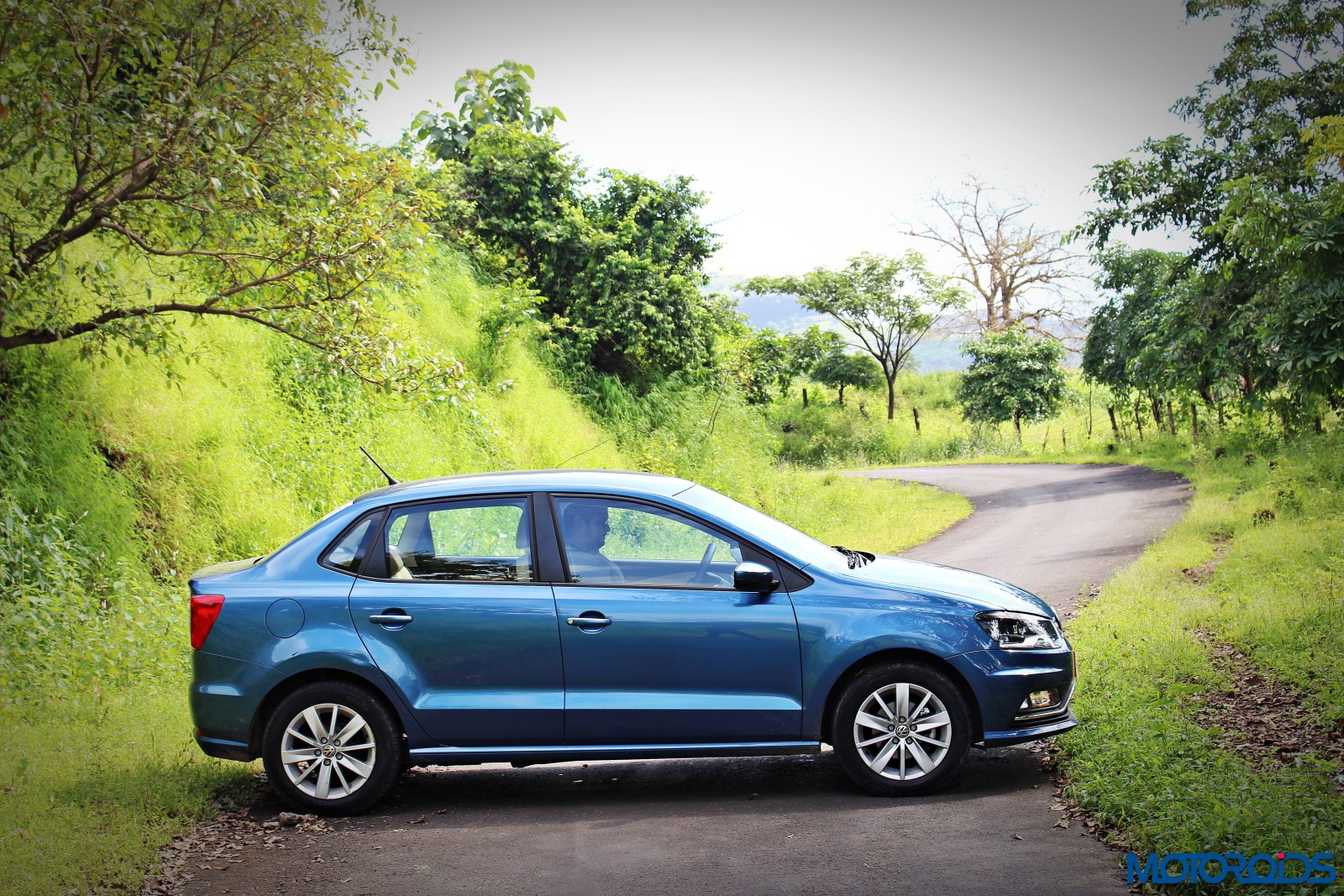 The Ameo diesel is more than just another player in the segment. A practical diesel compact sedan with a capable automatic transmission, good fuel efficiency, decent cabin and boot space, good brand value and a pocket friendly price is something that the Ameo offers as a first-in-segment package. Sure there are a couple of other offerings like the Dzire diesel AMT and the Zest diesel AMT. The Ameo, however, is very well-differentiated from the aforementioned products in terms of technology, performance, dynamic ability and as a product overall. 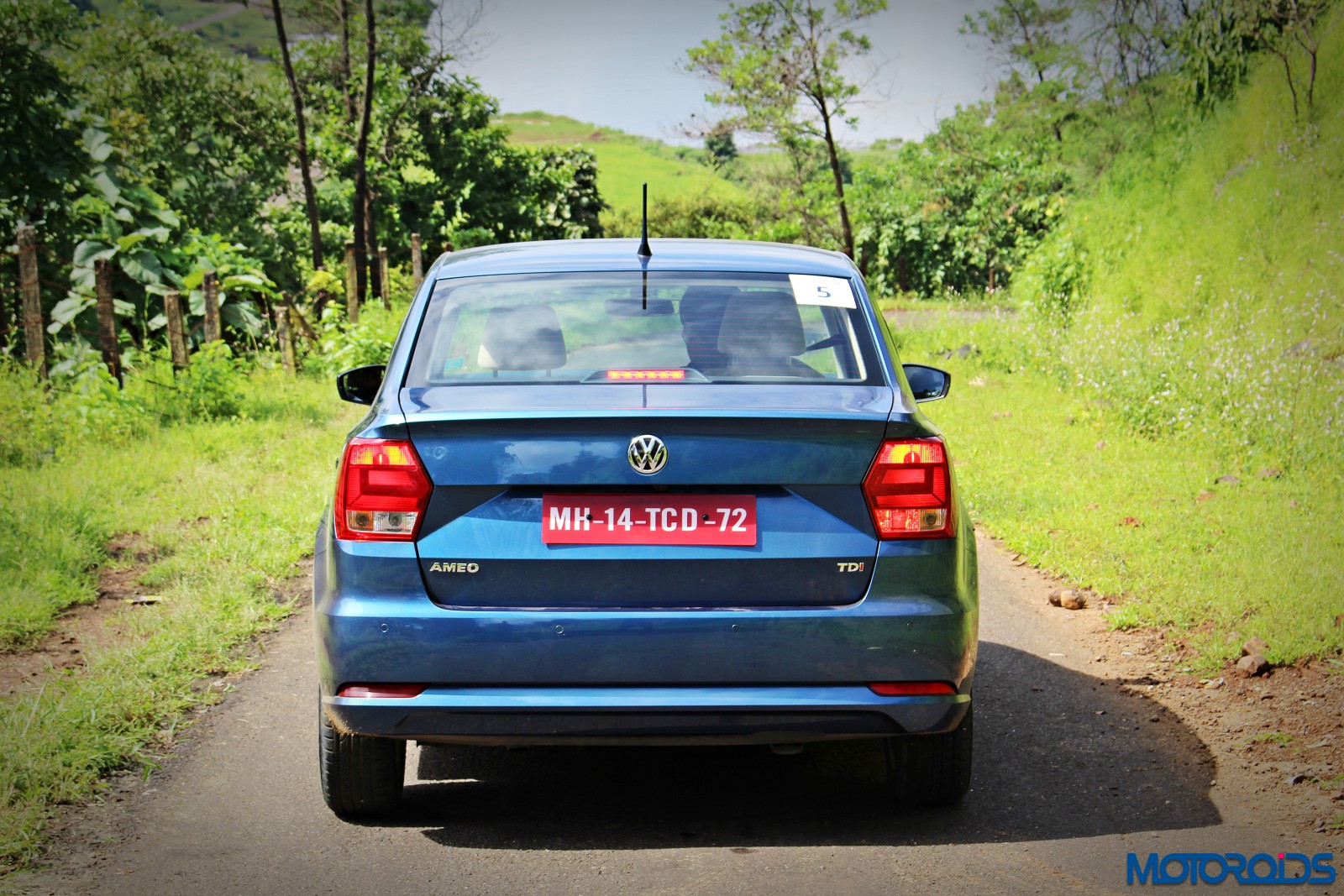 Prices for the Ameo DSG start at 8.4 lakh ex-Mumbai for the Comfortline, going up to 9.21 lakh for the Highline variant. Those prices are slightly higher than the respective competitors from the segment. The Ameo, however, is just too feature-laden, much better engineered much better as a product to be compared with the other two. If you’re looking for the best blend of performance, practicality, features, fuel efficiency and brand value for the least possible price in this specific segment – the Ameo diesel DSG is your go-to car.

Do let us know your views, questions or criticisms via the comments section below or through one of our social channels