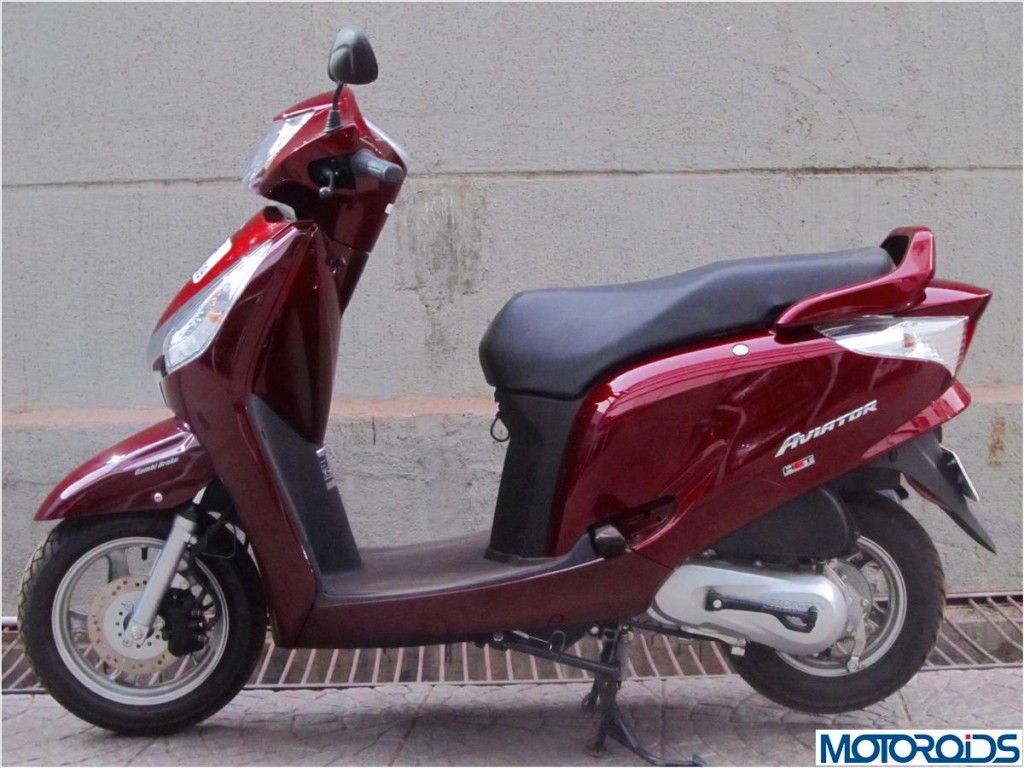 The term Aviator has always been associated with men, rather tough men. Top Gun, Ray Ban – name anything that holds the word Aviator and it would emanate a masculine appeal. No wonder with the other two scooters viz. the Activa and the Dio – one prominently appealing to the feminine segment and the other for gen-next, Honda launched the futuristic styled Aviator to cater to the urban executive male looking out for a stylish and efficient auto scoot. Topping it up with cherries like telescopic suspension and disc brakes (optional), Honda managed to click good sales numbers with its big looking scoot.

The Aviator always scored better than its rivals on the style quotient, but when it came to performance- the competition off late has been scoring marginally better grades with higher displaced engines. The Honda Aviator along with the best selling Activa and the trendy styled Dio had started facing the heat from its Japanese counterparts who were constantly churning out new products and variants. As a counter offensive measure Honda played the mileage card plonking in the new ‘Honda Eco Technology’ (HET) engines across the three scoots claiming a dream mileage of 60 kpl. We put the Honda Aviator HET to a comprehensive test to verify if Honda’s mileage claim comes anywhere close to reality. Read on! 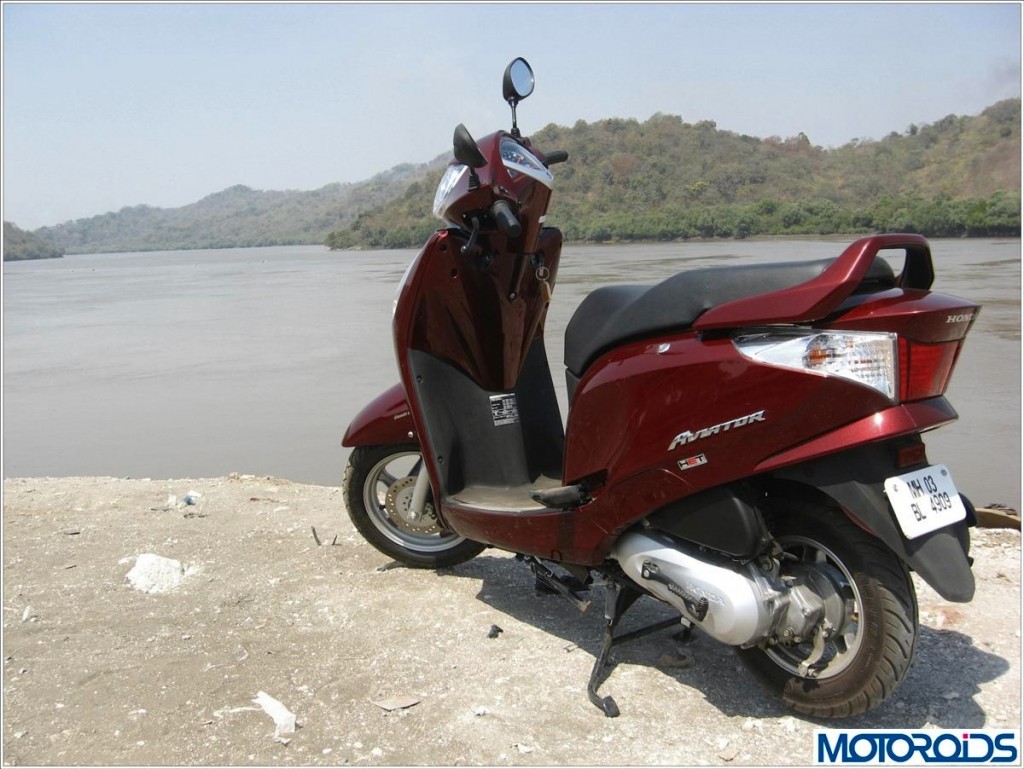 There is no disagreeing with the fact that the Honda Aviator is indeed a classy looking machine. The curvaceous front apron with vertical chrome garnishes and large blinkers lend the Aviator a suave look. The telescopic forks and the five spoke wheels clasping the 190mm front disc brake add to the futuristic appeal of the Aviator. The sharp cuts and creases extend all the way till the end meeting the sweeping oversized rear indicators with the pillion pegs smartly tucked into the side body. The large grab rails painted in body color give a natural upswept extension to the Aviator’s design. Overall the Aviator reeks elegance when it comes to design. No wonder Honda hasn’t tinkered around with the styling except adding the HET badge on the side panel and the Aviator is still one of the best, if not the best looking automatic scooters around today. 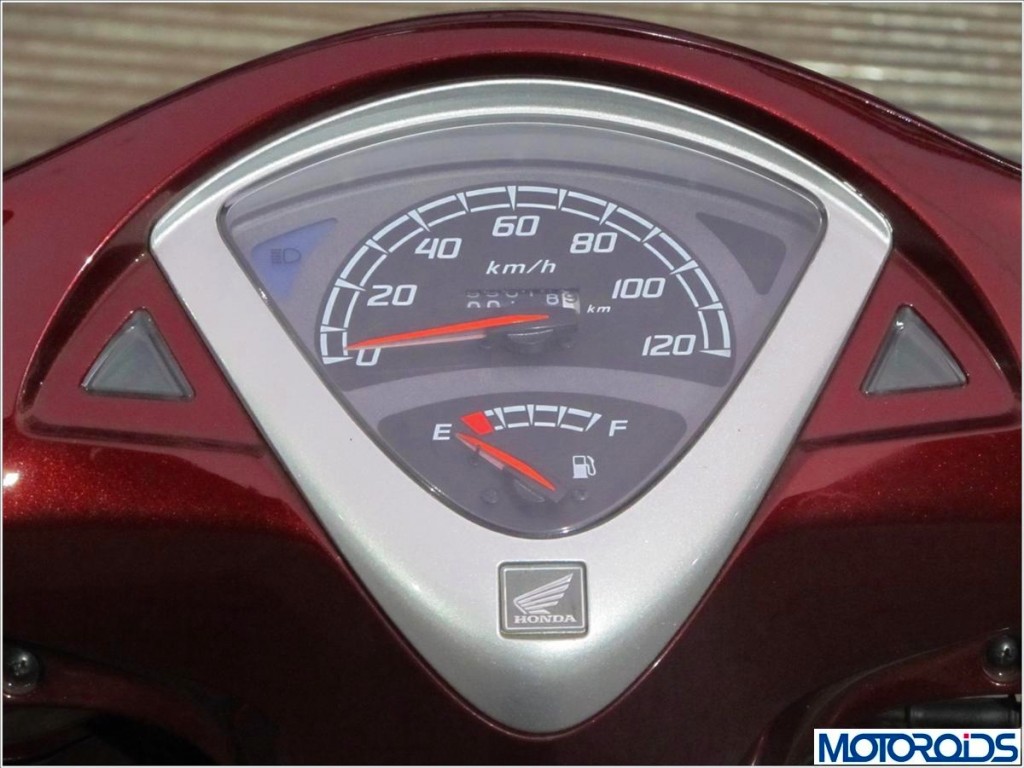 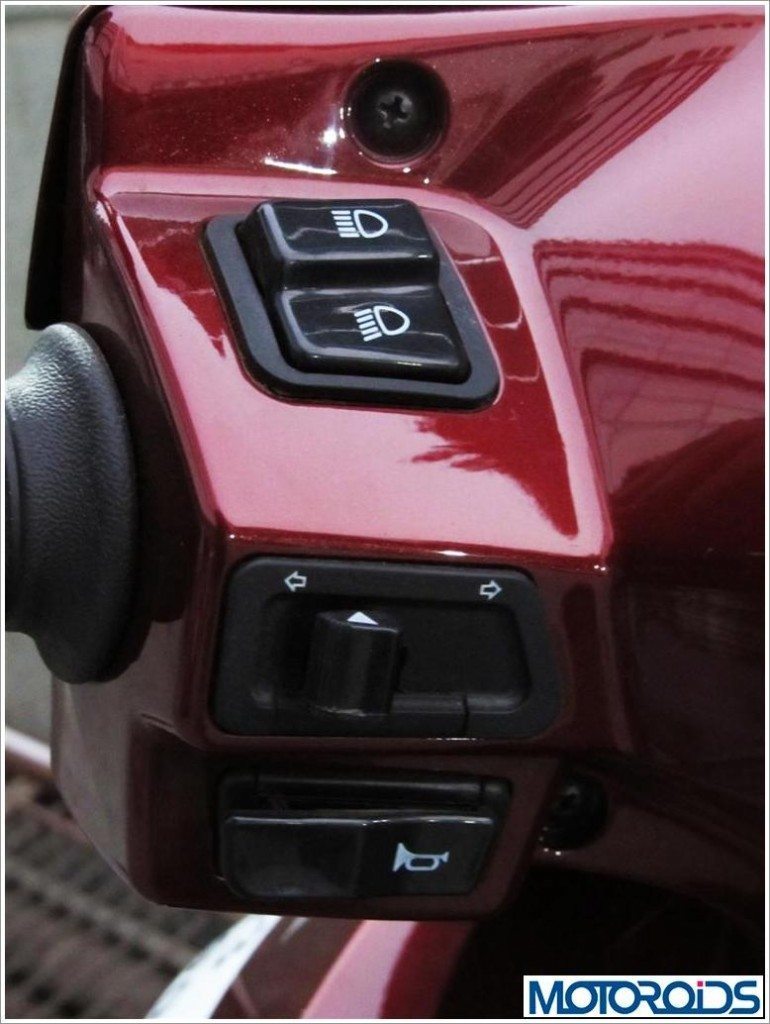 The instrument panel is maturely styled comprising of the speedometer and the fuel gauge indicated by neat red accentuated needles with easy to read large speedo fonts. The switchgear is ergonomically placed and unmistakably Honda in feel and build. 20 litres of underseat storage makes ample room to gulp a large sized helmet and would boot in reasonable amount of grocery during your routine market trips. The seat is broad and well contoured to comfort a large rider and pillion alike. The footboard is flat and offers generous space and comfort. 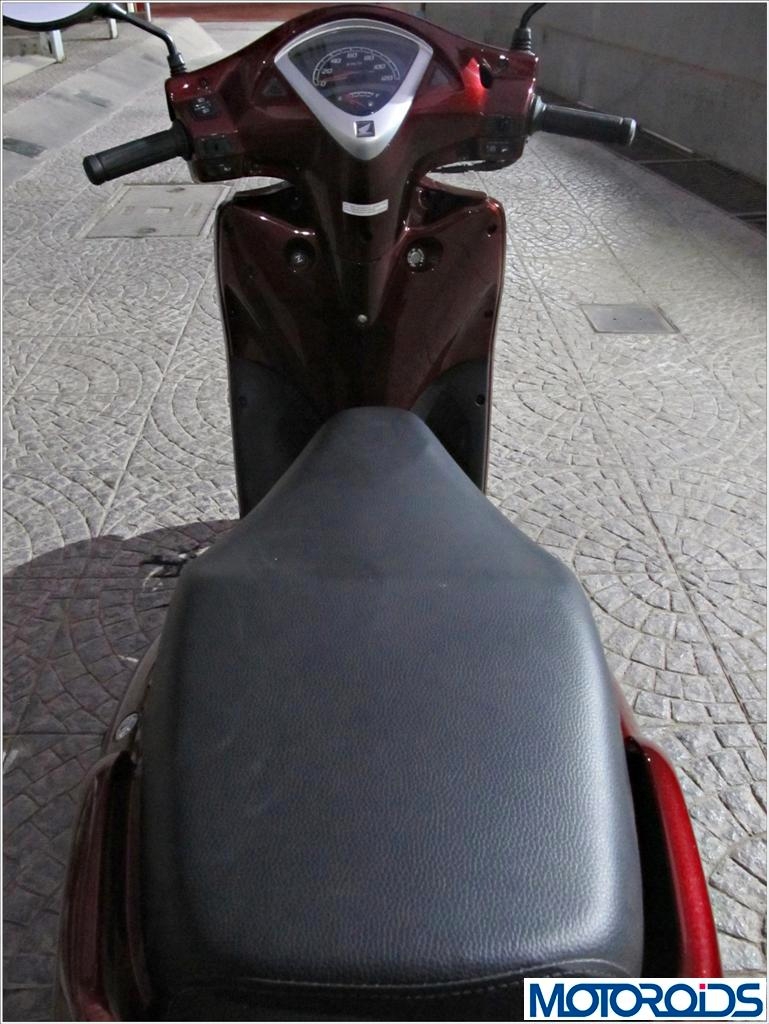 The Aviator has been designed keeping in mind ergonomics of tall riders. Apart from the generous leg room mentioned above, one feels slightly higher perched on the Aviator when compared to the Activa and the Dio with the seat height placed at 790mm as compared to 765mm on the other two. The handlebars too need a slight more extension of your arms to grab in comparison.

The tele-forked front suspension works well to absorb road undulations but dives under hard braking. An anti-dive feature similar to one on the Dio could have redressed this issue. The rear suspension feels slightly on the stiffer side but works well on two up riding. 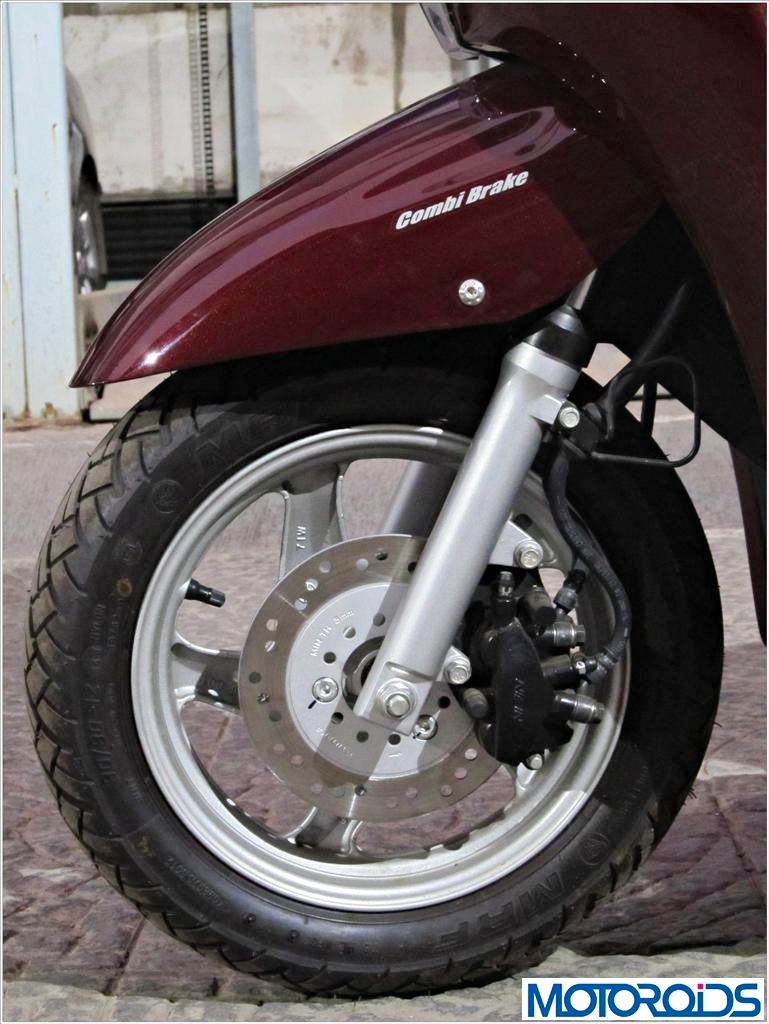 The front braking on the Aviator is best of the three Hondas- thanks to a disc brake setup (optional) with a combi-brake feature. Though not as sharp as the discs on a motorcycle, but indeed better than the drums found on most autoscoots today and works well in conjunction with the rear brake. The only issue as aforementioned is the dive at the front on harder squeeze of the right brake lever.

On the handling part, the Aviator is a steady player and taut during cornering. The tubeless MRF Zappers do their job well in holding the Aviator’s line going around the twisties. But taking corners on the Aviator needs getting used to. Due to a higher seating position (higher centre of gravity in scientific terms), one might feel reluctant at first but becomes natural in due course. 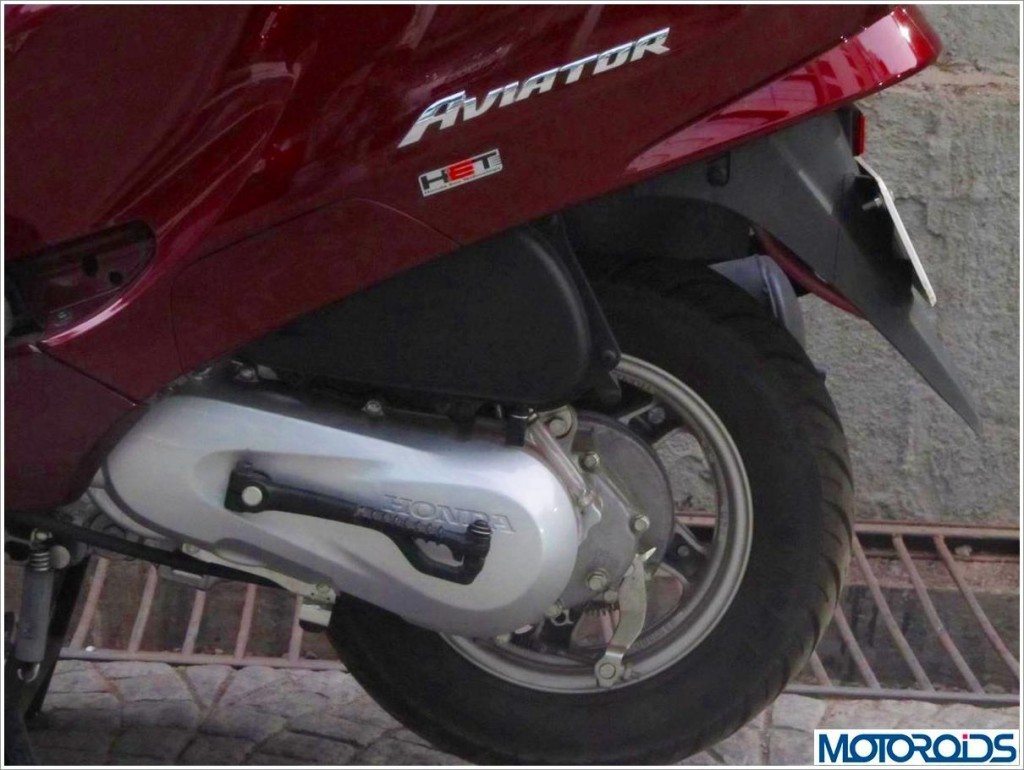 The only change in the new Aviator has been some alterations made to its heart. Honda engineers have reworked on the engine giving it mechanical tweaks for better efficiency without sacrificing on performance. In fact the new Honda Aviator HET rides smoother than the earlier version cranking an unchanged 8 bhp, but at a lesser thousand revs. Torque has been improved by 0.03 nm over its predecessor and now produces 8.77 nm @ 5500 rpm. So what exactly has Honda done? We’ll explain. 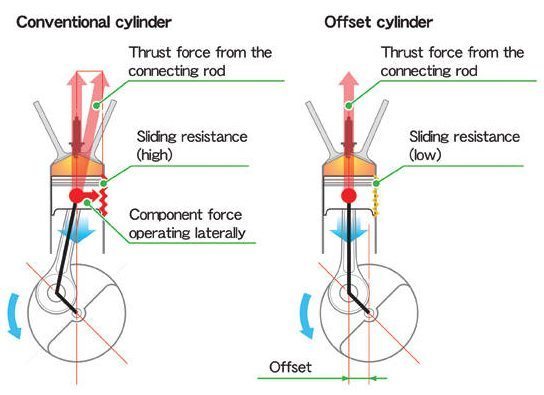 The crank geometry in the new Honda Aviator HET stands revised and now features an offset crank with a low tension piston ring which reduces piston slide resistance. Improvement in bearing seals, use of lighter reciprocating parts and optimization of the pulley convertor has resulted in minimizing drag resistance of cycle parts. The conventional spark plug has now been replaced by highly ignitable nickel spark plug with an optimized induction port for better air-fuel mixture intake. Overall the power stroke is generated with reduced internal stress resulting in an efficient combustion process. 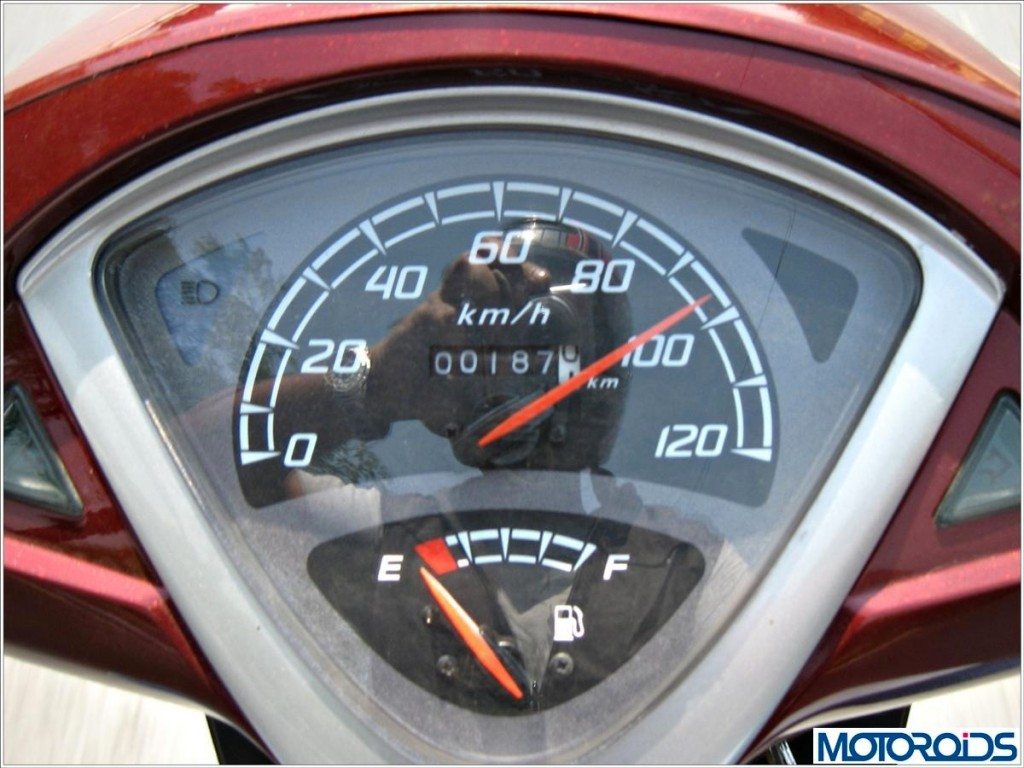 With visually no changes to the new Honda Aviator except the HET badge, one would need a decent amount of spin on the scoot to make out the improvements. The new Aviator feels more refined with improved bottom end grunt- both which can we felt once you crack open the throttle. The Aviator hit a top speed of 96 kph on the speedometer during our test run and underwent a lot of hammering in the blistering summer heat. However, it showed no grumpy signs whatsoever behaving like a typical Honda retaining the refinement throughout the rev-range. An absolute gem of an engine!

With all the evident changes in the new engine, does the new Aviator HET validate Honda’s dream mileage of 60 kpl? Talking of numbers, the Aviator was subjected to a test run of close to 300 km that included peak hour traffic, two up riding and extended high speed bursts. It’s hard to remember if we rode the Aviator anywhere near the economy style and even with the cruel hospitality meted out to the stylish Honda, it reciprocated with surprising figures of 54 kilometers to a litre. Honda seems to have got its claim right. The difference in their claim and our figures can be equalized or even surpassed with a sedate style of riding. 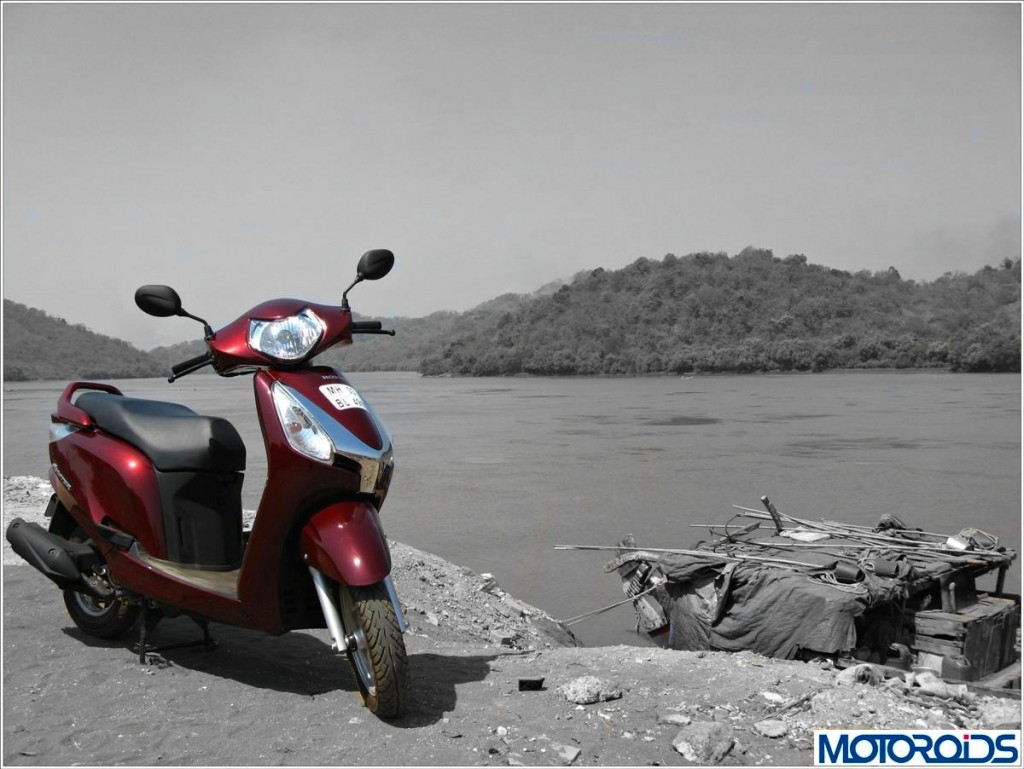 If you are on a lookout for a convenient and efficient scoot to tackle your routine commuting chores and somehow find the Activa too girlish and the funky Dio a bit odd for your liking, the new Honda Aviator HET deserves a serious thought. An urbane scoot built around a near indestructible engine and now sporting a new efficiency tag around its neck, the Aviator seeks your attention for ownership with a premise that you’d never regret your decision of having bought one.