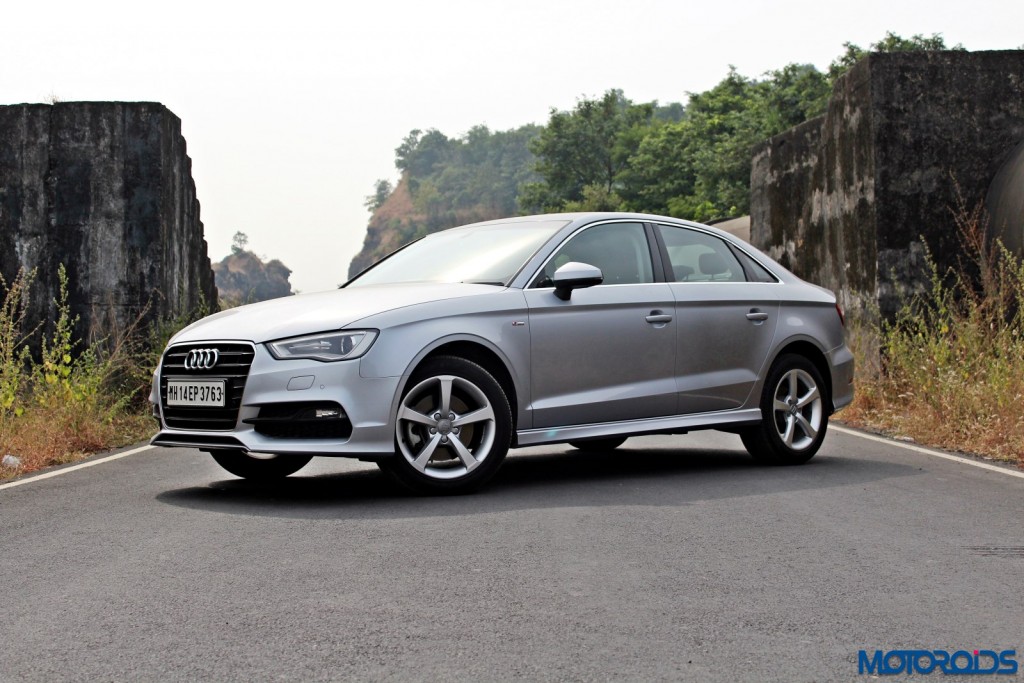 The Audi A3 hasn’t left much doubt about which entry level premium car is the one to go for in the Indian context. A popular three box design, along with the World Car of the Year Award (2014) behind it, it’s the most balanced choice for someone willing to have a premium German badge on his reasonably priced ride. We did an exhaustive road test review of the car before its launch in India, and came away impressed with the package. In September 2015, Audi quickly updated its still minty fresh A3 petrol to celebrate its anniversary with some nifty new feature additions. We thought it would be worthwhile to update our readers about the changes incorporated. So here goes

So what are the changes on the new version? 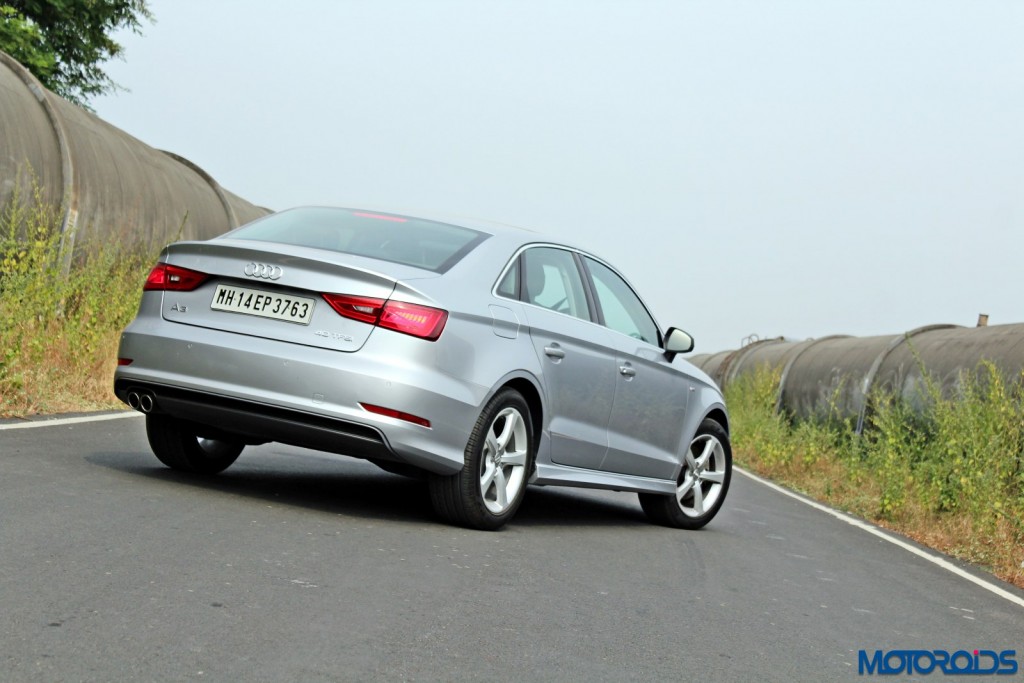 On the outside, Audi has endowed the new version with a new style for the alloy wheels. The new boots for the car now feature 15 spoke cast aluminium alloys in a Y design. Our test car came fitted with even more special 17 inch, 5 spoke alloys though. Electrically adjustable exterior mirrors, new Halogen lamps and Light/ Rain Sensor are a few more additions. The car is also available with a High Gloss Package on the new model which adds piano black to the car’s exterior in certain places. 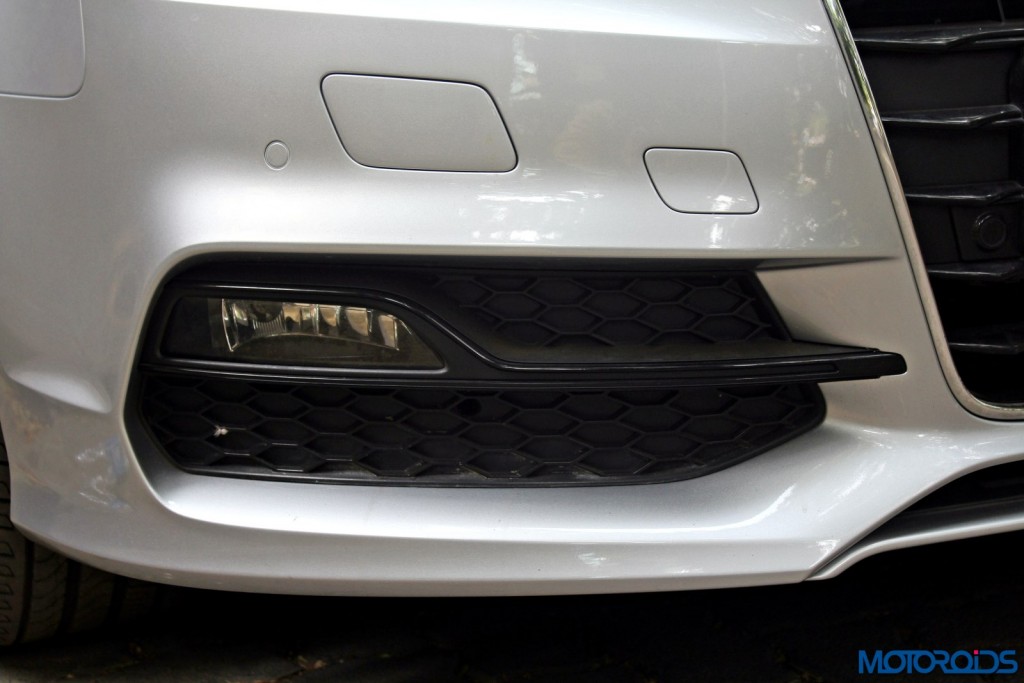 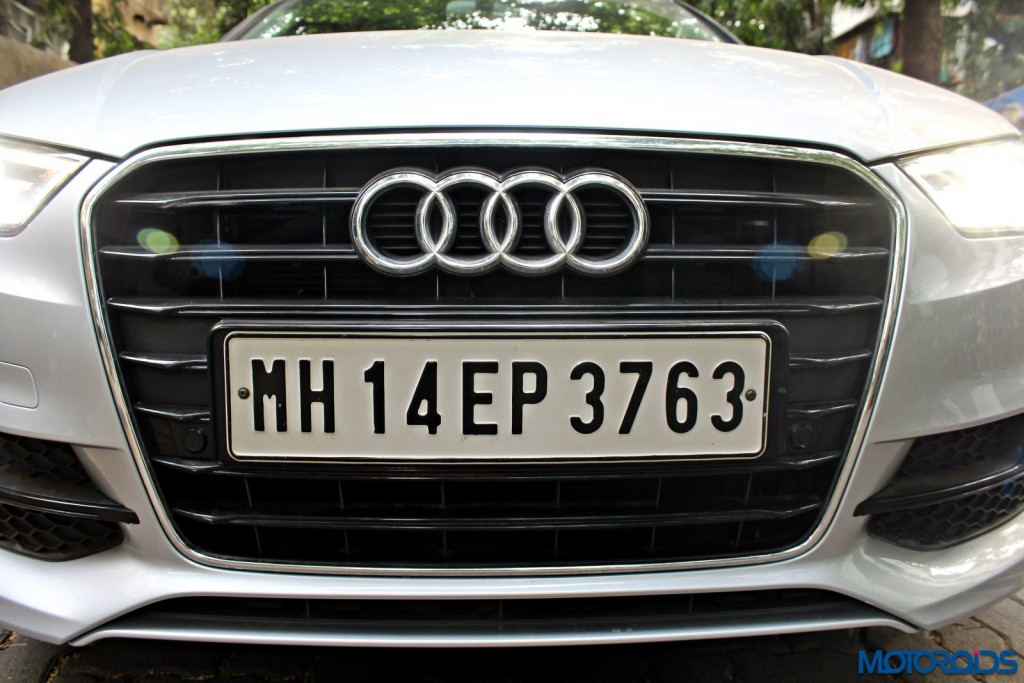 On the inside, the minimalistic, yet hi-quality cabin gets a slew of refreshes and new features. The four-spoke multifunction leather steering wheel is new, along with fresh new chrome highlights to add some lively contrast to the interior. There are new translucent, snake-scale like inlays on the dash as well as on the doors. Floor mats at front and rear are now done in Regatta leatherette – fabric upholstery. 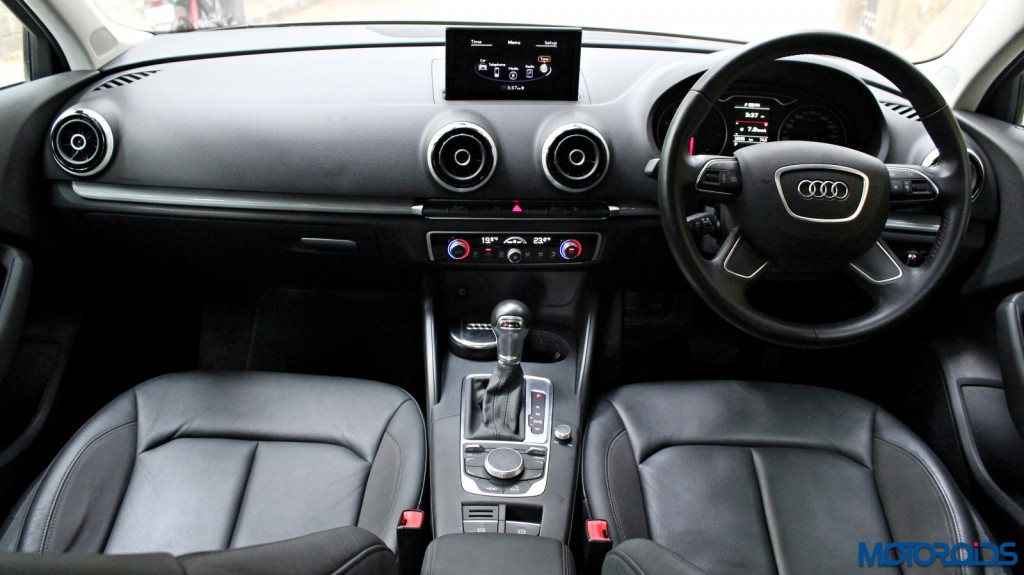 For the top of the tree S-Line trim, the new A3 gets door sill trims with S line logo and illuminated vanity mirrors. 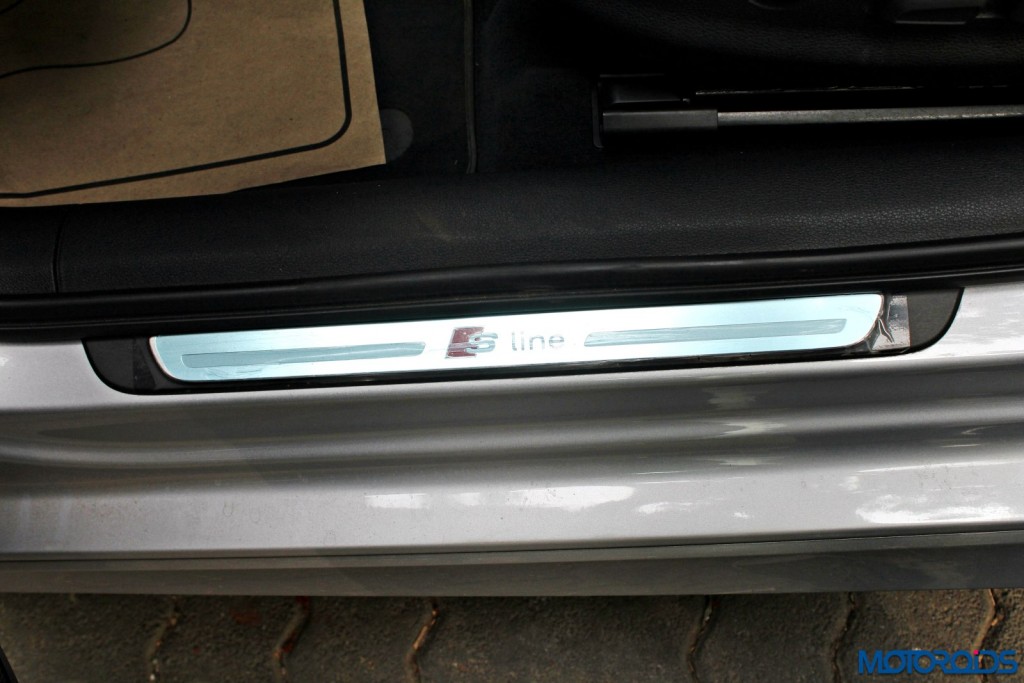 On the outside, the S-Line trim receives front fog light surrounds and radiator grille in piano black and S-line badges on the front fender. The S-line also gets some exclusive bits on the body such as the S-line specific front bumper, rear diffuser with platinum grey insert and side sills. 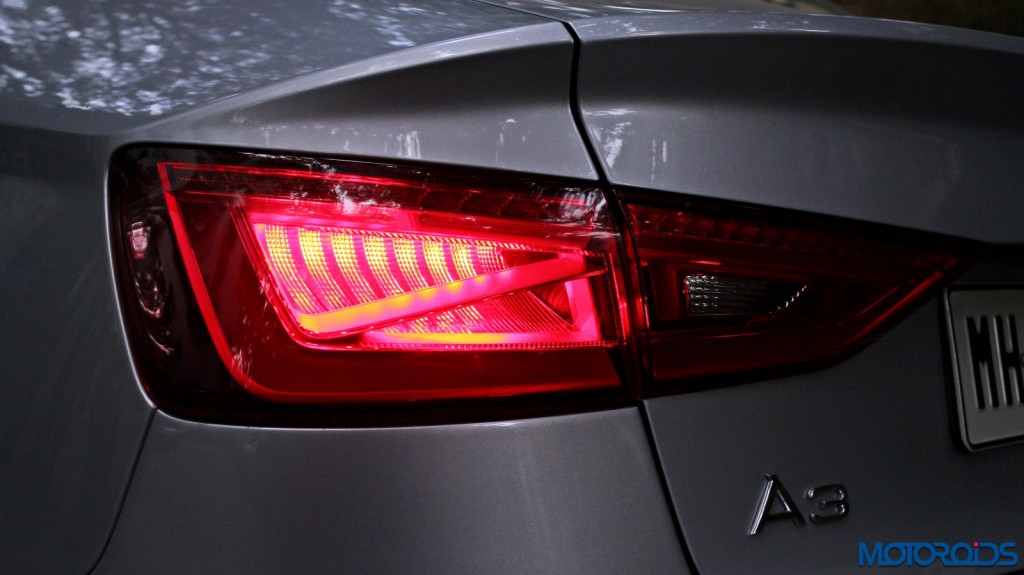 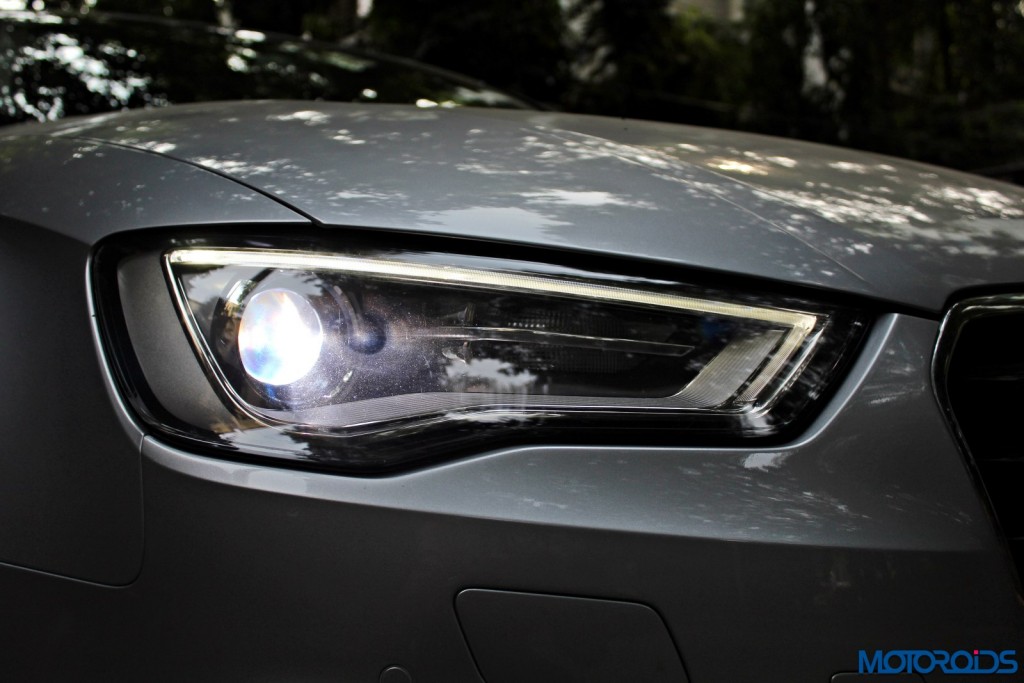 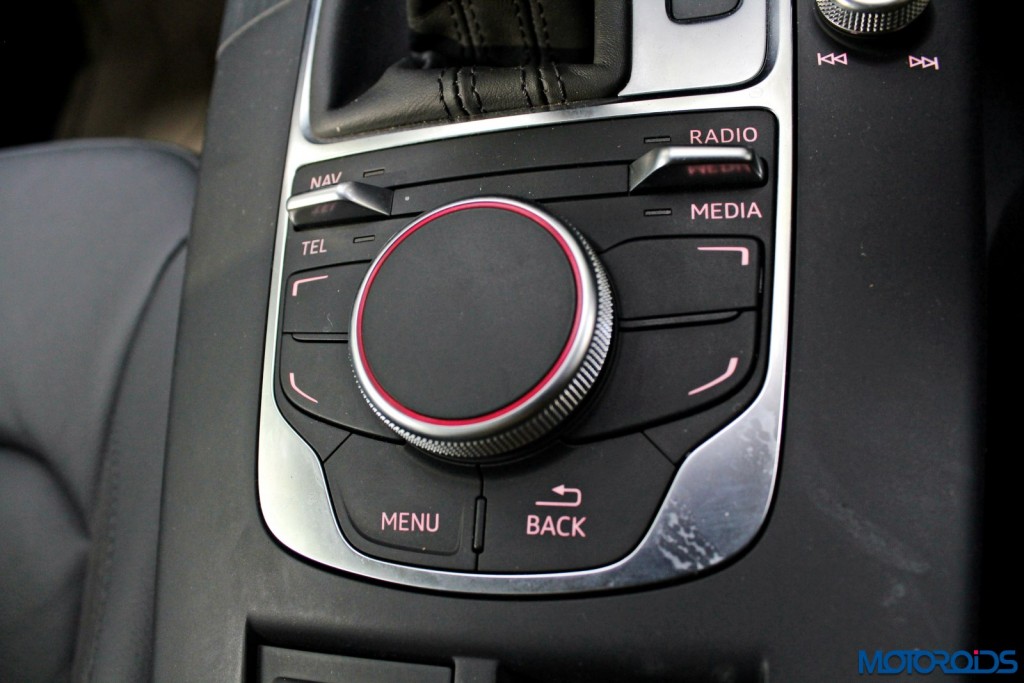 Audi has also upgraded the infotainment system with the new MMI Radio version. Other enhancements include the Audi music interface, Bluetooth interface and Passive Speakers. Also new as a convenience feature is the rear parking aid. The car comes equipped with automatic two-zone air conditioning with sun sensor and rear AC vents.

Have any changes been made to the powertrain / mechanicals?

None. The A3 petrol continues to draw power from the exceptional 1.8 litre turbo petrol that we also sampled in the delightful A3 Cabriolet a few months back. Badged 40TFSI in the petrol version, the A3 has a peak power output of 180 bhp at 5100 rpm and 250 Nm of impressive torque delivered at an ultra low 1200 RPM. 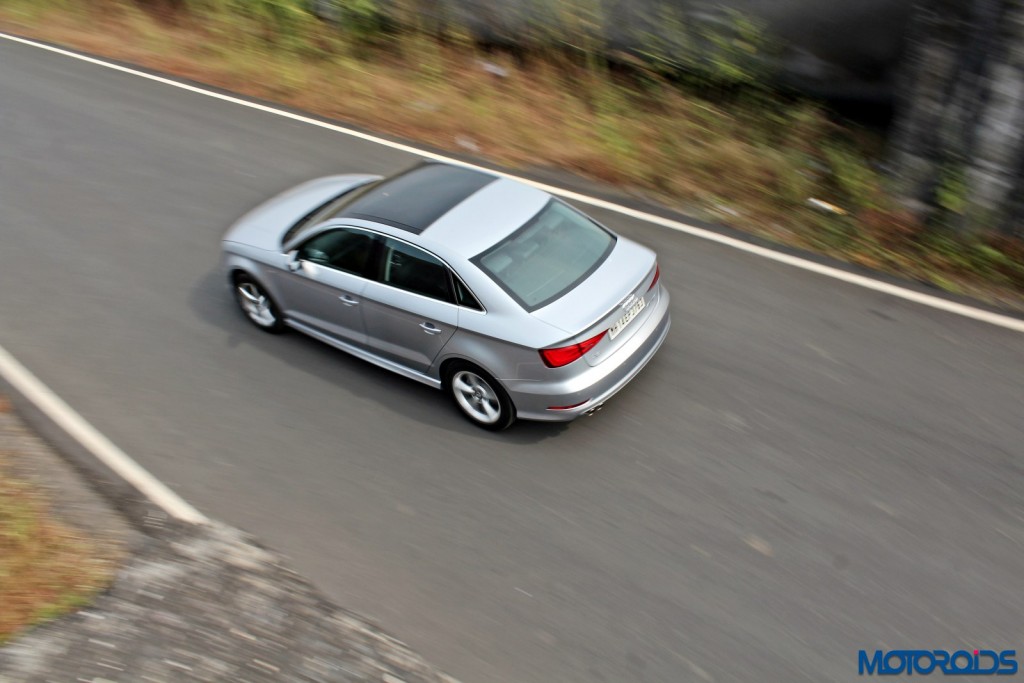 Performance-wise, that engine is an absolute gem for the class; and despite its relatively small size, has the capability to genuinely thrill and excite. Despite being a turbocharged unit, the response even at the lower revs is positive, though one can easily experience the turbo getting charged up at 2000 revs and feel a distinct surge in torque thereafter. None of this can ever be a bother though, as the capable auto transmission is at work swapping ratios for you. Performance is strong throughout the rev-range, all the way up to the 6500 rpm redline. That turbo motor is extremely smooth, revvy and has a somewhat muffled sporty note to it. It doesn’t resist being abused, and you can actually bury that right pedal without feeling guilty as you do while working those gruff, lazy, heavy footed engines. 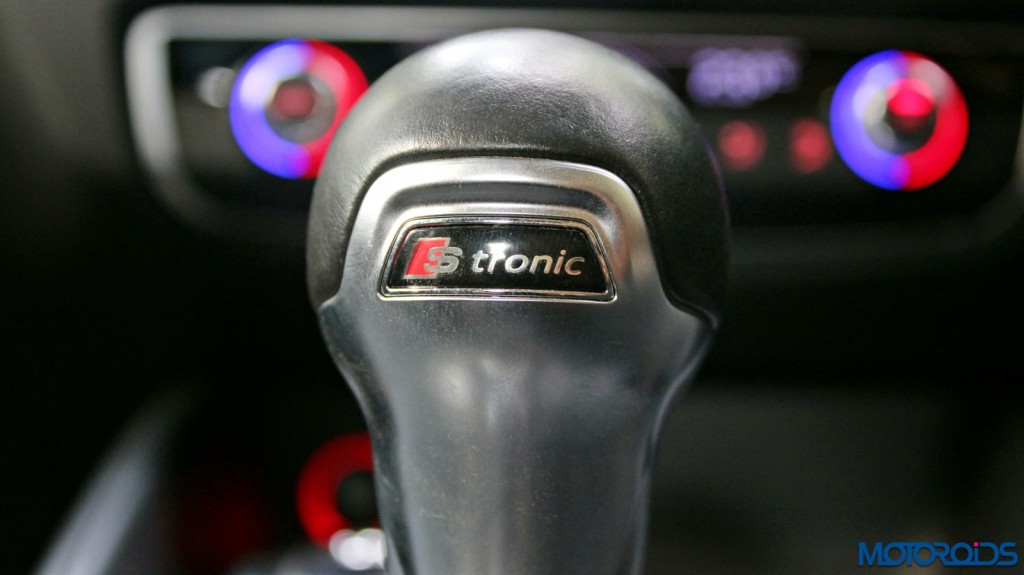 Playing its part equally well in complementing that beautiful engine with lightening fast shifts is the seven speed dual clutch S-tronic auto box which, simply put, is the gold standard in the business for others to emulate. We cannot describe enough the delectable fusion of this engine tranny combo. It proves in practice that fast, fun, peppy cars don’t necessarily need to be propelled by fuel hungry V6 or V8 monsters. The sub-8 seconds 0-100 km/h sprint time of the car bears testimony proves the theory, while the ARAI certified efficiency of 16.6 kmpl substantiates it. During our 100-odd kilometre long run, we managed to extract a little over 10kmpl, with a substantial part of the drive comprising spirited driving. 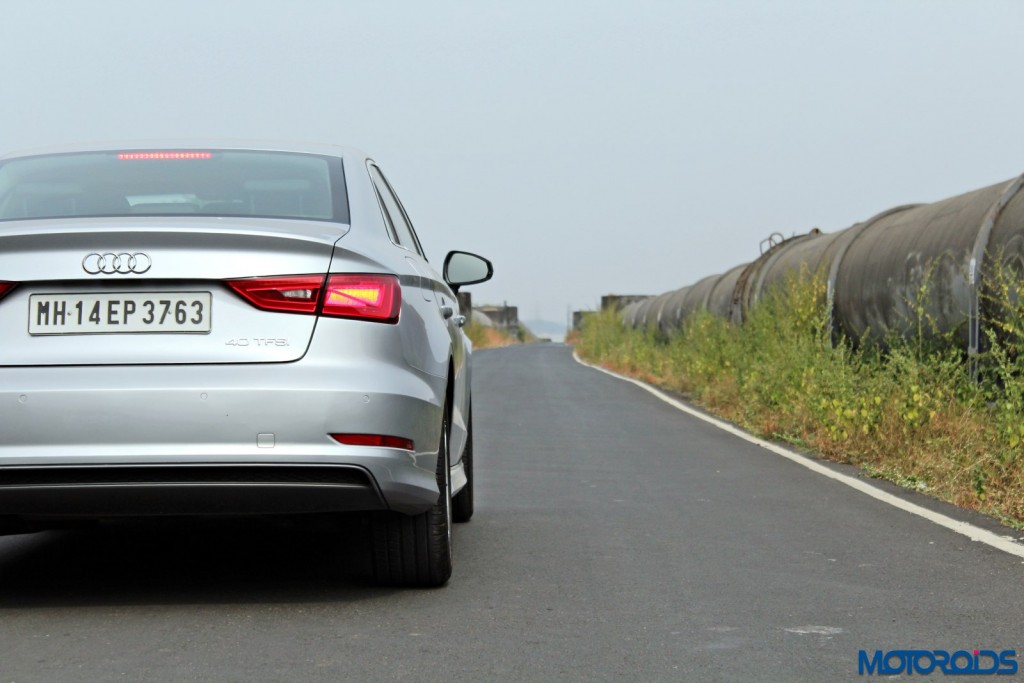 As sublime as the engine-transmission duo is the ride-handling package which has been unequivocally lauded by the Indian and international auto media for its surprising versatility. The balance between comfort and handling prowess on this one is awe-inspiring, and has to be experienced to be believed. The A3, despite being a front wheel driven car doesn’t have any vices associated with a FWD layout. Only the blokes at Audi know how they have pulled it off.

Beyond a question! So while the BMW 1-series is for the quintessential driving enthusiast, and the A-Class for those in vogue, the A3 is a well-rounded, three-box offering that should appeal to the widest audience in the segment. There really aren’t any negatives with this one, except for a slightly tight back bench, which is still better than the rivals. There really isn’t any real substitute to the A3 if a well-priced entry level premium sedan is what you’re fishing for. Oh, and you’ll get a reasonably sporty driver’s car as a bonus.