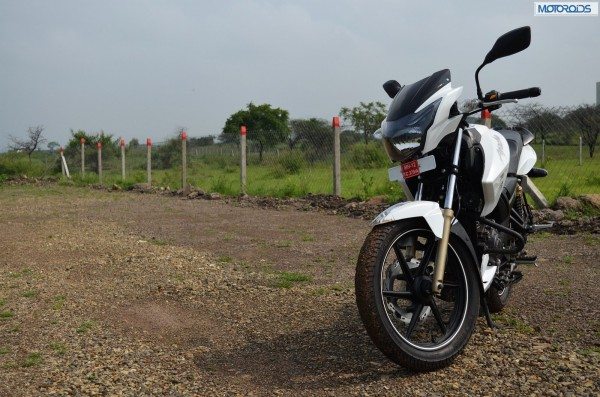 TVS Motor Company is one of the very few manufacturers in Indian biking scene which have made it a point to try and please the performance bike aficionados. The erstwhile TVS-Suzuki relationship saw the advent of some really exciting machines such as the Suzuki Shogun and the Suzuki Fiero. In 2007, several years after the two manufacturers parted ways, TVS launched its second 4 stroke, 150cc model- the Apache. Initially regarded by many as a Fiero with new clothes and a 5 speed gearbox, the new motorcycle was quick to create a niche for itself and was seen giving quite some sleepless nights to the makers of formidable Pulsar 150. 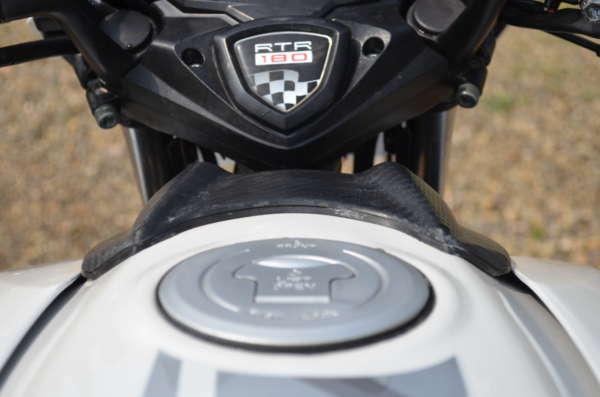 Soon after, the TVS Apache 150 was replaced by the 160cc variant and in came the Racing Throttle Response (RTR) moniker. With the advent of the RTR 160, the Apache became the first bike in its segment to boast of bits like a petal disc, clip ons, a 0-60kmph read out, et al. In later stages, the bike also got tank shrouds, new decals, a Fuel Injected engine variant and other tid bits such as an engine cowl.

It was in later half of 2009 when the South India based automaker decided to take the fight straight to the bigger Pulsars and came up with the Apache RTR 180. The 180cc variant was quick to garner attention of the excitement-deprived crowd in the sub 200cc segment of Indian bike market and suddenly, found itself being compared with bikes from even a segment above.

Some four years down the line, the Apache series of motorcycles got its most comprehensive makeover ever and in came a host of restyled body panels, along with bits like DRLs, to infuse some freshness into the fast ageing bike.

Recently, we spent some days with the new 2013 TVS Apache RTR 180 and tried to figure out if the flagship TVS, complete with a fresh new face, is sufficiently potent in this day and age to bring out the kid in us. 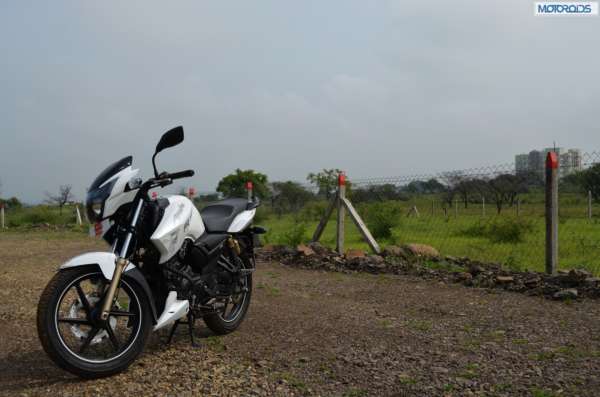 Park the 2013 Apache with the pre-facelift model and you would struggle to find even a single shared panel between the two bikes. However, worth mentioning here is that the design of the new Apache is more evolutionary than revolutionary. There is no mistaking the bike for anything but an Apache and the designers at TVS have done a good job with bestowing the bike with a higher visual appeal, without really giving it an altogether new identity. 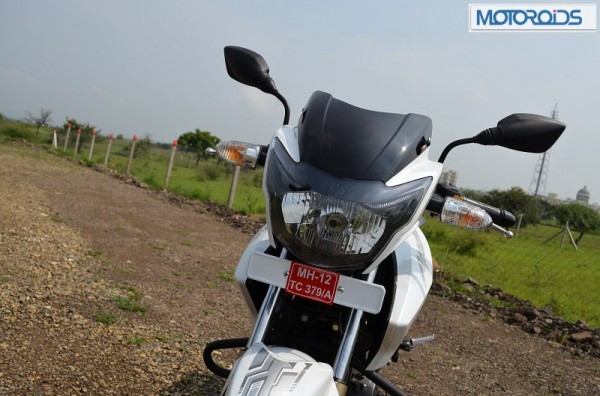 The talking point of the refreshed Apache has to be its all new bikini fairing. The bike comes with a rather bulbous front fairing and opinions seem to be divided on the new fascia’s appeal. While there are many who feel that the chunky headlamp, coupled with DRLs and a steeply rakish fly screen, endows the bike with some newfound aggression, there are others who feel that the manufacturer has gone overboard and the styling of the new fairing is just too loud for its own good. We, however, believe that the front fascia’s styling is such that it grows on you with time and we certainly don’t feel that the new fairing robs the Apache of its visual appeal. 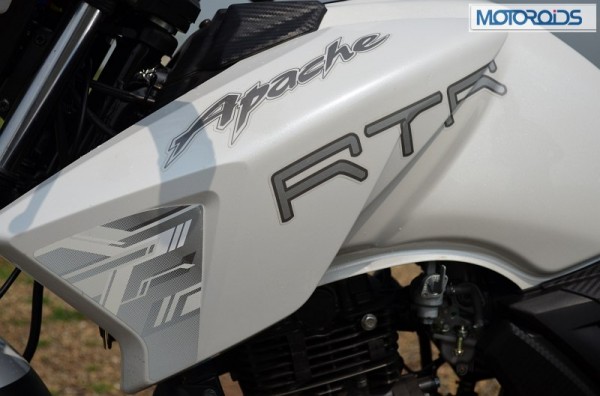 In profile, quick to catch attention are the larger tank scoops. The engine cowl and the tank scoops have not just grown in size but have also become edgier. While the earlier bike’s tank shrouds merged more neatly with the tank, the ones on the refreshed bike help in bestowing the front end with some visual mass and the new bike definitely ‘looks’ bigger than its predecessor. The tank is one of the only couple of panels that have been carried over from the pre-facelift model and continues to impress us with its neatly carved out muscles. 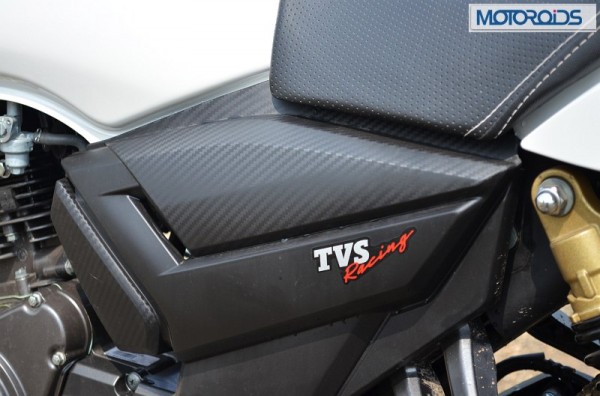 The bike also comes with all new side panels and tailpiece. While the side panels are a lot less rounder and angular, the black shade of plastic and the TVS Racing sticker help in giving them a distinctive Apache touch. 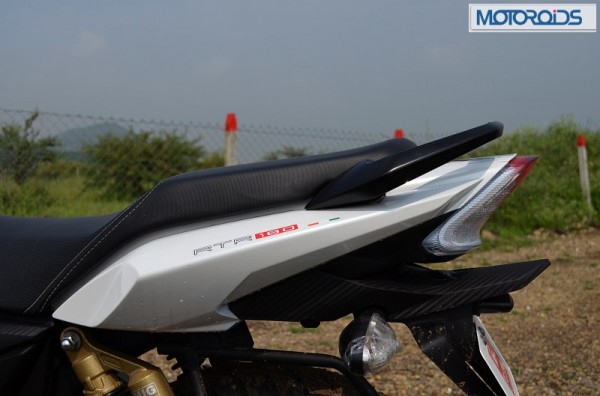 Like we said, the tailpiece is also new and akin to the side panels, is a lot less rounder and far more edgier than the one on the pre-facelift. At the rear end, the tailpiece continues to hold the same old taillamp and boasts of same old split grab rails. Ultimately though, it does manage to make the rear look a lot more sharper, meaner and modern age. When viewed in profile, the new Apache, complete with new panels, muscular fuel tanks, six spoke alloy wheels and a dash of matte gold on certain cycle parts impresses us with its modern and racy looks. 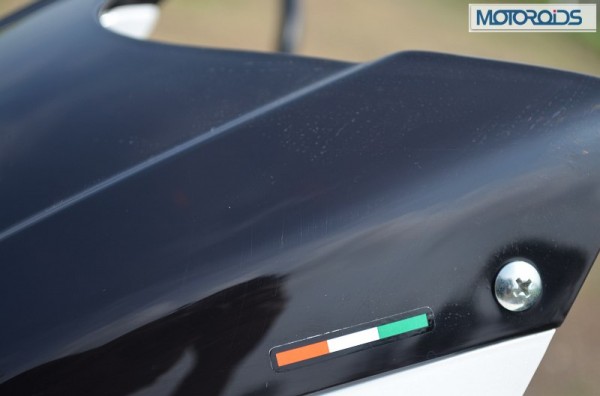 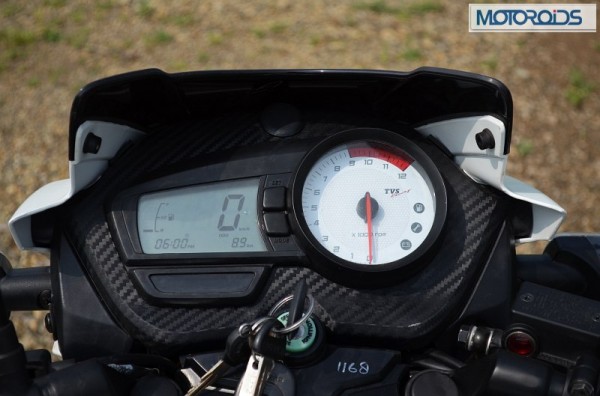 Overall, we have nothing but many great things to say about the way the Apache’s styling has evolved. Sure, the front fairing might not be as per your tastes and the tank shrouds may seem to be an overkill for you but there is no denying that the new Apache looks meaner, fresher and far more dramatic than its predecessor. 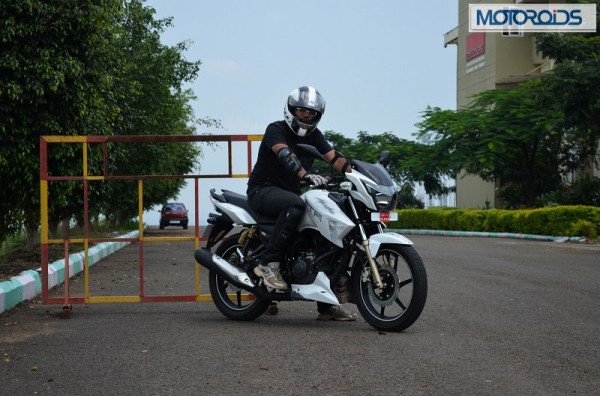 Ergonomically, the 2013 Apache isn’t too different from the bike it has replaced. The rider sits firmly on the supportive seat and the clip-ons, which are two-way adjustable, fall easily to the hands in their factory-set positions. 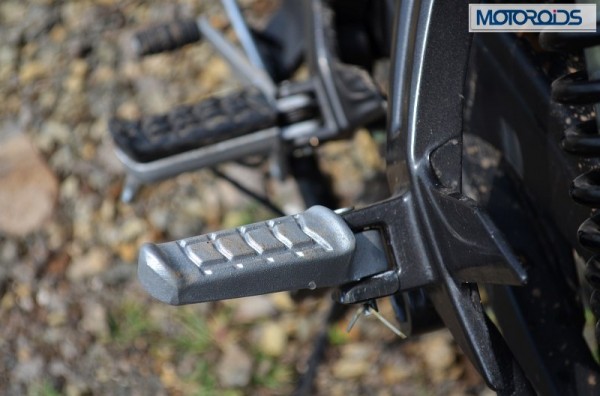 The foot pegs allow for a sporty yet comfortable riding posture

Thanks to the bike’s sporty aspirations, the foot pegs are set a bit towards the rear and while they aren’t really rear-set in a Yamaha R15 style, they definitely offer a sportier riding posture than that on the Bajaj Pulsar 180 UG3. The bike comes with rubberized handlebar grips which offer a firm grip.

The 2013 Apache RTR 180 boasts of a longer wheelbase than both its predecessor and the RTR 160 and this means that unlike on my 2008 RTR 160, the rider and the pillion won’t be found indulged in some impromptu footsie. 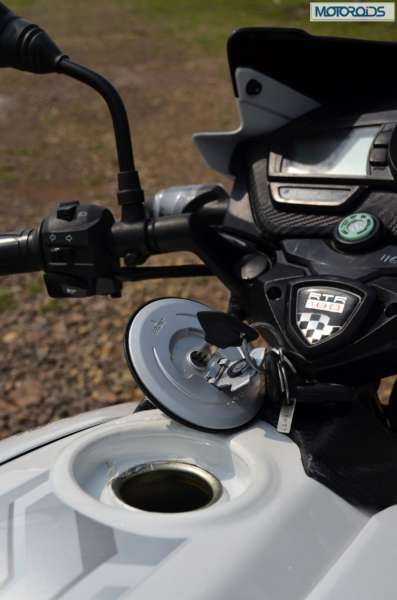 Go to next page to read about Engine Performance 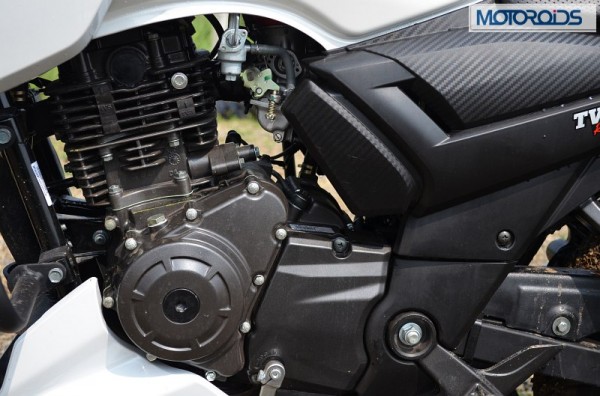 Powering the 2013 TVS Apache RTR 180 is a 177.4cc, single cylinder, four stroke, engine that has a max power of 17.3 bhp @ 8500 RPM. The peak torque is pegged at 1.58 kgm @ 6500 RPM. This engine, in a manner typical of all motors with a short-stroke, loves to rev to the moon and revs freely at that. Such is the performance on offer that the engine always seems to be game for some excitement and pushes the rider to extract every ounce of juice it has on offer.

The Apache RTR 180, thanks to its eager engine and light kerb weight, offers scintillating acceleration and delivers all that performance in a way that suddenly, you start feeling like a teen, all flamboyant and desperate to make a statement. The bike can easily dismiss the 100 kmph figure from standstill in around 15 seconds and boy does that tacho-needle love to dance! The motor loves revving all the way to a tacho indicated 11500 RPM, before crying out for clemency and asking you to shift to next cog. Talking about the gearshifts, the bike comes with a five speed gearbox that boasts of a one-down four-up shift pattern and offers smooth and very accurate shifts. False neutrals are as good as non existent and it is no less than a joy to operate that lever.

The RTR 180 would also not disappoint you during office commutes and offers enough grunt lower down the revs to keep you from having to time and again play with the gears in the stop-go traffic.

I am absolutely floored with the way all those 17 horses go about their business. So badly smitten I am that I have been left wondering why people are all gaga over bikes which are priced at least 20 percent higher and yet, deliver only a little extra in terms of engine performance.

The only reason I have to complain about is the onset of vibrations as the bike nears its rev-limit. Not really a deal breaker, especially if you consider that the vibes are well controlled almost throughout the rev-range and become a bit pronounced at the rear foot pegs only once the tacho-needle approaches the redline.

A really small issue with an otherwise a fantastically awesome performance package.

Vibes or no vibes, an alpha hooligan, that is what this bike is! And did we mention that we managed to extract a little north of 35kmpl, even with all that tormenting of the engine?

Go to next page to read about the Ride, Handling and Braking 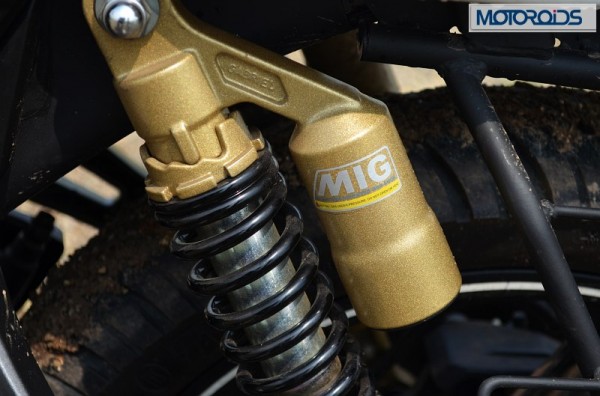 Suspension duties on the 2013 TVS Apache RTR 180 are courtesy telescopic forks up front and a set of gas charged twin shock absorbers at the rear. The bike runs on 17 inch alloy wheels, which come shod with a 90/90/17 spec tyre at front and a 110/80/17 spec rubber at rear.

As can be expected from a bike which claims to have ‘racing’ in its DNA, the RTR 180’s suspension settings are biased towards bestowing the bike with class-leading handling capabilities. The bike offers average-to-decent ride quality and not once did the ride get too unsettling on the broken roads. However, the RTR’s rider isn’t exactly immune to the discomfort from sharp irregularities on the broken tarmac and we believe that the RTR 180 isn’t at all meant to be taken off the roads. We really do not wish to imply that the excellent handling comes at the price of ride quality but we ask you to look elsewhere if plush ride is your sole requirement. 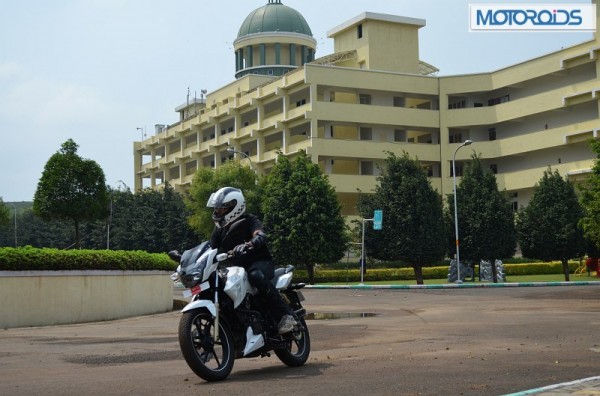 Speaking of handling characteristics, the Apache RTR 180 scores pretty well here. Thanks to its light weight, stiff suspension settings and longer wheelbase, the RTR 180 is a joy to corner. The bike holds its line pretty well in corners and a competent frame and suspension endows the rider with sufficient confidence.The bike is also immensely flick-able in traffic and certainly masters playing the lane-splitter.

We could have easily awarded more marks to the RTR 180 in handling test had it not been shod with a set of TVS Srichakra radial tires. We need to mention here that unlike what some self-styled aspiring bike experts have to say, these tires are far from being dreadful or pathetic. However, the factory fitted set of tires do limit the grip levels in the corner and also fail to inspire high confidence in the rider. A switch to something cost effective yet sporty, like the Michelin Pilot Sporty, is highly recommended! 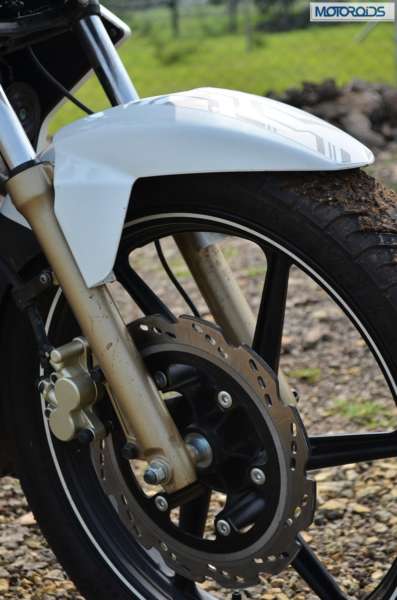 The 2013 TVS Apache RTR 180 comes kitted out with a set of petal disc brakes at the front and rear. The brakes are highly effective and the bike is quick to shed speeds even from triple digit figures. The brakes, even without the optional ABS, do not easily lock and are definitely as eager to perform their duty as that tasty motor!

Go to next page to read about our Verdict 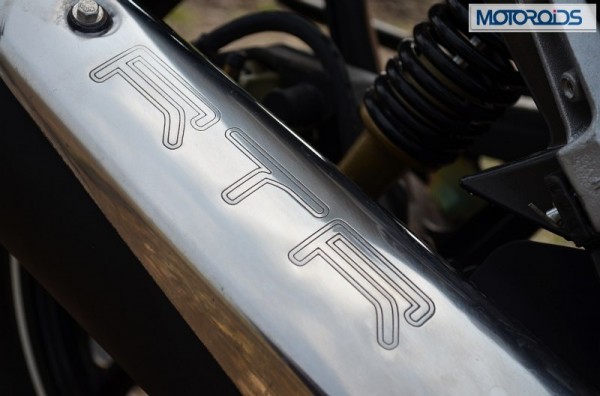 TVS has definitely managed to hit a sweet spot with the new RTR 180. I got so fond of the bike within a matter of few days that it was definitely a pain to let go of her! Plans have already been made to replace my old (but strong) RTR 160 with the 180cc sibling. Blessed with a cracker of a motor, effective brakes, decent ride and handling manners and modern looks, the 2013 TVS Apache comes across as a highly appealing package. Having said that, we do wish the bike came with better tires, maybe a softer suspension setup and less vibrations but then, we have always been a demanding lot.

Without beating around the bush any longer, I would like to conclude that it really is time to grab your cheque book and head to the nearest TVS dealership if a stylish, fun loving and affordable mo’bike is what you’ve been looking for.