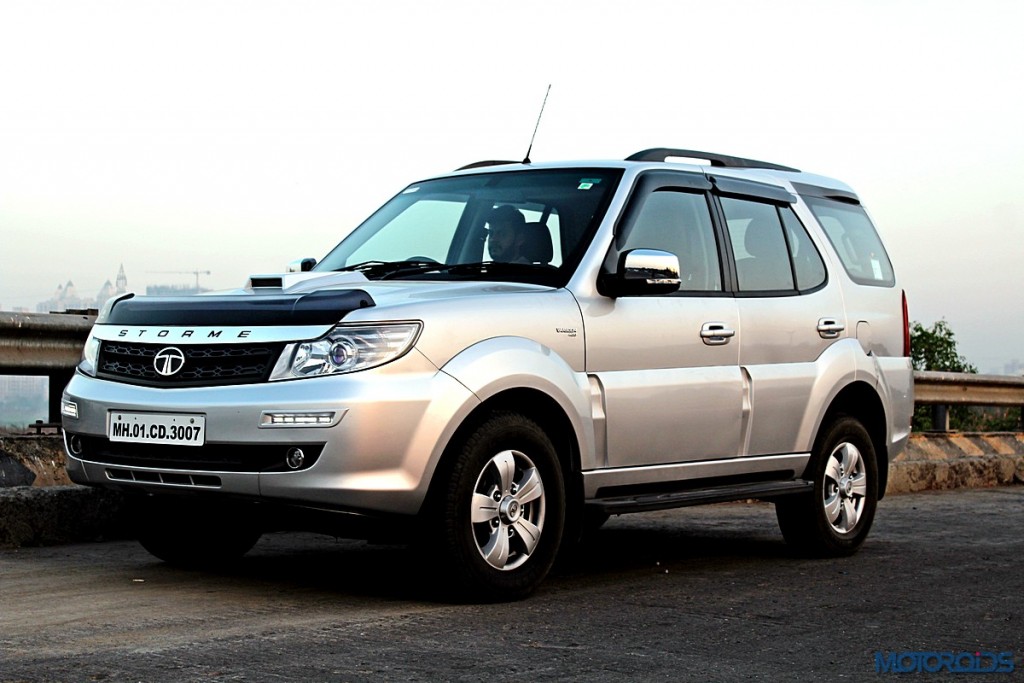 I would go out on a limb and say that the Tata Safari is kind of a hero vehicle for me. But heroes grow old, and so has the big Tata. Foliage has turned into big, creaking, oak trees and streams somewhere have dried up, giving way to scathing deserts with hissing rattle snakes. But the Safari, the Safari still ploughs on.

After countless updates and at least three to four face-lifts (I slept in math classes), the latest in line merely gives us an updated drive-train. But here’s the thing – it’s the most powerful Tata Safari to have rolled off the groaning production lines. Excited, we take the keys and embark on an unplanned, 500 km all-night jaunt through Maharastra’s scenic, undulating landscapes, a clear sky full of stars and a full moon making things more cinematic.

Nothing, apart from a set of LED daytime running lamps engraved in the front bumper, which is also optional, we hear. Oh, and if you’re in the mood, you can also specify a Tata branded, translucent bonnet guard that’ll ultimately become a exhibit that showcases dead leaves. If you’re especially nutty, there’s also a hood scoop on offer, which must’ve been designed by a kid starting his days with Rhino 3D. It’s also as fake as Kim Kardashian’s bottom. Move around the sides, and there’s a new Varicor 400 badge on the flanks. 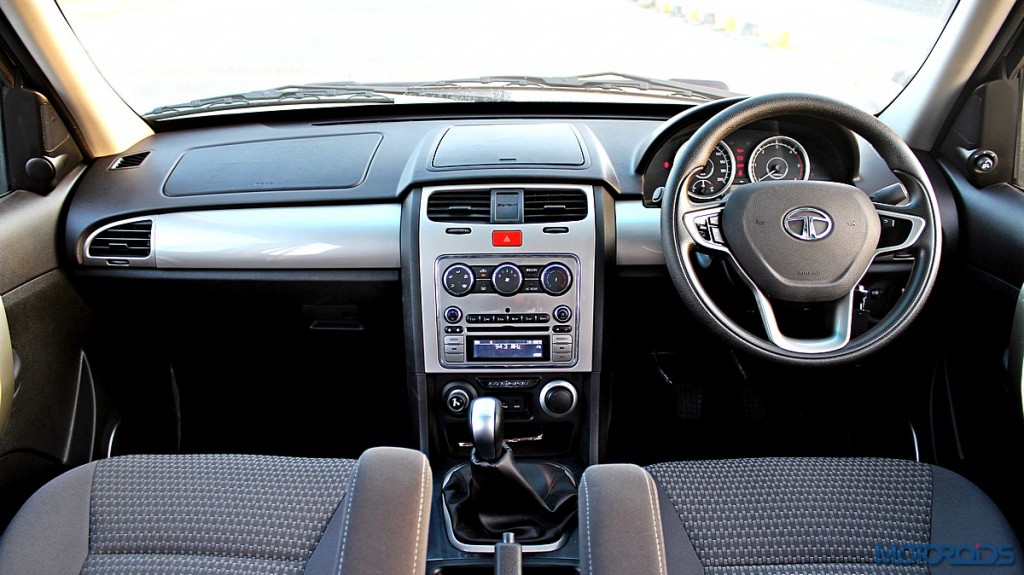 Climb inside, and the hall like interiors exude a familiar charm. The tall seating position, the commanding view of the road is all a part of the Safari package that I quite happen to like. It’s one of the few passenger vehicles in the country which offers a full view of the bonnet’s whereabouts, making the leviathan negotiate space crunches like a cruise liner through busy waters. The seats are supremely comfortable and large, while the…if you’re here to read about the boring stuff, then head here for exhaustive reports – 2015 Tata Safari Storme 4×4 Review : Seasoned Warrior 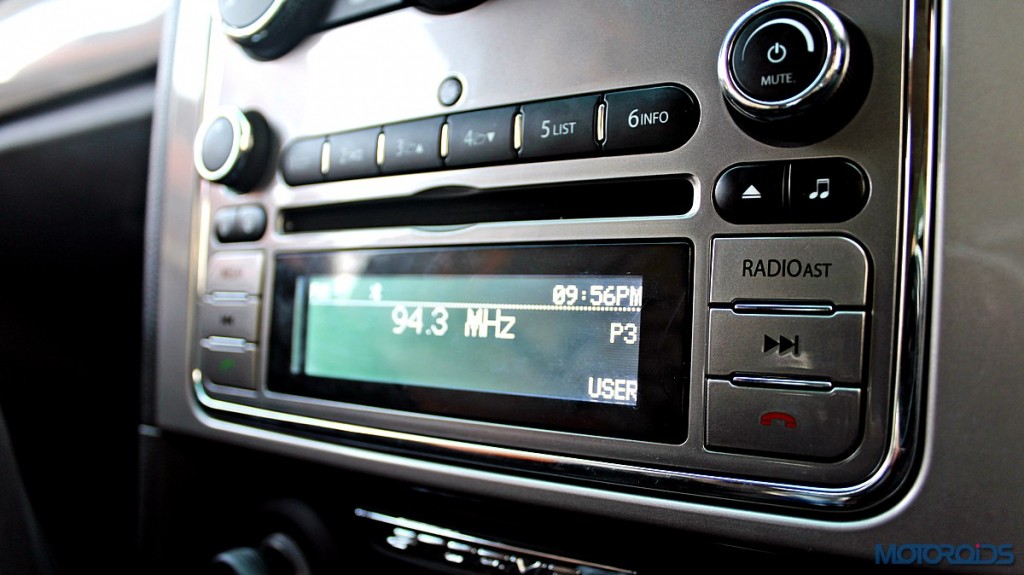 The VARICOR 400 version’s insides continue unchanged, apart from a new, integrated, CONNECTNEXT system with 6-speaker surround sound by Harman. The controls for the system are mounted on the new multifunction steering wheel, which has been used way too often; Tata has abused it. Maybe they should pay their designers an extra buck, and get different steering designs for every vehicle. I mean, it looks good and all, but finding the same steering everywhere is getting on my nerves now.  Audio quality of the new system is definitely better, but still not a patch on the Zica’s 8-speaker system. 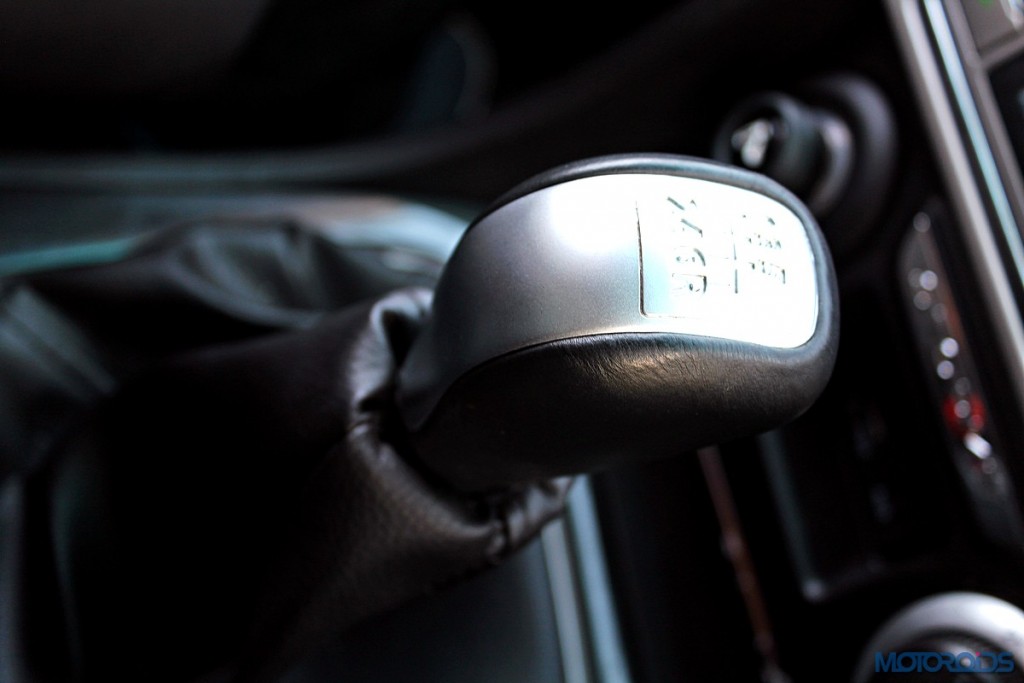 There’s a small TFT display on the system’s matte aluminum finished interface; a far cry from the touch screen interfaces that we’re spoiled with these days. That pint sized display also shows feed from the reverse parking sensors that come standard with the Varicor 400. It works, but the audio and visual effects that come with reversing the vehicle are equivalent to chirpy video games from the last era. Also the gearlever has an extra etching that ends with the numeral 6 – more on that later.

How is the new-found hustle? 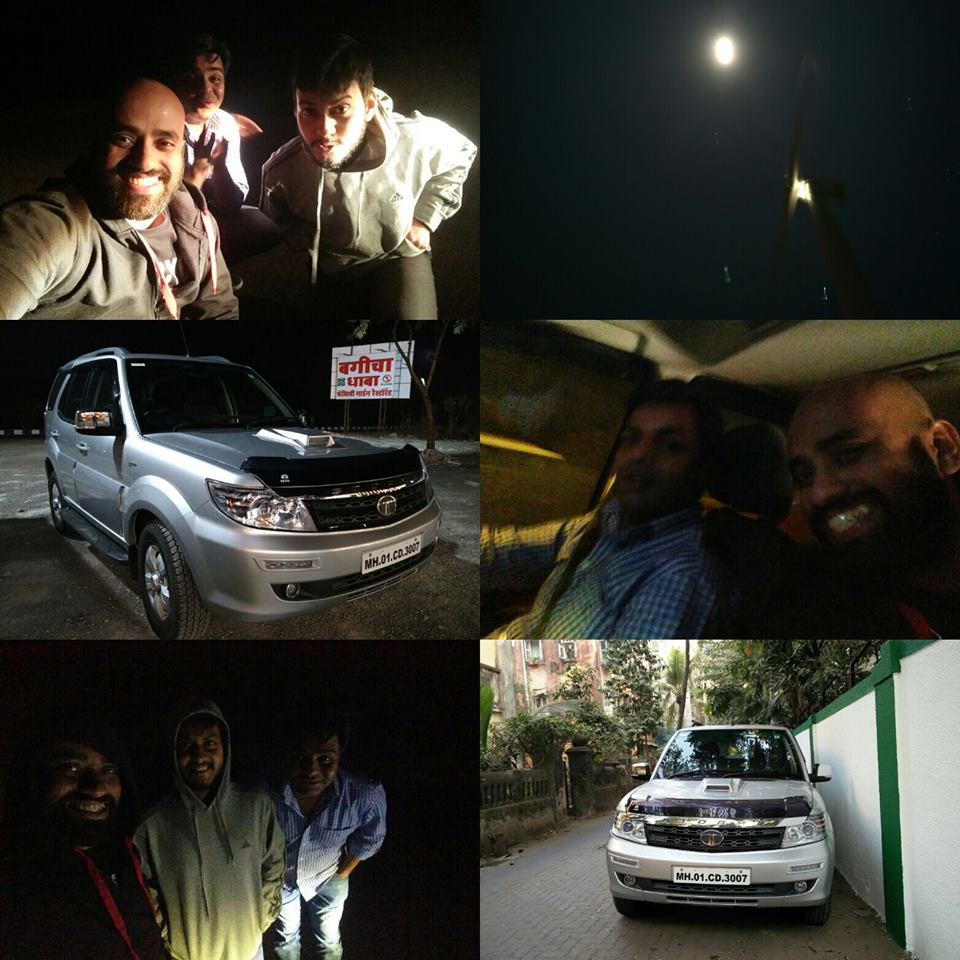 We took the big Tata far out of town on an all-night drive that lasted for exactly 500 Km. Starting from Mumabi, we showed the city light lights of Nasik the slab, armoured sides of the Safari as we careened right towards Igatpuri. Stopping by the giant windmills on a fully moon lit night, and heaving to the massive blades chopping through the air, we tasted wanderlust with the big Tata. Contiuing unplanned, we drove back towards Bhandardara, spectacular during the day, but even the stars and the full moon couldn’t do justice to the beauteous lake in the dead of night. We stood there, till an errant, stray dog barked himself hoarse and shooed us out. 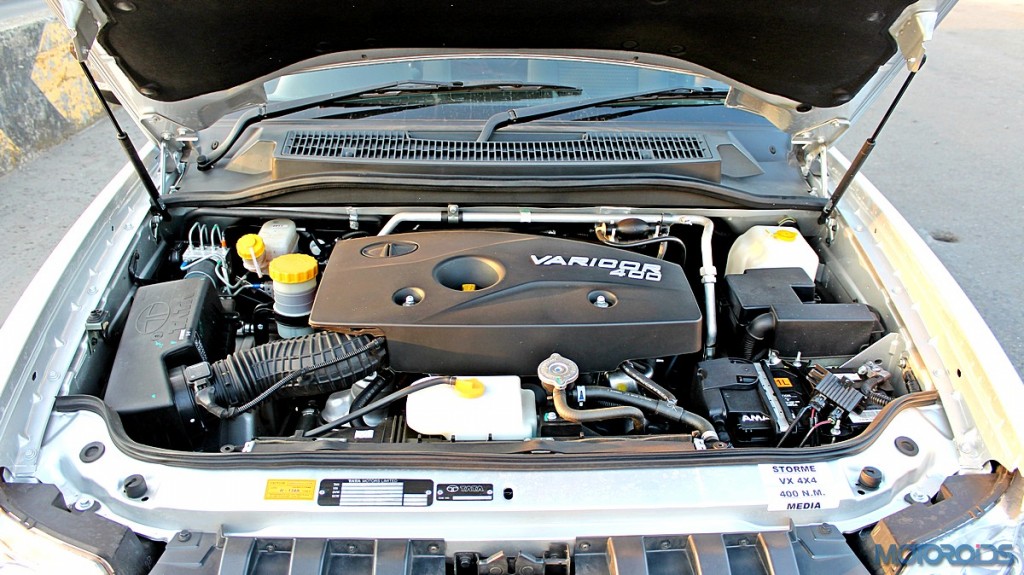 The cylinder block, cylinder head, injectors, pistons, main bearings and turbocharger have been upgraded to deliver the additional performance of the 2.2L VARICOR 400. This is in addition to the recent change to the timing belt system (for all VARICOR engines) which enhanced its service life to 150,000 km. Further, there are changes to the chassis to accommodate the new manual transmission, along with a new engine cover. 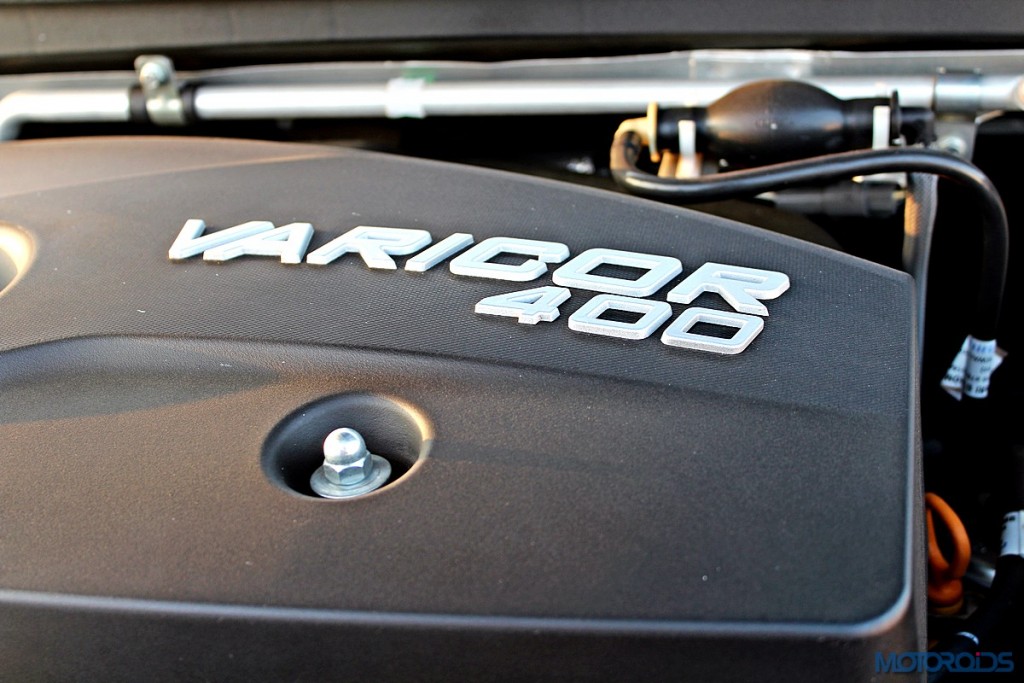 Tata Motors is claiming a 0 – 100 km/hr sprint time of less than 13 seconds for the Safari Storme equipped with the new engine. The carmaker also claims that the NVH levels have been significantly reduced, which we can vouch for. Turn the key and the big, lumbering diesel motor fires up, with an uncanny sense of refinement that the big Tata never bestowed us with. Nothing shook or moved as the vehicle idled, its muted, agricultural beat a mere hair line scratch against the stainless silence of the winter night air, far out of town. In the morning, we found acres of sound dampening hardware plastered against the inner side of the hood, settling our bewilderment. 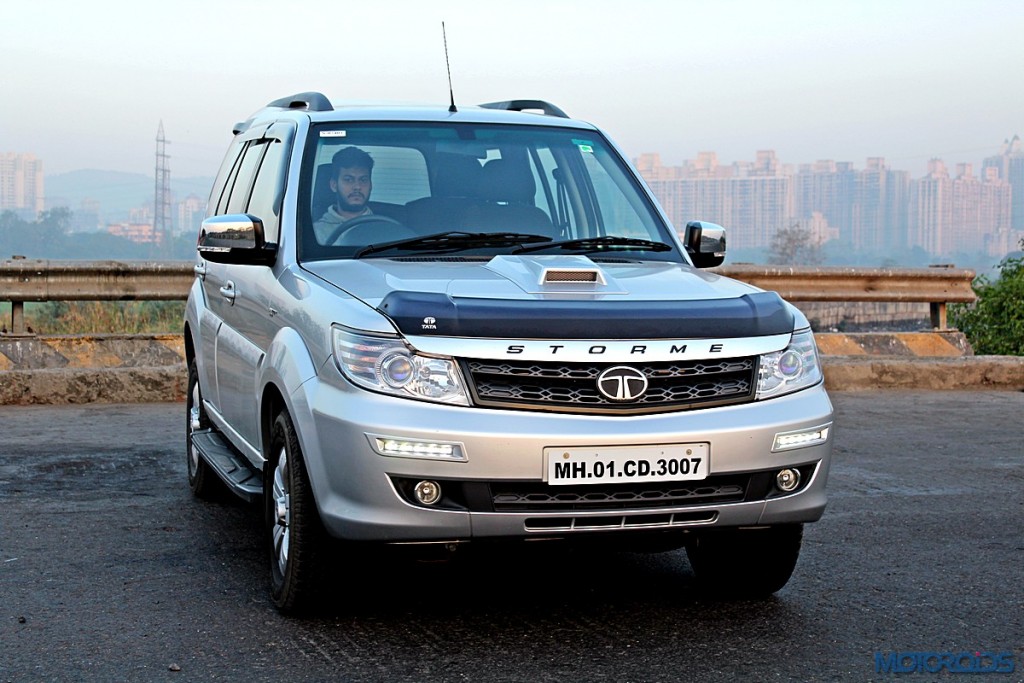 This Safari is all about the added muscle and so I shoved the go-faster from the moment the anchors were dropped. For those of you expecting a shove in the back that gets some viscous liquid called adrenaline flowing through your bodily channels, you’re in for a disappointment. This beast’s updated statistics are more about better drivability, rather than outright kick-in-the-butt performance. In case you’re still wondering, the entire noticeable shove is accumulated towards the upper reaches of the power-band, post 2,500 clicks. As the tachometer needle slowly climbed further, slowly and steadily, new-found legs seemed to appear, and the big Tata started showing its true colors. There came a point in the acceleration’s timeline when you’d know for sure that by now, it’d have left the old Safari for dead. 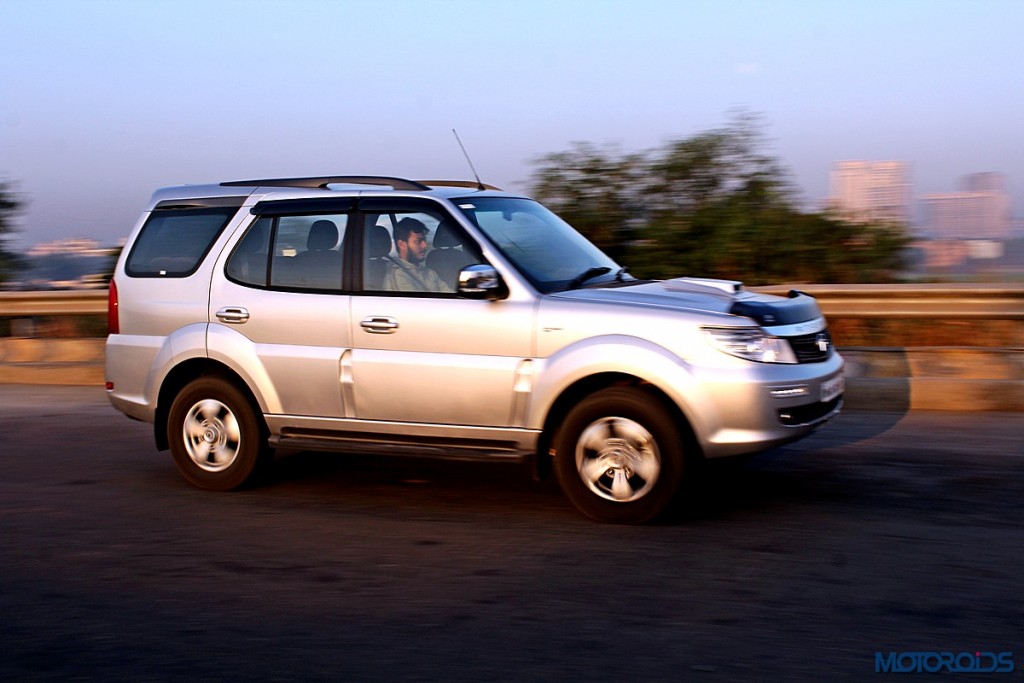 Still, performance comes on steadily at best, just like the older Safari, but instead, there’s just more juice on offer. Back to the drivability part, the big Tata is a very, very pleasurable vehicle to potter around at all legal speeds. In fact, cruising ability has definitely gone up by a few, steep notches, with the VARICOR 400 lazily thumping away below 2,000 clicks, and the speedometer needle just shy of the ton mark. Even the engine with 320 torques is a potent cruiser, but this one is just on a different level altogether, swallowing up the miles with effortless ease. As you would have already figured, in-gear acceleration has also improved significantly, but if you’re craving for sheer punch, look elsewhere, maybe towards the Mahindra XUV500. Of course, there is still turbo lag, but squeezing your way through traffic filled with minions, who respectfully make way for you and your juggernaut, just got easier. There’s a little bit more pulling power available at lower revs, which makes life better. 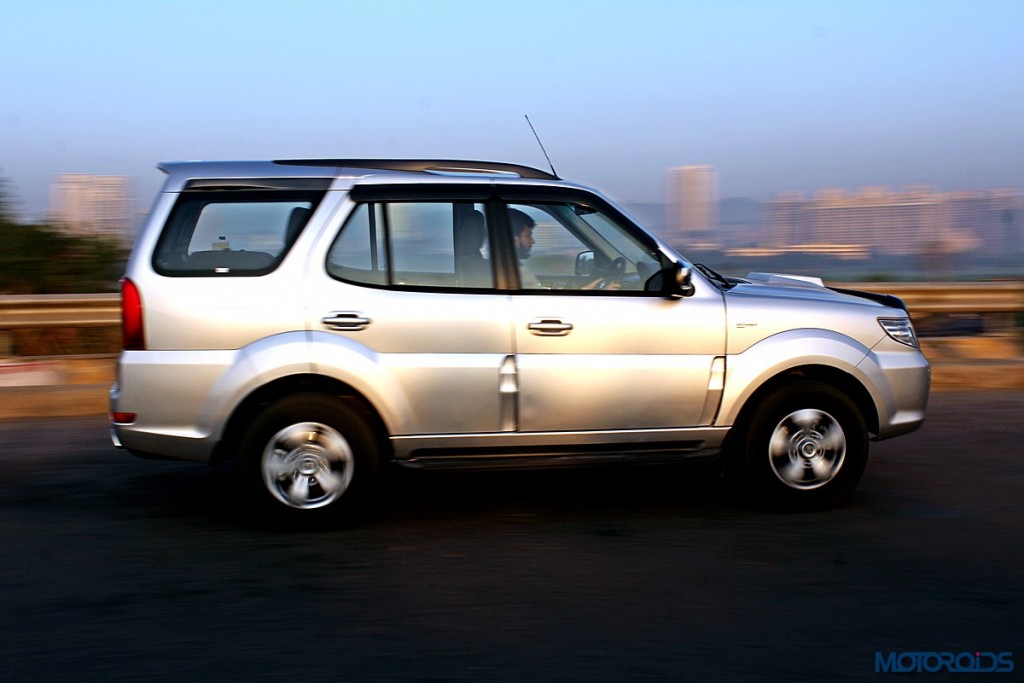 Then there’s the new, six-speed manual transmission, developed in-house and codenamed the G6450. It’s just about alright if you ask me, with rubbery, un-slick shifts that most certainly won’t raise those racer instincts. Goddamn boy, you’re driving a Safari, not a Skyline. But it works fine once you get used to it, especially when it gets a little warm. The new self-adjusting dry clutch, which made its appearance with the Storme face-lift is decent enough, and is fairly light for the vehicle’s capacity, but I didn’t like the slightly long travel. Still it’s easy to find the biting point and lumber off.

The fuel efficiency has been rated at an ARAI figure of 13.9 kmpl. We managed to squeeze 9.1 kmpl after a hard night’s romp.

What about the gait? 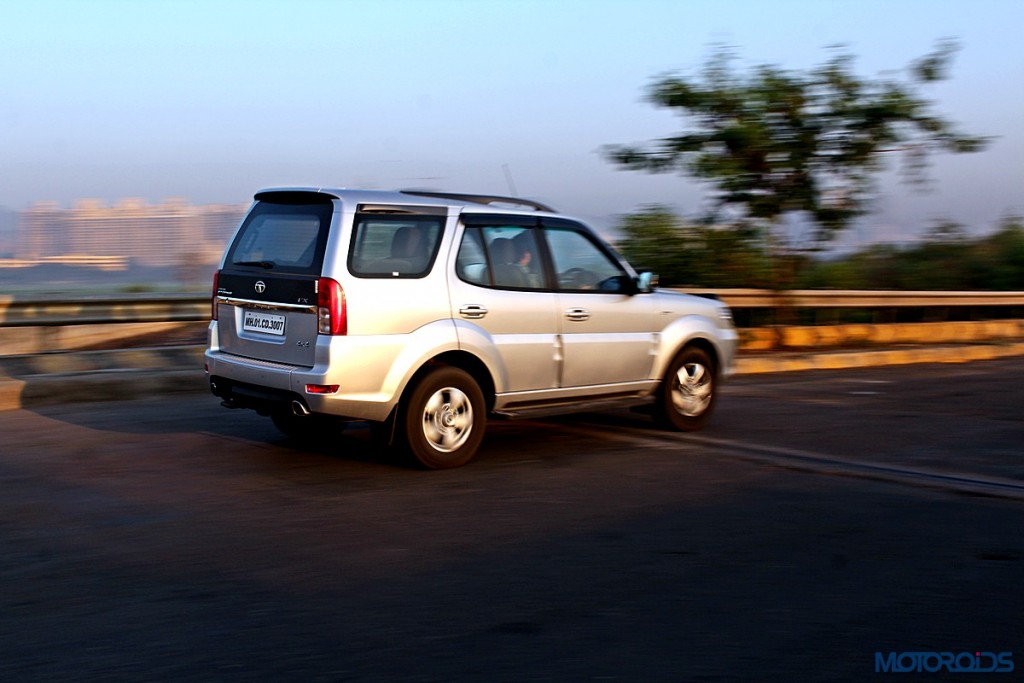 As always, the Safari rides great, its big tires and archaic suspension fighting with the 2080 kg dry weight to offer a plush ride. It wallops potholes and undulations with grace; barely anything filters through the well insulated cabin. Your co-passengers can indulge in a healthy snooze as you gobble up miles at the wheel. It’s just that kind of a thing that the Safari has always excelled in, and the new Varicor 400 just ups the ante. 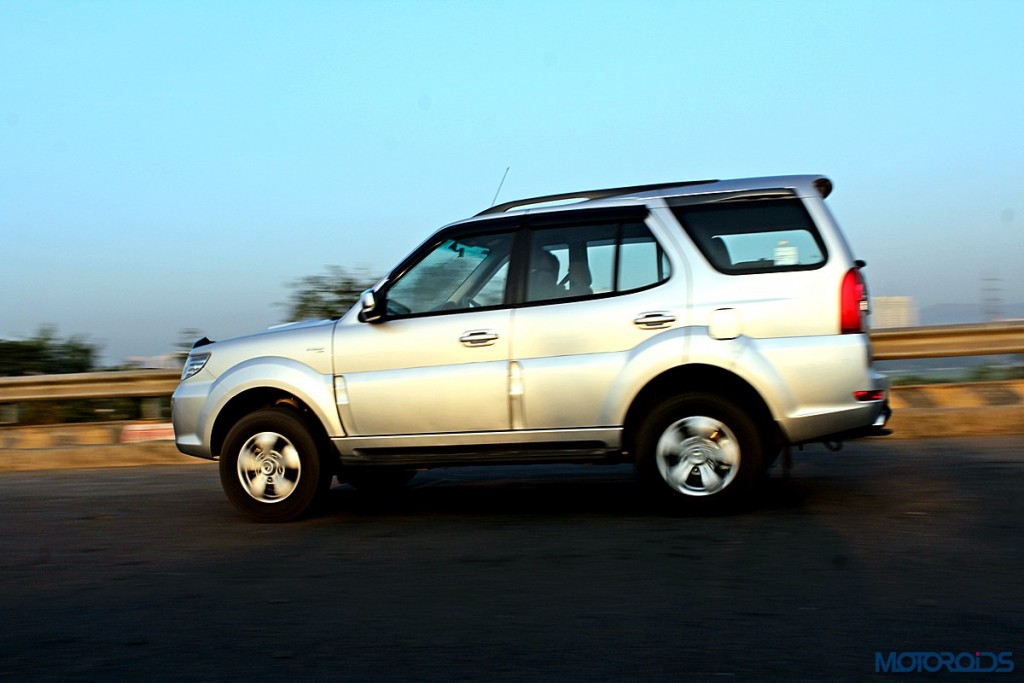 When the corners come however, you brace yourself. The monolith like stance, the ship like weight and the ladder frame chassis all come together to conspire against the big Tata’s gait through the bends. There’s so much body roll that it even stops being funny after a while. It’s not a enthusiastic handler then, no biggie, we already knew that.  Show it some dirt and gravel however, and the big VARICOR 400’s extra torque accounts for some fun-filled, tail happy moments. The 4×4 version, equipped with a shift-on-the fly four-wheel drive system, gets a Limited Slip Differential (LSD) for optimum traction even on slippery surfaces. Off-road credibility is off the charts too, and shows the current crop of soft-roaders how things are done when the going gets telluric. The hardcore stuff is only prevented by the vehicle’s sheer girth and large rear overhang. 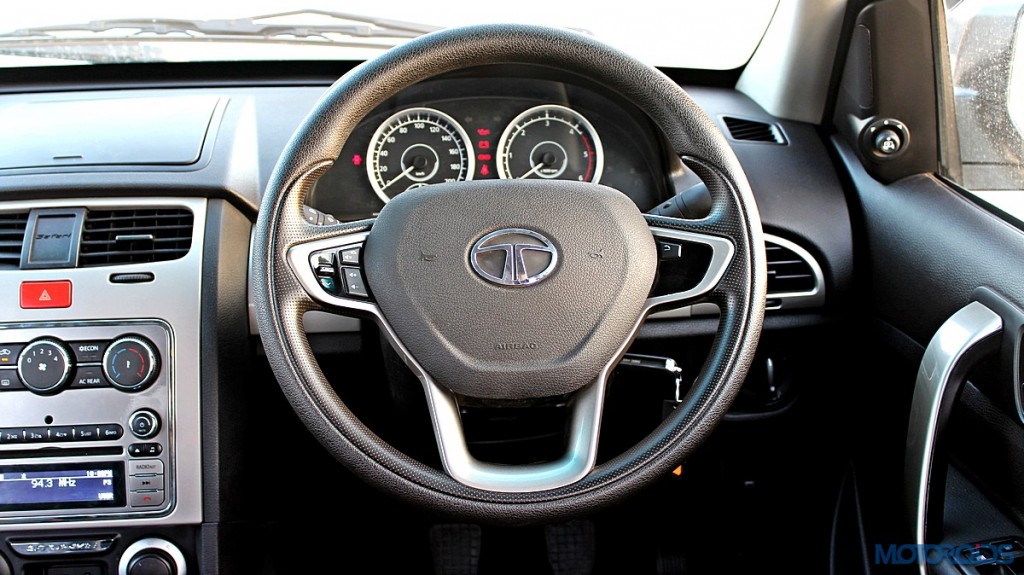 I, for one, love the Safari’s steering setup. Sure, it’s heavier than what the ladies are driving these days, but hard is what you’d expect from a hydraulically assisted rack commanding a couple of fat, 235 section front tires. Still, it’s got honest feedback and plenty of feel; more importantly, it’s not dead off-center. It also weighs up nicely with speed, but the steering rim itself is a killjoy, with its hard plastic laden surface and gravelly texture.

Brakes are good, and the big Tata bobs and pitches as one slams on them, which is eerily funny and enjoyable. Before I start receiving flak for being a perverted auto enthusiast, I shall end this review saying that there’s very good, progressive and confidence inspiring brake pedal feel. 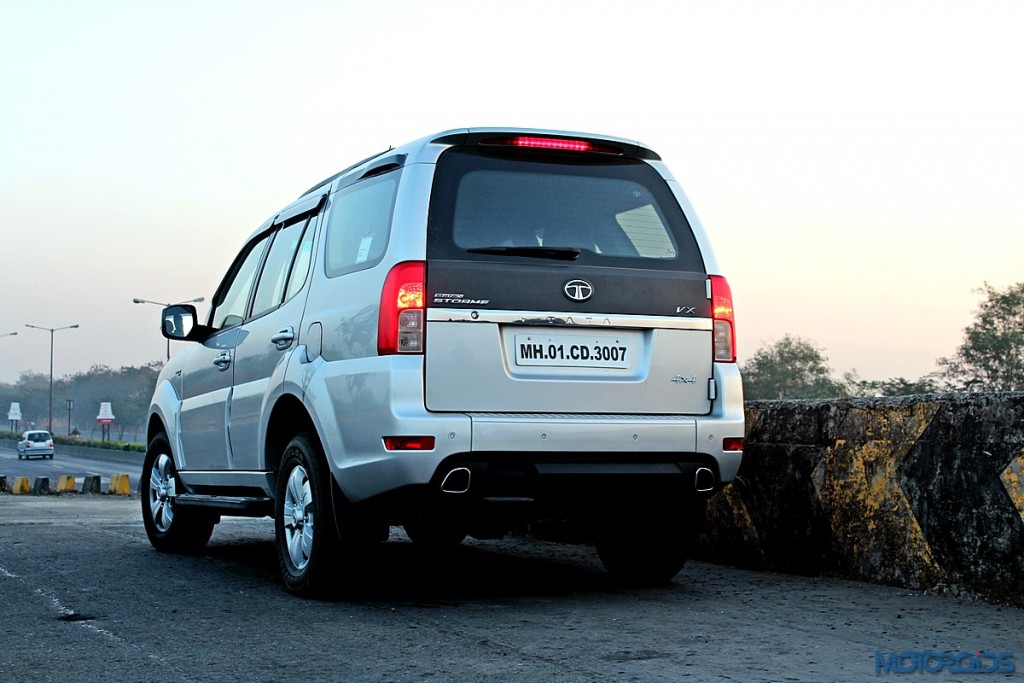 I’d buy it, and I don’t even like old whiskey, and neither I am into older women. It’s just that my creative juices start getting fizzy when old-school vehicles travel into the new age unmolested by the digitized, softened crap that’s flowing on the automotive waters these days – more so, when it happens to be one of my hero vehicles. The Safari is vehemently analogue, and unnervingly brawny, and that’s why I like it.

The new drive-train is a welcome addition, giving the Safari an extra pair of legs. Sure, the new transmission is rubbery, but it makes those legs run. At INR 14,59,952 (ex-showroom New Delhi), the new Tata Safari Strome Varicor 400 merely commands a INR 15,000 premium over the lesser engine, which makes it’s a no-brainer. 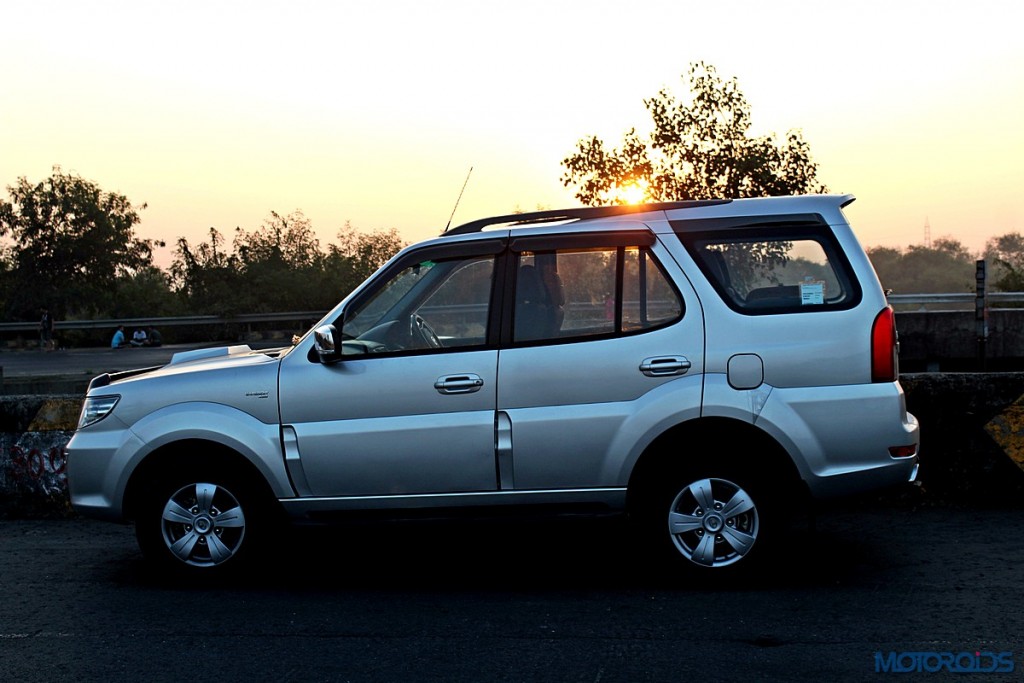 As for features, or the lack of them, I don’t really care much, unless I’m paying quite the sum. I would have loved leather upholstery though, and classier trimming on the insides, along with a healthier audio system. Well, the newbies will scoff at the sheer austerity that the Safari is, but the admirers will respect the mettle. Still, it isn’t winning Tata too many extra customers, but to hell with that.

Here’s the bottom-line – undeniably the best Tata Safari yet!