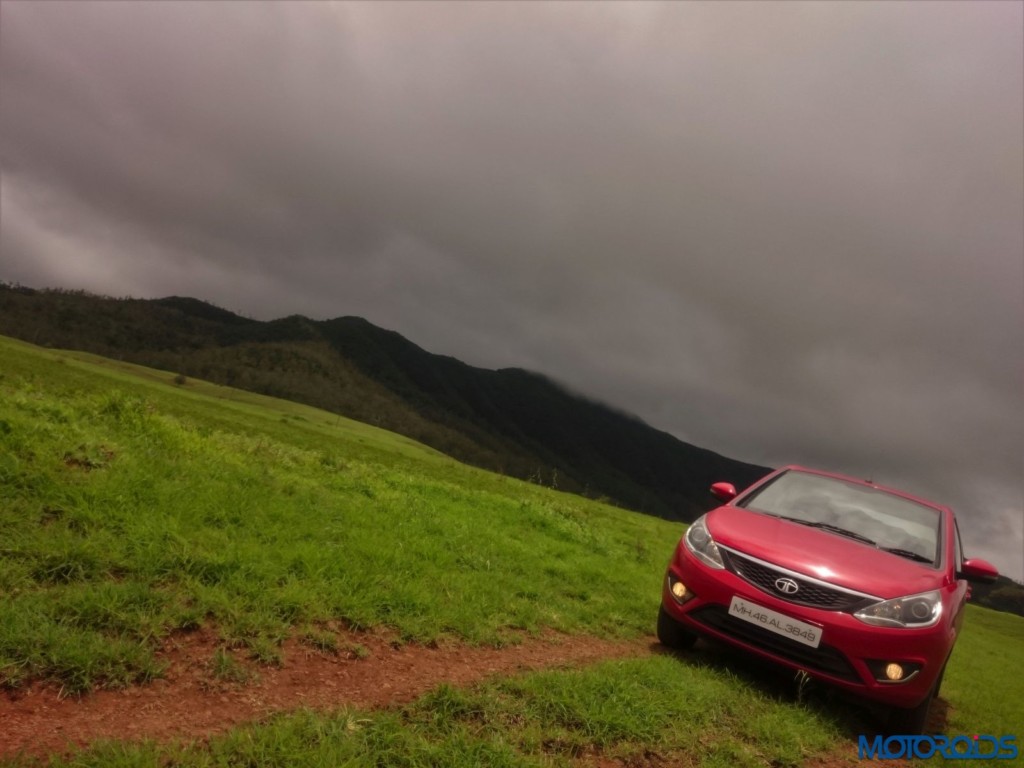 I’ve been murdering my non-existent grey cells lately after deciding to take a course in a subject that I don’t understand. To top it off, the faculty taught in a language I wasn’t comfortable with. Furthermore, for being the illogical person that I am, I thought it would be a good idea to commute from Bombay to Pune and back everyday, since the classroom sleeping session would only last for 3 hours every morning. Fastening that thought and my partner in crime was our long term Tata Bolt XT Diesel, which had crayoned itself in its mother’s Luscious Red lip paint. The 3-week long course and an everyday 400 km commute done with, I then took off for a 700 km weekend trip around the psychedelically green landscapes of hilly Maharashtra and returned with a precise reading of 20,000 kms on the car’s odometer. Here’s a report on what living with the Bolt and raking in miles like a state transport bus driver has been like.

P.S.: The pictures you see are slightly hazy due to fog, the need to test a waterproof, not so smart phone’s fuzzy camera and pouring rain because of which a proper shooter could not be used. 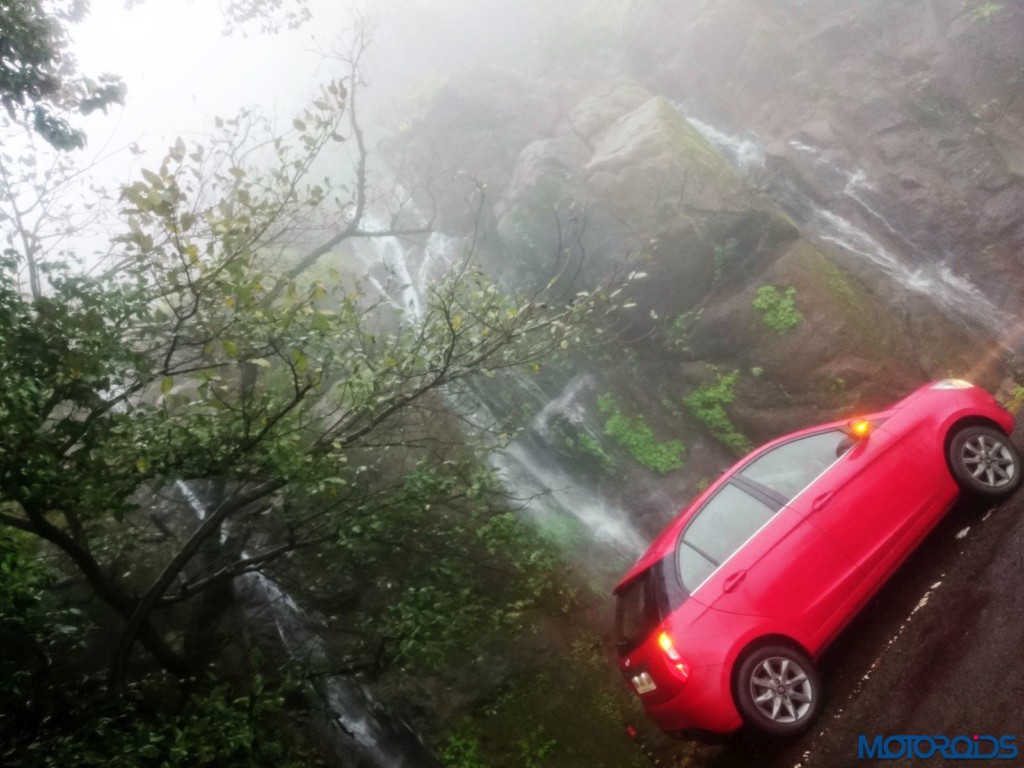 The very collective thought that came to the fore after having driven the Bolt extensively is that the car is practical, economical and an easy to live with package. Much has been said, written, experienced and discussed about the brilliantly punchy, yet frugal 1.3-liter Fiat sourced power plant, so we’d rather not put that track on repeat. In the Tata Bolt’s engine bay, it feels completely at home, and mated to that greased with butter gearbox, it can sing all day powered by that stellar mid-range thrust and not suffer a bad throat. Tankful-to-tankful economy figures have been as high as 24 kpl when i’d leave a still sleepy Bombay in the wee hours and settle in a 100 kph cruise on the expressway. Sometimes when i’d wake up late and try to reach Pune like I had an upset stomach and the only toilet to destroy in the world was at the destination, the Bolt’s lowest economy figure would drop down to a still ridiculously high 18.3 kpl! 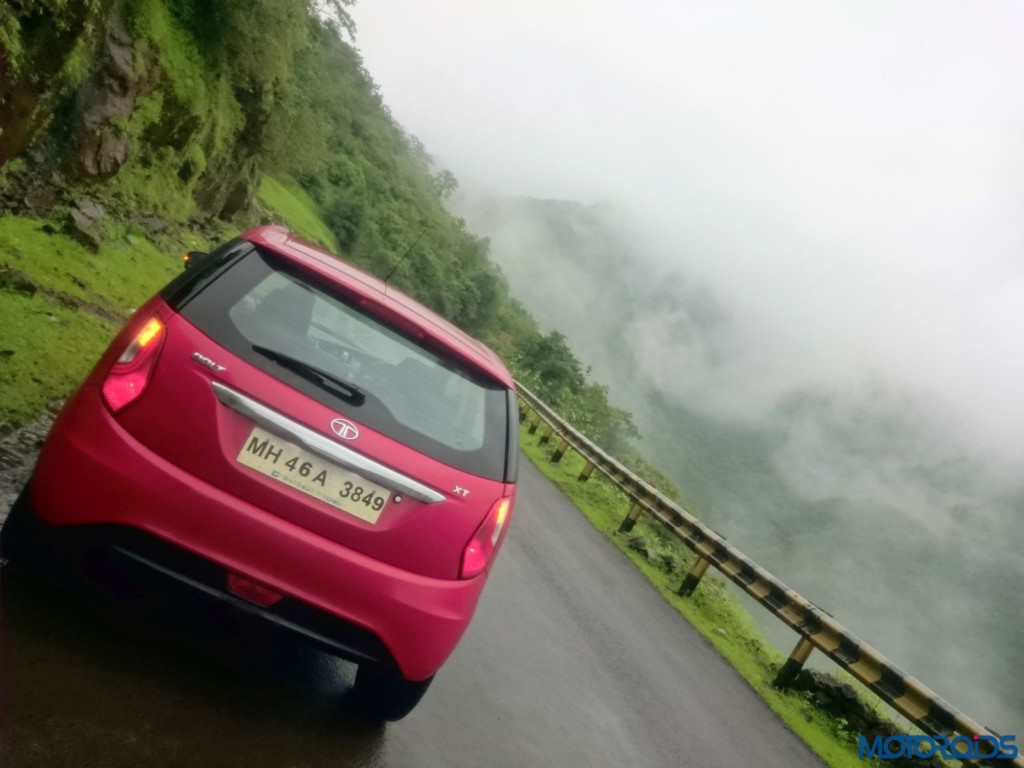 No of times it has been serviced: Nil 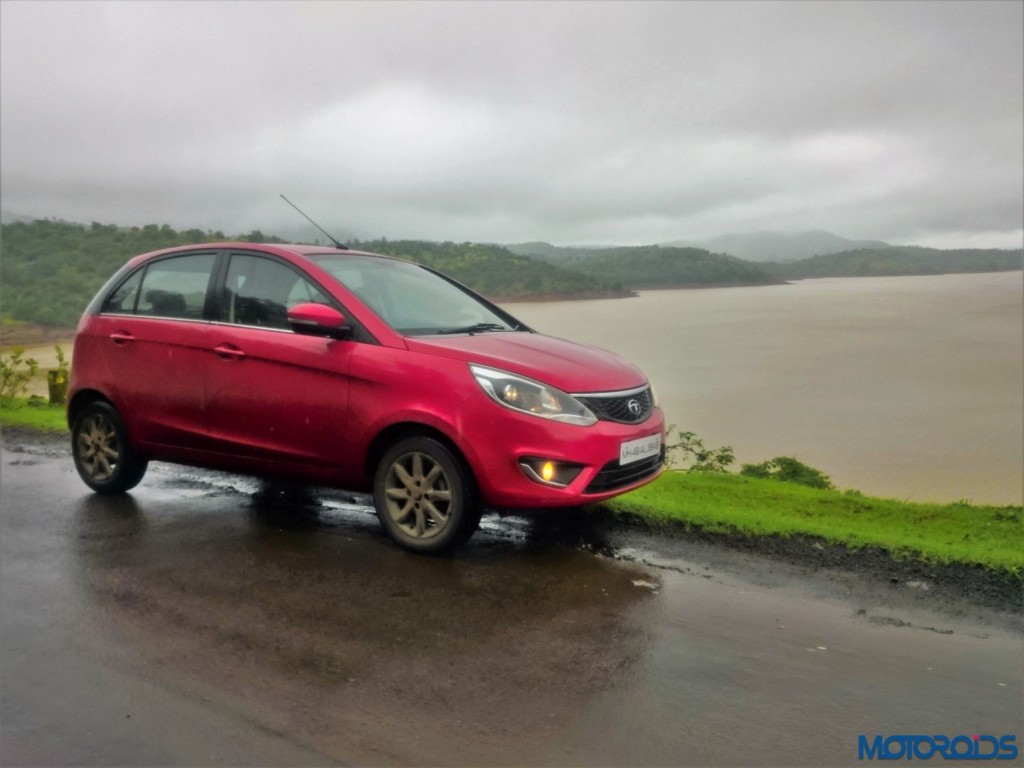 Running on stock Goodyear rubber, the ride quality changes drastically if pressure levels are optimistically set by even a margin of 2 psi. Maintaining an all round figure of 30 would make things supple and then the car sort of glides over undulations. But every time the air was topped up at a roadside shop, inaccurate gauges would lead to overfilling and the ride would become firm, slightly unsettled and grip levels would slide slow. 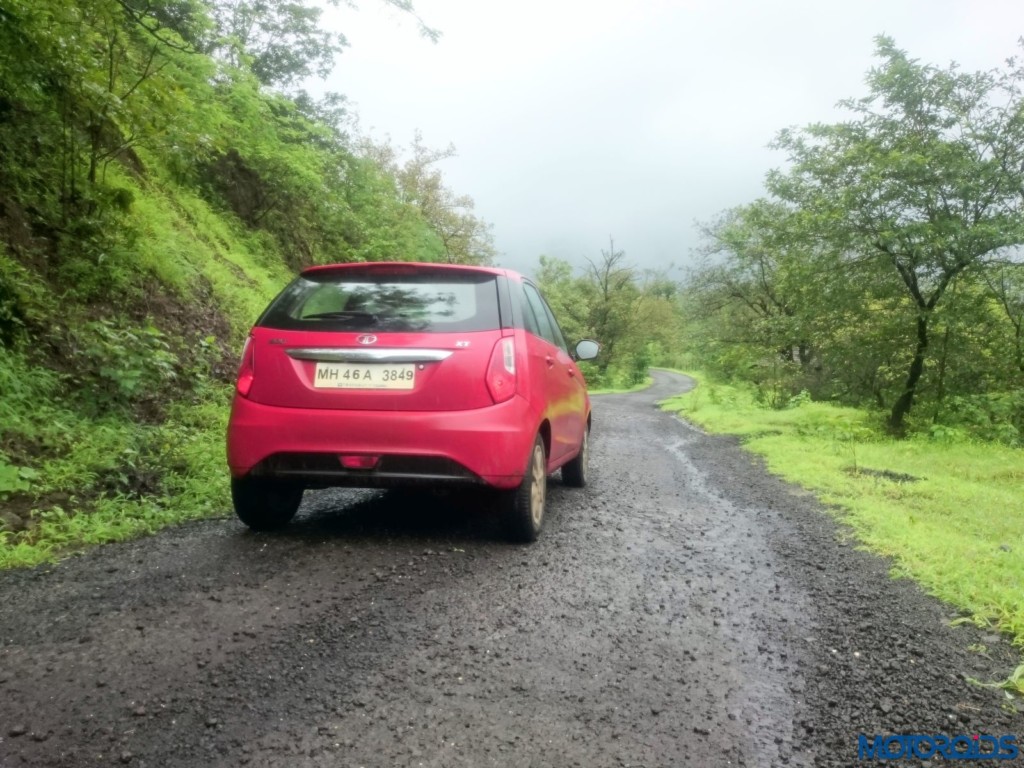 Since it has been raining, all of India’s major rivers have been diverted to flow across the expressway and other highways around Bombay, yet the Bolt never lost its composure, even when it would repeatedly lose traction and glide over a film of water almost every 10 meters. The car’s straight line poise and high velocity manners are Boss like even when it’s driven near its top speed. So much so, even the passengers are all jolly until they see a distant car growing bigger at an alarming rate and glance at the speedometer. 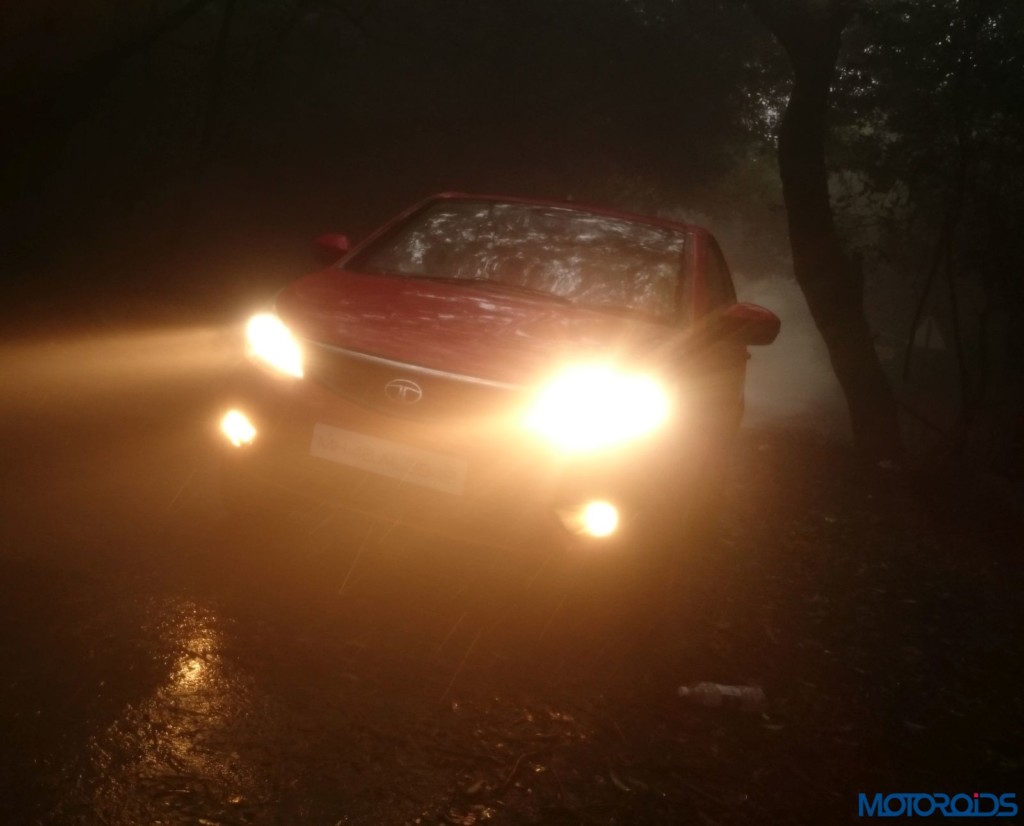 On the illumination front, the front fog lamps lack intensity and a brighter bulb inside will surely light things up better. The projector headlamp setup too could’ve done with better throw and intensity, as the low beam sits too low even on the highest setting dialed in through the adjustment switch. 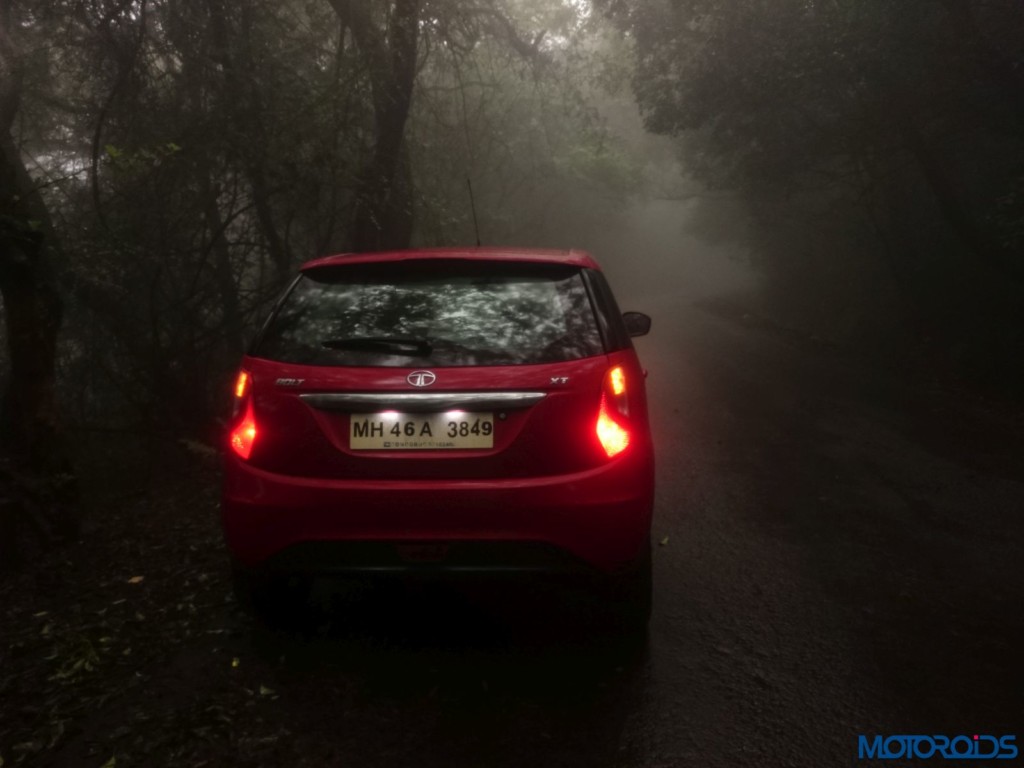 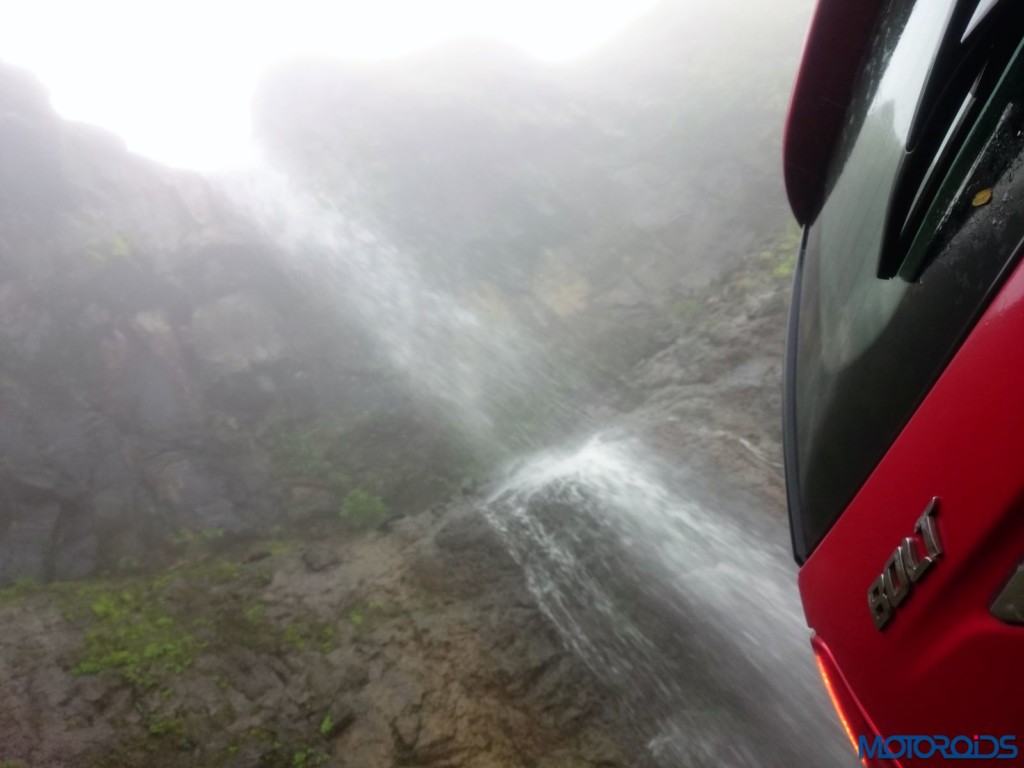 Air-conditioning is top class and we don’t know which other car can cool its cabin in such a quick and effective manner. Such is its sub-zero Alaskan nature, even on sweltering, sunny days, we’ve found ourselves turning the dial on the ACC unit to its equatorial side. During my recent weekend trip, I used to get out of the car frequently for some pictures while it was pouring. When i’d come back, i’d set the temperature to 24, direct the airflow towards my feet and face, and warm air would pamper my feet and also dry out the foot well. At the same time, some pleasantly cool breeze would come out of the main vents and not make you nauseate, like it happens when you switch the heater on. There is a dedicated button to demist the front windscreen, and full marks to Tata for being thoughtful and getting things right with the climate system inside. 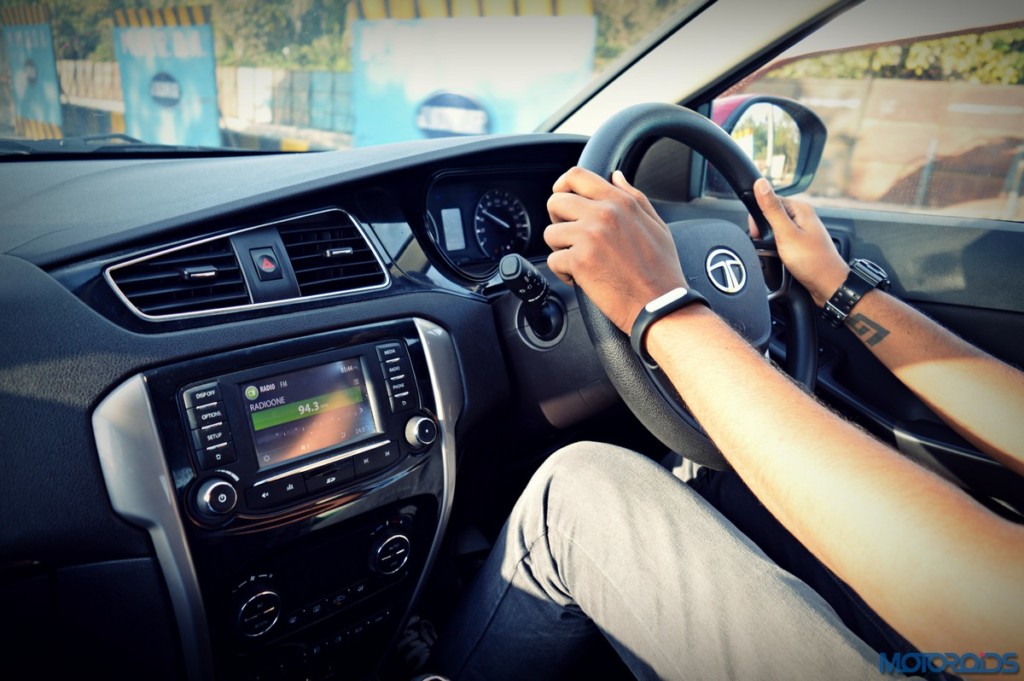 The new steering wheel which also does duty on the Tiago and the Safari at times feels like it has been perennially sprinkled with boric powder and allows your palms to constantly slide about. Especially while maneuvering the car in tight lanes, when taking a U-turn or when enthusiastically attacking corners, your palms are at a constant struggle to get a grip on things. Having said that, the wheel’s size is just perfect, it can be adjusted for rake if you like it high or low, and all that it needs is a simple fix in the form of a decent wrap in leather or any other such good to hold material. 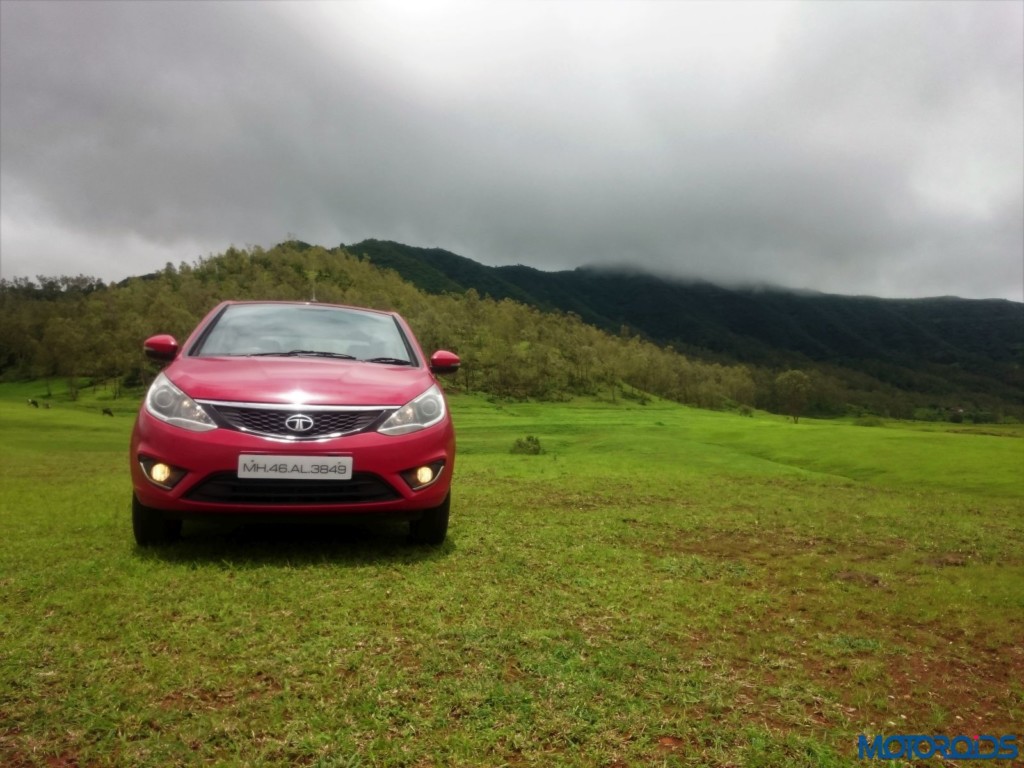 Back-lit controls on the steering feel sturdy to use, our only grouse being, if only the toggle switch for the central display in the instrument console could’ve been placed on the wheel too. It is a little difficult to put your hand in that little space through the steering wheel and flip through required information while driving. The voice command switch on the wheel is a nifty feature that recognizes your vocals in a jiffy even when you ask the lady to call a person with a difficult sounding name from the phonebook. 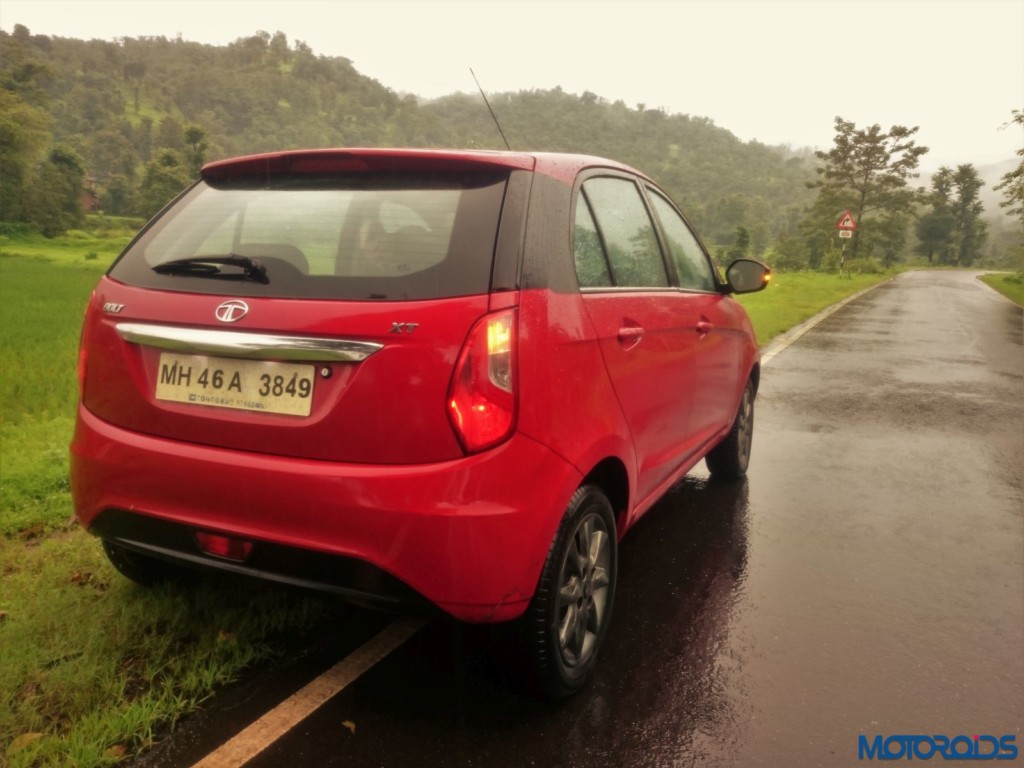 The best-in-class Harman sourced music system sounds fantastic and continues to impress, only that it requires a factory reset when it sometimes fails to pair our phones via bluetooth. We like the button which lets you turn the display off altogether while the system still fills the cabin with all your melodies. A lone glass/cup holder in the center console wants you to share your coffee with friends, which is great if you’re a man and she’s a woman. But for same sex friends, a simple protrusion inside the glovebox’s lid for some brew to rest there would’ve helped a great deal. 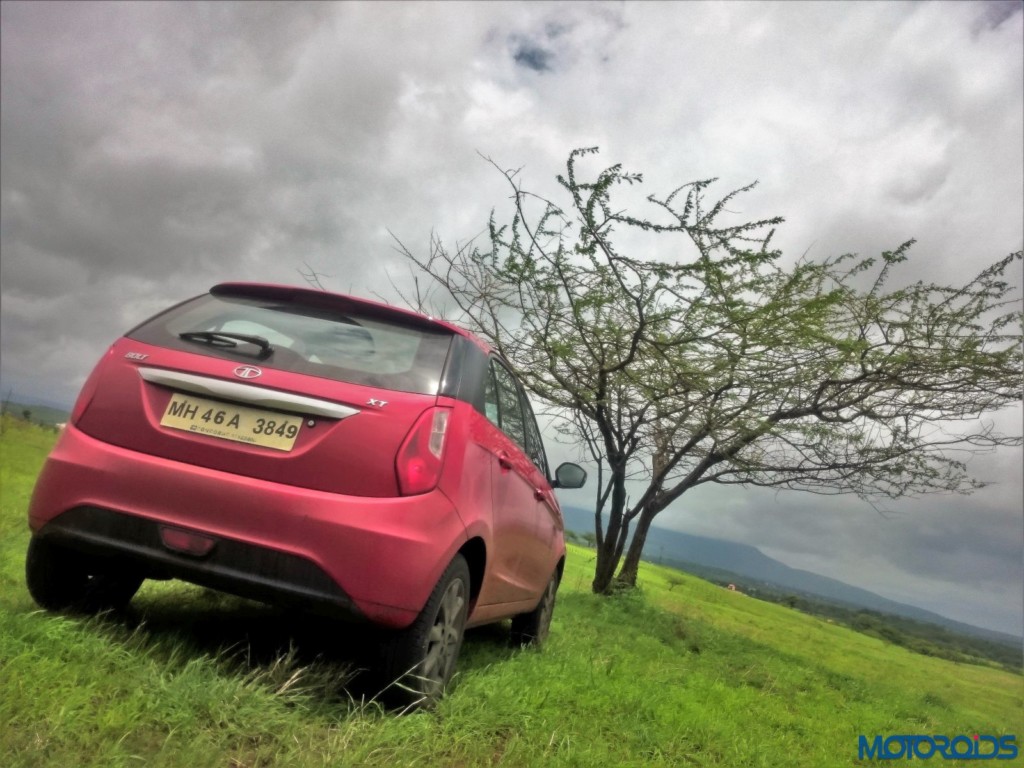 For the absence of bottle holders, you may place them in a tray below the front passenger seat. If too lazy to do that, then the trick to place a 1-liter water bottle in the door pocket is to empty it a little and push it forcibly into that space to let it sit there in a slightly deformed state. That way, the bottle will be slightly out of shape by the time you empty it and that sight will also remind you to crush the bottle before disposal. We don’t know many people for whom bottle and cup holders are deal breakers though, and that is how it should be. 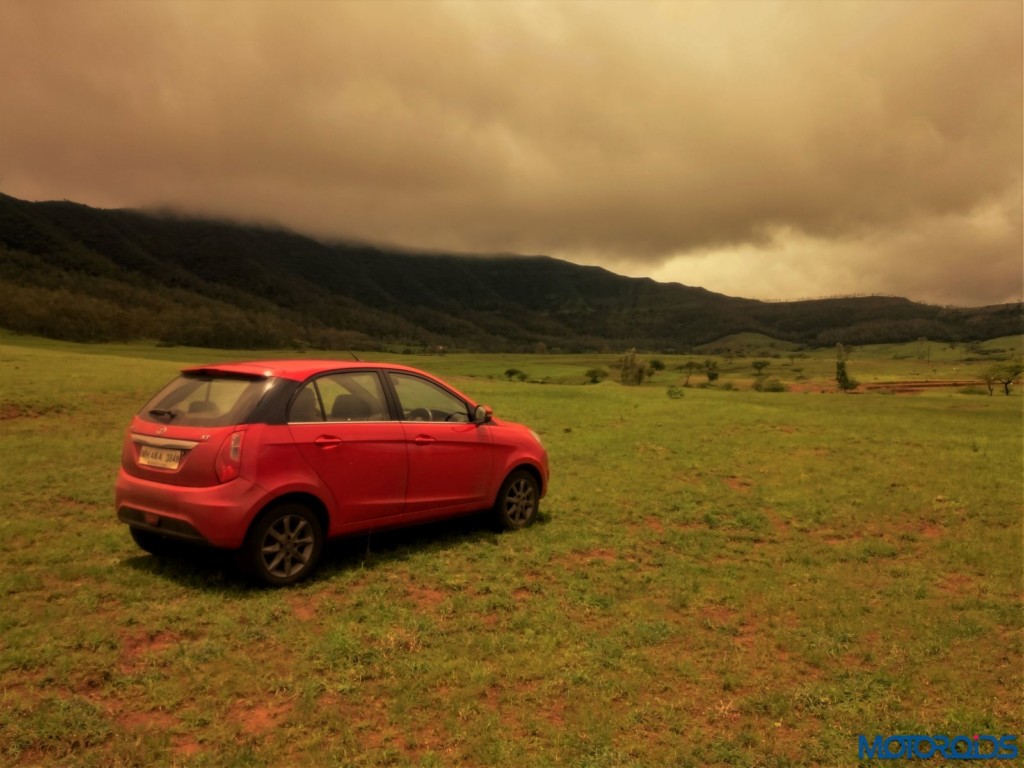 There are some really thoughtful touches too. Like if the front wipers are on and you’re reversing, the rear wiper comes on automatically. Then there’s a follow me headlamp switch on the flip key, which also brings on the cabin light at the same time. You can download an app for the infotainment system to mirror your phone’s navigation screen and there’s a glowing ring around the key hole to guide you when it’s dark. You could be seated anywhere inside the Tata Bolt’s cabin and there is never any dearth of comfort or lack of space. 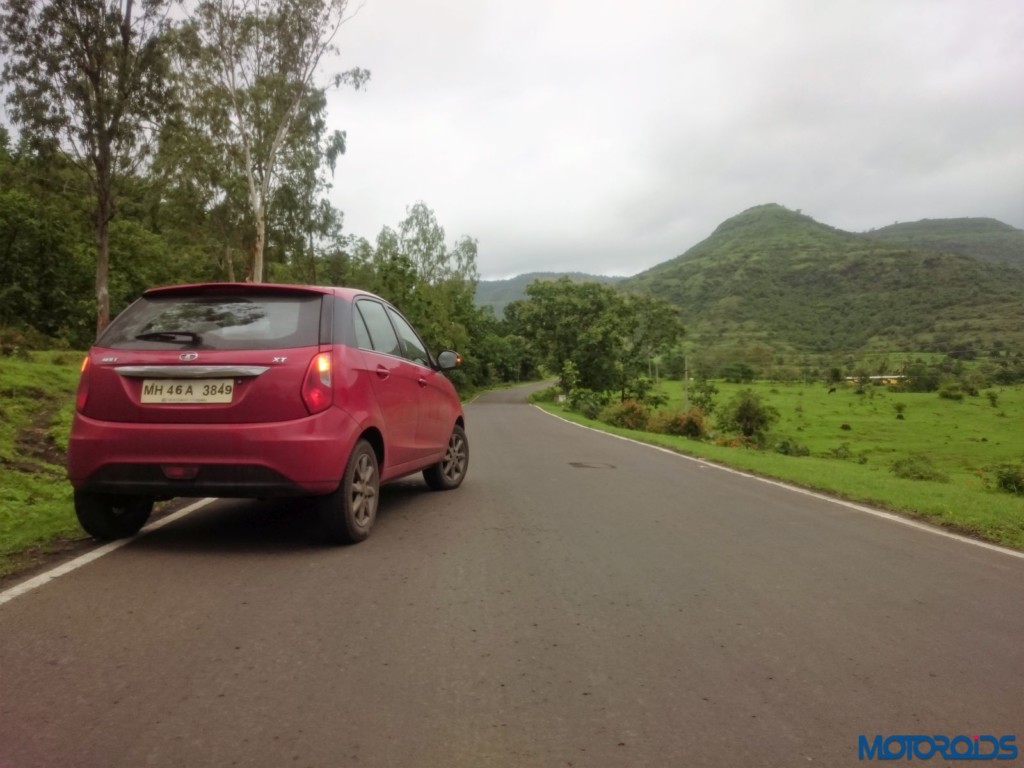 At 165 mm, the Bolt’s ground clearance is only 5mm shorter than that of the KUV 100! That gives us the liberty to take this car to places where even some so called SUVs would think twice and never did it even once make us feel that something might break. The Tata Bolt is assuringly robust that way and has always obliged with everything that we’ve thrown in its way. It has been doing that without protest or any whines which come in the form of rattles and creaks. There isn’t one unwanted sound we’ve heard until now even after such regular abuse. And when you drive a car that sends out such confident feels, it has a very reassuring effect on your psyche. 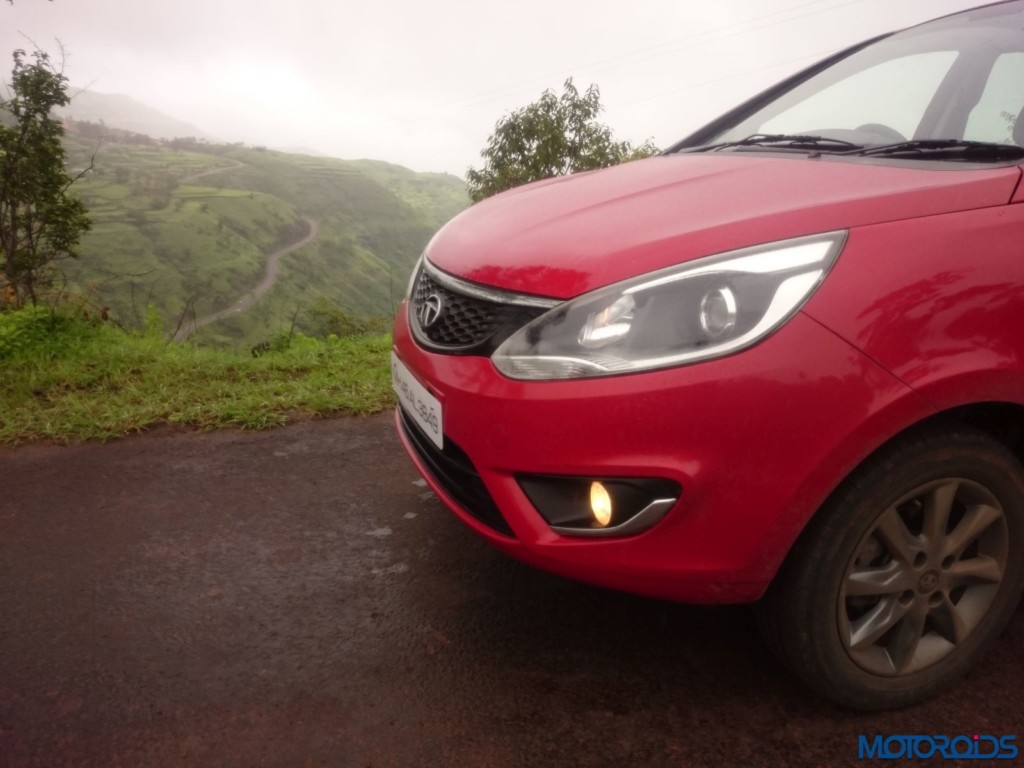 Tata Motors has used their best spanners to tighten this Bolt and while it has been with us, the only thing that required our attention is a lone puncture while it was still in the parking lot and a wiper blade replacement so we could see better.

Such is our trust in this machine now, we can pick any place on the map and we know it’ll take us there and bring us back as long as there’s fuel in the tank. Then there’s also this strange sense of patriotism one feels when driving this car. That feeling is felt with pride when complete strangers get in and are pleasantly surprised to find out that it is a Tata product. This homegrown workhorse is due for a service now and we’ll return with more updates as this cherry on wheels gobbles on many more miles. We have faith it’ll do so relentlessly.