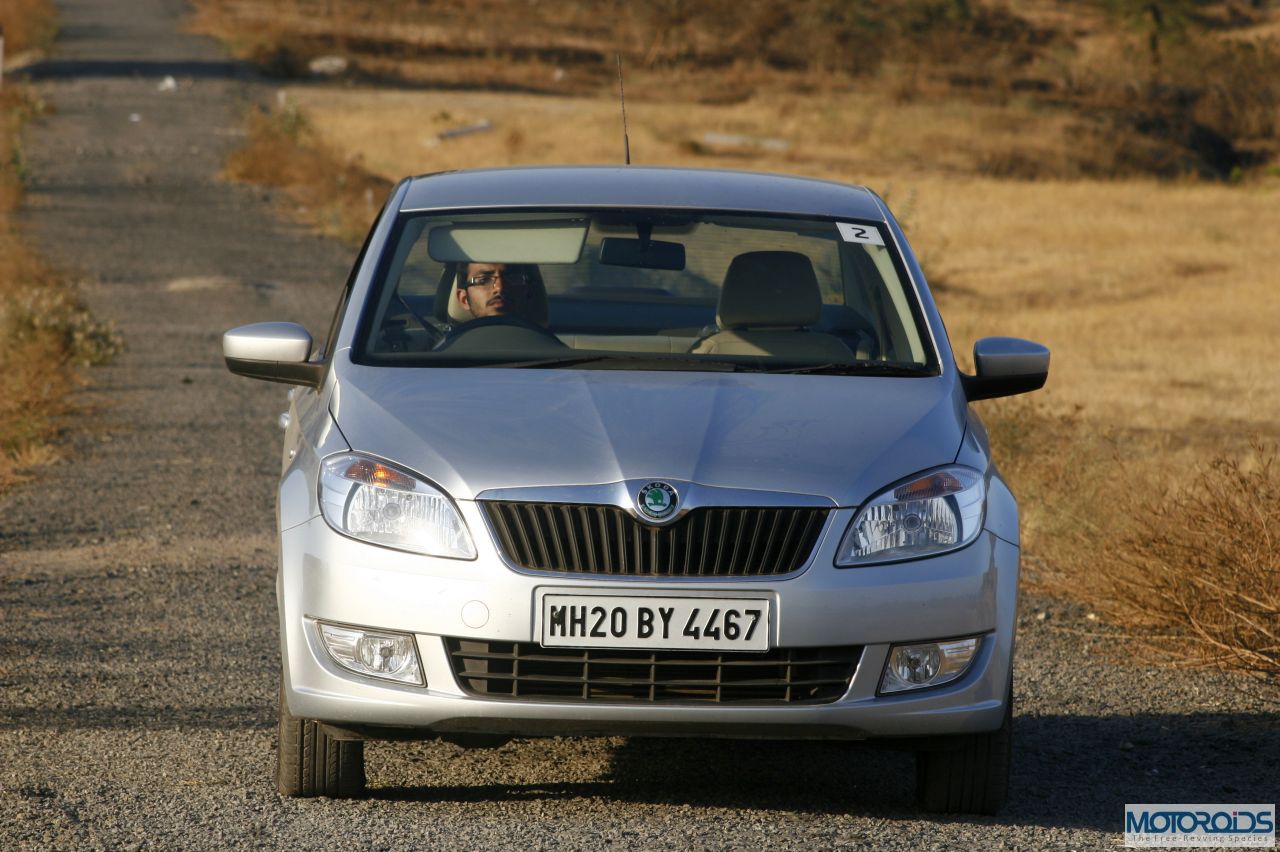 We reviewed the Skoda Rapid during a pre launch event, driving it through the rustic Rajasthan on the state’s deserted open highways. We couldn’t however get a chance to drive the car in slow moving traffic conditions. So we took the 1.6 TDI Elegance variant of the car again for a test drive through the congested city streets of Mumbai, drove it to our heart’s content, and then took it for another long drive to Pune, just to be thorough. Here’s what we made of the car over a test drive of close to 800km.

Handsome is the word 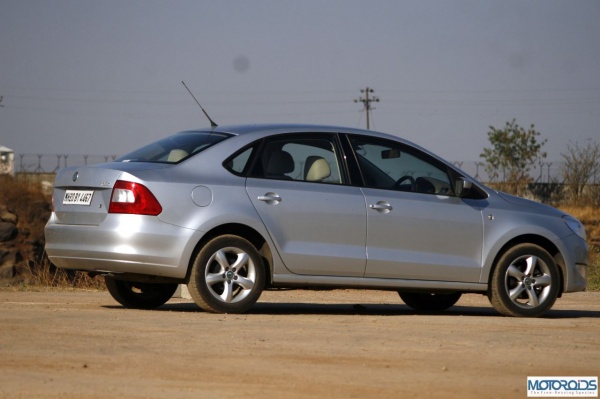 The Rapid looks like a study in good proportions, especially when you look at it in profile. The length, the height, the overhangs, the sculpted wheel arches, the tight shoulder line – the Rapid by all means looks like a sophisticated design, something that reeks experience, class and good taste. As we all know, the Rapid owes its existence to the Vento. And the resemblance shows as clearly as it ever could. The front grille, along with the elliptical lamps and a different shape for the bumper are the biggest differentiators. I quite like the face of the Rapid, a little more than the Vento probably which makes you wonder whether it’s the Polo when looked upon head on. Resemblances continue at the rear end as well. The tail-lamps and the slightly different creases on the bootlid are the only giveaways.

VW’s increasingly familiar and now somewhat repetitive lines, especially in profile make themselves oh-so-evident. Slightly longer than its Vento cousin thanks to its Skoda snout, the Rapid, however, impresses with its clean lines and subtle athleticism.

Overall, the Rapid looks like a mature product. It may not be overly enthralling visually, but it’s a grown-up, sophisticate product with great finish on the outside. It’s most definitely one of the more tastefully crafted automobiles in its segment. 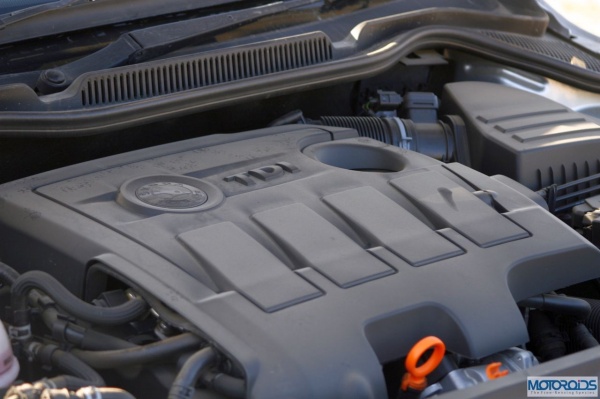 The 1.6-liter TDI mill powering the Rapid produces a healthy 106PS at 4400 rpm, and 250 Nm of peak torque at a wide, and lowly rev band of 1500-2500 rpm. All that torque at such low revs with short ratios in the lower gears makes the Rapid roll by itself without any accelerator inputs at low speeds. There is a problem there though, but more on that later.

The TDI mill which essentially is the same one as seen on the VW Vento, sounds a little noisy on cold starts. The clatter settles downs once the engine warms up nicely. Enough torque to trundle along is available from as low as 1000 rpm, but the real surge can be felt post 1800 rpm. The good thing is that the turbo kick-in doesn’t result in a sudden spike in power. The build-up is rather linear for a turbo diesel. Once on song, the Rapid validates its name by gathering speed rather, er, rapidly and making light work of overtaking on the highway. I enjoyed my quick drive to Pune and back, and there generally wasn’t anything on the road which I had to break a sweat to pass. In-gear acceleration of the car is fantastic and you really don’t have to shift before making a move. That 1.6 liter unit is a capable motor and lends the Rapid enough grunt to be termed a capable performer. 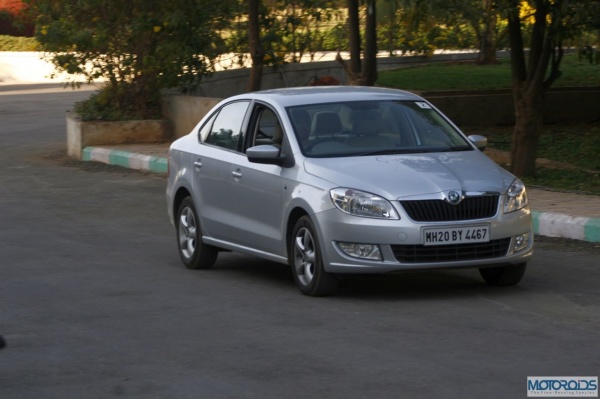 The engine is mated to a 5 speed manual transmission. The petrol variant comes with an auto option too, which somehow is not the case with the diesel variant we drove. We’d rate the gearshift quality as good, but not too great. There is a certain degree of notchiness to the shifts, and the feedback isn’t too great. We have seen better shifter units on some other, cheaper Skoda cars. Nothing much to complain about though.

All in all, it’s a great engine-tranny combo, which makes for an enjoyable, effortless drive, especially on the highway. 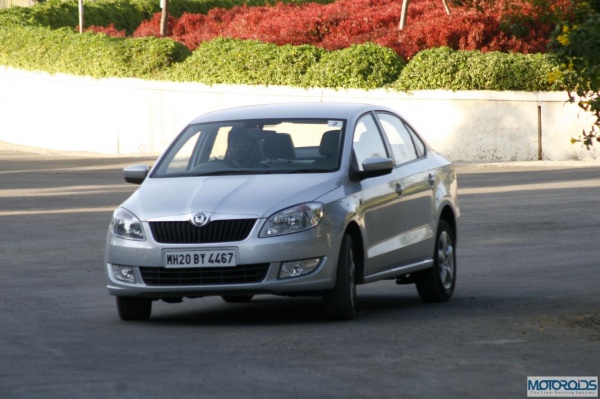 The height adjustable driver’s seat, and the tilt + telescopically adjustable steering allow you to find a good riving position rather quickly. As you grab that premium looking four spoke Skoda steering wheel, you do, for once feel that it’s lighter to operate than on some other Skoda cars.  While that may be a convenience, especially for the ladies within the city, I wouldn’t want my Skoda to feel like a Maruti from behind the wheel. Thankfully it doesn’t! The steering tightens up nicely as you gather speed, offering enough weight, tactility and tautness.

I drove the Laura on a 500km round trip to Pune and beyond and the car pleased me throughout the journey. It feels well planted, and has that sense of sure-footedness and solidity which the Skoda cars are very well known for. The Rapid has poise and composure which some other products in the segment, like the Honda City and the Verna Fluidic somewhat lack. It’s engineered well, and it shows in the confident manner this baby puts forth its feet. While the 185/60 R15 tyres seemed sufficient to handle some aggression around the Lonavala twisties, the body did roll just a wee bit to prove that the suspension has been set up for good ride comfort too. Having said that, the Rapid still manages to be one of the most sure footed cars in its segment. It’s way ahead of the Verna and the City as regards dynamic stability, body control and feedback. I drove briskly through a variety of well paved curves and not once did the Rapid perturb me.

An impressive aspect of the car was its cabin insulation. There was hardly any wind or road inside within the cabin, and even as I made a dash back home in the evening, at speeds which were more than normal, I could hardly hear any air noise. The suspension kept the backseat occupants happy. The ride quality on the Rapid is decidedly better than its Vento cousin – more pliant and absorbent at both high and low speeds. 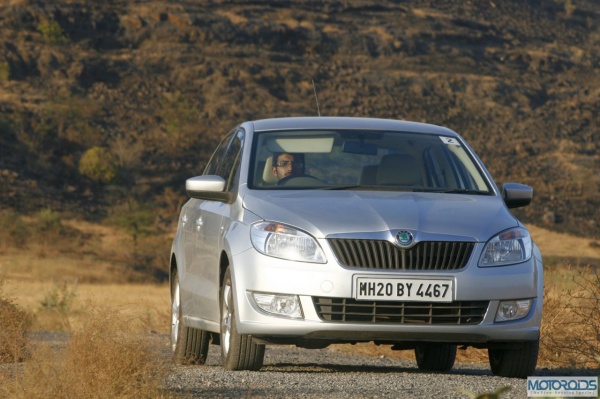 Driving within the city, I realized that the Rapid has an endless reservoir of torque lower down the rev range. In slow moving city traffic, when put in the second gear the Rapid wouldn’t require you to even have the accelerator pedal pressed, as it will crawl all by itself! That may sound very convenient, but in the Rapid’s case, it really isn’t. You see, while driving through traffic jams and other congested road conditions, you aren’t exactly crawling all the time. You move in small bursts, and most of the time is spent in a stationary position. At really slow speeds, the rapid’s clutch turns out to be rather heavy and hard on the foot to modulate. This may sometimes lead to jerks as you set into motion from standstill at a very slow speed. I don’t know whether this was a one-off case, but the car I tested wasn’t very easy to drive through the bumper to bumper traffic of Mumbai, especially in the rush hour. 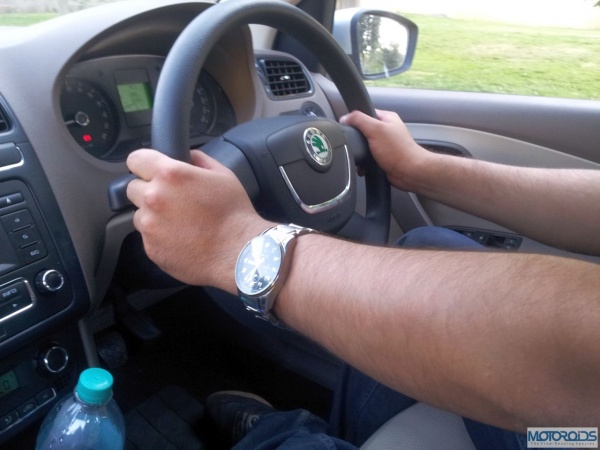 The rapid presented itself to me as a neat, elegant car as I opened its door and climbed in. Its cabin isn’t as flashy and instantly appealing as that of, say the Verna, but it does have a whiff of understated assuredness about it. The ergonomics are pretty good, the quality of plastics and other materials is good, if not great and the chrome inserts in several places such as on the steering wheel, below the A/C and audio controls, and in several other places within the cabin helps lift the premium quotient a bit.
Features within the cabin are ample, if not class leading. You have a tilt-telescopic steering adjustment, Auto A/C, Anti-glare RVM, and a trip computer with a sea of information including average consumption and distance to dry. The backseat has its own set of A/C vents, which helps expediting the cooling process, especially in the hot Indian summer days. Another nifty feature is the passenger side seat adjustment from the back bench. You can just operate the lever behind the front passenger’s seat from the back bench, push the seat ahead and extend your kneeroom. Pretty cool, and unique!

The 4 Speaker Skoda audio system sounds pretty decent for the class. It can play CDs, has an Aux-in jack, is connectable to most portable media players and can also read music from your SD / MMC data card. It doesn’t, however, have a USB-in jack which is one of the key points in the checklist of car buyers. We just hope Skoda does something about the omission soon enough.  We also thought that the dashboard didn’t have enough cubbyholes to store articles like wallet, cellphone and other knick knacks. A couple more open compartments would have made life easier. The space beneath the central armrest tries to make up, but I personally didn’t find it wide enough to accommodate my wallet. Also, it’s a closed compartment, and an open storage unit is required to be able to toss stuff in more conveniently. 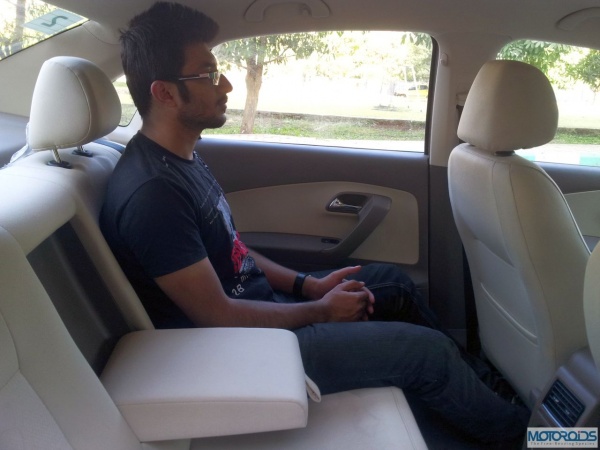 The legroom at the back seat is good for the segment. The seats are supportive and comfortable, and driving long distance as a backseat passenger in the Rapid should be quite comfortable. Add to it the low NVH, an absorbent suspension and a capacious 460 liter boot space and you have a comfortable sedan at hand capable of carrying your whole family to distant destination for more than just a weekend.

We are big fans of Skoda build quality. Even the Fabia, which I incidentally drove as my long term car for about a year, was built impeccably. In that sense, we have a feeling that the Rapid’s interior, although very well built, doesn’t quite have the finesse and refinement of its other siblings. A little more attention to detail would be appreciated, as we aren’t quite used to witnessing inconsistencies on products rolling out from the Czech firm. The cabin, even with all its proven ruggedness and ergonomic aptness, isn’t the most exciting of the lot. A little more youthfulness and vibrancy wouldn’t really hurt.

The 1.6 TDi Elegance that I drove over a period of two days returned me an average fuel efficiency of about 14kmpl. The average swung between 11.5 kmpl during bumper to bumper action to about 18kmpl as I cruised on open straight highways. Appreciable figures, those for a car that size, especially when I consider the fact that I was driving the car rather aggressively for at least 400 of the 800 km it travelled. 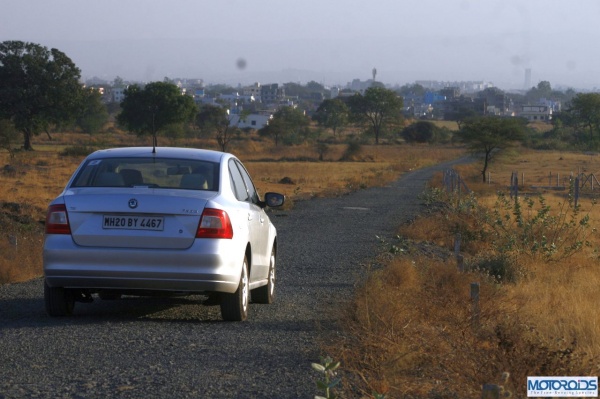 At Rs 8.04 lakh, the rapid comes across as the cheapest diesel car in its segment, more expensive than only the Nissan sunny by about two grand. In comparison, the Verna, even with a smaller 1.4 liter diesel engine, is priced Rs 25 thousand more at Rs 8.29 lakh. The Vento is expensive by about Rs 30,000. The top of the line manual variant (1.6 TDI Elegance MT) of the Rapid is also substantially cheaper than all its VW and Hyundai rivals.

The Rapid is a well engineered, well designed and well sorted car. It’s dynamically very stable, very fuel efficient, very comfortable and is good fun to get behind the wheel too. As you can make out having a look at the price comparison above, it represents good value as well. Skoda’s service and spares, however, is known to be more expensive than its Japanese and Korean counterparts. On the flip side, Skoda cars are very well built and won’t give you many reasons to make a trip to the service station. The service interval of 15,000km means lesser trips to the workshop.

All in all, the Rapid is an impressive product. It may not be an overly flamboyant , but it has an air of confidence about it. Without making much noise, the Rapid delivers on most counts, coming across as a capable, elegant and sophisticated automobile. Confident, but humble and gracious at the same time. One of the best in its segment!