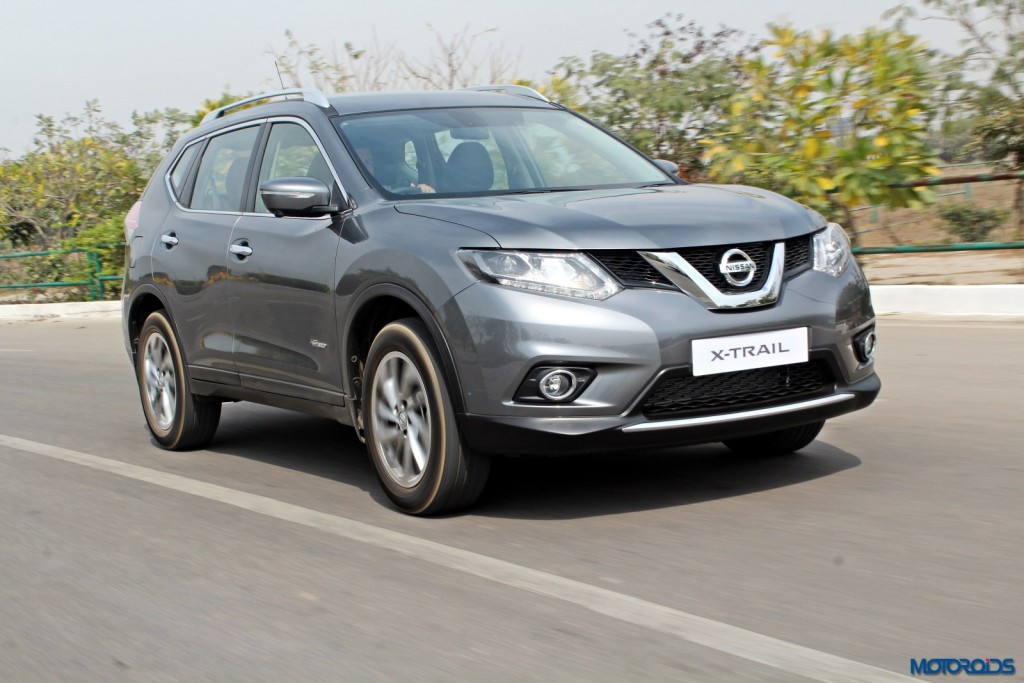 Is it really the X-Trail? Does it not look very different?

Sure does. The market for hardcore, rugged looking, boxy SUVs, meant to find grip where there is none is getting increasingly taken over by suave looking machines which focus more on the amenities and sophistication than the capability to climb over boulders. The X-Trail, thus, in its newest avatar has adopted a more refined, urbane look to take on its key crossover nemeses, and has also adopted the Hybrid tech for an impeccable green cred.

Tell me more about the styling

Shunning the boxy lines in favour of more contemporary, flowing lines, the new X-Trail Hybrid lends itself to the city streets more than ever. 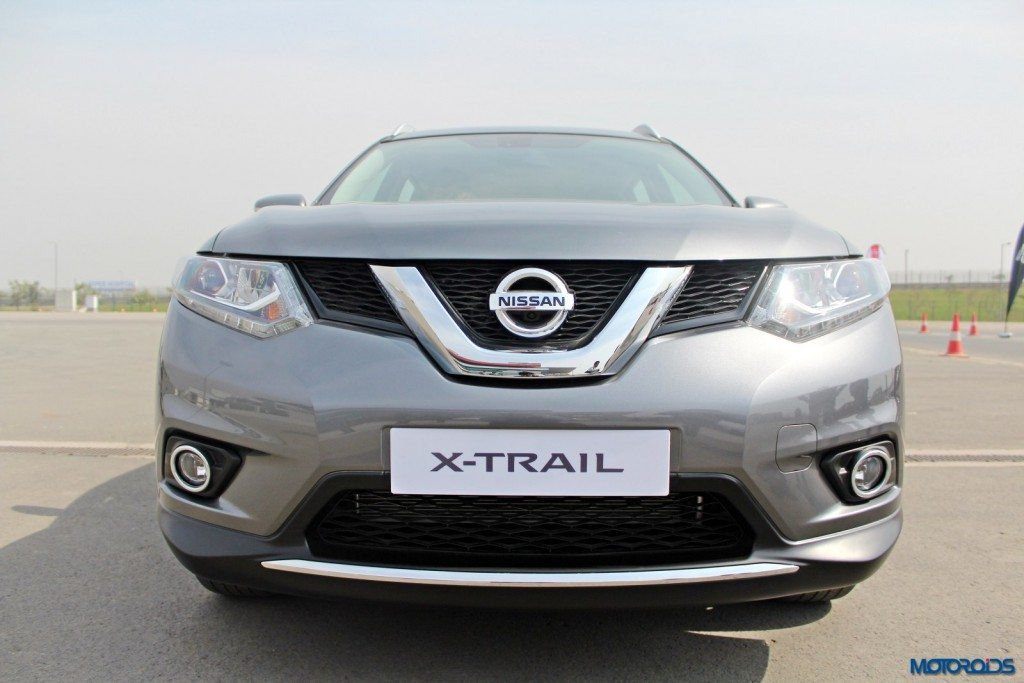 The front end is dominated by the V shaped Nissan family grille finished in chrome with the Nissan logo nestled neatly within. Rest of the radiator grille area is honeycomb mesh and is flanked by horizontally aligned, angular headlamps with LED DRLs. The twin illuminators inside the headlamps have one conventional unit along with a projector setup, and some chrome detailing.

The front bumper is a no-fuss, clean unit featuring round fog lamps with chrome bezels and housed inside a black plastic parallelogram.  A honeycomb mesh in the lower central part of the bumper, lined at the lower end with a satin silver slat rounds things up at the front. 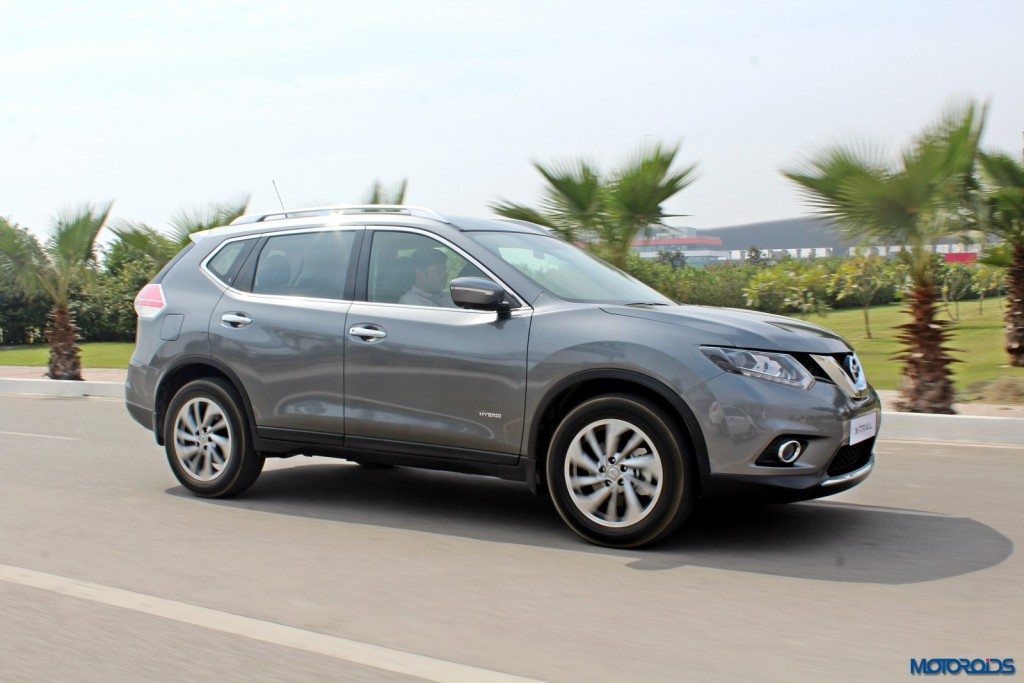 On the sides, the Japanese carmaker, much known for its design prowess has kept things clean and classy. The highlight of the profile is the chrome lined greenhouse with an upswept sill for the rear quarter glass. Door handles are finished in chrome and the wheel arches are mildly flared to accentuate the car’s outdoorsy character.

Black under-cladding runs all around to further underline the crossover traits. Wheels are 16 inch, 10 spoke gunmetal finish units with 225 / 60 Dunlop Grandtrek rubber wrapped around them. The silver finished roof rails further add a bit of adventurous air to the profile. 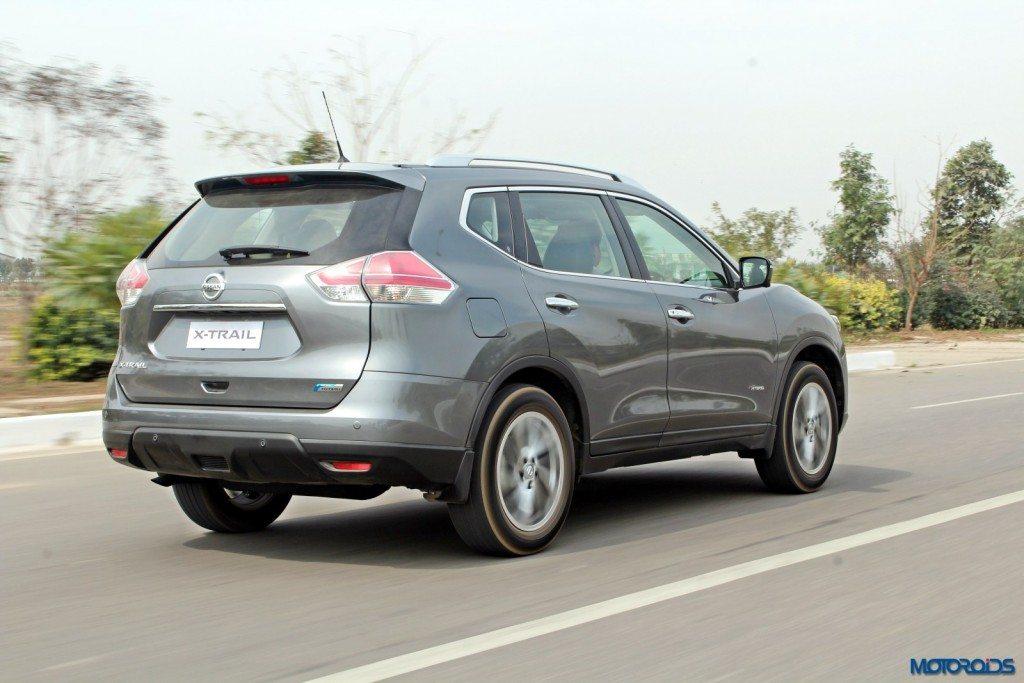 At the rear, the design is as classy and unfussy as everywhere else. The tail gate bulges horizontally outwards at its centre with a registration plate recess adorned by a chrome slat. The flanks of the rear windscreen get piano black appliqués with a sporty roof spoiler and a high mount brake light atop.  Black under-cladding with a faux diffuser at the lower centre finishes things up at the rear. 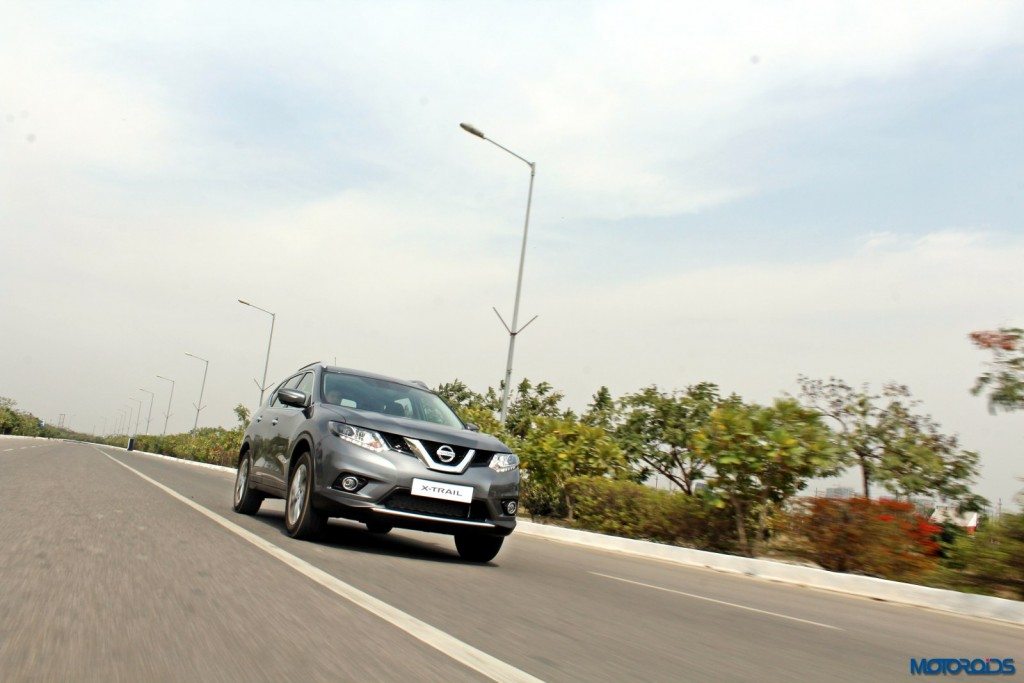 Overall, the new X-trail comes across as a well proportioned, contemporary and stylish urban SUV. It’s not dressed to kill, but looks nice with its refined, metrosexual appearance. Hints of blue on the Hybrid badging on the sides and at the rear underline its Hybrid powertain, making it look like a properly modern piece of kit which is perfectly at home trading the urbanscape.

What’s under the bonnet? 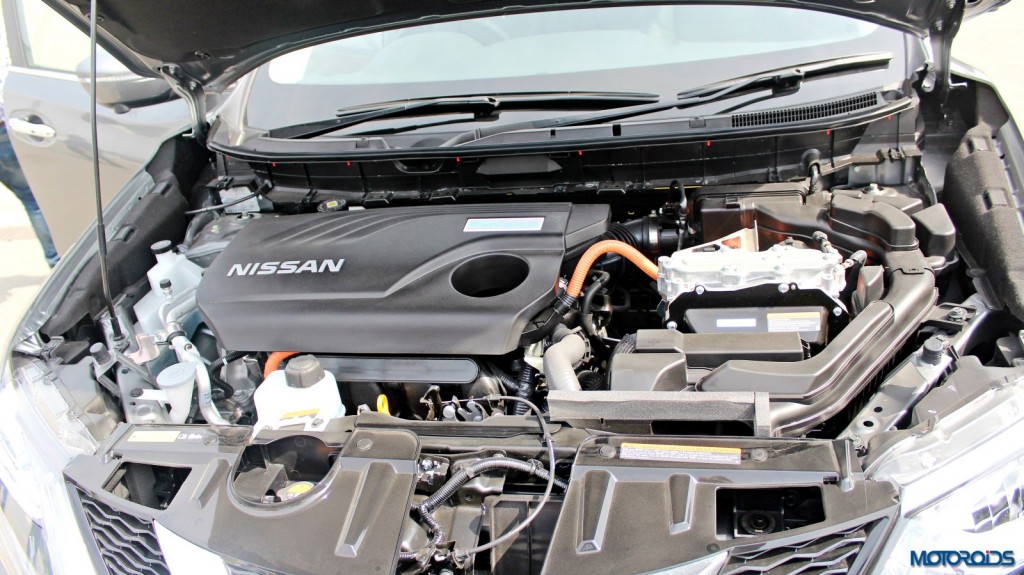 It’s a hybrid, so there are more sources to derive power than just under the bonnet. There is a massive battery pack for the hybrid system placed behind the rear seats. The system is a combination of a 1997cc, inline four petrol engine with 144PS / 200Nm and an electric motor with 41PS and 160Nm. The combined output from the hybrid system is 185PS and 360Nm, which makes the new X-Trail hybrid a reasonably punchy machine to drive. 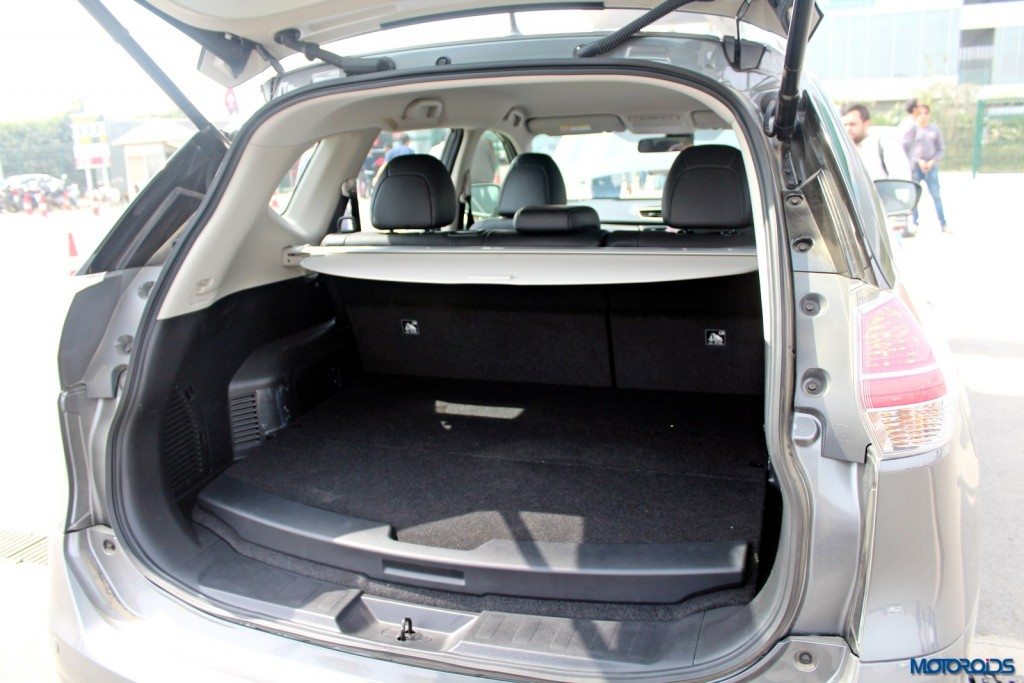 The system uses Nissan’s new FF (Front Engine, Front Wheel Drive) parallel hybrid system. Unlike the traditional hybrid motors that employ two motors, the FF system makes do with two clutches and only one motor, resulting in a compact architecture and a more efficient drive. 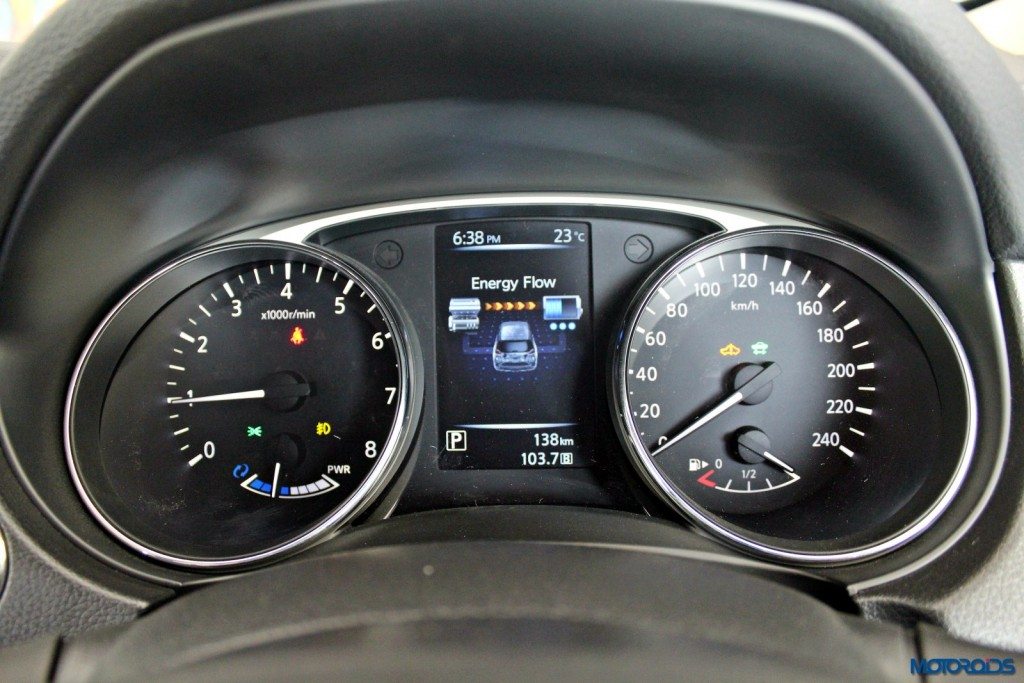 There are two clutches at work here, utilizing the power of the engine and / or the motor based on the driving conditions. The system can engage the clutch attached with the motor (electric) or / and the transmission (internal combustion engine) for optimum efficiency. The engine gets completely disconnected in scenarios like coasting or slow speed driving, saving energy.

The complete working of the system is explained in the video below.

How does it feel to drive?

Thumb the push button start and you wouldn’t know if the engine has come to life, for it wouldn’t have. You start off in electric mode, and if those compact Li-ion batteries are charged well enough, the car will keep moving till you attain the more than crawling speeds of over 30 km /h, at which point the engine also kicks in and works in conjunction with the motor to offer a decent shove. The engine could have been a bit more refined though, especially for a hybrid drivetrain. 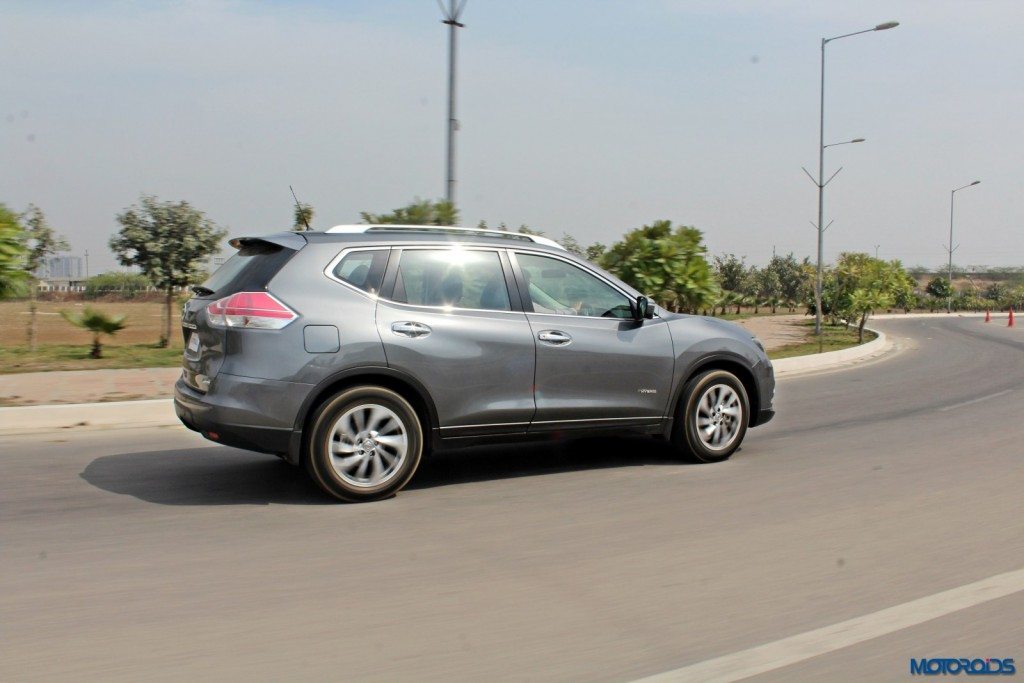 The acceleration thereafter is quite punchy, and the CVT transmission pretty smooth as long as you feather the throttle or part-throttle. Shifts feel seamless in normal driving conditions and the Hybrid tech takes over to disconnect the CVT and engine to run the car only on electric power as you coast. There are no pedal shifters, manual or sport modes here though – it’s as simple an automatic setup as it can ever get. 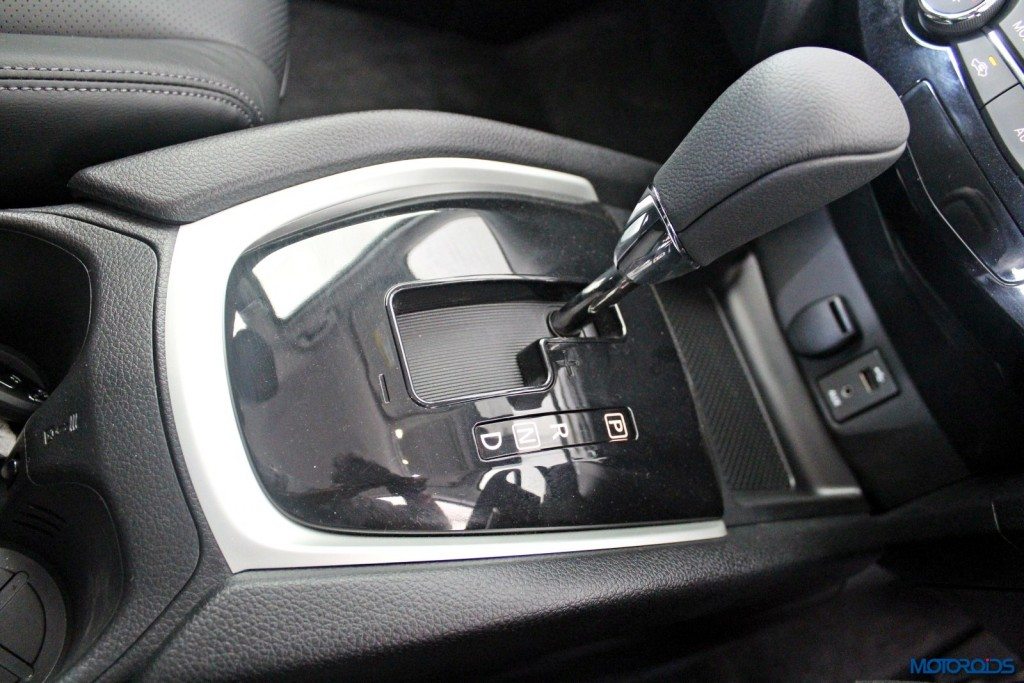 Kickdowns, however, arent’ as quick or crisp as we would have liked. There is some bit of lethargy to be experienced there, though the X-Trail in its newest avatar is meant to be a comfortable, refined machine and not a scorcher and the X-Tronic CVT does a fair job of swapping cogs. As long you use it judiciously, the system responds well. A display on the instrument cluster shows the flow of the energy, encouraging those with a willingness to save the earth do their bit. 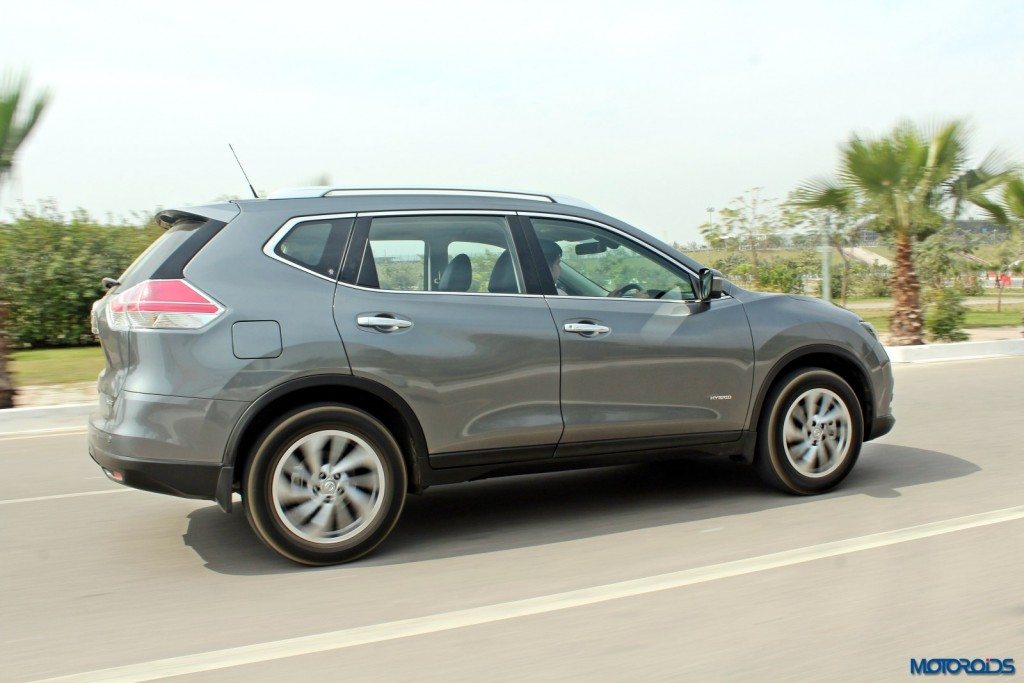 While driving the X-Trail hybrid over the rare few rough patches and undulations over the outer roads of the BIC, we found the ride to be quite compliant and absorbent. There is a wee bit of roll, but we don’t exactly expect a car in this segment to handle like a sportscar anyway. We’ll have to wait for a proper road test for the final word on the ride and handling of this one.

How comfortable and well-kitted is it on the inside? 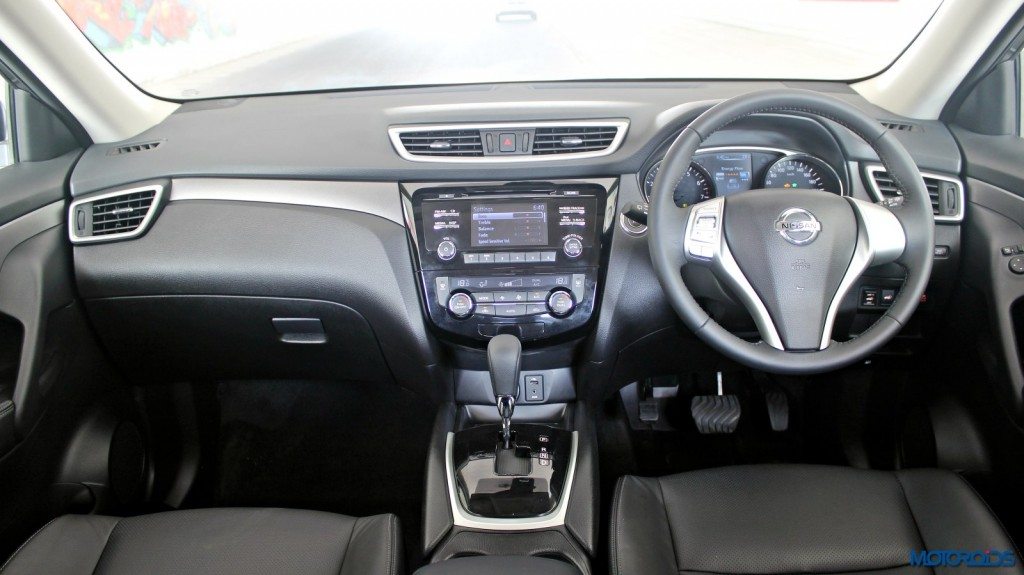 Based on the CMF platform that even the Qashqai is built on, the new X-Trail has grown is size. The wheelbase is now longer by more than 75mm increasing the room inside, though the battery packs behind the rear seats have taken up their share of space. Offered as a five seater, the X-trail hybrid feels plush and well appointed from inside with quality bits, great finish and leather upholstery. 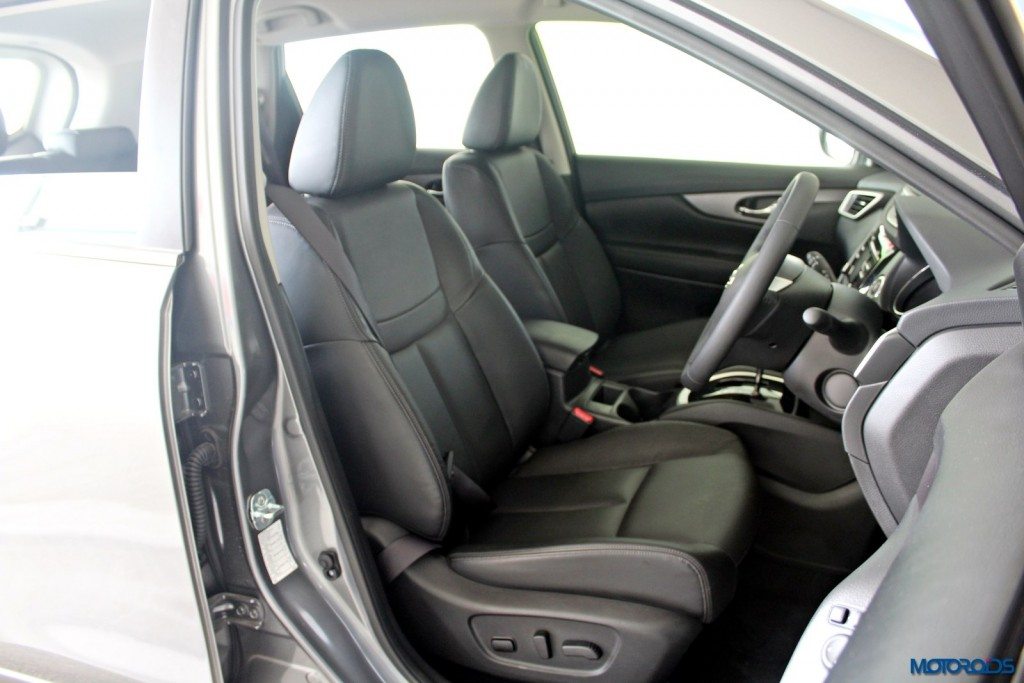 The front seats are very comfortable with the driver getting powered adjustments. We would have liked the front passenger seat to have powered controls too, though. 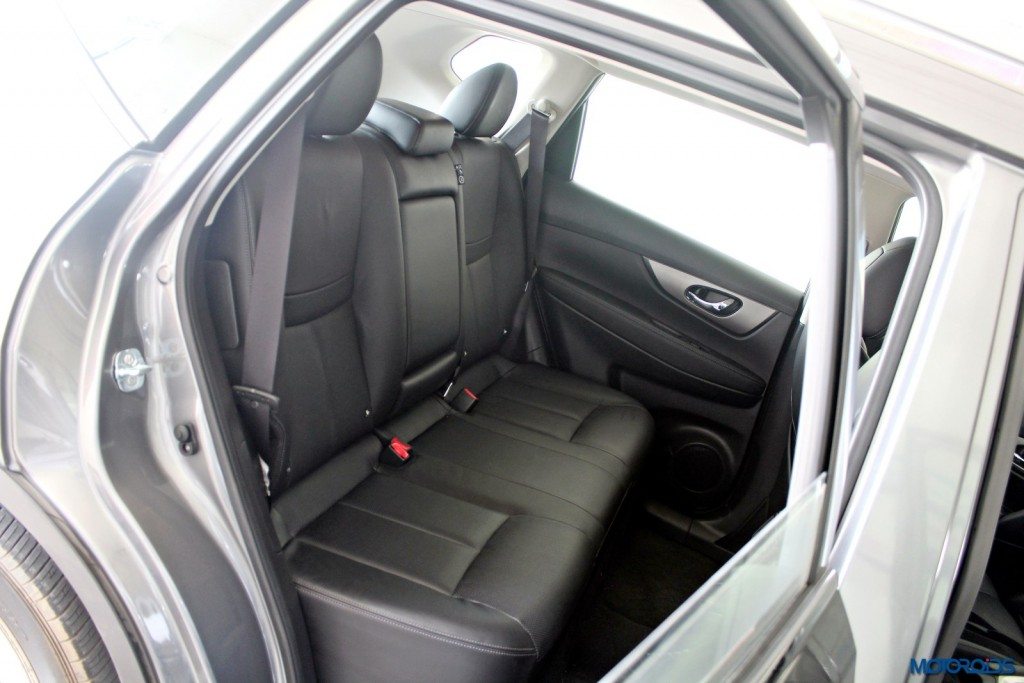 At the back, there is sufficient leg and shoulder room, with a pair of A/C vents and a central armrest. The space and comfort on those rear seats is pretty sorted, though there isn’t anything spectacular here to write home about.

There are quite a few interesting features inside the cabin though, the cooled cup holders, a 360 degree view reversing camera and Sat-Nav to name a few. The interior gets satin grey, piano black and silver inserts in places – all of which look and feels nice. If anything, the screen on the central console could have been a hi-res unit with touch controls.

We can’t really tell whether you should or shouldn’t as the X-Trail Hybrid hasn’t been launched yet. Much would depend on the pricing, and we expect it to be high (INR 35 lakh or more) knowing that it would be brought here as a CBU, attracting heavy import duties. 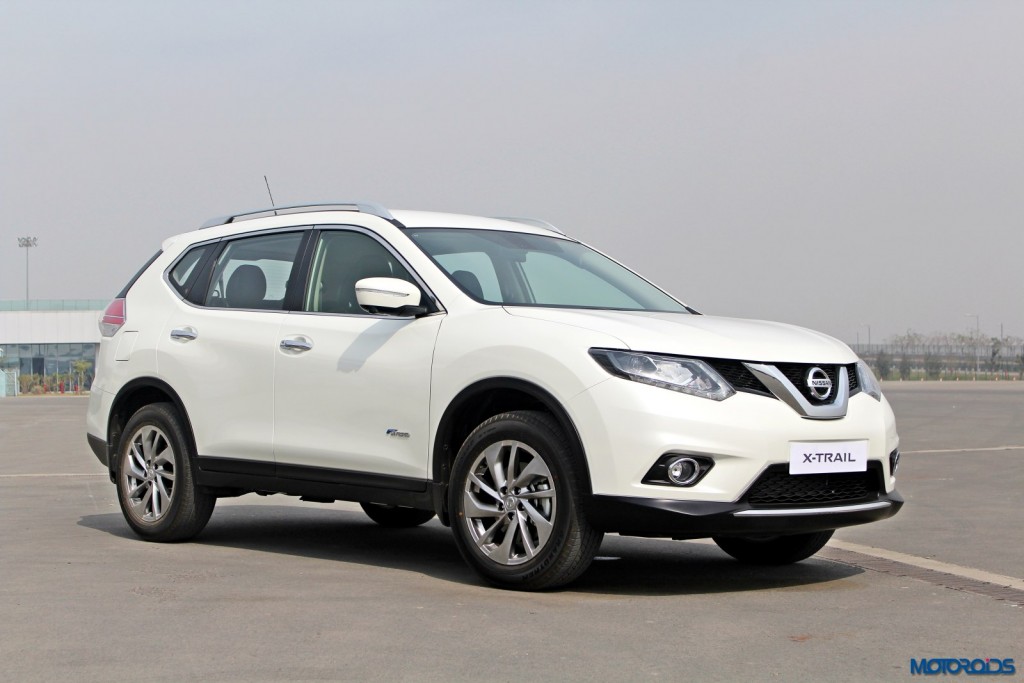 The X-Trail Hybrid isn’t your all-conquering rut friendly ruffian that the previous generation model was. It’s a front wheel driven, modern crossover which is meant to appeal to the corporate bosses who like to flaunt their green sensibilities while also having a slightly adventurous side to their personality. It’s a clean, green SUV with the much sought after Hybrid label.

We’ll keep our final verdict for after the launch, and for the time when we’ve driven this machine over a longer distance on public roads.