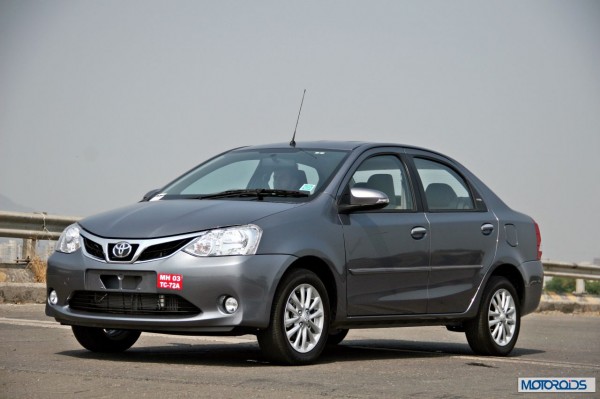 The made-for-India Etios wasn’t the kind of success Toyota is used to tasting with its products worldwide. In a bid to create a car that matched a certain price, they somewhat skimped on attention to detail and features, and the result was a (much) less than desired response to the spacious entry level sedan. Full marks, however need to be given to Toyota for their perseverance with the product and the small but significant changes they have constantly been making to enhance the car’s appeal.

After introducing a much improved version of the car last year, Toyota have introduced another significant update to the Etios with important changes made to the interior and exterior. We took the new 2014 Etiossedan out for a spin, and in the process, realized that in its current form, the entry level sedan from Toyota has come a long way from where it started its journey from. 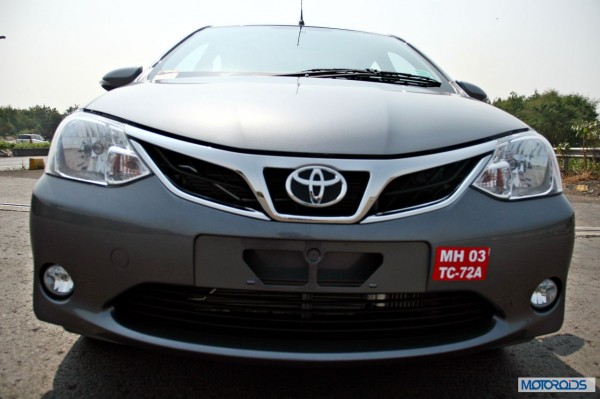 In its 2014 avatar, the Etios sedan gets a brand new radiator grille. The amount of chrome on the grille has been increased significantly, in line with the preferences of the Indian car buyer. Unlike the previous unit, which had a chrome element only at the top, the new design wraps the entire grille with chrome. The top portion of the grille extends down into a trapezoid connecting the upper and lower ends of the grille. The big Toyota logo now sits in the middle of the central trapezoid. In our opinion, the new grille isn’t just more chrome laden, but somehow manages to give the face of the Etios a more complete look. 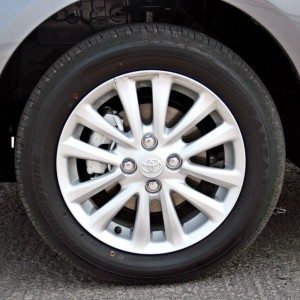 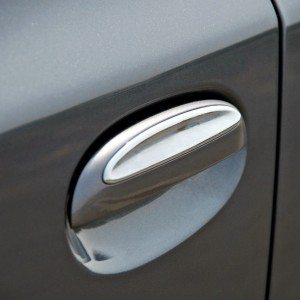 The twelve spoke 15 inch wheels on the car are new, too, and look rather good. Also, the door handles now have a chrome element. Toyota have also introduced a new Pearl White color for the new Etios. For those looking for some extra zing, Toyota is also providing a whole bunch of accessories. There are two accessory packs to choose from – Real Luxury and Decor 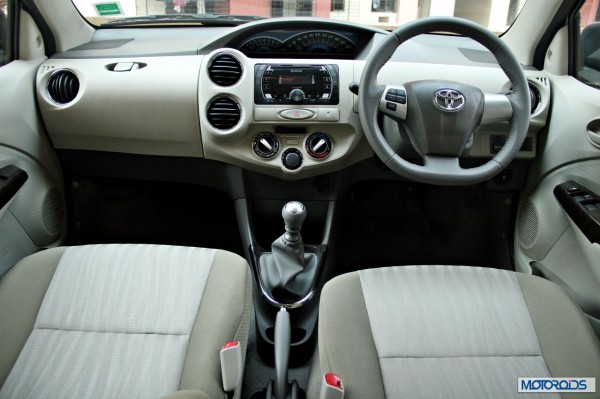 On the inside, the 2014 Etios gets some nice cosmetic and feature related changes. The armrests are now finished in a darker shade of faux wood, and look rather nice. The cabin also gets electrically adjustable ORVMs, and a chrome lining for the base of the gear shifter unit. 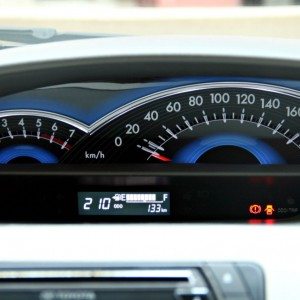 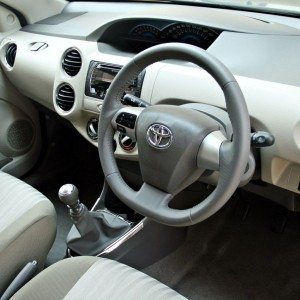 The 2013 Etios Liva release last year incorporated significant changes in the cabin. The color of the dashboard was made lighter for an airier feel, driver side seat got the height adjustment feature, the overall finish and quality of the materials inside the cabin was improved along with a few other nifty additions. All those value-additions are carried over in the 2014 version. These include a new seat fabric, a blue backlit center console with LCD display, digital clock, 2 new rear speakers in addition to the speakers in front, 2 DIN audio with Bluetooth, USB Aux–in and remote, steering mounted audio controls and a cooled glove box. Reverse parking sensors and warning buzzer for seatbelt, door ajar and headlamp are also some features which have been added to the car based on customer feedback.

With the new 2014 Etios, Toyota have also done something which the rest of the industry should emulate. All of us know about the recent zero star rating awarded to the Maruti Suzuki Swift and a variety of other entry level cars by Global NCAP. To ensure the safety of the occupants in its cars, across the range Toyota is proving twin front airbags as standard. 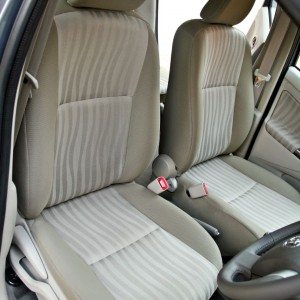 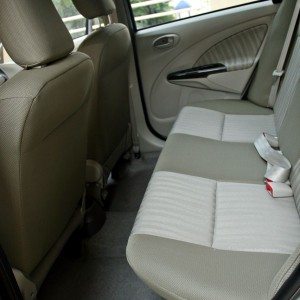 The Etios, as always, excels in terms of cabin space and comfort. The big, wide seats, both up front and at the rear are quite luxurious for the price you pay for them. Improvements in the comfort, support and quality of the seats have also been carried out in the past year to match the customer expectations. While the front headrests, unlike some other cars in the segment are fully adjustable for height, the rear units are not. The rear headrests are high set, though, and should provide some protection against whiplash injuries in case of a rear collision. 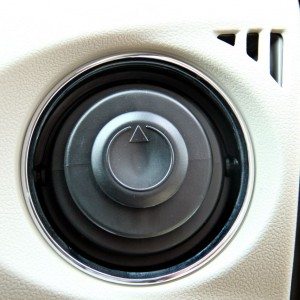 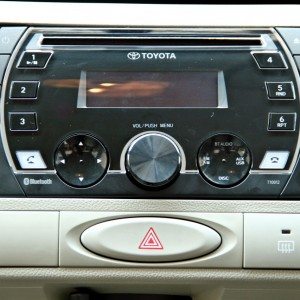 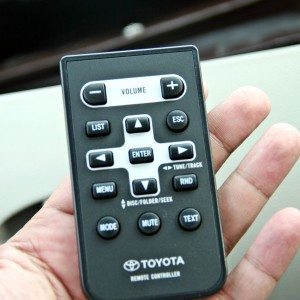 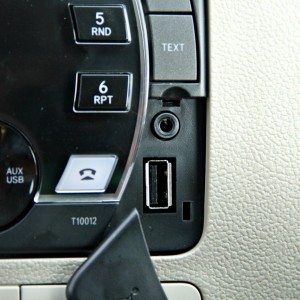 Although we aren’t very fond of the centrally mounted instrument console of the Etios, and think that the layout could be improved for better appeal, the overall quality and finish inside the cabin is satisfactory. Those unique A/C vents, though functional, could have been easier to use. The Audio unit doesn’t gel very well with the rest of the cabin, and though feature laden, doesn’t present itself as a very intuitive unit to use. It takes some time getting used to. The sound output, though is good for the segment. 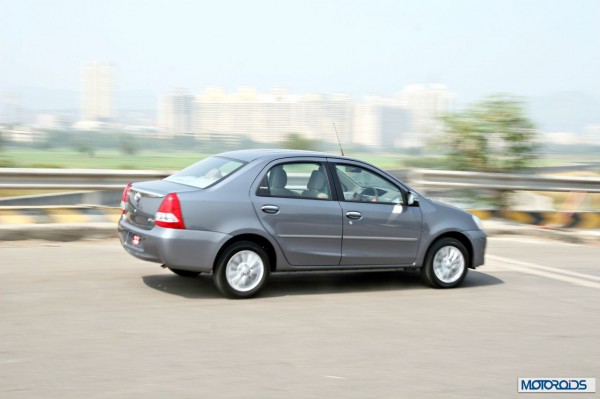 Next page for Performance, handling and verdict>>>

The biggest change on the Etio cars has been the way they feel while on the move. The original lot of the Etios cars felt somewhat flimsy, with a lot of ambient, road and tyre noise filtering into the cabin, thanks to the lack of insulation. Toyota have taken that aspect of the car’s behaviour very seriously and the new Etios cars have been fine tuned with subtle changes made to the suspension and other underpinnings. The blokes at Toyota have also padded all the places that matter to make the Etios feel like a better built, better insulated and somewhat more planted car. Heavy noise insulation can be clearly seen under the bonnet and under the bootlid. The changes related to the underpinnings have helped minimize the intrusive noises and vibrations, and it really shows when the car is on the move. 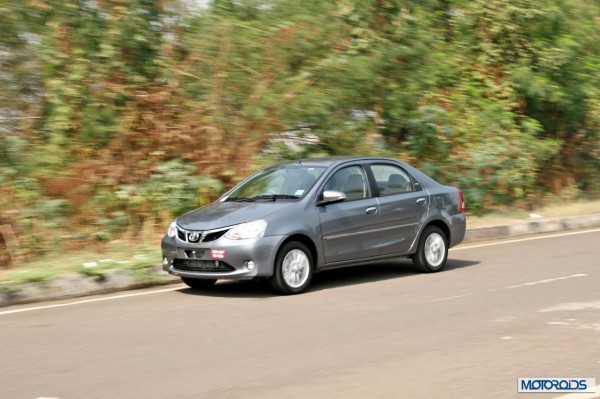 Driving the new Etios around the broken tarmac of Mumbai, with paver blocks and ribbed concrete surfaces thrown in generously, we felt a marked difference in the way the car feels while traversing uneven surfaces. The Etios feels much more mature, composed and shielded from the external disturbances in its newer avatar. It feels like a bigger car than it previously did. 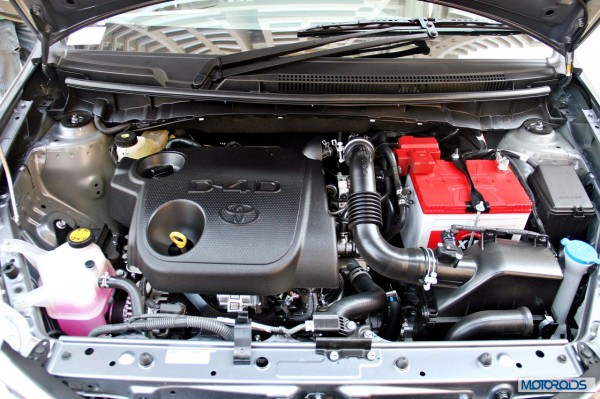 We drove the Etios 1.4 VXD, which is the top of the line diesel variant. The 1.4 liter diesel engine of the Etios is one of the most useable and practical oil-burners in the segment. It’s uncannily linear in terms of power and torque delivery and makes for an effortless driving experience in the city. Power and torque output figures stand at 68PS @ 3800 rpm and 170 Nm @ 1800 rpm respectively. The ARAI fuel efficiency figure for the car stands at 23.59 kmpl, which is one the highest for the class. 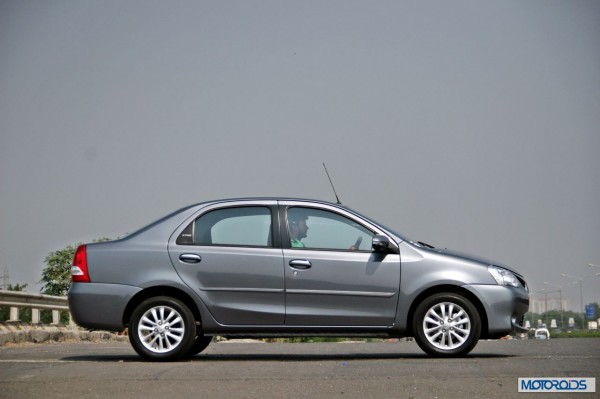 While the engine output figures don’t look too strong, the Etios doesn’t at all feel underpowered. The low and mid range performance of the engine suits the slow to medium speed city traffic perfectly and using this car for an everyday commute to work should be a breezy affair, unlike some other turbo diesels in the segment which need to be kept on the boil by way of frequent downshifts. There is sufficient shove available from 1400 rpm onwards, post which the momentum keeps building in a linear fashion.

The engine doesn’t have much in reserve in its upper band, though. It doesn’t like being revved hard, and isn’t the kind of unit which would make you the fastest thing on the highway. It spins comfortably in the 2000-3000 rpm zone, offering a healthy supply of torque, allowing for reassuring in gear acceleration and a hassle free practical driving experience at cruising speeds. 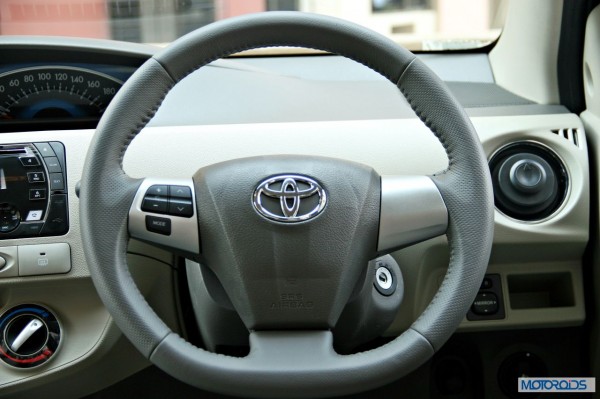 The flat bottom, small steering wheel is a delight to hold and operate. It’s probably the chunkiest, and comfort-wise the nicest steering unit in the segment. It’s light, though, and doesn’t radiate the most reassuring feel. Manoeuvring the car in tight spots is a breeze. The steering weighs up with speed, but not enough to elicit appreciation from enthusiasts. It’s practical, nice to use unit, though not meant for those with sporty intentions. 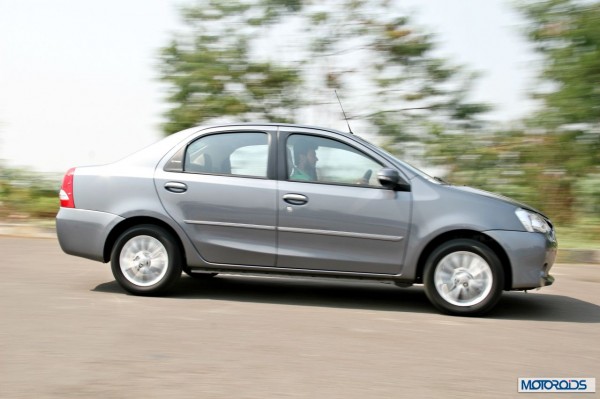 The suspension offers a good balance of poise and absorption. As mentioned earlier, changes made to the Etios’ dampers have made the car feel more sorted and composed. The noise from the suspension has reduced drastically and the ride quality has improved significantly. The suspension also does a decent job of endowing the Etios with a good straight line stability and decent poise around corners. The Etios isn’t an enthusiast’s car though, and not meant to be hurtled around with disdain. There is some body roll to be experienced, and if sheer dynamic ability is something you are looking at, the Etios isn’t the best choice. 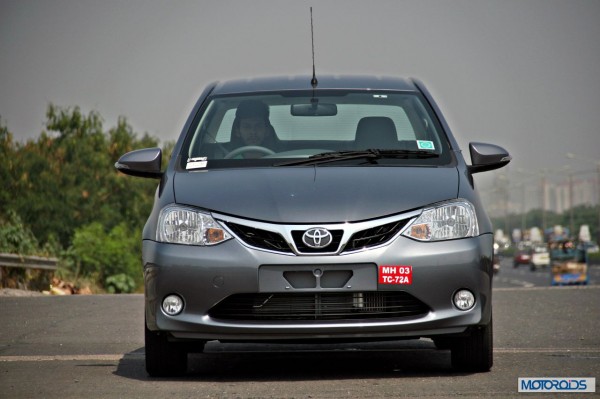 So should you buy the Etios diesel? Well, to start with, the Etios is slightly more expensive than the other options, including the Dzire, Xcent and Amaze by about Rs 1 lakh. However, the Etios isn’t a sub-4 meter, chopped down sedan like the other cars in the class. Nothing, and absolutely nothing in that price range matches the Etios in terms of interior space and comfort. With the new grille, the car looks a bit more appealing to us, though the matter is entirely subjective.

Also, the Etios is the only car in the segment which comes equipped with dual airbags even in the base variant. For those who care for safety, that feature by itself should work somewhat to neutralize the price difference, at least in the base variant. 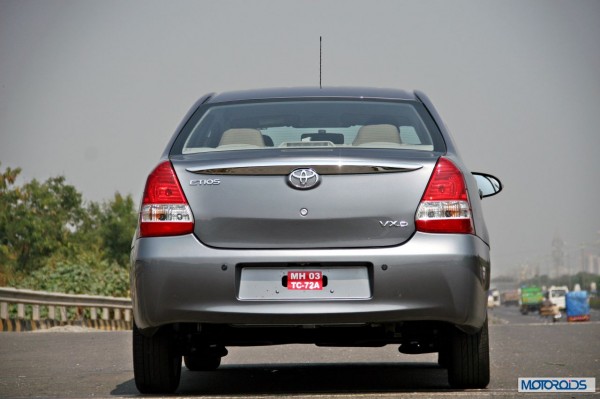 The most important thing, however is that the Etios, in its current form, is a much, much more improved product than what it was a couple of years ago. We had our own reservations, based on our first experience with the car. And we were absolutely astonished with how different and matured the new Etios felt as a product for the segment. We genuinely found the new Etios as a car worth recommending to friends and family this time around.

Finally, there is the reassurance of the Etios being a Toyota. It’s built solid, and would require the least possible trips to the service station. Toyota’s service, though not the most widespread, is probably the best in terms of quality and customer satisfaction. They have some of the most faultless processes in place and their overall score in the customer rating surveys in India has been immaculate.

The Etios isn’t a fancy looking car, nor is it the fastest or the best handling. It is however a very comfortable, spacious, practical and reliable car in its current form, with low maintenance and running costs. So if a practical, spacious, hassle free car is something that you are looking for the Rs 6 to 8 lakh price bracket, we strongly recommend you take a test drive of the new Etios. 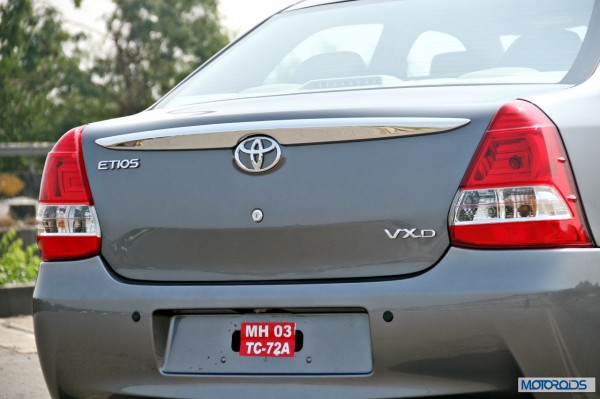