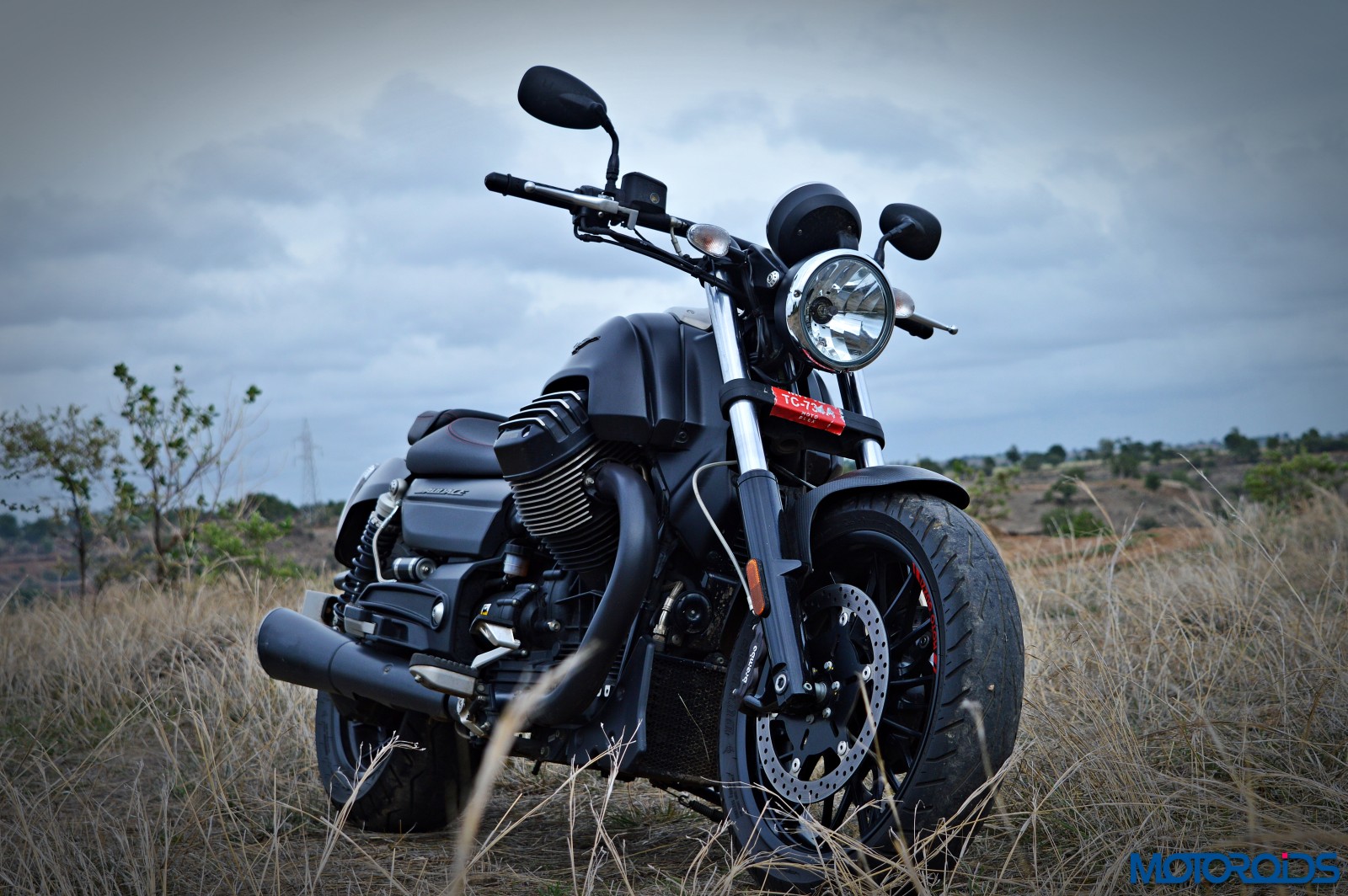 It’s early and still dark outside. Prepping for a shave, I discover a solitary grey strand in my beard. Now, when such things happen for the first time, they tend to make you pause, get somewhat somber and ruminate about slowing down in life. To make matters complex, the weather outside is playing all its romantically wet tricks to sedate my day. So after riding some ridiculously fast machines over the course of summer, this morning I happen to use my mum’s plucker to defy signs of aging. Moments later, I find my usually bent knees stretched out in an LWB Czech sedan’s back seat. 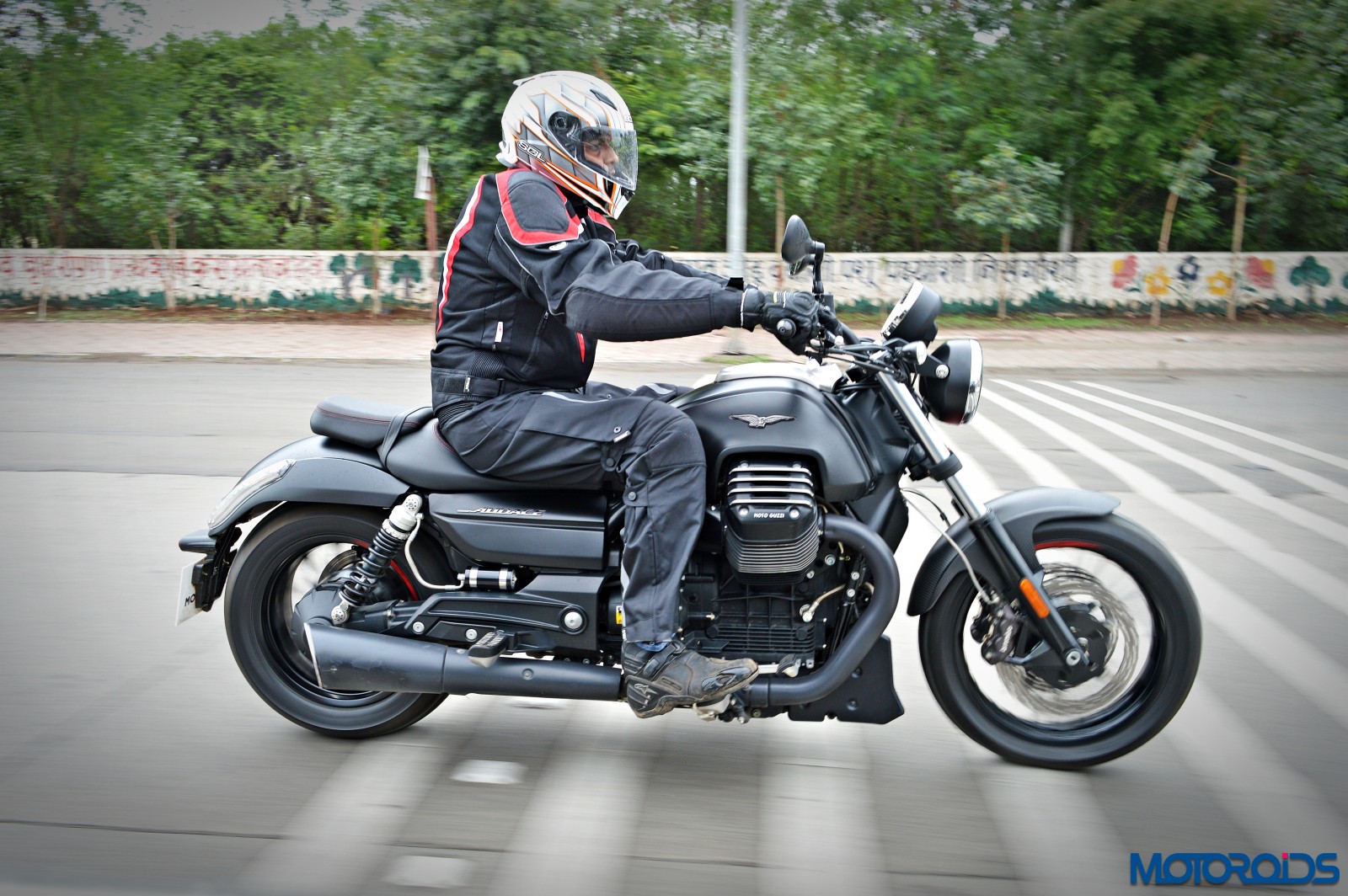 Maybe it’s destiny’s design, to unconsciously make me realign my mind and body to ride a motorcycle whose seating position mimics that of the car I’m being chauffeured in. You see the trouble is, for some, lazy looking, stretched out machines somehow don’t invoke enough twist in the right wrist to make some happy endorphins travel towards where it matters within the body. But then I get forcibly pulled out of the car, a crash helmet and everything else gets flung towards me, the door slams shut in my face, and in the distance, I see a Moto Guzzi Audace smeared in a devil-may-care attitude. 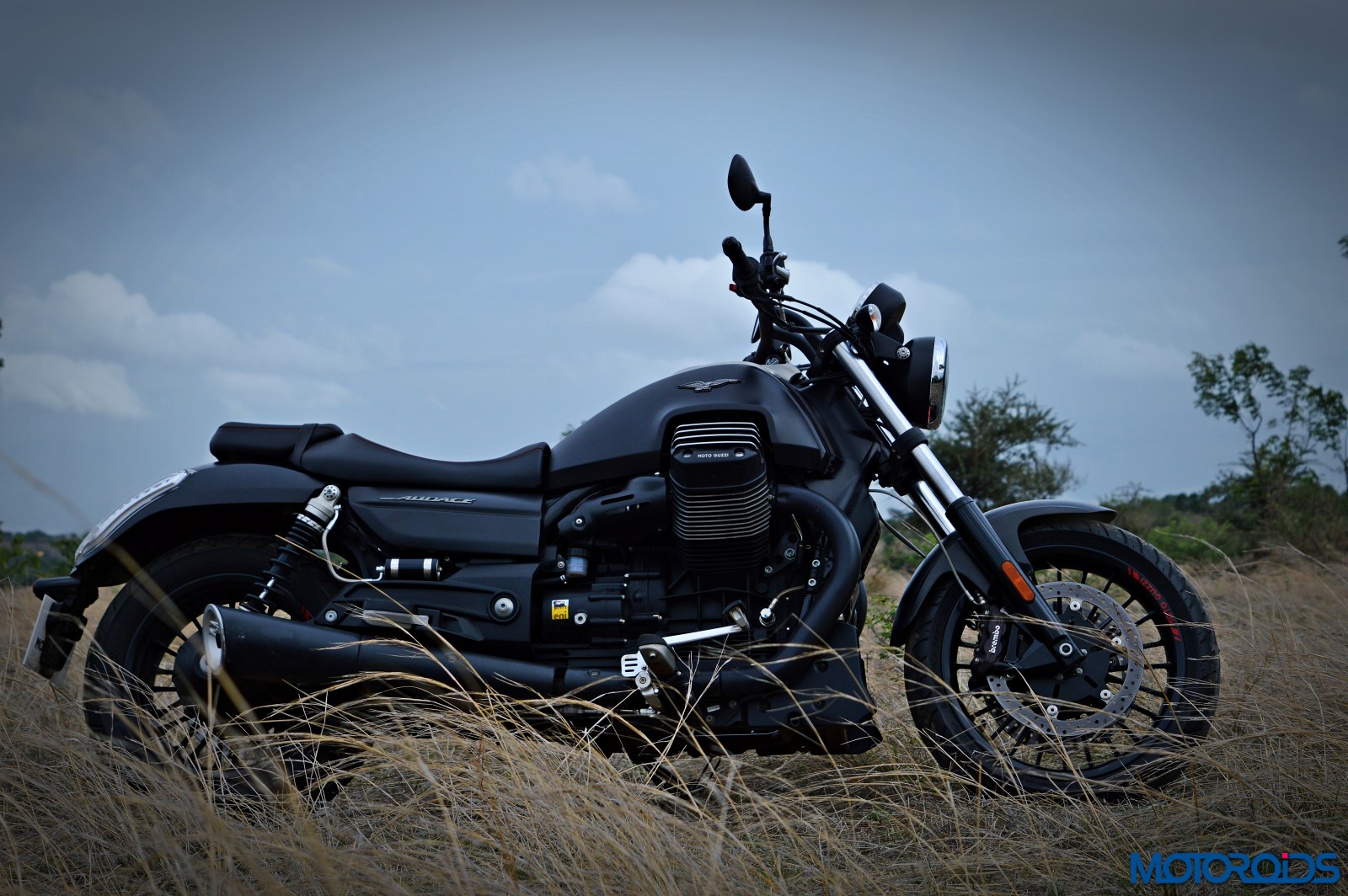 It’s lengthy as a 15-coach Mumbai local and pushed forward by an immaculately finished 1400cc heart that looks like it’s been pulleyed straight off from Deutsche Bahn’s retro rail yard and bolted onto the frame. I start off by taking my walk of acquaintance around the stationary bike and figure that my footprints have come full circle with a rather large diameter. Although somehow, in entirety, the Moto Guzzi Audace doesn’t seem to carry a typical cruiser bloodline. There are obvious traces of that DNA, but with that wide, flat handlebar and two cylinders forming a pair of wicked horns under the tank, it looks more like a fast custom dragster. Only that it reeks of finesse that comes with something that has been built in a factory and not at a biker build off. For all those of you who think this one’s a cruiser, make one thing absolutely clear in your minds – it’s not! In fact, it’s nothing like anything you’ve known, seen, or ridden before. And we’ll tell you why, very soon. 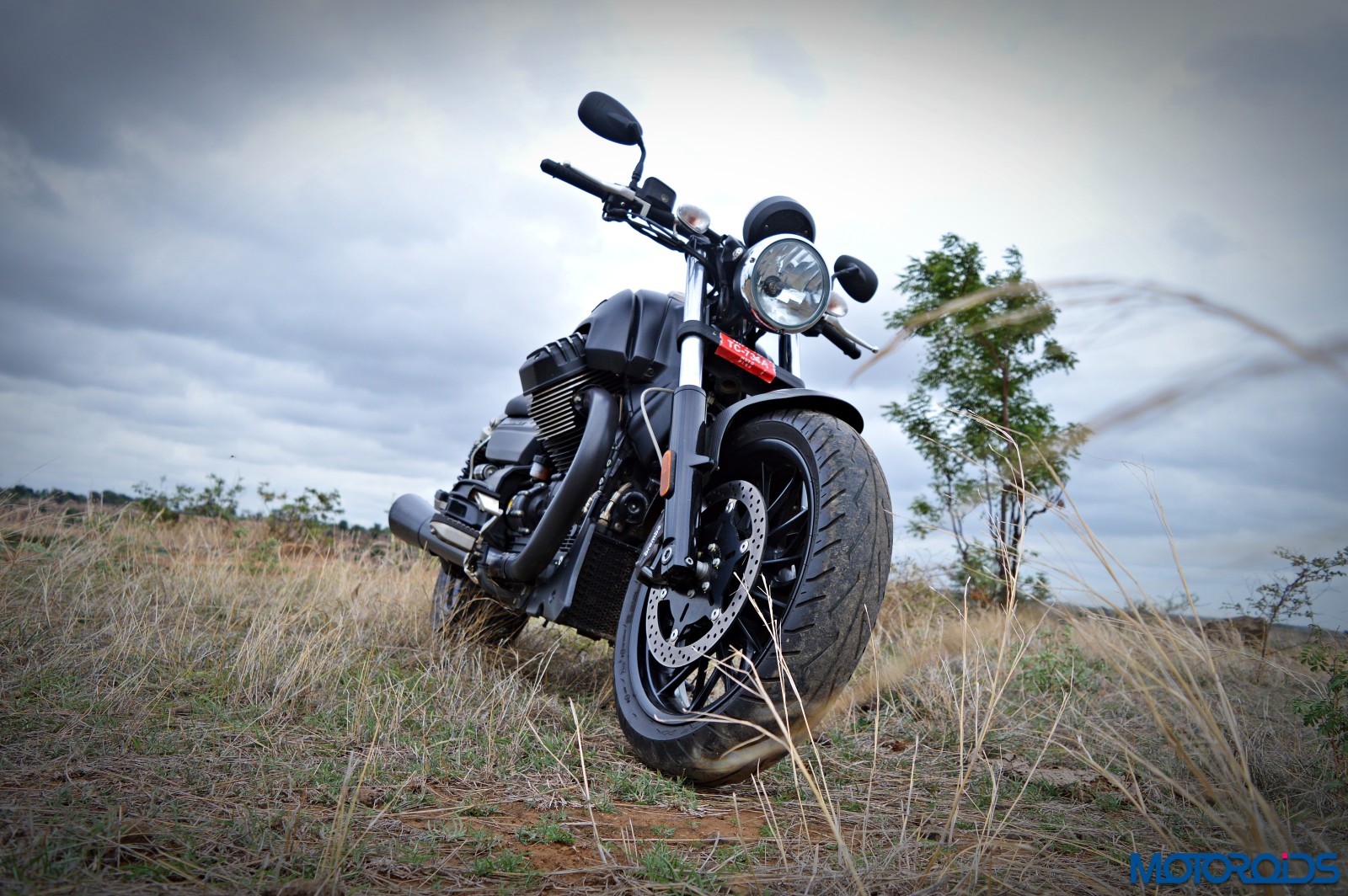 Still coming to terms with all that girth, I notice my eager pup colleague get atop and fire the Guzzi to life. The loose flesh near his thin triceps wiggles violently as the motor wakes up from its slumber, rocks the bars from side to side and lets off a little bark from its twin megaphone exhaust. Intrigued by that sight and the Audace’s darkly evocative presence, I empty my bin of lazy thoughts about big fat bikes, kit up, ask my colleague to get lost and get astride the motorcycle. As I thumb the motor to life, any remaining leftovers of my reservations are shaken off by that induced shiver from the handlebar. At this point, my left foot is expecting a loud clank like one experiences on things from America. But then with a slightly pronounced clicky-clank into first, a gentle release of the slightly heavy clutch and power smoothly transmitting to the rear wheel through a shaft, the Audace chugs into motion. 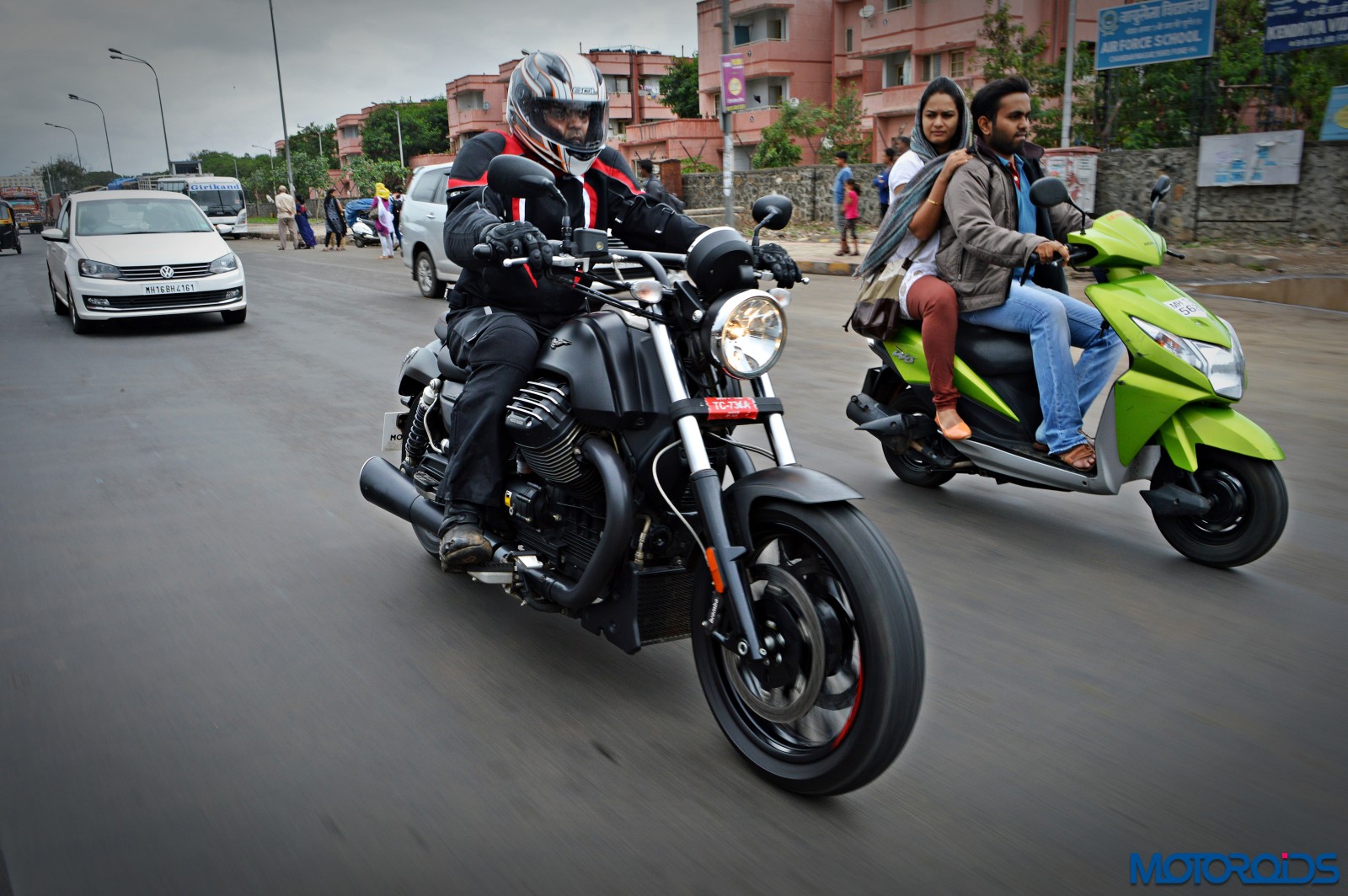 A few meters out of the dealership, traffic and turning heads greet me. People are straining their necks, pointing fingers and stretching their jaws at the sight of this machine whichever direction I look. I secretly enjoy the attention and clear the clog with utmost ease. The Audace is fairly easy to maneuver that way. It’s just that when you’re stationary, the heat from the longitudinally mounted engine will make you want to shift your bottom towards the rear seat and move your legs away from the motor, which turns into a boiler when it finds itself cuffed in start/stop scenarios. 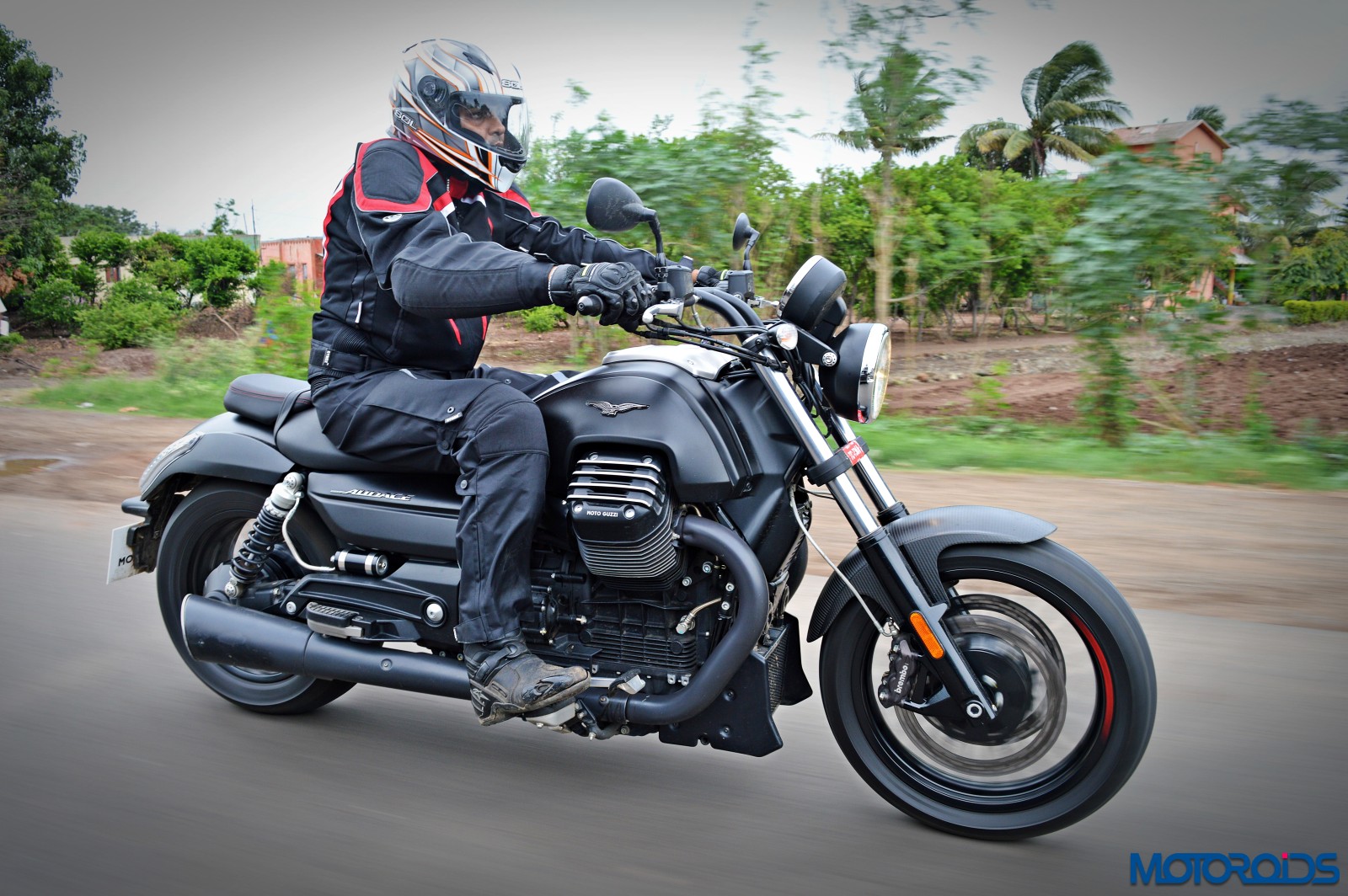 The seating position making me feel like I was aboard a kite surf, traffic clears and I am suddenly riding a 121 Nm wave of torque that peaks at an accessibly low 3000 rpm. But that’s not it. A bigger ripple of 95.2 bhp awaits at 6500 rpm. Which means the Audace will let you enjoy its punchy mid-range gust, but should you feel like riding the crest of a wave, you can rip it till its 7000 rpm limit. And that motor swings and the exhaust subtly pops and crackles to your tunes when you do that, rather than protesting like a push rod playing a broken record. The gearbox acts as an accomplice while you’re at it and lets you revel in on this dark horse, allowing smooth and quite precise shifts. If you simply wish to putter around though, the Audace requires you to keep the revs slightly above the pits. It’s not your typical cruiser that resides in the sub-5000 rpm Underworld. The Audace has a life that revs up in the clouds and that does hamper its capability thrust ahead when the engine speed isn’t flying. You do get to hear some splutters below 3000 rpm, beyond which the Audace builds engine speed which is all sportsbike and no cruiser. It’s a Ninja caged in the body of Sumo wrestler, a Sportsbike under the veneer of a heavy roller.

This Guzzi is wired with a 3-stage traction control and three riding modes – Veloce (Sport), Pioggia (Rain) and Turismo (Touring). Throttle response is immediate if you’ve switched to Veloce and big numbers come up fast as the motor lets you thrash it like a teenager right till its rev limit. However, things mellow down substantially in rain mode, so much so that you hear some hesitant knocks from the engine if you twist the throttle like its dry. Turismo finds the middle ground when you’re in the mood to ride into the distance at a comfortably brisk pace and you’ve even got a cruise control system that goes hand-in-hand with it. Oh and the way power is delivered to the rear wheel via that shaft, it’s like that drivetrain’s been dipped in fondue. Does it guzzle? A little, yes. But with a 20.5-liter fuel tank and an economy figure of 10-12 kpl, the Audace will cover enough distance before it starts feeling thirsty. 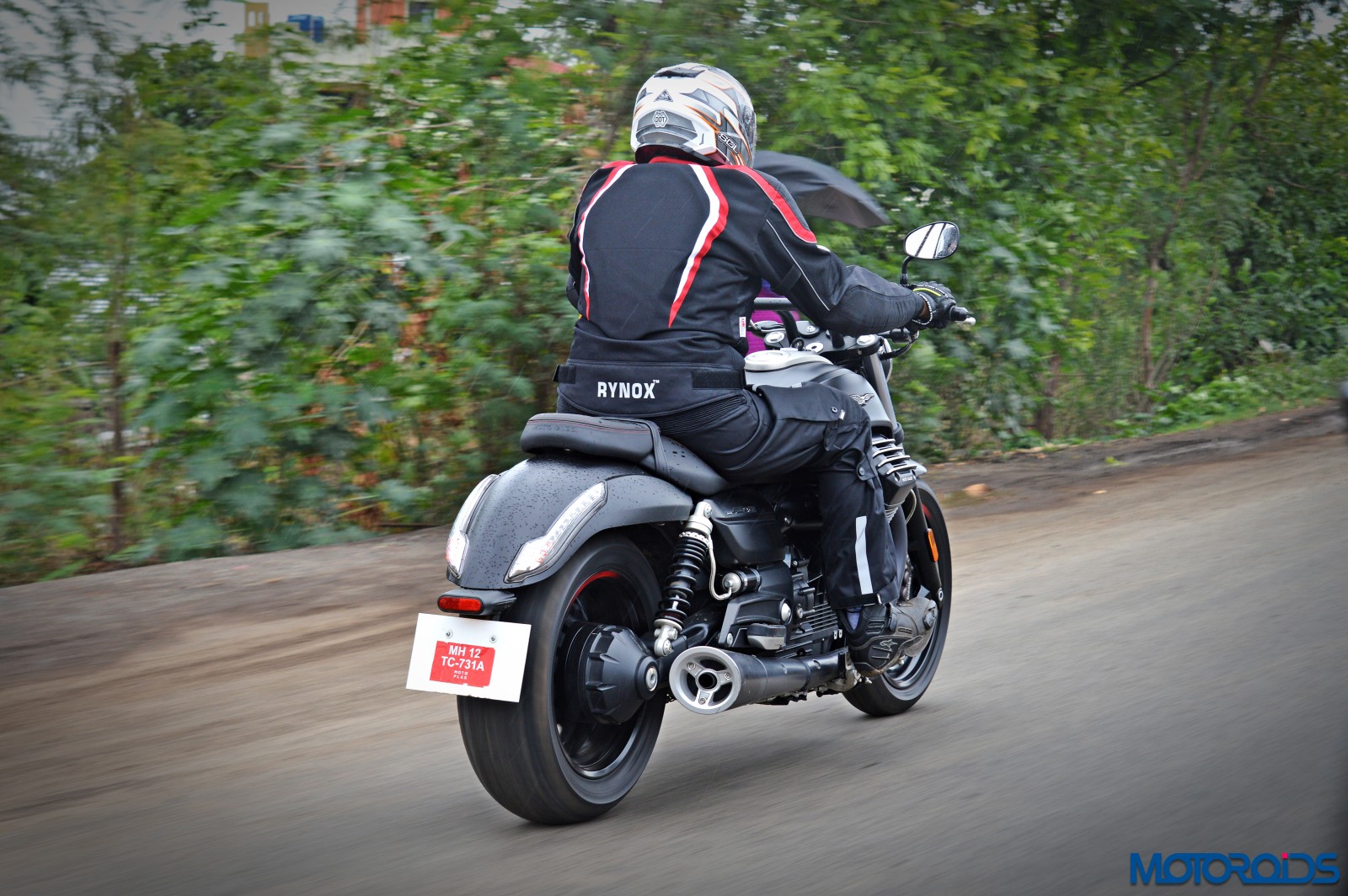 By now, you must be thinking that for its length and a kerb weight of 299 kilos, this Guzzi must be lairy around bends. But no. It carries its railway qualities to the road and stays put even when you’re aggressively pushing it around longer curves and there is quite a fair amount of clearance before you can drag the pegs. The conventional suspension system on this bike has been set to ride slightly on the firmer side. But the flowery trade off is that the rear won’t wallow like a belly dancer or bottom out over undulations when tackling curves if you’re pushing it. Even when two up, that behavior stays intact. Should you wish to change that, gas charged rear springs can be adjusted for preload and rebound. 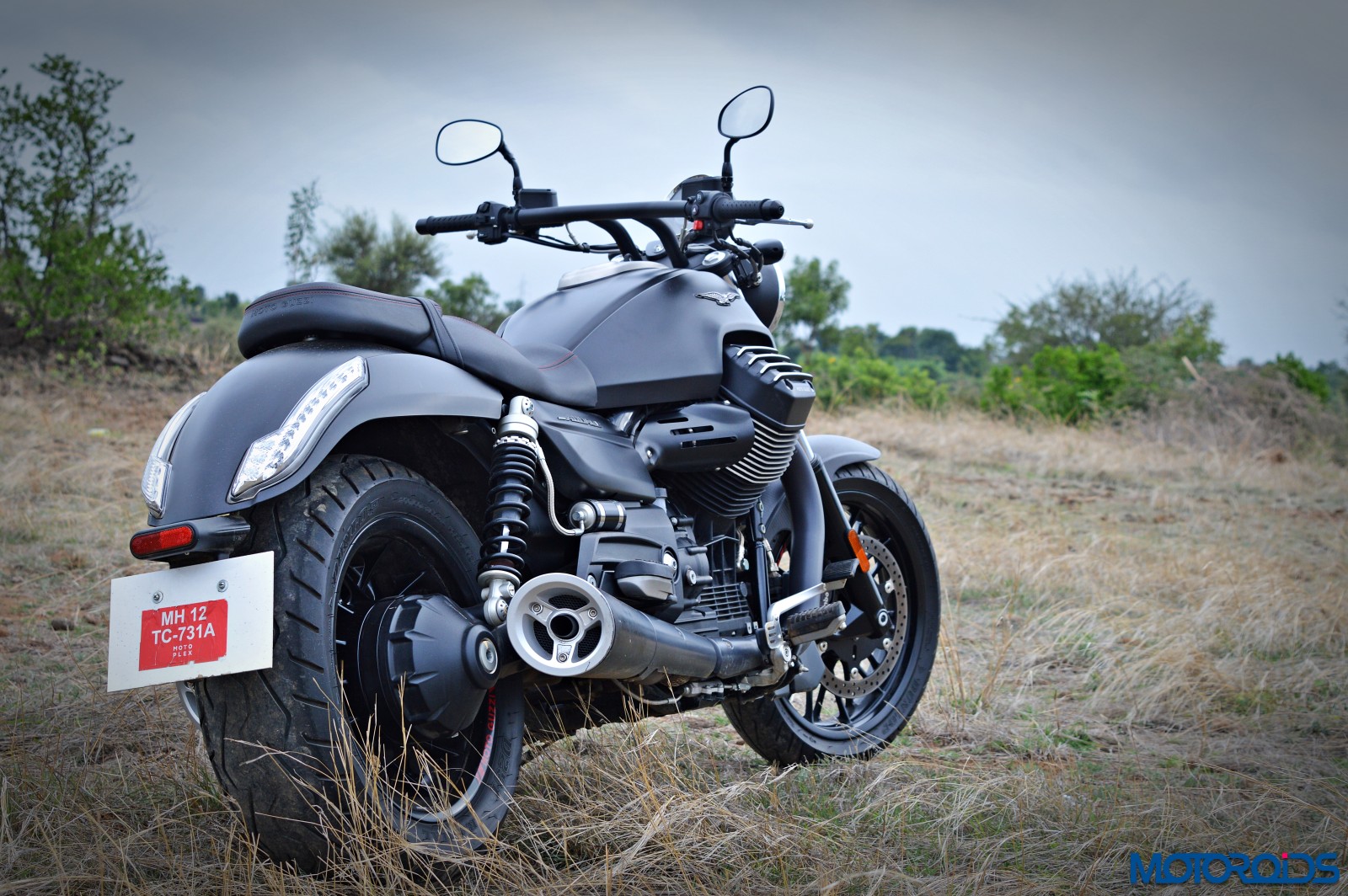 The closed double cradle frame has the already smooth 90° V-twin engine firmly mounted on elastic-kinematic mounts which irons out any remaining vibes and lends the Audace with a solid poise when you’re gunning it straight up. What about tighter sections? Look elsewhere if your idea of fun on a motorcycle is woven around bends. Spoke patterned 18″ front and 16″ alloy wheels at the back come wrapped in 130/70 and a fat 200/60 Dunlop rubber respectively. The pattern is pretty rounded, which helps when you’re leaning the Audace, but the inherent trait of that fat rear rubber makes the bike want to sit up. Having said that, dynamically, the Audace is way superior than traditional cruisers for the way it rides and handles. 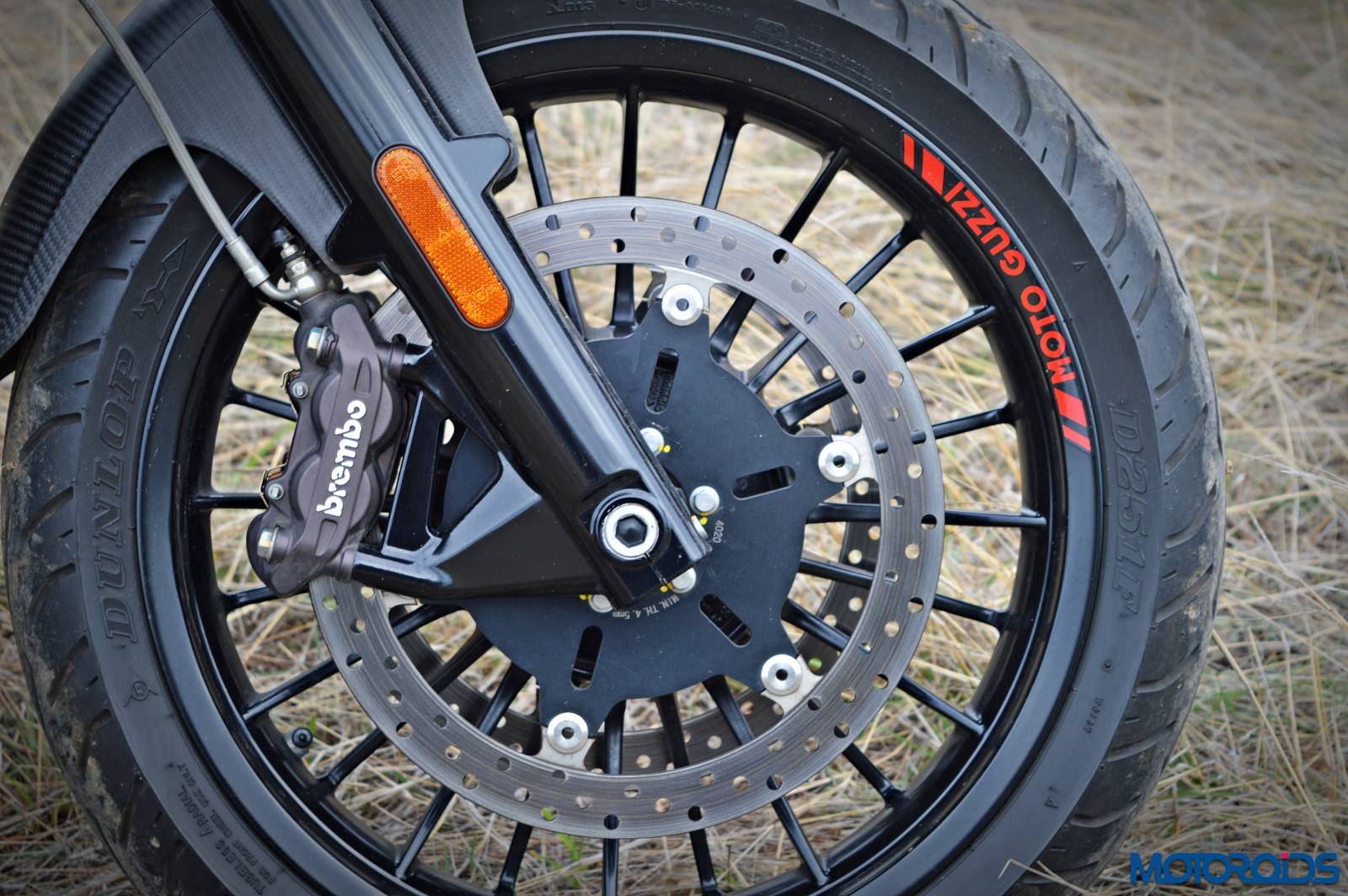 Twin 320 mm discs at the front are bitten into by high quality Brembo radial calipers with 4 horizontally opposed pistons, while a loner 282 mm disc with a Brembo floating caliper with 2 parallel pistons does its job at the rear. Aided by ABS, deceleration feels strong with a confident bite at the front which also signals back a reassuring feel of things at the lever. 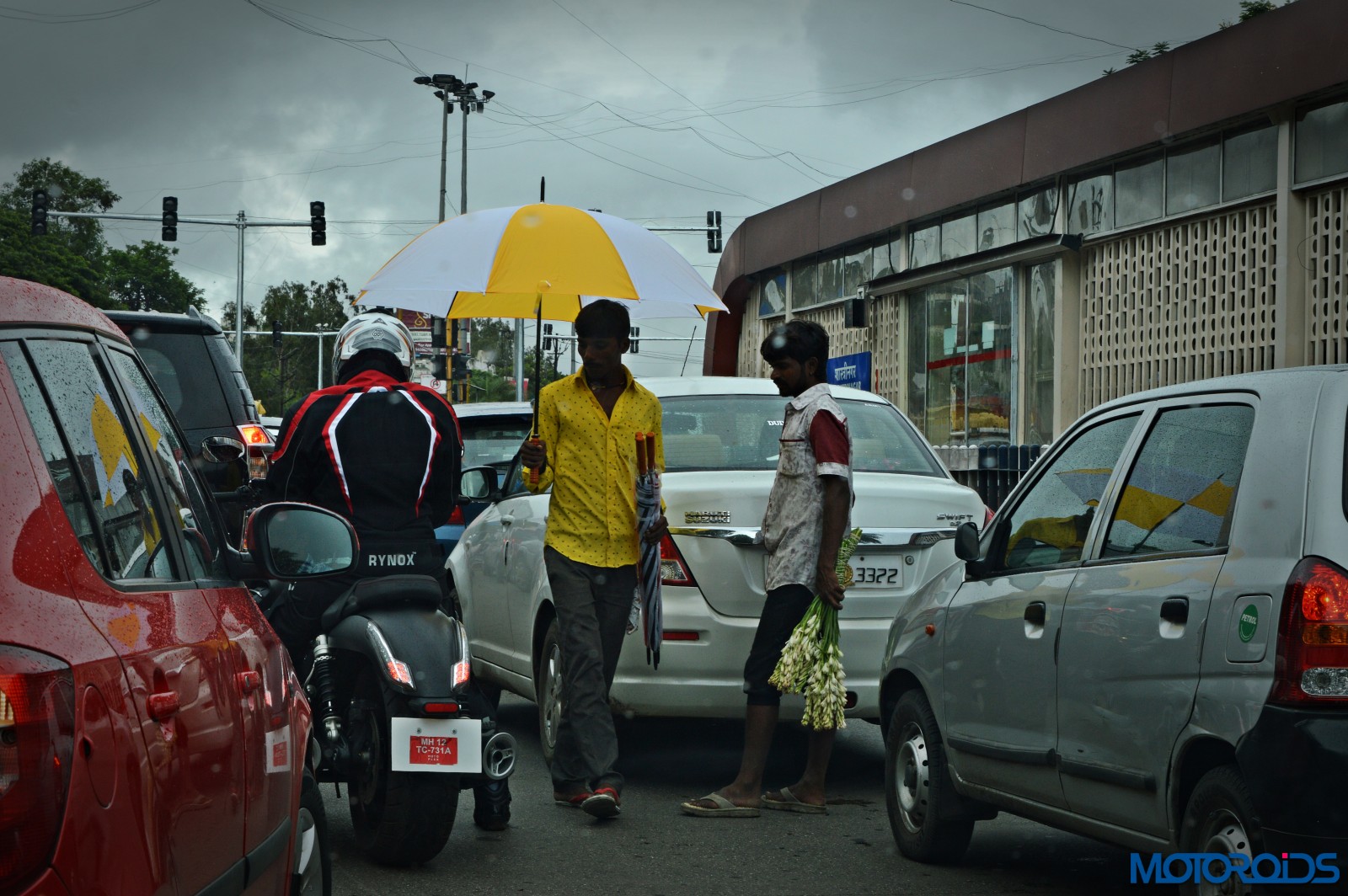 Almost at the end of my ride, I hit unusual traffic again and the underside of my thighs sarcastically ask if I was also carrying some salt and pepper. The bike on the other hand settles in an uneven idle when stationary and is perhaps enjoying all the attention. Although its longitudinal crank would twist and rock the chassis gently towards the right, like it’s feeling impatient to get back onto open roads again. I wish the Audace sounded more dramatic and a little louder to go with that dark appeal, but maybe that is how it should be. Maybe that is what Euro 4 does to sounds. But the machine has enough presence to make up for that slight lack of aural drama. 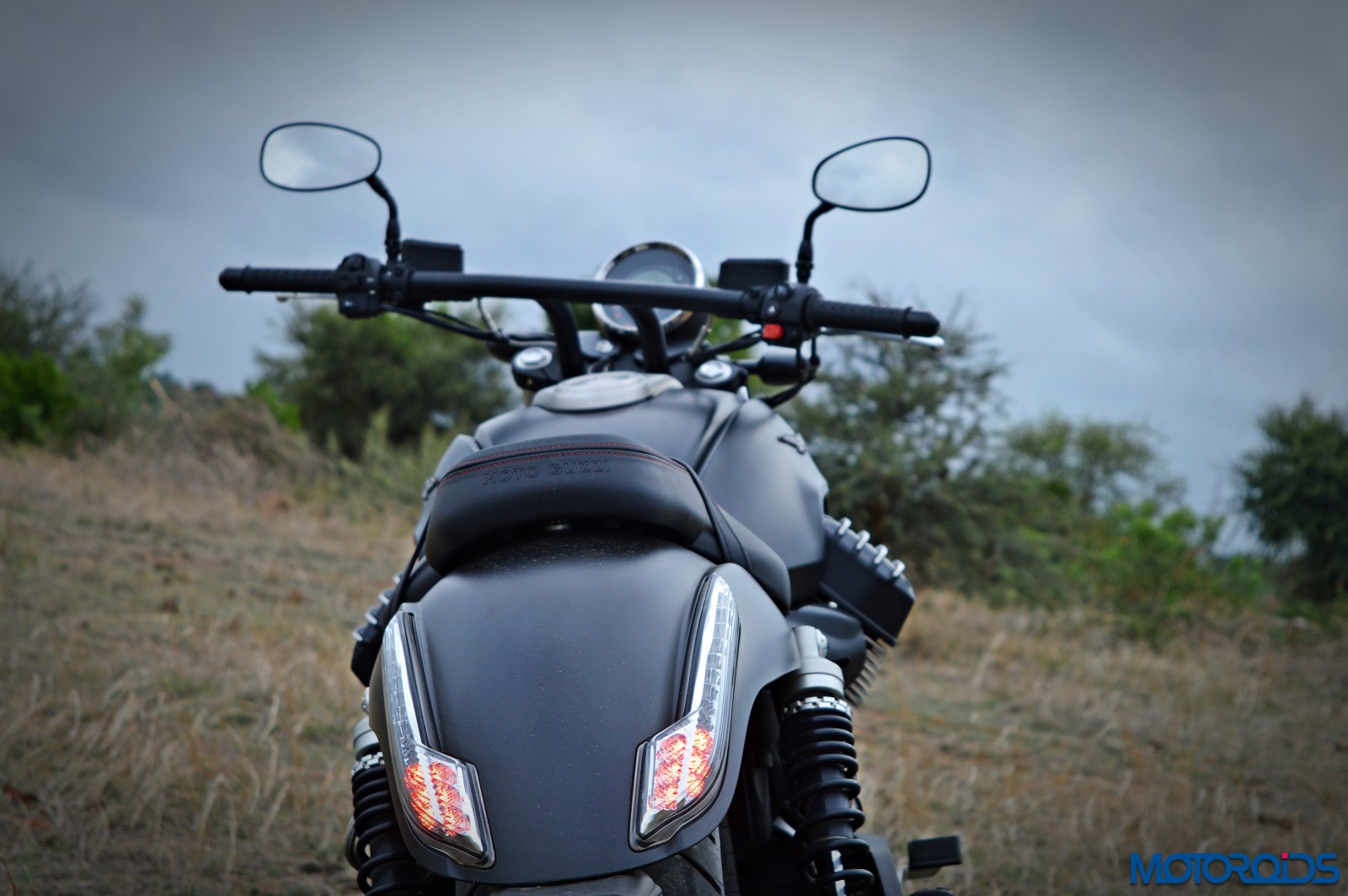 So after spending an entire day with the Guzzi, I come back with some learning – that motorcycles and motorcyclists are not to be stereotyped. But at an asking price of Rs 26,14,982 (On Road, Pune) that teaching demands a hefty fee. For me then, it’s a dream too expensive to keep. But for those who are living theirs, the Audace could be an affirmation of that feeling. Whether they’d be in its saddle, or admiring its massive presence in their garage. The best part is, it isn’t something that everyone out their rides in hordes to pointless festivals and chaotic group therapies. It is exotic, rare and just like your life’s journey, different.

Your dark side’s been scripted in your to be published autobiography, the Audace let’s you etch it on the road for the world to admire. Just try not being distracted by those fast Aprilias when you visit the showroom. Either ways, you’d attract a lot of flash bulbs for your choice. 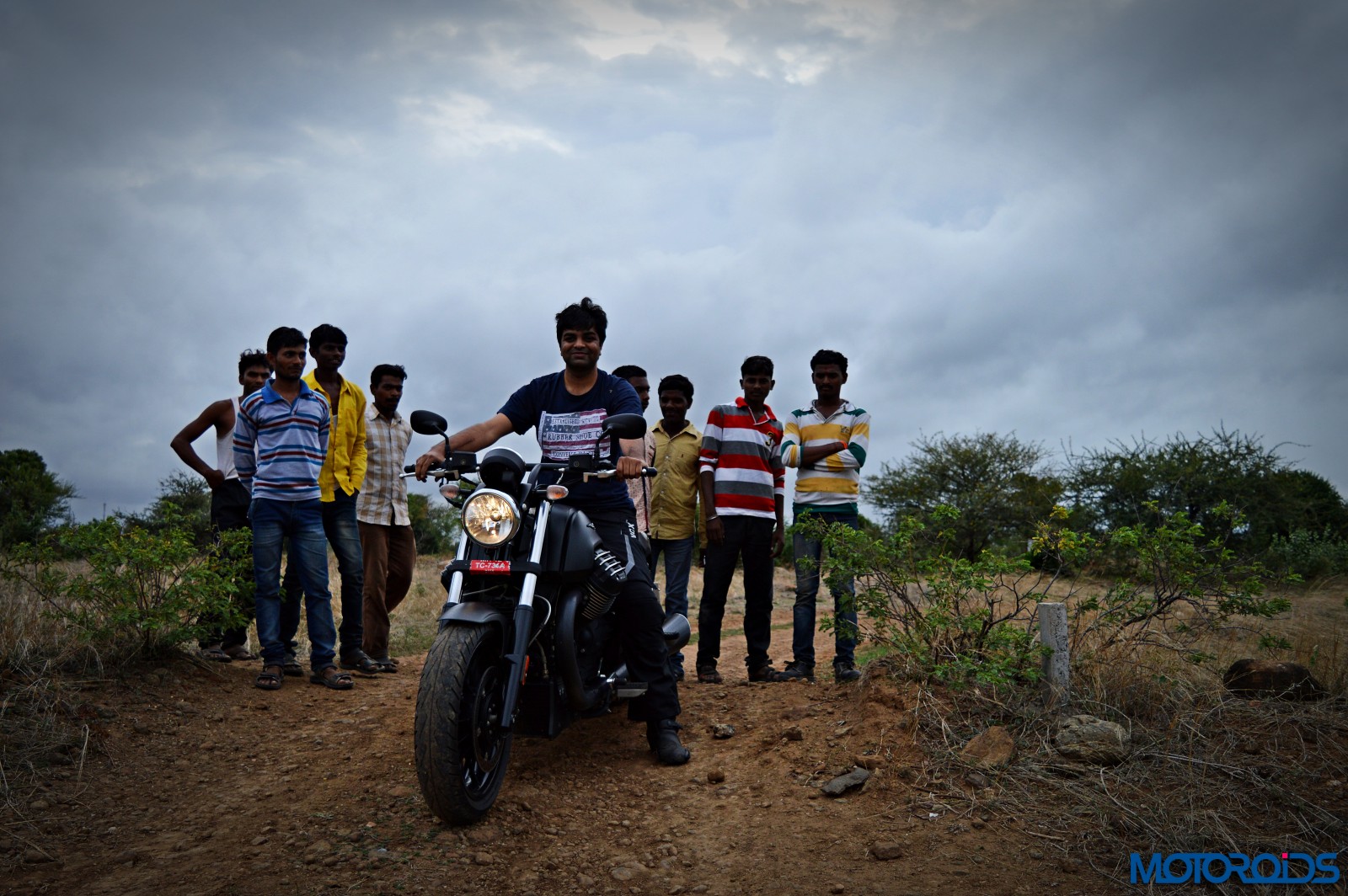 P.S: If such things matter and your paramount intent of splurging on things is to drop jaws and evoke wows. We observed countless women and men gesticulate in excitement at the sight of this machine. The Moto Guzzi Audace is a strong magnet that knows no gender bias and gracefully attracts feathered chicks, tall Toms, dirty Harrys and lazy Dicks. 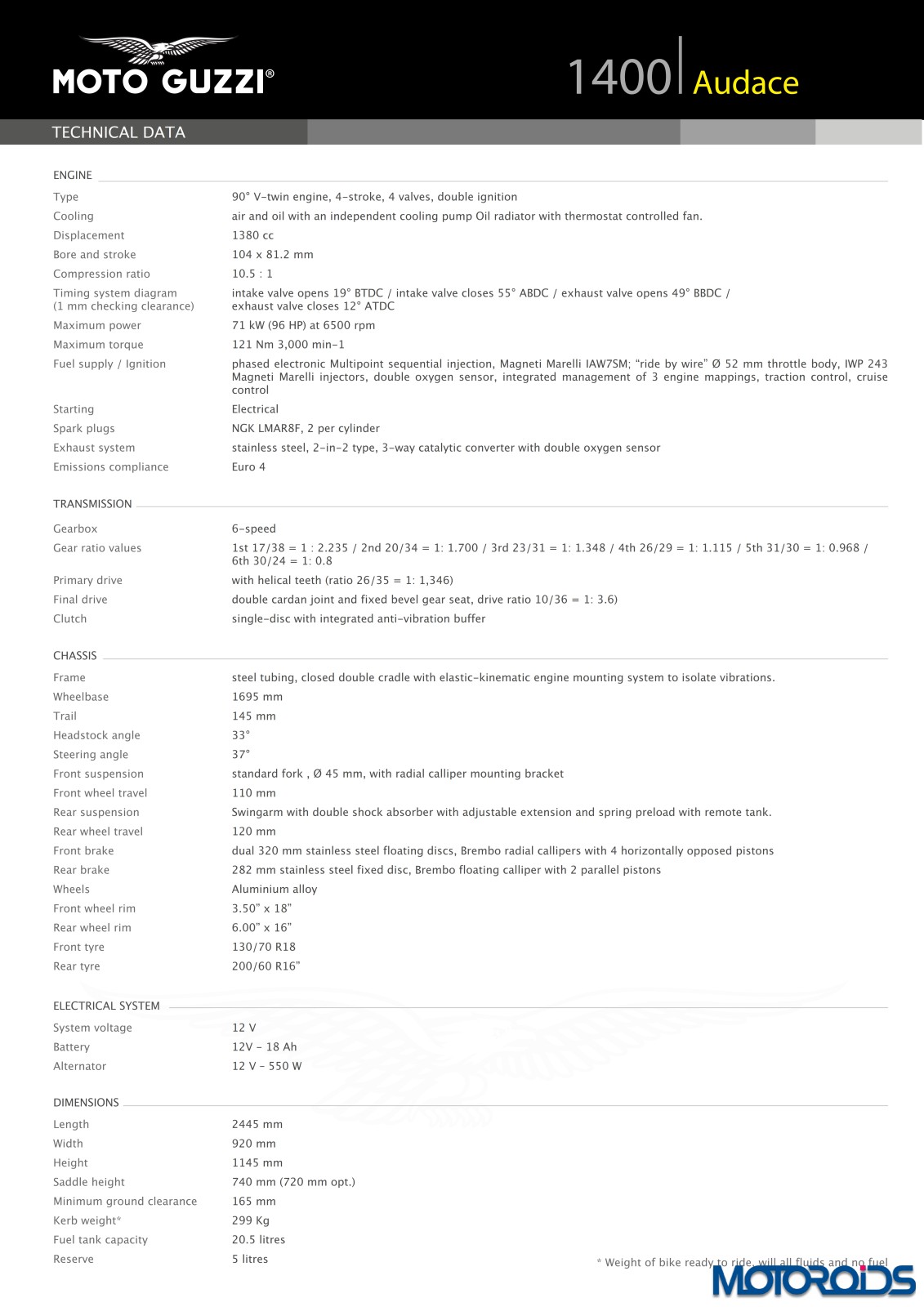 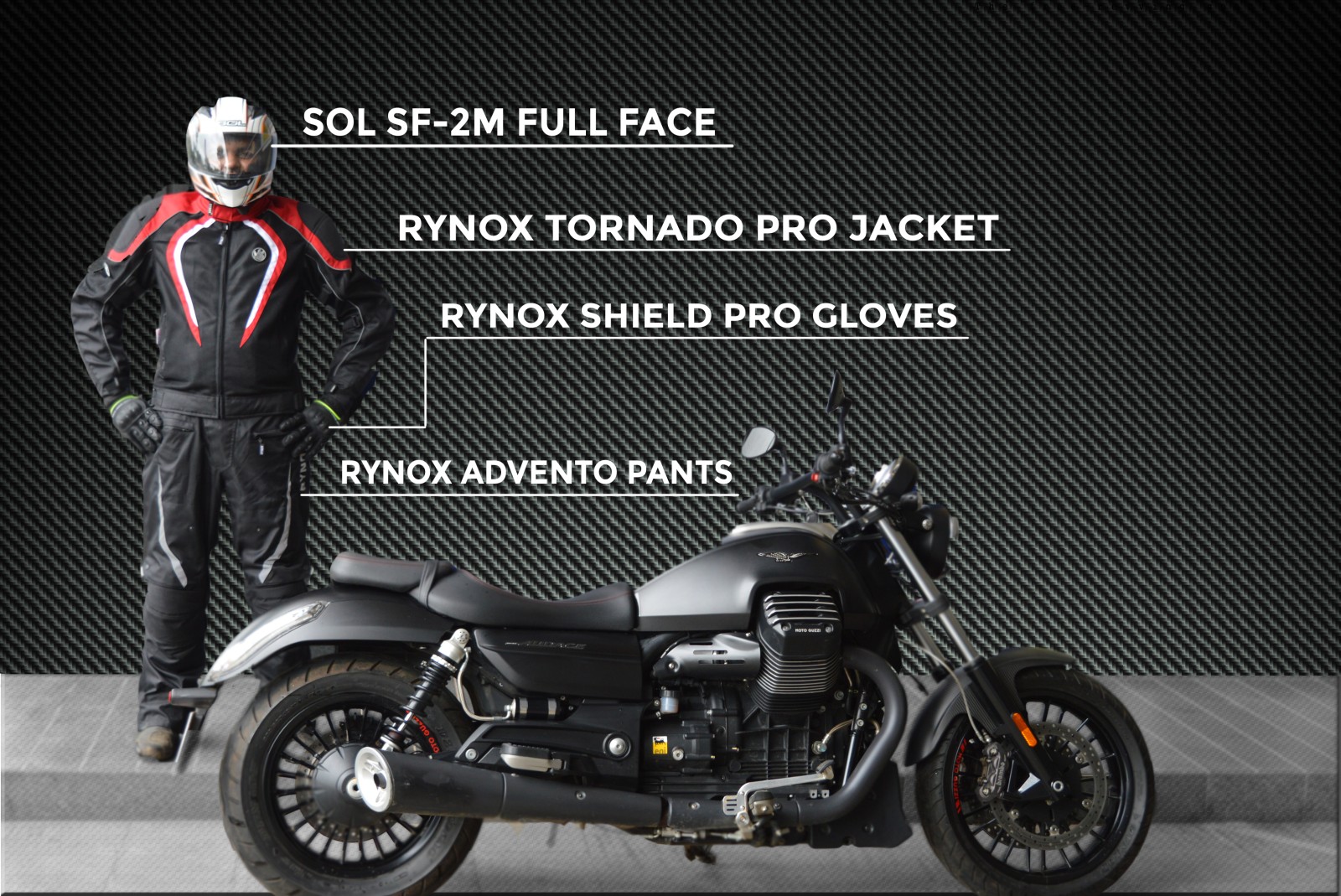