Just last month, Michelin invited us to experience its new Energy XM2+ car tyre at the Wabco Proving Grounds in Chennai. The new Energy XM2+ will be replacing the outgoing Energy XM2 car tyre range, providing customers with a new range of long-lasting tyres. Prices for the new Energy XM2+ will start from INR 5,090 and the tyre will be available across all Michelin authorized dealers in India. Read ahead to know more about this newly launched tyre and its performance in extremely wet and worn-out conditions. 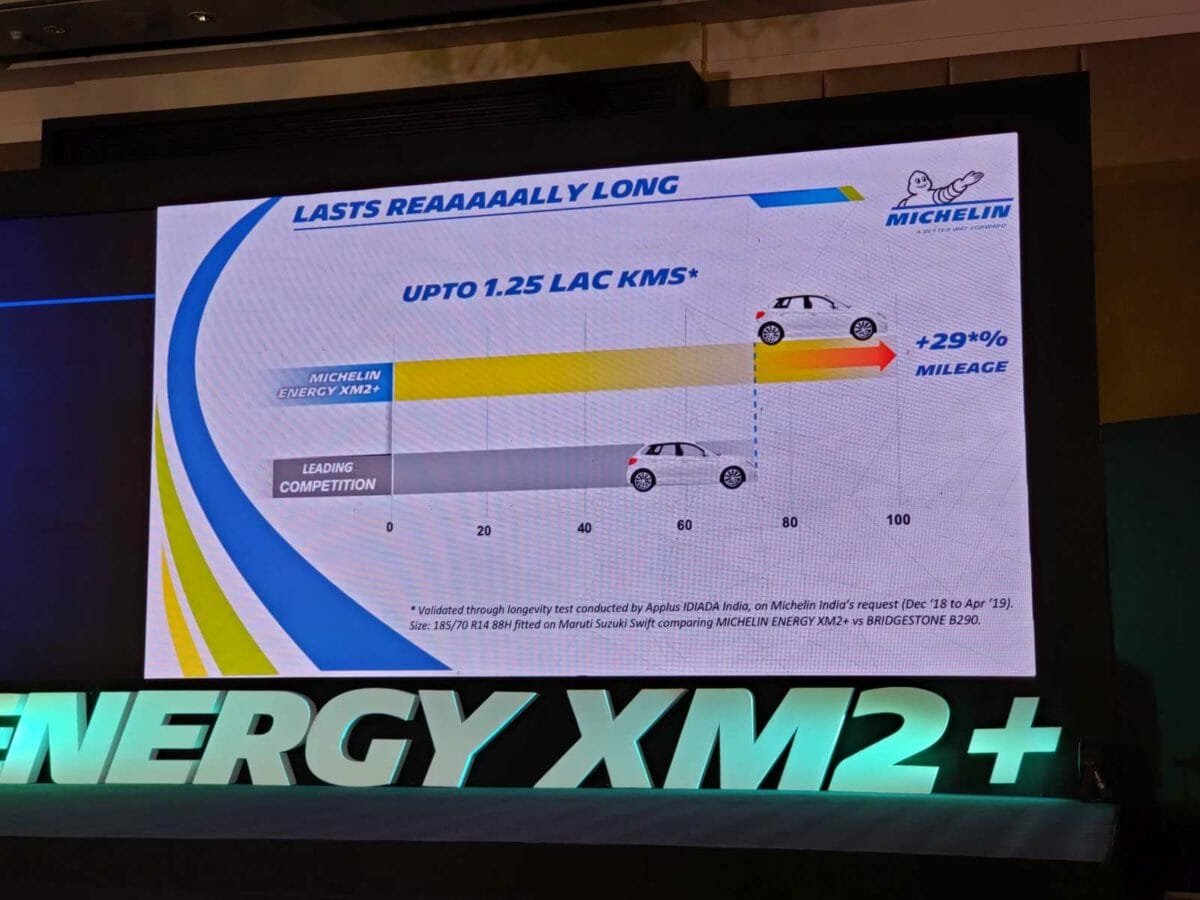 The new Energy XM2+ is Michelin’s latest range of long-lasting tyres, as it is built using a new full-silica rubber compound, that provides it with much shorter braking distance on wet roads in both new and worn conditions, as compared to the Bridgestone B290, its main competitor. These new tyres will also last 29% longer than the currently-available Energy XM2, thanks to its new rubber formulation and Alternate Bridge Technology that ensures minimized tread-block shuffling and a lower wear rate. This new tyre will be available in over 30 sizes ranging from 12 – 16 inches, meaning it can be fitted to a wide range of hatchbacks, sedans, compact SUVs and MPVs. 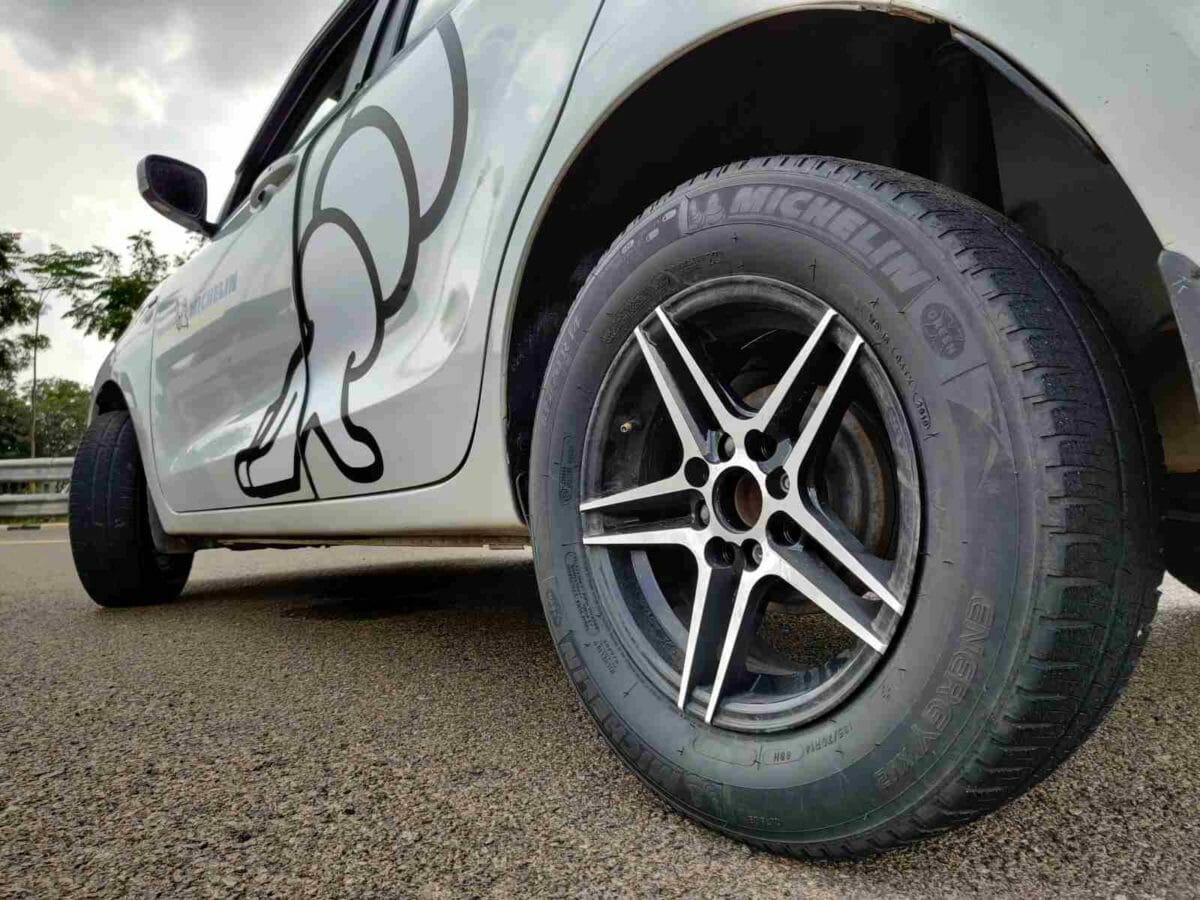 At the track, we got to drive three diesel-powered Maruti Suzuki Swifts, the first one was fitted with a set of worn-out Michelin Energy XM2+ tyres, the second one was fitted with a set of worn-out Bridgestone B290 tyres while the third car was fitted with a set of newXM2+ tyres. In total – 2 tests were conducted and both these tests highlighted the superior grip and braking performance of the Energy XM2+ range of tyres. In the first test, we got to experience the difference between the braking distances of the Energy XM2+ tyres (worn-out) and Bridgestone B290 tyres (worn-out) in extremely wet conditions. However, in the second test, we got to take the third Swift (the one with the new XM2+ tyres) around the track for a speed test, cornering test and a small slalom test. 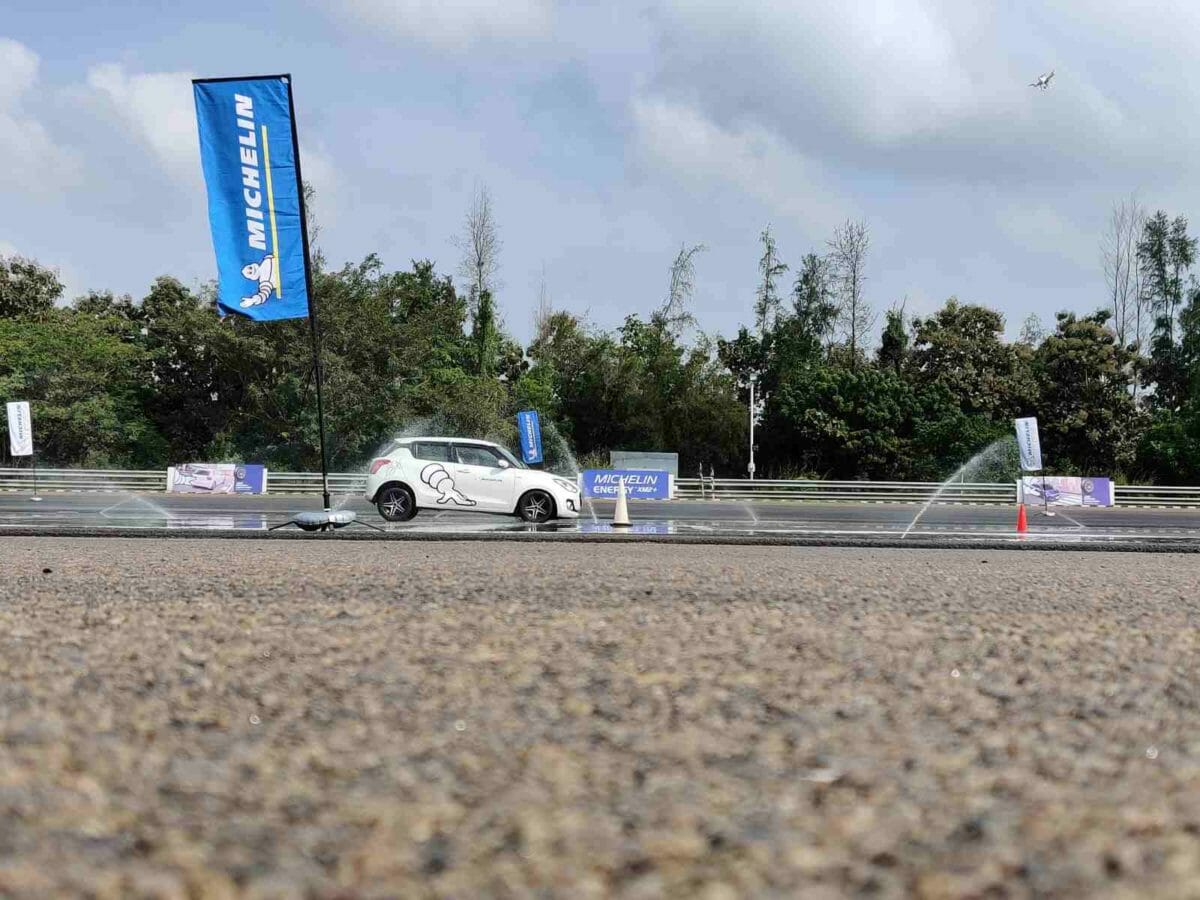 In the first test, we had to compare the braking distance of the worn-out tyres (XM2+and B290) on an extremely wet surface. Both these tyres had about 1.5mm of tread left on and had travelled almost 1,00,000 lakh kilometres. We first got the chance to test the braking performance of the competitor tyre, after which we tested the performance of the XM2+. To test the maximum limit of these tyres, we had to drive the car in a straight line and reach 100 kmph, before hitting the brakes hard at the set marker cone and waiting for the ABS to kick in and do its job. At the end of the test, the Energy XM2+ proved its worth as it managed to bring the car to a complete halt in a shorter distance as compared to its closest competitor. 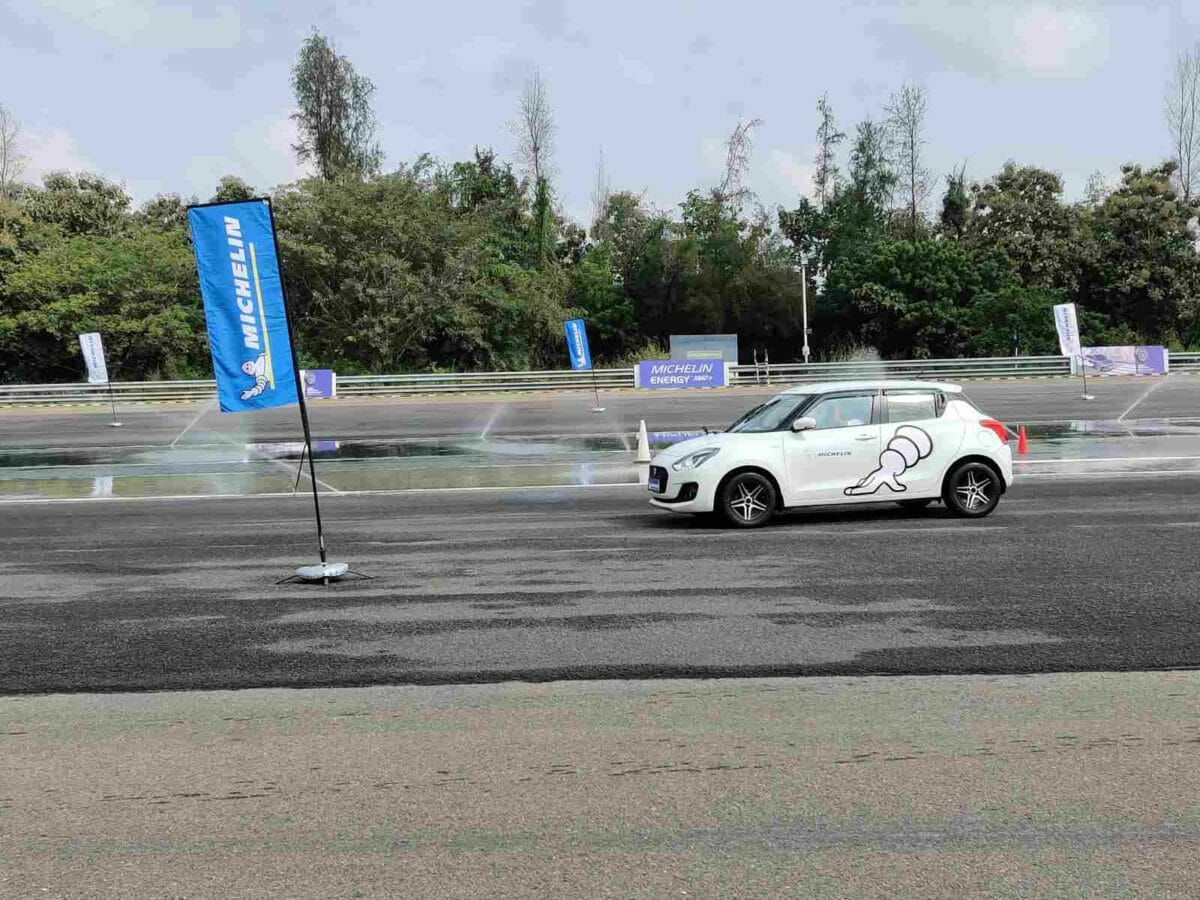 In the second test, we got to take the newly fitted with XM2+ tyres for a spin around the track and test its high-speed performance, cornering grip and overall control. As Wabco Proving Ground isn’t a race track, we actually had to control our speed and follow certain speed limits through various parts of the track. Although in this test, we didn’t compare the new XM2+ tyres with a set of new Bridgestone B290 tyres, we were still quite satisfied with the grip of the XM2+. The XM2+ was able to go around corners and grip the tarmac pretty neatly. Also, at the end of the track, the Slalom test highlighted the tyres’ ability to grip in tight corners at a high speed. 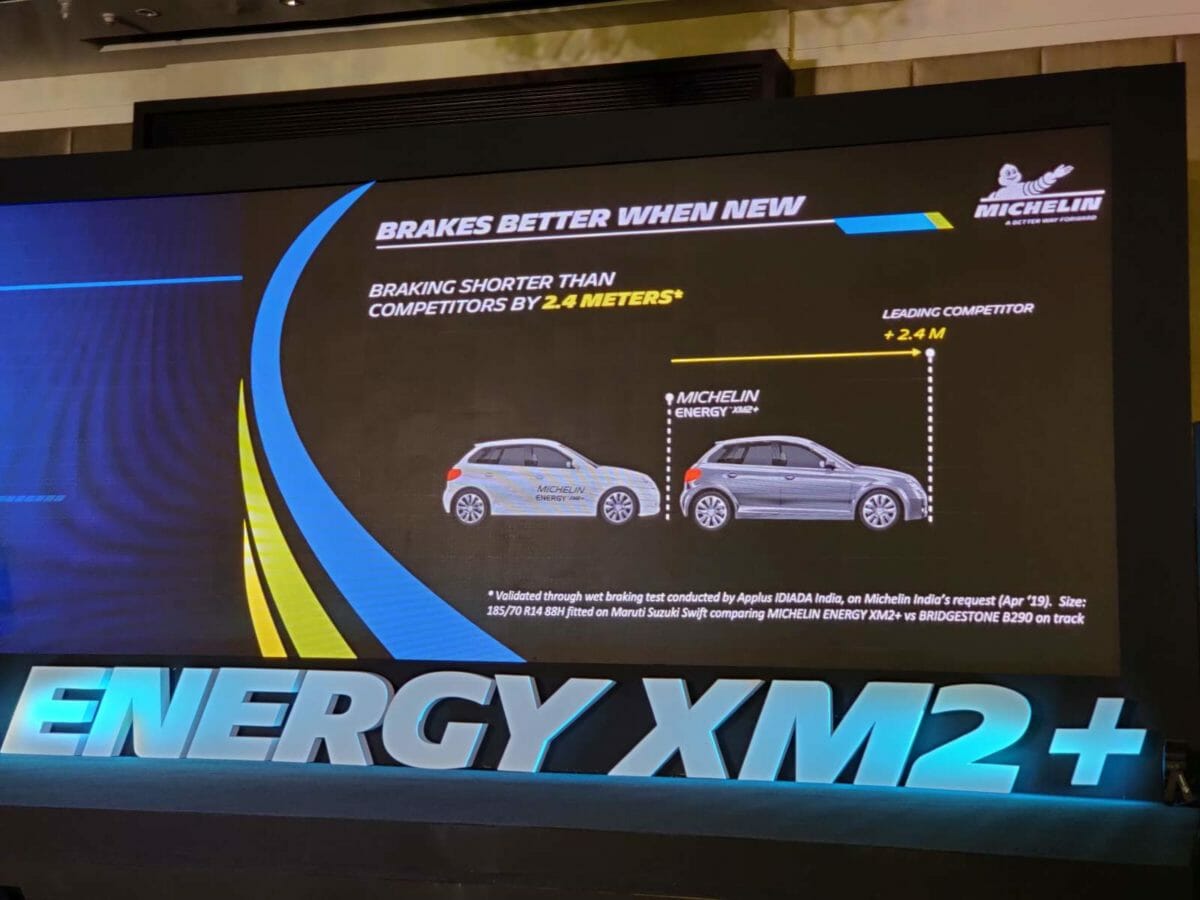 The new Michelin Energy XM2+ range of tyres not only provides superior grip and long-lasting performance but also promises to be one of the safest tyres in the market, as it retains grip and keeps the car stable even during heavy braking and wet conditions throughout its life. Although the XM2+ is 10% more expensive than the competition, it promises to deliver excellent performance and a significant improvement over its predecessor.