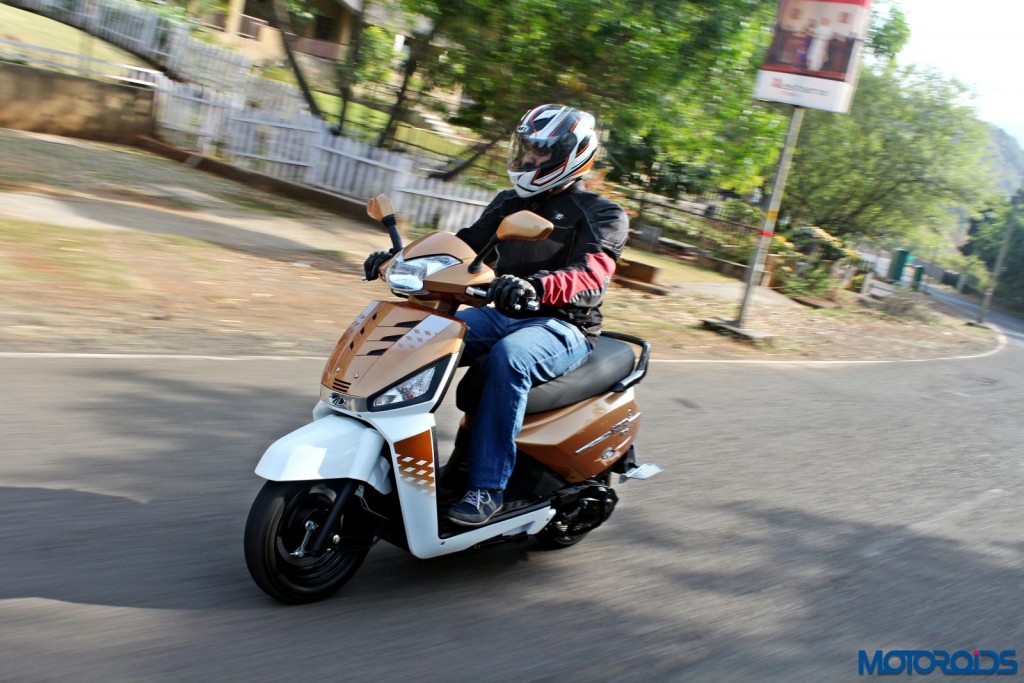 A fresh breeze of wind left Mahindra’s factory a little over a year ago when the two-wheeler arm of the Indian UV and SUV giant revealed its brand new scooter that it had developed from ground up, the G101 or Gusto. About a year and a quarter later, the breeze has grown stronger, in this case by 15 cc to be exact, as Mahindra Two-Wheelers introduced the new and relatively powerful G108 or Gusto 125.

The first product to hit the shelves from Mahindra Two-wheelers in the year 2016, the Gusto 125 comes with an updated bodywork, new graphics and a re-bored M-Tec engine that now has 15 more cc’s that results in a 0.5 hp and 1 Nm of performance bump over the Gusto 110. As I get nostalgic about my first ride experience of the Gusto 110 in Rajasthan, I get astride the new Gusto 125 in the scenic town of Lavasa to find out what Mahindra Two-wheelers has brewed for us this time around. 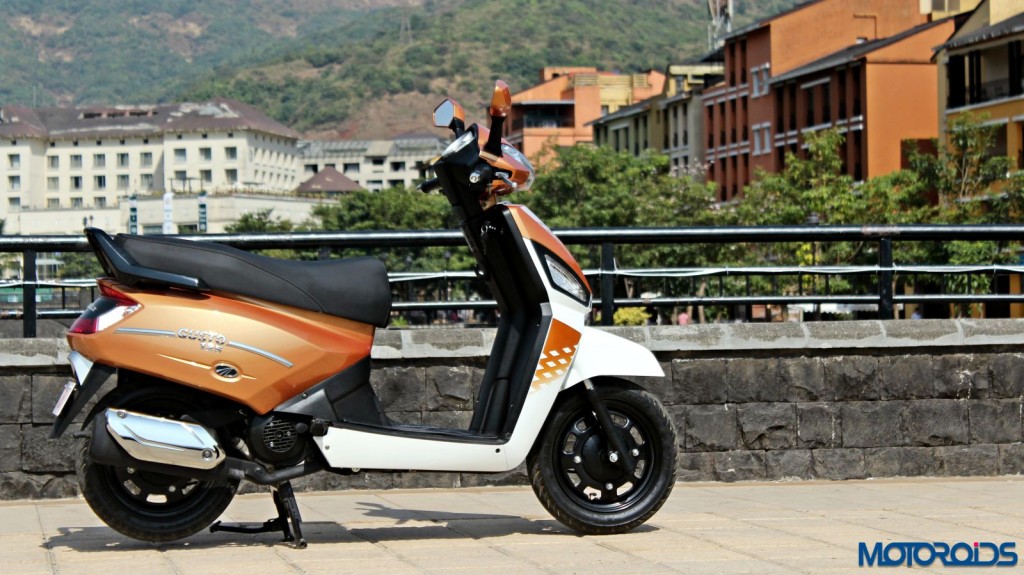 The Gusto 125 may not look much different from the 110cc version because it isn’t, by much. So instead of taking you through the design in entirety all over again, we would talk about the changes on the 125cc model.

Besides the redesigned front apron, body coloured rear view mirrors and updated graphics, the Gusto 125 carries forward most of the slashy, straight cut design traits from the 110cc scooter. The creases on the apron have been redesigned to distinguish the 125cc model from the 110cc scooter. The front also tells apart the 125 from the 110 with its black honeycomb grille versus dull silver plastic fins. The Mahindra logo too sits on a more premium looking chrome plate instead of the silver finished unit on the 110 while the clear lens turn indicators are continued to be surrounded by the black plastic cladding. 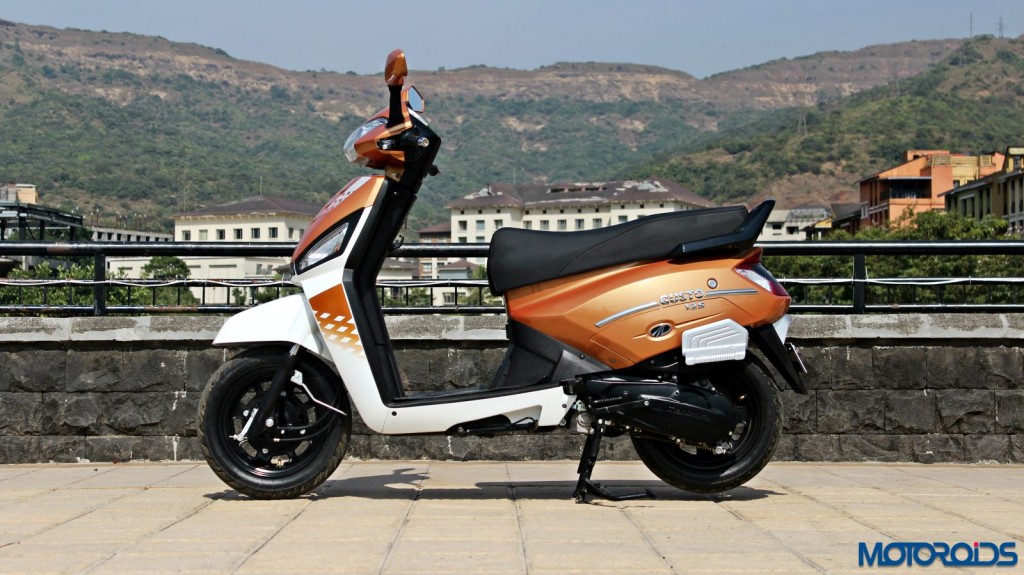 As mentioned before, the mirrors have been draped in body colour on this one, through the shape remains unchanged. As the eyes stray slightly below the mirrors, you can see newly chrome finished bar-end weights and alloy brake levers, which may or may not be liked by the buyers – in my case, I would have liked them to be a bit more subtle. Black painted units would have gone well with the overall design and looked sophisticated.

An identical setup welcomes you as you get astride the scooter. The instrument cluster, switchgear and the keyhole is similar to the Gusto 110. Major chunk of the instrument cluster is represented by the speedometer with an integrated odometer. Fuel gauge sits on the bottom right while the top right position is filled by turn indicators. A high beam indicator is placed to the left corner, next to the speedometer. The entire setup is analogue which is a bit of a letdown and we would have liked to see a semi-digital instrument panel on the relatively bigger Gusto. The keyhole misses out on the integrated fuel unlock mechanism as the fuel filler still sits under the seat. 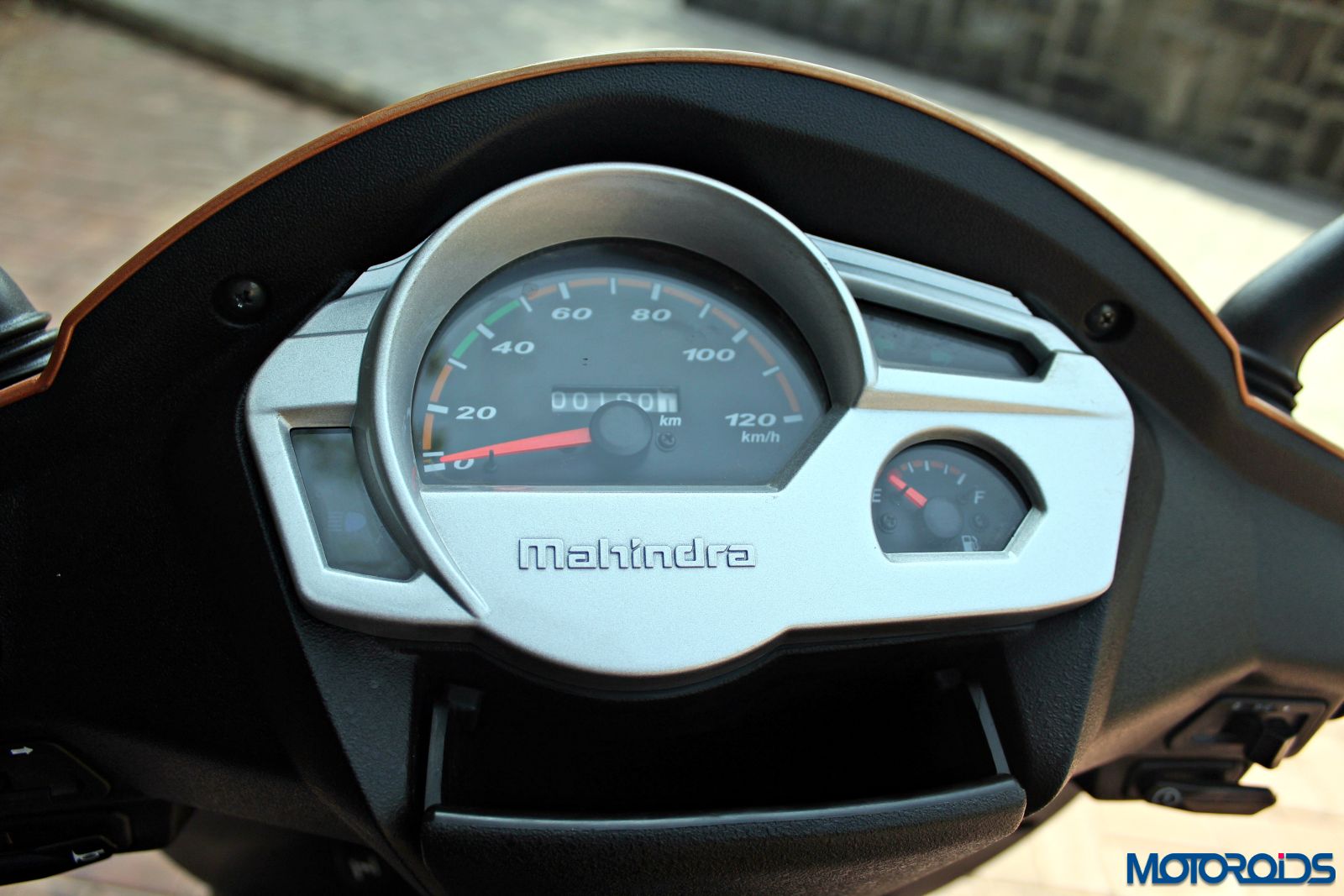 The side panels aren’t any different from the Gusto 110 but are now jewelled by a newly installed chrome strip and a “125” badge sitting right below the Gusto branding. The pillion grab bar also comes painted in black while the exhaust gets a chrome heatshield. But what’s really interesting in the new Gusto 125 line-up is the ‘Monarch Black’ colour that comes with a contrasting and visually appealing brown seat. The stitching pattern has also noticeably changed and we are really digging this new look. The tail section hasn’t undergone any change and it would be really difficult differentiating both the variants from the rear.

The under seat storage isn’t too great and is insufficient to accommodate a full face helmet. However, storing a open face helmet or a small handbag should not be much difficult. 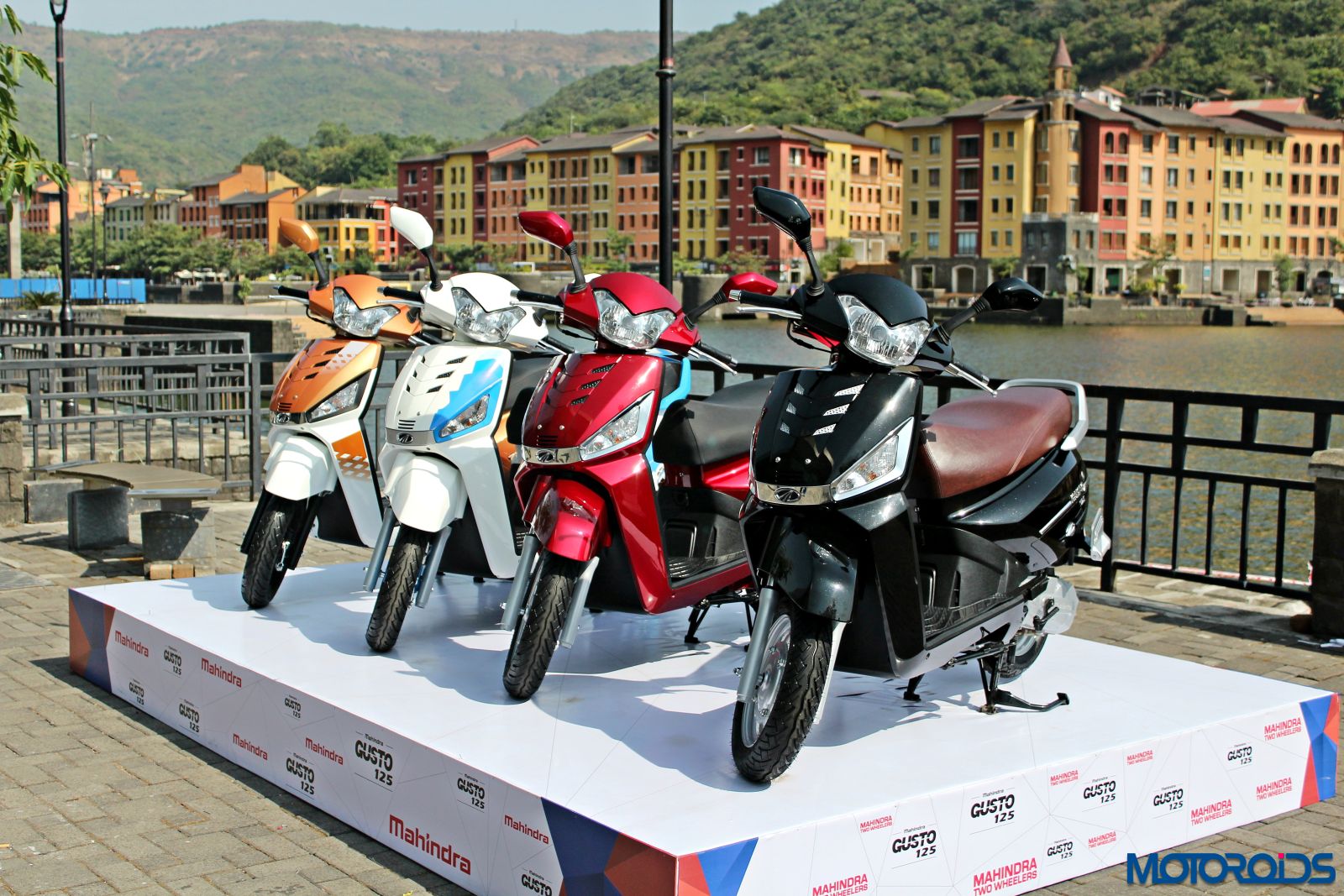 The overall design continues to be angular which may appeal to some, but is in contrast to the organic, flowy lined employed by the likes of Yamaha and Honda of late. The two new flashy colours would probably appeal to the young college goers. For a more mature audience, Mahindra is offering a solid red along with my personal favourite ‘Monarch Black’ colour. Lastly, the floor mat is not bolted to the base but is held in position using rivets and tends to move out of its place. That being said, the build quality feels commendably good. The switchgear too, though basic, is well put together. The multifunction flip key adds to the style/feature quotient and makes the scooter more desirable. The flip key also gets a LED panel that illuminates the keyhole at night and can be used to trigger a sound and flash the turn indicators so that it would be easier to locate the Gusto 125 in busy parking or dim-lit areas.

Meet the Gusto 125 in details: 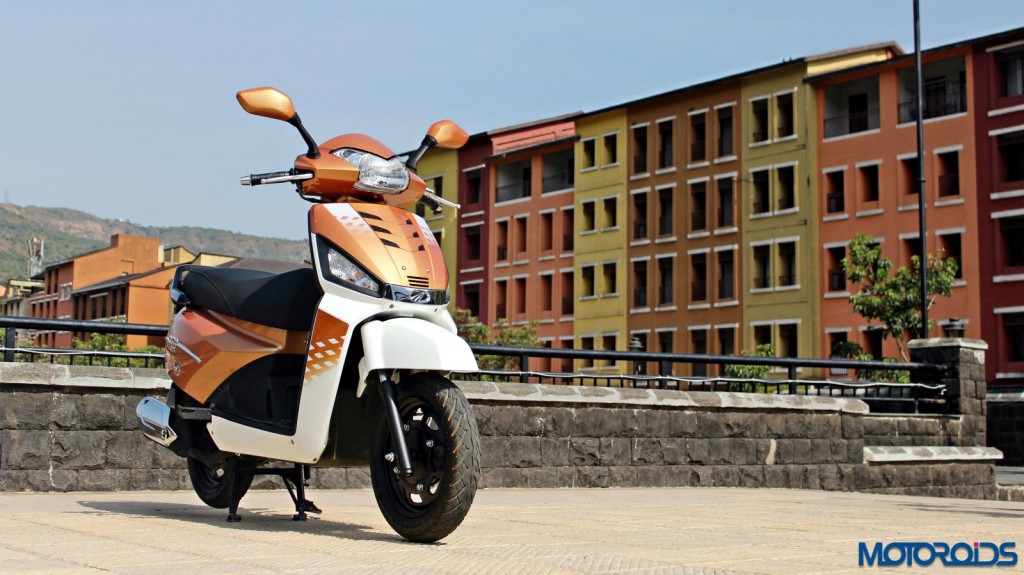 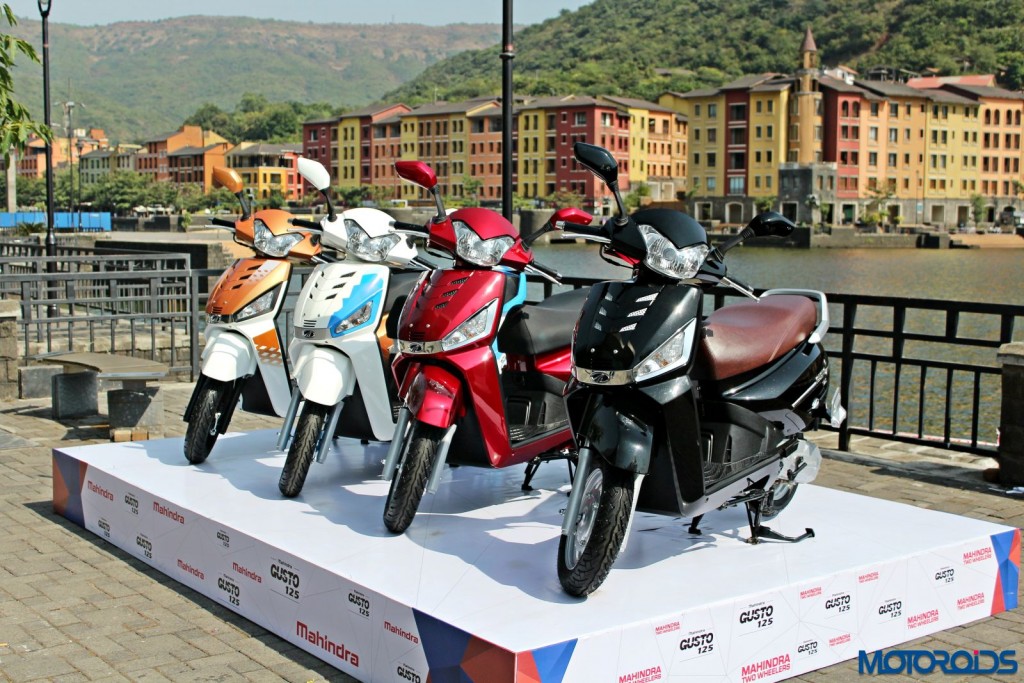 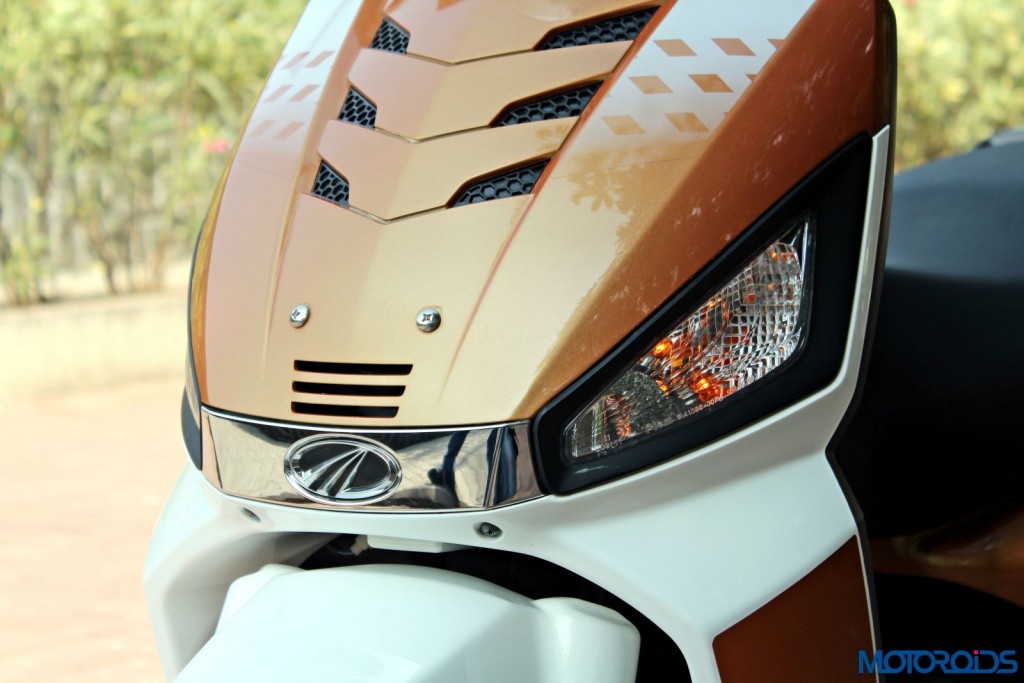 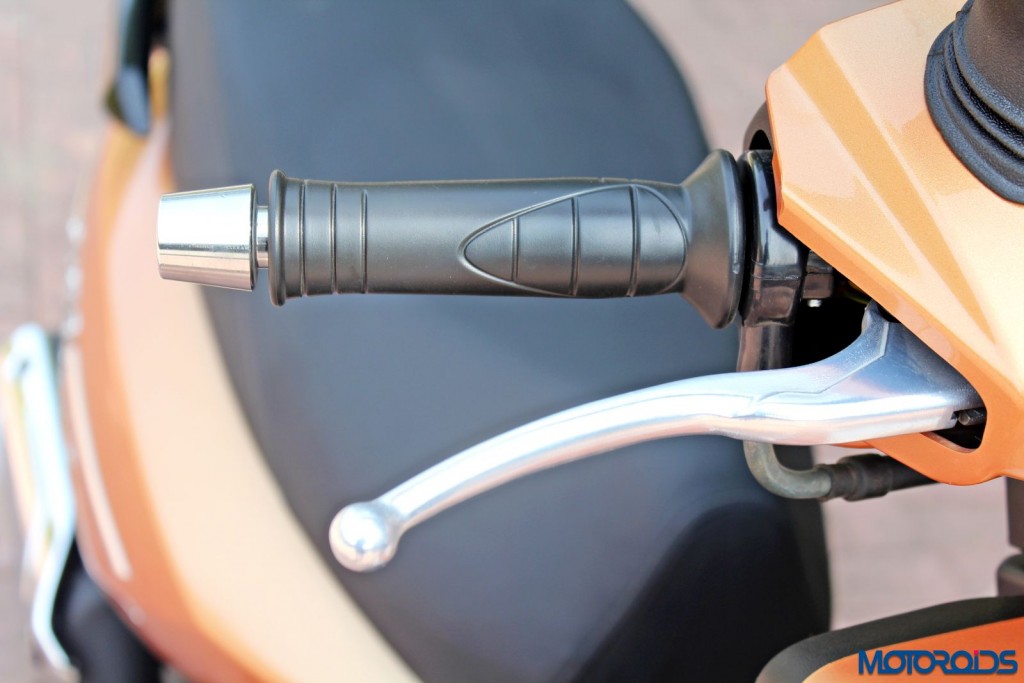 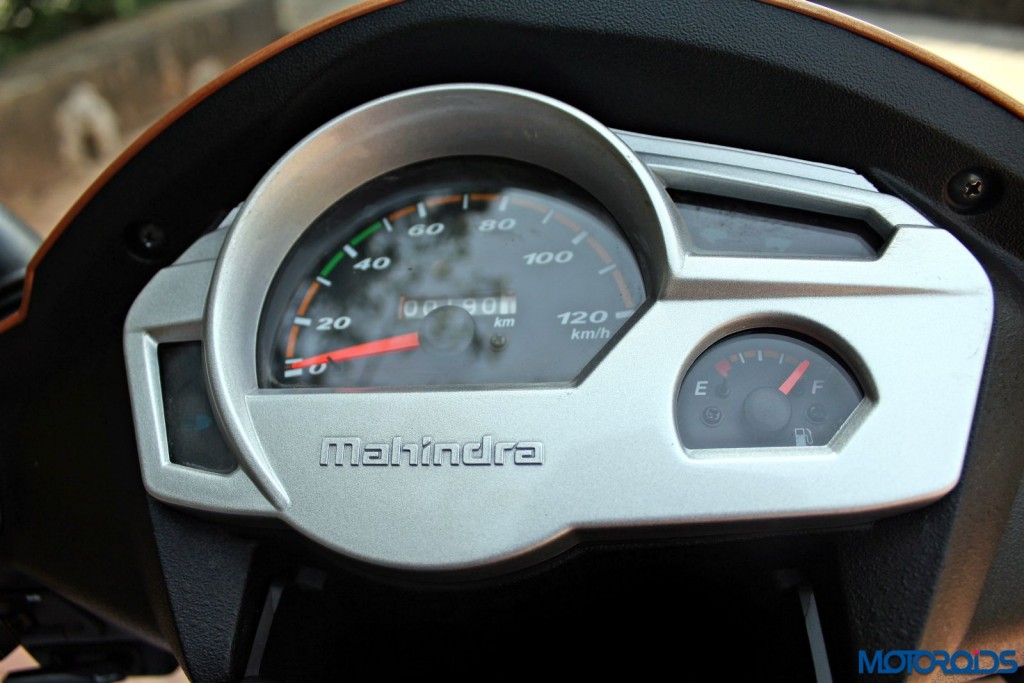 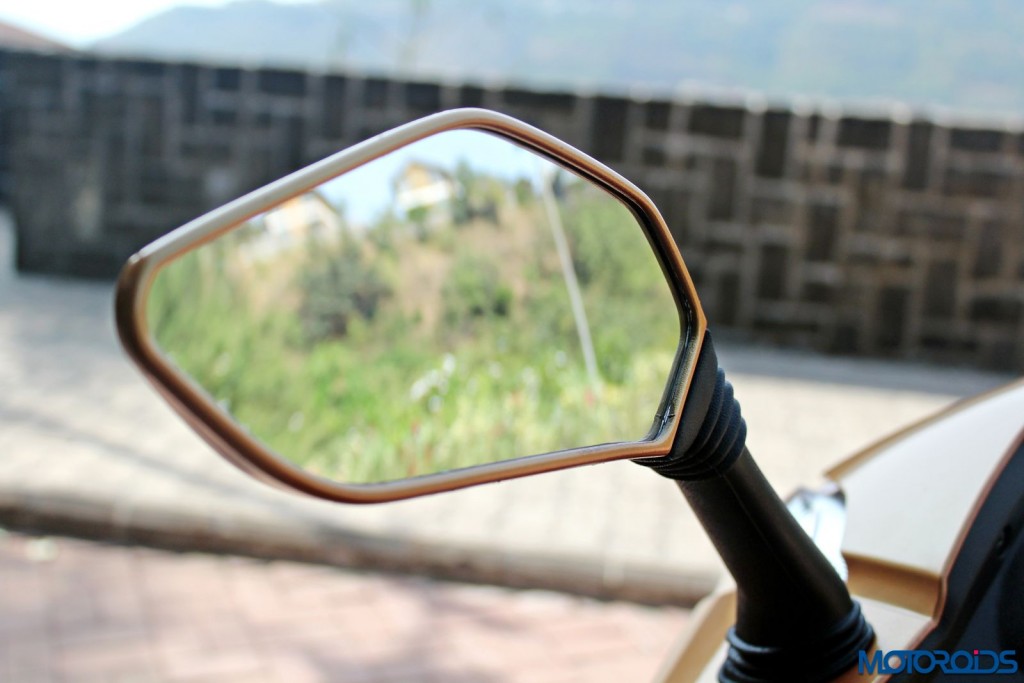 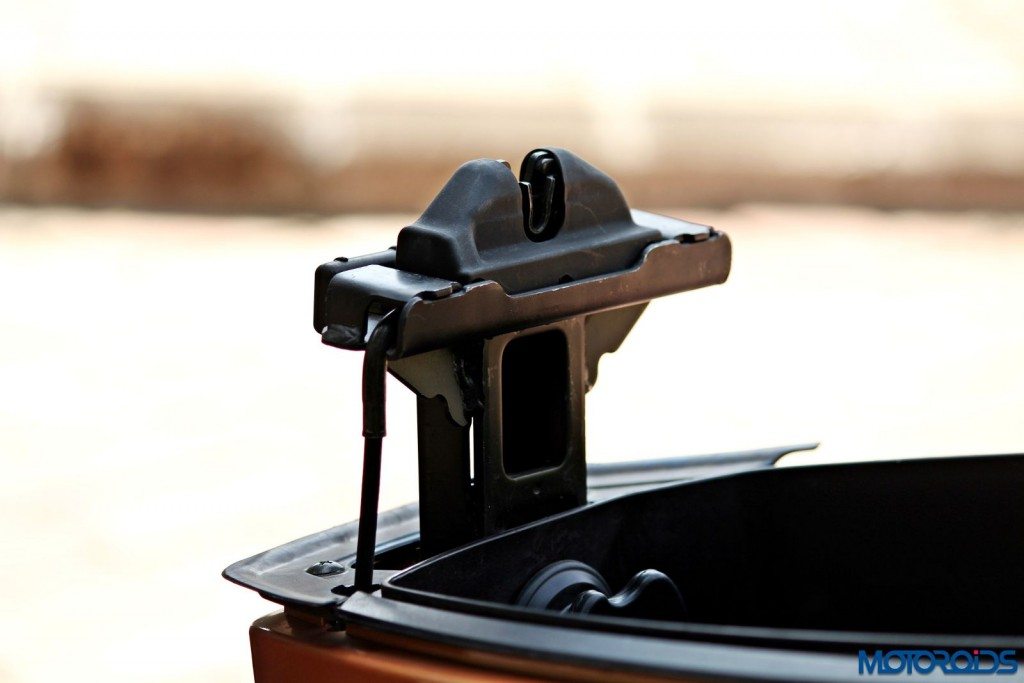 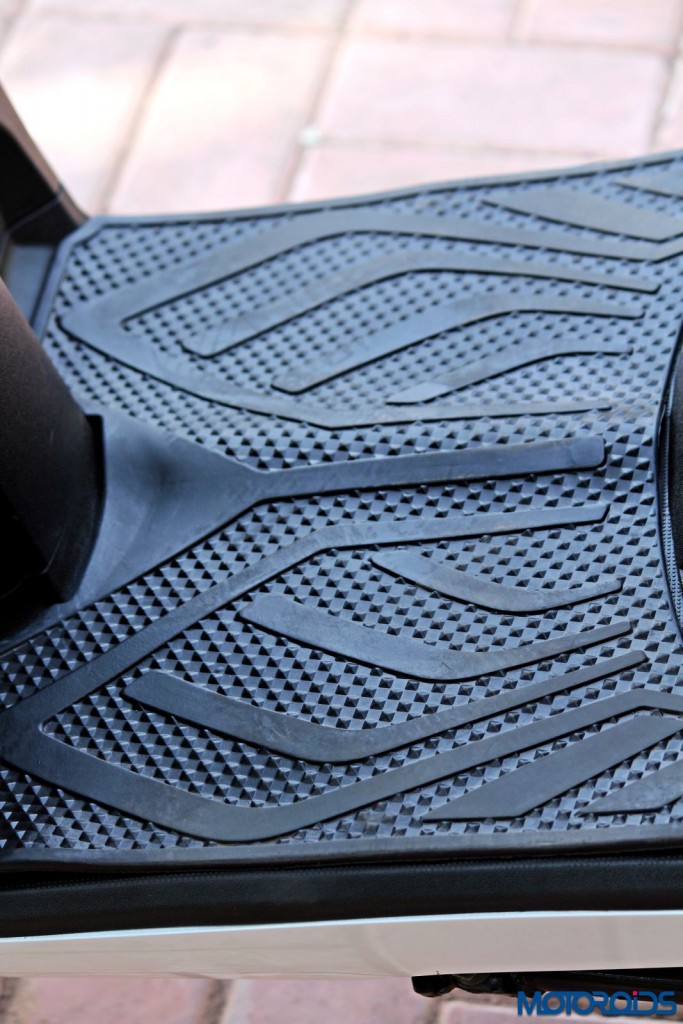 I wish Mahindra had offered a bolted on floor mat, or at least a better mechanism to hold it in place 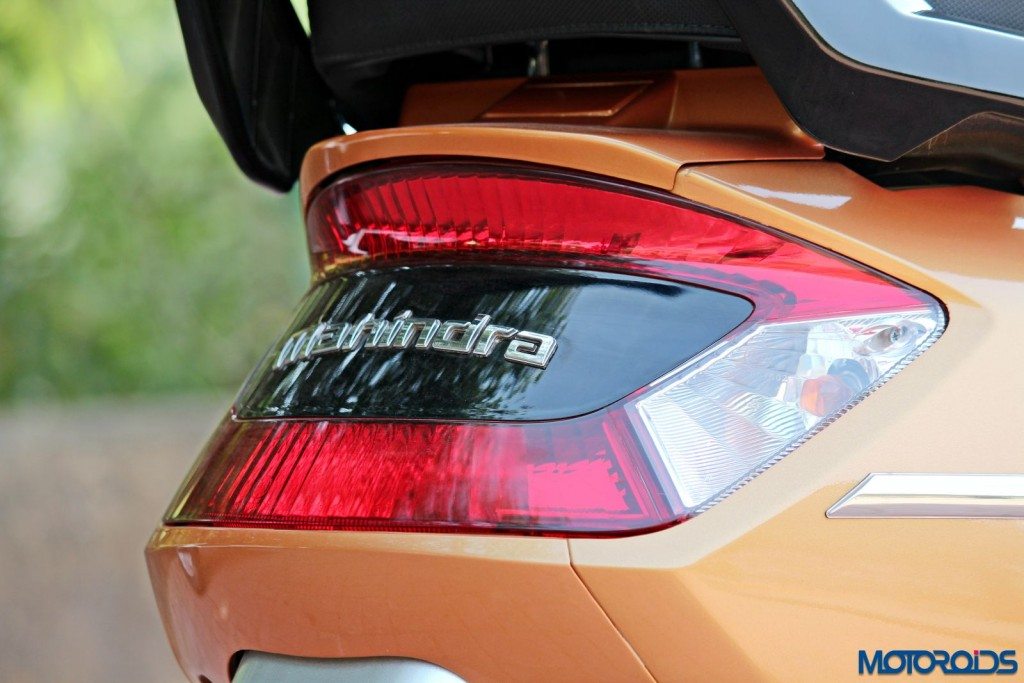 Apart from the black painted pillion grab rail, the tail section does not get any update 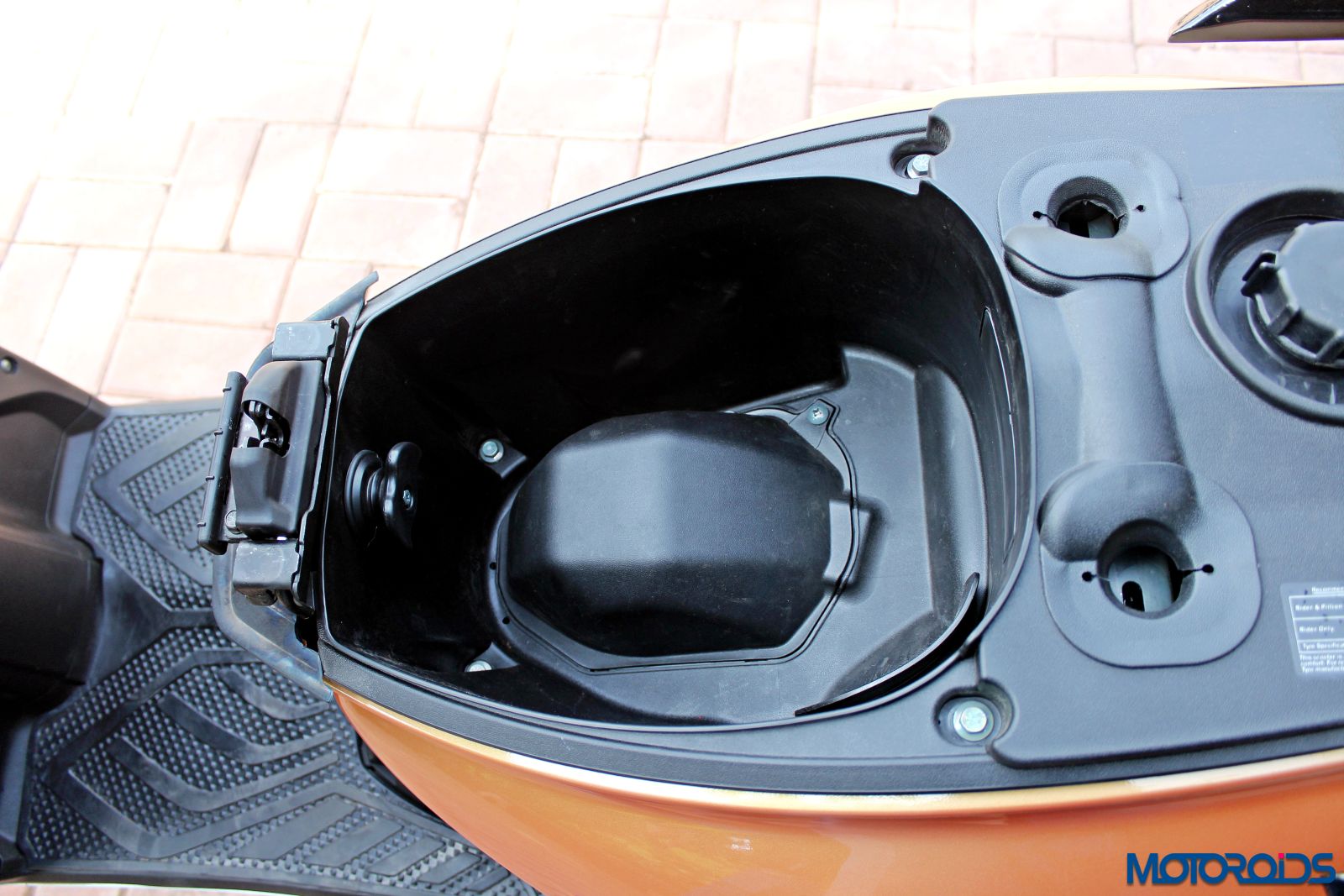 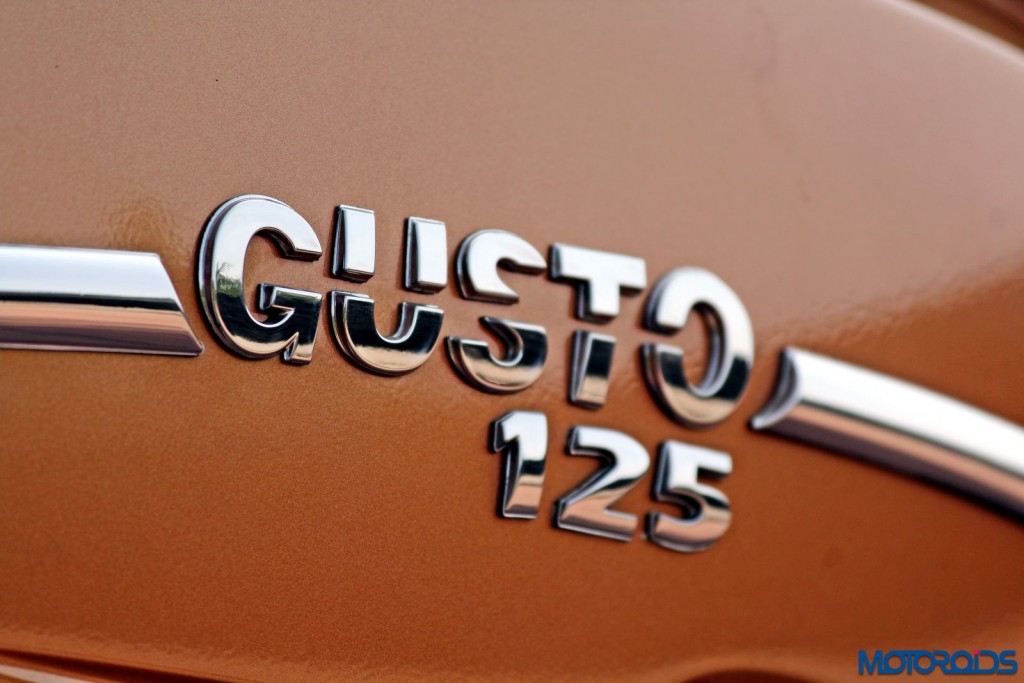 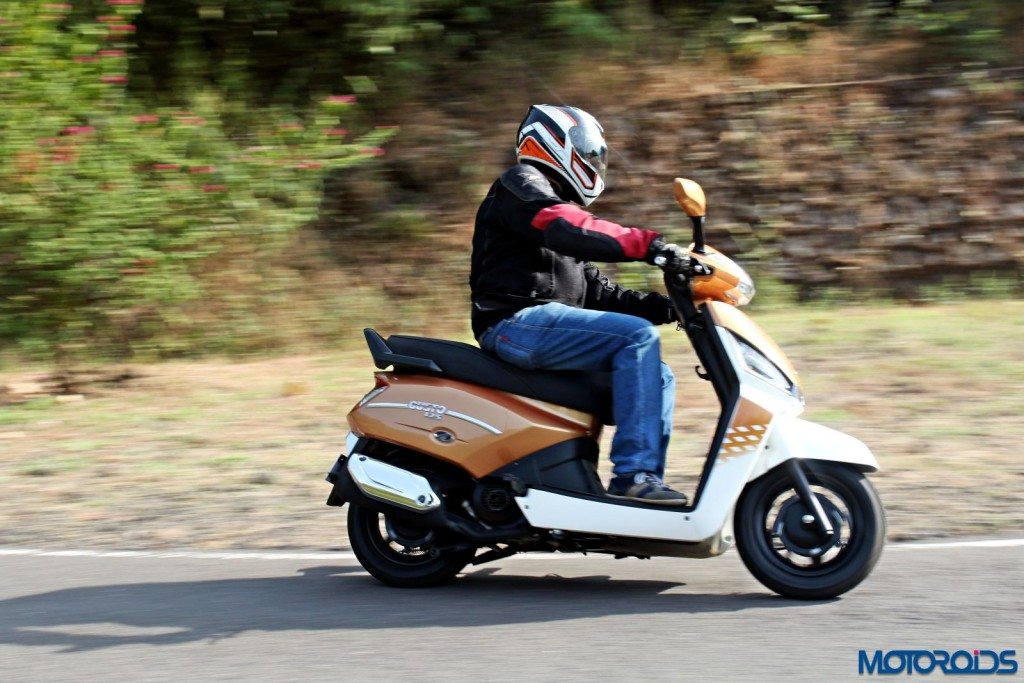 In terms of the output figures, the engine may not sound too different from the 110cc model but there are a few noticeable changes. The 110cc motor felt smooth and the 125cc engine is even better. The Gusto 125 gets a silent cam-chain and low friction piston rings which are aimed at improving the NHV levels of the scooter and the hardware does not disappoint. Add to that a new pair of bar-end weights and you have a scooter that seldom sends out any disturbing vibrations. 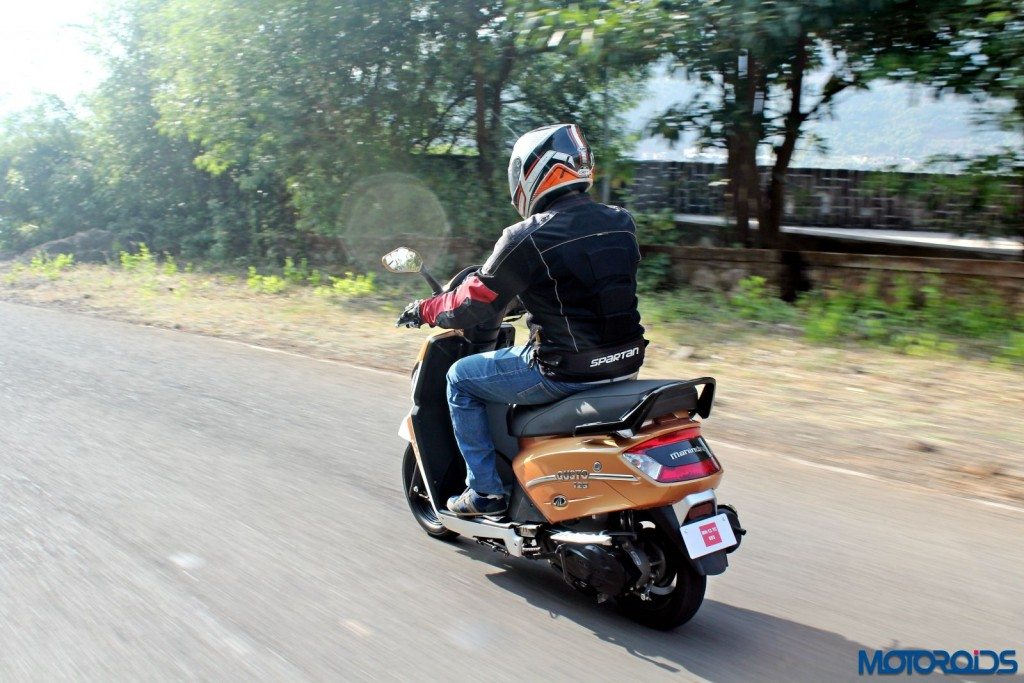 As we said before, the scooter is slightly on the heavier side but that does not hamper the performance by much. The engine feels peppy at first as the speedo reaches the eco-mode post which the acceleration becomes relatively linear. The eco-mode between 30-50 kph is where the scooter will be spending most of its life and the Gusto 125 feels refined and vibe-free in that zone. Venturing into higher speeds isn’t a problem either. The scooter doesn’t feel flustered even at speeds of 70-80 kph, though some, forgivable vibrations from the footboard do start filtering in at higher revs as the scooter reaches the 80 kph zone. Reaching the top speed in the township of Lavasa was bit of a task due to a lack of long and straight roads and many uphill climbs and I could only see the speedo get ever so slightly past the 80 kph mark.

Now Lavasa with its steep climbs and sharp switchbacks isn’t the happiest place for a scooter to be in, and the Gusto 125 had to share its bit of tribulations. While dealing with some of the sharpest gradients, the scooter, even with relatively short stretches to gather pace on managed about 60 kph with a solo rider and about 40-45 kph with a pillion on board. 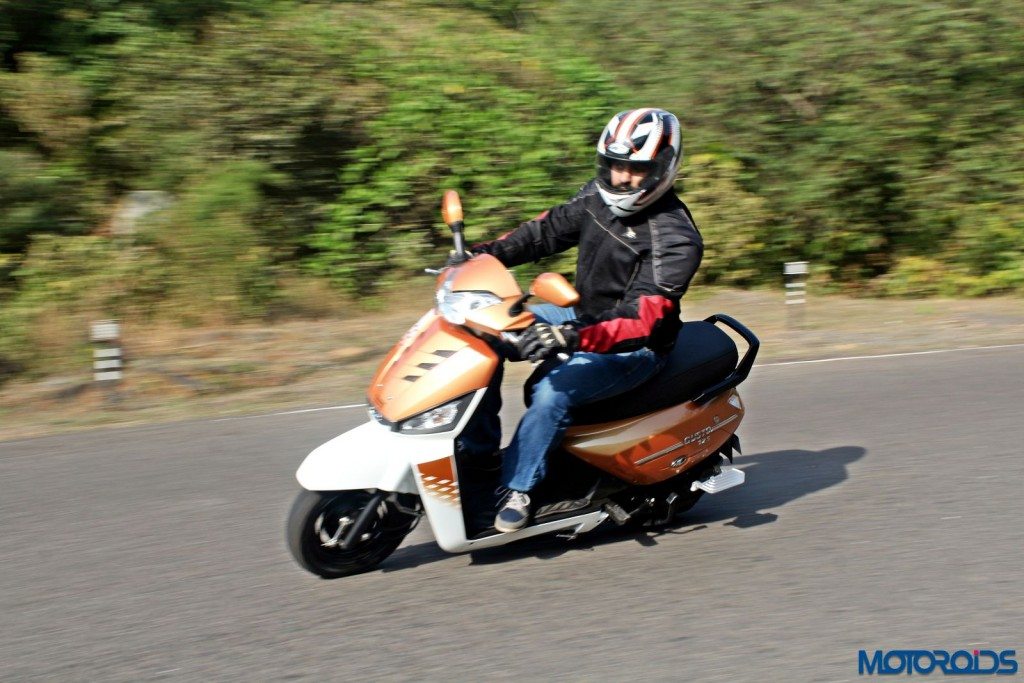 Braking department on the new Gusto 125 is handled by drum brakes as discs are not currently available, even as option. The braking setup is satisfactory but not praiseworthy. While the speed drops reasonably easily from about 50 kph, dropping the anchors harshly from 70-80 kph took slightly longer than desired. Having said that, the bigger Gusto has sufficient braking to handle whatever your everyday city riding routine may have to throw at it. An optional disc brake is expected to make way on the new Gusto 125 pretty soon.

We could not test the fuel economy in our four hour ride experience but by the time we were done with the shoot and ride, the fuel gauge needle of that six-litre tank had moved marginally to the left.

In all, the Gusto 125 feels perceptibly quicker than its 110 sibling off the line. It’s through the early spectrum of the rev range that the acceleration is the most apparent. The big change, though, is the significantly better NVH levels on the scooter. Mahindra have broken new ground by their own yardstick in terms of refinement and the Gusto 125 does manage to feel substantially smoother than its 110cc brethren. It doesn’t have the blistering performance offered by, say, the Suzuki Access, but its a peppy little scoot off the block, offering you that wee bit extra you require over a regulation 110cc scoot to not feel bogged down under weight or while negotiating steep gradients. 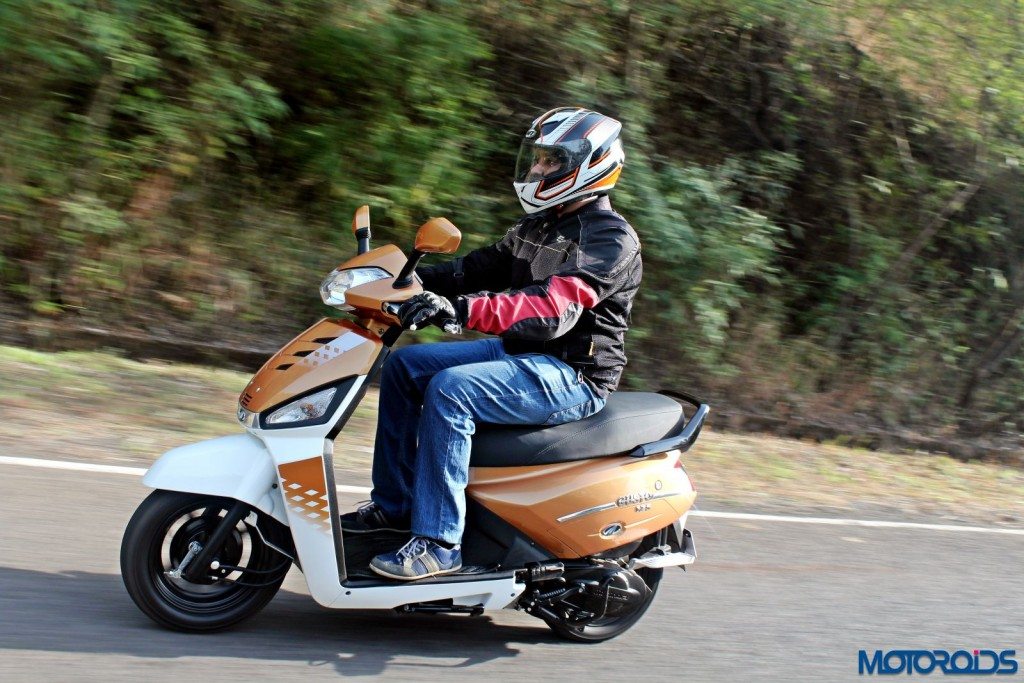 As we said before, the engine is thoroughly refined with very few, forgivable vibrations from the footboard at higher RPMs. The ride quality is laudable with the well tuned suspension, comprising a telescopic fork with air spring upfront and coil type hydraulic unit at the rear. The well padded, cushy seat also complements the absorbent suspension well. Uneven surfaces are tackled quite efficiently and the Gusto 125 rides confidently over rough patches of road. The rider’s triangle is not different than most of the scooters out there and is just about right to suit a wide majority of its prospective audience. The body weight aids the straight line stability and riding the scooter on city speed limits, or even slightly beyond that, is not a problem.

Flicking the scooter around is quite easy too, and while it holds its line rather well, it isn’t quite the nimblest thing out there when it comes to carving corners. Mahindra still have some way to go before they could be lauded for having created a truely dynamically accomplished scooter. You may have to clock a few kilometers on the Gusto to get comfortable with the handling characteristics. The MRF tubeless rubber that comes installed on 12-inch wheels is a good addition to the mix and provides adequate grip while braking as well as while going around the corners. This specific segment of commuters doesn’t lend itself too generously to the rather cruel hands of enthusiasts. Its a commuter machine and it feels like one. The Gusto 125 is par for the course, but don’t really expect anything exceptional from this one. 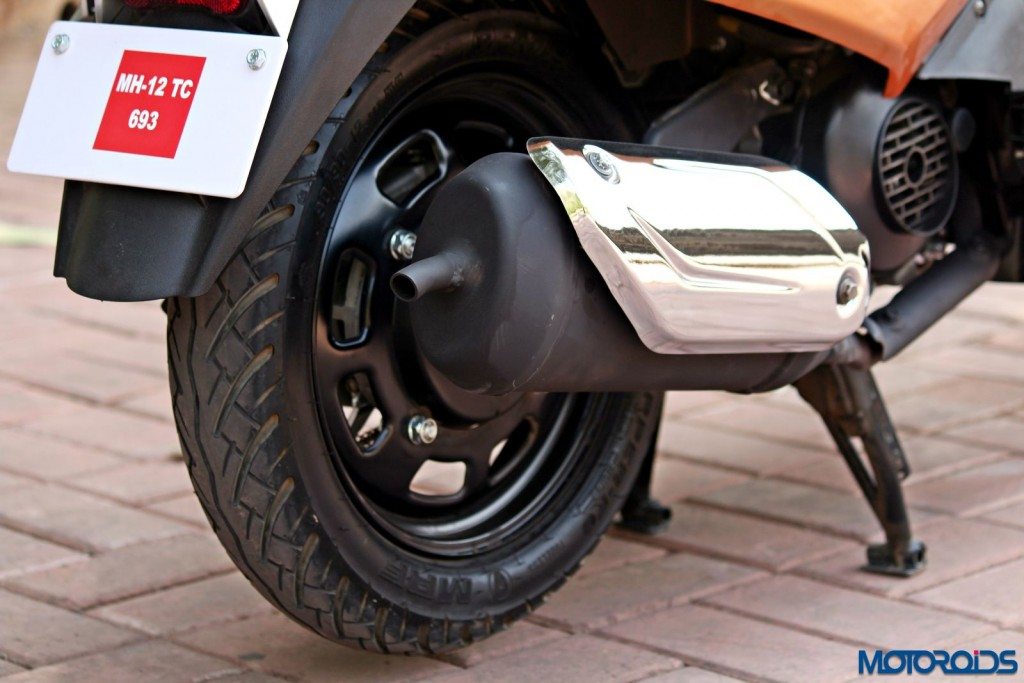 The Mahindra Gusto 125 may not look much different from its smaller 110cc sibling, but it features some changes which are more than just skin deep, and really matter from a two-wheeler manufacturer’s standpoint. It’s easy to sprinkle a bunch of features as a garnish to lure the customer, but making perceptible, tangible changes to the engine and chassis is what really matters in the long run. In that sense, the Gusto 125 is a significant improvement over its smaller sibling. The refinement levels have shot up and that couldn’t have happened without the boffins at Mahindra having burnt a lot of midnight oil. The improvement in the refinement and overall feel of the engine means that the Indian bike maker is serious about improving its offerings where it matters, and we’re glad to see that it’s on the right course.

The sprinkling we talked about isn’t much different here though, and the 125cc version has no added features over the smaller engined scoot save for the bar end weights and a few cosmetic changes including the funky new colours on offer.

Let’s face it – the Gusto isn’t achingly beautiful, or blisteringly fast or technologically superior. What it is, is a feature-rich, smooth, and comfortable scooter which seems to have been built rather well. The price, thus would be critical in drawing the customers in the segment to the showrooms. A cue to pick would be the analogue instruments, where Mahindra have clearly decided not to loosen the leash on costs. This could mean only one thing – the traditionally aggressive pricing strategy of Mahindra will continue with the Gusto 125 as well, and if that happens this scooter featuring a multitude of straight cuts on its skin can appeal to a wider audience base. We’ll reserve our final verdict for the official launch, and will update this article when we have the prices with us.

In the meantime, we would like you to share your thoughts and opinions on the new scooter with us – maybe suggest a price to Mahindra, or let us know what you’d rather buy in the segment.