Formula 1 legend, James Hunt once said, “The closer you are to death, the more alive you feel. It’s a wonderful way to live. It’s the only way to drive.” 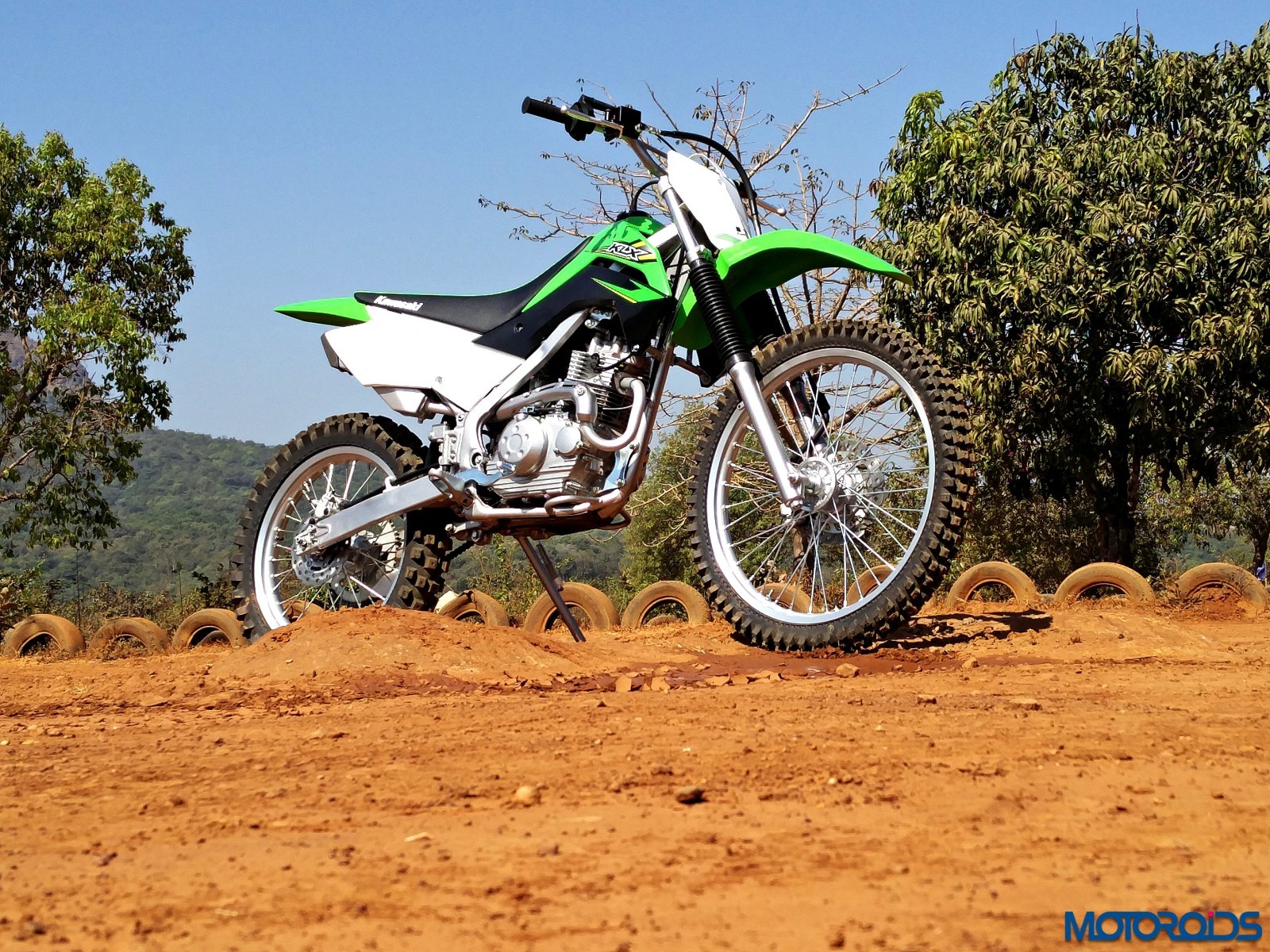 Luckily for me, things weren’t so extreme and I still had a fun time with the Kawasaki KLX140G. Let me be honest, this was for the first time that I swung my leg over a trail motorcycle. Secondly, if you exclude the broken roads of Mumbai and an occasional mild off-roading session, I’m not really an off-road or a trail motorcycling expert. So as you would’ve guessed, emotions of excitement, curiosity and some amount of apprehension were surrounding my usually relaxed brain. Offering some solace though was the fact that the KLX140G was exactly designed for someone like me, a novice off-roader who probably has never ridden a trail motorcycle. Before I talk about the cocktail of emotions I experienced on track, let’s know the machine. 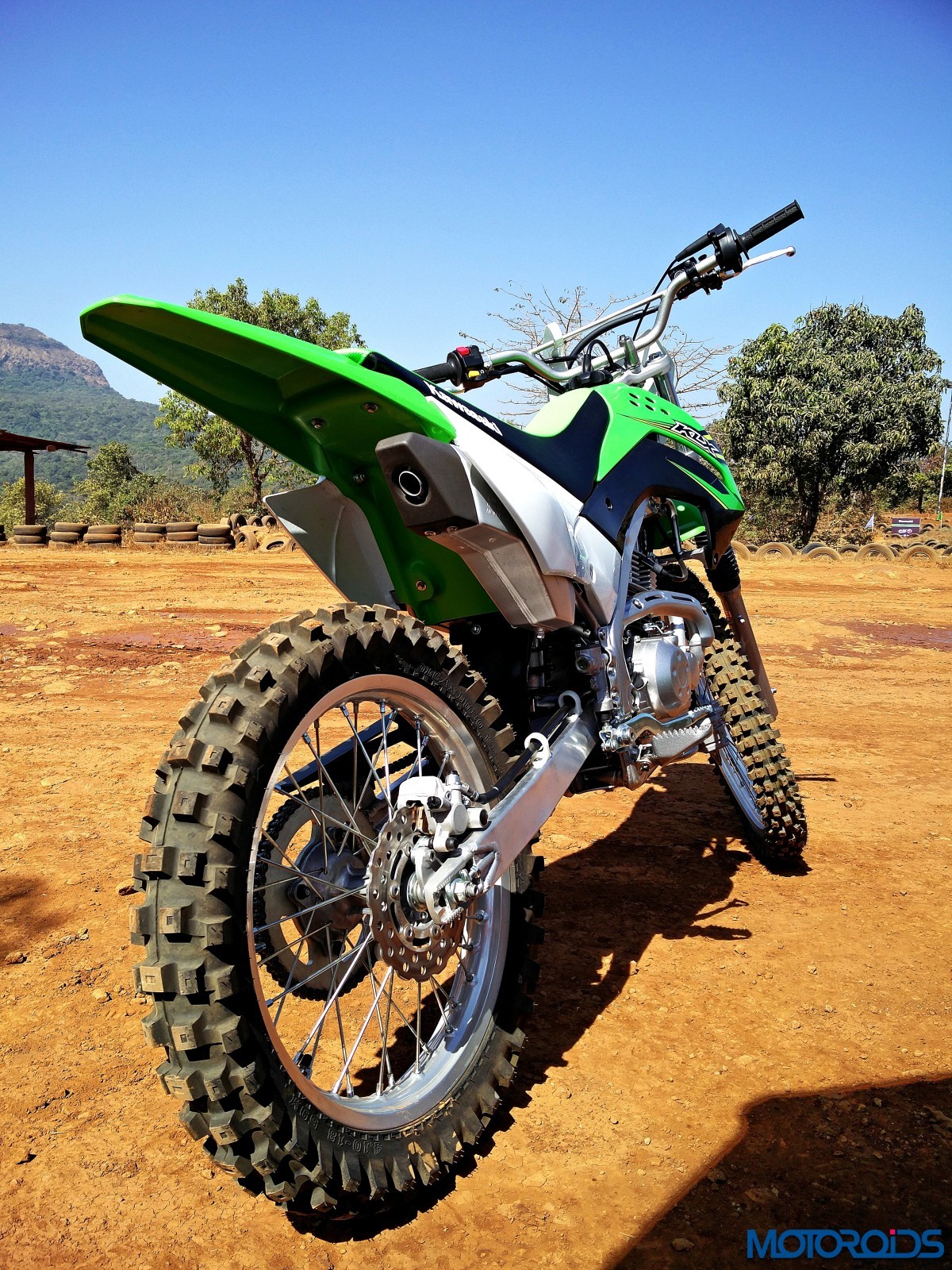 How Does It Look?

Being a trail motorcycle, Kawasaki has done everything it could to keep the weight of the KLX140G as low as possible. So you’d only see the bare basic and absolutely essential equipment on the motorcycle. As you would’ve already noticed, this motorcycle is meant for track use only and thus does not feature any illuminators, blinkers or rear view mirrors. There is no instrument cluster to tell you about how fast you’re going either, or even a key to start the engine. All you have to do is hop on the saddle, switch the engine kill button to ON and hit that yellow starter with the left thumb. 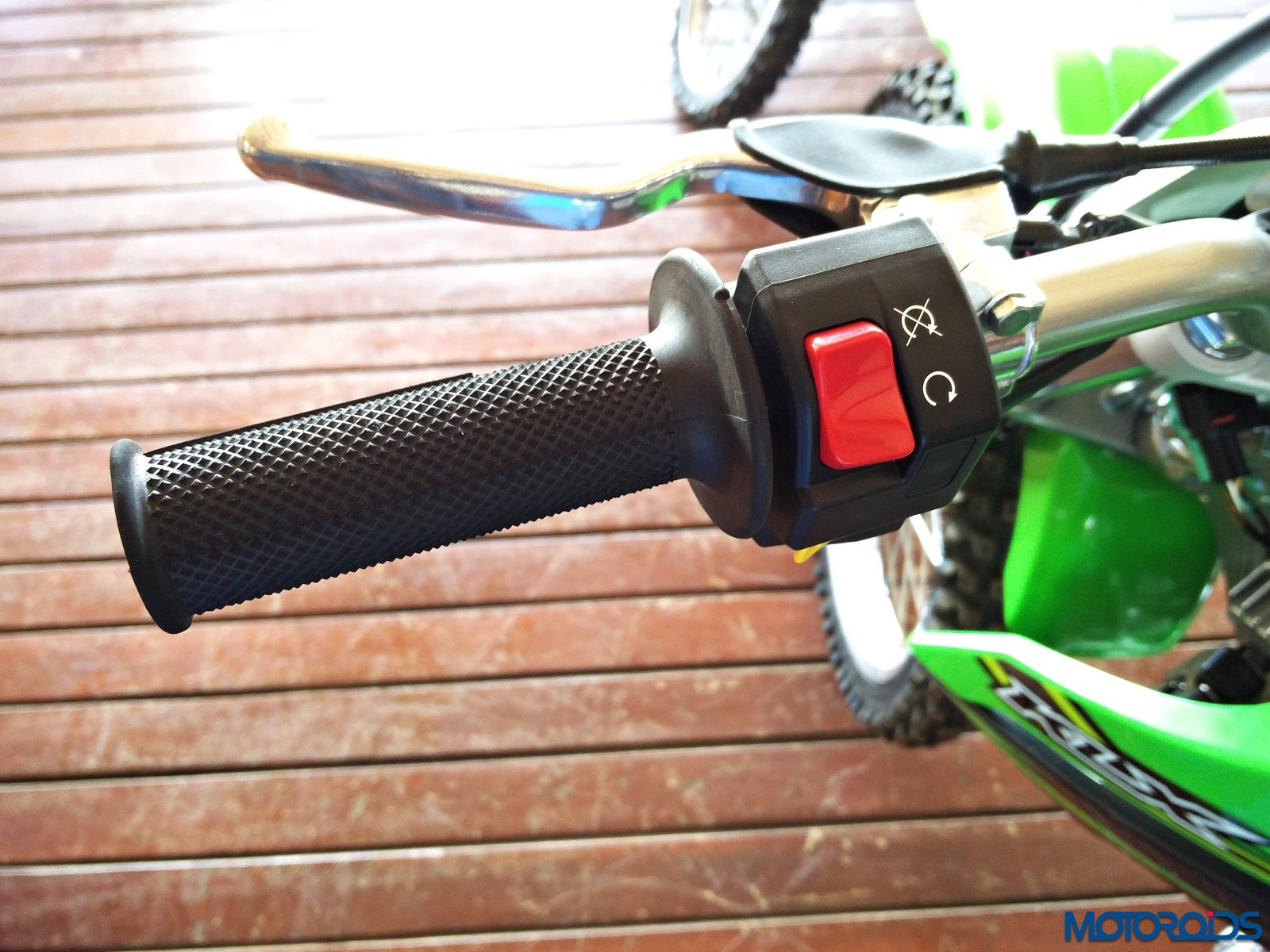 Upfront is a tall set fender which sits quite a few inches above the knobby, off-road spec tyre. Above the fender is a white fibre cover which occupies the space which is generally reserved for a headlight. Then there is the lean, 5.8-litre fuel tank which is followed by a long and narrow dual-tone seat. Behind the seat is the rear panel which doubles up as the rear fender, offering some protection from small pebbles and gravel thrown by the rear wheel. 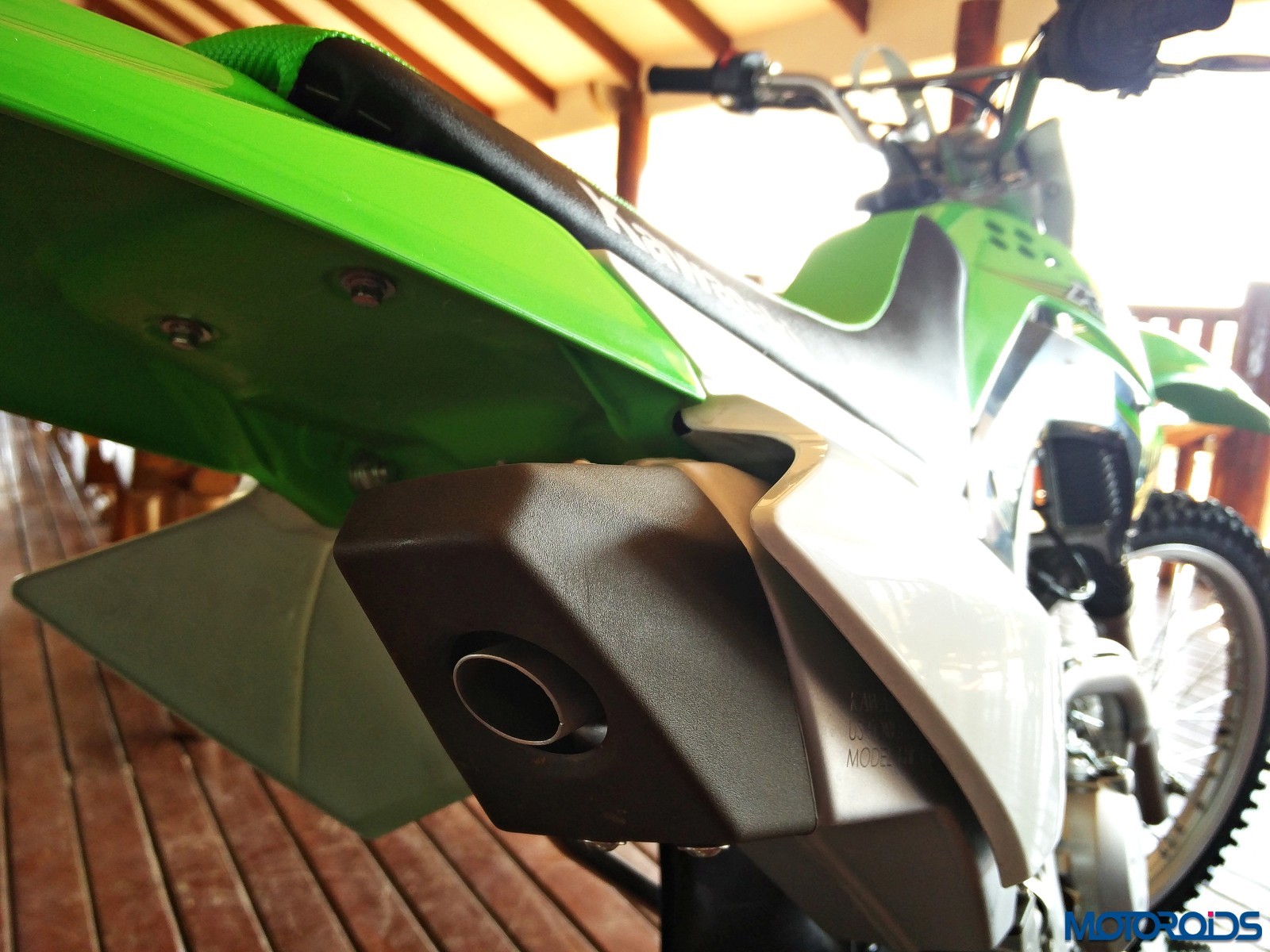 With minimal body panels, the box-style high tensile steel frame, engine and other mechanical bits are fairly visible. A tall set trapezoidal shaped exhaust canister with a dual tone finish is a perfect amalgamation of form and functionality. It is a four-stroke engine so don’t expect the typical two-stroke buzz from the exhaust but it sounds grunty enough for your aural pleasure. With all the weight saving measures, the Kawasaki KLX140G tips the scale at just 99 kg (kerb) which is just phenomenal. The paint and build quality is typical Kawasaki, just perfect, and we really couldn’t point at any flaws in the design department. 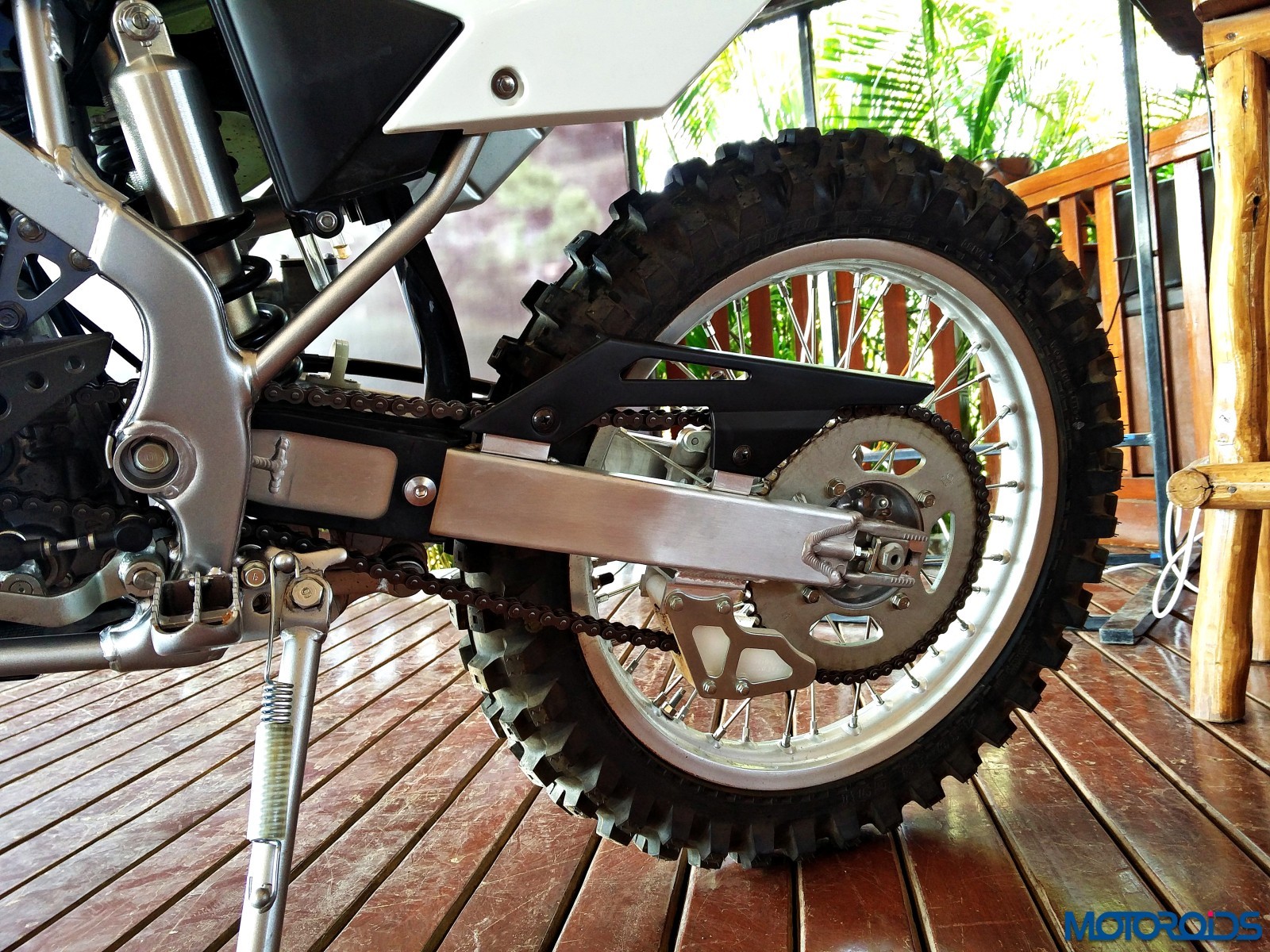 Check out the Kawasaki KLX140G in detail 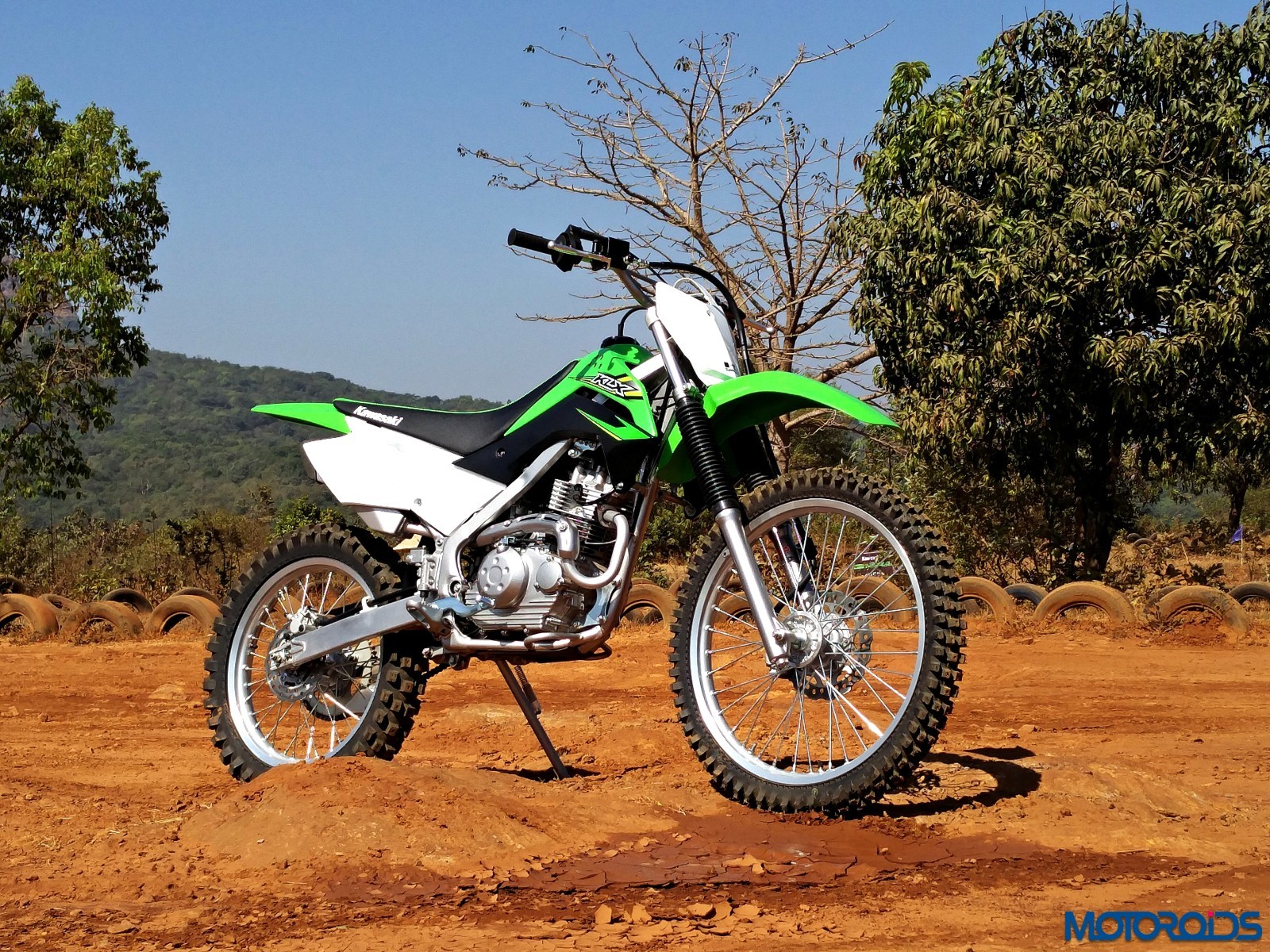 The motorcycle, with a kerb weight of 99 kg, is remarkably easy to handle on the dirt track. Looks quite a stunner, doesn’t it? 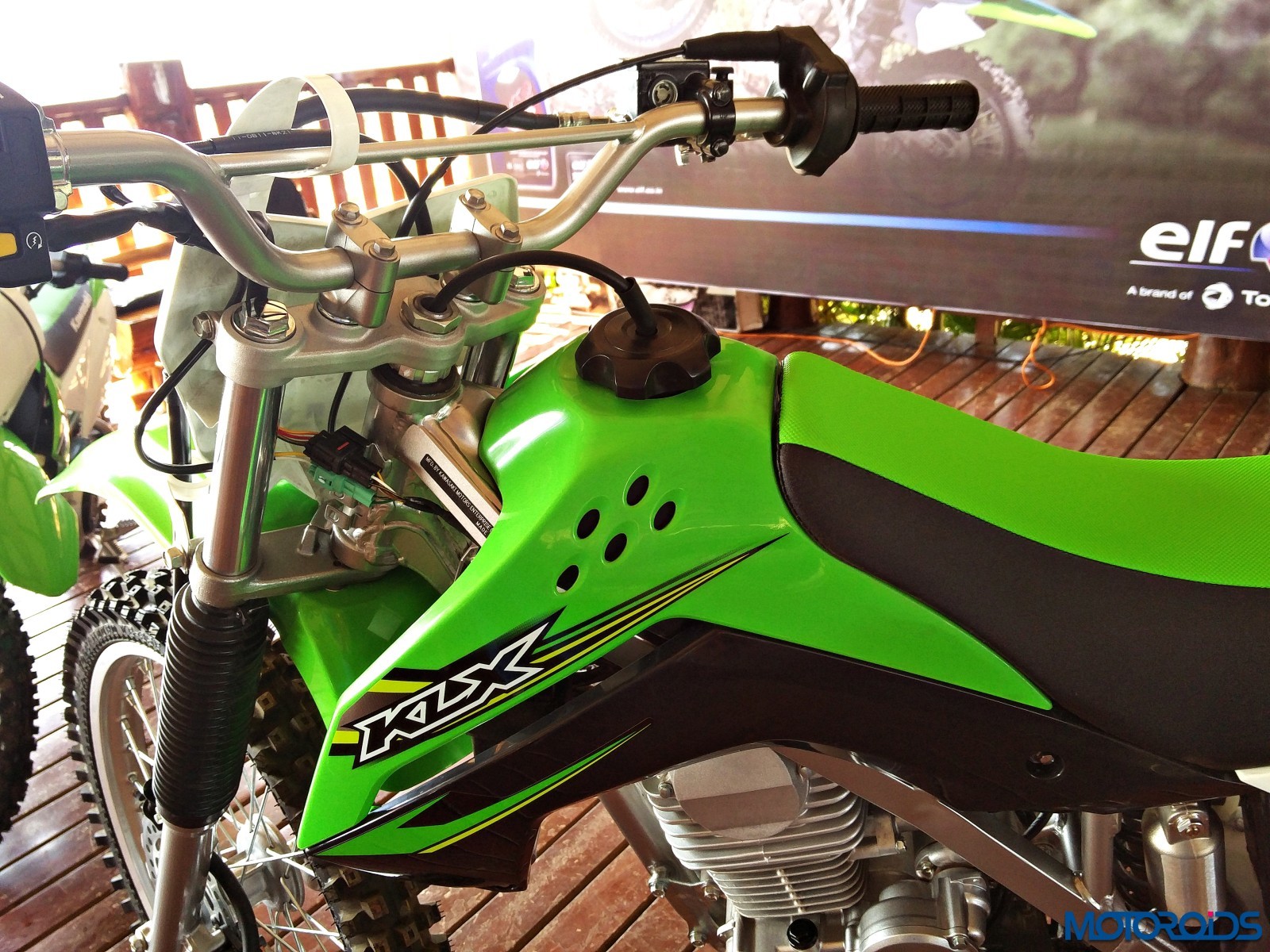 It’s an track only motorcycle so you do not get the regular equipment such as headlight, blinkers, rear view mirrors, instrument cluster or even a key hole 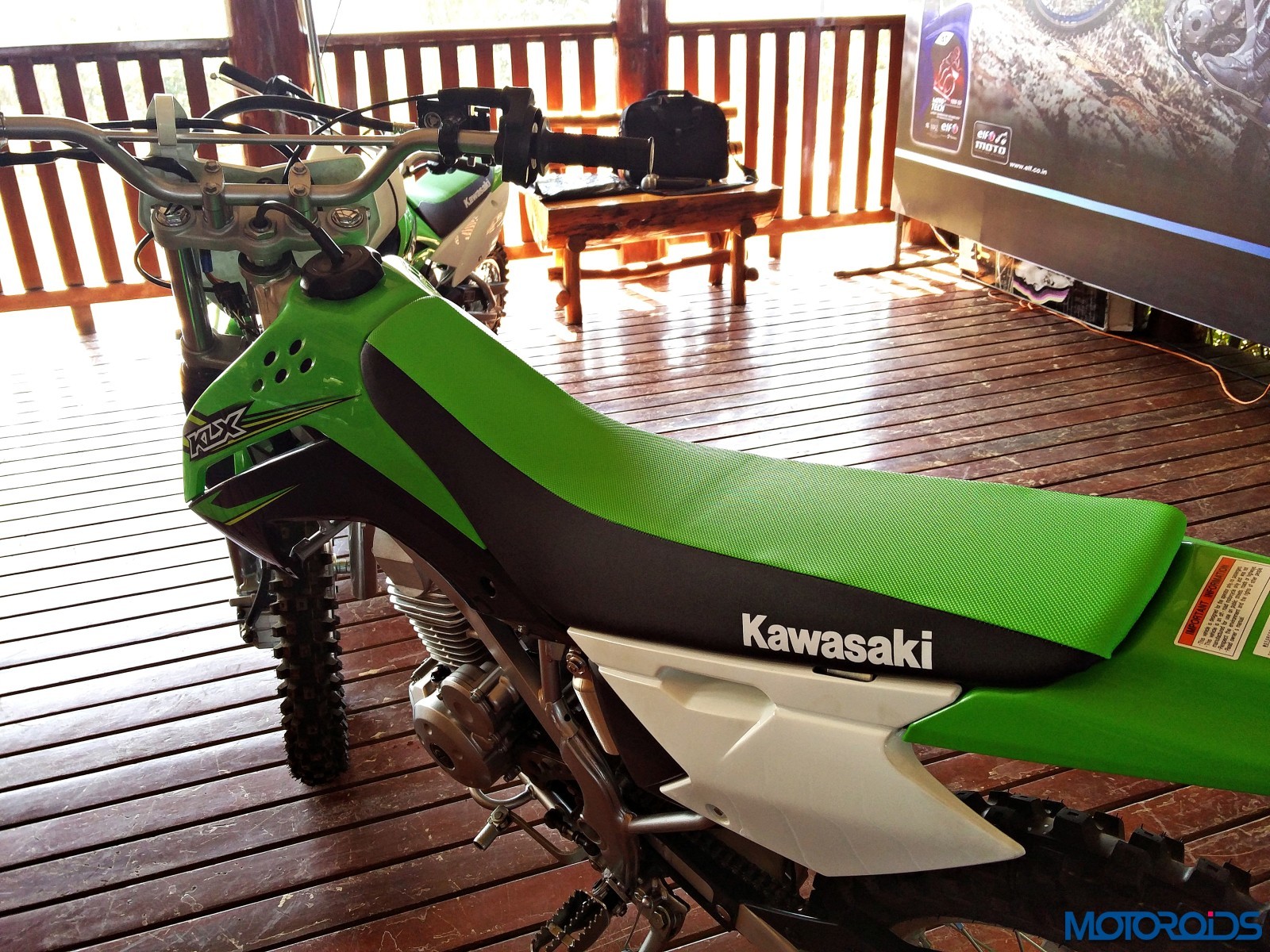 The dual tone seat looks quite good. At 860 mm, it is fairly high though. 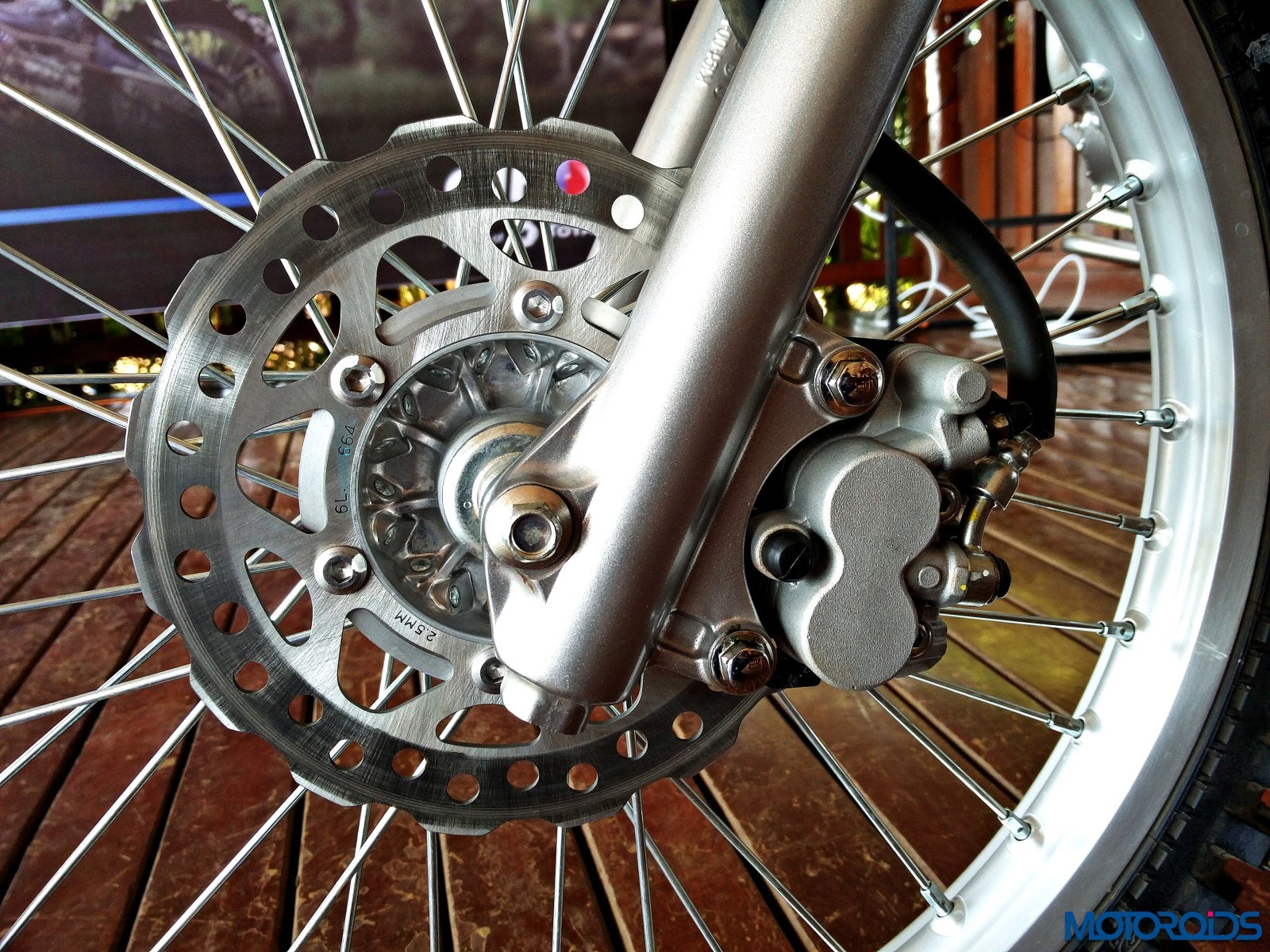 The razor sharp brakes would lock the tyres almost instantly, letting you slide into a corner with maximum confidence

How Does It Ride?

With sweaty palms, weak knees and a pounding heart, I awaited a green light from the track Marshall at the start of the track. 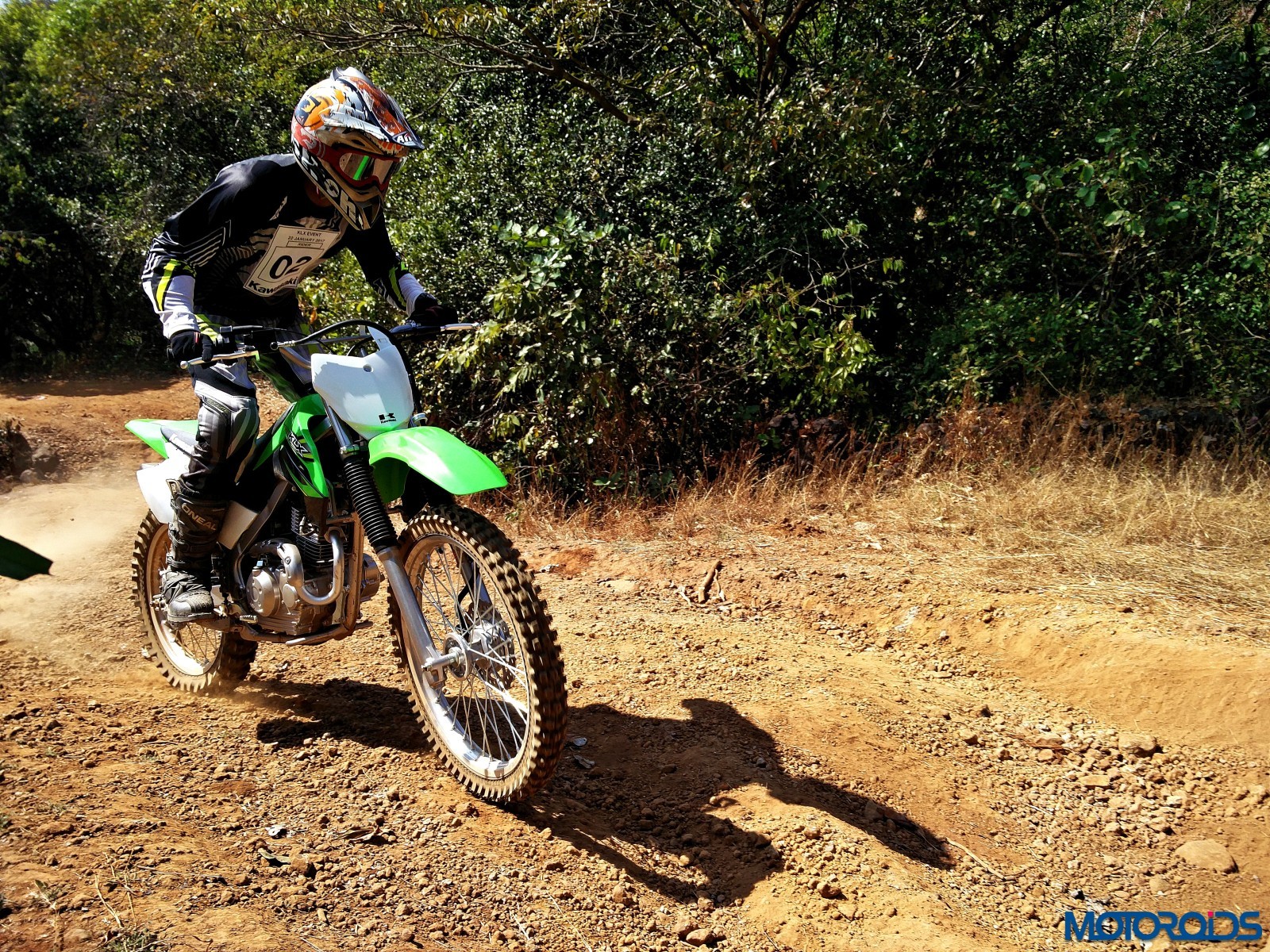 Let’s get the numbers out of the way first. The KLX140G uses a 144cc air-cooled, 4-stroke engine with a manual clutch and 5-speed transmission. Unlike the bigger KX250F, this one here uses a carburetted engine. There are no power figures to mention here but it felt fairly quick – nothing scary but still quite quick. Part of that acceleration is also due to the lightweight construct. 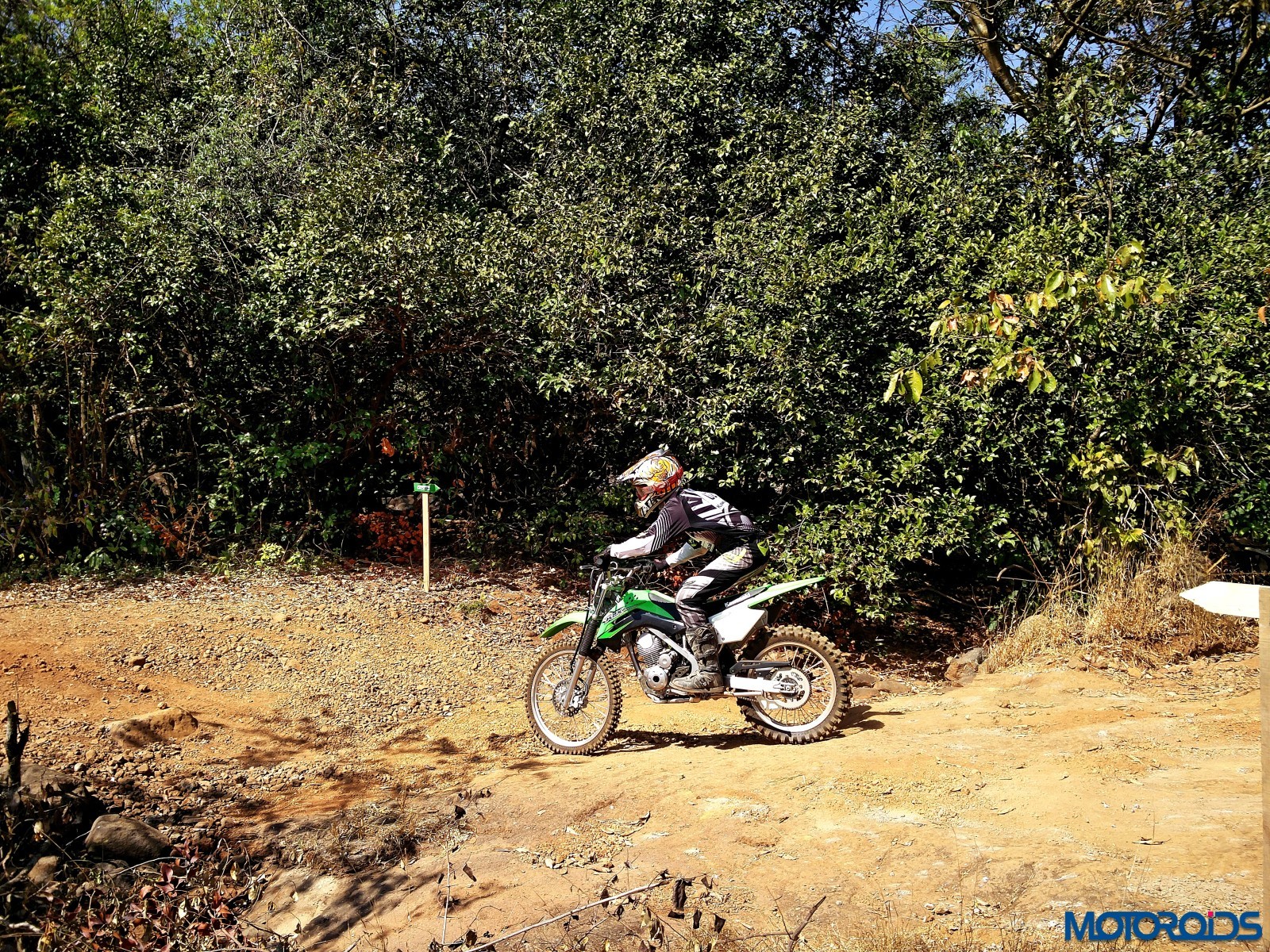 I’ve had my share of fun on some really fast bikes, some of them with a power output enough to put a lot of cars to shame but things were fairly different here. So with a little scepticism, I began the business on a fairly subtle note, not wanting to ram into the tyres that marked the edge of the track. But it didn’t take long to get accustomed to the handling, the easy going engine and the really sharp brakes on the KLX140G.

One lap of the track and I was already revving the engine to the limit (no tachometer to share the numbers though). The 21-inch front and 18-inch rear wheel, wrapped in IRC Volcanduro VE – 33 tyres squeezed their claw into the track like a fierce cat attacking its prey, giving utmost confidence to keep the throttle pinned to almost full. With a wheel travel of 190mm and 200mm front and rear respectively, the KLX140G glided over any challenge that the track threw at it. The light weight of the motorcycle comes real handy here as you can flick it with minimal effort. 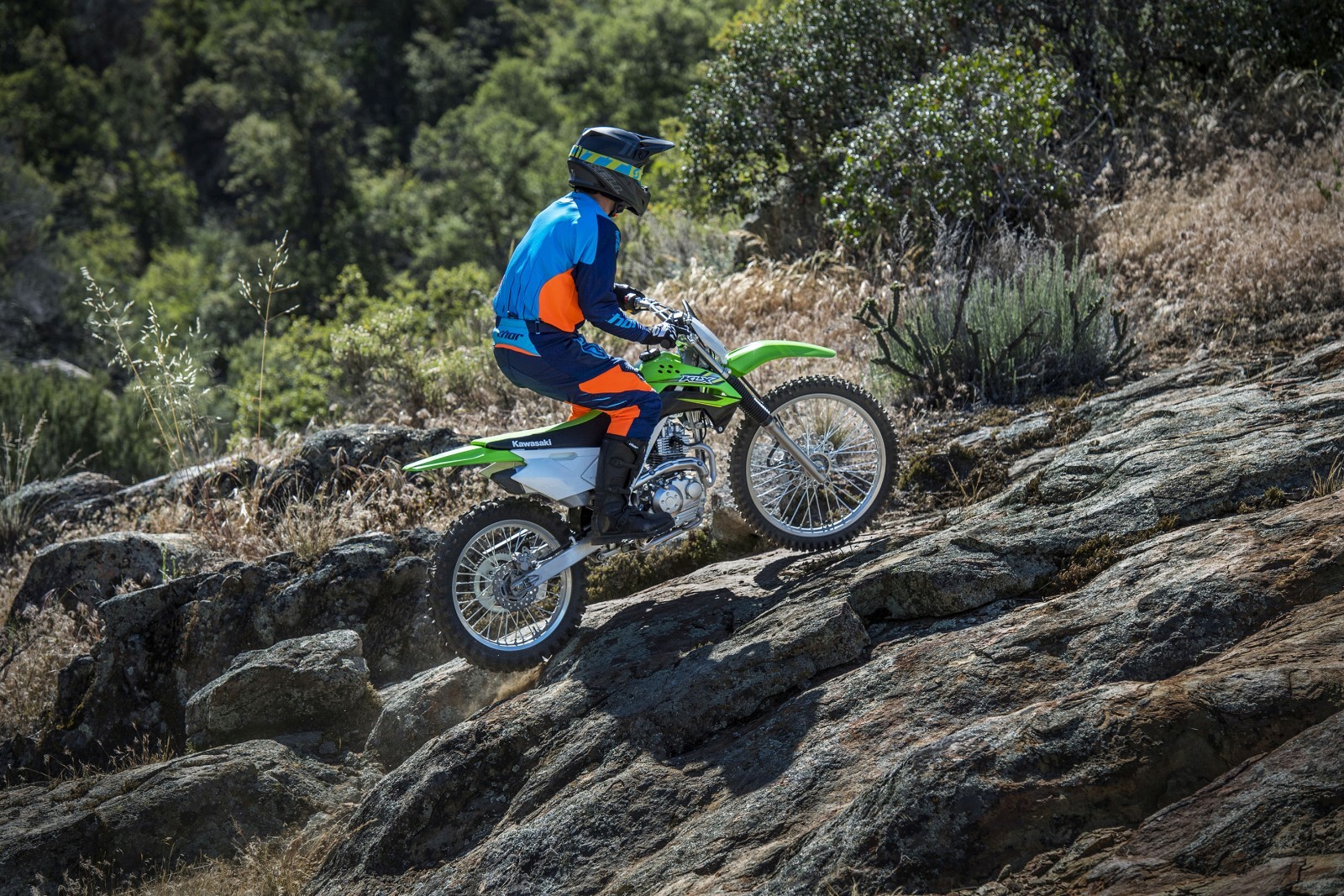 In comes the first corner again, but this time I didn’t misjudge the braking point, not dropping the anchor too early as opposed to the first lap. Braking is so sharp and precise that it’d lock the wheels almost instantly. Don’t look at it as a flaw as a seasoned rider would use the sharp brakes to slide into the corner, hard and fast, before opening the gas for another adrenaline filled stretch. 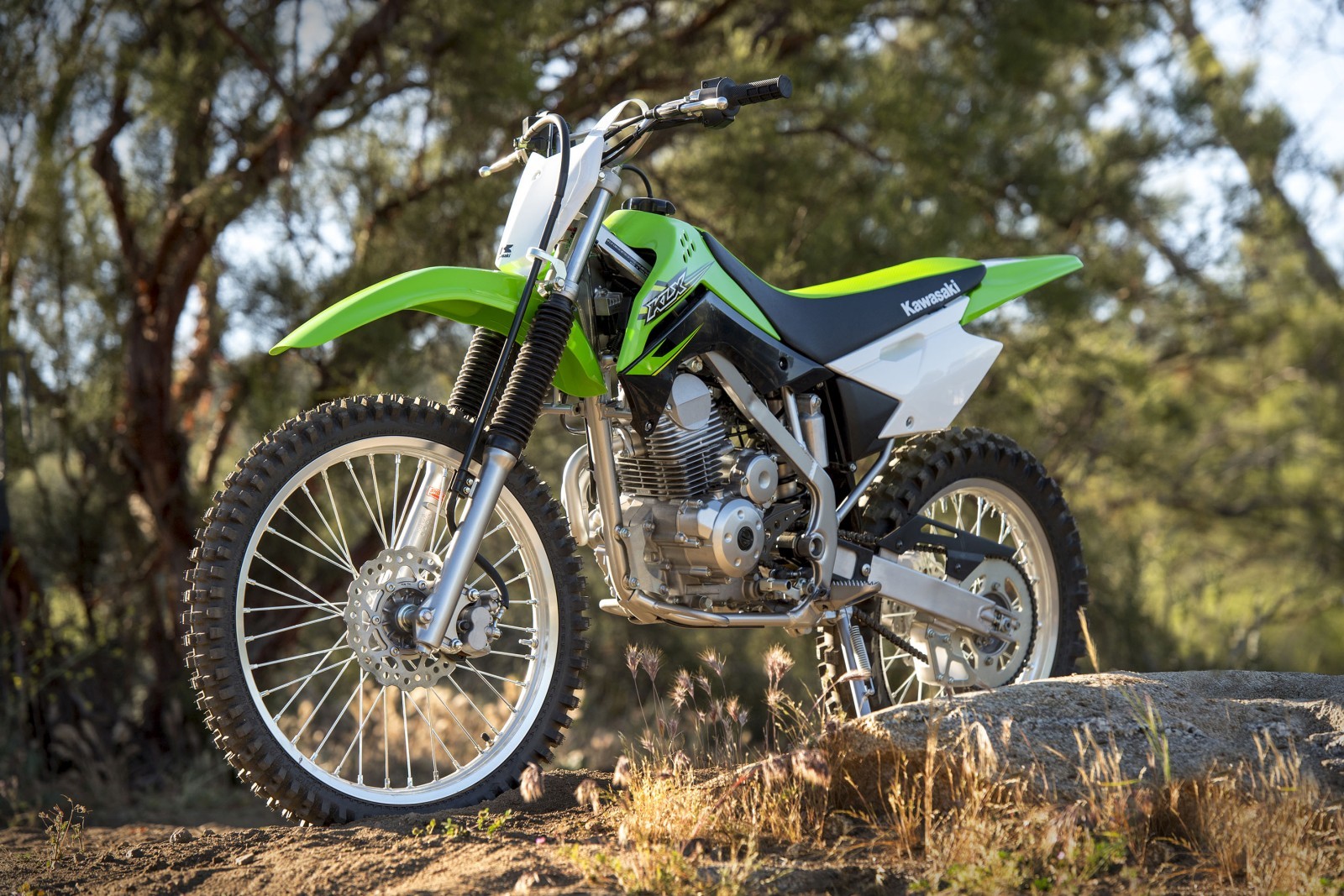 Was I happy, and more importantly without any broken bones or a bruised ego?

Yes, and yes. Well, I had just started enjoying my time on the motorcycle, with the fear and nervousness left far behind on the first lap and was really getting the feel of the motorcycle after a few laps but the Marshall had a schedule to follow. Up came the chequered flag and I had to ride out from the dirt track, leaving myself fairly high and dry, but still with a grin inside the helmet. 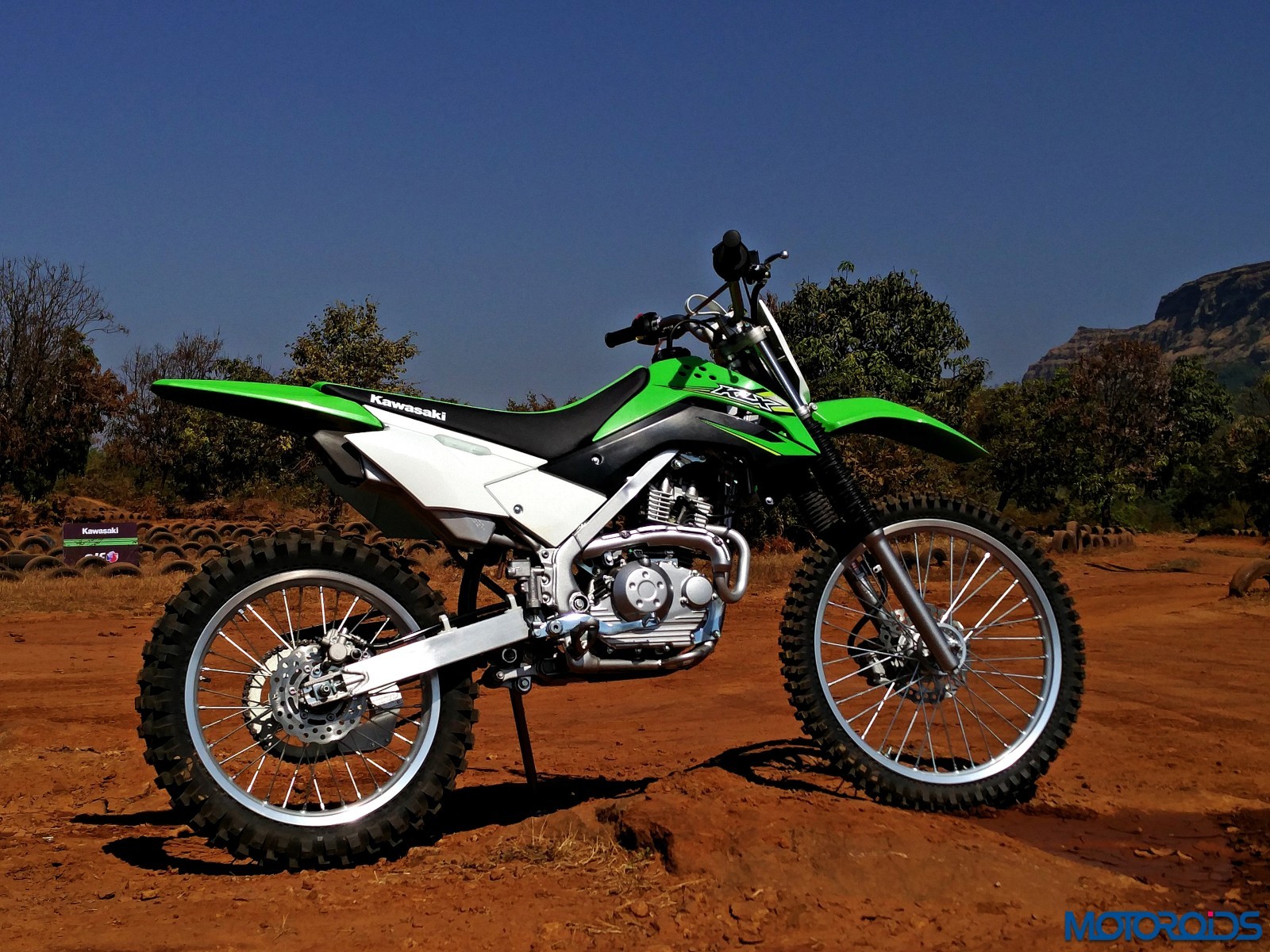 The motorcycle was meant to give me an adrenaline filled ride without breaking any bones or rupturing any muscles and I really couldn’t ask for more (except more time on the track). It’s a perfect motorcycle for anyone who’s willing to get off the tarmac but you’d need deep pockets (for it’s size) to get one. The KLX140G comes to India via the CBU route which means expensive import taxes which results in an expensive price tag. So to bring one of these machines home, you’d need INR 3.91 lakh (that’s ex-showroom, FYI) which is a fairly expensive, especially for a journalist who is (figuratively) paid peanuts for salary. 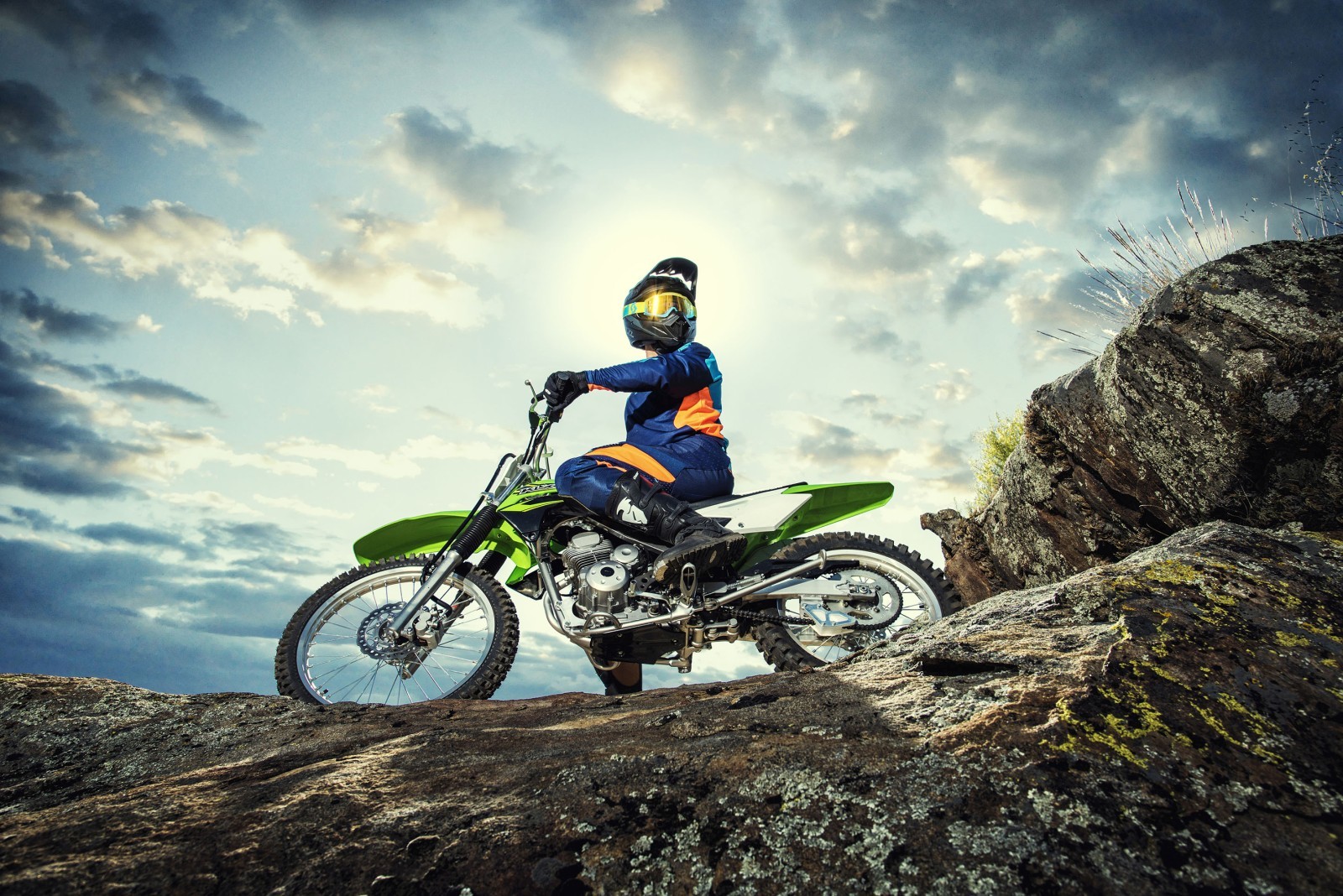 I hope to get this one here, along with the KX250F for a longer duration and on a more challenging track. Till then, I’d save pennies in hopes of buying one such machine. You can drool over the motorcycle through the image gallery below. Click here if you’re interested in finer, technical details.