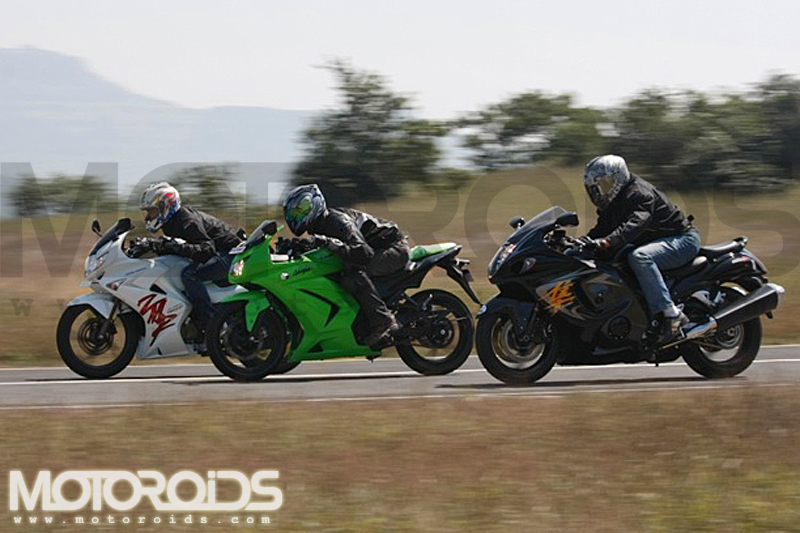 We wanted to do it with a twist. The most obvious thing any auto mag would want to do with the ZMR as soon as it lays its hands on the bike is to pit it against the Pulsar 220. At Motoroids, we don’t quite get thrilled by such straight logic, so the idea was discarded at its very conceptual stage. We have, however, kept the thought for later when everyone else would have tried their hand at it. We shall do it, but with the Motoroids touch at a later point.

The Karizma, as even my dog knows, is a great touring bike of India. With 33bhp on tap, good ground clearance and a comfortable seating position, the Ninja, looks like a formidable sports tourer too in a newly emerging segment in the country. And the Hayabusa, as even the bedbugs in my cot know, is the ultimate sports touring machine the world has ever seen. The price tags are Rs 1, 3 and 13 lakh for the three machines respectively. So how much is the real world difference in their times if you were to do a 500km trip? We thought we’d give it a try. But unfortunately, that’s not what this report is about. This is a standalone review, and for the lip smacking comparo we just talked about, you’ll have to wait till the November issue of Motoroids2 e-mag hits your inbox. So register now.
So is the new ZMR any good? Well, yes and no. Let me explain.

Introduce Papa’s Pappus to the new ZMR and they would have their mouth open in awe. They would study hard, cut their furtive porn time, think less about the Sizzling Sally who they stalk and make sure that Papa buys them one when they eventually manage to pass. Being honest, to an average Joe, the bike’s got presence – tonnes of it. But for a seasoned set of eyes, the mass bias is a little too much towards the front. Look at the ZMR in profile, and it somehow looks skinny from the rear, and a tad too heavy from the front. But then again, craning necks and turning heads is a phenomenon wherever the new flagship HH goes, at least for now. So the self-proclaimed design critics like me may just shut up. 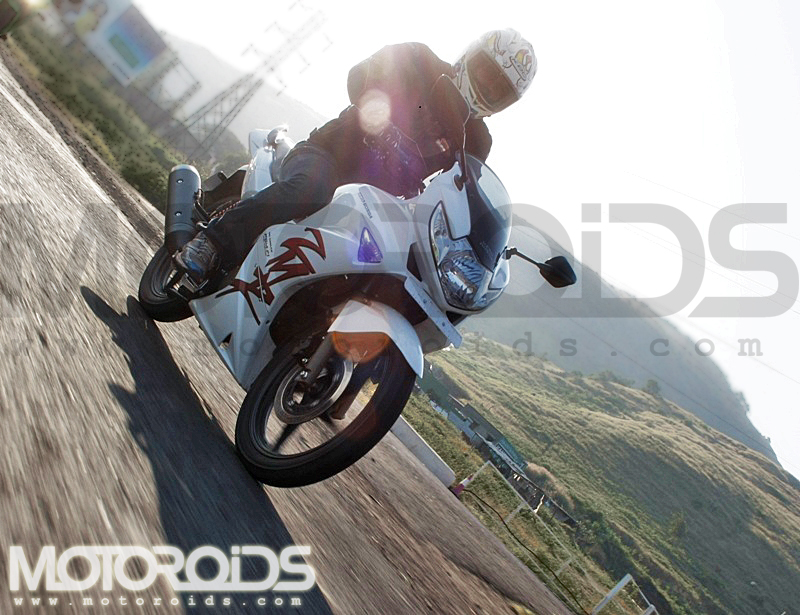 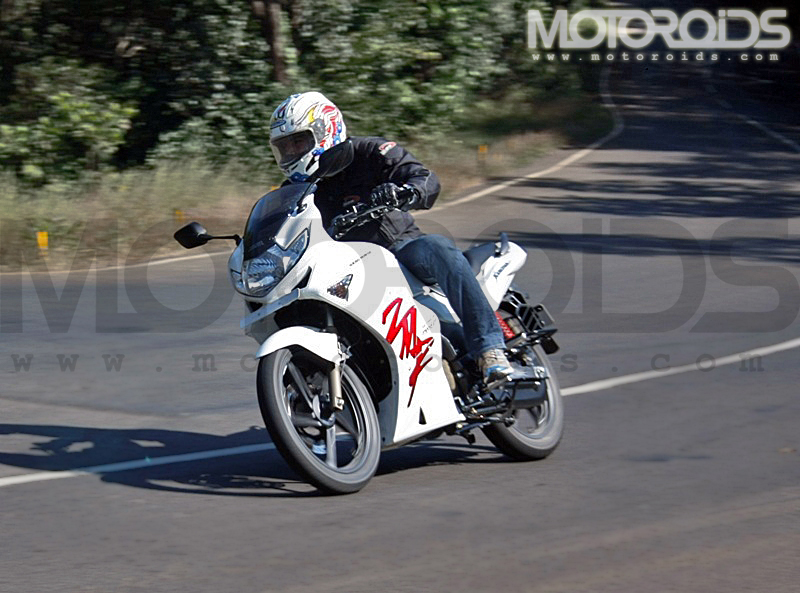 There isn’t any mentionable increase in performance either over the old ZMA, but we think the bike goes longer on every liter of fuel, courtesy the new FI system. We are still testing the fuel efficiency of the bike though, and will open our mouth once we are hundred per cent sure.

And at Rs 1-lakh, there is a lot of ‘flesh’ to flash. The mechanicals are spot on, the low-and-mid range grunt is sweet as ever and the bike would never set a foot wrong, unless you’re one of the manic types. But then there are lows too. In fact there is a whole list of good and bad things about the bike that need to be highlighted. I would have loved to use an elaborate magazine-ish road test report to describe the bike to you, but since this is web, and since me typing too much would mean that you run away, here’s the list of things that you need to know before you book the ZMR over the good old Karizma R.

1. Plastic parts – probably the only major issue with the old Karizma. The panels used to break at the frequency of my heart when I was at an adolescent age. I am afraid it’s not going to change for better, with all that extra load of plastic fairing on the front end. We hope Hero Honda have addressed the issue – still too early to pass a judgement though, so just be mindful.

2. Seat – The new seat is a different design. More comfortable, wider, with gentler slope –all good! The ZMR is EVEN MORE comfortable than the R to ride.

3. Engine – We expected the new FI unit to do the almost impossible task of improving the smoothness of the silken 220cc mill that propels the bike. Unfortunately that has not happened. The bike we had on test was making noises which were somewhat surprising considering the high standards of smoothness the Karizma has set for itself. There was a pronounced noise from the engine, and uncharacteristically the vibes in the handlebars were a little too many beyond 6000rpm. The punch and the characteristic low-mid range surge of the Karizma is still very much there though and the bike pulls effortlessly from low revs in any gear even with a pillion on. This engine isn’t a screaming hooligan, but impersonates a gentleman with broad shoulders who can deliver a punch if someone tries to mess.

4. Console – The biggest USP of the ZMR. A huge chunk of people are going to buy this bike only for its stylish instrumentation. It’s the most sophisticated and the most functional of all similar units available in the country. We love it. We are sure you will too. Unless you are one Mihir Gadre who has a bit of skepticism and criticism in store for even the holiest of entit1ies.

5. Suspension and handling – The dampers are now gas charged. And they do exactly what you would expect. They have improved the stability and comfort of the bike not only over the potholed roads, but the ZMR now feels like a more planted, more stable bike with lesser flex and twist when hurtled ruthlessly around bends.

6. Clip-ons – The riding position is better than ever. Gone is the freakishly upright seating position of the old R. The new clip-ons make you bend down a bit, lending the seating posture a much missed sporty feeling. The new position of the handlebars augments the feeling of being connected with the tar around a crooked road. We love the new inclusion.

7. Headlamp – Much better intensity and throw than the older R. The improvement is SUBSTANTIAL. We think the ZMR provides the best illumination after the P220 now. Boys in the office are crying foul over my judgement. They say ZMR is better than the P220 in terms of illumination. I disagree. They are asking for a proper, scientific shootout. I am game

8. Taillamp – Looks like a borrowed unit from the X-Treme. The LED’s look cool, and are extremely visible from a distance in the night. We don’t like the shape of the tail section though.

Should you buy it? 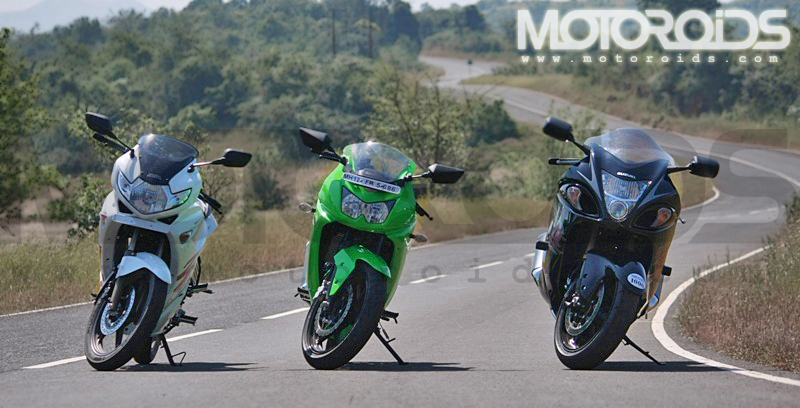