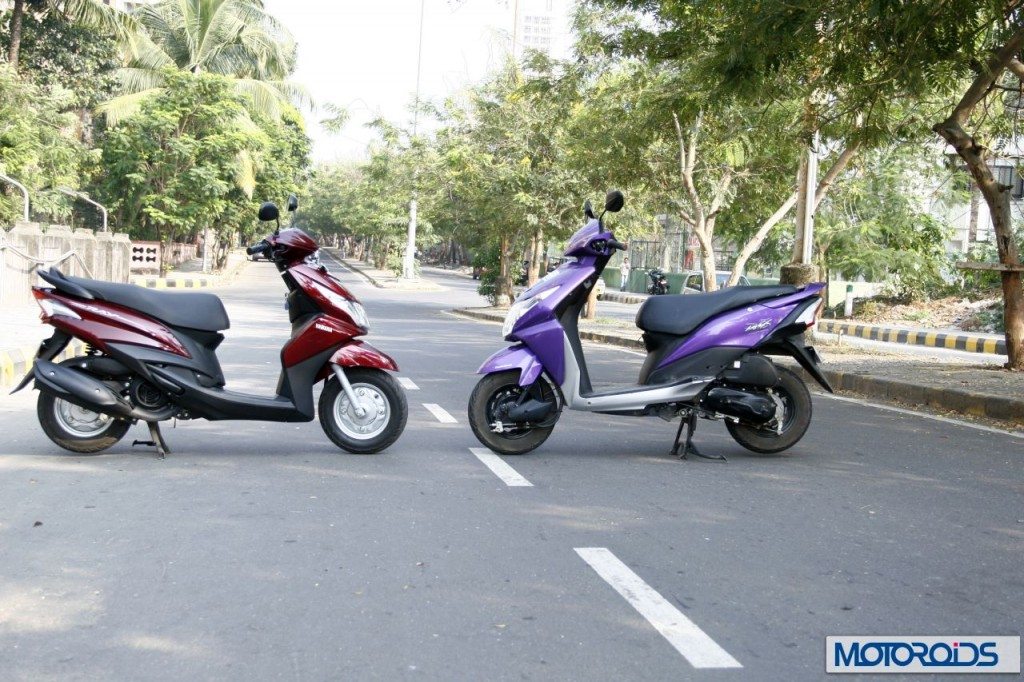 The newly launched Yamaha Ray, with its trendy design and able handling has become an instant success for the Japanese bike maker. But does it match up with the Honda Dio?

Now let’s quickly get back to comparing the two scoots 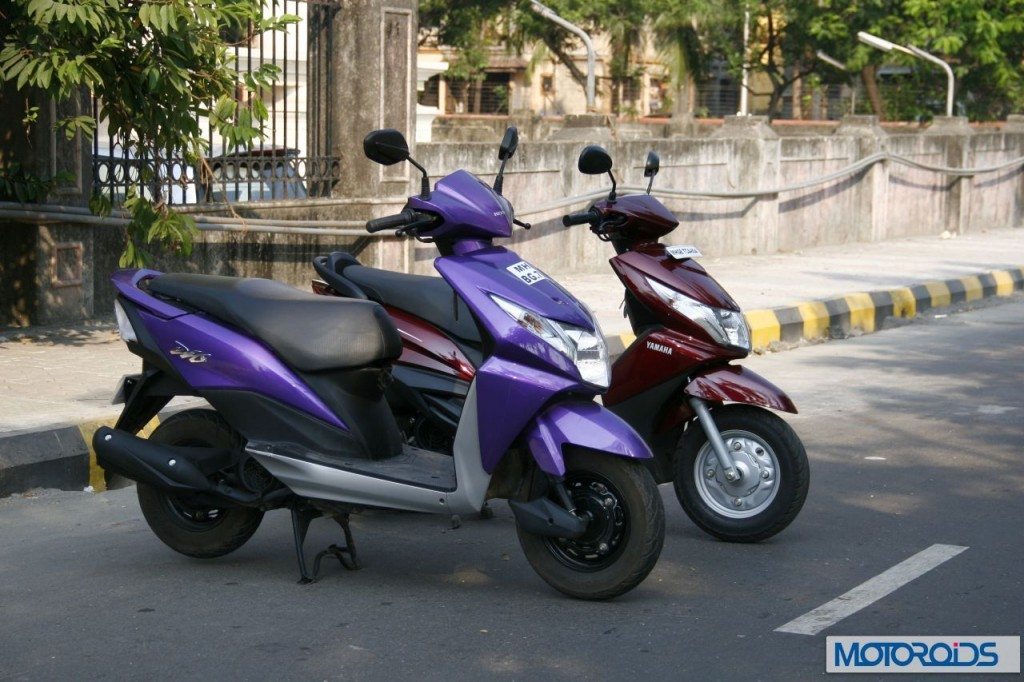 The Honda Dio, in its earlier avatar too was quite a trendsetter. Without a doubt it was the most modern looking machine on the market when it went on sale. Even in its second iteration, the Dio manages to carry that funky theme forward – much has been changed, without changing the essence of the design, quite a feat! The Dio’s design is more about treading the bold path, thumbing the nose at convention – it’s all about slashes, angles and sharp edges, and yet, all of it comes together so beautifully, it really makes heads turn.

The Ray, on the other hand, is more balanced and sophisticated. It isn’t conservative, but it isn’t a rebel like the Dio either.  With its headlamp on the apron, it is similar in concept to the Dio. The lower front apron looks beautiful when viewed from the front three quarters. The Yamaha logo lends it an air of internationality. Unlike the three-tone scheme of the Dio, the Ray has a combination of two colors. We also preferred the silver finish wheels of the Ray to Dio’s black footwear.

It’s difficult to choose a clear winner here. The Dio is a radical – it’s funky, outspoken and lively. The Ray is more about refinement and balance. Decide what kind of a person you are to favor any one of the two while comparing Honda Dio Vs Yamaha Ray. 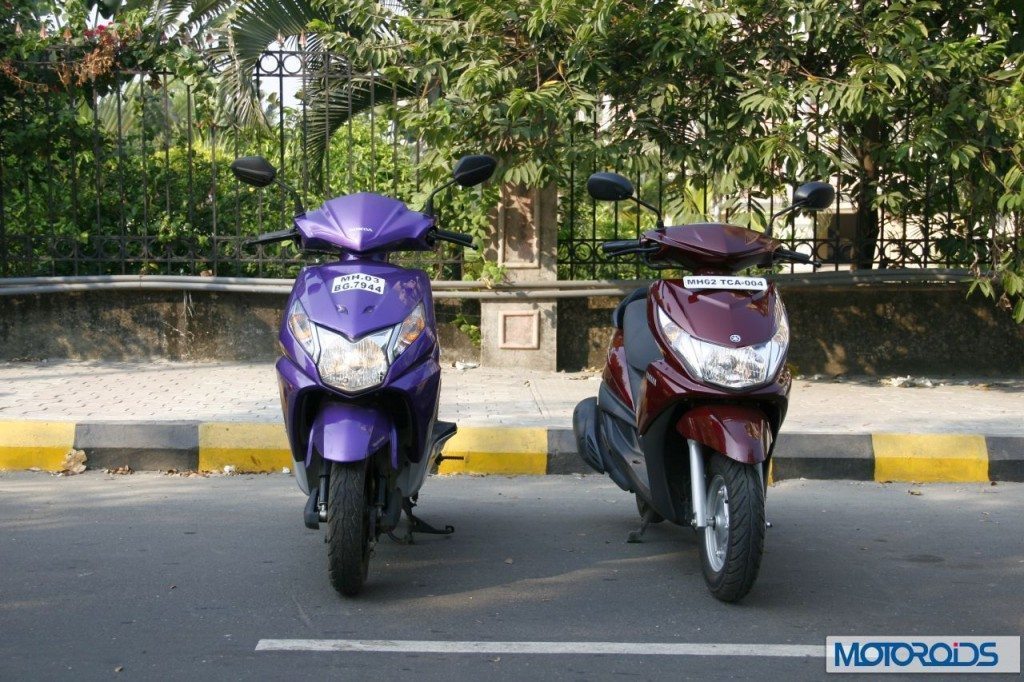 The Dio is a unisex scooter, while Yamaha are marketing the Ray as a women centric machine – and the logic behind the positioning is apparent as soon as you swing a leg over the two scoots. The Dio has a higher seat height, looks bigger from the rider’s position and feels more substantial. The Ray, on the other hand has the seat height favoring the shorter heighted fairer sex, and wouldn’t look intimidating to even the first time rider. We had a few female riders on our panel, who instantly chose the Ray over the Dio after taking a quick spin, for their toes could easily touch the ground on the former and they ‘felt’ that the Yamaha machine was relatively easier to handle.

The other important differentiator is the under seat storage. The Dio has a major advantage here, being able to swallow a full face helmet without a burp. The Ray can barely fit a half-face lid, but tries to compensate by offering two small cubbyholes in the front apron, handy for putting a cleaning cloth or any other odds and ends.
The Dio’s seat fabric is rather slippery, letting you slide forward under harsh braking. This could be precarious under certain circumstances. The pillion foot-pegs are not very convenient for the passenger either. The Ray offers a grippier material for the seat and a proper set of foot-pegs. 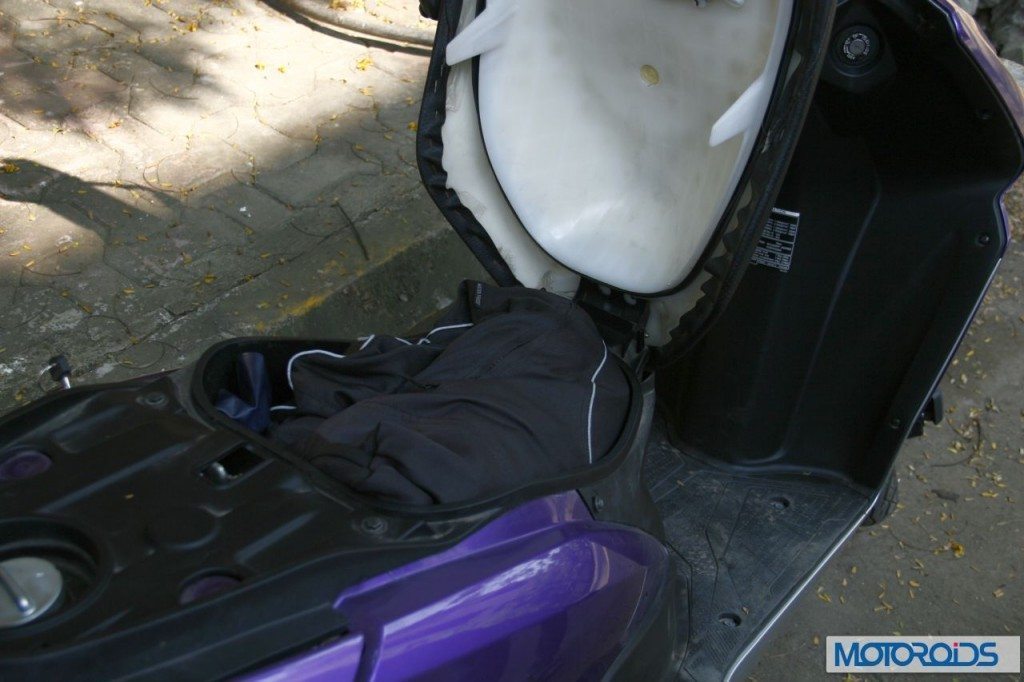 The Dio doesn’t come with a side stand as standard equipment; you have to buy it as an accessory, which is not the case with the Ray. A side stand is a very important feature for scooters which are used extensively by ladies. We are strongly of the opinion that Honda should offer a side stand as a standard accessory.

Of the two, we found the headlight of the Ray better than the Dio, with better illumination and spread in the nocturnal hours.

In terms of other features, there’s isn’t much to differentiate the two machines. There is a difference in the suspension though, but we’ll talk about it in the Ride and Handling section. 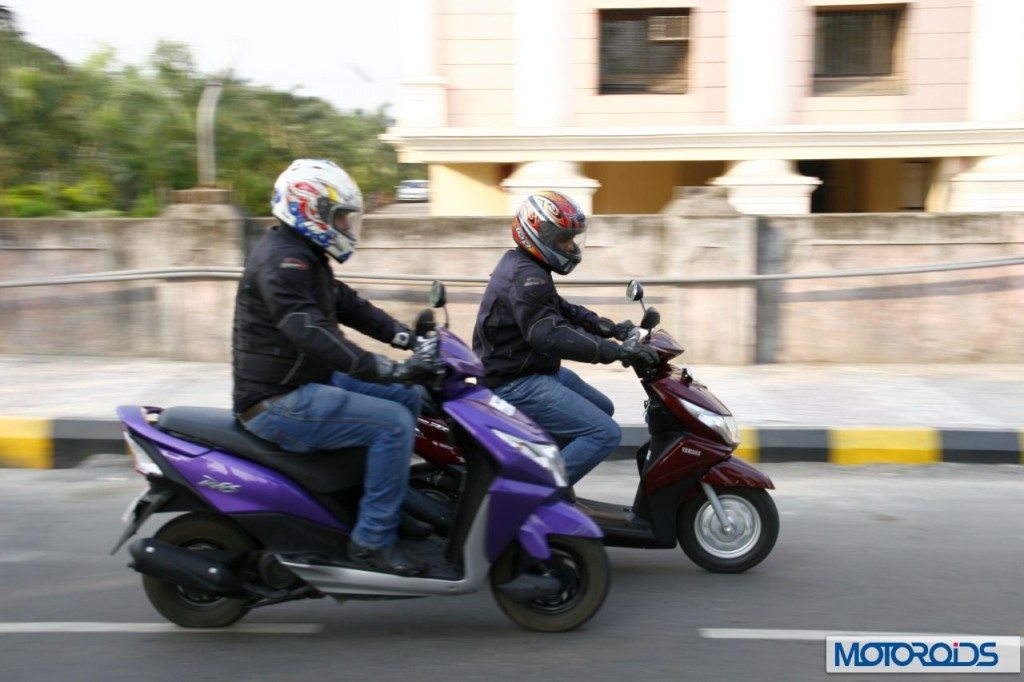 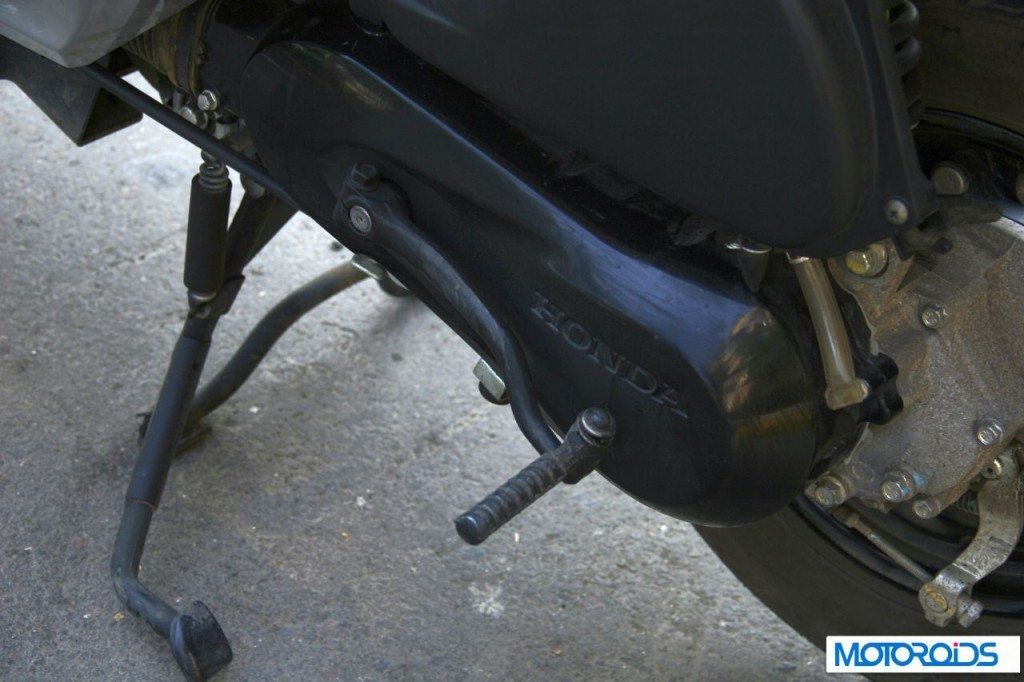 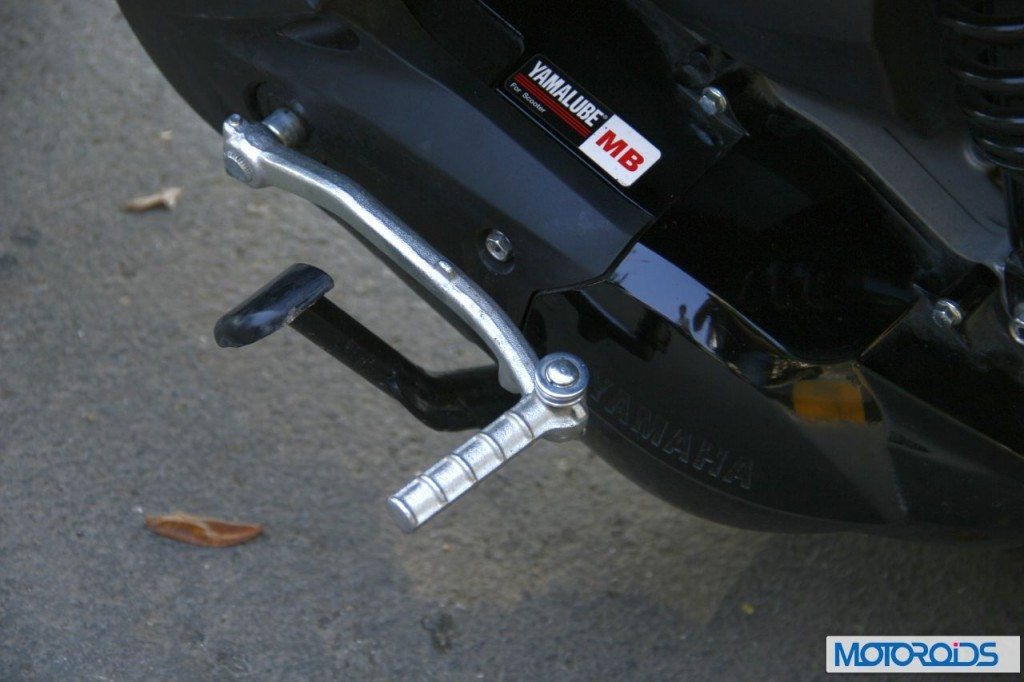 Both the scooters have ample arsenal to power your daily commute. Interestingly, both the scooters exhibit traits typical of their respective manufacturers. The Ray is revvier, with a relatively peaky power output and an engine and exhaust note which has Yamaha imprinted on it. The Dio has a more spread out power delivery and somehow feels more assertive than its new rival. The engine sound on the Dio never feels strained, even at the peak. The Ray, however, feels a little worked out when you take it to the limit.

The new Dio is quick off the line, with a minor advantage over the Ray. The Dio emanates a relatively throatier, more muscular note, as opposed to the slightly whirry sound of the Ray.

The Dio, being a unisex scooter is meant to haul heavier weights. The Ray, being targeted specifically at women, can do with a little less spunk. None of the scooters feel underpowered, but the Dio does have a perceptible advantage over the Ray in terms of acceleration across the rev range. 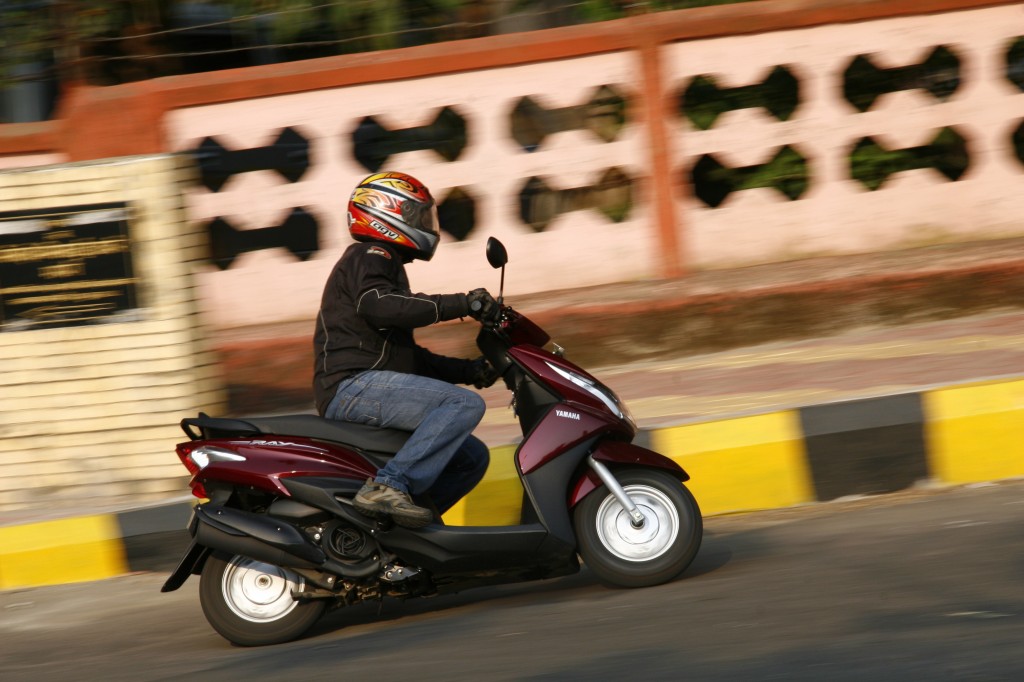 If the Ray loses out by a whisker in terms of performance, it claws back lost ground on the handling and braking front. While the Dio is a very well behaved scooter itself, with one of the best engineered underpinnings in its class, the Ray nudges ahead with even better body behavior at speed and around corners. Leaning the two scooters around bends remains a rather breezy exercise with no surprises or uncertainties. The Ray, however, feels better balanced and inspires more confidence.

The Dio comes with Honda’s much publicized Combined Braking System. However, as we tried to bring our test steeds to a halt from high velocities, we realized that the Ray offers sharper, more assured braking with ample bite and better feedback. We cannot be sure, but this may have been a problem specific to the test Honda machine we got, which was a thoroughly used unit unlike the Ray which was spanking new. Even with its sufficient stopping power, the Dio could not quite match the impressive power and feel of the Ray’s anchors. 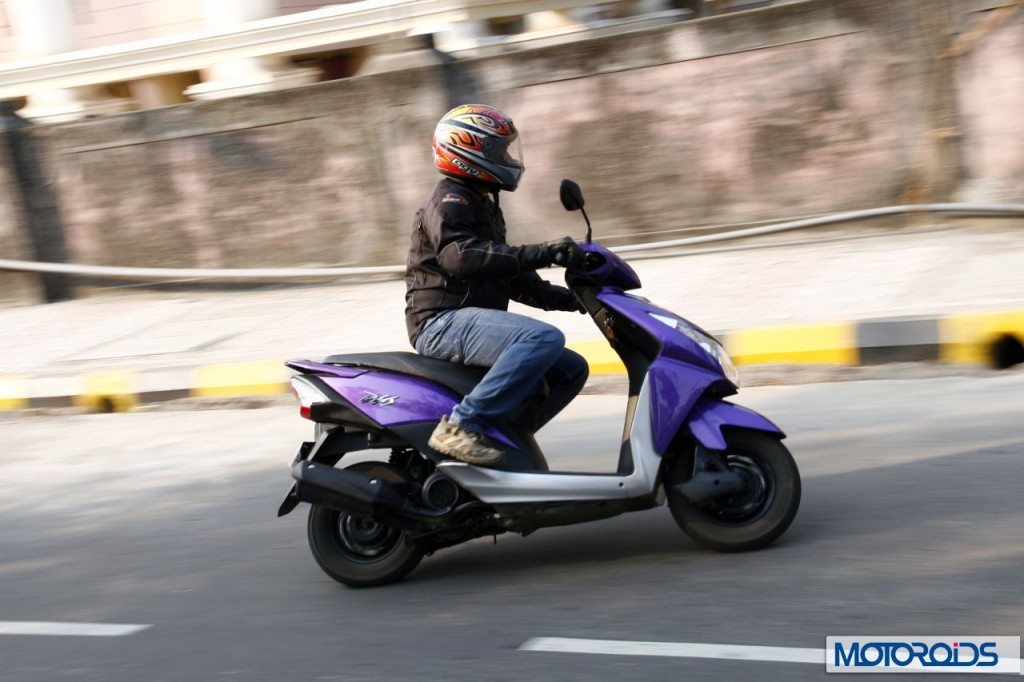 Much of the Ray’s handling magic is attributed to its suspension, which, while not uncomfortable by any measure, is relatively stiffer. Dio’s ground clearance higher too at 160 mm, while the Ray stands at 128 mm. The Ray feels tauter than the Dio, and makes you to swerve / lean it with more confidence. The tighter setup has its downside too. The Dio handles ever-present undulations on Indian roads better and doesn’t lose composure over rough surfaces. The ride on the Ray is relatively skittish, especially without a pillion.

The Dio amazes you with its qualities, it always has. But it amazes you even more when you look at its price. For Rs 42,000ex-Delhi, it’s cheaper than most of its competition by Rs 2-4k. Honda’s cost of ownership is also one of the lowest in the industry, and that should give a bit more reassurance to the prospective buyers. You’ll have to pay a bit extra if you want that side stand though.

On the other hand, the Ray retails at the price of Rs 46k ex-Delhi. That price may sound on the higher side, and it is, but the fit-finish and design of the Yamaha Ray makes it look like a premium, international product right from the moment you see it from a distance. 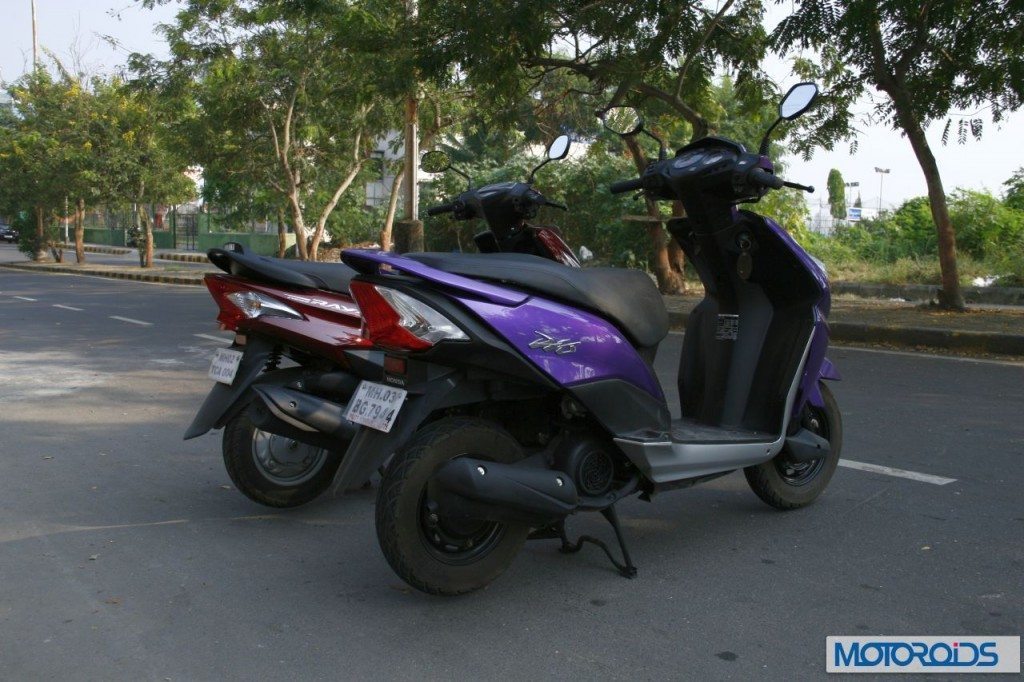 The Dio has always been a class act, extremely tough to emulate. Many scooters have tried to spar it out with this funky scoot, and most of them have been beaten black and blue. The Ray, however, comes across as a genuine competitor to the good old Honda. Price and performance are two areas where the Dio still has a marginal advantage over the Ray, but if you consider the specific group that Yamaha is targeting with the Ray, this Yamaha comes across as a better product.

As many would argue, the Ray may very well pass as a unisex scooter. If that happens, we have a clear winner here, as the Dio, with its better power, matching looks, quality and lower price has an edge. However, if someone from the fairer sex has to choose between the two, we would still recommend the Ray for its friendlier demeanor, shorter seat height and nimble handling.