Twist of the Wrist 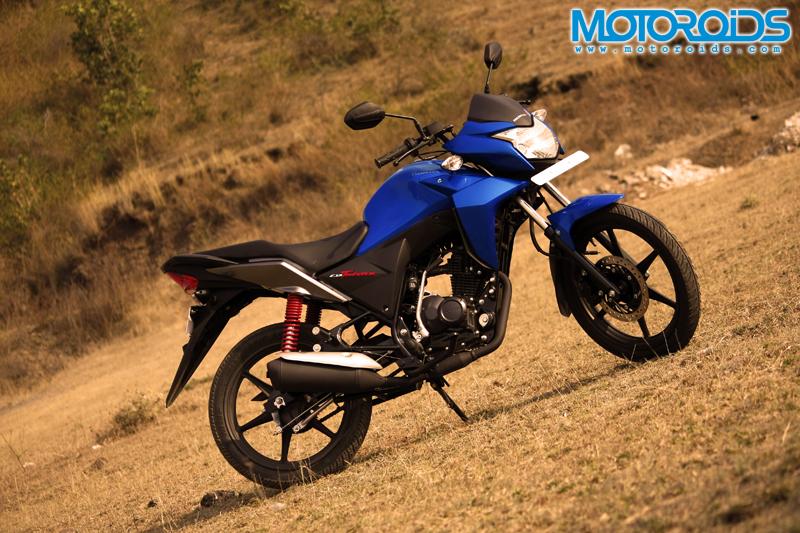 Take one glance at Honda’s VFR1200F or the new Fireblade and you know that these artistic creations epitomize the bike maker’s ‘The Power Of Dreams’ tagline. These machines are the kind of stuff that petrolheads’ dreams are made of. However, unlike its parent, Honda India seems to be following a different philosophy – which reads something like ‘The Power of Creating Nightmares’! Ever since they went independent in India, their product portfolio and its roadmap has been a nightmare for the competition around. Take the example of the Activa which came in when the scooter market was dying, or the Unicorn which came in when all of us were expecting a commuter from Honda, or the Shine, the Stunner, the Dio – all these machines either sidelined the market leaders to claim the lion’s share or created a totally new market segment to excel in. So when we heard the news of a 100cc ‘fun’ bike from Honda, we weren’t quite sure of what to expect. 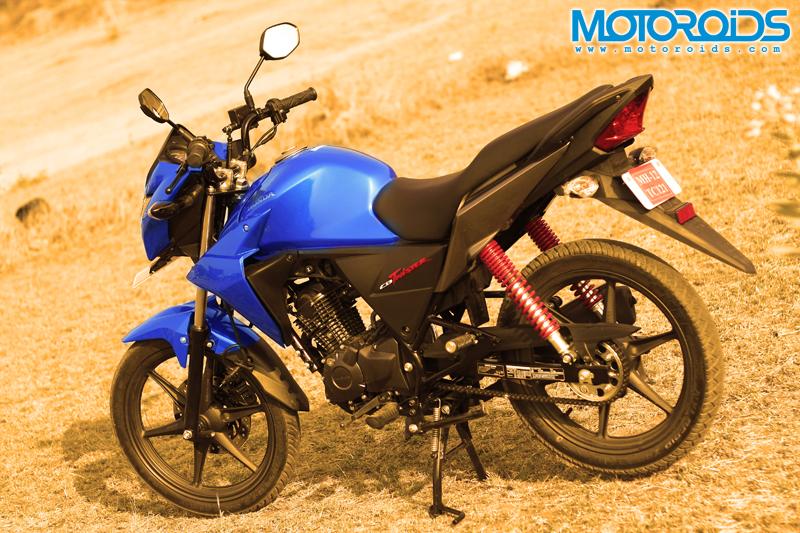 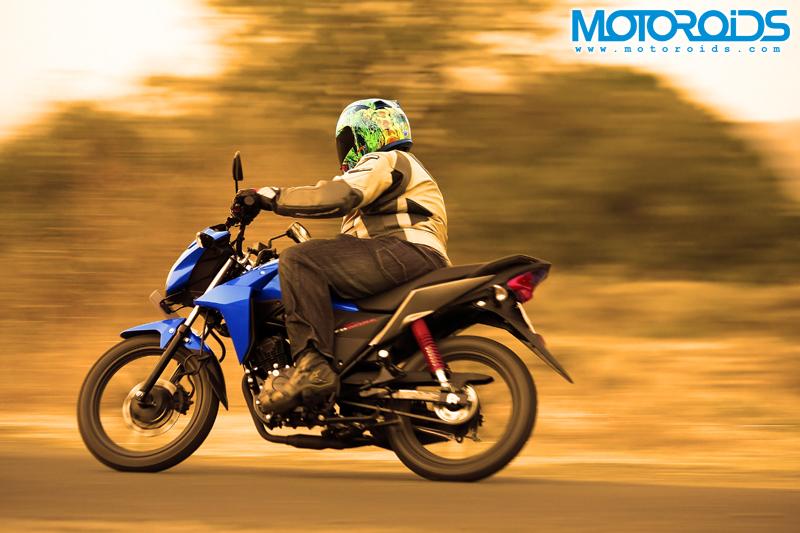 Until we got our hands on HMSI’s new born baby that is! Enter the CB Twister. Right from the first glance the baby Honda means serious business. Borrowing cues heavily from the CB1000R, the Twister has similar floating panels, rakish lines, a stubby exhaust and a diminutive form. The only design element common in the Twister and the rest of the 100cc crowd is the plain vanilla headlight – but its engulfed so well within the CB-esque bikini fairing that indentifying its old school design is as difficult as spotting the Camaro windshield on Bumble-Bee’s robotic avatar. 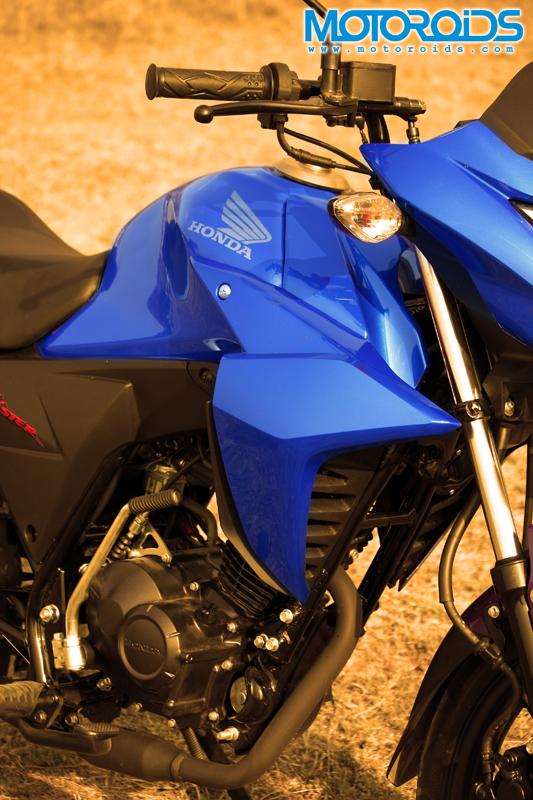 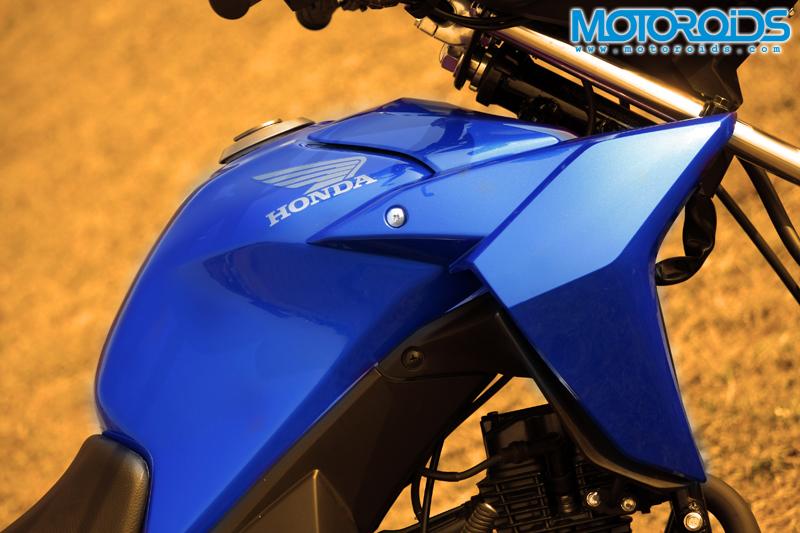 The large tank adds some muscle to an otherwise rakish design 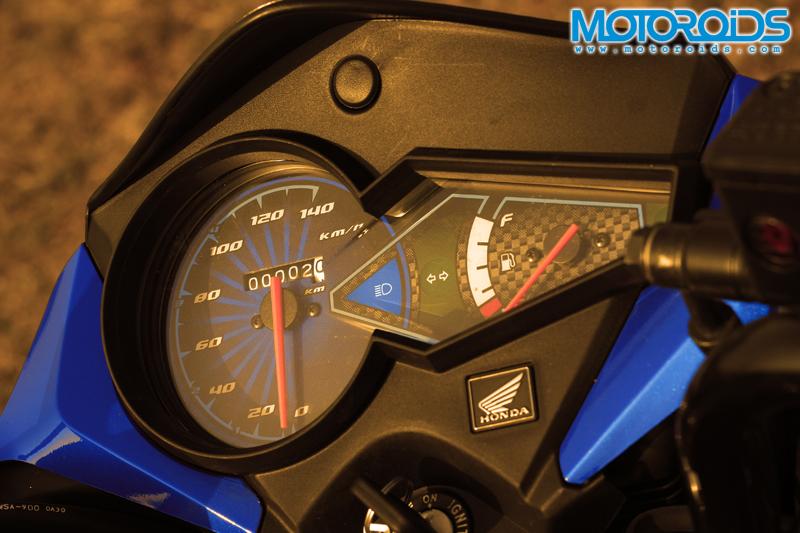 The console looks funky, but we would’ve liked a tacho, trip counter and a digital readout for the odo, fuel guage etc as well. We just can stop wishing for more, can we?

The bikini fairing houses the funky console but I would have liked a tacho in there too, considering the Twister is a ‘fun’ bike. If the Mahindra Rodeo could, the Twister can too! The relatively large tank adds a muscular character to an otherwise sharp design. In fact, it’s left enough beef for the designers to put in a wider seat as compared to a conventional 100cc machine. But just like most other low-end bikes, which borrow design cues from their multi-cylinder siblings (e.g. R1/R15, FZ1/FZ16, Varadero/Karizma etc.), the Twister’s design too hints at emptiness with its slim tyres, even slimmer forks and a puny engine. 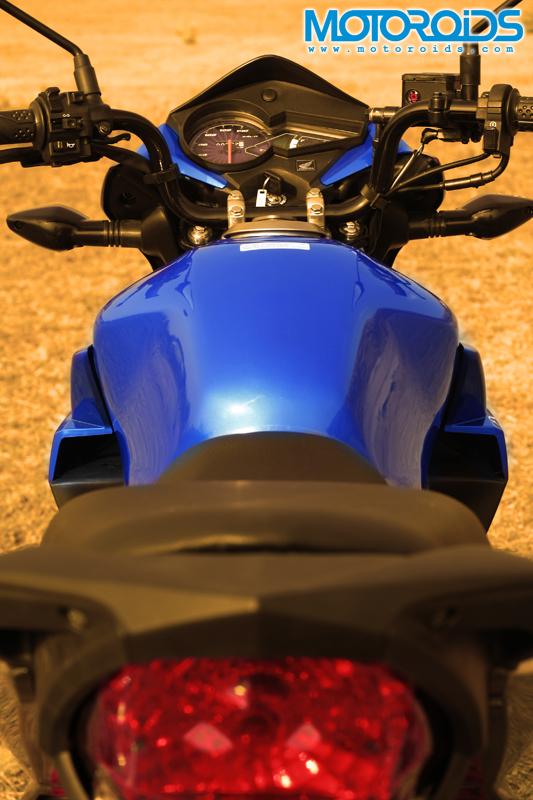 The wide seat offers excellent comfort, but the same cannot be said about the ride quality 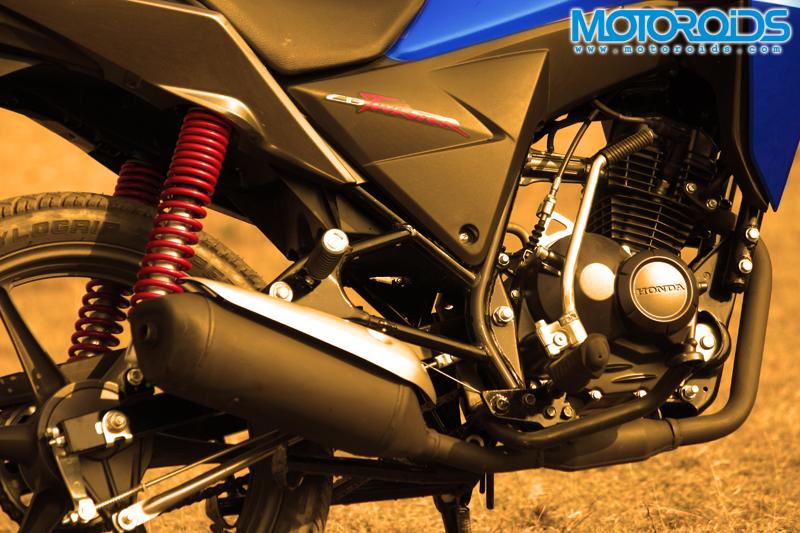 The stubby exhaust can looks fresh, but not as radical as the other ‘fun’ bikes in Honda India’s product portfolio

Nevertheless, these tiny components don’t fail to deliver what’s expected of them. Take the Twister out on the umm, twisty roads, and she doesn’t feel like a 100cc bike at all. Like any other Honda, it will stick to the line that you commanded it to take and will only budge if you are A. trying to be Garry McCoy, B. believing gravel to be a friend or C. are as fat as me and trying to throw your weight around, rather optimistically. The bike weighs a little more than me, which means throwing it around in corners is no big deal. The same phenomenon translates into easy flickability in urban traffic. 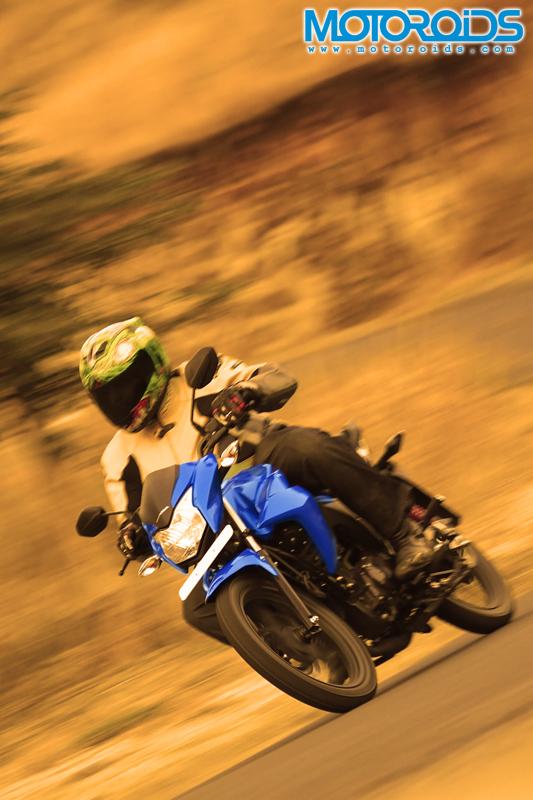 Being a Honda, there is no doubt that the Twister is rock solid in the corners. But straight line? Read on… 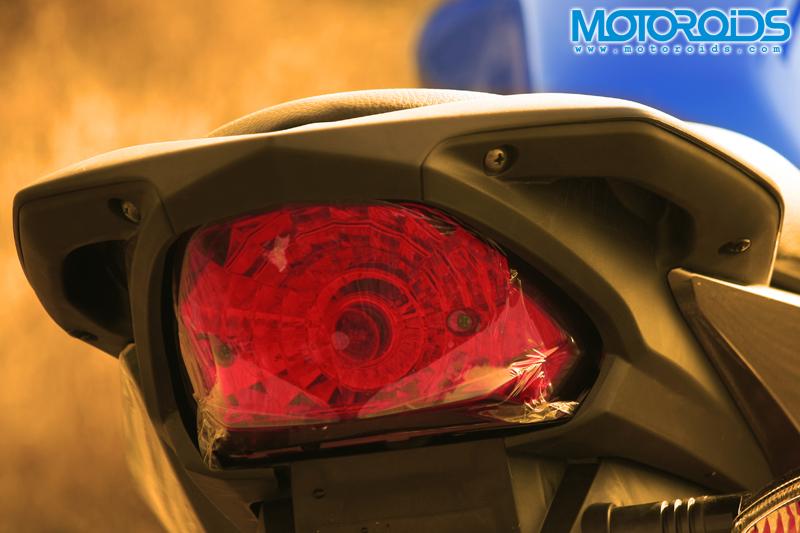 The taillight takes inspiration from the Shine’s unit. The innovative grab rail feels ergonomic, but the plastic looks cheap in flesh 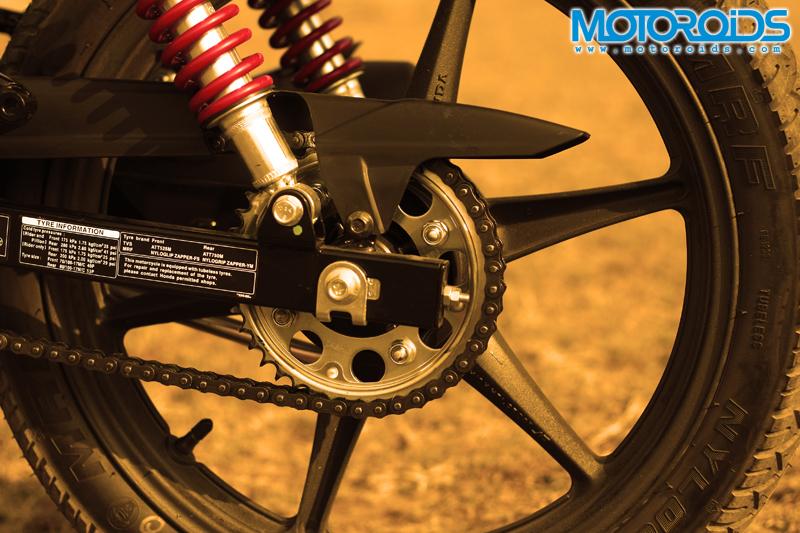 Box-type swingarm on a 100cc machine? No wonder she corners that well! The rear tyre however is a big disappointment – blame that to the lack of the centre groove, which takes a toll on the braking, acceleration and wet weather performance.

The lightweight construction further helps in squeezing more kilometers out of a litre of fuel. Our test bike was running in reserve all along and did not dry out even after 50 kms of combined riding in the city and the twisties (yes, actual figures will come in the full road-test). Open highways aren’t exactly the natural habitat for the CB (city bike) and its evident right from the word go as the engine as well as the dynamics run out of breath as it closes in on the ton.  And should you panic when things go a little weary, the brakes aren’t one bit as confidence inspiring as you would expect from a Honda. The Twister’s disc-brake system lacks feedback and feels as spongy as a pair of overheated drum brakes. And especially after the kind of feedback you get from the R15 or the Pulsar 135, this unit feels as if it came from hay-days of the Splendor. 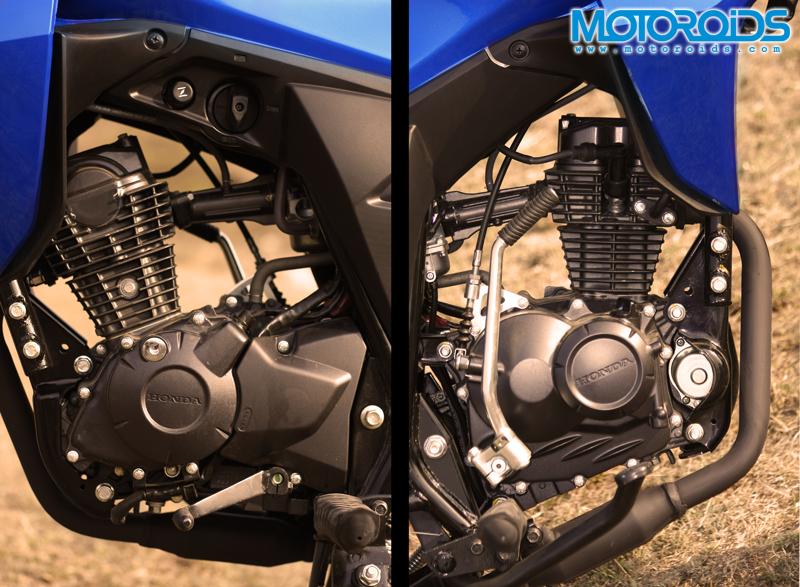 This engine has no relation to the age old mill that the Hero Hondas have been running on for the last two decades. Is the new Honda engine better than the old school one then? Read more on that in the March issue of the Motoroids2 e-mag! 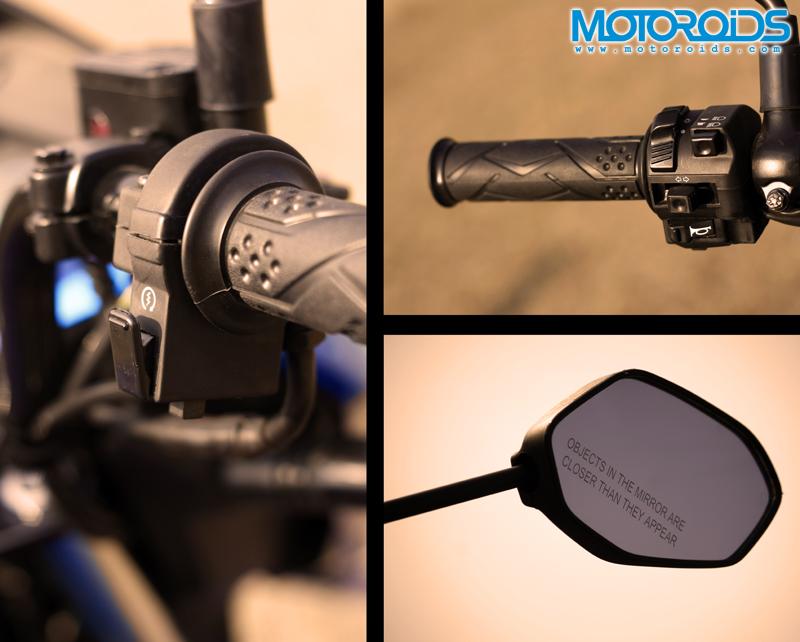 (Clockwise from top): Same old switchgear from the Hero Hondas. The polygonal mirror gels well with the Twister’s rakish design theme, but the plastic quality isn’t top notch. That’s one unconventional starter button! Notice the gaps in the switchgear mounting. 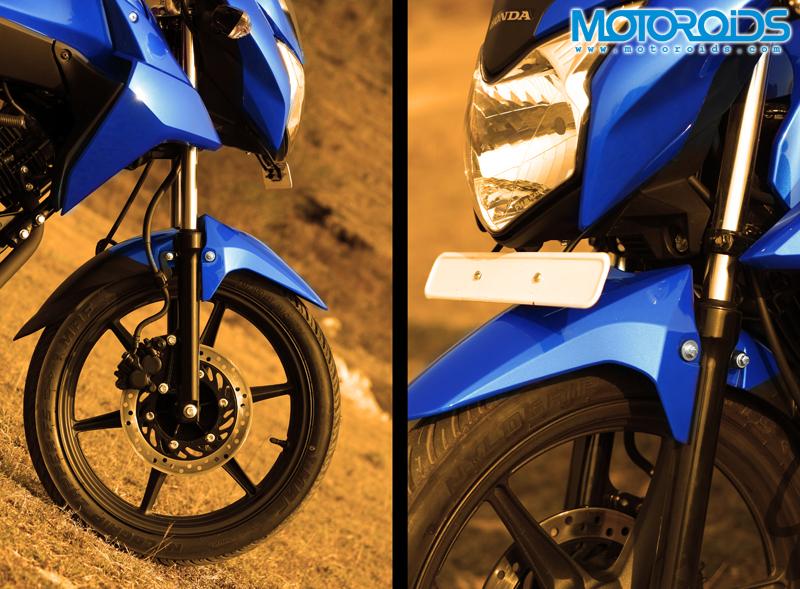 (Left-Right): Six-spoke alloy is a new design. The registration plate keeps hitting the front fender under heavy braking or in deep potholes – this problem has been around from the Karizma days and still hasn’t found a solution. 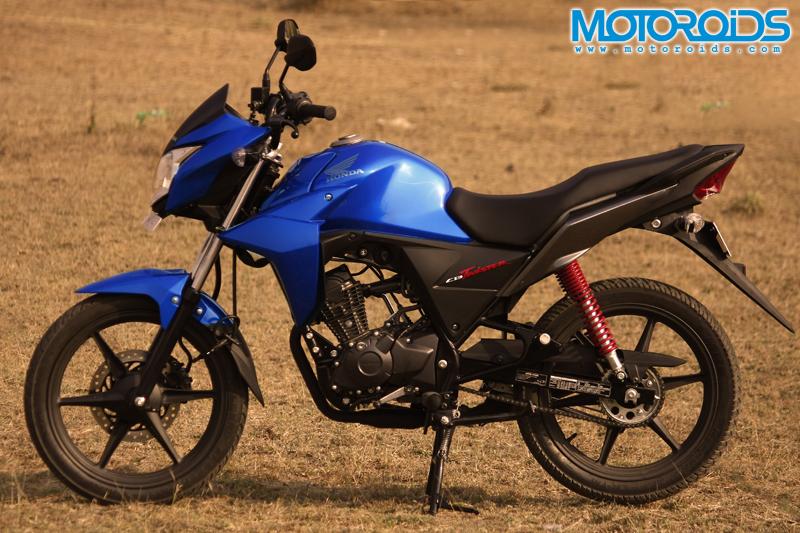 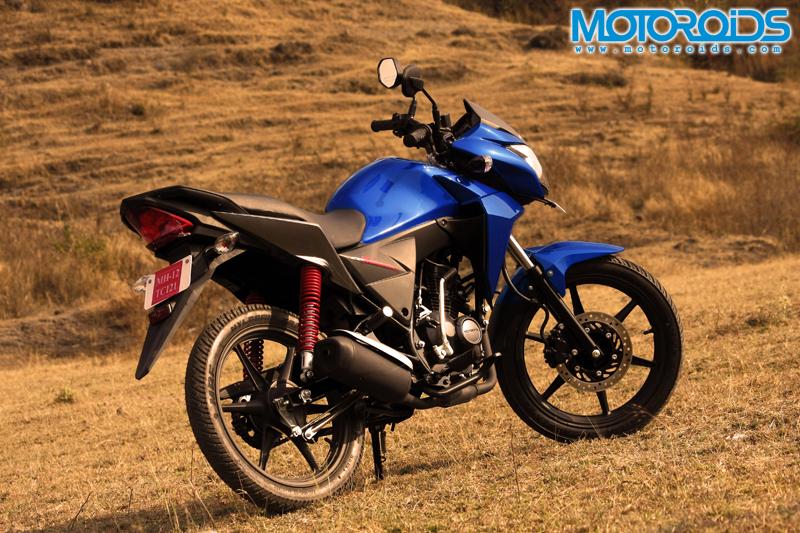 Overall, I have mixed reactions about this bike. I love its slick character and its fresh approach towards the 100cc segment. I love the way its dynamics stay true to the Honda character. The Twister feels so harmless that it’s one bike that sport-riding master, Keith Code, might as well choose if he decides to train adolescent kids on an Indian bike. Its 100cc engine won’t have a problem getting an instant nod from a teenager’s parents either. But where the Twister lacks are its little shortcomings which can partly be blamed on Indian OEM’s quality issues and partly on engineering restrictions that come into play while packaging too many things into one product. 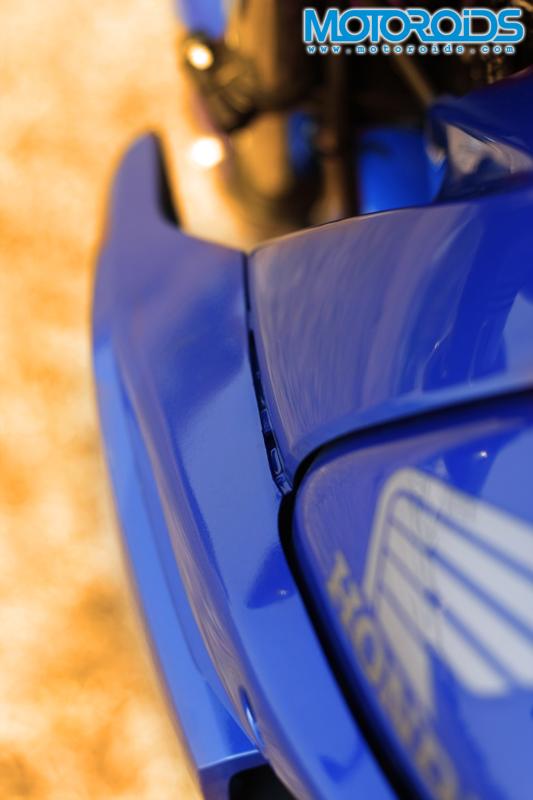 Panel gaps already! I doubt how long they are going to last on our Indian roads.

The quality issues are apparent with the gaps in the switch-gear, pathetic finish on some plastic parts like the mirrors, grab rail etc. The superb paint quality is marred by the thin plastic panels which are sure to fall apart in due time. Lightweight plastics work best on race bikes, not on Indian roads. The engineering restrictions are evident with the stiff rear suspension, which in the bid for better handling loses out on ride comfort. The forks on the other hand have such a soft damping on them that the registration plate keeps scraping the paint off the front fender every time you brake hard or go through a pothole. The short gearing gives the Twister some exciting low end torque but the mysterious absence of a centre groove on the rear tyre makes sure that the twist coming in from gearbox isn’t entirely put down on the road – leading to unnerving wheelspins when you least expect it. 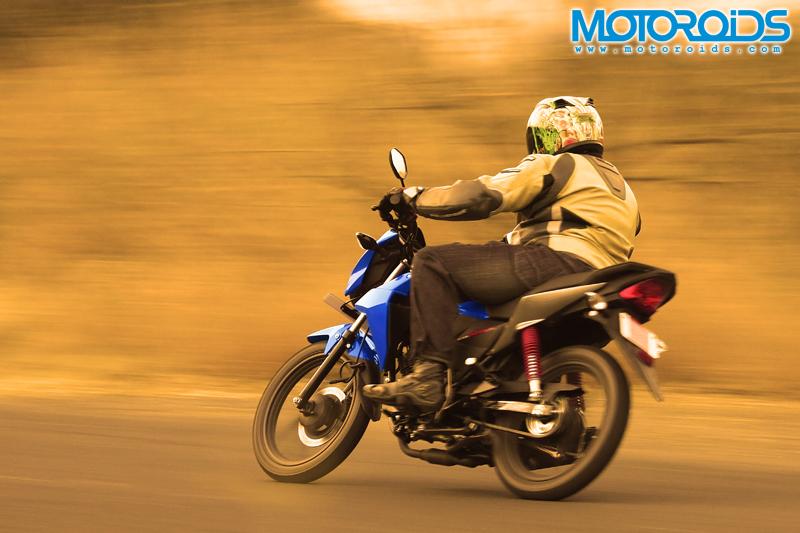 These knick-knacks make the otherwise pleasant experience, irritating at times. Nevertheless, the Twister will sell in humungous numbers, no doubt. It will probably even spawn a 100cc Pulsar in due time. But the shortcomings I listed will prevent me from putting down the fat amount that Honda expects from me. For now at least.