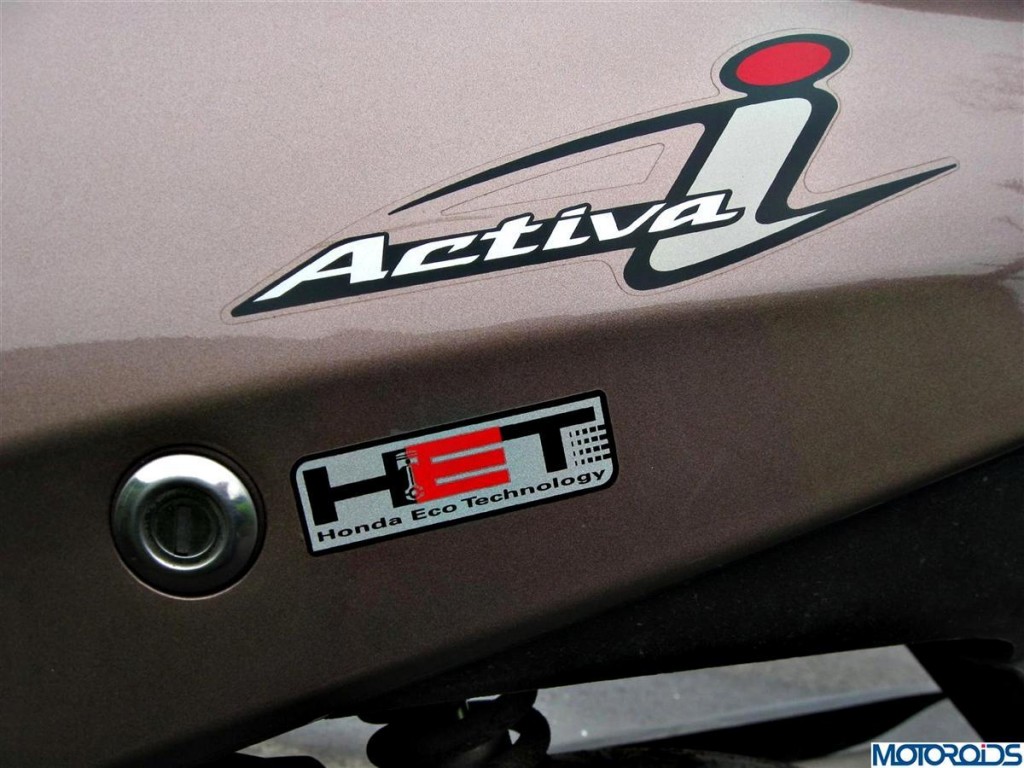 It’s been a decade since the Honda Activa announced its entry into the Indian automatic scooter market. Even today the trust in the Activa brand is such that people would simply walk into a Honda Dealership and book one- without considering any options whatsoever. The other offerings from Honda in the Dio and the Aviator, which despite sharing the same engine generally end up being overlooked. Buyers would still choose the Activa with waiting periods rivaling that of today’s popular cars. This rather appears as a loophole in the Activa sales as a few buyers would look at options from other manufacturers. In an effort to further cash on the Activa brand and pull back the parting customers, Honda launched a cheaper variant of its best selling scoot, baptized as the Activa-i HET. 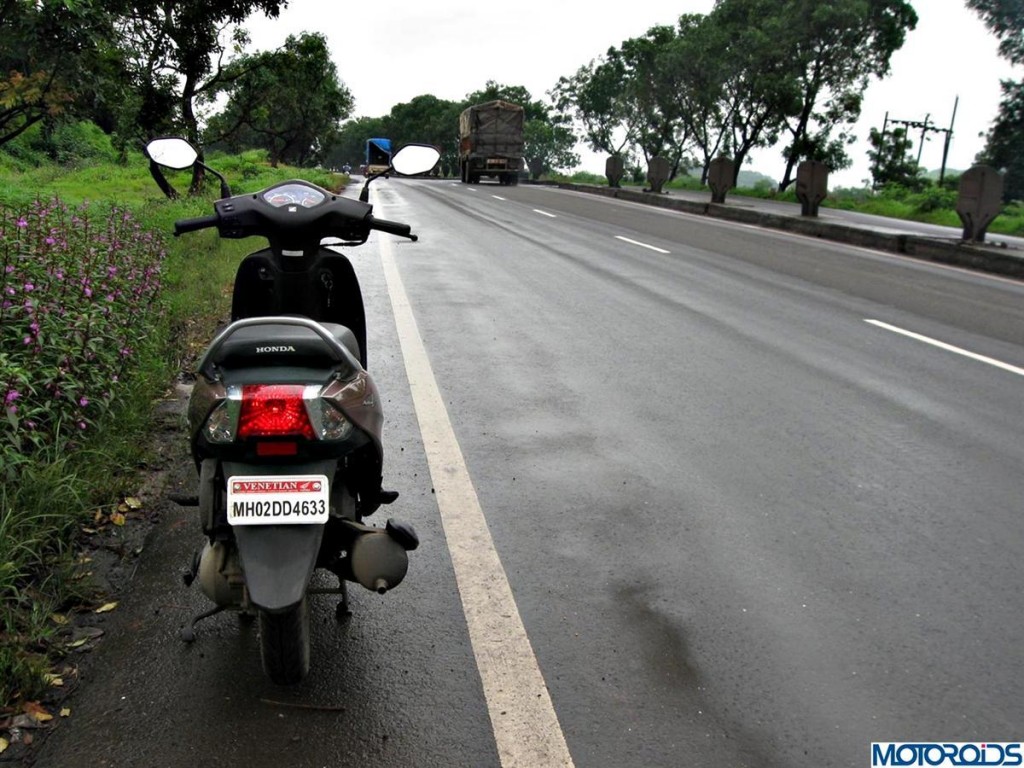 So how well does the new Activa-i when compared to its peer. We put the little scoot to a test of 250 kms that involved solo as well as two up trips, wading through the painstaking stop-and-go Mumbai traffic to prolonged cruising on the lovely Mumbai-Nasik Highway. And here we go with our observations and experience.

NEXT PAGE FOR STYLING, FEATURES & PERFORMANCE 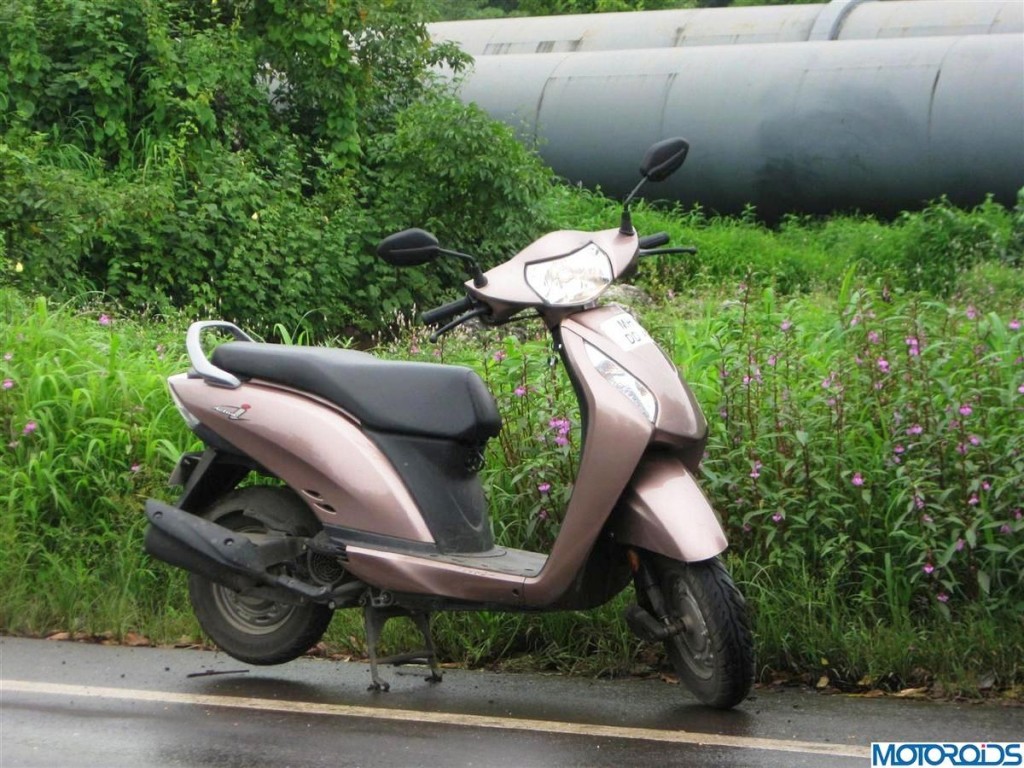 One glance at the new Activa-i and its easy to identify the autoscoot’s feminine inclination and despite sharing a similar moniker, it bears no design resemblance to its parent model. Though offered as a cheaper alternative, the Activa-i has been given a decent styling treatment and unlike square-ish proportions in the original Activa, retains a more curvaceous daft. The dashboard looks neat and modern showing no signs of quality compromise. The multi-reflector headlight, large front indicators with built in pilot lamps and a modern looking tail impart the Activa-i with a diverse personality. 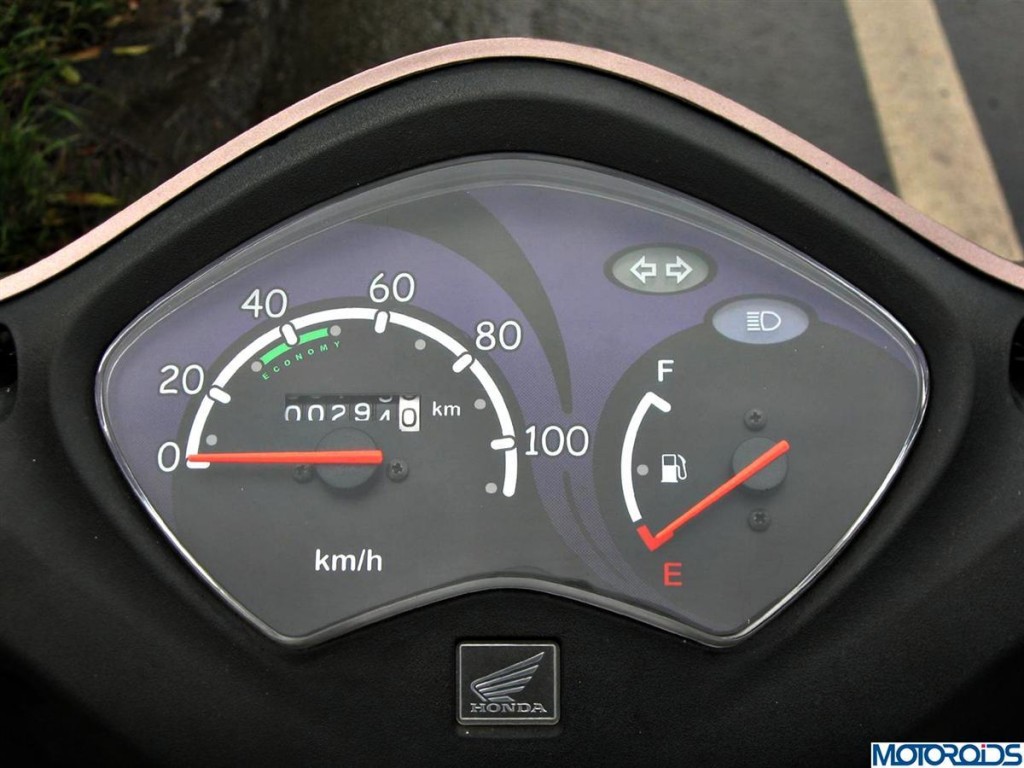 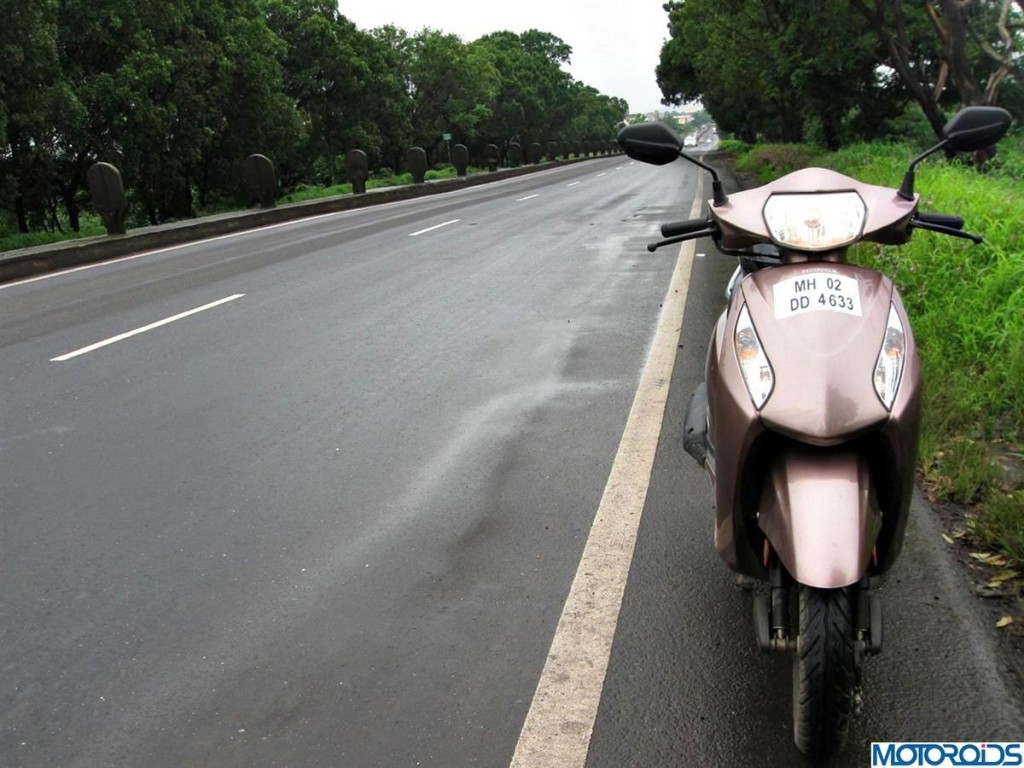 The switchgear and instrumentation as has been the norm across Honda Autoscoots, is ergonomic in operation and though the switches feel durable, they don’t seem as well finished as the other scoots in the lineup. 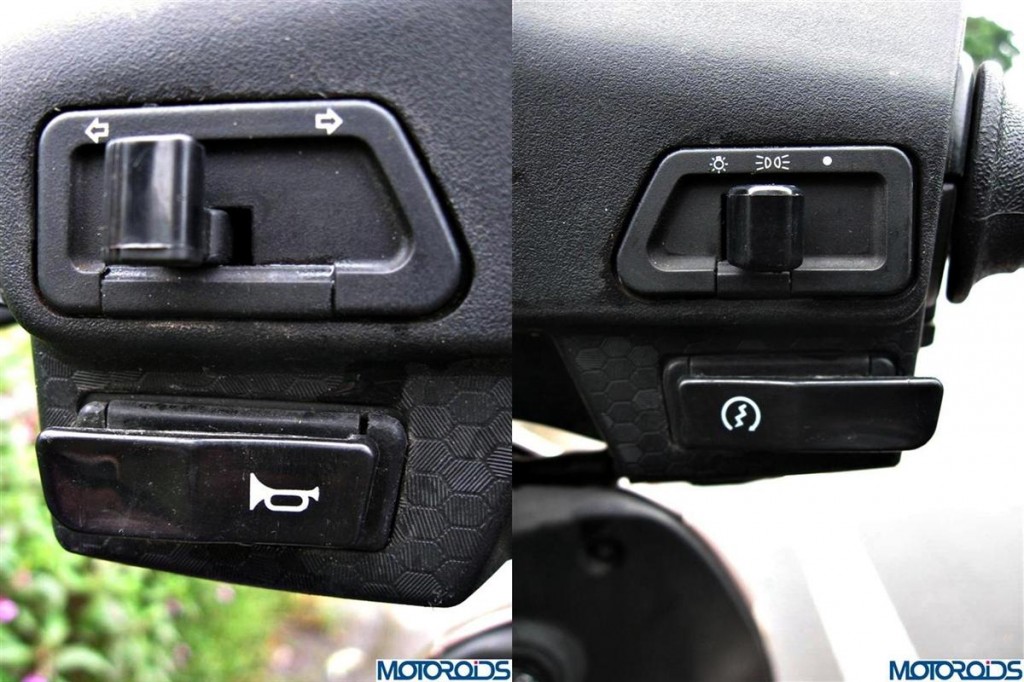 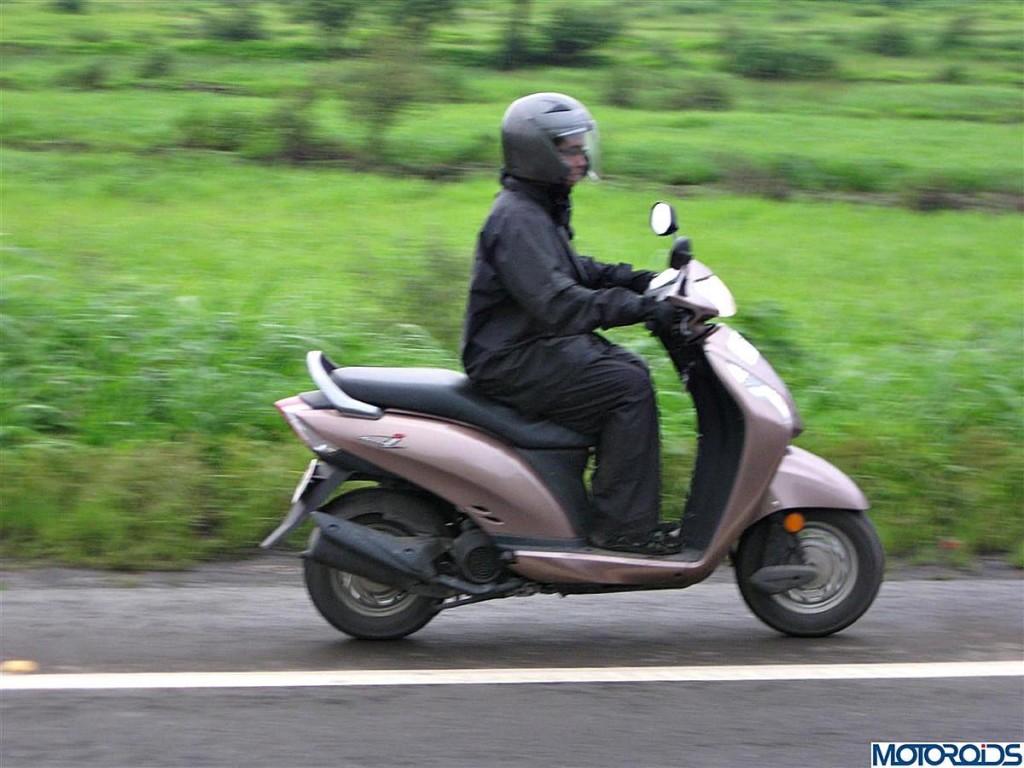 The footboard has enough space to accommodate a tall rider even while carrying a medium sized bag affixed to a spring hook. 18 litres of underseat storage provides enough lockable space for a medium size helmet and a boot for routine grocery purchases. 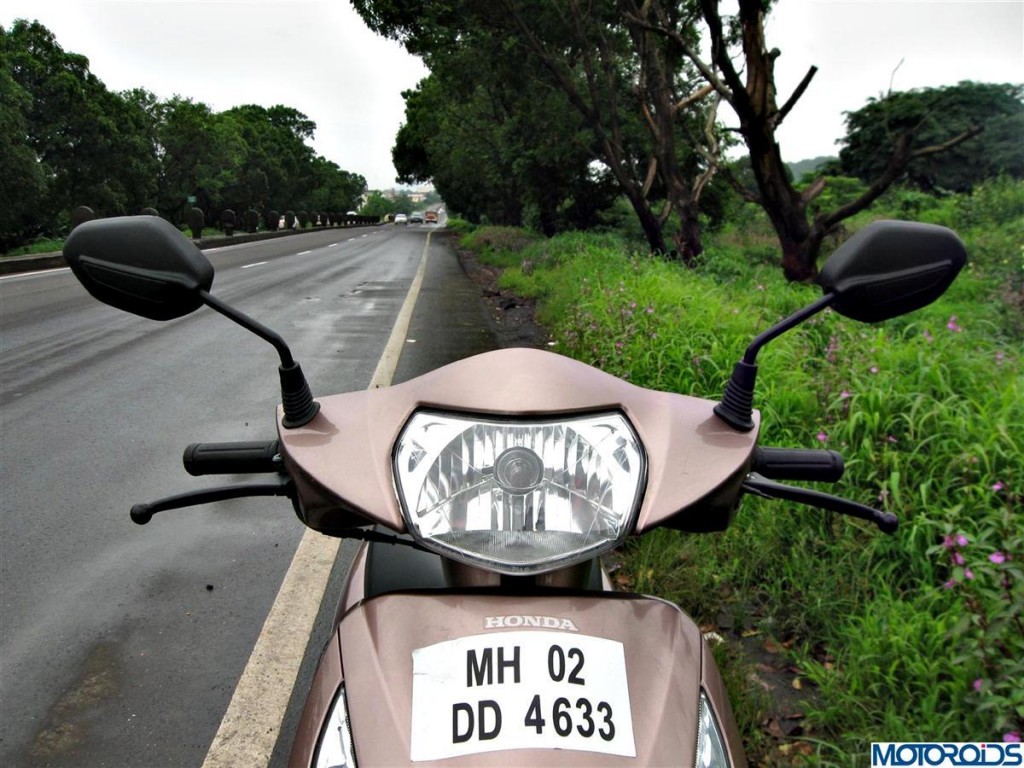 The headlight beam is average but acceptable for its segment and works best when ridden in low beam. The high beam except for marginal distance doesn’t offer the spread and intensity that the low beam offers. 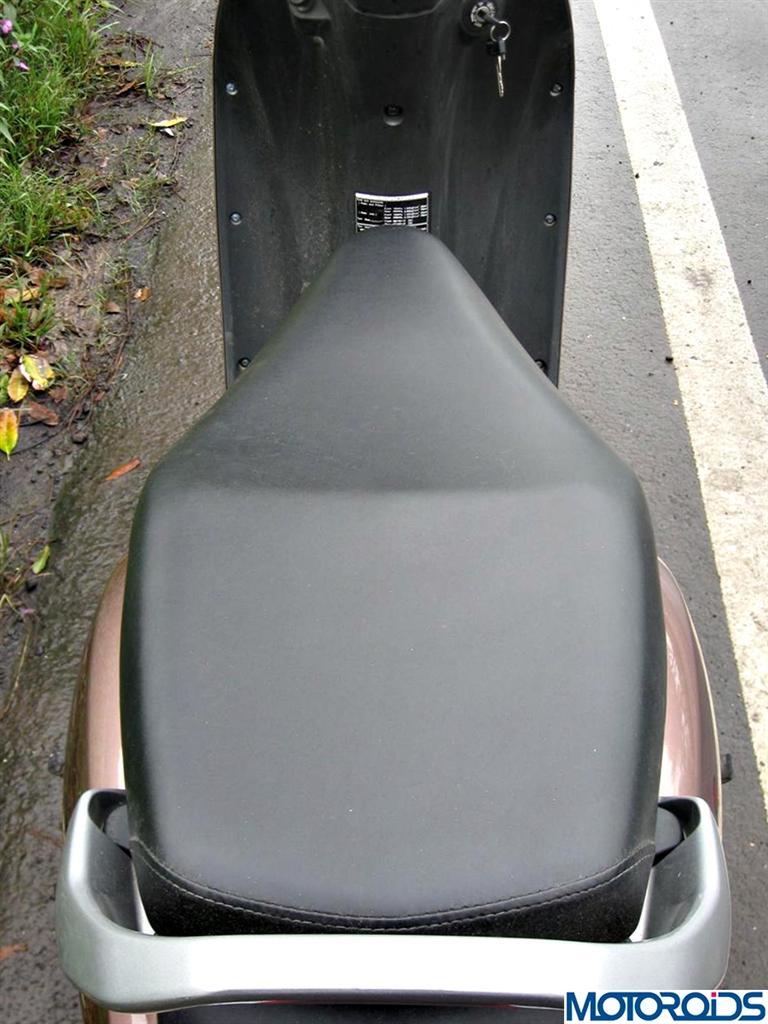 Talking of comfort, the seat has enough cushion and accommodates two up riding with relative ease and feels cozy as long as one is riding over well paved roads. Comfort goes for a toss as soon as the Activa-i hits a bad patch. Even minor undulations can be felt through the handlebars and though there are no squeaks form the body panels, the ride quality does take a beating. The front suspension seems overly stiff and the damping feels nearly non-existent. The rear too seems to be on the stiffer side, and though the cushy seat somewhat compensates for the rigid ride quality, it’s hard to avoid bouncing on the seat while goes over a bumpy tarmac. The addition of weight while riding two up reduces the jerkiness to some extent, but even the co-passenger was found complaining about the stiff ride. 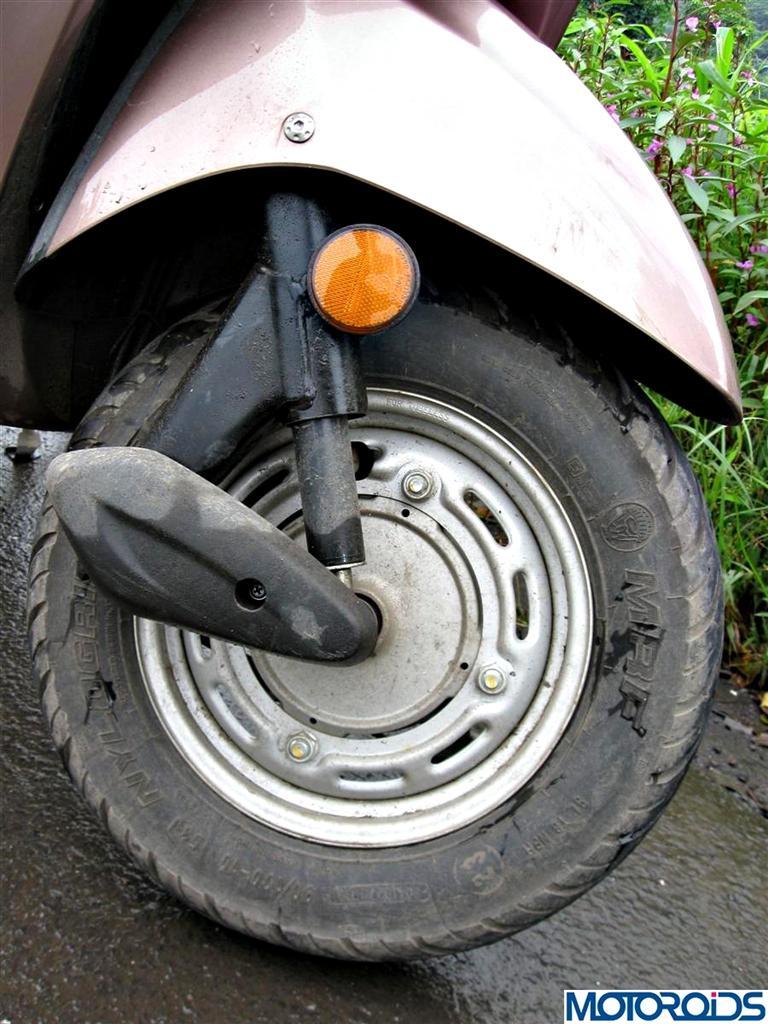 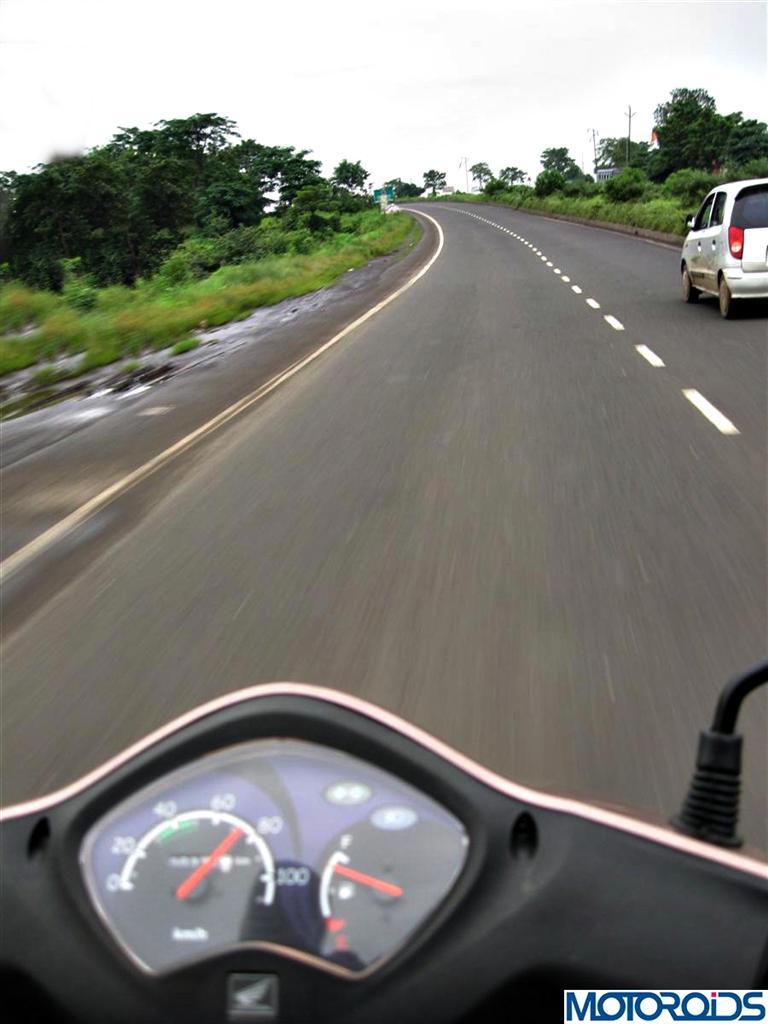 Coming to handling, the Activa-i is more than a handy tool in cutting through traffic with minimum effort. It does feel bottom light, but holds its desired line of travel during cornering. 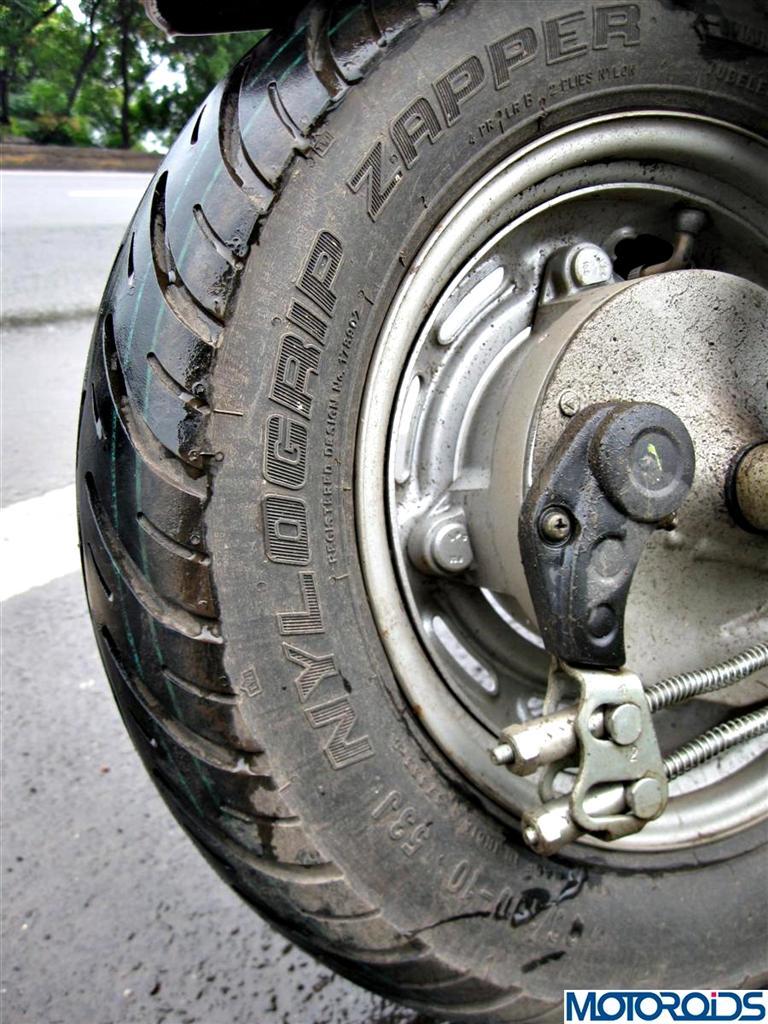 The tubeless MRF Zappers offer ample grip in both wet and dry conditions. When it comes to braking, the front brakes lack the required bite and ensure that the scoot stops like a train. Thankfully the combi-brakes are extremely effective in slowing down or bringing the Activa-i to a breezy stop without any drama.

NEXT PAGE FOR ENGINE 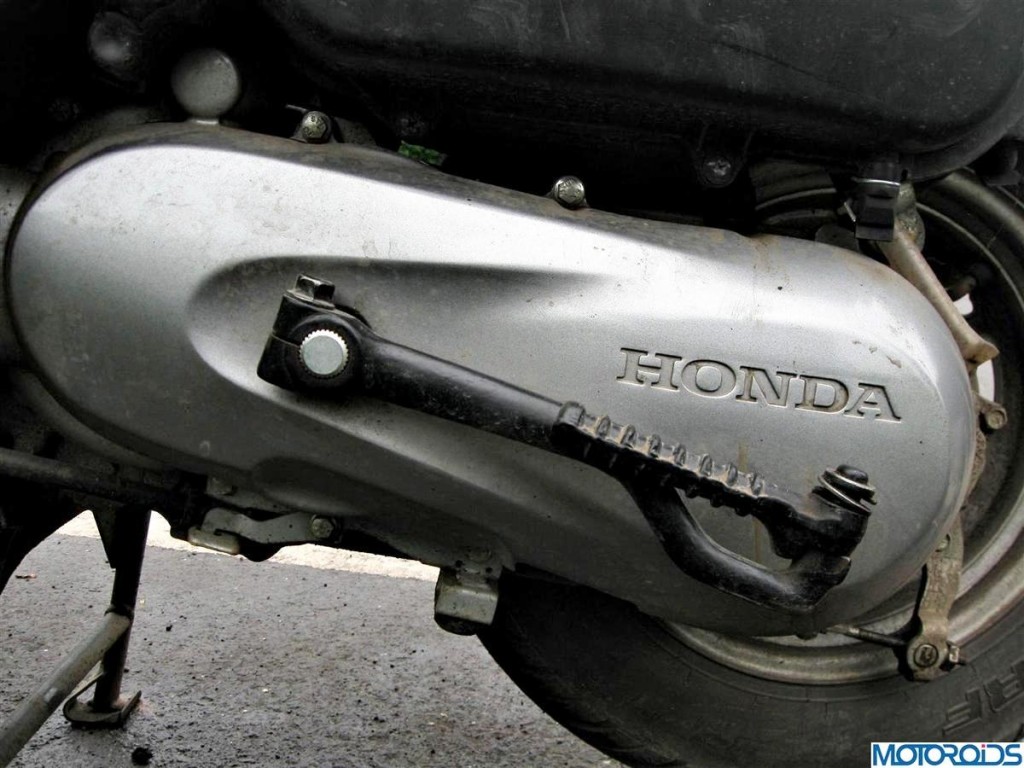 The Activa-i runs the same 109cc HET engine powering the trio of the Activa, Dio and the Aviator. The HET engine features an offset crank for efficient slide of the piston, a low tension piston ring, lighter cycle parts and improved bearing oil seals. A highly ignitable nickel spark plug replaces the regular spark plug for better combustion of fuel fed in through an optimized induction port. The pulley converter too has been tweaked for better power delivery. 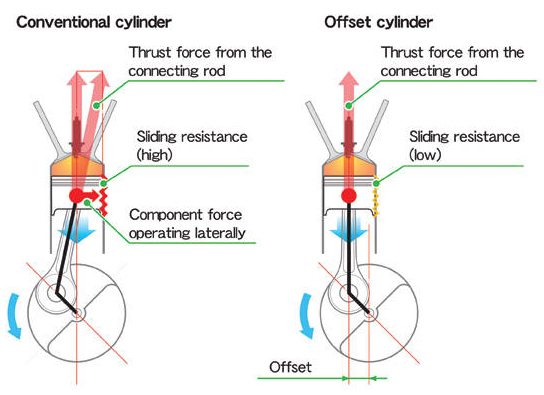 The engine feels peppy and retains the trademark Honda smoothness, but till the 70 kph mark- post which the Activa-i starts feeling gruff. It was surprising to note the difference in refinement when compared to the regular Activa despite sharing the same engine. On one hand where the Activa would maintain composure even while going north of 80 kph, the Activa-i starts complaining at a full 10 kph less. Top speed recorded on the run was 85 kph, but one wouldn’t really like to keep the Activa-i running at those speeds for the above cited reason. 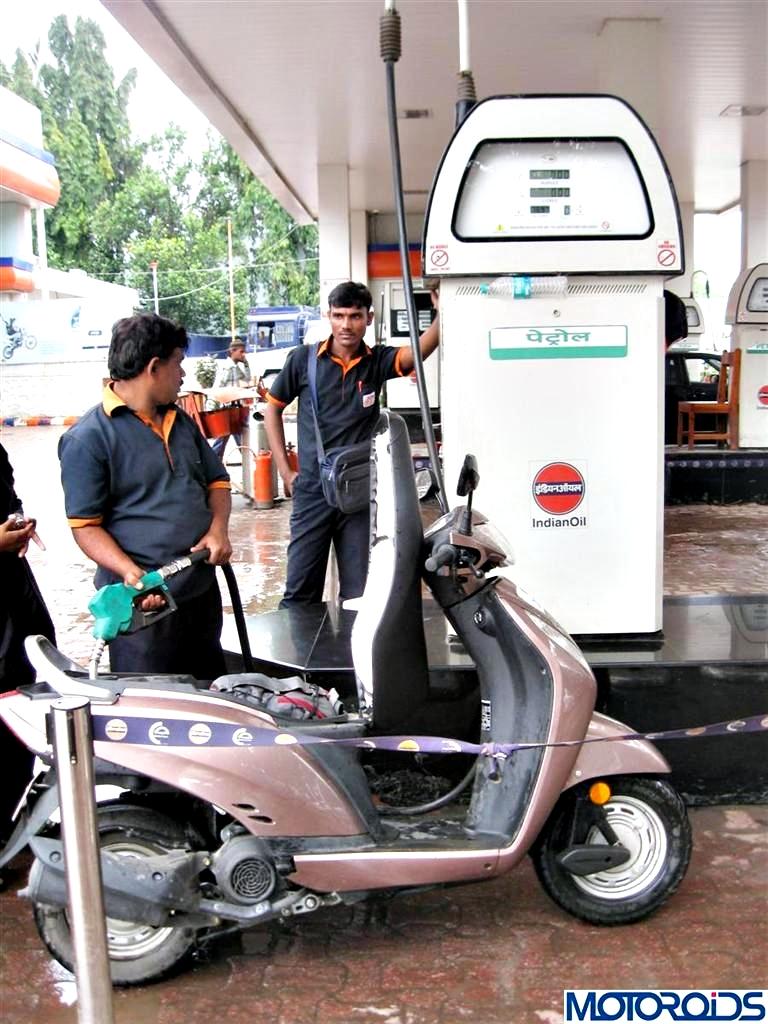 Coming to the most important aspect- mileage. Subjected to a run of 250 kms comprising of slow moving city traffic to extended highway runs, the Activa-i returned figures of 47 kpl (approx). Though this might come as a surprise when compared to our review of the Activa HET, where it returned a close to claimed 55 kpl- the Activa-i was ridden two up most of the time and put to prolonged high speed cruising on the Mumbai-Nasik Highway. We expect the figures to improve with a more restraint style of riding and get close to Honda’s dream mileage claim of 60 kpl.

NEXT PAGE FOR CONCLUSION & TECH SPECS 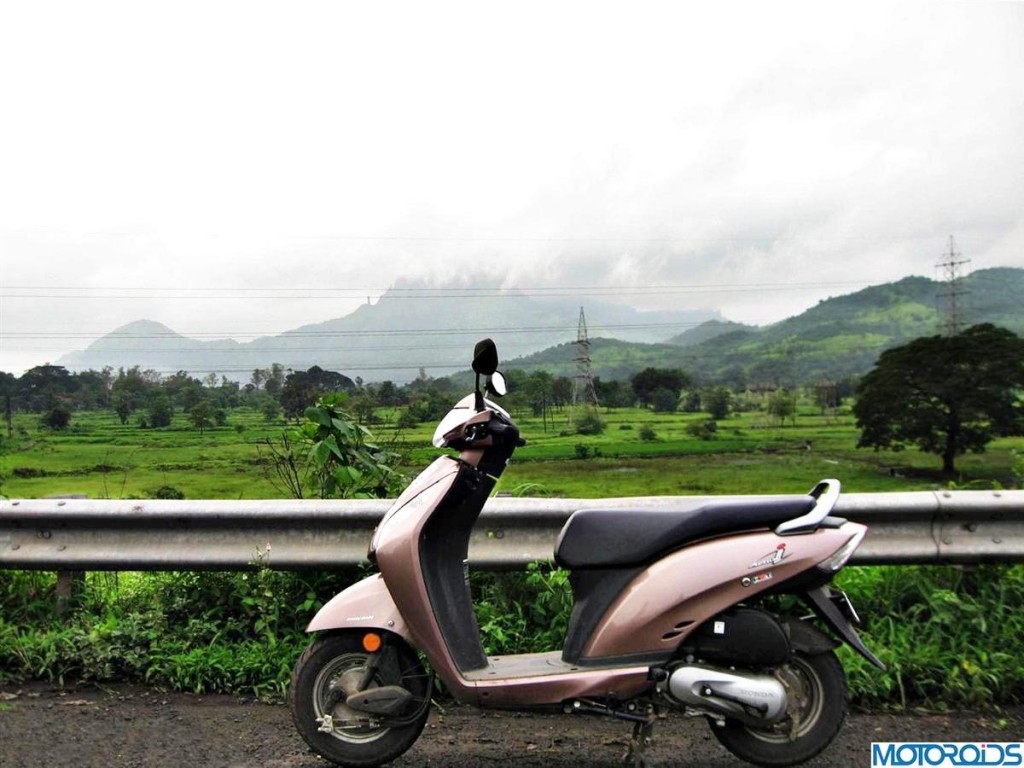 The Activa-i primarily aims to attract the feminine segment in need of an effortless scoot for the routine commuting drudge. It does feel comparatively easier to handle than the regular Activa, which still continues to command a long waiting period- which his no less than a turn off with customers flocking to the competition. The new Honda Activa-i looks to redress both these issues at a lesser price.