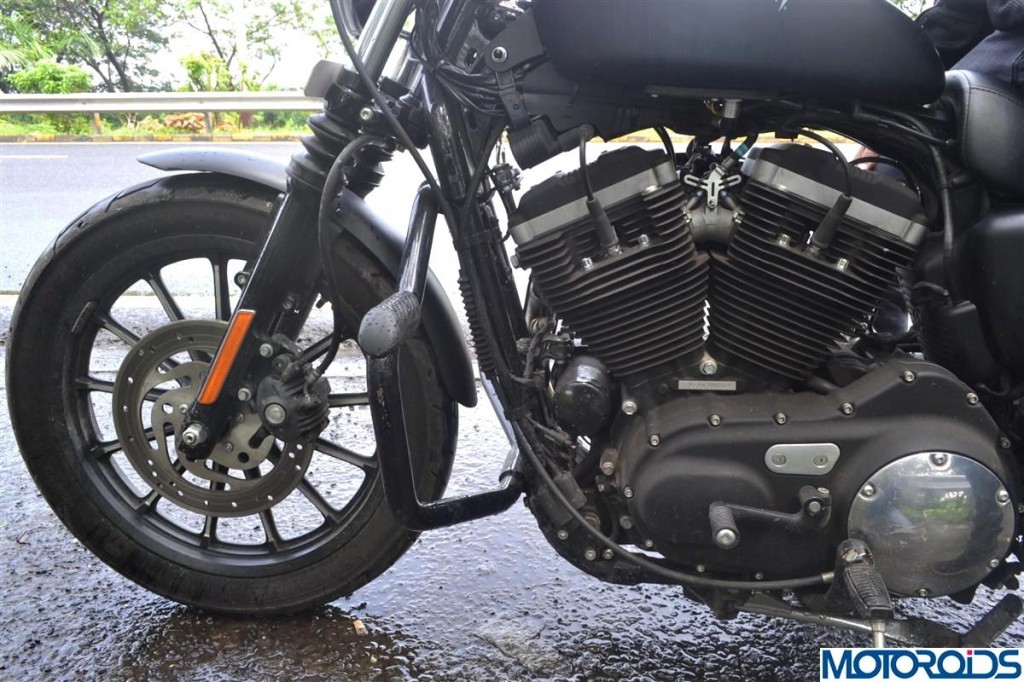 This ride was something that obliterated my perception about Harleys. Well, most part of it. Even before I hopped onto the motorcycle, the not so pleasant sight of the quivering, archaic 45 degree Evolution V-Twin nicknamed the “Blockhead” was enough to cement my opinion of Harleys being heavy and unrefined contraptions. But even with all its coarseness it appeared as though the Stealthy Sportster from Milwaukee had a strong case to defend itself going further. And how successful was it to scrub off my skepticism – you’ll get to read all about it in the performance part of the writeup.

Truth be told, the sheer thought overpowering my pre-conceived negativity about this rather old school bit of machinery was the sheer attitude that radiated off it. Being the optimist that I am, I decided to feast my eyes on the Dark Knight. 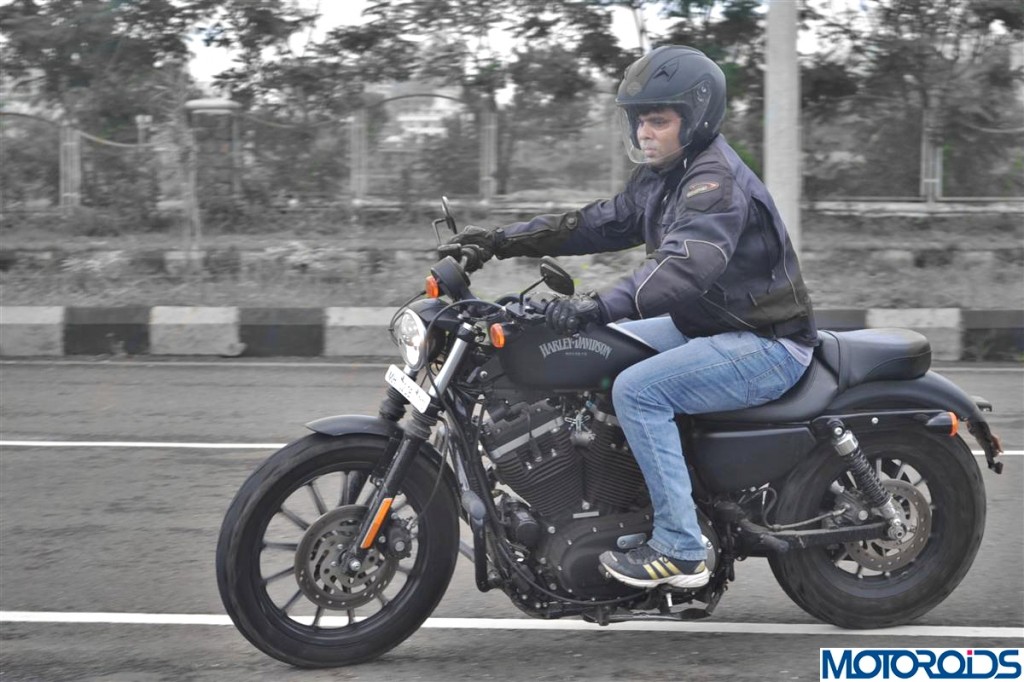 If motorcycles had attitude, the Iron 883 would profusely reek of darkness. The sinister looking 883 reveals its penchant for black and at the same time, a dislike for chrome. It’s not the usual cruiser motorcycle which loves to flaunt its chrome and shiny bits under the sun. Except for the larger part of chrome on the dual straight-cut muffler exhaust and the front fork tubes, the anti-chrome Iron 883 loves barring its dark side. The powder coated crankcase, cylinders, front fork sliders, side panels, the 13 spoke cast-aluminum alloy wheels; in fact even the low-rise drag styled handlebar and the headlamp bucket are finished in black. The design might look old school and still bear resemblance to the sportsters of the late 50s, but the murky 883 with its restrained use of chrome at the right places delivers a relatively modern look when compared to most other motorcycles from the Harley stable. 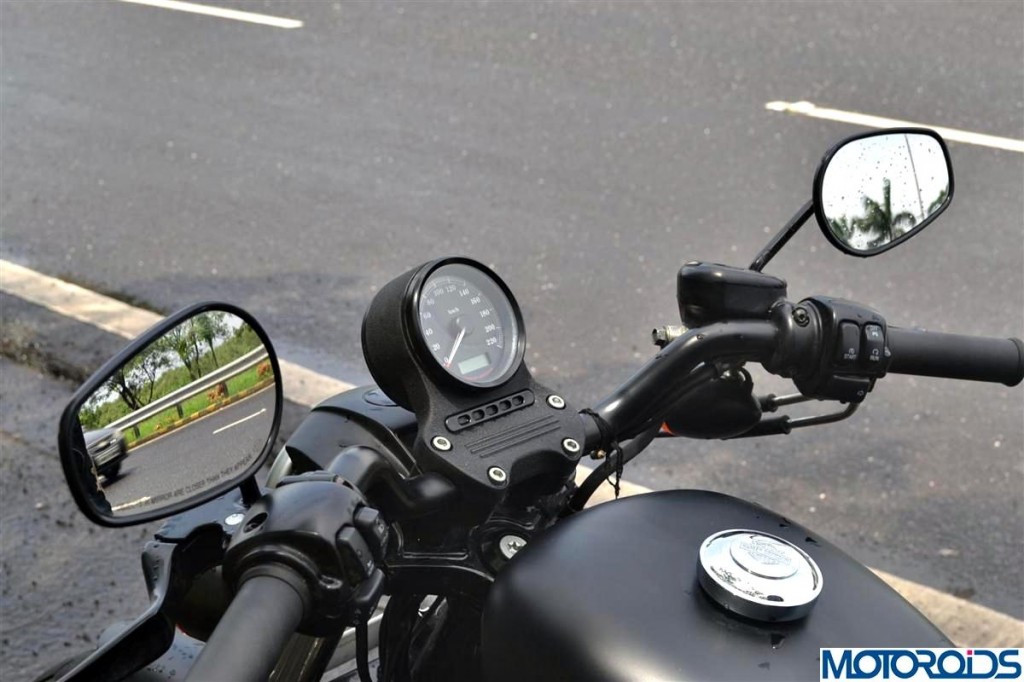 The Harley Davidson Iron 883, overall, is a well finished motorcycle. The matt black coat right from its peanut shaped 12.5 litre fuel tank to the rear fender is consistent and it’s hard to find any rough edges on the bike. The integrated stop-turn-tail lights while eliminating the need of an extra stop light, adds a minimal but classy touch to the 883. The difficult to recognize oil cap located on the right side panel reduces the effort to replace the engine oil. The press and rotate mechanism might make the motorcycle look vulnerable to mischief, but the method itself would be a suspense to many. 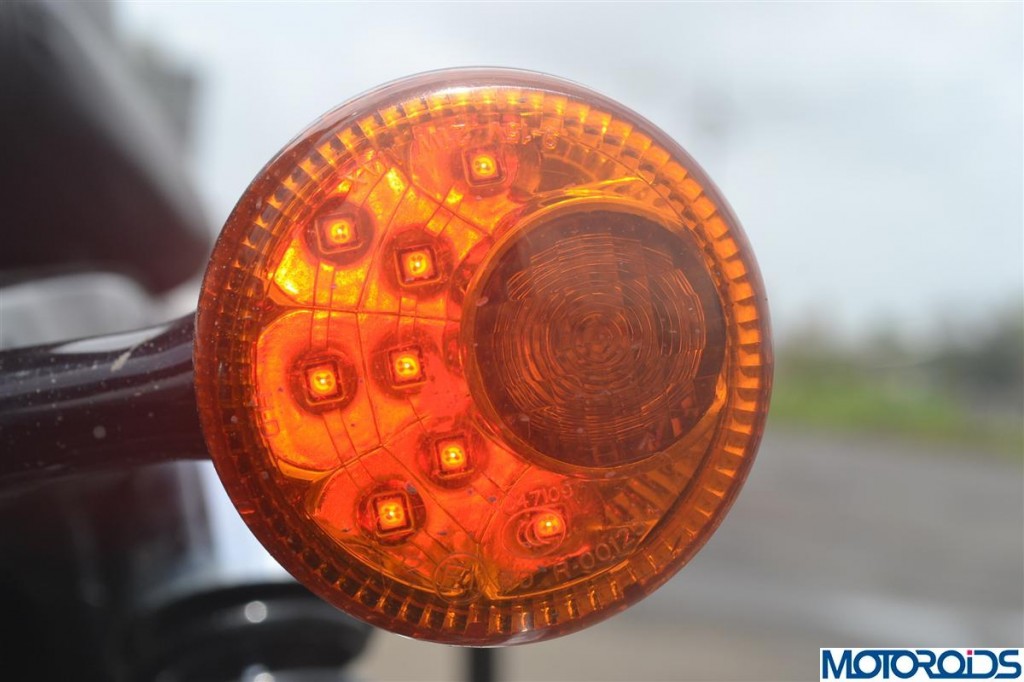 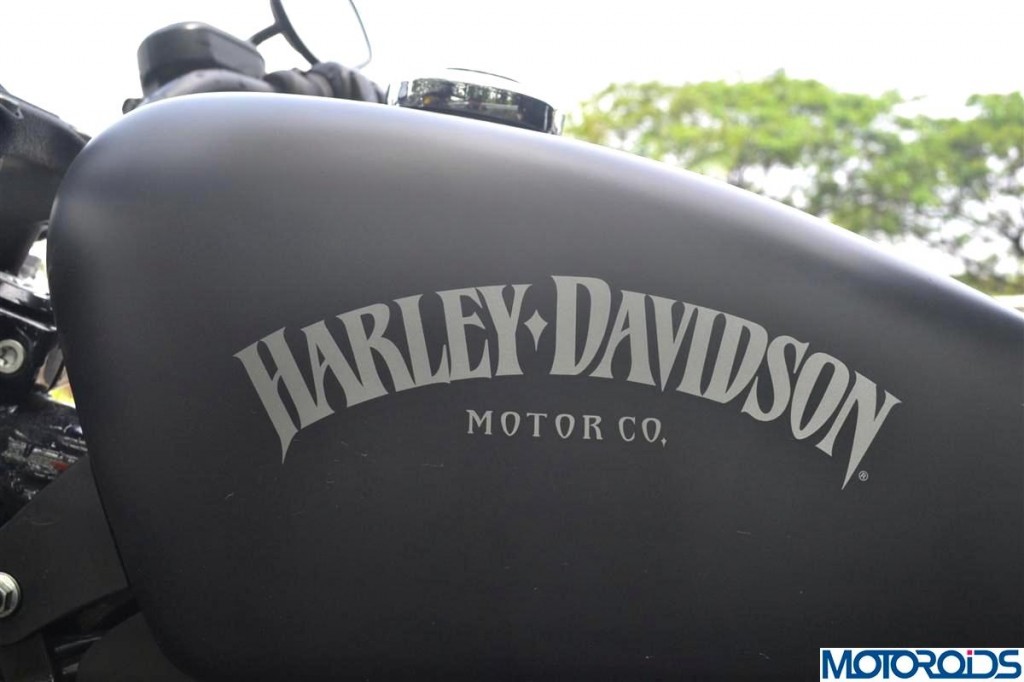 The Harley Davidson branding can be found all over the motorcycle, maybe to a much larger extent than on most other marquees. From the crank case to brake calipers, you would find the emblem on rubber cushions on the footrests, crashguard and the refueller cap. In fact even the anti-glare cap on the headlight halogen is embossed with the HD badge. If that wasn’t all, the Iron 883 comes shod with 100/90-19 inch front and 150/80-16 inch rear “Michelin Scorcher 31” tyres specially made for Harley Davidson motorcycles. But if one has to really point a negative finger, it has to be the swingarm. A beefier unit would have looked apt for the motorcycle of this size. In the present dimensions it looks rather underwhelming. The welded joints look crude and even the finishing seems a hurried job certainly not acceptable from a motorcycle that almost costs as much as a sedan in this part of the world. 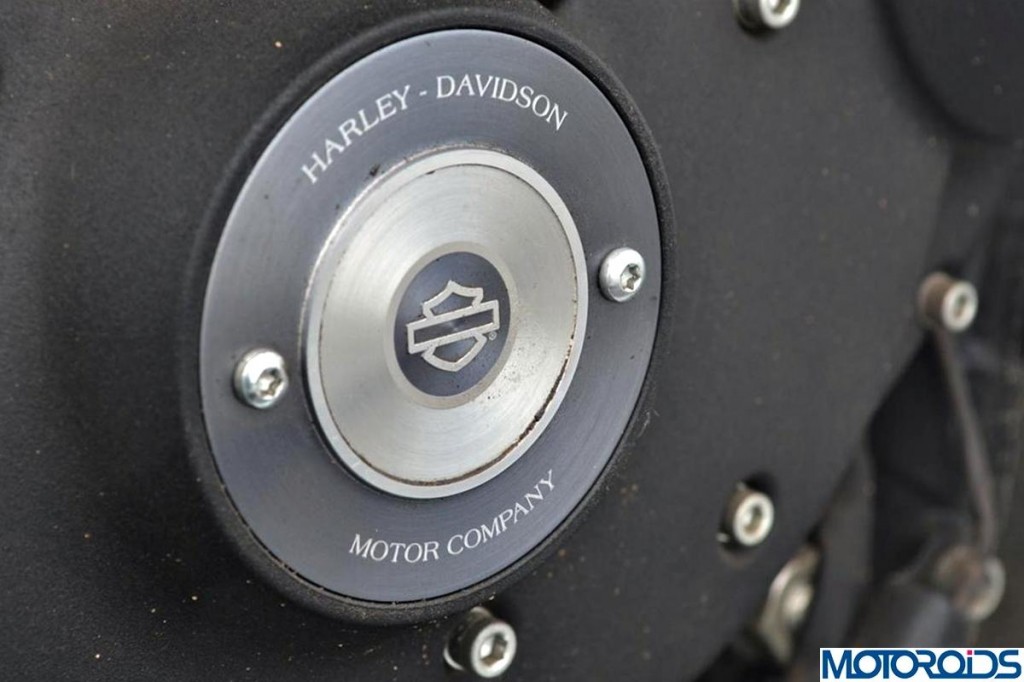 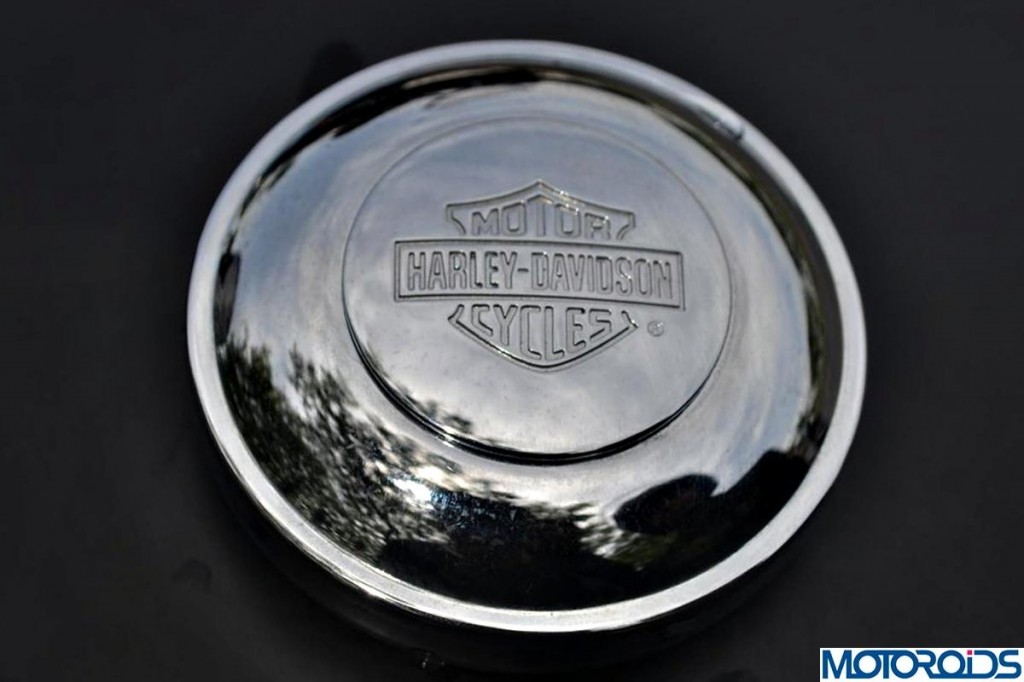 The Harley Davidson Iron 883 is powered by an air-cooled (sigh!) 45 degree v-twin rubber mounted evolution series engine. Producing a max power of 50 bhp @ 5800 rpm and 69 nm of peak torque @ 3500 rpm, the Iron 883 despite its long 96.8 mm power stroke demonstrates its sense of urgency right from the word go. There is a pronounced clunk while shifting from neutral to first, but a smooth operator across other cogs. Riding below 40 kph in first gear would need generous use of the clutch, but the moment you twist the throttle- the 883 delights you with its acceleration – sending all those horses via the belt drive to the rear wheel. 0-80 kph comes up in a dash in the first gear before the sudden jerk of the Electronic Sequential Port Fuel Injection (ESPFI) cuts off supply making you shift to second and taking you all the way to an indicated 140 kph. Thereon I was easy on the 5 speed gearbox accelerating gradually, hitting 170 kph before running out of straight road. This is exactly where my ill-conceived notions about Harleys were shattered. Though the rumbling at idle might put you off, but once it starts accelerating- it feels like a completely different motorcycle. It’s only while getting close to the rev-limit that the 883 starts showing signs of resistance which I feel is acceptable for a v-twin engine of its size. The 883 trounced my perception about Harleys and the defeat, in all honesty, was no less than a pleasurely feeling. 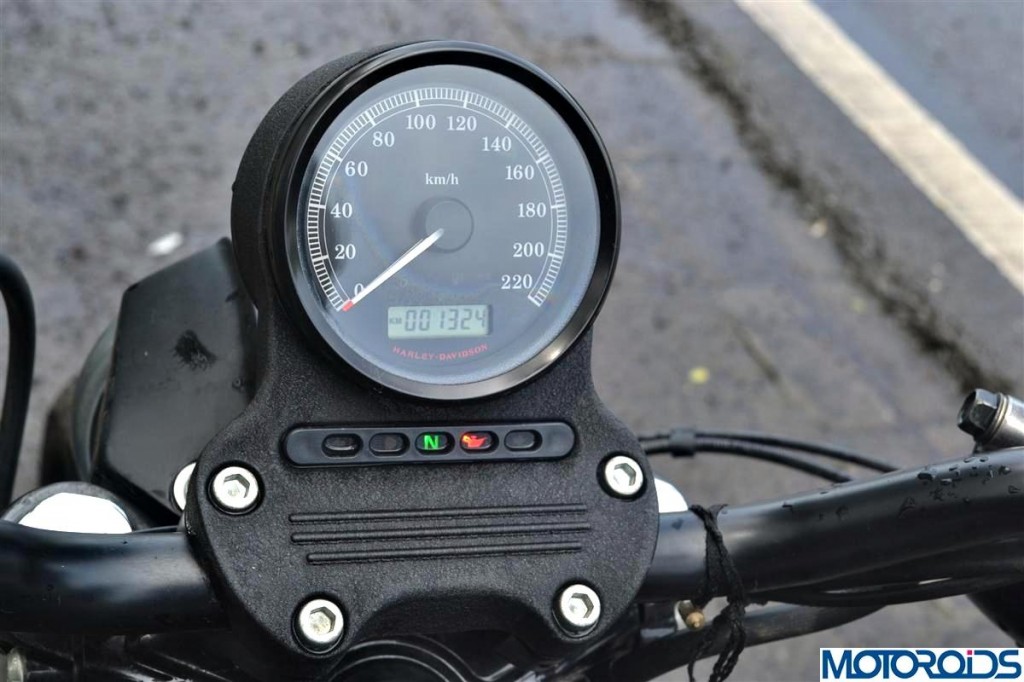 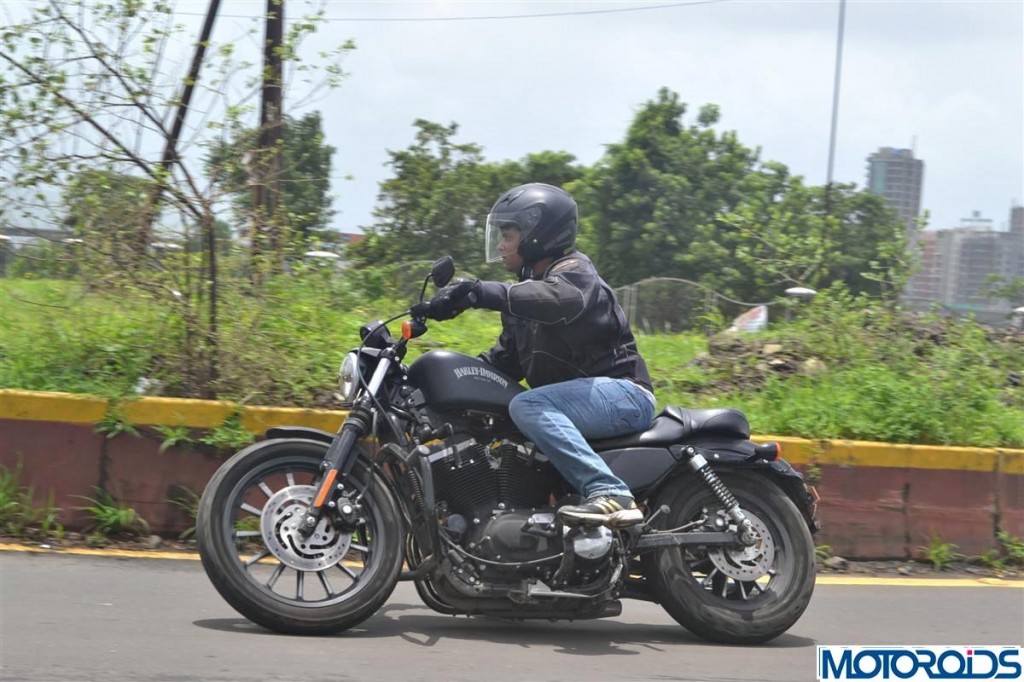 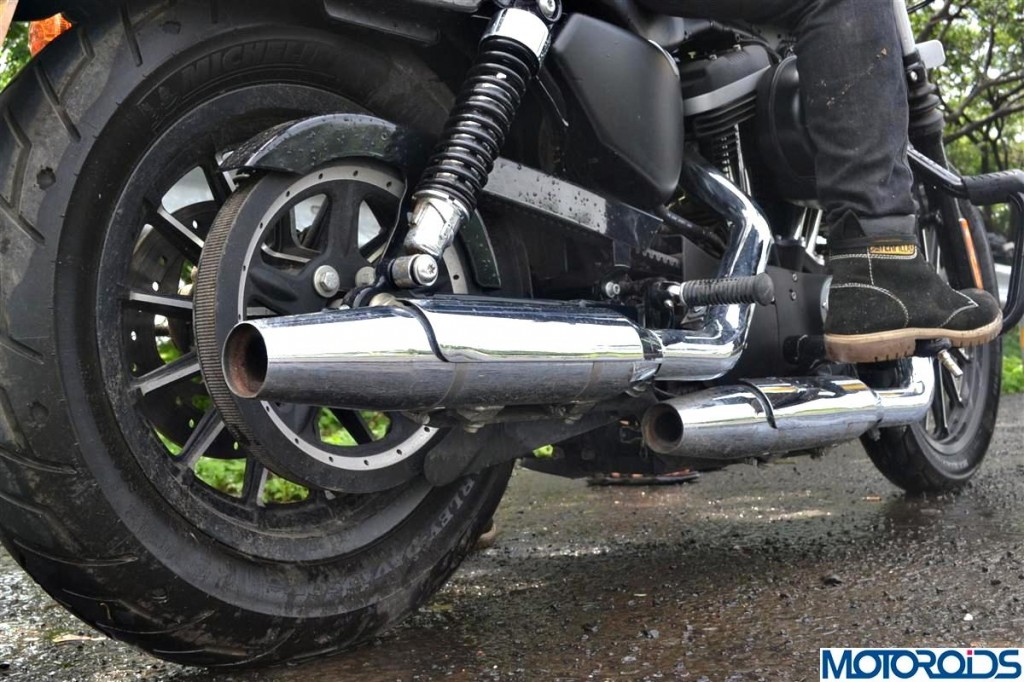 With a dry weight of 251 kgs, the Harley Davidson Iron 883 is by no means a light motorcycle. Swing your leg over, thumb the starter, get moving and it sheds its weight in a hurry with the 1510 mm wheelbase rendering terrific straight line stability. The 883 feels like the Rock of Gibraltar- no matter where the needle is pointing on the speedo. But when it comes to cornering, the 120 mm ground clearance won’t inspire you to lean much specially on the right side with the front exhaust eagerly trying to kiss the tarmac. The Iron 883 is a relatively easy going motorcycle into corners until you try to surpass the factory quoted lean angles (from perpendicular) of 30 degrees (left) and 29 degrees (right). The “Michelin Scorcher 31” tyres provide generous tarmac bite during cornering and high speed braking. 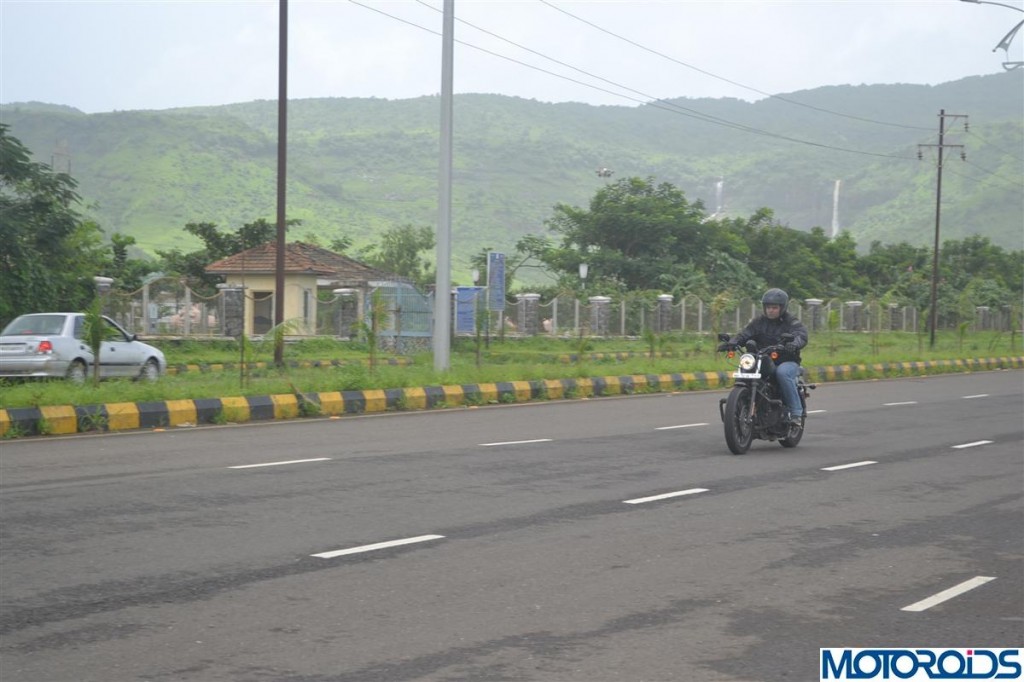 With a 292mm twin pot caliper single disc at the front and a 260mm single pot single disc at the rear, the Iron 883 offers decent braking performance and makes no drama when slowing down or coming to a complete stop under routine conditions. Its only while attempting to slow down from higher speeds, you feel the need for a stronger bite. ABS would have been an extremely welcome addition on the 883 considering the punch it packs. 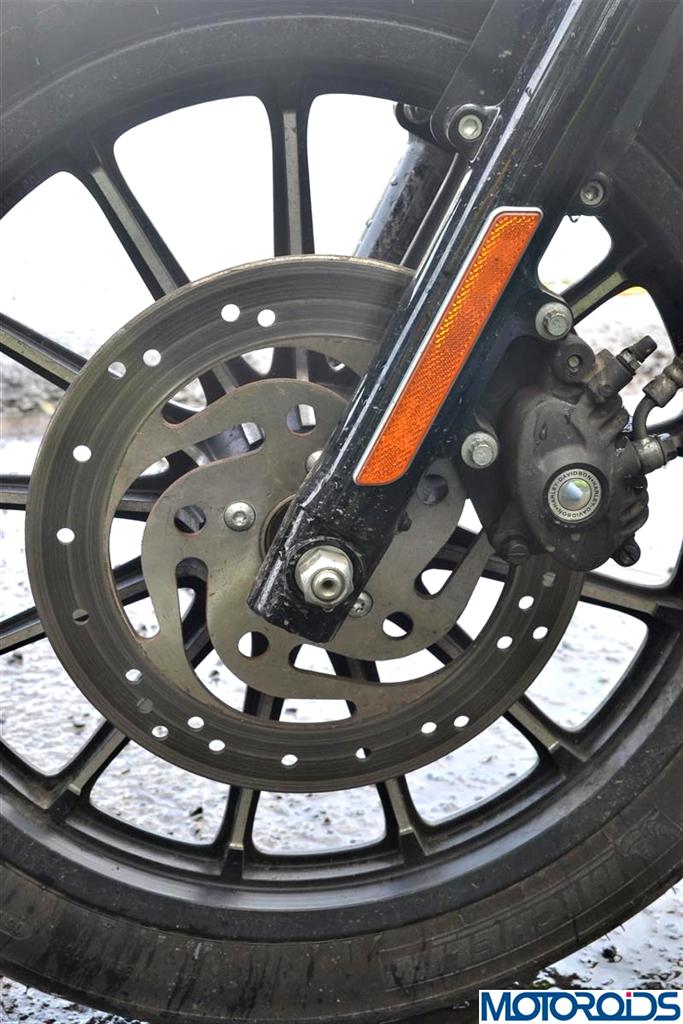 The Iron 883 sports 39mm telescopic fork up front with 92mm of travel and a measly 41mm travel on the twin shocks at the rear. Where on one hand the 883 is a breeze to ride on good stretches with its comfortable riding posture, it does throw a tantrum while going over rough patches. While the front suspension might still make light work of the rough Indian roads, the rear would send the undulations up your spine. While it might still be bearable for the rider negotiating broken stretches, it’s a certain nightmare for the pillion. No wonder the stock bike comes with a classic styled solo seat. The Iron 883 loves straight open stretches of good tarmac and that is exactly where it should be ridden. Any deviation and you have a shock treatment in the offing. 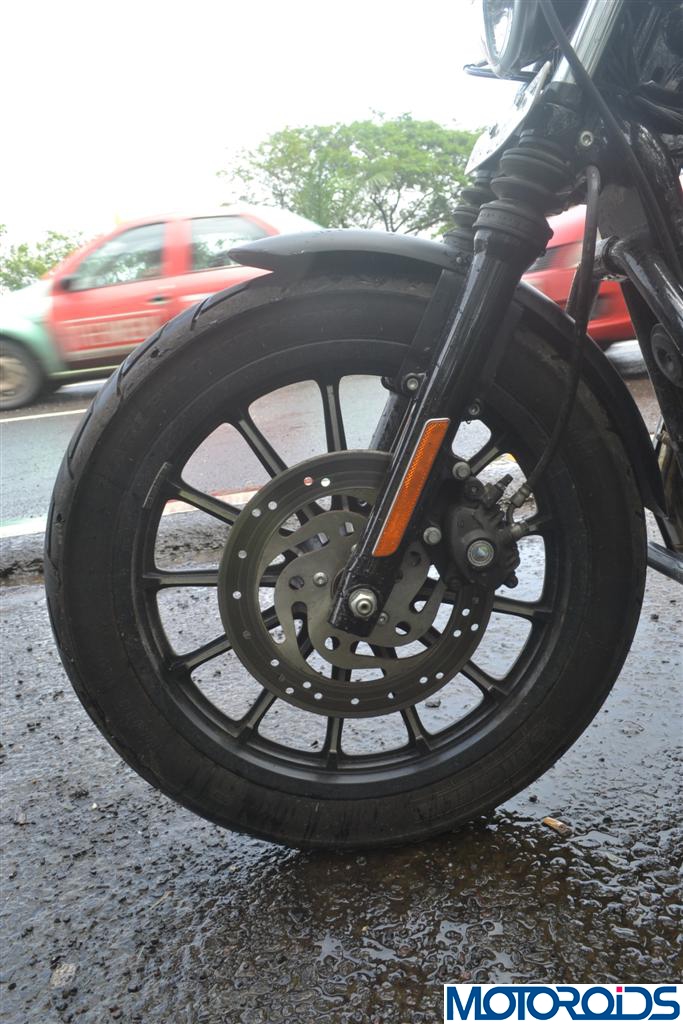 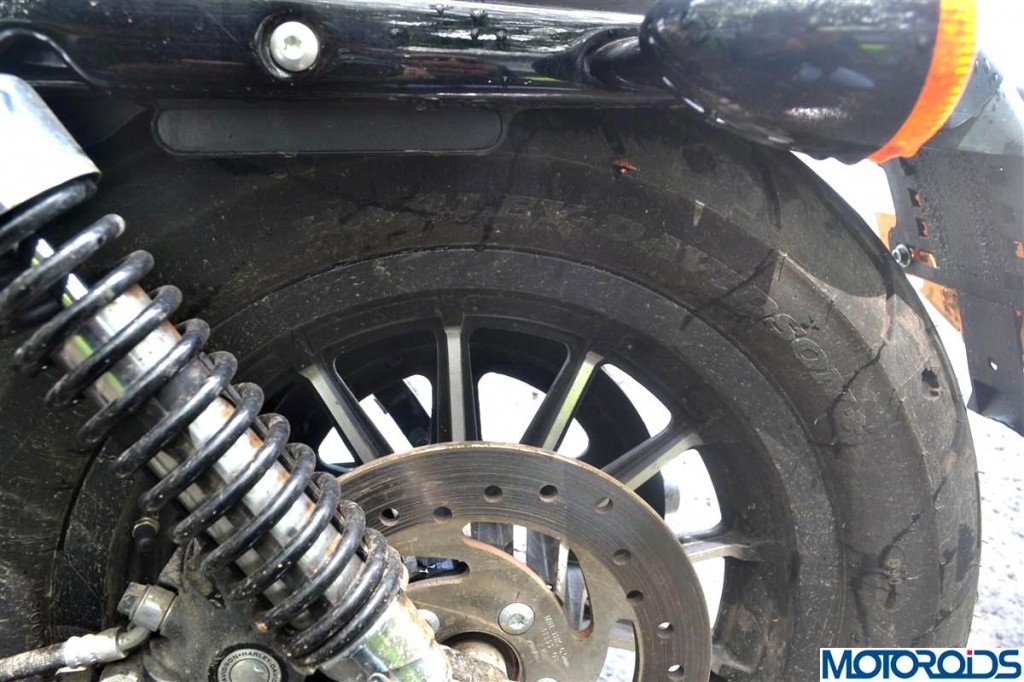 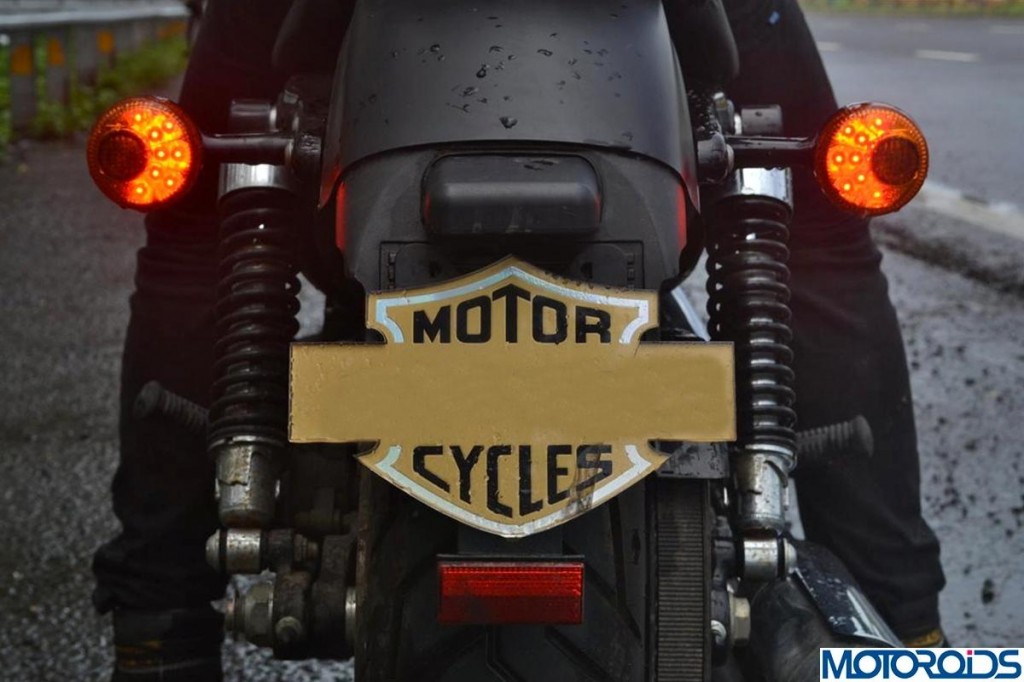 The Harley Davidson Iron 883 might not be a merit scoring candidate on the practicality chart- but Harleys have never been about practicality. It would be obvious for us here in India to compare it to, say, a Japanese motorcycle which would fare better overall and at a much lesser price- but for someone who plans to buy a Harley, the only alternative is, well, a Harley. The Iron 883 is for the style conscious rider who prefers the joy of thumping down the highway at a leisurely pace than on a hasty inline 4. This could be equated with the liking of old schoolers for the American muscle car over a revvy sports car. Also, in India, with prices starting at INR 6,71,000/- (ex-showroom, Delhi)- the Iron 883 is the second cheapest Harley Davidson you can buy. 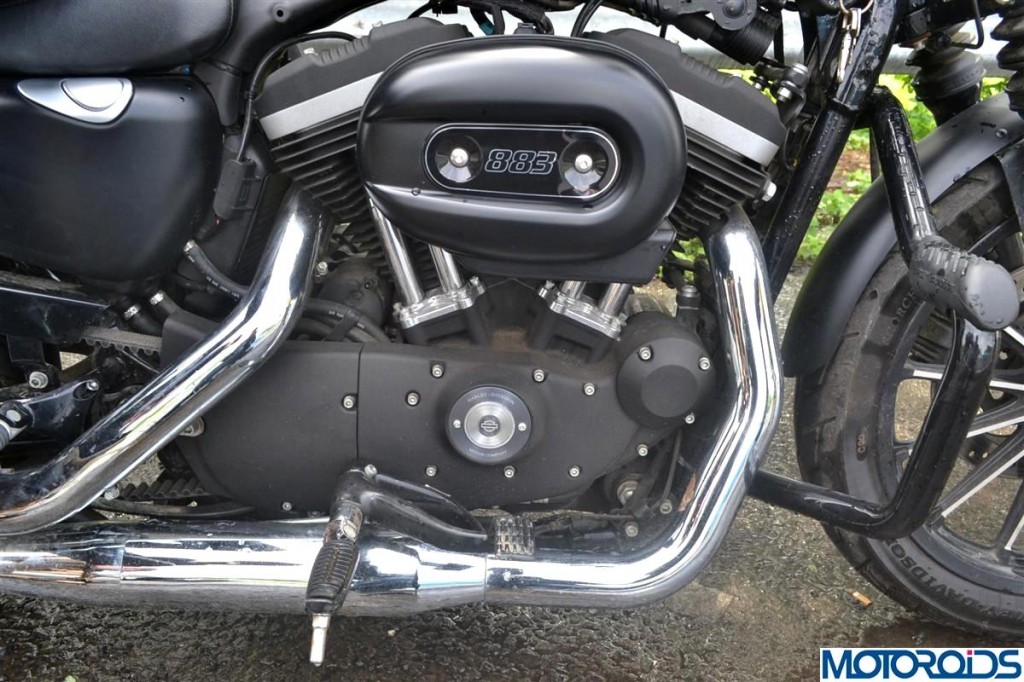 Even with its technological limitations, the sheer character, the attitude and the macho statement that a Harley-Davidson brings along, is quite unmatched by the litre class supersports. It has a charm of its own, to which, there honestly isn’t a substitute. It has ample performance on tap in its current form packs a fair degree of tech as well. With that badge on its tank, this H-D at the price we mentioned above is no less than a bargain. For those who subscribe to the languid, lazy, macho and style-oriented school of riding, the Iron 883 is most definitely a compelling option.

We would wish to thank:

Prasad Parkar for handing over his Iron 883 with extreme confidence for the review. We will also be publishing his own experiences with the Harley very soon.

Shardul Naik for all his shutter work.