Home Ford Ford Figo 40,000 km review: How well does it hold together? 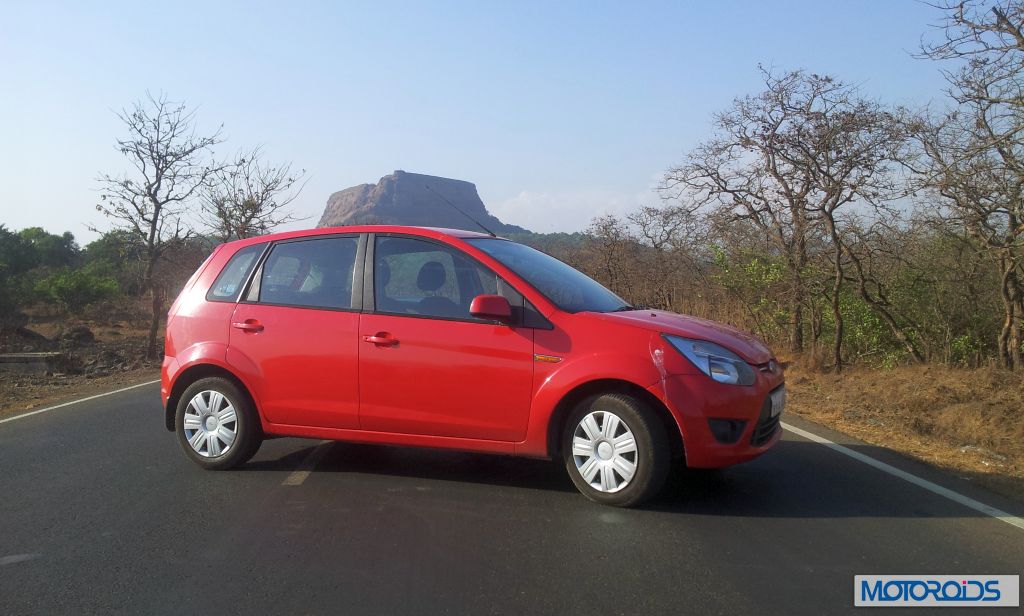 Enough has been said about the virtues of the Figo – the practical little car from Ford. It’s spacious, it’s well built, it’s punchy and efficient enough in the diesel guise and most of all, it doesn’t cost a bomb to own and maintain. The auto journalist fraternity has also acknowledged the qualities of the car by bestowing numerous awards on it.

Now, while a new car may function perfectly well for the initial few months, the issues with the machine start emerging only when it logs on a few thousand kilometers and the fine wrinkles start appearing on its pretty face. Most of the journalists have driven the car and have gone home impressed by this time, so you don’t quite get the picture on what living with the contraption in the long term is like. We have been wanting to drive a thoroughly used Figo for a long time now, and we got our opportunity recently when we called for a 1.4 TDCi diesel Titanium variant of the car for a review. The car had clocked more than 39,000 km, and it was just the perfect machine for us to pen this long overdue report. 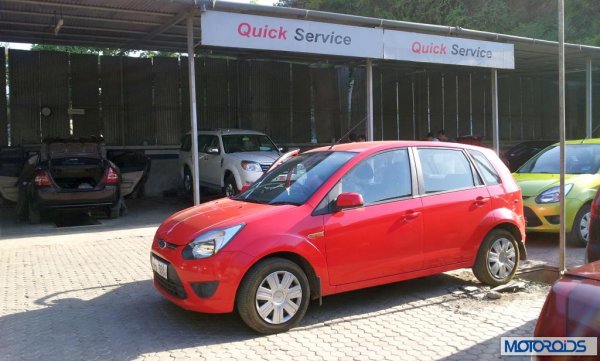 I took a walk around the car to see if there were any signs of wear on the outside. The only problem I see is a rear wiper which doesn’t quite seem to be in its right place. Sure, the paint wasn’t as glossy and bright as it would probably be on a new car, but I didn’t quite witness any worrisome discoloration or scars. As I stepped inside the car made me recall how the relatively high seating position of this baby makes the ingress and egress much more convenient than most of its counterparts. The materials inside, especially on the dashboard are hard wearing, and seem have held together well. No signs of any discoloration, no wearing off of the aluminium finish from the AC vent rings or door handles, and no falling off of the bezel rings. Everything has been put together well, and has braved the test of time with aplomb.  However, after having seen and experienced some recently launched cars in the segment, the dashboard doesn’t look contemporary and modern anymore. The material on the dash appears and feels rather low rent and the music system doesn’t quite gel well with the rest of the theme.

I twist the ignition key and the engine comes to life rather vocally. The noise emanating from this old 1.4 liter turbo mill is louder than a fresh unit. Diesel clatter, however, is something that you have to get used to if you have decided to own an oil burner – there aren’t any quiet units out there. The A/C compressor noise while the engine idled too was quite loud for our liking. 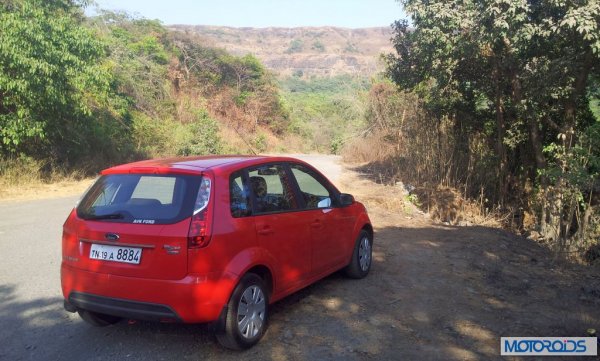 On the move, this 40,000km old powerplant felt good as new. The engine showed no signs of ageing as regards power and torque delivery. The surprisingly linear power delivery of this 1.4 liter unit for a diesel makes city driving a breeze, asking for minimal greashifts and a steady surge from low down the rpm band. I found the clutch a little awkward to modulate at low rpms though, and there were a few inadvertent stalls before I started revving a little more prior to upshifts at slow speeds. The engine still packed ample grunt and trundling speeds without any input from the accelerator pedal could be managed in second gear.

Torque build-up happens at the 1800 mark and it’s at around 2000 rpm that the Figo really gets into its element and surges ahead with great reassurance. Overtaking is a breeze – just dab the right pedal and the car will pass most vehicles ahead of you without the need to downshift as long as you are above 1800-2000 rpm.

The suspension has been assaulted ruthlessly by the media for 40 thousand kilometers, and it shows. As a rule, any media car endures more abuse than a personally owned car. It’s tested ruthlessly on rough surfaces and several drivers, some of whom with no regard for the integrity of a machine torment it for no academic consequence. I would like to think that a personally owned car would fare better in terms of the longevity of the suspension, but the ride quality on the machine we got felt perceptibly deteriorated. The ride quality, as experienced while passing over undulations was thrashier than on a fresh Figo. The road noise too felt more pronounced. The deterioration in the tautness of the suspension seemed to have brought down the ground clearance down a bit and we could hear the belly of the car scraping above some of the more vicious speed breakers. The thuds while passing over overbridge joints was also more audible and observable than on a fresh car. 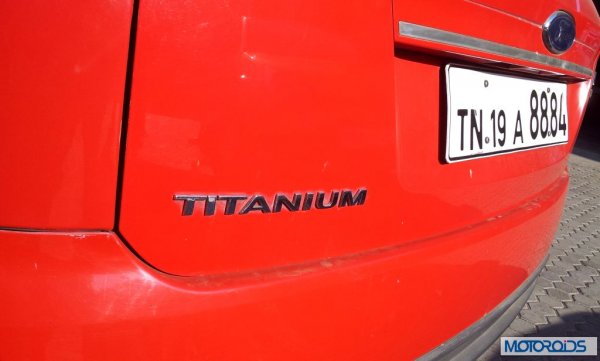 The chunky steering wheel feels nice to hold, and Figo delivers one of the most accomplished driving experiences in its segment. It feels utterly planted on the road, thanks to its long wheelbase and wide track. With its potent Duratorq engine, good steering feedback and above average road holding ability, the Figo is a pleasurable experience to drive around winding roads. We thoroughly enjoyed our 200km long one way drive which comprised of plenty of serpentine roads. The highlight of the drive was the effortlessness with which the car’s engine handled the uphill sections. Even after having logged in so many kilomteres, the engine didn’t feel as if it’s aged a day.  It was dab-and-go, no need to shift down even on steeper inclines as long as you kept the rev needle above 1800 kays – an exceptional virtue in the real world.

On the inside, as mentioned earlier, everything has held together well. From the door handles, to the remote buttons for bonnet, fuel lid and boot, everything functioned without any signs of wear. The instrument cluster delivered accurate info, with distance to empty coming across as a great utility. The only thing I was a little disappointed with was the music system. The radio signal reception and audio quality wasn’t quite on par with the stock systems of some other cars in the segment. Even within the city limits, I could hear a crackling sound even while tuned properly into a channel. Secondly, some of the buttons on the unit felt rather flimsy. The central knob had become very loose and sometimes as I tried to increase the volume, it decreased instead. I wasn’t quite able to pair any phone with the system after repeated efforts and with multiple phones. 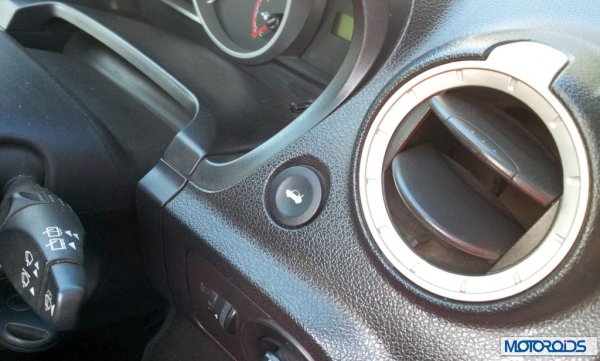 Music system apart, the seat fabrics, the roof trim, the handles and the levers – everything within the cabin and outside has held together well, and feels like it’ll last forever. The engine gave further evidence of its healthy state of being by returning a fuel efficiency figure of more than 17kmpl, even with some really spirited driving, and after negotiating city traffic and some steep inclinations comprising about 80 km of a 400 km round trip. I am more than sure that that the 17kmpl figure can be pushed up considerably if one drives with some restraint and a focus on extracting more juice from the unit.

Ovarall, apart from the low rent music system and the abused suspension (which may not be the case in a personally owned car), we didn’t find anything worth a worry in the vehicle (wouldn’t mind brighter headlights though). Even with 40k on the odo, we couldn’t hear a single squeak or rattle emanating from the body. Maruti Suzuki cars on the other hand, do have a tendency to become a bit more vocal with their bodywork as they age. The AC worked fantastically well even in the searing hot afternoon and we actually had to reduce the fan blast on several occasions. With three aboard, a 17kmpl + efficiency on a diesel, along with a brisk, enjoyable drive would be encouraging enough for anyone to turn more adventurous and take more often to the road.

For a 10,000 km service interval, which would be a little less than a year in most cases, you’ll have to shell out Rs 4500 for a paid service. This would include a replacement of engine oil and oil filter, wheel alignment, wheel balancing, car washing and car cleaning. Quite a reasonable deal for a diesel car we’d reckon, though the service interval could have been a bit longer.

All in all, the Figo, in our opinion is tough product, and is a car to buy if you want something that stays with you for the long haul. A big thumbs-up to the Figo diesel from Team Motoroids!