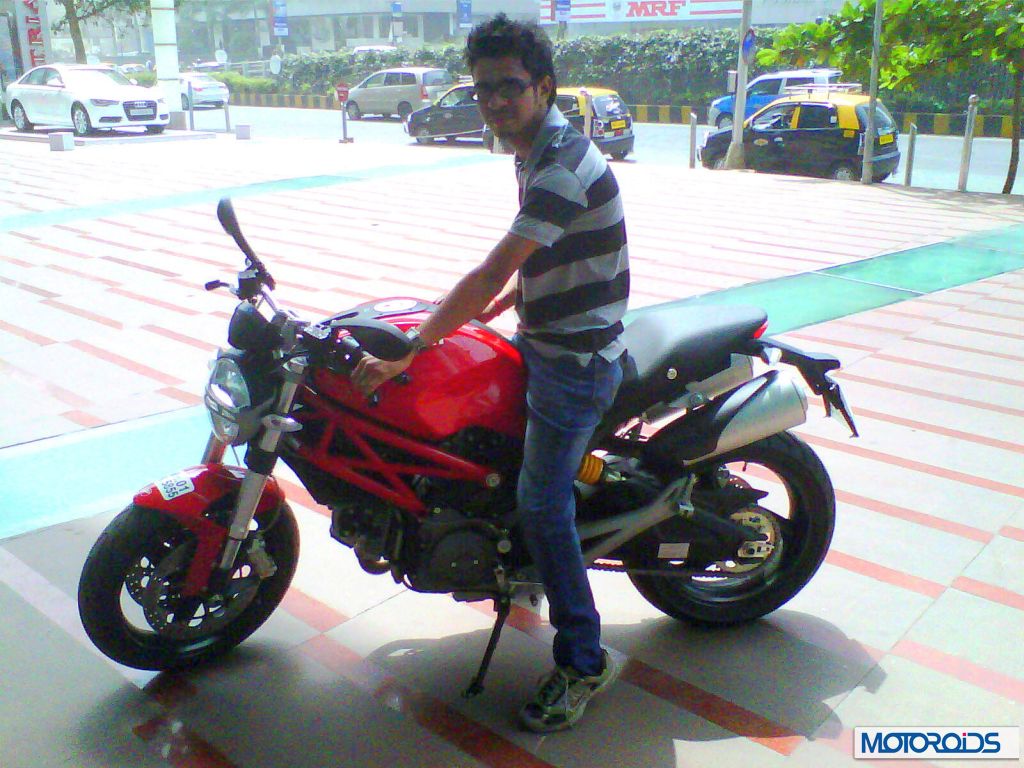 Our regular reader, follower and a sometime, makedo photographer Shekhar Singh has been daydreaming about riding a Ducati 795 for some time. Our man has been going weak in the knees at the very mention of the new machine. Recently, he realized his wet dream when he got a chance to  ride the tasty motorbike. He spent some quality time with the cut-price Monster 795 in Mumbai. Here on, this story will talk about what Shekhar feels about this piece of art. 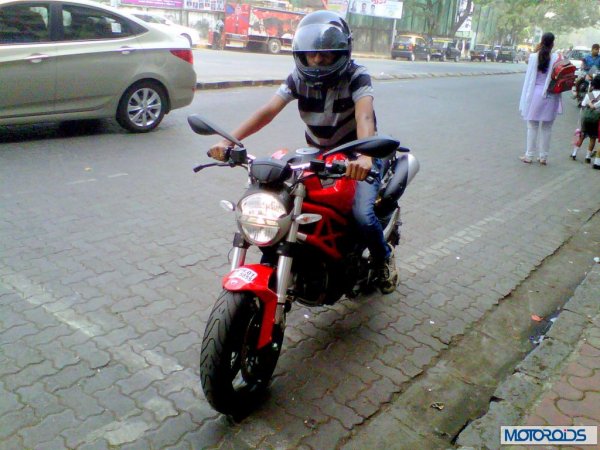 Not long back, Ducati decided to spoil our country silly and introduced the 795 Monster at a price that left many bouncing with excitement. On sale at a price of about INR 6 lakhs, the 795 is an easy way to get into the Ducati family. Someone who knows his bikes will surely pick a 795 over the lesser imported bikes on offer. Basically, this mid-range street bike is a hybrid of two models. The 795 is an amalgam of 796’s power in a body of 696, what with 795 coming with an engine of 796 and a chassis of 696. The fact that both the 796 and 696 are more expensive than 795 makes the deal even sweeter. 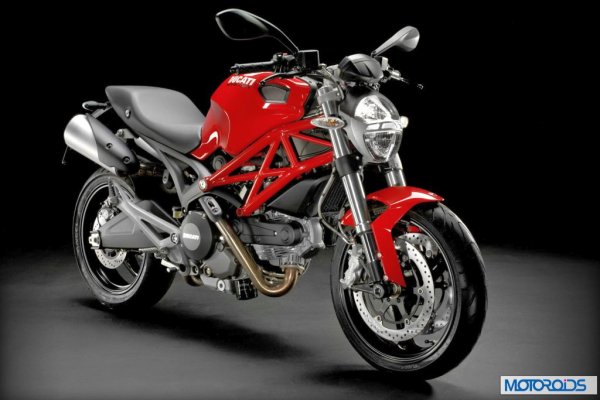 Like with every Ducati bike, the beauty of 795 lies in the red paint and the Trellis frame. Combine this with an upswept exhaust, inverted front forks, muscular tank and brake discs the size of rims of an Indian bike and there is no denying that the money and the popularity this bike commands is well justified. This bike has not the fairing as seen on those ‘wannabe litre class’ 600s but the round headlamp goes on well with that very macho and monstrous image of the Monster. While the handle bar does not threatens to touch the ground and isn’t the low set clip ons of a race bike, it isn’t the BSA cycles kind of handlebar seen on the Karizma either. The stylish tail piece, twin end cans on either end of the bike and the fat rear tyre will let the road users know that a no ordinary bike passed them when you overtake them on the street. 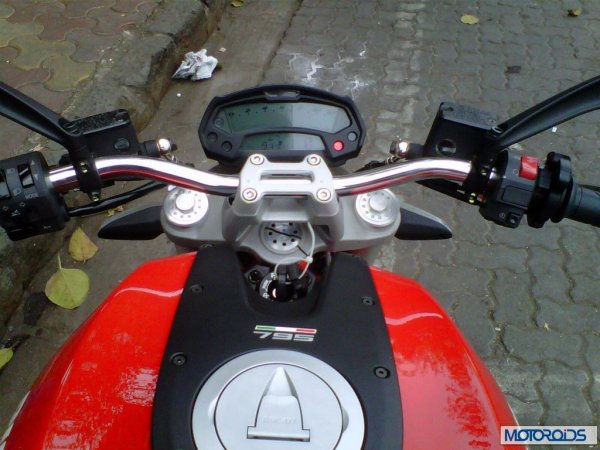 For someone who rides his R15 and our friend Yatharth’s Pulsar 220 on a regular basis, this 167 kg Monster (pun intended) surely feels a tad on the heavier side. However, 167kgs from a bike displacing 803cc is not at all on the heavier side. It took me merely 5-8 kms to get used to the bulk under my legs. The handlebar again comes into mention as it is very much unlike those low set clip ons on the faired bikes and are not positioned low enough for you to get intimate with the tank. The seat is very supportive and holds you in your place even when going into the corners. The bike comes with a retro styled hexagonal speedo console that is an all digital affair. While the readout looks cool, slightly bigger fonts would have helped. 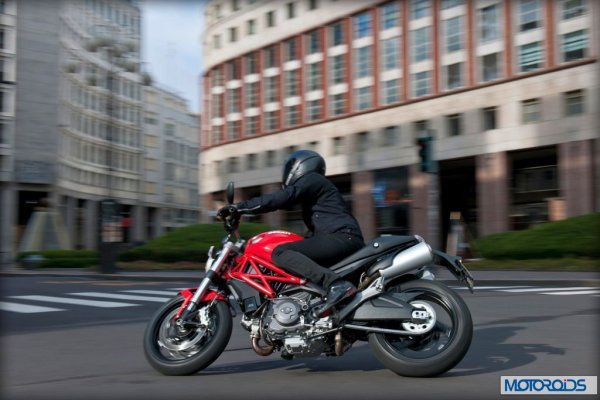 The Ducati Monster 795 comes with a 803cc L-V Twin engine that pumps out a healthy 87 horses. As I mentioned earlier, this mill is borrowed from the bigger and costlier Ducati 796 and this motor alone lets the rider know that he astride some serious machinery. The engine is smooth in nature and hardly lets you know of the eagerness of all those horses on their duty. The only noise you can hear is that of the wind and that lovely exhaust note. The bike has a 6 speed gearbox and the motor and the box are so well mated that it feels like it is a marriage made in heaven. All that power and the creamy torque is very flexible and I remember the bike being in third gear when I saw 130 kmph on speedo and 3500 RPM on the rev counter. This goes on to say about what a mile muncher this bike can be on our highways. 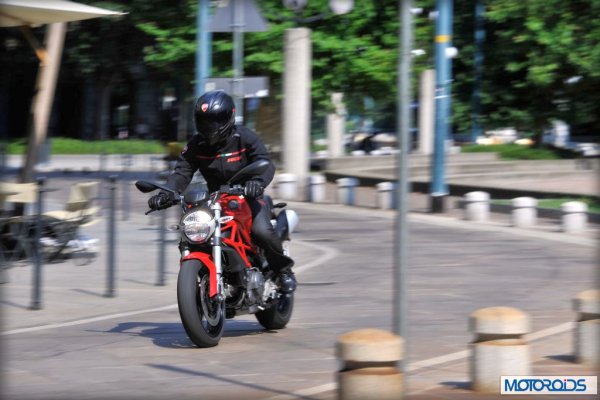 The bike comes with 120/60 (front) and 160/60 (rear) tires on 17 inch wheels and these feel pretty adequate for the bike. The tires are from Pirelli and stick to road pretty well. The tires also help a fair bit in giving this bike some serious braking capabilities. Talking about the brakes, the Ducati Monster 795 comes with twin disc set up front and a single disc at the rear. The anchors on the bike are courtesy Brembo and they can bring the bike to a standstill from high triple digit speeds the very moment you press the brake levers. Talking about the handling, before I begin singing songs of praise about this bike, I might add that I never pushed the bike hard owing to it not belonging to me. That said, the bike, as said, stick to the tarmac and moderate leans are something that the bike can have for breakfast. The ride quality from a bike like this was not expected to be anything like that of the Karizma but the bike again impresses by taking most of the average sized craters in its stride without a problem. 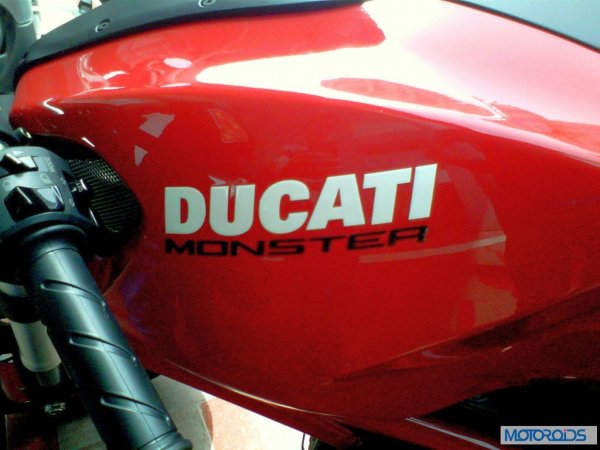 A good amount of the day I spent on this red hot Italian beauty passed by in what seemed to be like a matter of 5 minutes. The Monster 795 is a logical bike and is much easier to tame on our roads than those 600cc faired bikes. At a price of INR 6 lakhs, the bike is on the top of my wish list and appears to be as a much more interesting proposition than say…a Honda City. After riding the most affordable Ducati on sale, I can proudly say that the marquee deserves all the love I have for it. Those few hours on the 795 will be one of the most well spent of my life. This bike felt more practical yet more powerful and eager than the Korean GT650R I recently rode and it is no surprise that the 795 has gained all that popularity in India in no time at all. Now, my next wish- A date with the sizzling hot 1098. Stay tuned guys.